Dr Jesper W. Gjerloev – Earth Interactions With Space – Do We Finally Understand Them?

Space scientist Dr Jesper Gjerloev and his colleagues at the Johns Hopkins University Applied Physics Laboratory in Laurel, Maryland, are part of a world-wide consortium of scientists studying the Earth’s interactions with near Space. 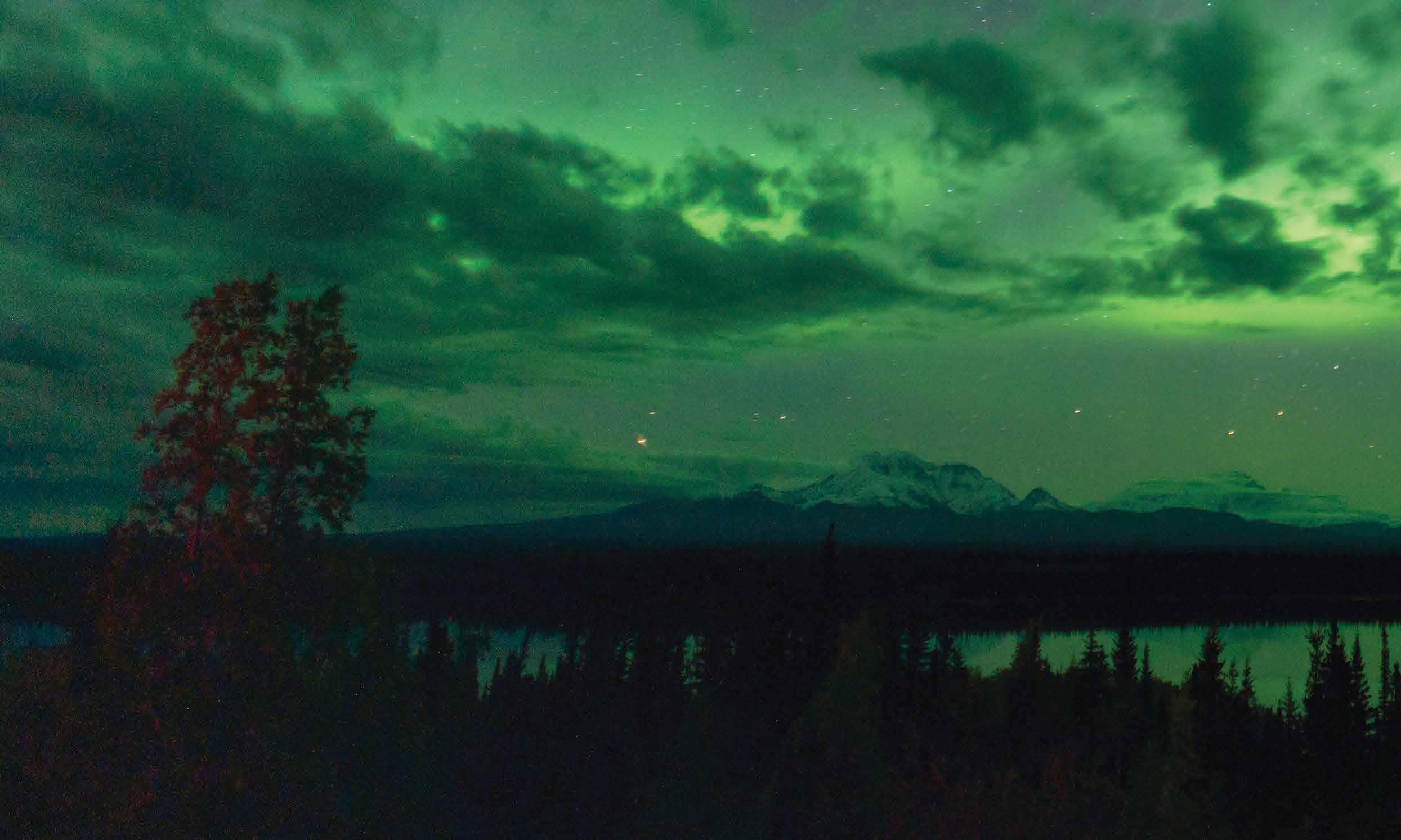 Due to its outer core of liquid iron, our Earth has a magnetic field that projects into the nearby surrounding space. Not only does this magnetic field affect such things as compasses, allowing explorers to determine direction, but it also interacts with the solar wind – streams of charged particles ejected from the Sun that bombard our planet. These particles are neither solid, liquid nor gas, but plasma – a fluid that consists of highly energetic ions. The conditions inside the Sun are so extreme that positive and negative ions move too fast to join together to form neutral molecules. Instead, they simply blast through space with their own intrinsic positive or negative charge. 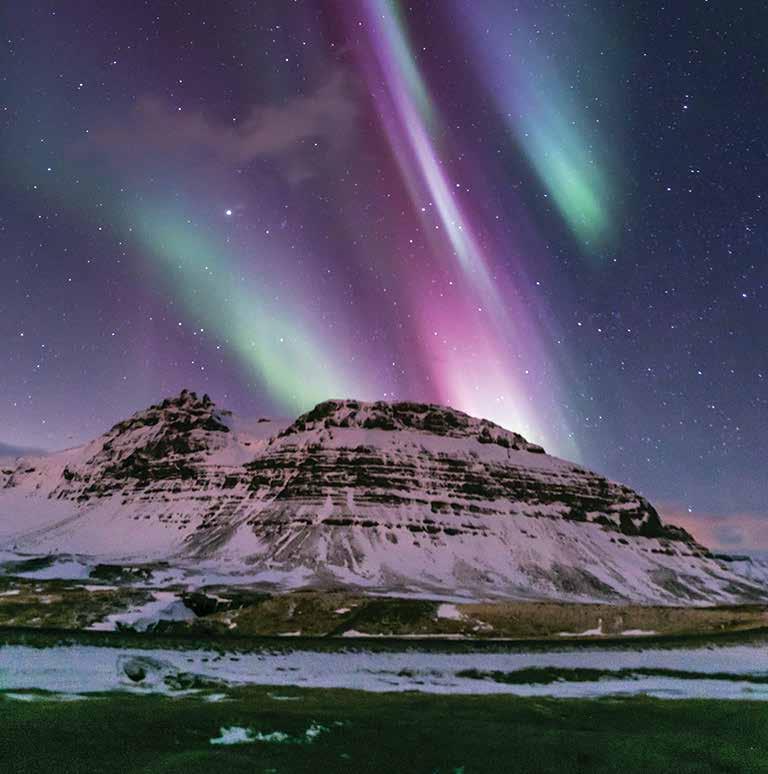 A Long and Winding Road . . . Ending in Space

Dr Gjerloev began his university studies in something seemingly more practical than space physics – engineering. However, he tells Scientia: ‘After six months I realised that everything I was interested in and questioned the engineering professors about was dismissed as not important. Thus, I changed to physics at the University of Copenhagen and felt at home immediately.’ His plan initially was to study earth physics, but in his third year he finally joined an earth physics class and actually found it boring. Just by luck, he took a class in space physics and was instantly hooked. As he remembers it: ‘I asked so many questions the other four students got pretty annoyed with me, but I found the concepts absolutely fascinating.’ He ultimately asked the professor if he could write his master’s thesis on the topic of space physics. Although he was the first student for many years that had requested that topic, allowances were made. Perhaps it was not exactly the most sensible choice in terms of a career – after all, how much money is there in space? – but Dr Gjerloev felt there was no choice, since his eyes were now turned to the stars. Unfortunately, he won his Ph.D. funding at the engineering university – back where he didn’t want to be. Luckily, after a year they sent him, of all places, to NASA-Goddard Space Flight Centre where he fit right in and stayed, focusing his doctoral thesis on auroral electrodynamics. His career direction was thus cemented.

‘I have spent time developing systems that allow global and continuous coverage of this system.’ One of those ‘systems’ that Dr Gjerloev founded and leads is called SuperMAG. 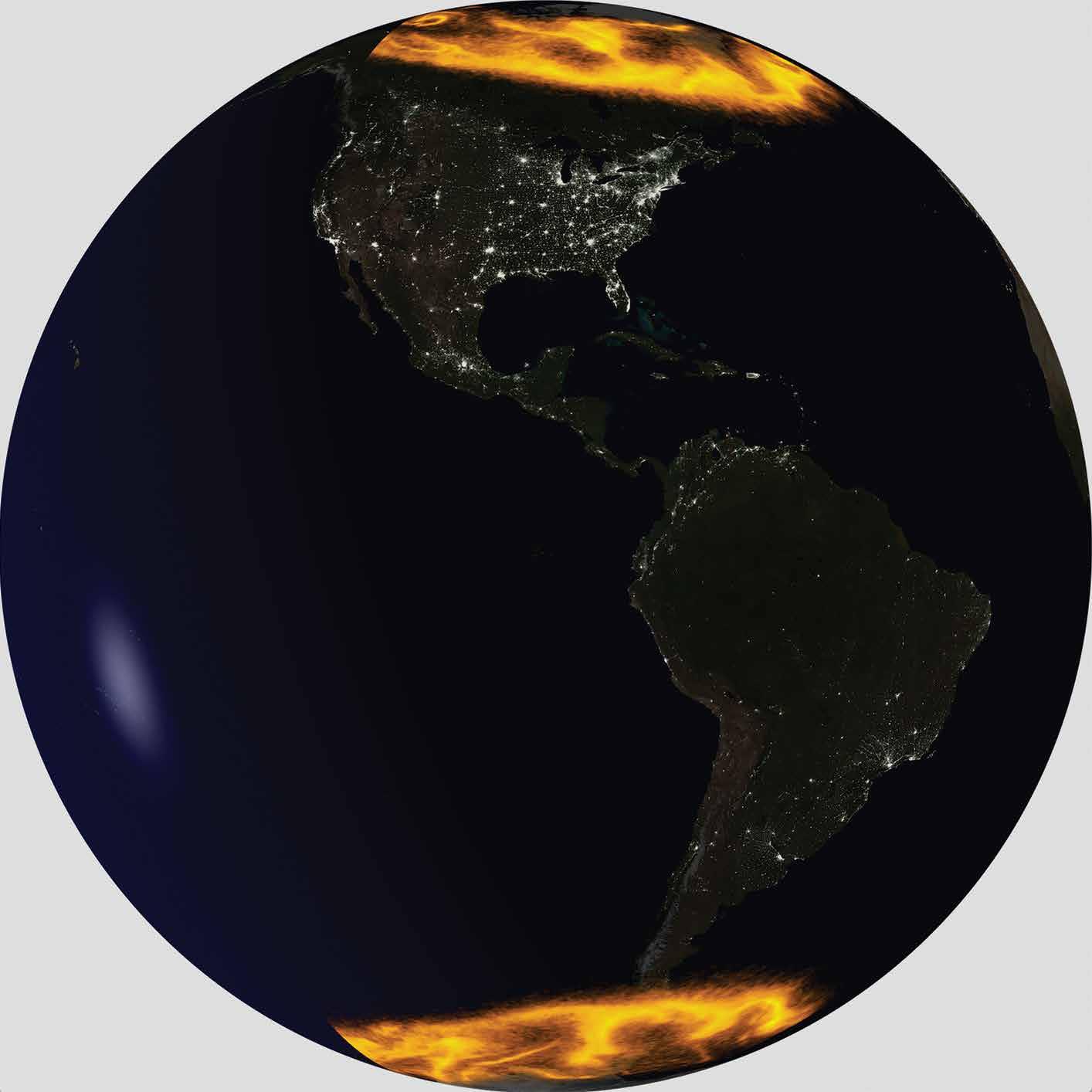 On December 15, 1832, the German mathematician Carl Friedrich Gauss presented a paper before the Göttingen Royal Scientific Society about a new instrument he had devised to calculate an absolute value for the strength of the Earth’s magnetic field. The instrument could do this by suspending a bar magnet from a gold fibre and measuring its oscillations when it was magnetised and not magnetised. He had constructed a magnetometer. Soon after, other types of magnetometers were invented and centres proliferated around the world, measuring the Earth’s magnetic fields here and there and making scientific pronouncements on many scientific issues. But as Dr Gjerloev tells Scientia, ‘These magnetospheric interactions are global and highly dynamic.’ Thus, a scientist measuring magnetospheric phenomena in, say, Berkley, California, will measure different magnetic results than scientists from Lancaster in the UK or from Moscow in Russia. The ‘big picture’ of the Earth’s magnetic activity would actually be a correlation of the data from many independent magnetometer sites from around the world, reconstructing a dynamic three-dimensional picture of the Earth’s magnetic activity. But even as more and more universities and other organisations put together magnetometer centres to study these issues, the problems of collecting data from diverse and distant centres became obvious.

Global magnetometer studies that use observations from observatories throughout the world are inhibited or even prevented by a number of complications. First, the data has to be collected and correlated properly. Second, we must isolate the contributions to the measured magnetic field which are due to the electrical currents flowing between the Earth and space. This is done by carefully subtracting the Earth main field and local magnetic effects – such as from local metal deposits – from the measured field. Thirdly, all centres must use the same coordinates, both spatial and temporal. In other words, everyone has to use the same ‘map’ of the world and their clocks must be perfectly synchronised. Finally, artefacts and errors must be accounted for.

To solve these problems, as well as to make the data from magnetometer centres available for others besides the scientists involved in the data collection, Dr Gjerloev and like-minded scientists developed a new system called ‘SuperMAG’, a global collaboration of organisations and agencies that operate more than 300 ground based magnetometers. SuperMAG is conceptually a Facebook or iCloud for magnetometer centres. It provides a collection and correlation system to give easy access to validated ground magnetic field perturbations in the same coordinate system, identical time resolution and with a common baseline removal approach. This system allows scientists, teachers, students and the general public to log on and have easy access to measurements of the Earth’s magnetic field all in the same ‘language’. And Dr Gjerloev is the principal investigator of the SuperMAG collaboration.

‘The social impact of the solar windmagnetosphere- ionosphere system is increasing as we become increasingly dependent on space-born assets as well as many other technological systems that are affected.’ 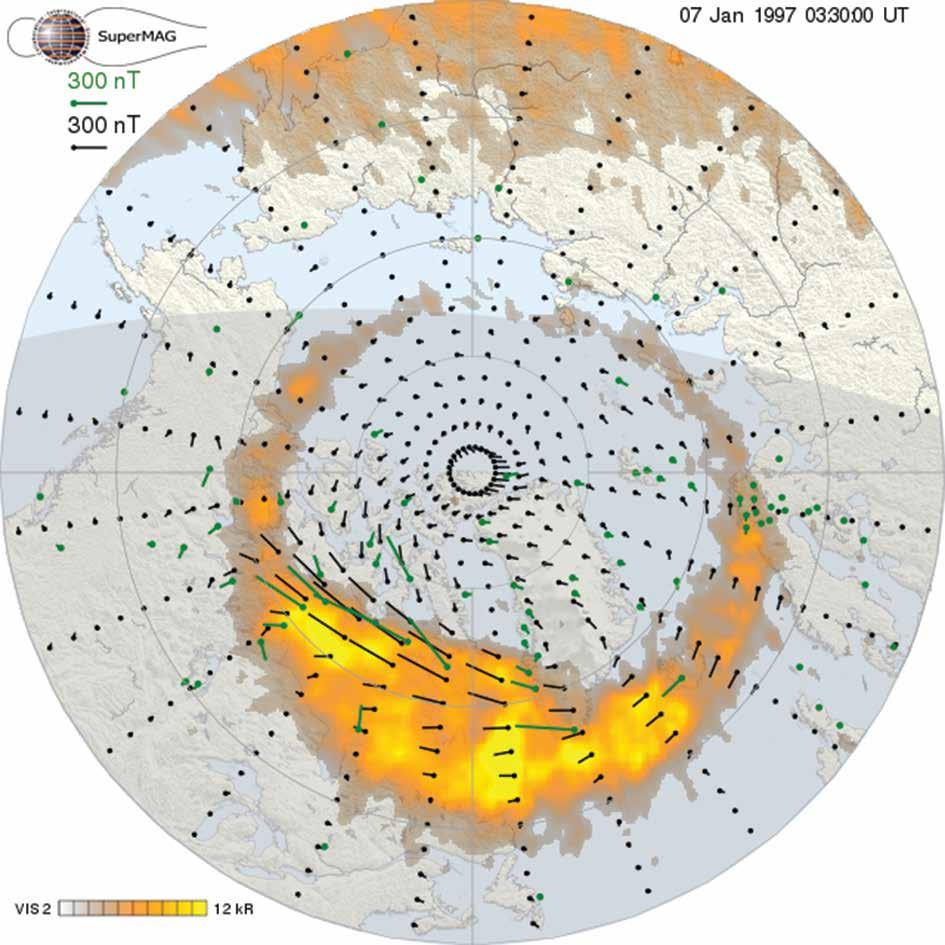 Getting the World Together

How do we understand how currents transfer momentum and energy to and from the ionosphere and find the link between the dynamic multi-scale current filaments and the complex auroral display? Electrical currents are fundamental to the interaction between a magnetised body like the Earth and the surrounding space plasma. Such currents represent the dominant mechanism of momentum and energy transfer. Terrestrial currents mediate the motion of enormous volumes of magnetospheric plasma rushing earthward. With faster rotating planets, such as Jupiter and Saturn, scientists have seen that extensive regions of heavy plasma encircling the planets are swept up and accelerated by these currents to the planetary rotation rate, ultimately forming giant magnetodiscs. Dynamic currents of multiple scales – whose complexity is visually manifested by magnificent aurorae – communicate the momentum and energy exchange between the distantly separated magnetosphere and the ionosphere.

Aurorae are the lower manifestation of an enormous system of electrical currents flowing in space along the planet’s magnetic field lines. These field-aligned currents (FACs) or ‘Birkeland currents’ are now known as the primary means of energy and momentum transfer between the magnetosphere and ionosphere. FACs couple the two into a single electrodynamic system held together by complex electric and magnetic fields and the mutual exchange of plasma. In a long list of articles, Dr Gjerloev and co-workers promoted the idea that the aurorae provide a natural reference frame to organise measured electrodynamic parameters. Without imaging, the observations are made blindly, without an understanding of what phenomena the observations are related to.

Because simple statistical treatment of this type of data tends to smear out the very features of interest, and insight into the underlying physical processes is limited, Dr Gjerloev and his team have recently published the first analysis of substorms using dynamical networks obtained from the full available set of ground-based magnetometer observations in the Northern Hemisphere. They essentially constructed a network – like Facebook or LinkedIn – linking magnetometer data from more than 100 sites and determined patterns and global behaviour. Their results were surprisingly promising and indicate that dynamical network analysis has the potential to quantitatively categorise space weather events.

However, the team’s work is not over yet. As Dr Gjerloev wistfully says: ‘Space physics as a discipline that is in its infancy. Processes viewed as fundamental for the system are still not completely understood because of limited observational support.’ There are just too few data points yet and much is still to be discovered and understood. This is partly due to the massive range of scale sizes that play a role, as well as the complexity of the system.

Where Do We Go from Here?

Going forward, Dr Gjerloev faces a number of difficulties. He believed he has two main hurdles to overcome. ‘First, the social impact of solar wind-magnetosphere-ionosphere science is increasing as we become increasingly dependent on space-born assets as well as many other technological systems that are affected’ he explains. In other words, the more satellites and space stations we have in orbit – technology we depend on for communication and other vital services – the more imperative it is that we know how the magnetosphere-solar wind dynamics affect those delicate electronics. Secondly, there’s always the issue of scientific curiosity. Despite decades of research, Dr Gjerloev says that ‘we are still at the infancy in our understanding of the system.’ One obvious problem is our inability to make predictions. The whole magnetosphere-solar wind system is highly complex, dynamic and structured, in addition to being heavily under sampled. While the northern hemisphere is well-covered with magnetometers, the Earth’s southern hemisphere has notable gaps in coverage. ‘As a result, the field is left with simplistic models and quasi-religious beliefs,’ says Dr Gjerloev. Instead of falling into the political chaos that has swallowed the climate change controversy, Dr Gjerloev wants his science to be based on data – data collected worldwide, correlated and calibrated – that even school children can access and study it. 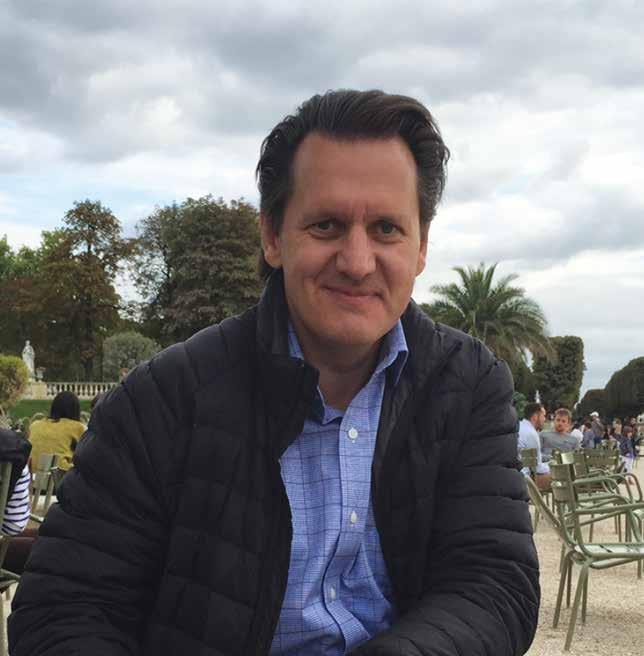 Dr Jesper Gjerloev received his PhD in Space Physics from the Technical University of Denmark, Lyngby, in 1998. His doctoral thesis focused on auroral electrodynamics from work performed at NASA-Goddard Space Flight Centre in Maryland in the USA. In 2003, Dr Gjerloev joined the Senior Professional Staff at the Johns Hopkins University Applied Physics Laboratory where today he is the Lawrence R. Hafstad Fellow. He is also Adjunct Professor in the Department of Physics and Technology at the University of Bergen, Norway. Dr Gjerloev’s research interests focus on space science, in particular the coupling of the Earth’s magnetosphere and ionosphere and its relationship to space storms and aurorae. He founded and is the PI of SuperMAG, a worldwide collaboration of organisations and national agencies that currently operate more than 300 ground based magnetometers to collect data on the Earth’s ground magnetic field perturbations. 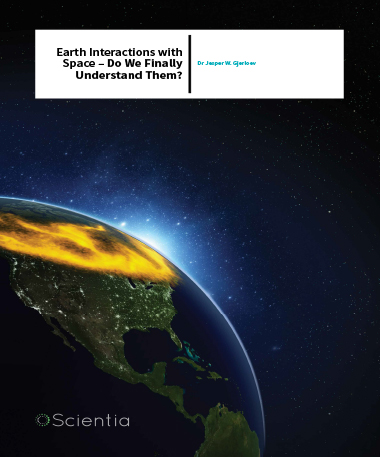