Professor David Sugden, Dr Andrew Hein and Professor John Woodward have combined their complementary expertise to shed light on the stability of the West Antarctic Ice Sheet during previous interglacial periods. Knowing how ice sheets have behaved in the past enables us to better predict the degree of ice melt and sea-level rise in the future.

Ice Sheets in the Antarctic Interior

The dramatic loss of ice from floating ice shelves, due to the warming waters of the Pacific Ocean, has been the subject of much recent study. However, the precise impact of global warming on the interior of Antarctica is a major unknown. This is important to understand, because if the West Antarctic Ice Sheet were to completely melt it would contribute directly to a rise in sea level of around five metres.

To gain insight into the past behaviour of this massive ice sheet, Professor David Sugden, Dr Andrew Hein and Professor John Woodward, and their teams at the Universities of Edinburgh and Northumbria, gathered evidence from three locations in the southern Ellsworth Mountains. The team’s data served to determine if the West Antarctic Ice Sheet, half of which flows into the Weddell Sea, remained relatively stable or retreated significantly during past interglacial periods, such as at 130,000 and 205,000 years ago, when the world was warmer than at present.

To measure past fluctuations in the West Antarctic Ice Sheet, the team went into the field to date surface boulders and landscapes carved by glaciers. They used geomorphological field observations linked to a technique that calculates how long rocks had been free from ice cover, to track changes in ice flow during ice age cycles, over millions of years. This new data complemented that obtained from satellites, climate modelling, models of past and future ice sheet evolution, and marine biological evidence suggesting the possibility of interglacial seaways in West Antarctica during interglacial periods. 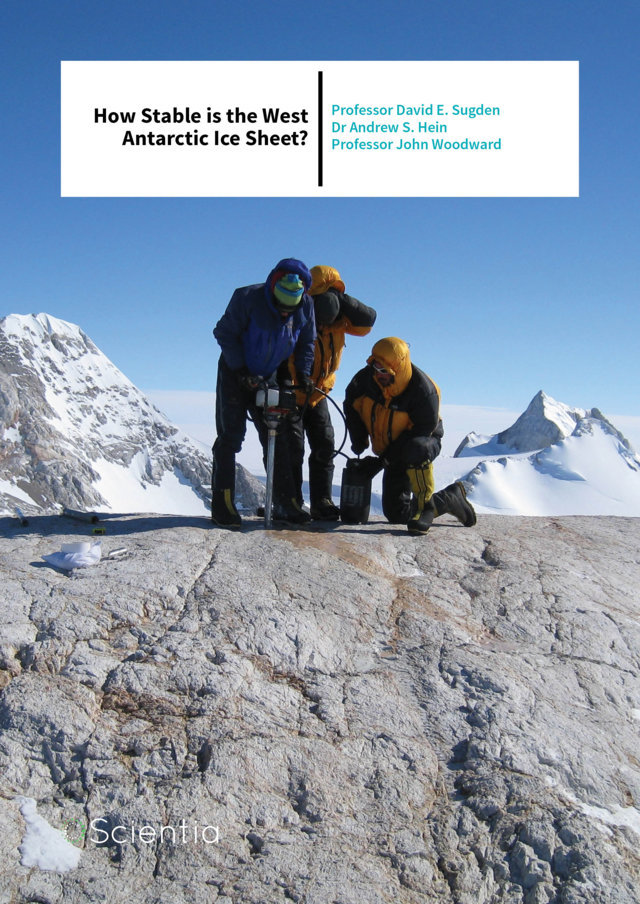 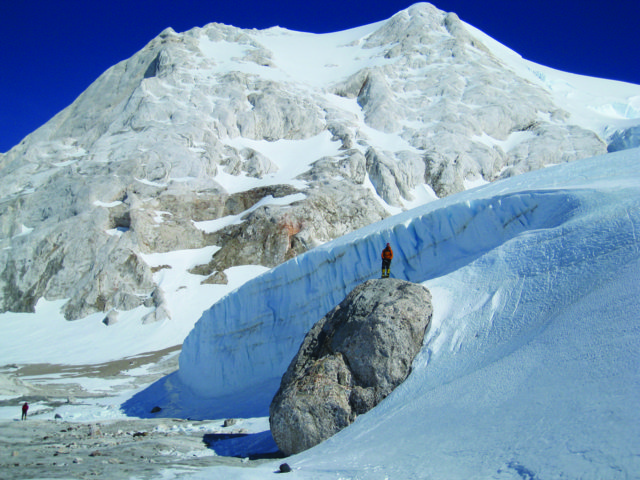 ‘I walked on a glacier in Norway at the age of 16 and was hooked on glaciers and the magnificent landscapes they create. I became a Physical Geographer at that point,’ says Professor Sugden, of the University of Edinburgh. ‘I have worked in different parts of Antarctica for 15 seasons. It is humbling but magnificent to see mountains as far as the Earth’s curvature allows, to see the changing light as the sun dips and circles round the sky in 24-hour daylight, and to hear the silence of a world with no running water or people.’ 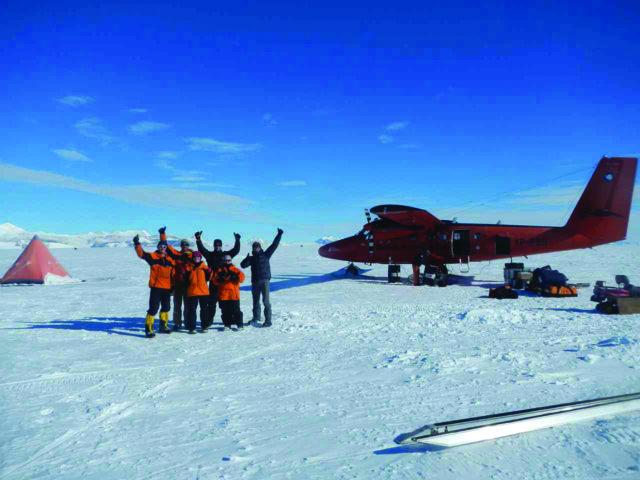 His colleague Dr Hein manages the Cosmogenic Nuclide Laboratory at Edinburgh University, and brought field and laboratory experience of exposure dating techniques to the team. ‘Mountains protruding through the ice are used as dipsticks of changing ice surface elevation. We mapped the distribution of boulders dropped by the ice on the mountains and dated them using cosmogenic isotope dating,’ explains Dr Hein. ‘Cosmic rays bombard the earth surface, leading to the accumulation of cosmogenic isotopes in surface rocks. Measure this and you can show how long a boulder has been exposed and sometimes how long it has subsequently been buried by ice.’ By measuring different isotopes of several rare nuclides in exposed rocks, the team are able to reconstruct a detailed history of ice elevation changes.

A Professor of Physical Geography at Northumbria University, Professor Woodward is a specialist in glaciology and an expert in the use of radar to study glaciers. One of his key research interests is the use of glaciological and geophysical evidence to investigate subglacial lakes and ice/sediment/water interactions at the glacier bed. The West Antarctic Ice Sheet is potentially vulnerable because its 2,000-metre-high central ice dome overlies a marine basin with a depth of 1,500 metres below sea level. The risk is that, as warming oceans melt the floating margins and the ice sheet thins and retreats, the interior ice sheet will be affected above this marine basin. ‘It is possible that the ice sheet has passed the point of no return and, if so, the big question is how much will go and how much will sea levels rise,’ says Professor Woodward. 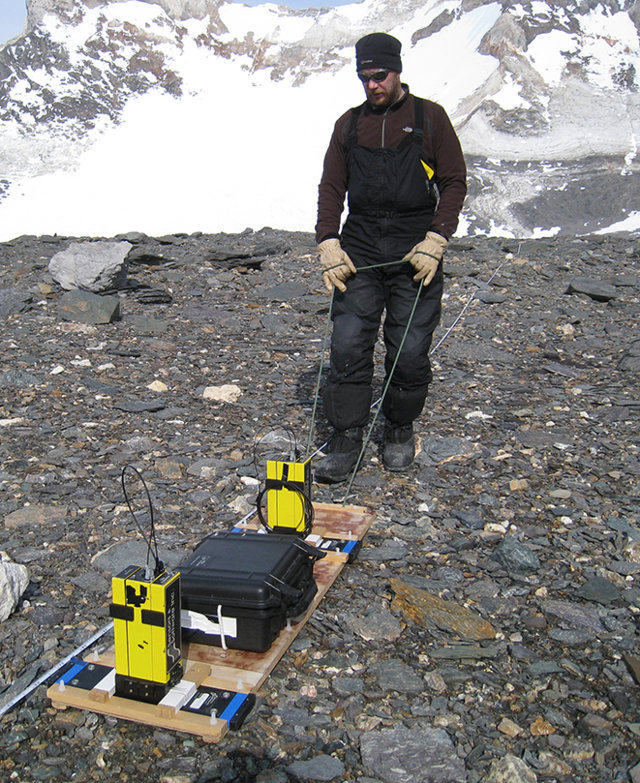 The team of scientists reached their field camp, in the southernmost edge of the Ellsworth Mountains, in a Twin Otter aircraft flown from the British Antarctic Survey’s Rothera Research Station. Once in the mountains, they spent two-and-a-half months in small tents, while collecting data using skidoos to get around – the furthest field site being a gruelling 40 km round trip. One trip back to Rothera took two days, stopping off at a half-way runway due to changing weather conditions.

‘There is something about living in a tent surrounded by such splendour, and potential danger, and reliant on your own capabilities and those of your companions. I have been so fortunate to be able to combine such experiences with my university life,’ Professor Sugden tells Scientia.

In a paper published in Nature Communications in February 2016, Professor Sugden, Dr Hein, Professor Woodward, and their colleagues, reported the first field evidence to be used to constrain models of the West Antarctic Ice Sheet during previous warm interglacial climates. ‘Our findings suggest that in the southern Ellsworth Mountains katabatic winds have been blowing down the ice sheet surface persistently for 1.4 million years,’ explains Dr Hein. ‘This means that an upland ice sheet has been present continuously for at least this time and survived previous interglacial periods when the world was warmer than present.’

‘West Antarctica has undergone complex changes since the last Ice Age, and it quickly became unstable – similar processes may dominate the future of the region in a warmer world’ – Dr Hein 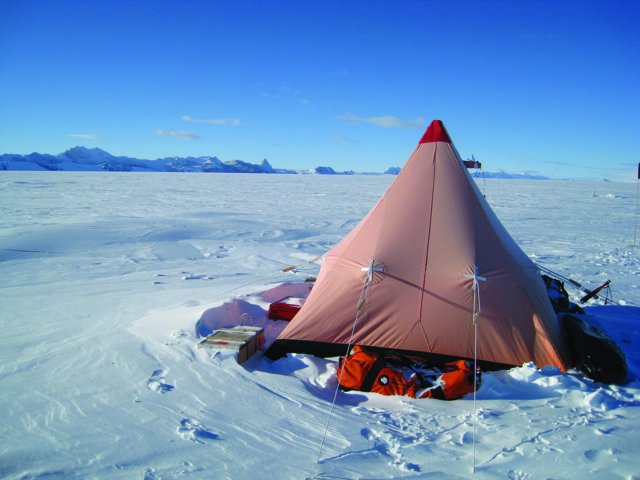 Evidence from the Blue-Ice Moraines

The team focused on blue-ice moraines, created by strong downslope winds, where boulders and other debris (moraine) have been bought to the surface. These blue-ice moraines were studied through geomorphological methods, such as 3-D laser scanning, Differential Global Positioning Surveys (DGPS), and ground-penetrating radar, to determine ice thickness, and the exposure-age dating of boulders.

‘The study of ice-sheet evolution is like a detective story,’ says Professor Sugden. ‘You compare observations on the ground with theory and painstakingly build up a narrative of how the ice sheet has evolved to its present state. Each field campaign takes you further but raises more questions. Our focus on blue-ice moraines is such an example.’

According to Professor Sugden, blue-ice moraines are somewhat of an enigma. As snow accumulates on the ice sheet surface, rock debris should become buried. However, blue-ice zones occur where downslope katabatic winds have eroded the surface snow, and ice has migrated upwards to compensate for this loss, bringing debris to the surface. Since some of this debris has been at the surface for millions of years, its study can open a deep window into the history of an ice sheet.

Another paper from the team, published in Nature Communications in August 2016, focused on what their field data revealed about the thinning of the ice sheet in the southern Ellsworth Mountains during the most recent Ice Age, peaking some 21,000 years ago. The team found that as the Earth warmed, the West Antarctic Ice Sheet close to the Weddell Sea remained covered with ice long after other parts of the Earth were emerging from the Ice Age. Eventually, a tipping point was reached, after which it thinned relatively quickly, losing 400 metres of thickness in 3,000 years, causing global sea levels to rise by up to two metres.

‘West Antarctica has undergone complex changes since the last Ice Age, and it quickly became unstable – similar processes may dominate the future of the region in a warmer world,’ Dr Hein says. 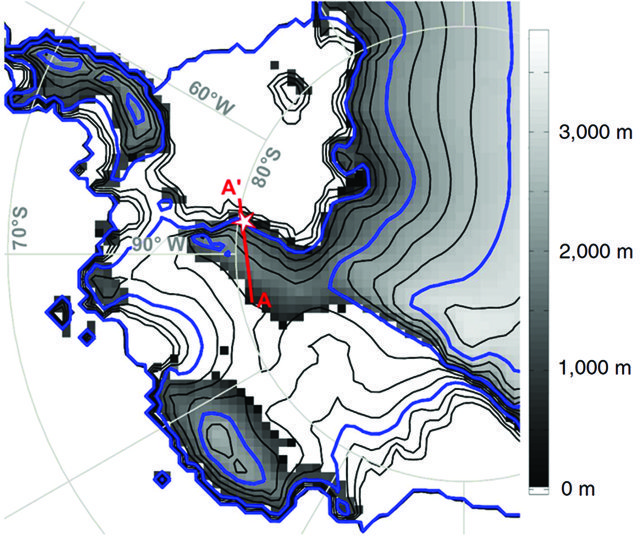 In addition to blue-ice moraines, the team’s other main focus was looking at how glaciers have cut into the landscape, to leave an erosional trimline (a sort of high-tide mark) in the exposed peaks of the Ellsworth Mountain range. These glaciated surfaces can be dated where they are overlain with surface deposits. ‘We have discovered a much longer history than we expected at the outset; indeed, some ice-scratched surfaces may be 14 million years old,’ believes Professor Sugden.

In a paper published in Earth and Planetary Science Letters in 2017, the team presented evidence showing how the glacial trimline evolved up to 14 million years ago – when the Earth was 20°C warmer than present and vegetation grew in the Ellsworth Mountains, in a climate that would have been similar to that seen in Greenland or Patagonia today. This study was among the first to find evidence of how the ice sheet would have looked at this time in West Antarctica. The extreme age of the elevated trimline suggests that subsequent fluctuations in ice thickness have progressively been confined to lower elevations, as a result of deep troughs being eroded beneath the glacier, lowering the ice surface relative to the mountains.

‘It is possible that the ice sheet has passed the point of no return and, if so, the big question is how much will go and how much will sea levels rise’ – Professor Woodward 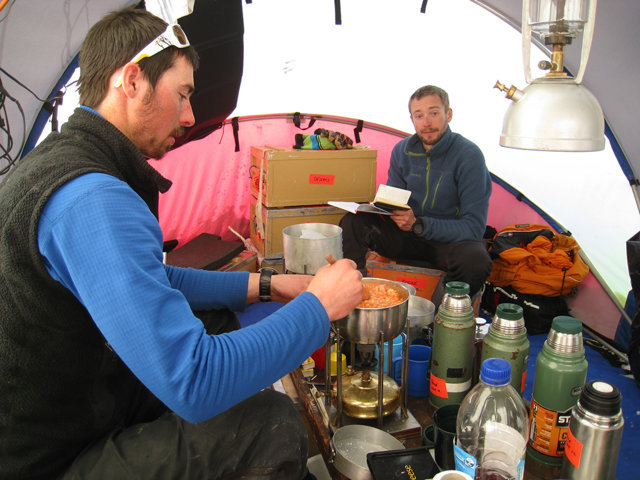 Field evidence collected by the team over several seasons showed that during warmer interglacial periods, the West Antarctic Ice Sheet retreated, but at its lowest point it formed regional ice sheets on three mountain blocks, of which the Ellsworth Mountains were one, with marine seaways in between. Although the team found no evidence for complete deglaciation (and therefore sea level rises of at least 5 metres), the most likely scenario is that the considerable melting of this ice sheet would have raised sea levels by around 3.3 metres. Therefore, the team suggest that we should be planning for an additional 3 metres of sea level rise from the West Antarctic Ice Sheet alone if global temperatures keep climbing unchecked, with considerable implications for coastal populations around the world.

‘These findings help us understand how the Antarctic Ice Sheet has evolved, and to fine-tune our models and predict its future,’ concludes Professor Sugden. ‘The preservation of old rock surfaces is testimony to the stability of at least the central parts of the Antarctic Ice Sheet – but we are still very concerned over other parts of Antarctica amid climate change.’ 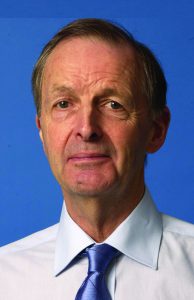 After receiving his DPhil from the University of Oxford in 1965, Professor David Sugden worked for the British Antarctic Survey and held Lectureship positions at several universities, including the University of Colorado and the University of Aberdeen. At the University of Edinburgh, UK, he has been Head of Geography (1987–1992, 1997–2000), Head of the School of GeoSciences (2003–2006), and is currently Professor Emeritus. His research interest is to understand how ice sheets behave and interact with the Earth’s systems, by linking glaciology with landscape studies in geomorphology/geology and exploring the role of geomorphology in shaping the evolution of the Antarctic Ice Sheet. 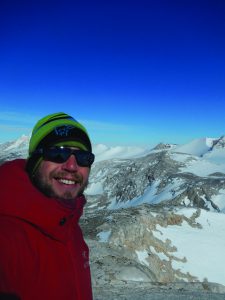 Dr Andrew Hein was awarded a BSc in Geology from Western Washington University (USA) in 1996, and a MSc (2004) and PhD (2009) from the University of Edinburgh, UK. His PhD thesis on Cosmogenic Nuclide Analysis and Glacial Geomorphology involved mapping the extent of the Patagonian Ice Sheet during the Last Glacial Maximum and the pattern and timing of its decay. After periods of post-doctoral work dating glacial dynamics, in 2012 Dr Hein became a Chancellor’s Research Fellow – a position that involves him managing the University of Edinburgh’s Cosmogenic Nuclide Laboratory. 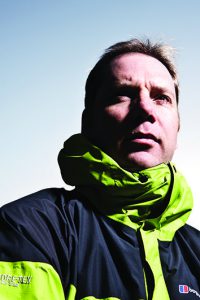