Dr Daniel Jones, Chief Science Officer of Chirp, and his colleagues have developed a technology that enables fast, effortless and cheap data transfer using the power of sound waves. Chirp’s data-over-sound technology has been used in numerous applications for wireless communication, spanning sectors from children’s games to industrial powerplants.

Vibrating objects generate sound waves that can travel through gas, liquid and solid mediums. Actions that generate sound energy, such as ringing a bell, cause particles in the air to vibrate, resulting in small fluctuations in air pressure. These air pressure fluctuations propagate, as the vibrating air particles collide with neighbouring particles, which then also start vibrating. Collectively, this travelling disturbance in air pressure and particle vibration is referred to as a sound wave. When sound waves reach the ear, they cause the eardrum to vibrate, initiating a neural impulse that is interpreted by the brain as sound.

Sound waves always require a medium to travel through, and thus cannot propagate in a vacuum. One important property of a sound wave is its frequency, which describes how quickly the wave’s air particles are vibrating. Higher frequency sound waves, which cause the air particles to vibrate faster, are picked up by our ears as higher pitched sounds – if within the audible range of frequencies that can be detected by the human ear.

When it comes to transmitting data between devices, the traditional choice is radio waves – a type of electromagnetic radiation, along with visible light, x-rays, microwaves, etc. Rather than involving vibrating gaseous, liquid or solid particles, electromagnetic radiation can be described as electric and magnetic fields vibrating together in space. Wi-Fi and Bluetooth both operate through radio waves, and in order to use these technologies, devices must contain chips that can transmit and receive radio frequencies. Such devices are referred to as ‘enabled’ for Wi-Fi and Bluetooth, and their use can often be difficult due to the setup and pairing processes required. 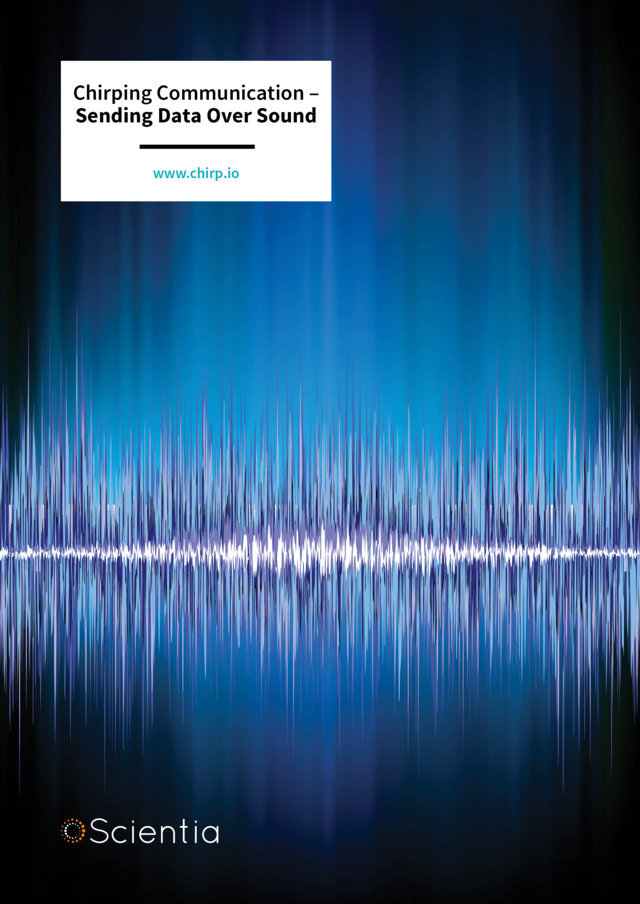 ‘Using sound has been a powerful way of communicating data since the earliest days of telecommunications, from telegraphs and Morse code to dial-up modems. The difference is that we have developed algorithms that work “over the air”, in noisy and acoustically challenging environments.’ 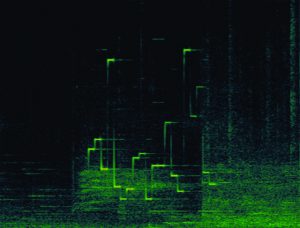 Because Chirp uses sound waves rather than radio waves, the technology offers a convenient approach to transferring data, and can be integrated into many existing devices, as it only requires a speaker in the sending device, along with a microphone and a small amount of processing power in the receiving device. Chirp’s technology offers many advantages over Wi-Fi and Bluetooth, as the setup and pairing processes are removed, and sound can be immediately broadcast to nearby receiving devices. Additionally, sound offers the benefits of geographical co-location: if a user can hear a device ‘chirping’, then they must be nearby to it, making it easy to establish that the person with the sending device is in the same room. This can be used, for example, to only allow hotel guests to sign on to the Wi-Fi with a Chirp, by virtue of the fact that only they have access to their own room.

The team at Chirp developed this technology to facilitate communication between devices of different platforms, form-factors, architectures and eras that run on completely different operating systems and may or may not be connected to a network, thereby fulfilling a niche area in the data communications market. Sound can also travel through other media; for example, P.A. systems in commercial buildings, radio broadcasts, or even websites and feature phones. 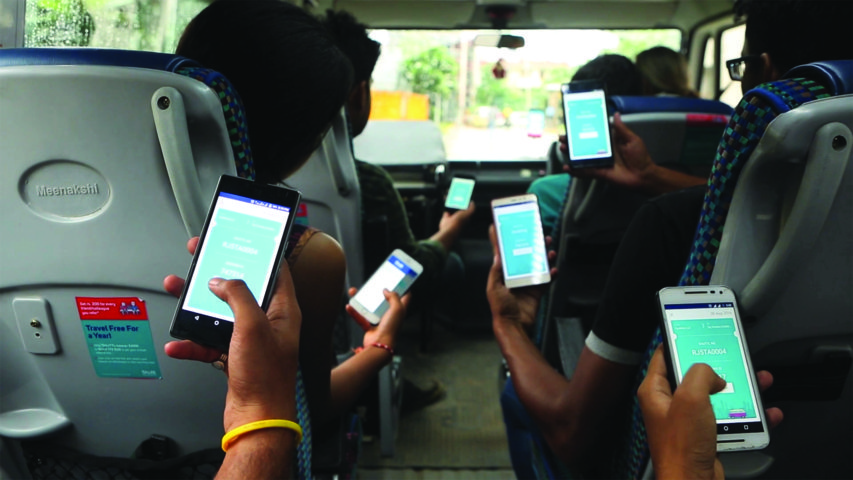 Developing Chirp – From Concept to Commercialisation

The concept of using sound to relay a message between two devices is not unique to Chirp’s data-over-sound technology. ‘Using sound has been a powerful way of communicating data since the earliest days of telecommunications, from telegraphs and Morse code to dial-up modems,’ says Dr Daniel Jones, Chief Science Officer of Chirp. The unique aspect of Chirp’s technology is the use of algorithms that enable data to be sent between spatially-separated devices, using consumer-grade speakers and microphones, in noisy, real-world environments, over the air.

The first experiment that kick-started the development of Chirp’s technology was carried out in 2011 in the Computer Science labs of University College London, UK. The research team showed that data sent over sound waves could be successfully received by mobile phones that had even been placed under heavy mattresses in a noisy environment. Chirp initially launched the technology to market as a consumer facing iOS and Android application that enabled peer to peer content sharing. Although popular, particularly in the education sector where teachers could share content and links to an entire class with the press of a button, Chirp took the decision to repackage the technology into a suite of cross-platform Software Development Kits (SDKs), making it available for other companies to build into their own technology products.

Since this initial experiment and the repackaging of the software into cross platform SDKs, Chirp’s technology has grown into a widely adopted, versatile, convenient, simple and reliable method for wireless communication, which can rapidly send and receive data. The technology excels in areas of low internet coverage, or within dead spots of network coverage in industrial locations. Furthermore, Chirp’s software can be easily and inexpensively integrated into existing infrastructure, and does not require extra networking modems or signal amplification points to be installed. Chirp is now a global leader in data-over-sound communication capable of transmitting data over distances of more than 30 metres, and in regions of extreme background noise. ‘Our first consumer app was used by hundreds of thousands of people worldwide, in offices, bars, cafes and nightclubs,’ says Dr Jones, highlighting the diversity and flexibility of this technology.

The Chirp team, comprising leading scientific and engineering researchers, has been continuously improving Chirp’s data-over-sound technology, thus accelerating of the software from a simple start-up idea to an established global technology.

How Can Chirping Sounds Carry Data?

The key functionality of Chirp’s technology is that it uses algorithms that convert data at a transmitting device into a series of whole numbers (called integers) through a process called ‘modulation’. The values of these integer numbers determine the frequency (or pitch) of a sound wave that the device will generate. First, Chirp’s software translates a message into an array of integer numbers, and then it creates a ‘tune’ or pattern, which is made up of many sounds, each with a different pitch. This tune is then emitted from the transmitting device and the data is carried through the air.

The receiving device with Chirp’s SDK installed detects the incoming sound wave and measures the different pitches of each sound in the tune. This combination of sound pitches is converted back into the original array of integer numbers by a process called ‘demodulation’. Thus, the original message is transmitted to the receiving device, and relayed to the application via the Chirp SDK.

The modulation of messages allows data to be encoded into what could be described as a ‘sonic barcode’ that can be transmitted between devices. Although other methods for encoding data in audio exist, the use of modulation/demodulation gives Chirp’s technology several advantages. Firstly, modulation/demodulation generates a new signal for each new set of data and does not require an existing audio signal to operate on. Also, the process of modulation does not need an external database to look up the data, allowing datasets to be transmitted offline with no time delay. 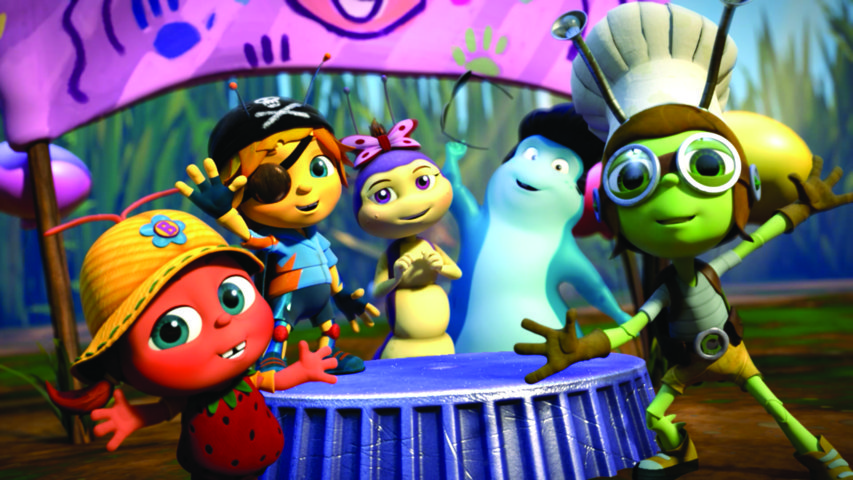 Chirp’s SDKs have been installed on millions of devices worldwide, used across a broad range of applications. These applications include children’s toys, virtual reality technologies, industrial machinery controls and transport.

Chirp has recently announced their collaboration with Hijinx to create toys that magically interact with content on any device. This partnership launched with the official Hijinx Alive™ Powered by Chirp Interactive Beat Bugs toys, to accompany the Emmy-award winning Netflix TV series, where episodes explore the narratives of songs by the Beatles in a child-friendly fashion. Instead of embedding ‘Chirps’ into pre-existing television audio (due to the risk of streaming platform compression methods stripping these out), Chirp created a new technology for this partnership. In this new technology, the toys themselves recognise portions of the show’s audio, and this triggers a specific action for the toy. For Beat Bugs, the toys sing in sync with their counterpart on-screen characters, reacting within milliseconds of hearing the audio.

Another significant area where Chirp’s software has been successfully applied is within the transportation sector. Since mid 2016, a mobile app running Chirp’s software has been used to authenticate passengers boarding buses in India. The transportation company, called Shuttl, provide shuttles between different locations in the city of New Delhi, India. With a population of over 27 million people, public transport in New Delhi is famously chaotic, and the increased number of cars on the road has added to congestion and pollution. Thus, Shuttl saw challenge that needed to be addressed. Shuttl uses Chirp’s software to allow passengers to transmit messages to a device held by the driver. This message is unique to each user and so can be used to identify each passenger. ‘The technology has significantly reduced the workload of their drivers, and has successfully become incorporated into their existing infrastructure,’ states Shuttl’s director.

Kawa Coffee is a specialist coffee shop chain operating in Hong Kong and China. The coffee shop staff wanted a compact and secure device that would enable customers to pre-pay for coffee and then redeem their purchase in store. To meet these requirements, the ‘Kawa Box’ was developed – a technology that can operate without an internet connection or screen. The simple and elegant wooden box encapsulates a device that simply plays out wav files, each representing different price points dependent on the coffee ordered. When a customer’s device with the Kawa app installed is held over the Kawa Box, the box plays the appropriate wav file and the coffee purchase is redeemed within the app. The Kawa box is unlike any other non-contact payment methods, which are often expensive and require bulky equipment and an active internet connection. Chirp’s software has enabled the Kawa Box to be a portable and scalable solution for in-store redemption.

Although the team behind Chirp’s technology is modest, their product is powerful and versatile, and its current applications highlight the diverse potential of the technology. 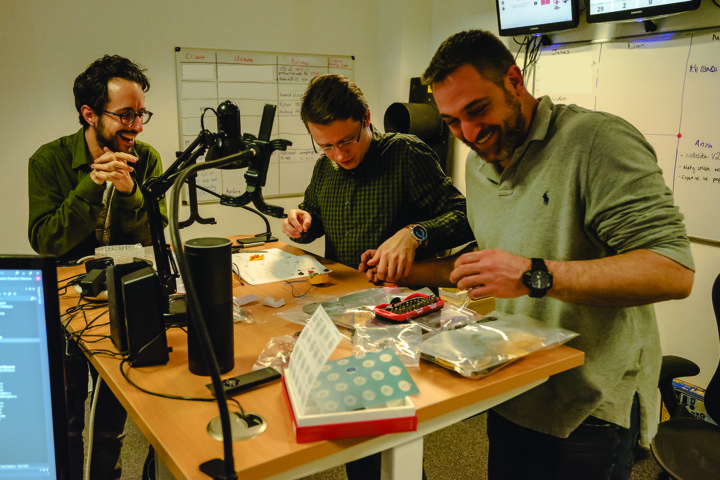 The Future for Chirp’s Data-Over-Sound Technology

As a company, Chirp’s future ambition is to continue to enable communication routes between millions of people and devices, across a broad range of applications, making data transmission between devices seamless, scalable and cost effective. Dr Jones has a vision of enabling any device to connect, interact, and share data with another by focusing on continuous research and development. ‘I think Chirp is a powerful and frictionless way of pairing two devices,’ he states. ‘More than anything, we’re thrilled to see the imaginative ways in which our partners have harnessed the power of Chirp.’ 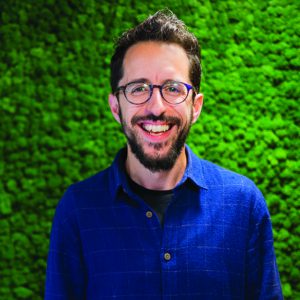 Dr Daniel Jones directs Chirp’s R&D programme, leading research into the next generation of acoustic communication technologies. He has been involved in developing Chirp’s technology since the first proof-of-concept experiment in 2011, in which the underlying engine that powers Chirp’s technology was developed.

Dr Jones graduated with a PhD from Goldsmiths, University of London in 2015, for a project that applied high-performance computing to evolutionary simulations. His other research projects have included Phantom Terrains, a mobile framework that allows hearing-impaired users to hear Wi-Fi signals, and Maelstrom, which uses audio material from media-publishing websites as a distributed, virtual orchestra. Dr Jones developed the innovative 3D audio engine for the BAFTA-nominated mobile games Papa Sangre and The Nightjar. He was also a fellow on the Mozilla Webmaker programme.