Dr Diliana D. Simeonova and her colleagues at the Bulgarian Academy of Sciences, Institute of Microbiology in Sofia, Bulgaria perform research at the interface between geochemistry and microbiology – or simply geomicrobiology. Dr Simeonova and her colleagues are specifically interested the ability of bacteria to transform different inorganic compounds and elements in so many different ways, to gain energy, to survive and proliferate in extreme environments. 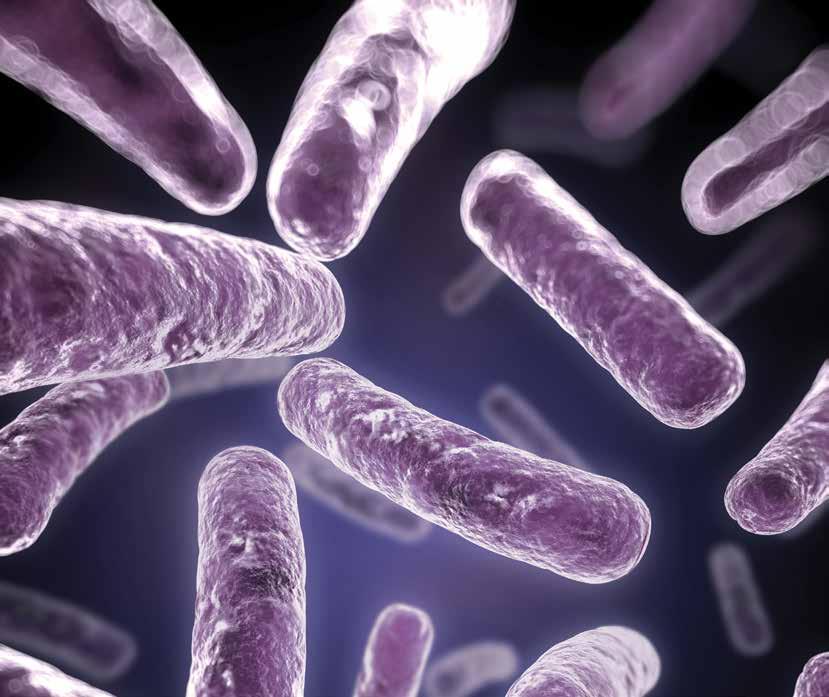 The importance of phosphorus

Gaining an understanding of the basic building blocks of life is an important goal in biology and chemistry. Carbon, hydrogen, nitrogen, oxygen, phosphorus and sulfur are considered the six essential elements of life. Among these, phosphorus is important for the nutrition and metabolism of living organisms. Phosphorus is widely available in the natural environment, and it’s estimated that its abundance in the Earth’s crust is approximately 0.12% (w/w). This element is found in various forms in nature, including mineral forms, such as apatites, organic forms such as in phospholipids, nucleic acids and proteins, dissolved inorganic forms in various oxidation states (P[+V], P[+III], P[+I] species), and gaseous forms in the [−III] oxidation state. In a soluble form, it is most frequently found at a neutral pH as orthophosphates (H2PO4- and HPO42-), and the predominant form of phosphonic acid at a neutral pH, is the hydrogen phosphite ion (HPO32-) or phosphonate, containing phosphorus in the [+III] oxidation state. Phosphonic acid compounds are divided into two classes: organophosphonates (phosphonates), which are characterised by a direct C-P bond, and inorganic phosphonates (phosphites). Furthermore, phosphonates are separated into those that occur naturally and those of an anthropogenic origin.

A wide variety of reduced inorganic phosphorus compounds of anthropogenic origin have multiple uses, including phosphorus triiodide (PI3), which is a reducing agent used in organic chemistry in the conversion of alcohols to alkyl iodides, aluminium phosphide (AlP), which functions as a semiconductor, a fumigant, a rodenticide or an insecticide, and phosphorus trichloride (PCl3), which is the precursor of many organophosphonates with an anthropogenic origin. Currently, inorganic phosphites enter the environment because of human activities, mainly as pesticides, insecticides and herbicides. Since the 1970s, the use of phosphite-based fungicides, against Oomycota plant-pathogens of the genus Phytophthora in agriculture has increased. In addition, some phosphitecontaining formulations are offered and used in agriculture as fertilisers, which increases the controversy surrounding these compounds.

Based on the above knowledge of phosphorus, researchers have revealed that reduced inorganic phosphorus compounds serve as a phosphorus source in the assimilatory metabolism of aerobic bacteria and in anaerobic bacteria. However, the utilisation of the reduced inorganic phosphorus sources as electron donors in the energy metabolism of bacteria is still not fully understood. As Dr Diliana D. Simeonova explains: ‘there are many white patches in our knowledge about this element, its cycle in nature, interactions, and so on. Therefore, I find it impressive to work in this domain, to contribute to the deciphering of the unknown and unrecognised phosphorus-microbial transformations.’ Thus, the studies Dr Simeonova and her colleagues focus on the genes and their products that are involved in the process of anaerobic dissimilatory phosphite oxidation, which occurs in the bacteria species called D. phosphitoxidans. ‘Bacteria are ubiquitous, there are no habitats without bacterial presence,’ Dr Simeonova tells us. ‘Thus, by studying these processes, one may contribute to the better management of phosphorus and phosphorus sources, considering this is one of the five major vital elements, indispensable for life.’ 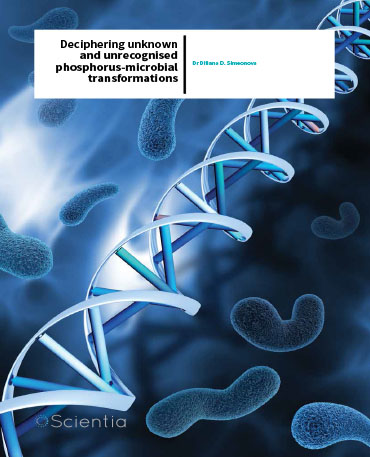 ‘Of huge interest to me is the ability of bacteria to transform different inorganic compounds and elements in so many different ways, to gain energy, to survive and to proliferate in extreme environments (well “extreme” from a human point of view of course!)’ 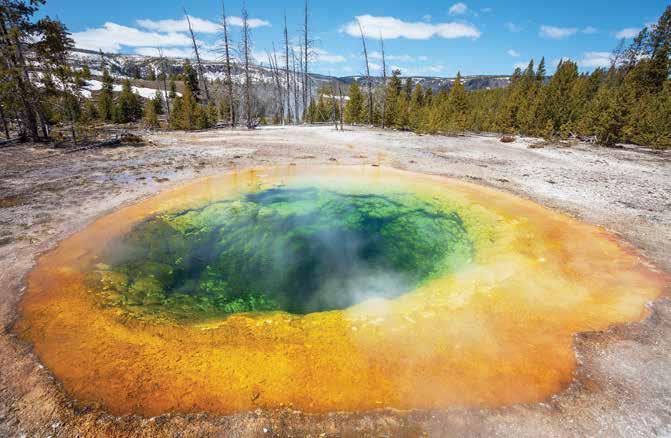 The genome of D. phosphitoxidans had not yet been sequenced at the time Dr Simeonova’s started this research, and thus, her team developed a new approach to access genes and their products in this bacterium. Basically, they started with a single protein, which was specifically expressed only in the presence of phosphite, and in order to identify and study this new enzyme, they had to develop a new approach that enabled its identification.

Dr Simeonova and her colleagues, Professors Bernhard Schink, Michael Przybilski and Dr Iuliana Susnea, from the University of Konstanz, used a combination of inverted PCR with degenerate primers derived from N-terminal protein sequences and highresolution peptide mass determination of proteolytic digests from two-dimensional electrophoretic separation. In other words, they adopted a proteomic approach to uncover the genome of D. phosphitoxidans. The inverted PCR, which was based on N-terminal sequences and high-resolution peptide mass fingerprinting, provided the identification of a new NAD(P) epimerase/ dehydratase by the specific assignment of the peptide masses to a single open reading frame (ORF), excluding other possible ORF candidates. They identified the protein using chromatographic separation and sequencing of the internal proteolytic peptides. A metal ion affinity isolation of the tryptic peptides and high-resolution mass spectrometry provided the identification of five phosphorylation sites identified in the domains at locations 23–47 and 91–118 of the protein. In agreement with the phosphorylation sites identified, a direct molecular weight determination of the soluble protein eluted from the twodimensional gels by mass spectrometry provided a molecular mass of 35,400 Da, which turned out to be consistent with an average degree of three phosphorylations. Ultimately, at the time of this study, D. phosphitoxidans was the only bacterium known to oxidise phosphite to phosphate and gain energy from the oxidation process. Dr Simeonova’s team identified the first protein and its gene involved in this process.

As mentioned above, the diversity of the pathways used for assimilatory phosphite oxidation and the fact that D. phosphitoxidans is the only known bacterium to use phosphite as an electron source, led Dr Simeonova and her team, in collaboration with Professor W. W. Metcalf at the University at Urbana Illinois, USA, to investigate phosphite uptake and the oxidation gene cluster of this bacterium. They specifically wanted to develop enzymatic assays to measure the phosphite oxidation activity in cell extracts, to identify the genes involved in phosphite uptake and oxidation and to physiologically characterise these genes.

To tackle these aims, Dr Simeonova and her colleagues constructed a genomic library of D. phosphitoxidans using the fosmid vector pJK050. They used PCR to screen for clones harbouring the genes involved in phosphite oxidation using primers that were developed based on the amino acid sequences of phosphiteinduced proteins. A sequence analysis of two positive clones identified a putative operon that consisted of seven genes that were predicted to be involved in phosphite oxidation (ptxED-ptdFCGHI). The gene encoding the NAD(P) epimerase/dehydratase was named ptdF, and the other genes were named appropriately. They cloned four of these genes (ptxD-ptdFCG) and heterologously expressed them in Desulfotignum balticum, which is the closest relative strain of D. phosphitoxidans that does not use phosphite as either an electron donor or as a phosphorus source.

The ptxD-ptdFCG gene cluster that was identified was sufficient to confer phosphite uptake and the oxidation ability in the D. balticum host strain but it did not permit the use of phosphite as an electron donor for chemolithotrophic growth. The phosphite oxidation activity was measured in the cell extracts of the D. balticum transconjugants, suggesting that all of the genes required for phosphite oxidation were cloned. The genes of the phosphite gene cluster were assigned putative functions based on the sequence analysis and enzyme assays.

The gene cluster identified by Dr Simeonova’s group in D. phosphitoxidans is the first to show divergence among the phosphite gene clusters of bacteria. At this locus, five new genes were identified. These genes are involved in phosphite oxidation, and this cluster is different from all of the other phosphite oxidation loci so far described, in terms of its structure and the nucleotide sequence of the genes. In addition, it is unique at the amino acid level of the conserved proteins. These data obtained by Dr Simeonova’s team suggest that there might be more variation in the proteins and gene clusters that are involved in sensing, transporting and either the utilisation of phosphite as a single phosphorus source and/or its use as an electron donor in the energy metabolism of bacteria.

Alongside the enzymatic assays aiming to discover the energy conservation mechanism and pathway, Dr Simeonova and her team, together with Dr Anja Poehlein and Professor Rolf Daniel form the University of Goettingen, Germany, focused on the cloning and overexpression of the newly discovered proteins. Their attempts to purify the native proteins involved in the process of anaerobic dissimilatory phosphite oxidation that occurs in the bacteria D. phosphitoxidans, led to the sequencing of the genome of the strain. The team revealed that the genome contains 4,998,761 base pairs and 4646 genes of which 3609 were assigned to a function, and 1037 are without a predicted function. Using a metabolic reconstruction, the team revealed that most of the biosynthetic pathways of Gram negative, autotrophic sulfate reducers were present. Additionally, they found and confirmed the ability of the strain to couple phosphite oxidation with dissimilatory nitrate reduction to ammonia, which in itself is a new type of energy metabolism.

Surprisingly, the team only identified two pathways for the uptake, assimilation and utilisation of inorganic and organic phosphonates in the genome. The unique D. phosphitoxidans Ptx-Ptd cluster is involved in inorganic phosphite oxidation and an atypical C-P lyase-coding cluster (Phn) is involved in the utilisation of organophosphonates. Ultimately, Dr Simeonova and her colleagues presented the whole genome sequence of the first bacterium able to gain metabolic energy via phosphite oxidation. Dr Simeonova states that ‘one of the most important pieces of information obtained through this work was the ability of D. phosphitoxidans to grow by coupling the phosphite oxidation with nitrate reduction under anaerobiosis. This ability was confirmed with physiological experiments.’ In addition, the data also provides the initial information on the composition and architecture of the phosphite-utilising and energy-transducing systems needed to live with phosphite as an unusual electron donor.

Based on the fact that D. phosphitoxidans is able to couple the phosphite oxidation not only to sulphate, but also to nitrate reduction, Dr Simeonova and her colleagues expect that there must be other bacterial strains that are able to gain energy via dissimilatory phosphite oxidation coupled to other final electron acceptors. Thus, her team is interested in discovering such bacterial species, studying their physiology, biochemistry and energy conservation mechanisms, as well as their spatial distribution in different habitats. Thus, Dr Simeonova’s future work will extend the current knowledge on the biogeochemical cycle of phosphorus and its fluxes in nature. 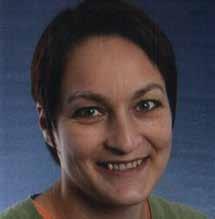 Dr Diliana D. Simeonova is an assistant professor in the Department of Infectious Microbiology at the Bulgaria Academy of Sciences. She first became fascinated by geomicrobial interactions as a third year student at the University of Mining and Geology, in Bulgaria, where she studied geochemistry and microbiology as separate subjects. This gave her the idea to pursue a research career at the interface between geochemistry and microbiology – or geomicrobiology. Dr Simeonova then went on to receive her PhD from Louis Pasteur University in Strasbourg, France, for a project entitled ‘Arsenic Oxidation of Cenibacterium arsenoxidans: Potential application in bioremediation of arsenic contaminated water’. This was followed by a few years of postdoctoral research at the University of Konstanz in Constance, Germany, where she then went on to become the principal investigator on several geomicrobiology projects.

A Poehlein, R Daniel, B Schink and DD Simeonova, Life based on phosphite: a genome-guided analysis of Desulfotignum phosphitoxidans, BMC Genomics, 2013, 14, 753.