Diabetic retinopathy is one of the main causes of blindness in developed countries. Currently, there is no known cure. Dr Lalit Pukhrambam is working to change that. Along with his group at Wayne State University, he is investigating the influence that a molecule, known as thioredoxin-interacting protein, has on the development of diabetic retinopathy and whether targeting this molecule will provide novel therapies in the future.

There are two main types of diabetes – Type 1, in which insulin production is deficient and Type 2, in which the body is resistant to the insulin produced. The majority (around 90%) of diabetics are Type 2 and this form of the disease is known to be associated with lifestyle choices. There are many complications associated with diabetes, including diabetic retinopathy.

Diabetic retinopathy is one of the most severe complications of diabetes. Diabetes can lead to problems with the smallest blood vessels in the body; persistently high sugar levels can damage the tiny blood vessels that deliver a constant supply of blood to the back of the eye, the retina, and ultimately lead to blindness. This was originally thought to be a consequence of problems associated with the blood vessels in the eye, but it is now known to be more complex. The neurons in the eye are also affected by diabetic retinopathy, with neuronal injury occurring early on in the development of the disease.

Given the high rate at which the retina must use oxygen to produce energy, reactive oxygen species (ROS), by-products of oxygen metabolism, are also considered to play an important role in the development of diabetic retinopathy, along with low-level inflammation caused by chronic hyperglycaemia, or high sugar levels.

It was recently demonstrated that the level of one particular molecule, thioredoxin-interacting protein (TXNIP), is increased in rodent models of diabetic retinopathy and hyperglycaemia. TXNIP binds to thioredoxin, a protein that normally prevents the accumulation of ROS and consequent damage to cells caused by oxidative stress. Therefore, an increase in TXNIP leads to a decrease in the scavenging activities of thioredoxin and an increase in ROS stress. Normally, there are antioxidant systems in retinal cells to deal with ROS, but under acute or chronic stress the ROS are still able to accumulate and damage mitochondria (the energy producing ‘powerhouses’ of the cell), DNA, and cell membranes. 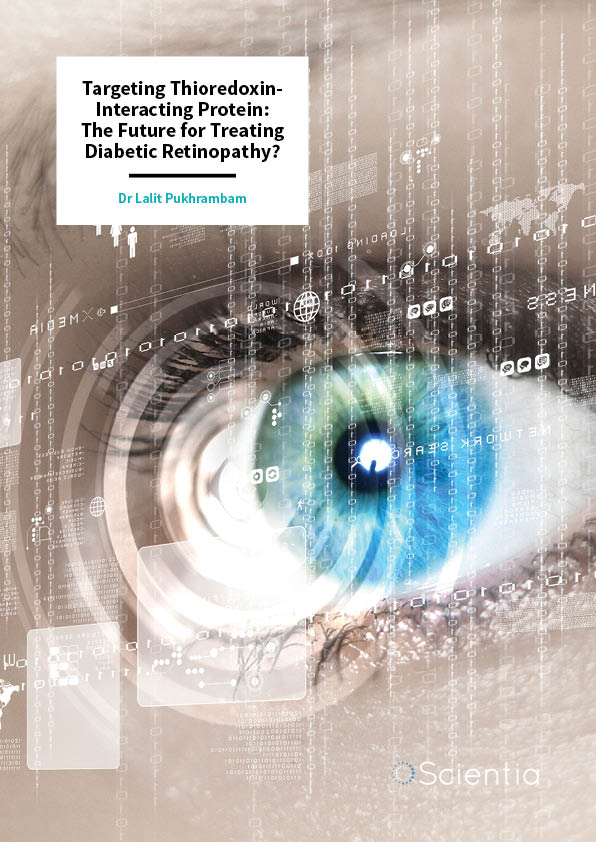 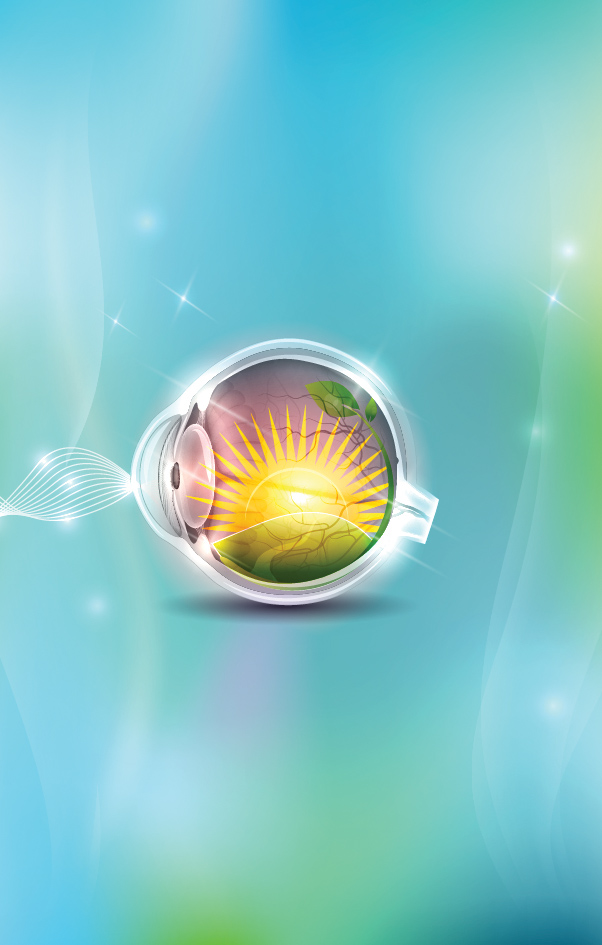 TXNIP is important in the link between glucose toxicity and the death of insulin producing beta-cells in the pancreas. Indeed, mice without TXNIP are resistant to some models of diabetes. Although known to be complex, the relationship between TXNIP and diabetic retinopathy remains to be clearly elucidated. It is this relationship that Dr Lalit Pukhrambam, of Wayne State University, is trying to understand.

TXNIP and the Development of Diabetic Retinopathy

Dr Pukhrambam and his group are interested in the molecular mechanisms responsible for diabetic retinopathy because identification of these opens up the possibility of developing novel gene therapies to treat, or prevent the onset, of diabetic retinopathy.

The intricacies of the underlying mechanisms linking TXNIP to diabetic retinopathy remain unclear. It has previously been suggested that several metabolic pathways may be involved, as the retina consumes large amounts of glucose and oxygen in order to function correctly. Therefore, any damage to the energy producing pathways in the retina has severe effects and potentially contributes to the development of diabetic retinopathy.

Early work by Dr Pukhrambam investigated one aspect of this relationship by focusing on a protein called RAGE (short for receptor of advanced glycation end products). A sustained increase in the number of molecules that bind to RAGE is an important factor in the development of diabetic complications. An increase in RAGE binding leads to a subsequent increase in RAGE expression, which can lead to inflammation. The study, which was collaboration between Dr Pukhrambam, Dr Lorena Perrone, Ms Takhellambam Devi, Professor Ken-ichi Hosoya, and Professor Tetsuya Terasaki, investigated whether RAGE induced inflammation in rat retinal cells kept under diabetic conditions. The ultimate aim of the study was to investigate whether high glucose and RAGE induce inflammation through TXNIP expression or changes in other genes.

Following on from this previous work, Dr Pukhrambam further investigated the role of TXNIP in diabetic retinopathy. Using a diabetic rat model, his team showed that TXNIP expression was elevated in the retina and correlated with an increase in markers of inflammation. Furthermore, after blocking the expression of TXNIP in diabetic rat retinas, they abolished diabetes-induced damage of the nerve cells in the retina. These findings support those of the previous study by showing that TXNIP has a critical role in inflammation and, furthermore, may present potential therapeutic approaches that could be used to block onset and progression of diabetic retinopathy.

Another role for TXNIP in diabetic retinopathy involves the NLRP3 inflammasome, which usually acts as a defence against invading viruses and bacteria. The inflammasome is a signalling complex inside the cell, made up of many proteins. Its job is to recognise threats and mobilise the necessary troops from the immune army to deal with the intruder. Dr Pukhrambam’s research has shown that high glucose levels increase TXNIP, which is also known to be involved with the NLRP3 inflammasome under oxidative stress. This presents another potential therapeutic target – reducing or blocking TXNIP and the inflammasome, in combination or singly, may reduce the chronic low-level inflammation observed with diabetes and related diseases. 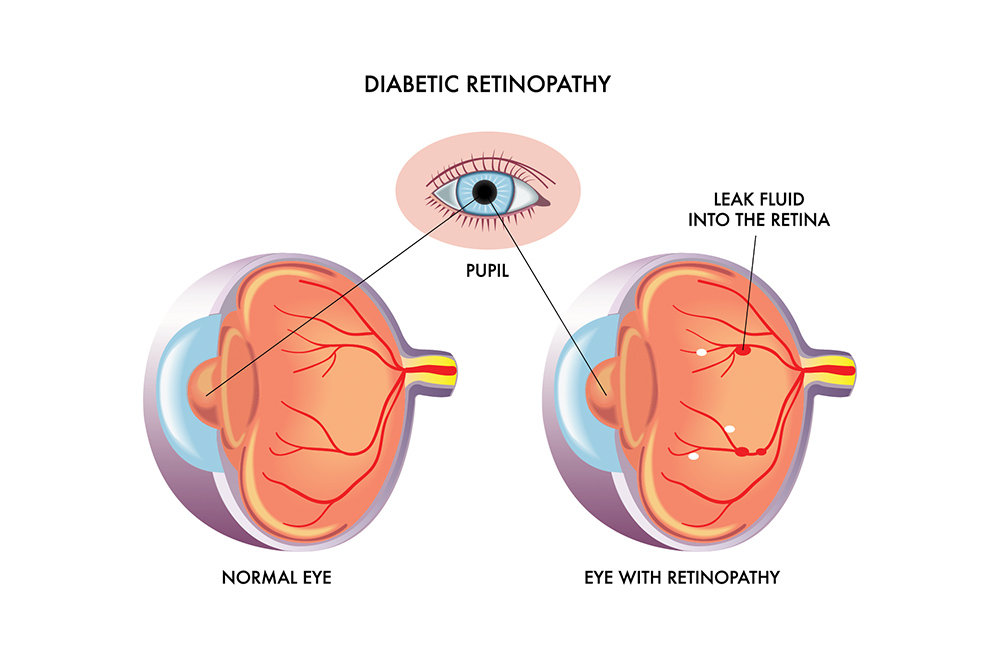 More recent work by Dr Pukhrambam’s group has looked at the type of cells that TXNIP acts on. Retinal neurons are known to be injured during the early stages of diabetes and retinal Müller cells are a type of cell that act as support cells for neurons. Dr Pukhrambam proposes that retinal Müller cells react to prolonged high glucose levels by upregulating TXNIP, as well as other cell survival and defence mechanisms.

However, under chronic cell stress situations, these mechanisms may lead to premature cell death and increased progression of diabetic retinopathy. One example of this is mitophagy, where defective mitochondria in cells are removed via lysosomes following chronic damage or stress. Disturbed mitophagy leads to accumulation of non-functional mitochondria, oxidative stress, and low ATP production. This fits in with the idea that mitochondrial dysregulation, and the resulting energy imbalance, are critically important in diabetes-associated diseases. Therefore, therapies targeting TXNIP could break this chain and prevent excessive oxidative stress arising from sustained responses to high glucose levels.

Leading on from the idea that energy imbalance plays a role in the development of diabetic retinopathy, further work by Dr Pukhrambam’s group aims to investigate the link between TXNIP and mitochondrial dysfunction. To do this, they manipulate the TXNIP levels in rodent models of diabetes using a cutting-edge gene editing method known as CRISPR/Cas9. They also use in vitro methods in the laboratory, including the use of retinal Muller glia and other cells from the eye, such as endothelial cells, pigment epithelial cells, and neuronal cells, to try and dissect the ways in which TXNIP induces mitochondrial dysfunction.

Understanding the extent to which mitochondrial flux, that is, the movement of molecules through the membrane of the cell via the lysosomal exocytosis is beneficial or detrimental remains a priority for diseases such as diabetes. Dr Pukhrambam has hypothesised that manipulation of mitochondrial flux may be able to track the development of diabetic retinopathy. Future studies by his group will aim to answer this question. 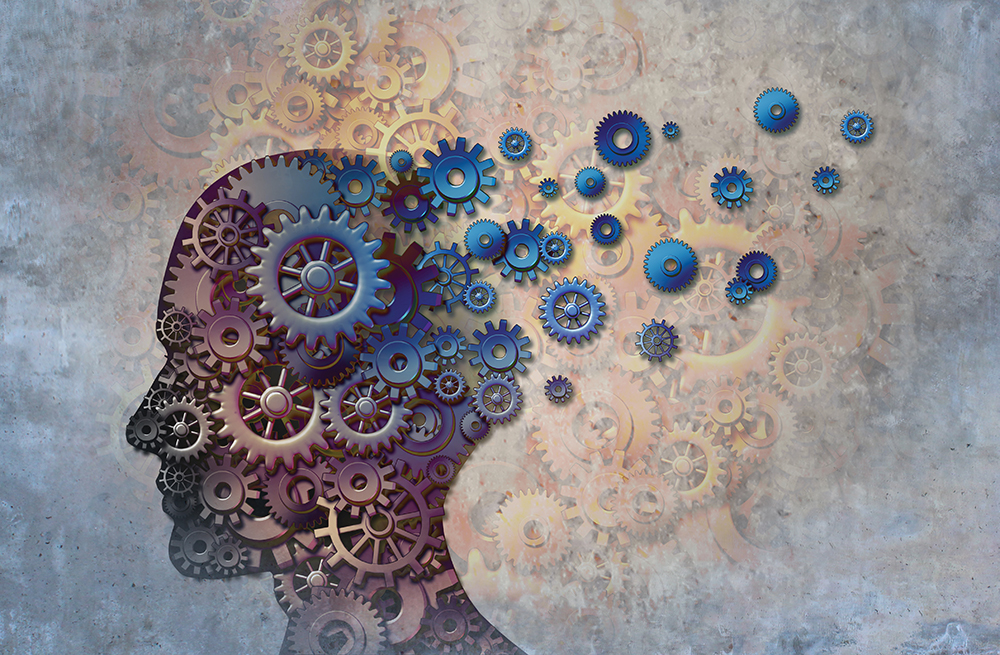 If it is possible to link the TXNIP gene promotor with the insulin gene, or another gene of interest, this would allow an adult stem cell population to be induced to insulin producing pancreatic beta-like cells. The TXNIP gene promoter is the region of the genome that sits very close to the TXNIP gene and it is responsible for the TXNIP gene being switched on and off, thus controlling the amount of TXNIP being produced. These new insulin producing cells may subsequently alleviate some of the complications associated with diabetes, as they could be put back into patients after they have been manipulated outside the body.

Dr Pukhrambam and his colleagues have recently applied for a patent to do just this, and plan to investigate the possibility of using this gene therapy technology in in vivo and ex vivo settings. However, for this to eventually become a viable treatment option, there are many hurdles to overcome. These include the problem of getting the gene system into the retina, as it would probably have to be injected directly into the eye as the retina has a blood-retinal barrier and to minimise the immune response from the rest of the body. Gene incorporation in the retina may be achieved by using adeno-associated virus or lentivirus delivery systems.

Applications of TXNIP Beyond Diabetic Retinopathy

In addition to diabetic retinopathy, TXNIP is known to be upregulated in ageing and age-related disorders such as Alzheimer’s and Parkinson’s diseases. In these neurodegenerative diseases, mitochondrial dysfunction, protein misfolding, and mitophagy dysregulation are known to be linked to disease development and progression. Manufacturing a TXNIP promoter linked inhibitory RNA targeted to TXNIP messenger RNA itself with the ability to decrease its own expression could also have an immeasurable impact on patients suffering from other diseases associated with mitochondrial dysfunction. Dr Pukhrambam makes the exciting proposal that these TXNIP-promotors could be engineered in such a way that gene expression may be activated by a physiological trigger, such as the high glucose levels encountered after a meal. 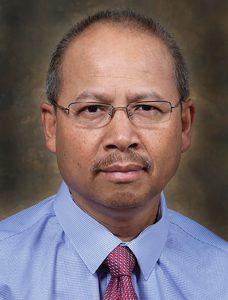 Dr Lalit Pukhrambam obtained his PhD in Biochemistry from the Indian Institute of Science, and is currently an Associate Professor in the Department of Ophthalmology, Visual and Anatomical Sciences at the School of Medicine, Wayne State University. His research focuses on many facets of diabetes, including epigenetics, gene and cell therapies, and the cellular and molecular mechanisms of the disease. In particular, his group investigates the critical role of thioredoxin-interacting protein

in diabetic retinopathy. With a prolific publication record in his field, Dr Pukhrambam is an active editor, as well as an experienced journal and grant reviewer. In addition to his research responsibilities, Dr Pukhrambam is engaged in teaching at both undergraduate and postgraduate levels.