Trees benefit cities in many often-overlooked ways. They not only beautify concrete backdrops, but also improve the quality of our urban lives by providing shade, reducing storm runoff, filtering air and providing homes for birds and insects. Trees face big challenges, however, growing up in cities, largely because of drought and poor soils. To help trees survive these concrete deserts, Dr Nina Bassuk and her colleagues at Cornell University have been evaluating trees and shrubs for their ability to adapt, including developing resilient hybrid oak trees. A parallel research track aims at remediating urban soil conditions to reduce urban tree stress.

Life as a city tree is not easy. For one, trees rarely get off to a good start in cities, as planners often ignore them in the early stages of urban development, and stick them in after the concrete has dried and construction is finished. ‘Plants are often placed in cities as afterthoughts squeezed between buildings, sidewalks, roads and parking lots, and continually buffeted by construction and urban change,’ explains Dr Nina Bassuk, a horticultural scientist at Cornell University.

Dr Bassuk, who heads the Urban Horticulture Institute (UHI) at Cornell, is a tireless advocate for city trees. She has dedicated her life to searching for ways to overcome problems they face in cities.

‘Trees often find themselves being on the short-end of getting the water, the nutrients, the soil biome they need,’ she says. To improve their lot in life, Dr Bassuk has spent nearly four decades improving their genetic viability and growing conditions. To accomplish this, she has had to understand what was happening both above and below the city surface.

For instance, above-ground issues include amount of sunlight, wind patterns, rain shadows caused by buildings, overhead power lines, and pollution caused by run-off of de-icing salts. Concrete, asphalt and even car hood surfaces reflect heat and can cause air temperatures around trees to rise drastically, by up to 7°C. Heat makes trees lose water faster, especially in places like large car parks, where ironically, shade is most often desired.

‘We try to improve the environment for trees, within the bounds of an urban environment, as well as evaluate and utilise the best genetics that can withstand a city’s onslaught’

Below ground, city soil is notoriously deficient in nutrients and highly compacted. Tree roots often don’t have room to grow because there is simply not enough soil volume, and compaction continuously occurs as construction, pavement and traffic crush the soil. All of these conditions prevent trees from getting the water they need.

Drought is, in fact, a city tree’s biggest challenge. For newly planted trees, their roots can’t absorb water fast enough to keep up with water loss – or ‘transpiration’ – from their leaves. For more established trees, their roots are often too restricted to absorb enough water and their growth suffers as a result. Paving with impermeable surfaces only further lowers or cuts off water supply. As trees dry up, they begin to lose ‘hydraulic conductance’ – their capacity to move water – and their ability to photosynthesise. Because of this, many trees die earlier than their forest dwelling counterparts. 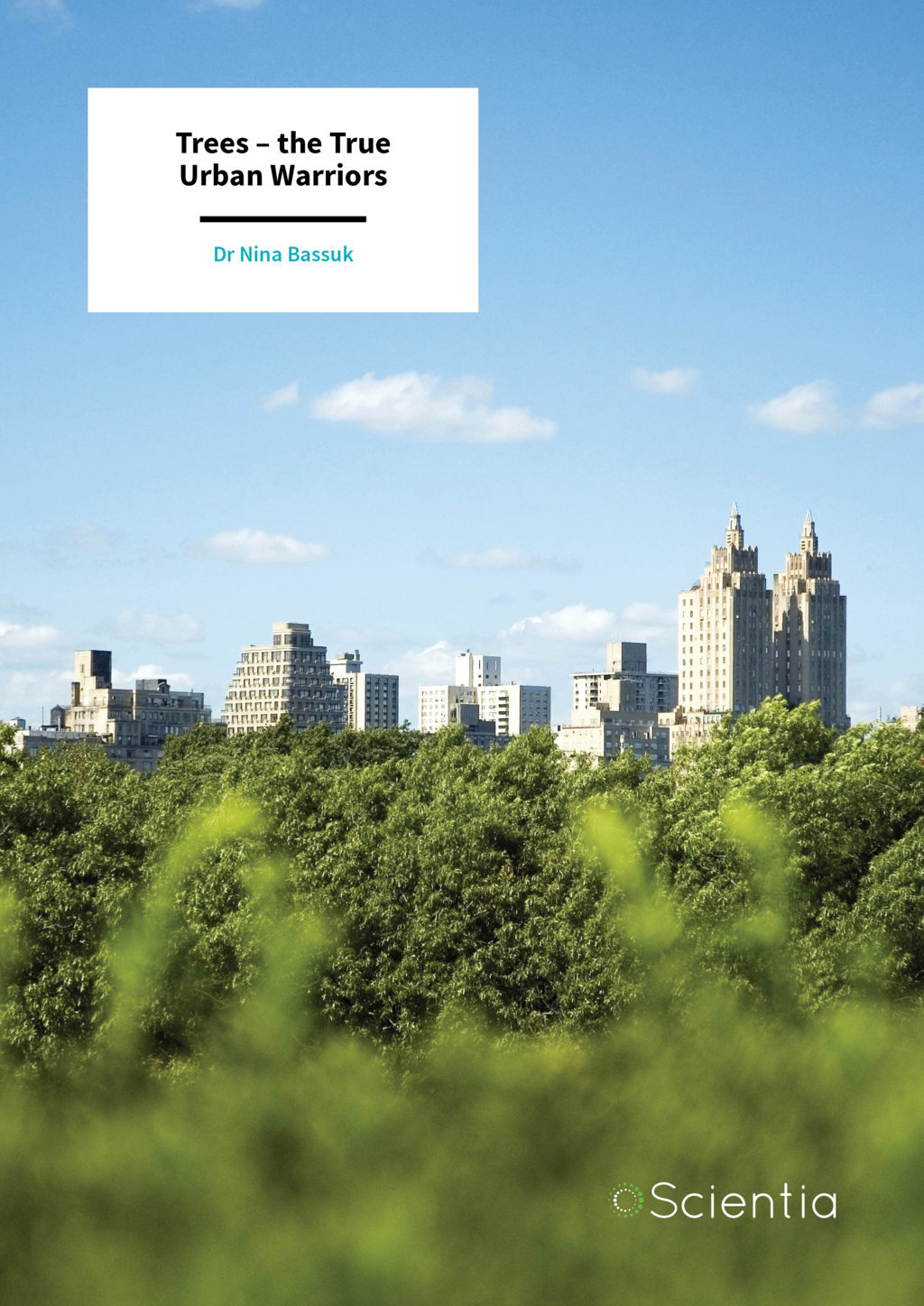 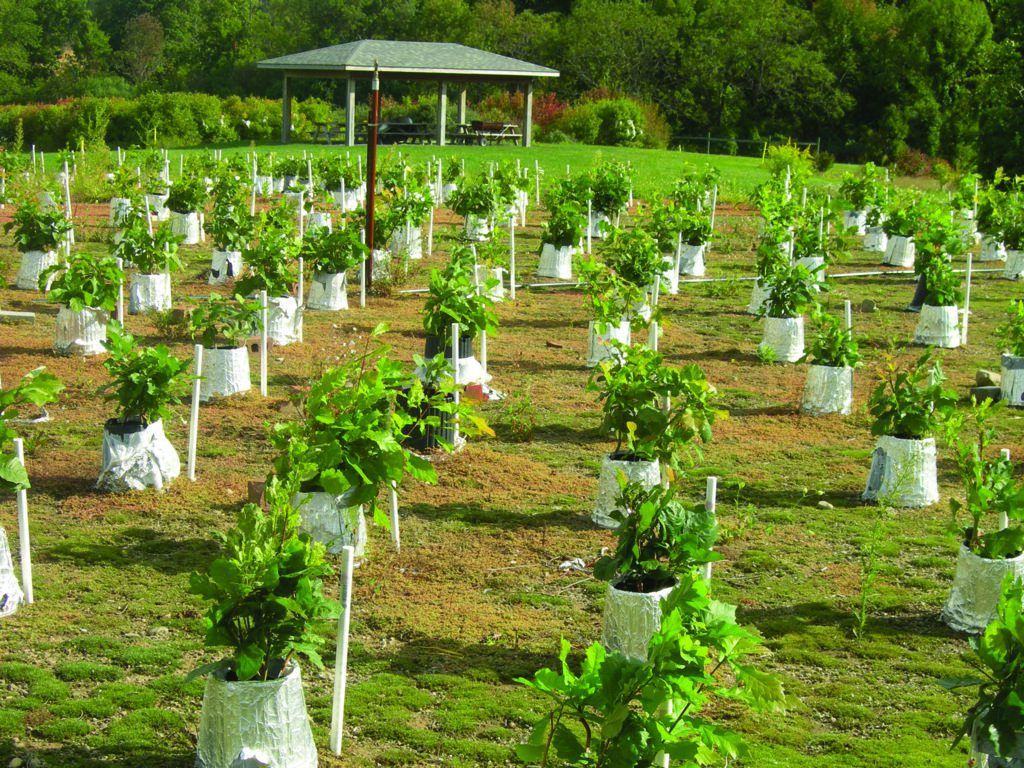 Not helping matters is the fact that urbanites often plant trees that come from moist and nutrient-rich forests, when they would have been better off using trees from dry steppe or rocky mountain environments. Perhaps ‘concrete jungle’ is a misnomer, when in reality, a city is a concrete desert.

For many years, Dr Bassuk and the UHI team have been looking to improve green areas of these concrete deserts. ‘Our work deals with finding adequate space and resources necessary for healthy tree growth as well as finding the best and toughest plants that can thrive in this environment,’ she explains. ‘We do this through research, teaching and outreach to the professions that manage urban forests.’ 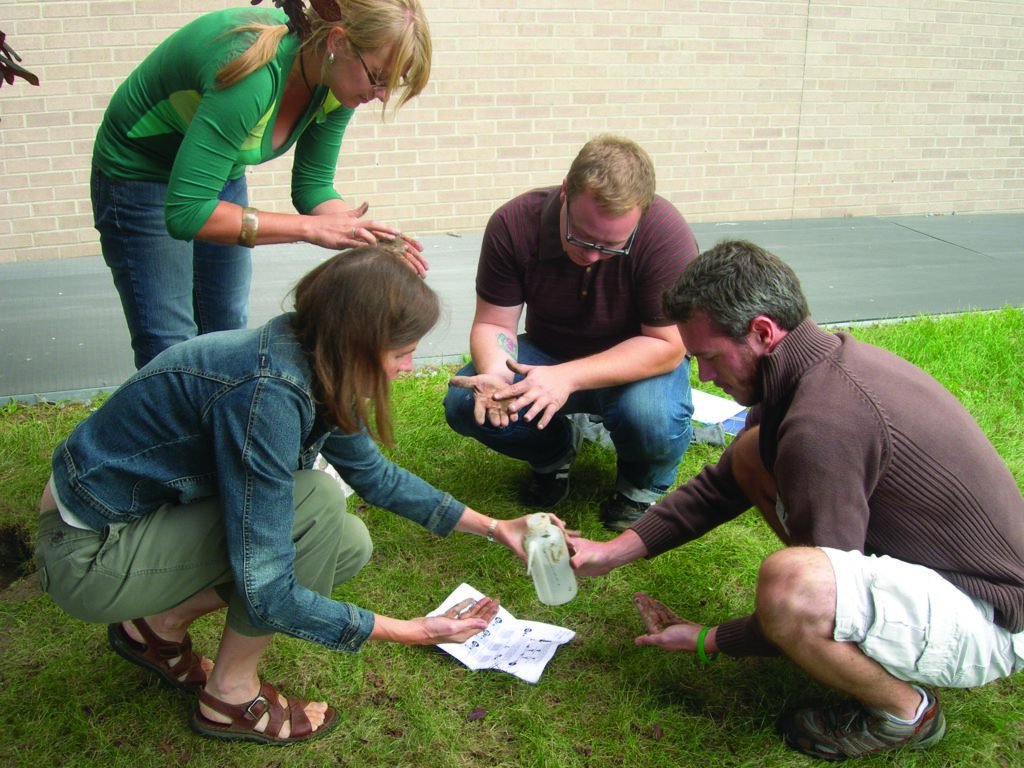 Students carrying out soil assessment on design and instalment site

Since 1995, Dr Bassuk and her colleagues have focussed their urban forest studies on the oak, or Quercus, species. Oaks are not easy to propagate asexually (by grafting or rooting cuttings), so the scientists have been keen to develop new ways to grow these popular and beautiful trees.

By 2006, they had developed over 350 unique hybrids by crossing four different oak species – Quercus bicolor, Quercus muehlenbergii, Quercus robur and Quercus macrocarpa – with other resilient oaks from across the US, Mexico, Europe and Asia. ‘These trees were created by crossing hardy native trees with compatible trees from harsh environments such as deserts and coastal areas,’ explains Dr Bassuk, adding that their efforts paid off: ‘We have over 300 unique trees that show much promise in withstanding the environmental stresses found in urban and other human impacted landscapes.’

From 2009 to 2012, the researchers planted their hybrids in a field near their laboratories in Ithaca, New York. They narrowed the number of crossbreeds down to around 30 unique hybrids that consistently produced more well-rooted shoots and were more tolerant to the cold and alkaline soils common in urban landscapes. 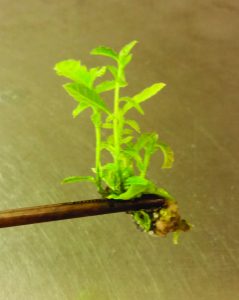 In a two-year study that began in 2015, Dr Bassuk and her team started to identify and propagate those hybrid oaks that are better adapted to drought and climate change. To ascertain whether a plant is drought tolerant, scientists typically measure its ‘water potential at turgor loss’, In botany, turgor refers to the rigidity of plant cells due to the absorption of fluids. Plants with a negative turgor loss point are generally more drought tolerant, since they can continue to function over a wide range of water availability.

As part of this study, the team developed new methodologies to test how resilient her oak hybrids are in the face of drought. They did so at a molecular level by using a tool called an ‘osmometer’. Using these sophisticated instruments, the team are able to measure the osmotic pressure of the trees’ leaves (the pressure of water moving across a membrane due to osmosis). They can then see whether molecules found within the leaves cause the water pressure to increase. This process allows them to measure the ability of their tree species to survive in the dry, urban environment.

During this project, UHI has also been developing new ways to asexually propagate – or clone – their oak hybrids. They had successfully grown them from stool beds, a method that entails harvesting and growing shoots of suckers off of root stocks. However, this process was very slow, so they turned to tissue culture, or ‘micropropagation’, which basically involves growing tree cells in a tube.

Since 2017, tissue culture methods have allowed the team to speed up the process and generate large numbers of oak clones in one growing season alone. Their overall aim is to propagate their hybrids on a much bigger scale so that nursery growers can begin to grow and sell their own stock. 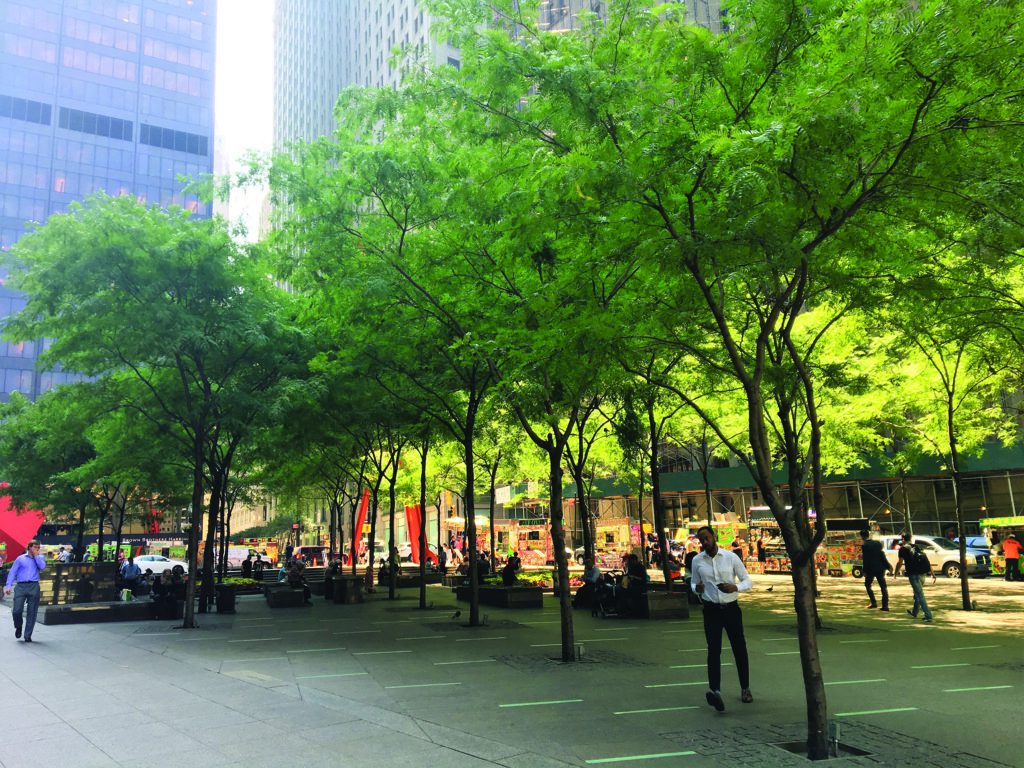 But what good is it to produce a better urban tree when soil conditions are so poor? No tree will thrive without adequate room to grow, nor will they survive for long in compacted soils. An example often cited by horticulturists is the ‘bath tub effect’, whereby trees are planted in compacted soils that can’t drain water and their roots, unseen to the human eye, drown or rot. ‘Compaction is probably the single most limiting soil condition for urban plants,’ explains Dr Bassuk.

To prevent the effects of soil compaction, Dr Bassuk and her colleagues have developed a patented system known as CU-Structural Soil® or CU-Soil®, a precise mixture of soil and gravel that is specifically designed to go under sidewalks and pavement. The engineered soil allows for the compaction required to bear heavy loads, but at the same time has large pores that allow for tree roots to grow through it.

They have also developed another technique known by the playful name of ‘Scoop and Dump’. In this system, they use a backhoe to dig in ‘veins’ of rich compost into poor, compacted soils. ‘The backhoe scoops compost and compacted soil down to a depth of 18 inches and dumps it back on the ground, thus fracturing the compacted soil and allowing compost to settle between the clods,’ explains Dr Bassuk. ‘Plants are planted and mulched. The mulch is reapplied annually until there is canopy closure to replenish the organic matter in the soil. This technique has affected long-term soil remediation and improved plant growth.’

Along with soil compaction, the research team also need to consider other parameters of soil health. They have to take into account chemical parameters such as pH, phosphorous, potassium and salinity, along with physical characteristics, such as density, texture and the ability to hold and drain water. 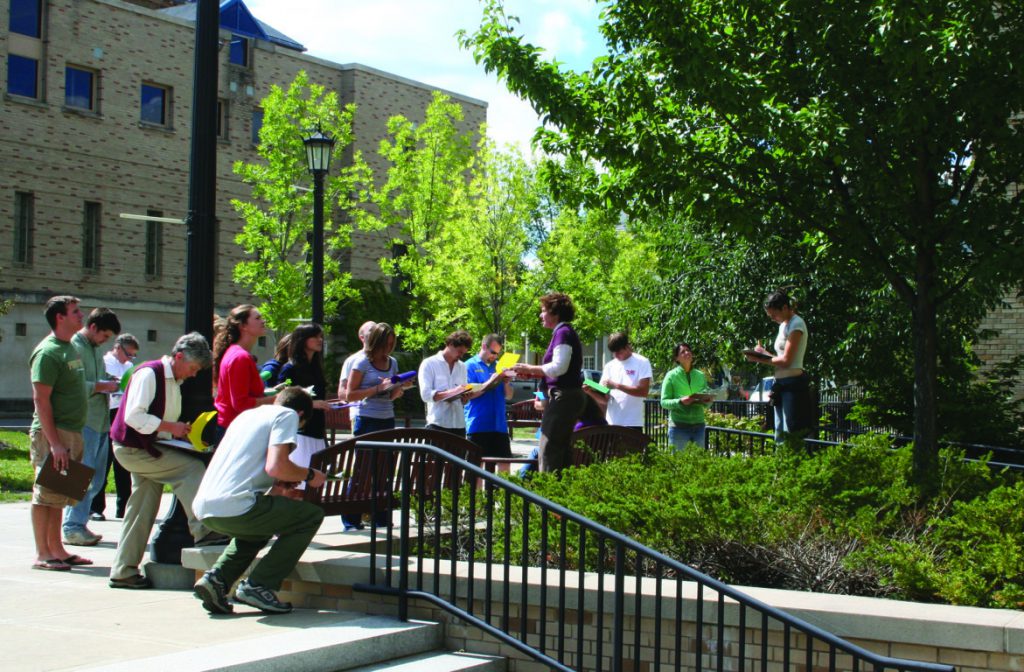 Once ideal trees have been identified and soils prepared, a final key issue to success is transplanting. Logically, Dr Bassuk is also addressing the best way to move their hardy new hybrids into the city to avoid transplant shock, which occurs when water supply is disrupted. This phenomenon, explains Dr Bassuk, results in the ‘poor growth that trees often experience after transplanting including reduced stem growth and small leaves.’

Certain trees are more susceptible to this than others and in the past, nursery workers would often prune their roots before actually transplanting them. The thought then was that cutting roots would promote their regeneration and branching, while creating a denser root ball. But this practice involved hours of labour and fell out of favour with the invention of the modern tree spade. This powerful machine uses blades to cut a circle around a tree and then lift it and its encasing root ball and soil out of the ground.

However, tree spades haven’t necessarily improved transplanting success for difficult trees like oaks, according to Dr Bassuk. Therefore, she and one of her graduate students are now investigating the age-old method of root pruning as a possibly better method.

They plan to prune the roots of several tree species and leave them to grow for one year in a nursery. Another control group with similar species will not be pruned. The researchers will then transplant both groups at the same time and start to record what happens. They will measure the hydraulic conductance in newly emerging roots, both at the time of transplanting and every month thereafter. Previous studies have shown that hydraulic conductance is linked to how well a tree responds to transplant shock. They will also measure growth of shoots, stems and leaves throughout the growing season. Dr Bassuk says that experiments are also under way to manipulate roots so that they can take up water more quickly, and increase transplant success. 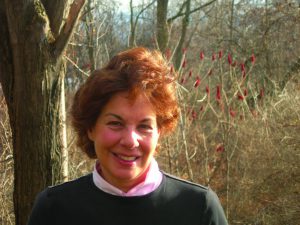 Dr Nina Bassuk obtained her PhD in Horticulture from the University of London in 1980. She has been a professor and program leader of the Urban Horticulture Institute at Cornell University for the past 37 years. She is a founding member and past president of the New York State Urban Forestry Council and is co-author of Trees in the Urban Landscape, a guidebook on establishing trees in disturbed and urban landscapes. Dr Bassuk has authored over 100 papers on the challenges of growing plants in urban environments, including how to select plants for difficult sites and improving soils and transplanting techniques. She works closely with municipalities to help implement best practices in urban forestry management and developed the Student Weekend Arborist Team to inventory public trees in communities in NY State. Dr Bassuk also teaches a course named ‘Creating the Urban Eden’, which integrates woody plant identification with landscape establishment techniques for difficult urban sites. She is a frequent invited speaker at national conferences and workshops.