For decades, physicists have struggled endlessly with the problem of quantum many-body systems – systems containing multiple quantum particles. Because of quantum properties, the ways in which these systems behave are unpredictable when using conventional mathematics, making theoretical simulations virtually impossible. Now, Dr Román Orús at the Johannes Guttenberg Universität in Germany (soon moving to the Donostia International Physics Centre in Spain) believes that tensor networks will become a vital tool when exploring these unconventional properties. He hopes that the cutting-edge mathematical technique will have implications in fields from artificial intelligence to quantum gravity.

When quantum particles are on their own, theoretical physicists have little trouble in predicting how they will behave. Using the Schrödinger equation, they can predict how the characteristics of the particle will change over time, accounting for quantum properties such as the particle’s spin and momentum.

However, for systems where many of these particles are in play, calculations are notoriously difficult. In these so-called ‘quantum many-body systems’, the fates of two or more particles can become entwined through the little-understood property of entanglement. Due to this phenomenon, the locations, spins, and momenta of two particular particles can be directly connected with each other, regardless of the distance between them. Meanwhile, observers ultimately have no easy way to determine how entangled two particles are – a nightmare situation when many particles are involved.

To begin to understand the behaviour of quantum many-body systems, theoretical physicists have long realised that they need to construct simplified models in order to study the complex interactions that occur. To do this, they require reliable numerical simulations – the construction of which has created the need for an entirely new branch of mathematics. Since the 1990s, the idea of constructing so-called ‘tensor networks’ has propelled the mission to construct simulation methods, but the complex mathematics behind them has required years of research to perfect.

Dr Román Orús and his colleagues are at the forefront of this work, and believe that tensor networks are vital in explaining a wide range of quantum phenomena.

‘The topic of tensor networks has exploded a lot in recent years, and is now finding applications in many fields, including condensed matter physics, quantum gravity, lattice gauge theories, open systems, machine learning, and many other places.’

The Mathematical Power of Tensors

Ask just about any physicist, and they will tell you that among their earliest memories as students of the subject was the study of vectors. In physics, we can attach numbers to many quantities: speed, distance and mass, to name a few. These ‘scalar’ quantities are useful in simple problems, but most often in physics, we need information about the direction in which these scalars act. By assigning direction coordinates to scalars, they can be turned into more useful vectors: velocity, displacement, acceleration. 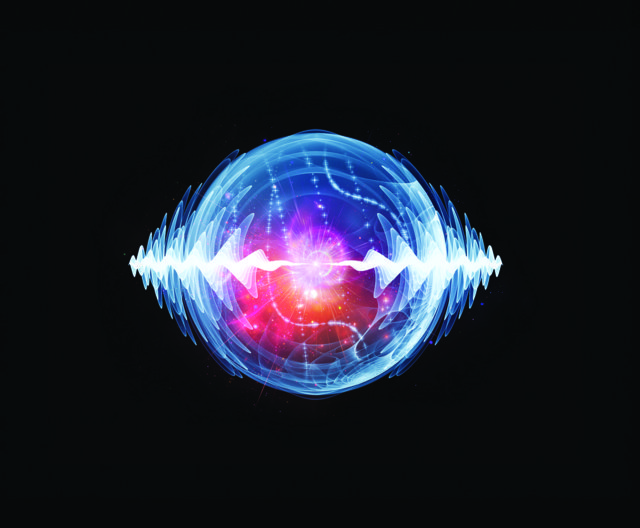 However, as is so often the case in physics, problems rapidly become far more complex than before, as even Einstein found out the hard way. When constructing his theory of general relativity, Einstein struggled to make his calculations using vectors alone. He famously enlisted the help of his mathematician friend Marcel Grossmann, who would enlighten him on a mathematical construct a degree of complexity higher than vectors, known as tensors.

Now part of the toolbox of skills for many physicists, tensors contain information about the relationships between scalars, vectors and even other tensors. The concept was a breakthrough for Einstein, who used tensors as a fundamental building block in his explanation of the union of space and time.

However, in more recent decades, problems have inevitably been thrown up that require yet another layer of complexity – perhaps the most notorious of these is the quantum many-body problem. This is the stage of complexity where Dr Orús joined, and at the heart of his solution for creating simulations of complex quantum phenomena, is the concept of tensor networks. ‘The topic of tensor networks has exploded a lot in recent years,’ he says. ‘It is now finding applications in many fields, including condensed matter physics, quantum gravity, lattice gauge theories, open systems, machine learning, and many other places.’

A New Layer of Complexity

To visualise the structure of tensor networks, Dr Orús and his colleagues use the analogy of DNA, and how its structure determines the overall makeup of the human body. Molecules of DNA act as the fundamental building blocks of our biological characteristics – aspects ranging from our height to our personality traits can ultimately be explained by how these blocks are positioned and interact within a highly complex network.

In the same way, individual tensors act as the DNA of an overall complex system, which can be described by its ‘wave function’. The characteristics and interactions of each individual tensor in the network play a part in determining what the overall wave function will look like, therefore providing insight into how the quantum system will behave. But to get to this stage, some highly sophisticated mathematics – the product of decades of research – is required.

With this infrastructure in place, reliable numerical simulations of quantum many-body systems can now take place with some further mathematical modifications. ‘My main focus now is the development of simulation techniques for quantum lattice systems using tensor networks, and the mathematical investigation of quantum many-body entanglement,’ Dr Orús explains. ‘My plan is to apply these methods to study a number of important phenomena.’ 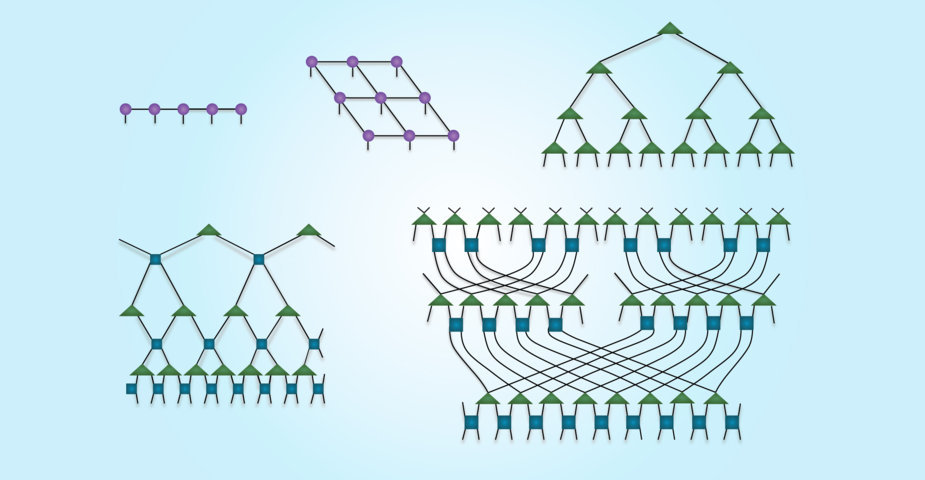 By exploiting the mathematics behind MPS and PEPS, Dr Orús and his colleagues have worked towards fine-tuning tensor networks to display quantum properties reliably. Using the models, they have analysed how tensor networks can be used to simulate fermions – a family of quantum particles that includes electrons and quarks, whose dynamics are incredibly hard to predict using conventional mathematics.

The team has also studied symmetries in tensor network states – a special case in which the quantum state of the system was not changed during an interaction with other systems. In addition, they have explored how tensor network simulations can be used to account for complex patterns of entanglement – perhaps the most important requirement for replicating truly realistic properties of many-body systems.

Using these ingredients, Dr Orús and his team have recently investigated a wide range of special cases of the behaviour of quantum many-body systems. In 2016, they studied how a theoretical system of magnetic particles in two dimensions would dissipate over time when immersed in an environment. Previous difficulties had arisen from the unpredictable behaviour of entangled particles, yet the algorithms used by Dr Orús and his colleagues managed to reliably predict how the system would evolve.

One year later, the team analysed how infinite tensor networks could be constructed to analyse Quantum Electrodynamics (i.e., the theory of electromagnetic interactions), allowing them to be used to simulate a system large enough to display macroscopic properties. This was particularly useful, as it allowed a first theoretical glimpse into how the so-called ‘standard model’, which is our deepest understanding of how particles interact in nature, could be eventually studied thanks to the new simulation methods based on entanglement – an unthinkable feat just a few decades ago.

Dr Orús is confident that tensor networks could be put to an almost bewildering array of uses in the near future. ‘Examples of problems are topological quantum order, frustrated quantum antiferromagnets, quantum dissipation, quantum transport, many-body localisation, lattice gauge theories, holographic entanglement, new numerical simulation methods, the connection to artificial intelligence, and possible connections of all these topics to experiments,’ he lists.

Each of these uses is an in-depth area of physics in itself, but they are all unified in their need for the accurate simulations of the properties of quantum many-body systems. The study of antiferromagnets, for example, involves simulating the behaviour of many electrons at low temperatures. Artificial intelligence and machine learning solve problems using algorithms that act out scenarios repeatedly – gradually improving their methods for completing tasks, until becoming expertly skilled. Just as in our brains, computers will need to make complex connections between ideas and concepts in their own hardware, making simulations with tensor networks particularly useful.

Perhaps the most intriguing consequence of Dr Orús’s research will be an insight into the most infamous problem in physics to date: quantum gravity. In their own right, the theories of quantum mechanics and Einstein’s theory of general relativity seem to work remarkably well, and yet a single theory that marries them both together has eluded physicists for the best part of a century. In a macroscopic system of quantum particles, however, quantum effects play a significant role in determining the behaviour of the system. Dr Orús believes that by studying such a system using tensor networks, the path towards a unified theory would be clear: the equations of gravity would be nothing but those governing the quantum many-body entanglement. This deep connection between quantum physics and gravity has become increasingly evident in recent years.

It is fitting that the very mathematical concept that allowed Einstein to make his most important discovery, in a more advanced form, could soon provide us with a more advanced understanding of the consequences of his work. 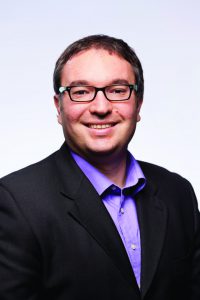 Dr Román Orús is a Junior Professor of Condensed Matter Theory at the Johannes Guttenberg Universität in Mainz, Germany. After obtaining his degree and PhD in Physics at the University of Barcelona in 2006, he has worked as a Research Fellow at the University of Queensland, Australia, and the Max Planck Institute, Germany, as well as visiting Professor at the Universitè Paul Sabatier – CNRS, France, and the Donostia International Physics Center – DIPC, Spain. In September 2018 he will become a tenured Ikerbasque Research Professor at DIPC and a Visiting Professor at the Barcelona Supercomputing Center. With research interests in the diverse applications of quantum many-body systems and quantum technologies, Dr Orús has achieved several awards for his work, including a Marie Curie Incoming International Fellowship, and the Early Career Prize (2014) by the European Physical Society. He has written around 60 scientific articles about quantum research (cited around 3000 times), and is Founding Editor of the journal Quantum, member of the ‘Quantum for Quants’ commission of the Quantum World Association, and partner at Entanglement Partners SL.