Warmer temperatures can cause mountain snowpacks to decline, especially at lower elevations and in dry climates. Since snow is the number one source of fresh water in many mountainous regions, it is important to understand how its loss will impact water supply for people, plants, and wildlife. Using innovative approaches, Dr Stephanie Kampf and her team at Colorado State University are identifying areas most vulnerable to losing persistent winter snow and how this affects soil moisture and streamflow.

The Problem of Predicting Streamflow

Water managers, particularly those in dry parts of the world such as the western United States, are constantly vexed by threatened water supplies. For this reason, Dr Kampf was naturally drawn to the subject. ‘I am a native of Colorado, a dry state in the Rocky Mountains where water availability is always a concern, so I have long been interested in improving our understanding of water processes in arid mountain regions,’ she explains.

Predicting river flow is challenging on its own, and it depends on understanding which snowpack regions are most vulnerable to warming. Traditionally, water managers and users have relied on data from snow monitoring stations to estimate streamflow in any given year, but found their predictions weren’t always accurate. Dr Kampf elaborates: ‘When I began working at Colorado State University, water users wanted to know why streamflow forecasts were not always accurate from year to year. Here in the Rockies, most of our streamflow comes from snowmelt, and water managers use snow monitoring stations high in the mountains to predict how much water will flow through rivers each year.’ The problem with high mountain stations is they are located far from river gauging stations, missing the middle elevations that cover more of the surface area of mountain watersheds. An important example for the research team is the Cache la Poudre, a Colorado river that originates from snowmelt in the Rocky Mountains. When Eric Richer, a former graduate student, developed models of streamflow in the Cache la Poudre, it became clear that most of the water in the river originated above a transition between intermittent and persistent winter snow. The high mountain snow stations were not low enough to document snow patterns near this transition area, so the team began to explore how they could identify where the snow transition is located.

The group used satellite remote sensing to develop a snow cover index that reveals patterns in snow coverage. Richer used the index to examine how snow patterns related to variables such as elevation, slope, solar radiation, precipitation, temperature and vegetation cover. He found that elevation was a dominant influence on snow patterns because it affected both temperature and precipitation. The index allowed Richer and others to identify three distinct snow zones: persistent, transitional and intermittent. Results from this also confirmed that the transitional zone, or the middle elevation, was an area in need of more monitoring, as it was the most sensitive to losing winter snowpack due to climate warming.

Dr Kampf points to both the Cache la Poudre and modelling studies as the reasons they are now homed in on their current research: ‘My research group started mapping snow patterns with satellite data, and we realised that we had no idea how much streamflow was coming from middle elevations, where there are no snow monitoring stations. Since climate projections suggest that snow elevations will rise, we set out to understand how loss of snow at middle (transitional) elevations affects streamflow.’

These unmonitored middle elevations are critical to understand because they are likely to lose their persistent winter snow in a warmer climate. Not only that, the group’s current research indicates that arid climates are more vulnerable to loss of permanent snowpack and resulting loss of freshwater flow. 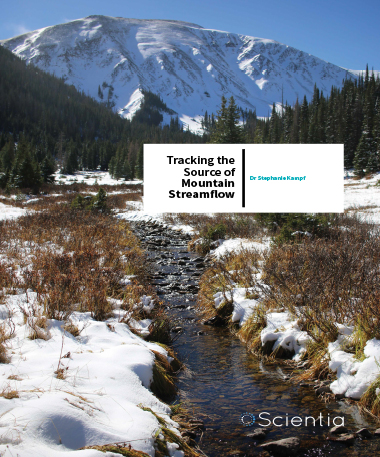 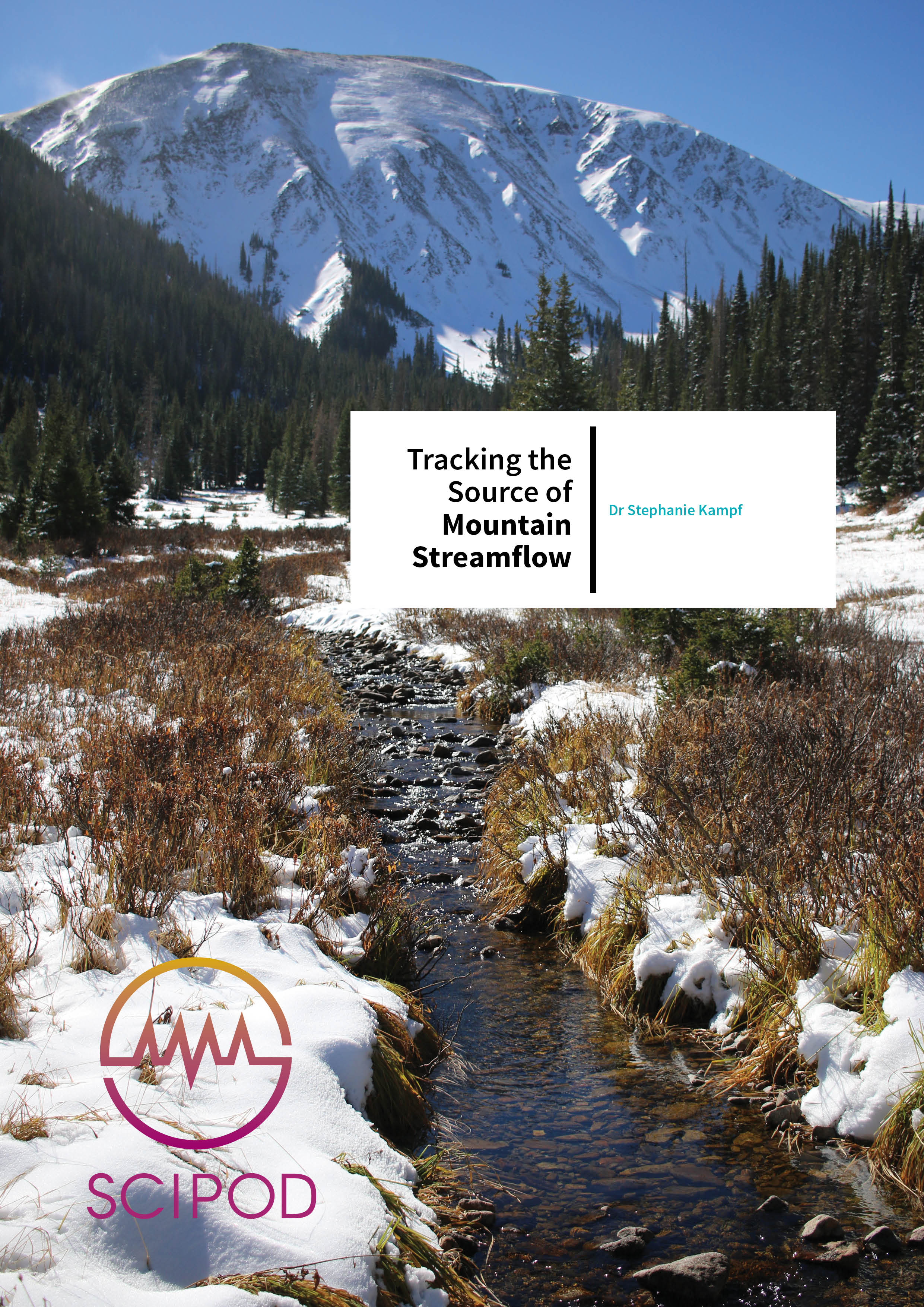 With funding from the National Science Foundation, Dr Kampf is driving her team towards a better understanding of these middle elevations and their snow patterns, especially in semi-arid climates. Specifically, they are looking at the ‘snow transition’, or the boundary between the persistent and intermittent snow zone, and how it affects regional hydrology.

Their project aims to see whether the loss of persistent snowpacks (and resulting loss of runoff) has a greater impact on arid than on wetter climates. They want to know how changes in the persistence of winter snowpacks will impact water supplies, so they are looking at connections between snow, streamflow and soil moisture in both wet coastal and dry interior mountain ranges of the western U.S.

Their first goal is to document the distribution of snow transitions in different areas of their study region. To do this, they are using point recordings from automated snowpack and climate sensors, collectively known as SNOTEL (snow telemetry), located in their study area. They’re also using spatial snow maps generated from satellite imagery known as MODIS (moderate resolution imaging spectroradiometer). Cara Moore, a former graduate student, used MODIS to map areas across the Western US. She identified areas where snow falls and melts several times over the winter (intermittent snow zone), areas where snow lasts until late spring or summer (persistent snow zone), and the area between intermittent and persistent snow called the transitional snow zone. She published her techniques and findings for a ten-year period from 2000 to 2010, and the research team has been continuing to update the maps since then.

The team’s studies already suggest that in these snow transition zones, there is a steep drop in streamflow compared to the higher elevation persistent snow areas. Areas with more persistent snow don’t seem to suffer as great of a loss of streamflow because the amount of moisture stored in the soil is high. In intermittent snow zones seen in more arid climates, however, the connectivity of water flow is often broken. As Dr Kampf explains: ‘Our findings suggest that persistent winter snow is particularly important for producing streamflow in dry regions because the concentrated snowmelt in the spring fills up the soil and allows more water to flow into streams and rivers.’

So, in a warming climate, this implies that already arid regions will be further troubled as permanent snow disappears and water yield declines. Snowpacks in dry places, it would appear, are on the frontline of susceptibility. 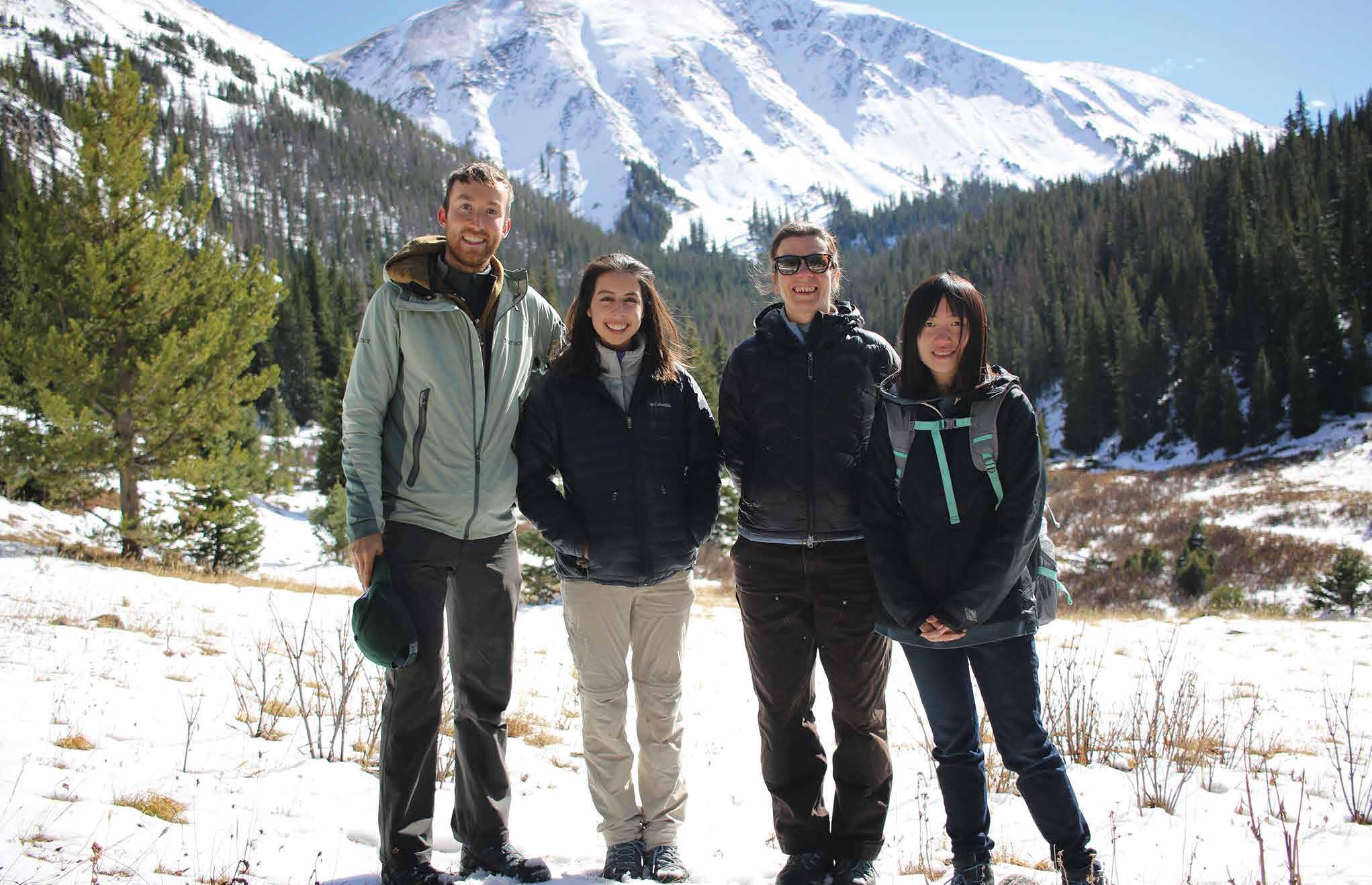 ‘Mountain snowpack is a primary source of water supply for mountain regions throughout the world. In a warmer climate, snowpacks are expected to decline, affecting both water supply and freshwater habitat.’ 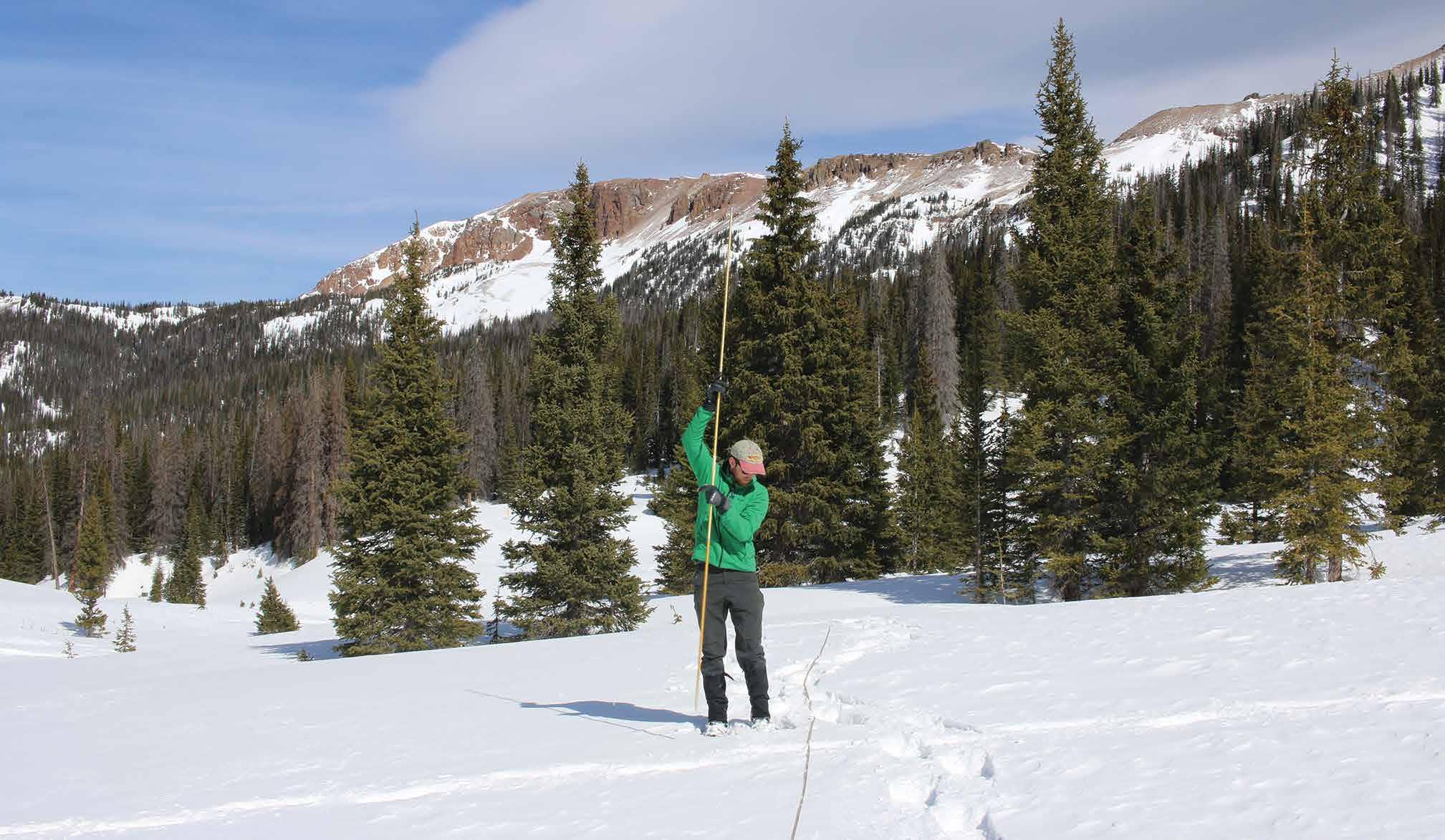 Lessons from a Flood and Other Applications

The snow zone maps that the team developed using MODIS satellite imagery have proven useful in other scenarios. For example, Moore’s snow maps were helpful in explaining how the peak flows in the devastating Colorado Front Range floods in 2013 related to prior peak flows in the region. In September that year, more than 200 mm of rain fell in a week after a slow moving cold front met up with warm humid air from the south. The storm runoff from this eastern Rocky Mountain range, which rises from 1,500 to over 4,000 meters in elevation, caused extensive flooding. This storm created the highest peak flows at many streams that usually peak during snowmelt.

While the 2013 storm itself was highly unusual, in a 2016 publication, Dr Kampf and her colleague Dr Michael Lefsky identified a regional trend of declining snowmelt contributions to peak river flow. It further reinforced that the snow transition zone was the area most sensitive to loss of snow.

Identifying sensitive snow transition zones with MODIS was also useful in another part of the world – the Andes Mountains. There, the countries of Peru, Bolivia, Chile and Argentina heavily depend on snow and glacier-melt for their water supplies but on-the-ground climate data are sparse. Using MODIS, Freddy Saavedra, a recent PhD graduate, defined snow climate regions throughout the Andes. His approach provided more information on regional differences than previous interpretations, which relied on temperature and precipitation data. Saavedra identified areas with declining snowpack and rising snow lines in central Chile and Argentina, and he is examining how changing snow patterns can be used to predict water supply in these areas. The researchers suggest that tracking these snow zones over time will help identify which are regions are more susceptible to climate change.

Understanding this relationship between persistent snow and streamflow in semi-arid climates such as those in the southern Andes Mountains and western United States could help water and resource managers deal with the challenges of a changing climate. This is particularly important for areas with few or no physical monitoring stations.

Dr Kampf explains that after analysing connections between snow, soil moisture and streamflow, they are moving towards a better understanding the processes involved. PhD student John Hammond will be working with Dr Adrian Harpold of the University of Nevada in Reno to evaluate how soil moisture is affected by rain and snow. Other collaborators are examining related topics such as quality of snow data, persistence and connectivity of streamflow in different snow zones, and how soil water nitrogen is affected by snowmelt patterns.

The team plans to make their datasets public as well as develop maps of snow and streamflow patterns for both researchers and resource managers. Hammond and Saavedra are finalising their updated snow maps for the western U.S. and releasing the processing code to enable others to develop these maps in different regions. In related research, Hammond, Kampf, and collaborators at Colorado Mesa University have established field monitoring sites for the mapped snow zones in eastern and western Colorado.

The team hopes that their map products, streamflow and soil moisture analyses for the western U.S., and field measurements will provide insights for water resource management in a changing climate. 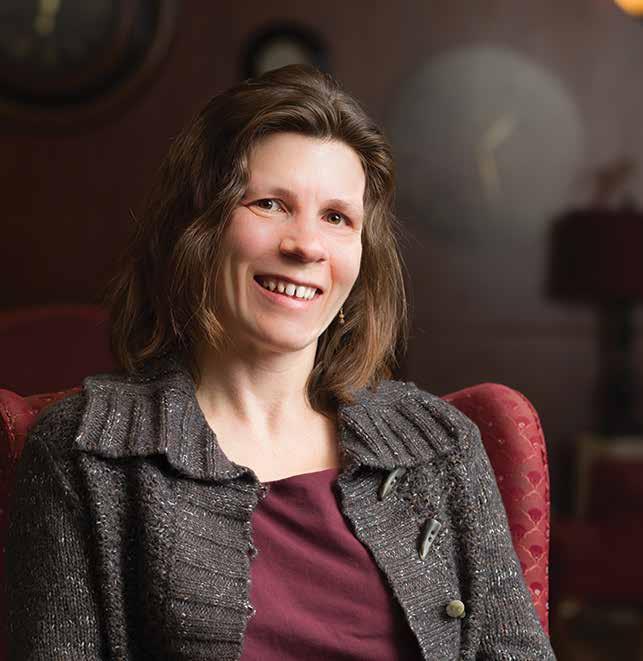 Dr Stephanie Kampf received her PhD from the University of Washington in 2006, after obtaining her MSc in Hydrogeology in 2002 at the University of Nevada in Reno. She is currently an Associate Professor at Colorado State University in Fort Collins, Colorado, where she teaches hydrology and watershed science. Dr Kampf’s research focuses on how hydrology is affected by climate and landscape. She has authored or co-authored more than 30 articles and served on over 90 graduate committees.