Saccharomyces cerevisiae yeast is the primary microorganism for making fermented beverages such as beer, wine and sake. However, ensuring efficient and high-quality fermentation requires the use of genetic engineering. Most consumers are opposed to the idea of genetically modified yeast for beverage production. Dr Susann Fischer and Professor Thomas Becker of the Technical University of Munich are finding new ways to manipulate the desired traits inherent in yeasts, to replace the use of genetically modified organisms (GMOs).

Saccharomyces cerevisiae is a species of yeast that has been instrumental to winemaking, baking and brewing for hundreds of years. In nature, yeast cells are found primarily on ripe fruits such as grapes and for humans their primary value has been in converting sugar to alcohol.

There are many strains of yeast and growth rates and other traits vary enormously between both strains and growth environments. In 1996, the genome, or entire genetic makeup of Saccharomyces cerevisiae was unravelled. Since that time, research in the field of genetic engineering of yeast has drastically increased and this yeast strain is now one of the most intensively studied organisms in molecular and cell biology.

Yeast strains can vary enormously in flavour, clarity, amount of alcohol produced and aroma. Brewers might want to delete or tone down toxic and unpalatable compounds in the final product or produce a more stable foam. For wine, reducing acetic acid content is desirable. These traits can be fine-tuned genetically by crossing strains. For example, a specific flavour can be eliminated or increased by cross-breeding. The same gene may be present in two strains of yeast – however, it might produce more flavour in one of the strains depending on the behaviour of the associated gene.

Cross-breeding strains can be slow. Genetic-modification tools could improve upon this and address other limitations that brewers face. However, in most countries there are strong consumer and government concerns around genetically modified yeasts, or those that possess DNA sequences that have been altered using genetic engineering techniques. 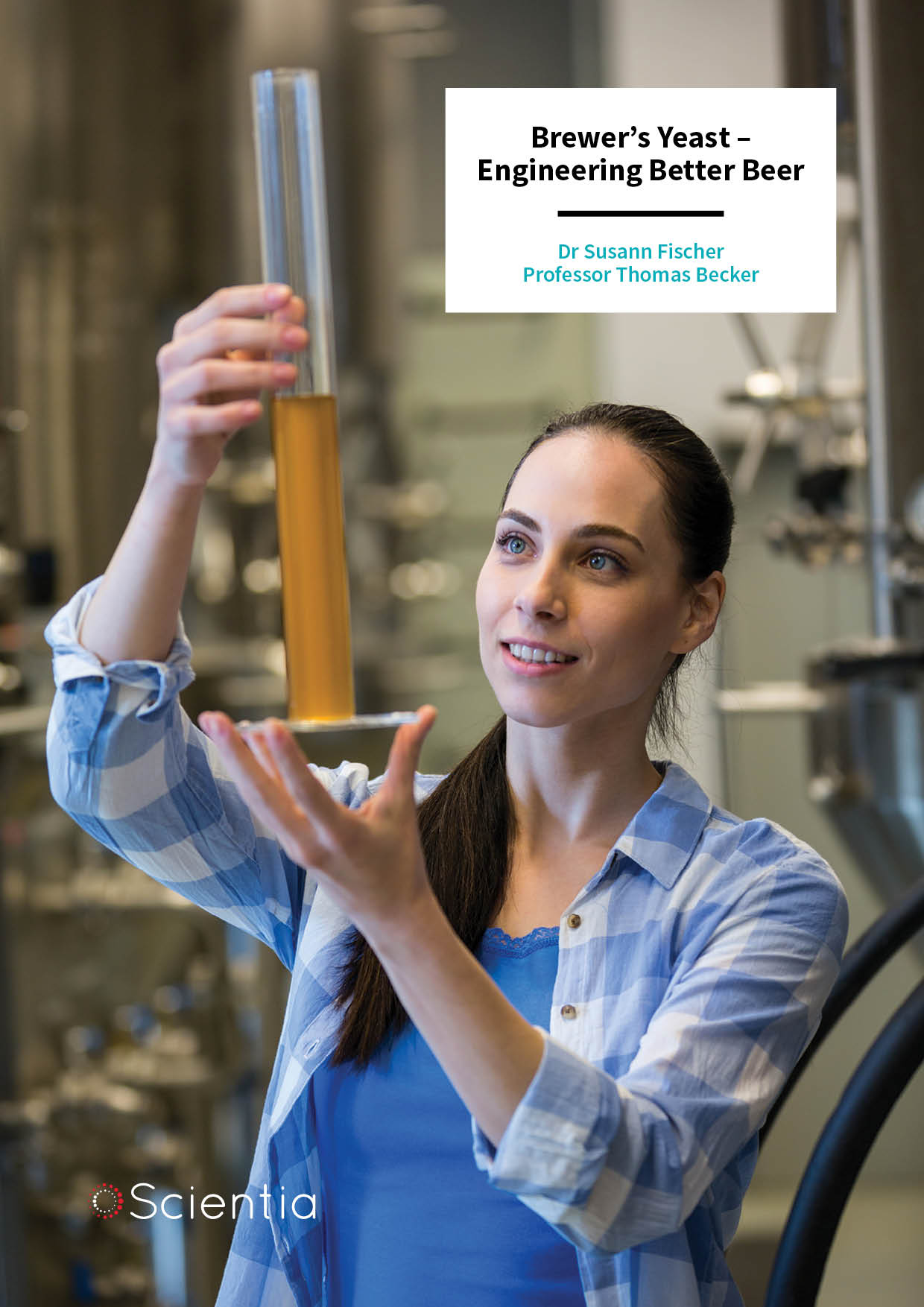 ‘The metabolic processes of yeast during industrial fermentation have been comprehensively investigated’ – Fischer. 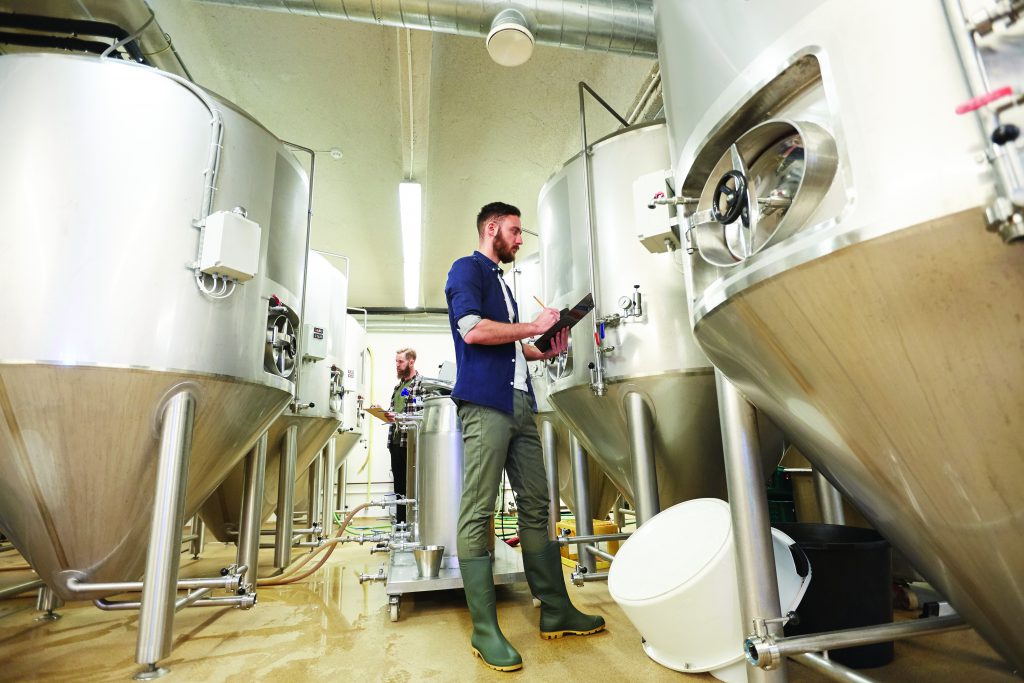 Among consumers, the primary concern is that genetically modified yeast could harm their health. Government regulatory bodies are concerned that if the yeast strains escape the laboratory or brewing facility, they may harm the surrounding ecosystem or populations of wild yeast. Concerns of consumers are perhaps unfounded in that unlike genetically modified foods such as corn or meat, yeast is not designed to be consumed and is filtered out of the final product. However, more research is needed to address environmental concerns as yeast is released into the environment through discharge after the production process is complete.

The regulation of the use of genetically modified organisms in the food and beverage industry is dependent upon each individual country’s laws. There are only two authorised genetically modified wine yeast strains in Canada and USA that are still in use. One, called ML01, lacks the genes for producing a chemical that gives some wine drinkers headaches.

In the USA beer producers have been reluctant to take a risk on consumer tastes and have avoided marketing beer made with genetically modified yeast, instead relying on cross-breeding strains to optimise yeast for unique brewing conditions or specific traits. New ways of engineering yeast without the need for genetic modification are sorely needed in order to meet the challenges of brewing new beverages and bringing them to market in a timely manner. 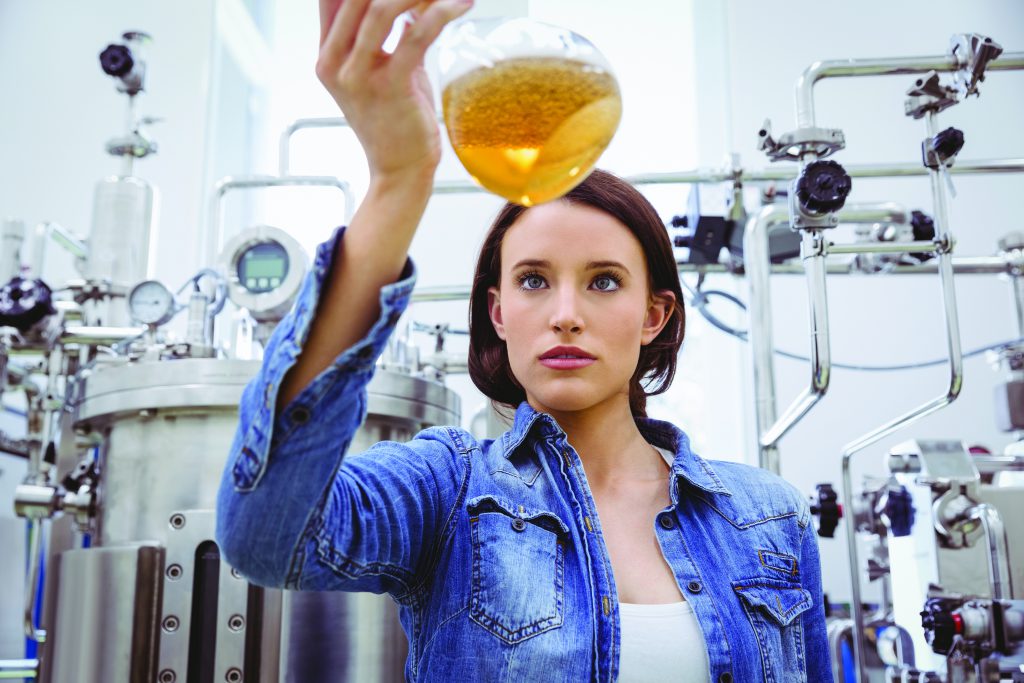 To improve desirable traits in industrial yeast without using genetic modification techniques, strains can be crossed to generate traits desirable to the brewer. However, this technique is slow and can be difficult to optimise. At the Technical University of Munich at the Chair of Brewing and Beverage Technology, researchers Dr Susann Fischer and Professor Thomas Becker are developing methods to engineer brewing yeast under specific conditions such as elevated temperature and alcohol content, without the explicit use of genetically modified organisms. It is hoped that in the future they can select for specific traits without the need to introduce foreign DNA into yeast cells.

Dr Fischer explains that during the fermentation process, there are, ‘differences in temperature, pressure, oxygen and nutrient starvation that induce the genetic regulation of stress response genes,’ allowing the yeast to adapt to the stressful growth conditions. When the yeast cells are stressed by any of these factors, stress response genes, such as heat shock protein (HSP), are turned on or ‘induced’ and the cells adjust cell protein levels produced by those genes. For example, when the alcohol concentration in the vessel is adjusted, the activity of key genes is affected and the rate at which the yeast comes to the surface out of the suspension can speed up or slow down depending on the temperature.

‘The metabolic processes of the yeast during industrial fermentation have been comprehensively investigated,’ says Dr Fischer, who explains that in the team’s current research, variations of these types of stresses were used to purposely increase, or ‘induce’ protein levels in the yeast cells at the genetic level.

Current induced gene expression systems normally rely on the addition of substances such as the sugar galactose and the metal element copper that are prohibited for producing food and beverages. The scientists instead chose to focus on the use of varying temperature and alcohol levels of the fermentation reaction to stimulate or induce gene expression.

This works by indirectly stimulating short stretches of DNA located upstream of a gene, called promoters. Promoters are essential for turning on and controlling gene expression – the production of a protein corresponding to a gene. During induction, the inducer – heat or alcohol – has an effect on the promoter, resulting in an increase or decrease in protein levels produced by the gene under its control. The brewing industry needs to find promoters that can be strictly regulated during fermentation and produce powerful control of the target gene.

In a study to develop a method for promoter screening under brewing conditions, five promoters for heat shock genes native to Saccharomyces cerevisiae ale yeast were investigated. The team did this using a range of temperatures and alcohol concentrations, using a green fluorescent label produced by a reporter gene whose brightness can be measured and is in proportion to the strength of the activity of the promoter. The team then used this method to study ten different promoters in Saccharomyces pastorianus.

Dr Fischer and Professor Becker evaluated promoters from the lager beer yeast Saccharomyces pastorianus at different temperatures as well as various alcohol concentrations that could be encountered during the brewing process. These stressful conditions are common in industrial fermentation. The team then worked to evaluate the promoters of different stress-related genes.

The induction or activity patterns of ten different promoters found in this yeast were evaluated under stressful conditions that could occur during industrial brewing fermentations, such as temperature shifts that occur during the transition from fermentation to maturation as well as higher alcohol content.

The team went on to design and produce targeted gene expression in industrial yeast using stress-responsive promoters in strains of the industrial brewing yeast Saccharomyces pastorianus. The team constructed yeast to overexpress the gene alcohol acetyltransferase (ATF1) under the control of promoters that can be controlled by temperature changes. Dr Fischer and Professor Becker showed that the sequence of temperature changes had a major impact on gene expression patterns in their yeast strains and the alcohol produced. The team demonstrated for the first time the idea that temperature induced gene expression of industrial yeast could be used in the future for optimisation of beverage fermentation.

The Future of Engineered Yeast

The team plan to continue investigating the use of different promoters in yeast. More knowledge of potential inducible promoters to control the activity of relevant genes is needed for the expression of different genes in industrial yeast for producing wine, beer and sake. Up until now, little attention has been paid to the strength of gene induction when cells are exposed to temperature and alcohol stress in an industrial setting.

By looking at the activity of various promoters found in brewer’s yeast, Dr Fischer and Professor Becker will continue to investigate how various temperatures and alcohol concentrations can affect the aroma and other protein levels that affect the product that is produced, in various strains of Saccharomyces cerevisiae and the lager beer yeast Saccharomyces pastorianus.

In future experiments, Dr Fischer will fine-tune her previous work on gene expression in industrial fermentations and will attempt to transfer the results to other biological systems to investigate their effectiveness. By harnessing the power of techniques developed by Fischer and Professor Becker, eventually, brewers will be able to provide new solutions to replace the genetic engineering of yeast and invigorate the market by bringing new varieties of beer, wine and sake to a new generation of consumers. 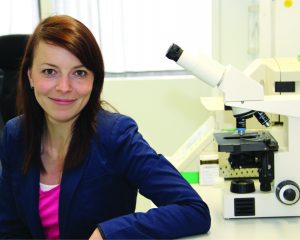 Dr Susann Fischer is head of the AG Beverage and Cereal Technology working group at the Technical University of Munich (TUM), where she has been a group leader since 2015. Her doctoral work is focused on Temperature-induced gene expression in Saccharomyces yeast. She obtained her MSc in the Department of Microbiology and Biochemistry at the University of Applied Science Wiesbaden, Research Center Geisenheim, Germany. Her Master’s thesis focused on the analysis of aroma-relevant genes of the nonSacharomyces yeast Hanseniaspora uvarum. Her current work examines temperature induced gene expression in Saccharomyces yeast.

Professor Thomas Becker has held the position of Chair of Brewing and Beverage Technology at the Technical University of Munich (TUM) since 2009. Previous to this Professor Becker was a lecturer in fluid mechanics and process automation at TUM as well as the Chair of Process Analytics and Grain Technology at the University of Hohenheim in Stuttgart, Germany. He achieved his doctorate at the Chair of General Chemistry and Biochemistry at TUM (1995). His current research focuses on using modern biotechnological techniques to meet challenges in the food production industry such as the processing of plant raw goods and their food end products including beverages and beer.