At Bonbouton, Linh Le and his colleagues are creating a ground-breaking new range of wearable healthcare technologies. These products can track vital signs such as skin temperature and muscle motion, empowering people with the knowledge and data they need to monitor and maintain their own health.

Recent advances in microelectronics have opened the door for the development of a range of new wearable healthcare technologies. From monitoring chronic conditions such as asthma, to detecting the onset of an epileptic seizures, these devices are revolutionising how patients are cared for.

Linh Le and his team of scientists at Bonbouton are developing a whole new category of wearable healthcare technologies, powered by integrated graphene sensors that can measure and track important body vitals. With their extensive experience and track record in graphene nanotechnology breakthroughs, the scientists at Bonbouton are working to develop and release a range of products to the market that undeniably have immense scope for changing the field of healthcare.

Graphene is a widely applicable nanomaterial with uses spanning from energy storage and electronics to touch screen technology and solar powered cells. Through a patented method involving the inkjet-printing of graphene, the team at Bonbouton has created ultra-thin and ultra-flexible sensing elements, including thermal, pressure, and potentially sweat analysis, that can be embedded in clothing. Bonbouton’s aim is to develop unobtrusive and comfortable ways for people to look after their health on a wide scale.

Founded by Linh Le, along with several other founding team members, Bonbouton’s vision is to produce a range of wearable technologies that are at the forefront of a digital healthcare breakthrough. Bonbouton’s mission is simple – to provide people with the knowledge they need to make wise decisions about their own healthcare. 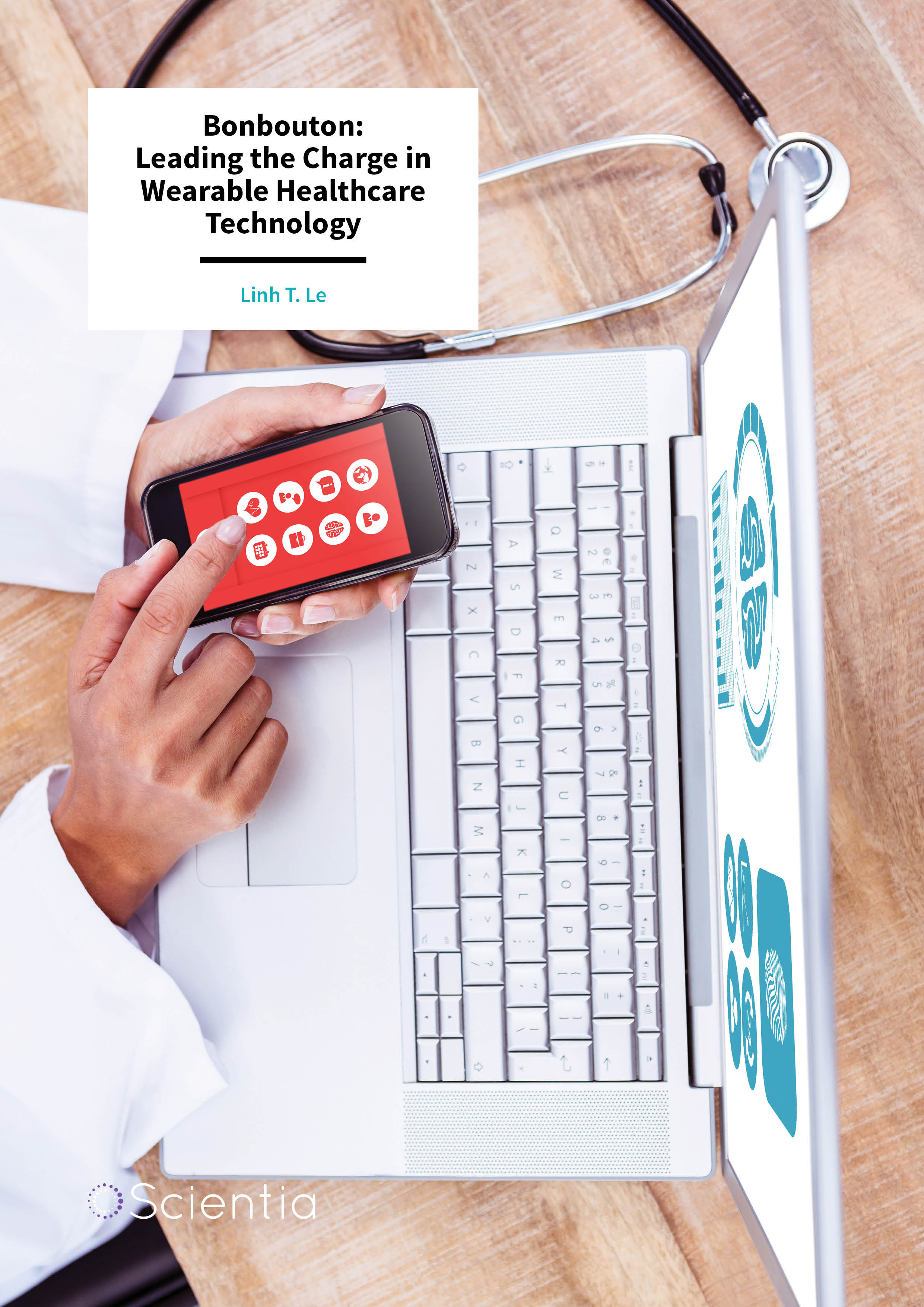 ‘Because of its extraordinary flexibility and thinness, we envision that our “comfortable-to-wear” graphene sensor arrays can be used for constant and wireless monitoring of a variety of pathophysiological developments’ 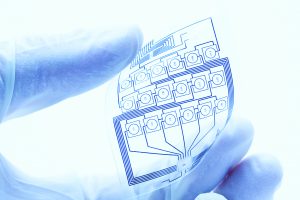 As the CEO of the Bonbouton, Linh is passionate about developing technologies that can detect diseases early, so that early intervention can help to stop the progression of disease. ‘My father passed away in 2015 because of cancer,’ he says. ‘When he was diagnosed, it was already too late. That’s why my current project is related to the early detection and prevention of a disease.’

Linh studied and refined graphene printing technology since his days as a doctoral student – research that ultimately led to the inkjet printing method of fabricating Bonbouton’s graphene thermal sensors. Together with Malcolm, who has a background in the neurobiology of thermoregulation, the two put together their idea to combine materials and medical applications to create healthcare technologies.

To make their products, the team embedded their sensors into ordinary apparel. When embedded, the thin and flexible graphene thermal sensors allow unobtrusive measurements of important parameters to be taken. ‘Because of its extraordinary flexibility and thinness, we envision that our “comfortable-to-wear” graphene sensor arrays can be used for constant and wireless monitoring of a variety of pathophysiological developments,’ says Linh.

A Bright Future for Diabetes Management

At present, the scientists at Bonbouton are working to release their very first product to hit the market – a proprietary smart shoe insole that monitors foot temperature to detect early signs of ulcers in diabetic patients. The extreme thinness and flexibility of Bonbouton’s graphene sensors allow them to be embedded into insoles that can be comfortably worn by diabetic patients.

In both type 1 and type 2 diabetes, foot ulcers are a common and often devastating complication – arising due to reduced blood flow in the feet, and a decreased healing ability. This preventable condition can be extremely painful and serious, and in some cases, amputation of the foot may be the only solution. In the US alone, approximately 70,000 diabetic individuals lose limbs every year, which costs the healthcare system an estimated 15 billion dollars. 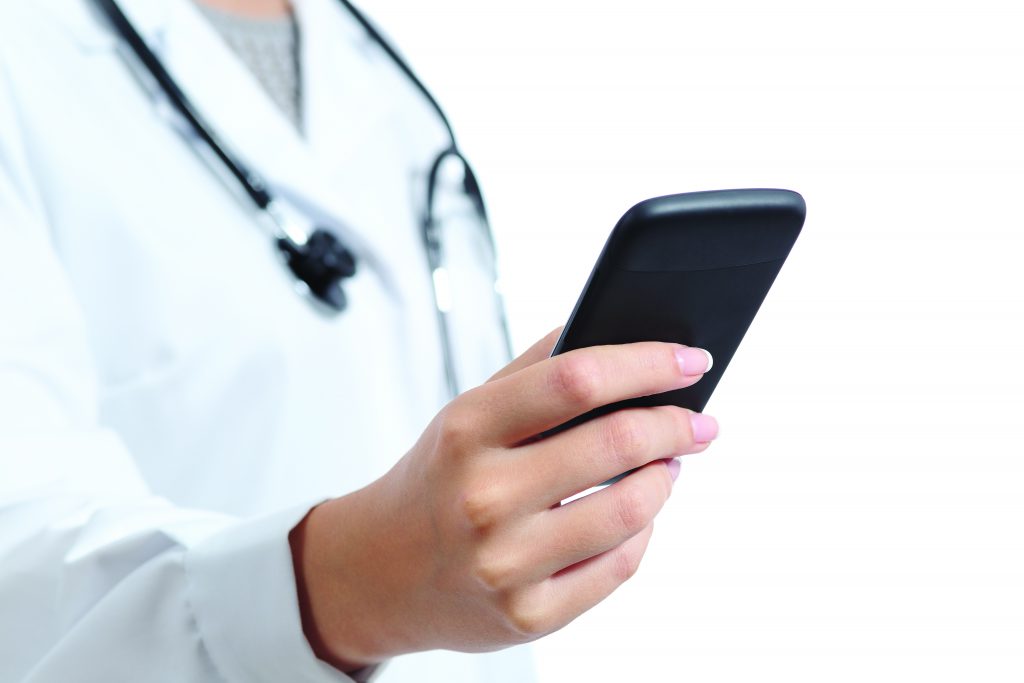 The insoles constantly monitor foot temperature and pressure and send this information in real-time to Bonbouton’s app, which stores detailed historical data that a patient, physician, or caregiver can review. If temperature or pressure discrepancies are detected between the left and right foot – one of the early signs of a foot ulcer – the patient is immediately notified and steps can be taken earlier in the treatment continuum to prevent the ulcer from developing.

So far, Bonbouton has been widely credited for this breakthrough innovation, and has gained a spot in the Digital Health Breakthrough Network’s Spring 2017 class. The company has also won the Smart Clothing category of the Wearable Technologies Innovation World Cup of 2017, was accepted into the prestigious Entrepreneurs Roundtable Accelerator, won second place in the 2018 Diabetes Innovation Challenge, was a diabetes care finalist in the Nolahi Challenge and was also a finalist at the Lyfebulb-Novo Nordisk Innovation Summit 2017. 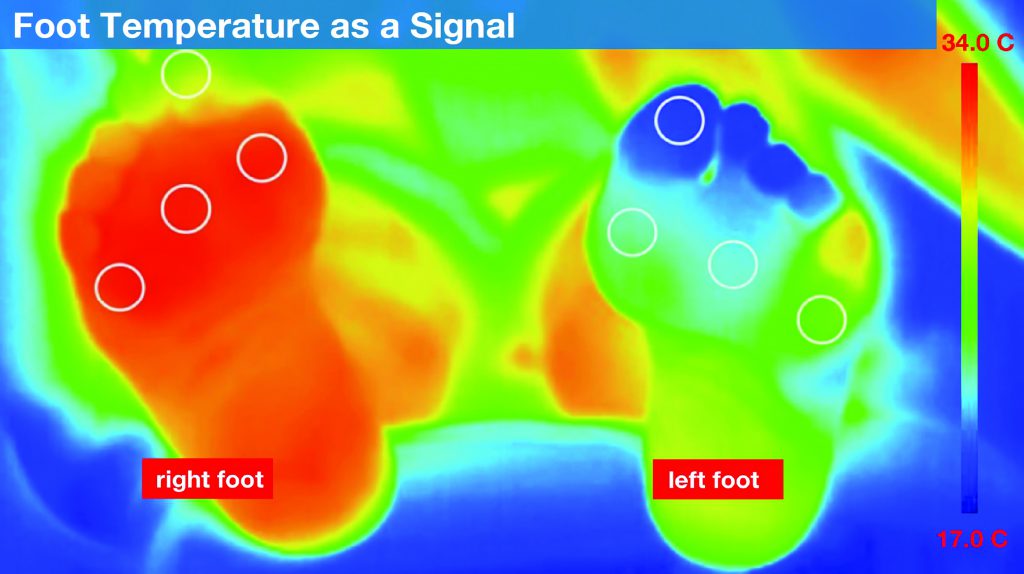 The Science Behind Bonbouton’s Technology

Since its discovery around a decade ago, graphene has gained a reputation as a highly desirable nanomaterial. Comprising single layers of strongly-bonded carbon atoms, graphene sheets possess the properties of high mechanical strength and flexibility, making it possible to create very flexible and thin sensors out of this nanomaterial. Importantly, it also exhibits high electrical and thermal conductivity.

When developing their technology, Linh and his colleagues at Stevens Institute of Technology experimented with inkjet-printing methods using graphene ink to produce electrically conductive graphene electrodes (electrical conductors), which were then used to produce the thermal sensors in Bonbouton’s prototypes.

The inkjet-printing method, invented and patented by Linh and his team, involves the use of graphene ink that is created by suspending graphene oxide flakes in pure water. The reason for involving graphene oxide in the production process, rather than directly printing graphene electrodes, is that graphene is hydrophobic. This means that when graphene is dispersed in water to produce ink for printing, it segregates and does not form a stable dispersion.

While this problem can be counteracted by adding surfactants (such as detergent), this is an undesirable solution as surfactants reduce the ability of the end-product electrodes to store electric charge. To solve this problem, Linh proposes the use of graphene oxide flakes to produce inks for printing, which can easily and stably be dispersed in water.

The result of the inkjet-printing process is the production of graphene oxide nanosheets stacked on top of each other. To transform the printed graphene oxide into graphene electrodes, Linh’s patented method then involves chemical and heat treatment on the nanosheets – a process known as thermal reduction – which can be done using an infrared heat lamp set to around 200°C.

This method is highly advantageous for producing graphene nanosheets, because of its ability to precisely print electrodes very close together – in the form of stacked sheets. In addition, the technique makes use of widely commercially-available inkjet-printers, with some degree of modification.

Linh and his team not only found an easier and commercially viable way to produce flexible graphene electrodes, which they initially envisioned could be used to produce micro-supercapacitors (devices that store electrical charge) for biomedical purposes, but they also discovered that graphene behaves as a ‘negative temperature coefficient’ material. This means that graphene is a highly temperature-sensitive nanomaterial that experiences a rapid reduction in electrical resistance when the temperature increases. This key property was crucial for the Bonbouton scientists to realise that their very thin, flexible and transparent inkjet-printed graphene electrodes were ideal for producing wearable thermal sensors.

Indeed, graphene thermal sensors are widely credited for being very unique temperature-sensitive materials, as their flexible and thin nature makes them ideal for making intimate skin contact. Unlike other more obtrusive and slower to respond temperature-sensitive materials – which are usually ceramic, silicon or metal-based – graphene is a particularly conformal material, and graphene thermal sensors are thought to be very well-suited for providing long-term measurements of various vital signs. 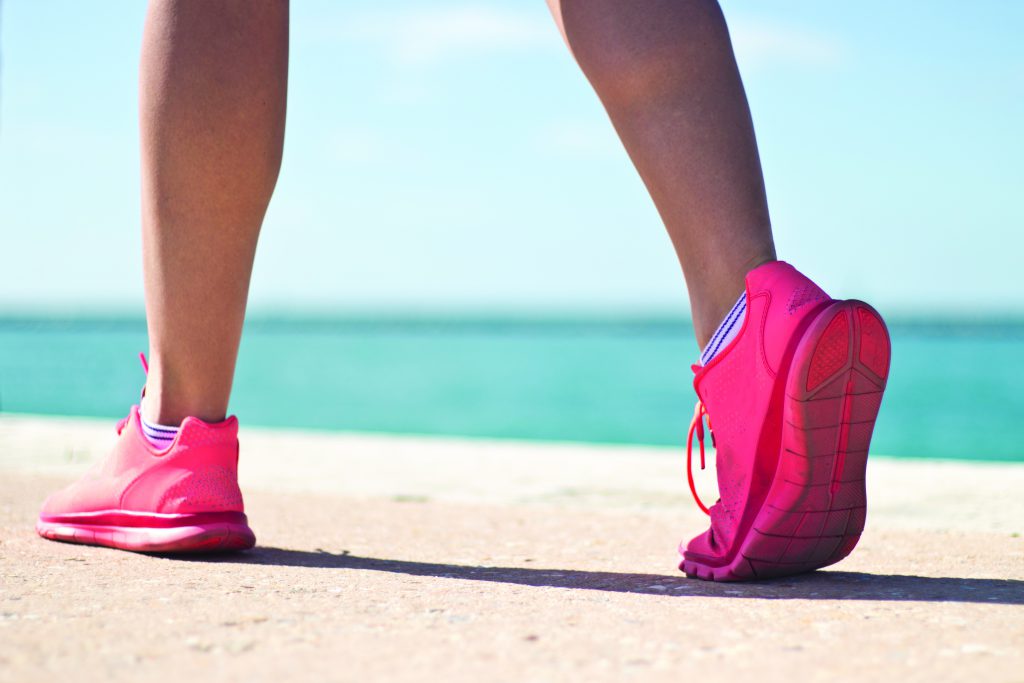 The scientists at Bonbouton are continually working to improve and broaden the applicability of their unique graphene thermal sensors. The team has noted the impact of several factors on the overall efficiency of the graphene electrodes, like the spacing between ink droplets, and have more recently launched further studies that delve deeper into the sensing reliability of graphene oxide materials.

Since the company’s inception, the founding team at Bonbouton has aspired to create wearable technologies that could help people track their health and alert users of various oncoming conditions. Today, using graphene thermal sensors embedded in everyday clothing, Bonbouton has made remarkable strides with their innovative technologies, paving the way forward for a new era of self-reliance and independence around personal healthcare. 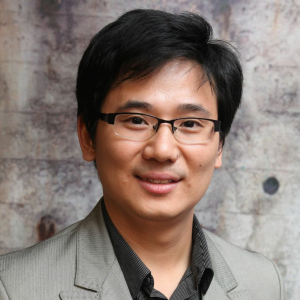 Linh Le is the founder and CEO of Bonbouton. He was awarded his BSc in chemistry at Vietnam National University, graduating in the top 1%, followed by a Master’s degree in chemical engineering at Columbia University. In 2012, he achieved a graduate certificate in project management from the Stevens Institute of Technology, where he also worked as a research assistant and technology transfer associate. Since 2015, while working with graphene technology at Bonbouton, Linh has co-invented and patented six graphene technology methods involving inkjet-printing, including a 2015 patent on wearable graphene sensors. His research has led him to be chosen as an ‘Imagine If Deep Tech’ Finalist for the Innovation Forum, in addition to receiving many other honours, such as an Excellence in Research Award and an Inventor of the Year Award in 2012, to name just a few. Outside of his work, Linh is an enthusiastic long-distance runner, and recently acquired the title of ‘ultra-marathoner’.