Bees are particularly important pollinators, with over 16,000 bee species known worldwide. Some bee species are social and have colonies with castes, a queen, workers (females) and drones (males), but over 85% of the known bee species worldwide are solitary.

The European honey bee, Apis mellifera, is probably the best-known bee species due to its extensive use as a managed pollinator in agriculture. It is a highly social bee and a single colony can be home to over 60,000 individual bees. Honey bees make honey and have perennial colonies, meaning that a colony persists over many years.

Stingless bees represent a second group of highly social bees. They also make honey but typically less than honey bees. Stingless bees occur in most tropical and subtropical regions of the world. The third group of social bees is the bumble bee. Bumble bees do not make honey but store nectar in the hive. Bumble bee colonies are smaller, with between 50 and 250 individuals depending on the bee species. Bumble bee colonies are annual – new queens are produced in the fall, they hibernate and the ones that survive the winter start a new colony in the spring.

Both social and solitary bees contribute to crop pollination and to the pollination of wild plant species. Some of the managed pollinators widely used in agriculture include the honey bee, the alfalfa leafcutting bee, Megachile rotundata, and the blue orchard Mason bee, Osmia lignaria. While solitary, the latter two bee species nest in aggregation, a trait that facilitates their management.

Although we consume a root when eating carrots and a stem when chewing on celery, pollinators are needed for seed production, which permits the perpetuation of carrot and celery varieties. You need to plant carrot and celery seeds in your garden to grow carrot and celery plants. In addition, bees are required for seed production of alfalfa, a major forage crop. Alfalfa is a major component of the forage used to feed cows, including dairy cows, and is an important component of chicken feed. A lack of pollinators would negatively impact beef and chicken production together with the production of milk and other dairy products.

From wild plants to vegetables to dairy products, a shortage of pollinators would have serious implications for both human food security and the environment. 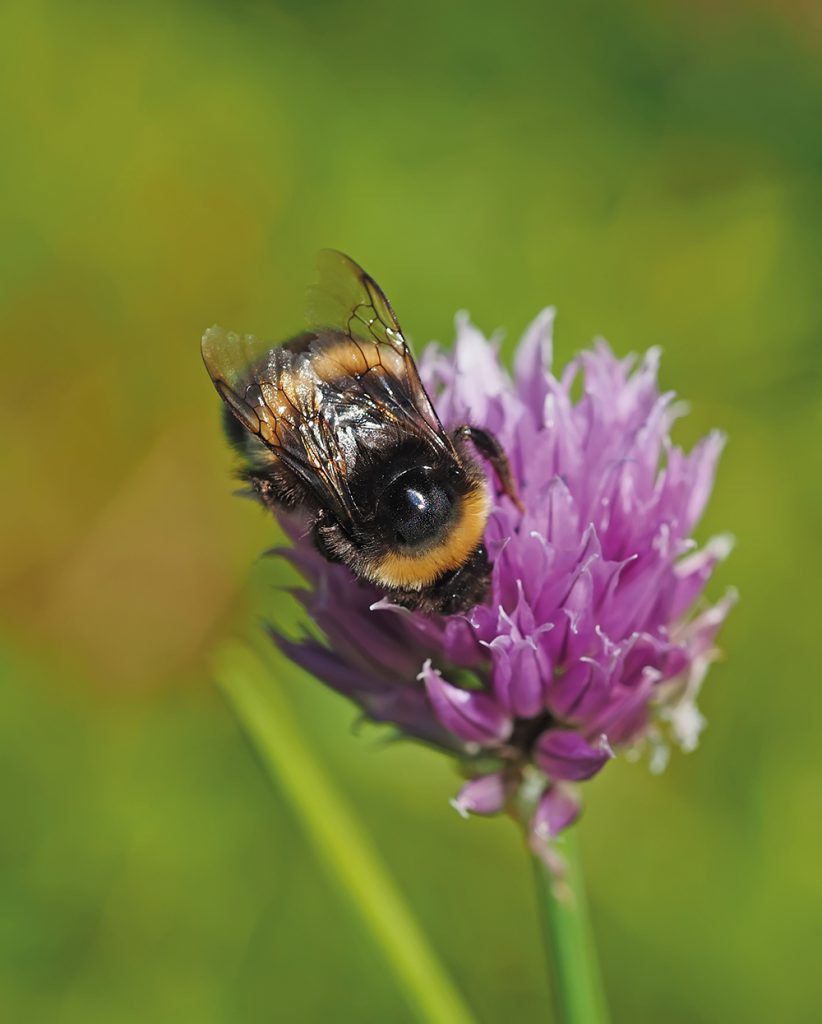 Unfortunately, bees are in decline, and this decrease in bee populations affects both managed and wild bees alike. The decline in bee species has been documented worldwide, although some countries have stronger historical records for wild bee species.

In European countries that have good historical records for wild bees, comparing data from these records to more recent data has shown clear evidence of decline in bee species richness (number of species), frequency (abundance of species), and distribution (range). In a large-scale study, species richness or the number of bee species had declined by 40% in the United Kingdom and 60% in the Netherlands.

Although the United States, Canada and Mexico do not have strong long-term monitoring or baseline data for wild bee species, records of bee decline exist, and four bumble bee species have been put on the Xerces Society for Invertebrate Conservation Red List of at-risk pollinator insects of North America.

The decline in honey bees resulting from Colony Collapse Disorder has helped bring public awareness to this serious issue of pollinator decline. Different strategies are being deployed to improve pollinator habitats and educate the general public about pollinator conservation. There is also increased research for the development of management strategies for other bees, such as the blue orchard bee, Osmia lignaria, for use in crop pollination. Hopefully, the methods implemented to help maintain pollinator populations will be successful such that we can avoid the extremely negative consequences of pollinator loss on crop and wild plant reproduction. 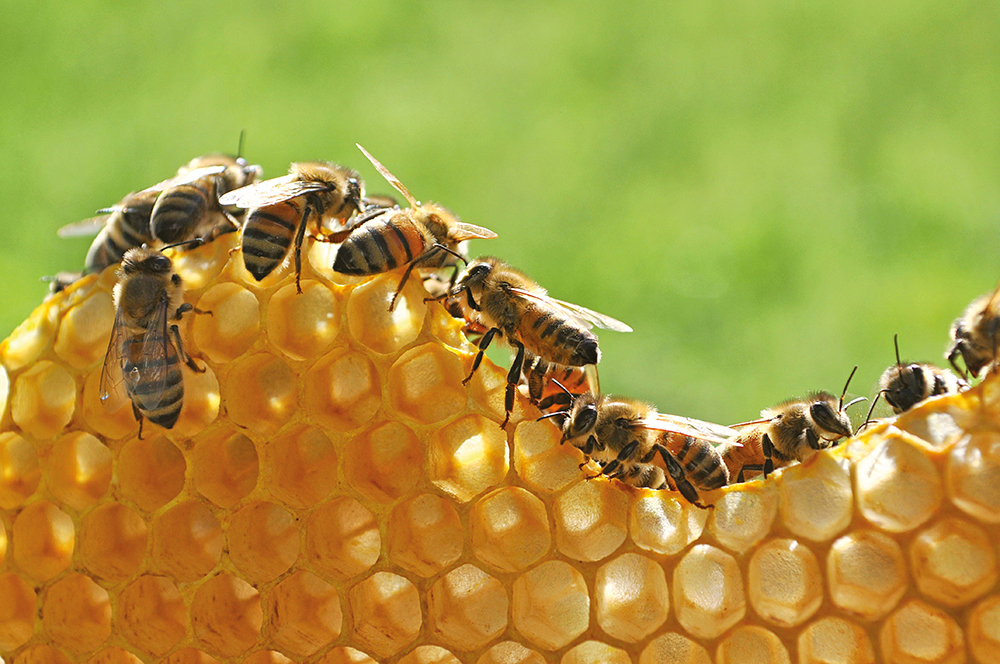 The decline in pollinators and bees has been attributed to various causes – the three major culprits are pests and pathogens, exposure to agrochemicals and habitat loss and degradation.

Bees feed on pollen and nectar provided by plants – pollen is the major source of proteins and lipids, while nectar provides bees with sugars and other micronutrients. Bees need a variety of plants to maintain themselves and, for social bees, to preserve a healthy colony. Habitat loss and degradation affect the quality and quantity of food sources available to bees, negatively impacting bee health.

Moreover, many bees are ground or cavity dwellers and must find bare ground or empty cavities where they will lay eggs and set up the next generation. Habitat loss and degradation reduces the availability of suitable nesting sites. Expansion of human dwellings and the use of large acreage for agricultural monoculture can both affect the abundance and suitability of habitats. Larger crop acreages reduce the availability of bare ground or empty cavities for bees to nest, while also lowering the diversity of plant species available to bees, especially if weeds are controlled. By lowering the plant species diversity available to bees in space and time, and diminishing the availability of good nesting sites, habitat loss and degradation negatively impact bee health.

Different pathogens and parasites threaten bees. These have been best studied in honey bees. Varroa mites can cause serious damage to honey bee colonies and are responsible for the loss of many colonies each year. Tracheal mites are internal parasites of honey bees and have been detected in the colonies of various wild bumble bee species, although we know less about their impact on colony health. American foulbrood, caused by bacteria, is a serious disease of honey bees, while chalkbrood, a fungal disease, seriously impacts alfalfa leafcutting bees. The gut parasite Nosema, a protozoan, together with new emerging diseases, caused by different viruses, negatively affect honey bee and bumble bee health. The impact of these pathogens and parasites can be exacerbated by other factors such as poor nutrition, which itself can result from habitat loss and degradation.

However, pesticides can also have sublethal effects on bees, meaning that they do not kill the bees but still have a negative impact. Sublethal effects can include impairing or affecting the navigational and foraging abilities of bees. Spatial learning helps the bee locate its nest, while associative learning allows the bee to make the association between plant traits and floral rewards, which helps a bee optimise reward collection during a foraging trip. With fewer foragers returning to the hive, or fewer bees finding their nest, less food is brought back to the hive or the nest to feed the young (social bees) or provision the eggs (solitary bees). Moreover, limited associations between floral traits and floral rewards will lower the foraging efficiency of bees and impact the quality and quantity of food brought back to the hive or used as provisions. Therefore, the use of pesticides can seriously impact bee nutrition, which itself can affect bees’ susceptibility to diseases.

Colony Collapse Disorder (CCD) is probably the best-known case of bee decline. It has been affecting honey bees since 2006 and the most striking symptom of CCD is the low number of adult bees in the hive with the absence of dead bodies. Foragers and nurse bees leave the hive and do not return. While the queen and broods are fine, there are few adult bees present in the hive, and in the absence of bees taking care of the young and bringing food, the hive collapses. No single factor can explain CCD and multiple factors seem responsible.

As explained earlier, the various factors affecting honeybees include pathogens, such as new emerging diseases caused by different viruses, the Varroa mites, the gut parasite Nosema, pesticides and poor nutrition. These factors can interact with one another, where habitat loss or pesticides can lead to poor nutrition and poor nutrition makes bees more prone to disease.

‘Humans depend on plants and plants depend on pollinators. A balance must be maintained in order to sustain life on earth and protect human survival and health.’ 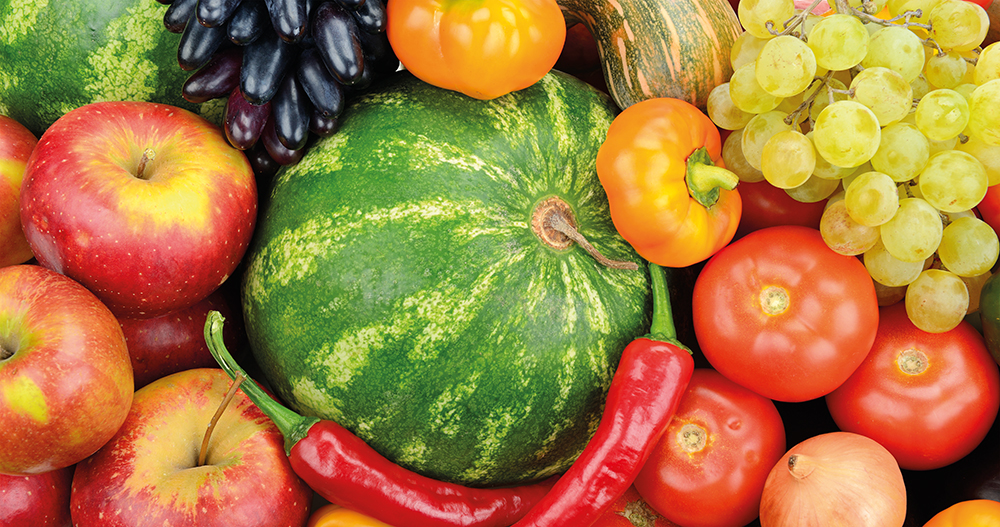 Habitat degradation and fragmentation result mainly from the expansion of human dwellings and from a more extensive use of the land for agriculture. Furthermore, the use of pesticides in agriculture and home gardens is directly influenced by the need for food and for enhanced urban and suburban landscapes. The varroa mite, Varroa destructor, a serious contributor to honey bee colony losses each year, is endemic to Korea, Japan, and Thailand and its introduction and spread into Europe and North America may very well have resulted from humans moving honey bee queens and colonies around. It has also been hypothesised that the intercontinental movement of bumble bee queens during the early stages of bumble bee commercialisation could have introduced new non-native parasites and diseases to the United States.

These new diseases could spill into wild bumble bee populations when commercially reared bumble bees escape and come in contact with wild bumble bees. Commercial bumble bees harbour higher numbers of various pathogens relative to wild bumble bees and are moved throughout the country, which may facilitate widescale disease spread. Finally, there is concern that climate change will disrupt the synchrony between pollinator and plant emergence, limiting interactions between plants and their pollinators with potential negative effects on pollinator health and plant reproduction. Human actions impact many of the factors responsible for bee decline. 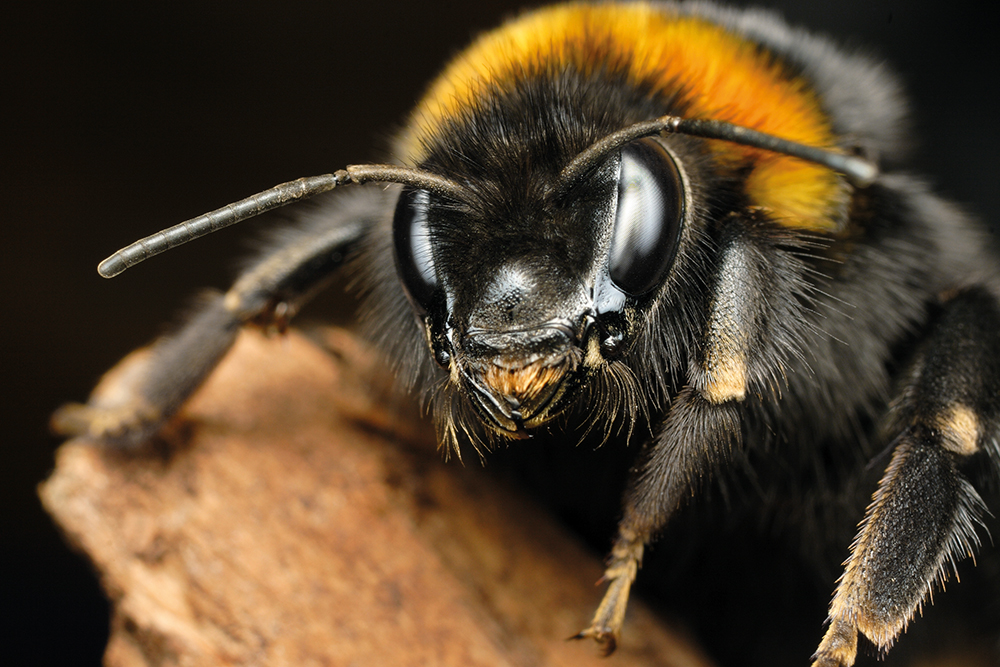 A decline of pollinators can seriously impact the food supply. Fruit production would be strongly affected as most fruits require insects for pollination. Propagation of many vegetables would become problematic.

However, a lack of pollinators would not lead to a complete penury of food. This is because not all plants require pollinators for seed production. For many plant species, the wind, and not bees or other pollinators, carry pollen from one plant to the next, ensuring seed production. Grasses, which include wheat and barley and the majority of grains, are wind-pollinated. Corn pollen is also carried by wind. In addition, some of the vegetables we consume have been bred to self-fertilise, where pollination occurs within the same flower in the absence of pollinators. Therefore, wind-pollination and self-fertilisation will help maintain some plants and crops in the absence of pollinators.

The dependence of humans on plants goes far beyond food production. Plants provide building material and are the original source of most pharmaceuticals. Most importantly, humans rely on healthy plants to provide oxygen. Humans breathe in oxygen and exhale carbon dioxide. Plants capture carbon dioxide from the atmosphere to produce oxygen. Without plants, the air would become filled with carbon dioxide and devoid of oxygen which would lead to the demise of animals, including humans.

A loss of pollinators would not lead to the complete disappearance of plants on earth, as various plants are wind-pollinated and other plants rely entirely on self-pollination for seed production. However, it would shift the composition of plant communities with serious implications for the animals that feed on them or use them for shelter. These changes would have many ramifications, many of which are difficult to predict. Humans depend on plants and plants depend on pollinators. A balance must be maintained in order to sustain life on earth and protect human survival and health.