Professor Darryn W. Waugh – The Polar Vortex: Meshing and Stripping the Gears of the Atmosphere

May 23, 2017Astronomy and Planetary Science, Earth and Environment, Physical Science

Earth’s atmosphere is composed of multiple interlocked rotating parcels of air. At the poles, rotating vortices form an important part of this system. Climate scientist Professor Darryn Waugh of Johns Hopkins University investigates how polar vortices interact with the rest of the atmosphere, and the ways in which they can impact our weather.

Until recently, most people had never heard of polar vortices. It was only during the extremely cold winter of 2014 that the term became popular in the United States media. Now when you hear it mentioned in the news, the polar vortex is often shorthand for ‘bad winter weather’, which is quite misleading. One researcher seeking to better understand polar vortices and to reduce misconceptions surrounding them is Professor Darryn Waugh, of Johns Hopkins University in Maryland.

The term polar vortex is commonly used to describe the circumpolar vortices that cause severe or unusual weather at high latitudes. However, circumpolar vortices can have many different characteristics and influences on the weather. Also, far from being unusual or rare, they are actually a fairly common feature of the Earth’s atmosphere, and occur on other planets. When extreme cold events occur, this is not because of the existence of a polar vortex (which was always there) but rather because the edge of the vortex has shifted or a piece has been stripped off and moved south.

Polar vortices occur in two layers of the atmosphere: the troposphere (the lowest layer, up to 5 miles high at the poles) and the stratosphere (up to 30 miles high). In both cases, they refer to the flow of air from west to east, circling the pole. These two types of polar vortex occur separately from one another, and occupy different latitudes as well as height ranges. 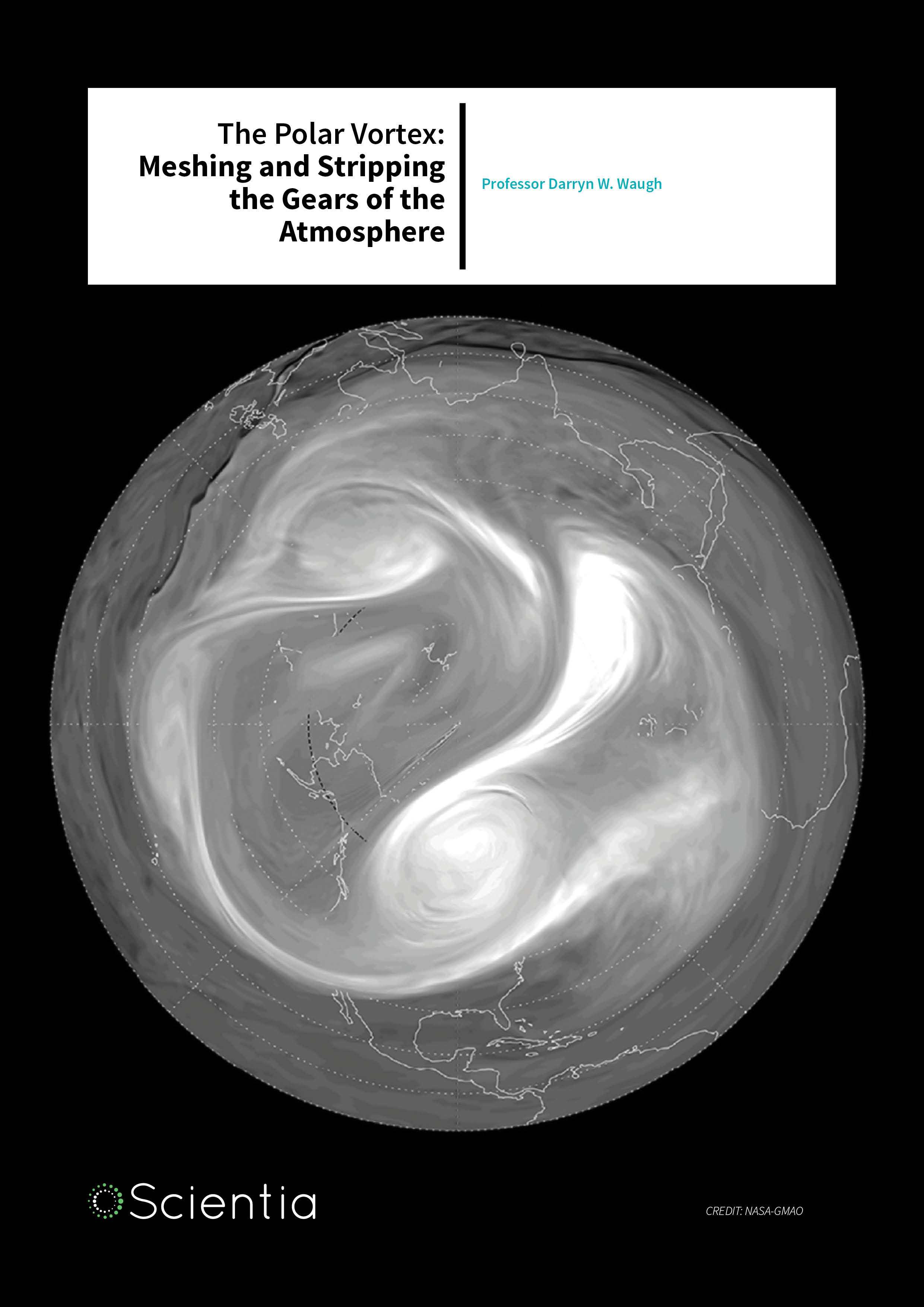 So what causes them, and what keeps them going once they have started? Polar vortices form when a strong temperature gradient forms between low and high latitudes. This happens particularly in winter when the pole gets much less sunlight than areas closer to the equator. The temperature gradient and the Coriolis Force, caused by the Earth’s rotation, produces the prevailing ‘westerlies’ in the mid-latitudes, which are stronger in winter because of the stronger temperature gradients. At the North Pole, greater variability in land and sea surface temperatures and elevations result in more waves propagating into the stratosphere, and a weaker and less stable stratospheric polar vortex than at the South Pole.

In characterising polar vortices, the concept of ‘vorticity’ is important. This is a measure of the rate of rotation of air parcels. Another important term is stratification, which occurs when layers of stable air form, mixing less than in unstratified air. Both of these terms are used in the determination of Potential Vorticity – a similar concept to angular momentum which can be used to describe how a polar vortex behaves. A polar vortex is usually defined as a region of high Potential Vorticity (PV), where the air is rotating as a parcel and is relatively highly stratified.

Professor Waugh and his colleagues examined the ‘surf zone’ at the edge of stratospheric polar vortices, where a steep gradient exists in the PV and acts as a barrier to mixing. Using a simulation that considers the atmosphere to be a shallow layer of fluid on the surface of a sphere, they were able to describe the dynamics of this system. This enabled them to investigate the effects of surface elevation (mountain chains and highaltitude zones such as Tibet), solar radiation and the Earth’s rotation on polar vortices. 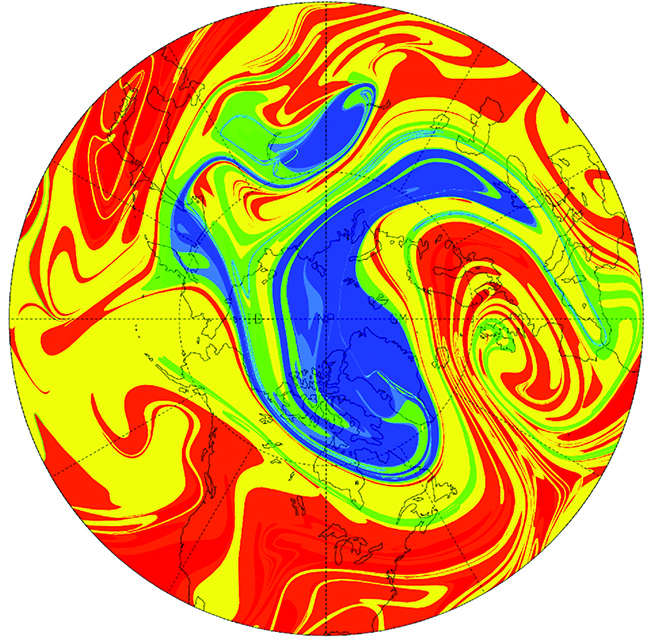 In particular, Professor Waugh’s simulations allowed him to examine the characteristics of Rossby waves – north-south meanders in the polar vortex caused by variations in topography, oceanic heating and other factors. When these Rossby waves ‘break’, they can result in vortex stripping, where a long filament of air separates from the main body of the vortex, moves south and mixes with the warmer air.

The team showed a strong agreement between their observations and simulations of vortex stripping, and published their findings in the Journal of Geophysical Research in 1994. In this work, the simulations were matched with NASA highaltitude observation flights, where stripped vortex filaments were found. These filaments were detected using equipment that measured temperature variations and the concentrations of multiple chemical ‘tracers’ occurring naturally in the atmosphere. These tracer compounds are present in different concentrations inside and outside polar vortex air, and provide a signature of vortex filaments.

Polar Vortices and the Climate

The stratospheric polar vortex exerts an important influence on the Earth’s climate. One of the most obvious effects is ozone depletion. This is caused by chemical destruction by chlorine and bromine from CFCs and other manmade compounds. Polar ozone depletion is linked to chemical reactions taking place within polar stratospheric clouds, which occur in the stratosphere when the temperature drops below a threshold value. This effect is particularly strong in the southern hemisphere, where the polar vortex is colder and more stable than northern counterpart. The lower temperatures lead to more chemical destruction while a stable polar vortex means that ozone-depleted air is not dispersed into middle latitudes. ‘The formation of the ozone hole leads to an even colder, stronger polar vortex,’ Professor Waugh explains. This happens because ozone absorbs ultraviolet radiation and warms the stratosphere, so less ozone means lower temperatures, strengthening the vortex and further driving the creation of polar stratospheric clouds.

As modelling of climate change predicts warming in the lower atmosphere but cooling in the stratosphere, there is a further risk of more polar stratospheric clouds forming and a resulting increase in ozone depletion – just as our reduced use of ozonedepleting chemicals seems to be recovering stratospheric ozone levels.

In the north, one of the most noticeable features of the Arctic weather is the sudden warming or cooling that can take place. These sudden changes in temperature are strongly related to the Arctic polar vortex structure. Recent work by the team has identified links between upper-atmosphere polar vortices and lower-atmosphere activity such as this sudden warming and cooling, and also to atmospheric activity further from the poles.

These links have a range of time scales, from weeks to years, and the processes behind them are still relatively unknown. Professor Waugh is continuing to work on a number of problems relating to stratospheretroposphere coupling, including the effects of polar vortices on surface weather and ocean circulation. His team is also continuing to make progress on understanding the behaviour and movement of polar vortices, and the complex relationships that exist between vortices and stratospheric ozone.

This research into large-scale atmospheric dynamics provides an important connection between greenhouse gas warming of the Earth’s atmosphere and the effects of this warming on the weather at a specific place and time. While climate scientists are always cautious in stating that climate change is the cause behind any one extreme weather event, research like Professor Waugh’s is giving us a clearer idea of what weather events are driven by human-induced climate change.

Polar vortices also form in other planetary atmospheres, through similar processes as those on Earth. Professor Waugh and his colleagues have studied their formation in the winter hemisphere of Mars, where instead of an increase in the potential vorticity (PV) towards the pole as is seen on Earth, the maximum PV values are seen in a ring around the pole. In 2016, the team published an article in the Journal of Geophysical Research detailing similarities between the Martian polar vortex and the Earth’s tropospheric polar vortex, which forms an approximate annulus shape. 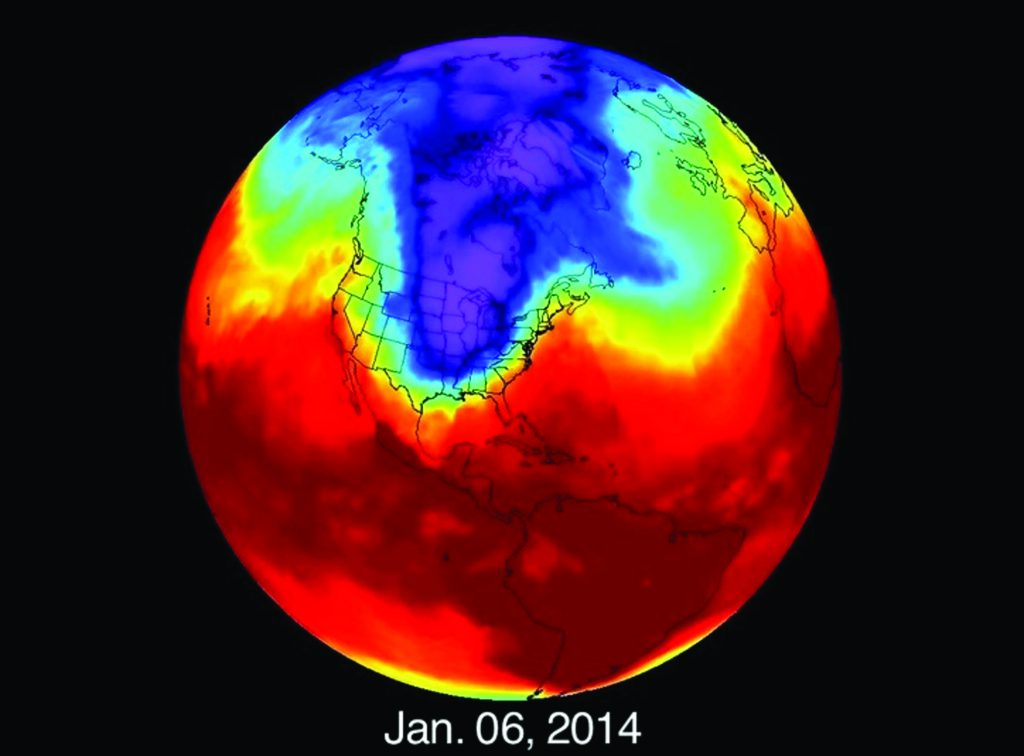 Professor Waugh and his team set out to thoroughly investigate the reasons behind this differently-shaped polar vortex on Mars. Using a simulation of the Martian atmosphere, they showed a connection with the existence of the Martian CO2 polar icecaps. These icecaps form when the temperature drops sufficiently for carbon dioxide to condense out of the air and form a solid. When a substance freezes, it releases what’s known as the latent energy of condensation. This energy is given out because the molecules have transformed into a more stable configuration, thus releasing much of their kinetic energy. In the case of Mars’ atmosphere, where approximately one-quarter of the atmosphere freezes out during the winter, this is sufficient to weaken the potential vorticity directly over the pole, resulting in maximum PV values in an annulus surrounding the pole but not directly over it.

Even with the presence of a CO2 polar icecap to explain the formation of an annular polar vortex, this feature should not persist due to natural instabilities. However, Professor Waugh’s team has shown that a combination of the relatively flat topography and the rapidly-cooling Martian atmosphere explains the relative stability of the Martian polar vortex. This work is to be published in the Journal of Atmospheric Science in 2017.

Looking Deeper into the Vortex

The team’s future plans include investigating the effects of polar vortices on the Earth’s weather systems and on extreme weather events. He also intends to investigate Martian polar vortices and the ways in which trace atmospheric components such as dust and water vapour are transported into and out of that planet’s distinctive polar vortex system.

They also plan to look at polar vortices on Titan, one of Saturn’s moons. ‘There are polar vortices in Titan’s stratosphere, and there are questions – similar to those for Earth and Mars – regarding the structure and seasonal evolution of these vortices and their impact on trace gases,’ Professor Waugh explains. The formation, structure and behaviour of Titan’s vortices under conditions very different to those on Earth may reveal new insights into fundamental vortex processes. 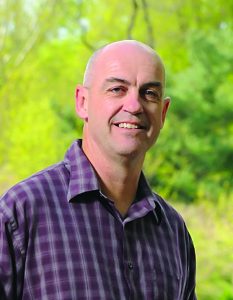 After obtaining a BSc in Mathematics at the University of Waikato in New Zealand in 1986, Professor Darryn Waugh went on to receive his MSc at Waikato in Mathematics in 1988. He was then awarded his PhD at the University of Cambridge in the UK in 1992, after which he pursued postdoctoral work at MIT in the USA and Monash University in Australia. Since 1998, he has worked at Johns Hopkins University, where he became Professor at the Department of Earth and Planetary Sciences in 2004. Professor Waugh has received three Group Achievement Awards from NASA for projects he has been involved in. He also received the Francois N Frenkiel award for Fluid Mechanics for a 1993 paper and the Stanley Jackson Award from the South African Society of Atmospheric Sciences in 2012.