Professor David Jewitt and his team at UCLA explore the nature of comets. These fleeting visitors to our cosmic shore are important sources of information, and can help to reveal the origin and evolution of the solar system. Most recently, Professor Jewitt’s team have explained the unusual activity of some of the most distant comets in the solar system.

Comets play a vivid historical role in the human psyche, often being interpreted as portents of impending doom. In the era of modern science, we realise that comets are simply icy leftovers, frozen in time since the solar system’s formation about 4.6 billion years ago.

Far from bringing us doom and disaster, comets offer scientists unparalleled opportunities to learn about the earliest periods of the solar system’s evolution. At the same time, they are some of the most challenging objects to study and remain some of the least well understood.

What Are Comets and Where Do They Originate?

Comets are composed of a central core or ‘nucleus’ of rock, dust, water ice and various frozen gases such as carbon monoxide, carbon dioxide and assorted hydrocarbons, which coalesced together at ultra-low temperatures in the outer parts of the protoplanetary disk. The distinctive tails that we are all familiar with are an optical distraction, produced when ice in the nucleus is heated by the Sun, releasing gas (outgassing) and ejecting dust into a distended, expanding cloud called the coma.

Comets come from two very different sources within the solar system – one providing short-period objects (with orbital periods of less than 200 years), and the other supplying long-period objects (greater than 200 years). The nearest store of cometary precursors, containing billions of nuclei larger than a kilometre across, is called the Kuiper Belt. This is a fat disk of objects encircling the Sun with an inner edge at Neptune’s orbit – approximately 7.5 billion kilometres from the Sun, or 30 AU – and reaching out to at least several thousand AU. Pluto resides in this region and is now recognised as large Kuiper Belt object.

The Kuiper belt was discovered by Professor David Jewitt and his former student Jane Luu in 1992. ‘The year 1992 marked the beginning of an intense period in which almost everything we did produced a discovery, starting with the mapping of Kuiper Belt structure,’ he recalls. ‘We found that the belt is thick, more like a doughnut than a sheet of paper, providing evidence of an unexpectedly violent past.’

‘Specifically, I am interested in comets that show activity where water ice does not sublimate because it is too cold.’ 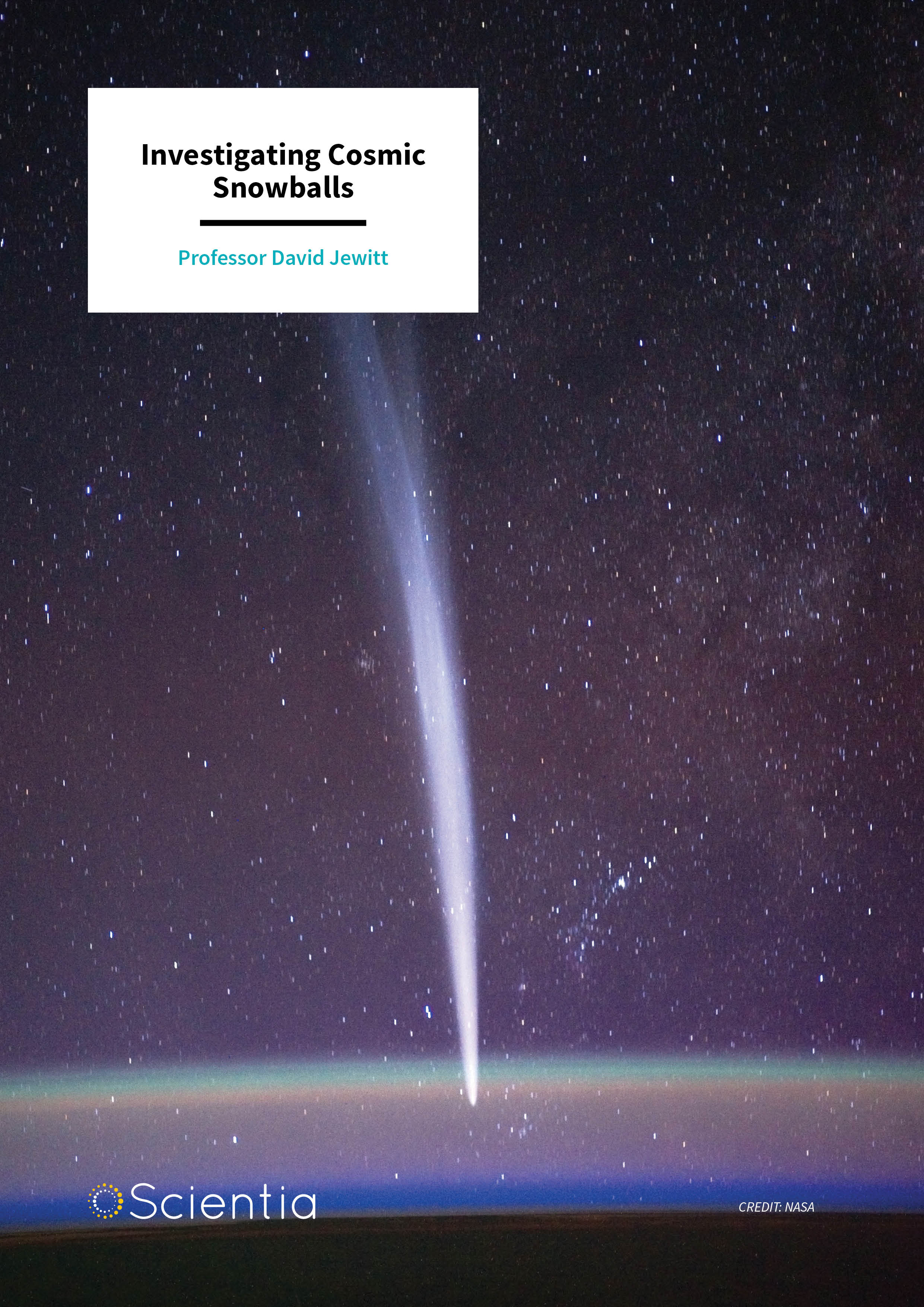 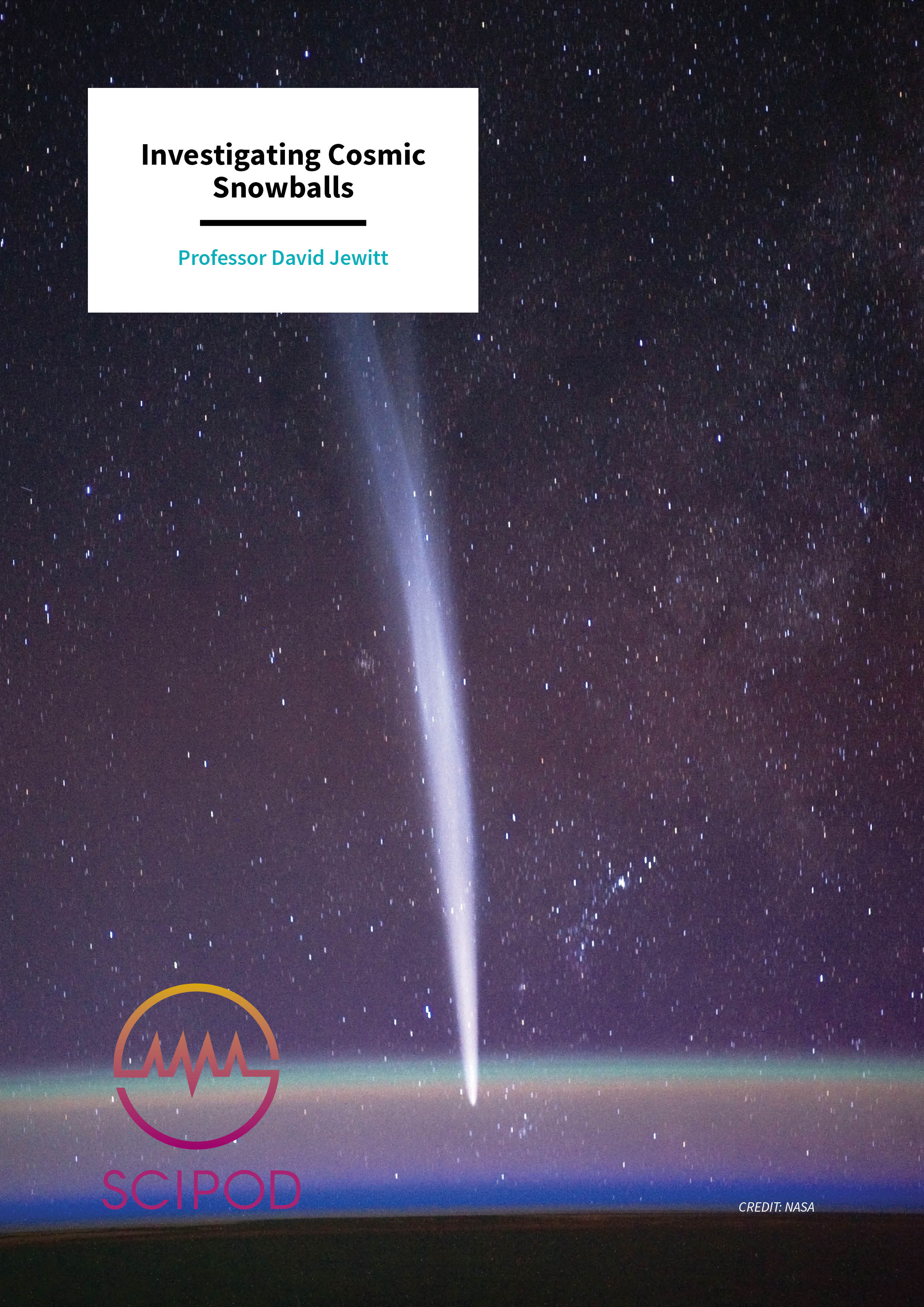 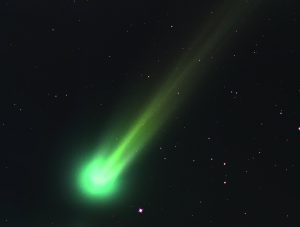 Centaurs and the Kuiper Belt

Since then, Professor Jewitt’s research has helped to illuminate numerous mysteries relating to cometary bodies and their behaviour. He investigates comet-like objects called Centaurs, and probes their unexpected behaviour when they are far from the Sun. Centaurs are recent escapees from the Kuiper Belt, on their way either to near-Sun destruction or to an icy death, when ejected from the solar system by the gravity of the gas giants – Jupiter, Saturn, Uranus and Neptune.

The mechanism driving outgassing from comets is called sublimation, in which ice transforms directly into a gas, bypassing the liquid phase. Dust particles trapped in the ice are dragged out by the rush of gas and then swept away by the pressure of sunlight, giving rise to the characteristic tail. Sublimation of water ice begins at the orbit of Jupiter (at 5 AU) and grows stronger the smaller the distance to the Sun.

Centaurs orbit beyond Jupiter and so they are too cold for the dominant water ice to sublimate. Surprisingly, however, even in these distant objects, cometary activity is sometimes observed, with far-away Centaurs ejecting material in the form of a tail and coma. Professor Jewitt suggests that various other processes are at play that may cause trapped gases to be released. Ices that are more volatile than water ice may play a role. It is also likely that crystallisation, in which water molecules suddenly snap into an ordered arrangement after previously existing as a disordered jumble, allows Centaurs to show activity even as far out as Saturn (10 AU).

While the Kuiper Belt is the main source of short-period comets, the long-period comets come from a completely different region called the Oort Cloud. First proposed by the Dutch astronomer Jan Oort, this is a diaphanous spherical region of vast extent surrounding the Sun. The Oort cloud extends to 50,000 AU (7.5 trillion km – almost a lightyear) or more, with an outer edge carved by the eroding effects of passing stars.

The Oort cloud is so large that, even with a trillion constituent members, no two comets ever collide. Also, these comets could not have formed there, because the density of matter in the Oort cloud is far too low. Instead, the Oort cloud comets coalesced in the vicinity of the growing giant planets and were ejected by them too fast to be captured in the Kuiper belt, but too slow to completely escape the gravity of the Sun. Simulations suggest that for every comet in the Oort cloud, another 90 to 99 were ejected to the interstellar medium, never to return.

The orbits of Oort cloud comets are disturbed by galactic tidal forces and gravitational effects from nearby stars, some of which occasionally pass through the cloud. This causes them to move inwards towards the inner solar system where Earth and the other rocky planets reside. These inward-scattered objects are the long-period comets such as C/2011 W3 (Lovejoy, see cover picture). 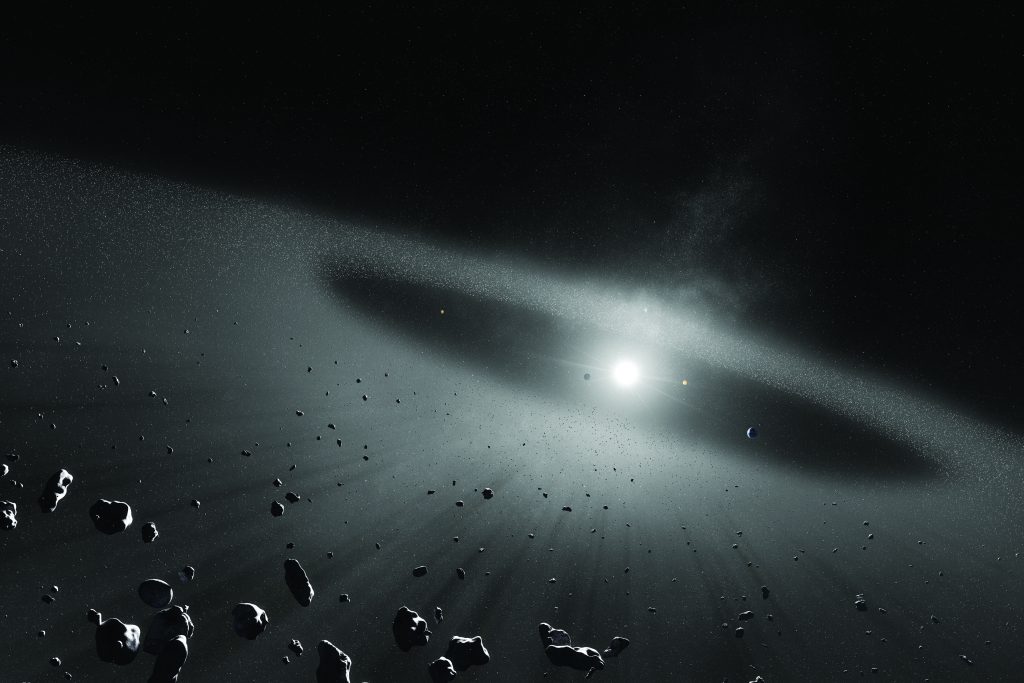 Cold Comets: How Do They Work?

As Professor Jewitt has observed, cometary tails are seen in distant regions of the solar system that are far too distant and cold for the sublimation of water ice to occur. So, what exactly is happening? What internal processes are being kick-started to induce sublimation-like behaviour, giving these far-away comets their characteristic tail and coma?

As previously mentioned, one mechanism that might explain this behaviour is crystallisation. Solid materials can exist in two forms – crystalline and amorphous. Window glass, for example, is amorphous, meaning that the molecules of silicon dioxide in the glass are jumbled together in no particular order.

At the high temperatures found on Earth, water ice exists only in its crystalline form, in which the molecules of water are packed together in orderly, hexagonal crystals. This means that the ice in your home freezer and ice on the roads on a cold winter’s day is always crystalline. But at the low temperatures found in space, ice tends to grow in an amorphous form.

However, amorphous ice is unstable, meaning that it will spontaneously crystallise once the temperature rises above a critical value. When this happens, energy is released and gas molecules that were trapped in the amorphous ice are rapidly expelled. The result is, in effect, a mini-explosion. Since Centaurs are merely inward-drifting Kuiper belt objects, Professor Jewitt concludes that the Kuiper Belt must also be rich in amorphous ice. This is important, because it would set severe constraints on the thermal evolution of Kuiper belt objects. Even if warmed to only −190°C, ice in the Kuiper belt would have long-since crystallised. 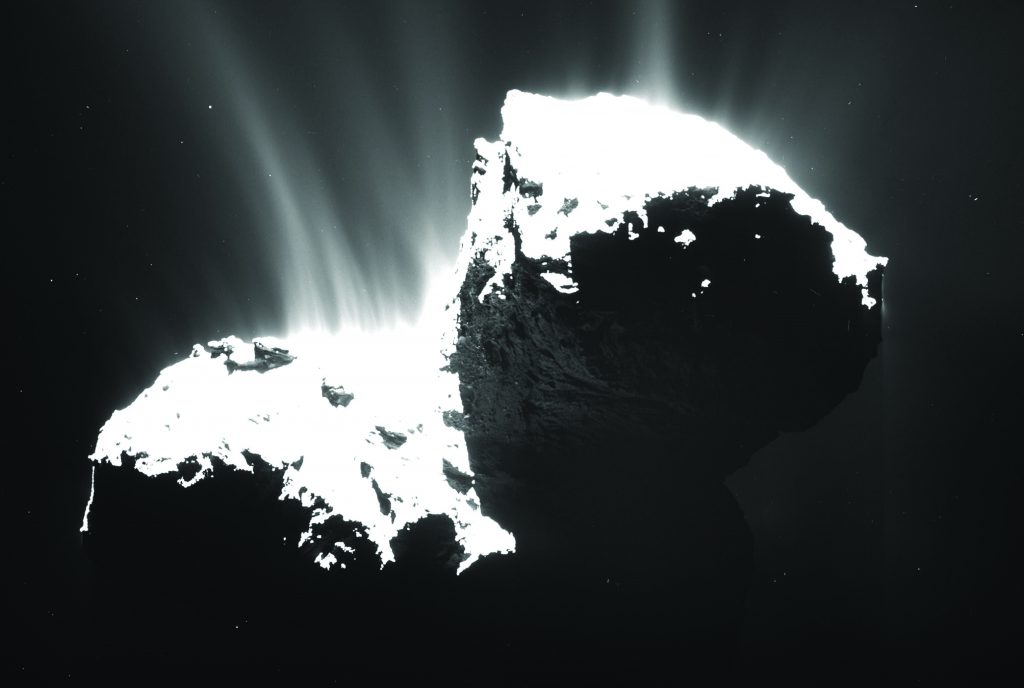 Recently, Professor Jewitt and his colleagues examined a comet that is so far from the Sun, and so cold (−213°C), that even crystallisation is impossible. The long-period comet, C/2017 K2 (Pan-STARRS), is currently about 2.4 billion kilometres from Earth, and was active even when well beyond the orbit of Uranus (at 20 AU). No other inbound comet has been seen to be outgassing at such large distances.

Since crystallisation is impossible so far out, another process must drive the activity. Sublimating ‘supervolatile’ ices, such as carbon monoxide, carbon dioxide and nitrogen, provide a potential explanation. Professor Jewitt found that an exposed ice patch on the comet of 10 square kilometres would produce the outgassing that his team observed. Such a patch would occupy only about 1% of the surface of the nucleus, thought to be about 9 kilometres in radius. The survival of supervolatile ice is only possible because of the comet’s vast distance from the Sun. Although now extremely faint, comet C/2017 K2 (Pan-STARRS) will make its closest approach to the Sun in 2022, and could then be a spectacular object.

An even more extreme object with the ungainly name 1I/2017 U1/‘Oumuamua passed Earth in late 2017. It holds the distinction of being the first interstellar object ever detected passing through the solar system, and likely originated as a comet ejected from the protoplanetary disk of another star. Professor Jewitt calculated that the solar system contains, at any instant, 10,000 similar interstellar objects. He also estimated that, in the Milky Way galaxy, there are between 10 and 100 trillion trillion such bodies, all of which have escaped detection until now because of their faintness.

Curiously, although this object has spent billions of years drifting between the stars with a temperature only 10 degrees above absolute zero, Professor Jewitt and collaborators observed neither a coma nor a tail. The reasons for this remain a mystery for future study. 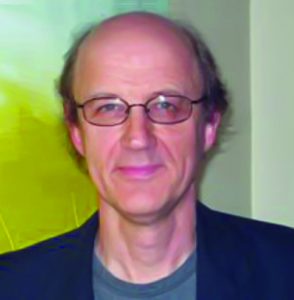 Born in England, David Jewitt was an undergraduate at University College London before moving to the California Institute of Technology (Caltech) in Los Angeles, where he received his PhD in 1983. He was an Assistant Professor at the Massachusetts Institute of Technology (MIT), before moving to the University of Hawaii, where he first took a position as Associate Professor, before being promoted to full Professor. He finally moved back to Los Angeles in 2009, where he began his current position as Distinguished Professor of Astronomy at the University of California, Los Angeles. He has been awarded The Shaw Prize for Astronomy and The Kavli Prize for Astrophysics, and is a fellow of various institutions, including University College London, the American Academy of Arts and Sciences and the National Academy of Sciences. Professor Jewitt’s particular research interests include solar system formation, the Trans-Neptunian solar system, physical properties of comets, Centaurs, irregular satellites, Trojans, Active Asteroids and the sub-millimeter properties of comets & young stars.