Professor Eli Glatstein and his colleagues at the University of Pennsylvania have applied photodynamic therapy for the treatment of a variety of types of cancer. Here, we illustrate the rationale behind this technique and discuss malignant pleural mesothelioma, a type of cancer where encouraging results have been shown, and highlight some of the key results achieved by this research group in their groundbreaking work. 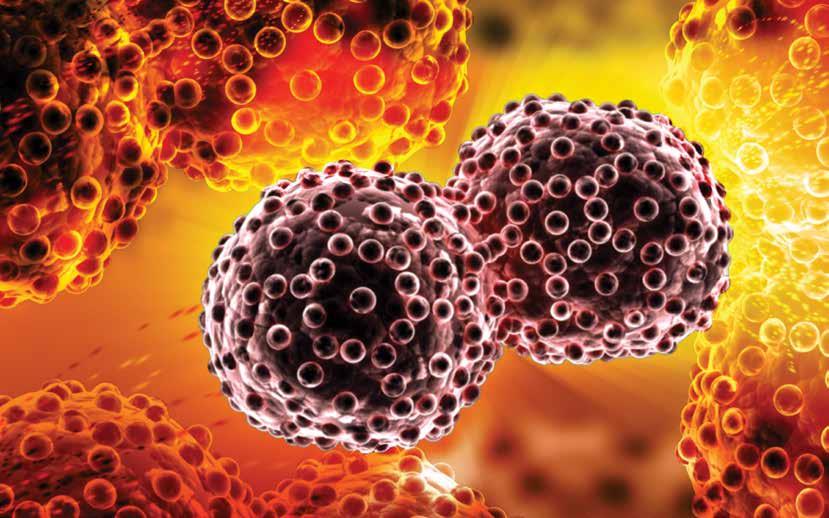 Photodynamic therapy – what is it and how does it work?

Photodynamic therapy is a method to kill cancer cells selectively using light at a specific wavelength, in a way that reduces damage to other tissues. This binary therapy combines the use of a photosensitising drug and a source of non-ionising radiation (in this case, visible light!) to kill cancer cells at the site of a solid tumour. The patient is administered a photosensitising drug, which can accumulate in tumour cells, while having little impact on healthy cells elsewhere in the body. This is in contrast with traditional chemotherapeutics, which can produce toxic effects throughout the body due to their inherent toxic properties. Once the tumour has been loaded with photosensitiser, it is then irradiated with light of a specific wavelength (consistent with the characteristics of the sensitizing agent) that causes the photosensitiser in the cells of the tumour to initiate the formation of reactive singlet oxygen (which is denoted as 1O2). This process results in the death of the exposed tumour cells. The photosensitiser causes the formation of reactive singlet oxygen only in the presence of a specific wavelength of light, meaning that the technique is highly targeted to cancerous tissues that both absorb the photosensitiser and are exposed to the light.

Photodynamic therapy causes the death of tumour cells in a variety of ways. These include initiation of apoptosis, which is a complex biochemical cell death program, and necrosis, which is a traumatic form of cell death caused by direct damage to cellular components. Other anti-tumour mechanisms involve damage to tumour vasculature, which impairs the tumour blood supply. Photodynamic therapy can also produce a local inflammatory reaction, which can result in an immune response directed against the tumour. Importantly, however, none of these mechanisms directly target DNA in the tumour cells. This is in contrast with conventional ionising external beam radiotherapy and conventional chemotherapeutics, which cause tumour cell death by initiating breaks in DNA. While the disruption of DNA is effective in killing cancer cells, it can also cause secondary cancers in off-target tissues by facilitating mutations in DNA, which adversely affect cell proliferation and mortality. Other advantages of photodynamic therapy include the ability to use it in chemoresistant or radioresistant cancer. These forms of cancer are resistant to the effects of conventional chemotherapeutic drugs or conventional ionising external beam radiotherapy. However, the mechanisms underlying chemoresistance or radioresistance tend not to interfere in the destructive potential of photodynamic therapy in solid tumours and so the approach can be used in these types of cancer. Photodynamic therapy does not elicit treatment resistance in exposed cells and can be used repeatedly on the same tumour site, without any change in the effectiveness of the therapy. Finally, photodynamic therapy does not typically interfere with other treatment modalities such as chemotherapy or radiotherapy, in terms of changing their effectiveness or compounding their side effects, and so it is highly amenable to use in combination treatment approaches.

Frequently, this takes the form of surgical removal of a tumour with accompanying photodynamic therapy to target other small metastatic tumours or ‘nodules’ that might be present. The light required to activate commonly used photosensitisers cannot typically travel more than 5-10 mm into the exposed tissue. Consequently, photodynamic therapy is best suited for the treatment of superficially accessible cancers, such as skin cancer, or those accessible on the linings of organs or body cavities, such as the thoracic or abdominal cavities, as part of surgical interventions to remove cancers from these areas.

Malignant pleural mesothelioma is a rare cancer of the pleura, the membrane that lines the outside of the lungs. It is often caused by exposure to asbestos. Survival rates are very poor, and patients typically exhibit a median survival of about 12 months. Treatments include chemotherapy, radiotherapy and surgical resection. In particular, in patients for which surgery is an option, surgical removal of cancerous tissue can sometimes improve survival. However, this can involve removal of the entire lung, which has obvious implications for lung function and quality of life, but is considered to be the most effective method to ensure removal of as much of the cancerous tissue as possible. A surgical procedure called radical pleurectomy aims to remove as much of the cancerous pleura as possible while sparing the lung, but complete removal of the cancerous tissue is more difficult with this technique compared with removal of the entire lung. Both surgical approaches have attached benefits and risks. However, in many patients a process called punctate miliary seeding occurs, where the cancer spreads extensively as a series of small nodules over the surfaces of the thoracic cavity. Professor Glatstein explains the challenge that this poses to a surgeon: ‘This condition is what medical students often refer to as the “peek and shriek” operation – surgeons open the chest or abdominal cavity, take one look at what they see and immediately close the patient up because there’s no surgical procedure that can remove all these tiny tumour nodules that may number in the hundreds or even thousands. There is no known cure for “seeding” of the peritoneal or pleural surfaces.’ 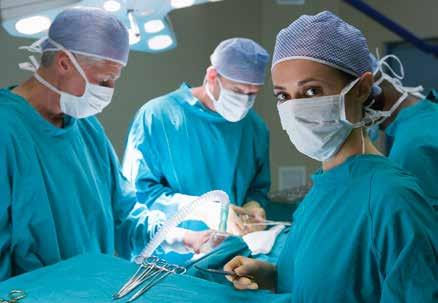 ‘We have some patients with malignant pleural mesothelioma and lung cancer presenting with a malignant pleural effusion without any hematogenous metastases who have survived 5 years or longer without suffering any relapse, which for these conditions is virtually unheard of’

Repeat encounters with malignant pleural mesothelioma patients who demonstrated punctate miliary seeding got Professor Glatstein thinking about solutions to this inoperable condition. Then a talk he attended about photodynamic therapy for skin cancer gave him the idea that photodynamic therapy could be used as a potential anti-cancer technique in the thoracic or abdominal cavity. ‘I heard Tom Dougherty from Roswell Park talk about photodynamic therapy for skin cancers with photosensitisers and laser light (tuned to the wavelength of activation for the sensitiser). I realised that this potentially could solve the problem in conjunction with surgery since the laser light could be adapted to the various cavities, kill the tumour cells and (because it’s still light in the visible light spectrum) essentially spare the lung or abdominal gut tissue due to the characteristics of light and the binary nature of the photosensitiser.’ In short, Professor Glatstein recognised the value of photodynamic therapy in treating extensive areas of tumour nodules in the thoracic or abdominal cavity – something that would be virtually impossible with traditional surgical approaches. A new method to combat malignant pleural mesothelioma was born, specifically geared towards photodynamic adjuvant treatment during surgical procedures. Professor Glatstein and his collaborators, including Professor Keith Cengel who focuses on enhancing the sensitivity of cancer cells, began to apply photodynamic therapy in conjunction with surgically removing cancerous tissues in the pleura

The team has also been working to optimise the delivery system for the technique. The light is delivered to the pleural cavity using a micro lens apparatus with custom applicators. Achieving a uniform distribution of delivered light throughout the pleural cavity is very important in photodynamic therapy, to ensure that the technique is maximally effective. However, the highly variable and non-regular contours of the pleural cavity make it very difficult to assess and achieve this. The team has employed a navigation system consisting of an infrared camera, which can accurately map the contours of the pleural cavity. The navigation system both tracks the position of the laser in real time and maps the pleural cavity in detail. This combination assists the surgeon in knowing when the correct amount of light has been delivered, at the correct locations. This level of control helps to standardise treatments across patients, reduce variability in treatment outcomes and maximise the effectiveness of the treatment. 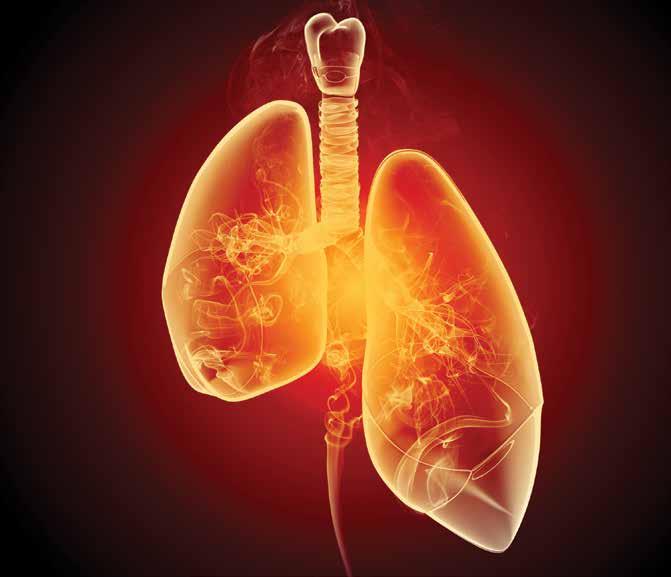 The team is highly interdisciplinary and involves physicists, biomedical scientists and physicians, who work together to develop the most effective methods to deliver photodynamic therapy. In addition to their work on applying photodynamic therapy to lung cancers they are also interested in conducting investigations into using the technique for early stage cancers of the anus and just recently completed a clinical trial of photodynamic therapy for early stage head and neck cancers. Professor Glatstein foresees a role for PDT also in bladder, prostate, breast and gastrointestinal cancers. Photodynamic therapy is set for a variety of developments, aimed to increase its effectiveness and reduce side effects. These include new photosensitising drugs, which could increase the depth of treatment penetration in tissue, reduce the length of time required to achieve a phototoxic effect and decrease the risk of any side effects. The team would also like to determine the effect of photodynamic therapy on the immune system of patients, given that there is some evidence for local immune responses in treated tumours. Combining photodynamic therapy with other treatment modalities, such as immunotherapy or gene therapy is also an area of interest for the team, to see if synergistic treatment outcomes are possible. The future is bright for photodynamic therapy. 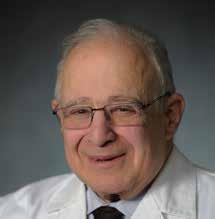 Professor Eli Glatstein achieved his medical degree at Stanford Medical School, where he first became interested in radiation oncology. After completing his postgraduate studies, he spent 2 years working at the Gray Lab in the UK under Professor J.F. Fowler, after which he served on the Stanford Faculty for 5 years and then as the Chief of the Radiation Oncology Branch at the National Cancer Institute (NCI) for 15 years. In 1996, Professor Glatstein moved to Philadelphia to become Professor of Radiation Oncology at the University of Pennsylvania, where he continues to make advances in cancer radiation therapy. 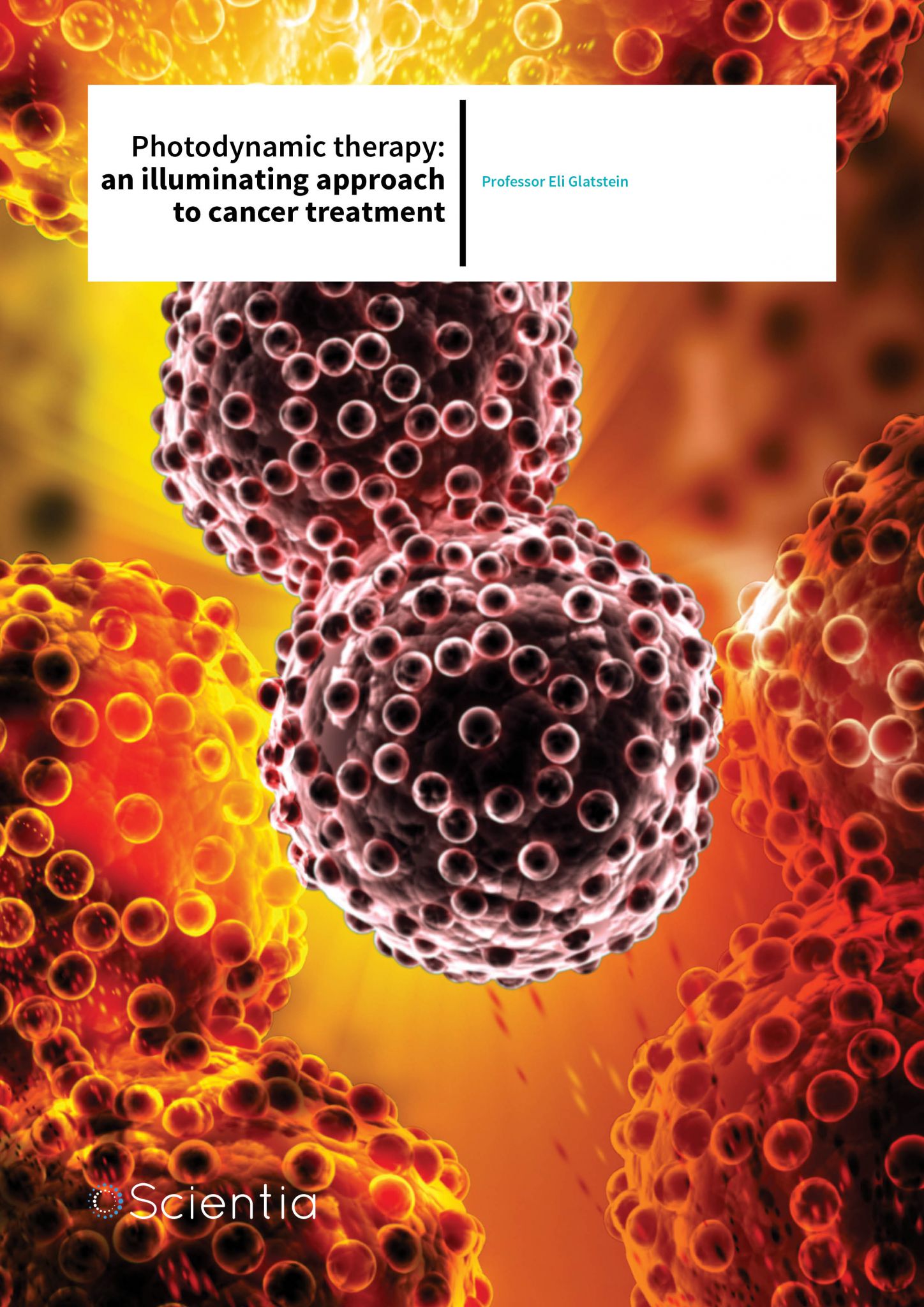