Understanding how shock waves, flow dynamics and turbulence all interact and affect the distribution of particles has applications ranging from high-speed vehicles to explosions and even ocean sediment dynamics. Professor Gustaaf Jacobs at San Diego State University develops computational and self-learning models and algorithms to study the dynamics of shocked particles within high-speed flows.

Shock waves can have both natural and human-made sources. One of the most extreme examples of a natural shock wave is that generated by a supernova explosion – the final death-throes of a massive star. This dramatic event involves enormous complexity on a range of different scales, from the cosmic scale all the way down to the microscopic. This range of scales represents one of the major obstacles in modelling complex flows. If we want to be able to predict the impact of a detonation, for example, we need to understand all the physical processes and interactions involved and be able to mathematically describe them in the model at every scale.

Modelling complex flow starts with the basic principles and mathematical theories of flow dynamics. One key aspect that needs to be fully resolved is turbulence. Studies of fluid dynamics from over a century ago recognised the complexity of a fluid moving around an obstacle and identified two zones of flow: the free flow region that remains unaffected by, and does not interact with, the obstacle; and the boundary layer on the down-flow side of the obstacle, where frictional forces between the surface of the obstacle and the fluid can significantly affect flow speed and create turbulence.

The flow separates from the surface of the object on the downstream side and thins out to mix and merge into the free flow region, forming eddies and drag. How much turbulence is created is a function of many things, including the speed of the fluid and its viscosity, as well as the shape of the object. Engineers generally look to minimise drag and reduce turbulence – creating, for example, the sleek aerofoil shape of a fast car and the dimpled surface of a golf ball.

Going with the Flow

Knowing something about the dynamics of the flow and the effects of turbulence and flow separation is one thing, but being able to visualise and study it is quite another. Wind tunnels are widely used as an experimental tool for looking at boundary layer effects and turbulence. Using smoke or fog in the tunnel can give a beautiful visual overview of the airflow dynamics, while adding oil to the surface of a model can highlight the transition between laminar and turbulent flow. 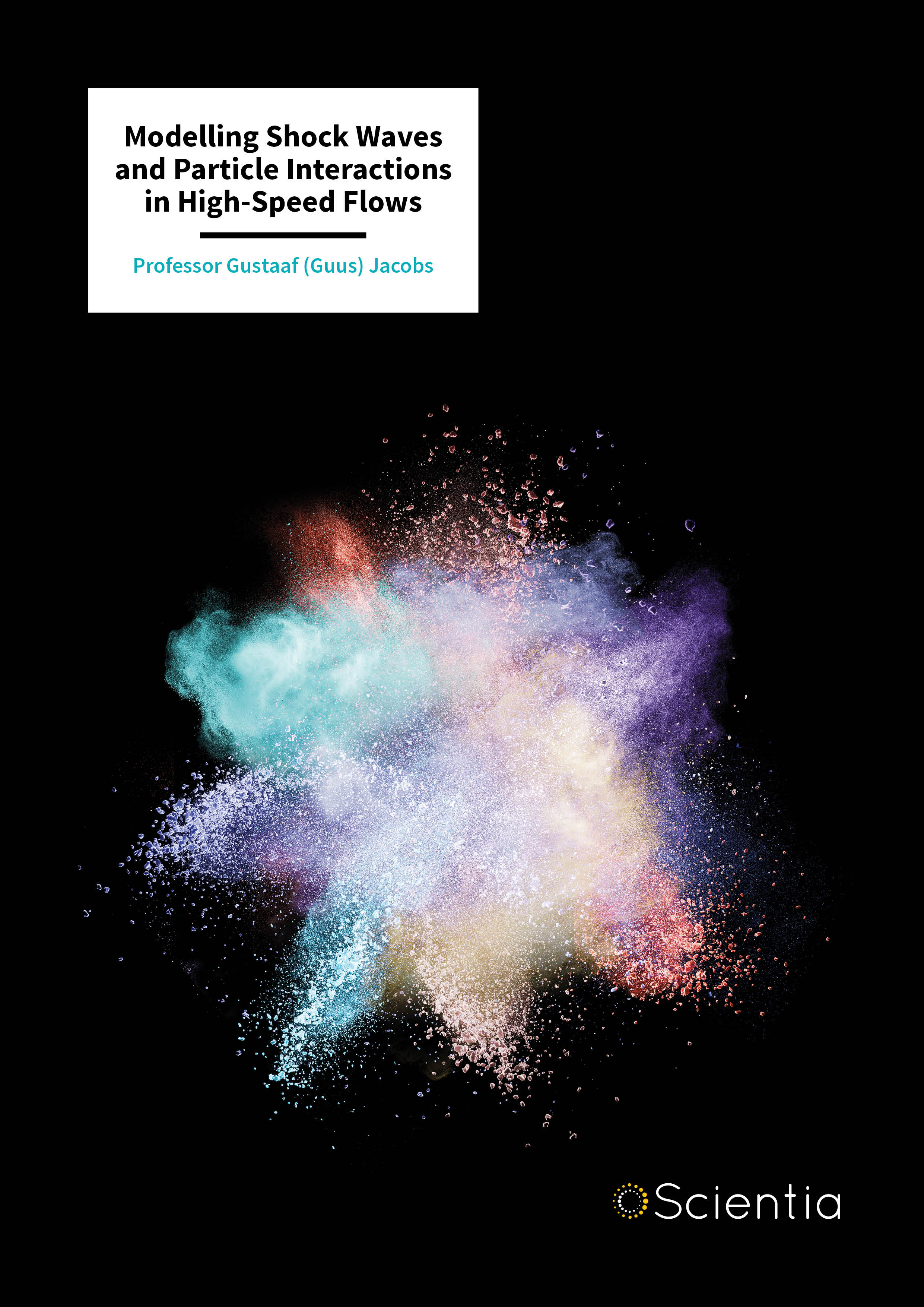 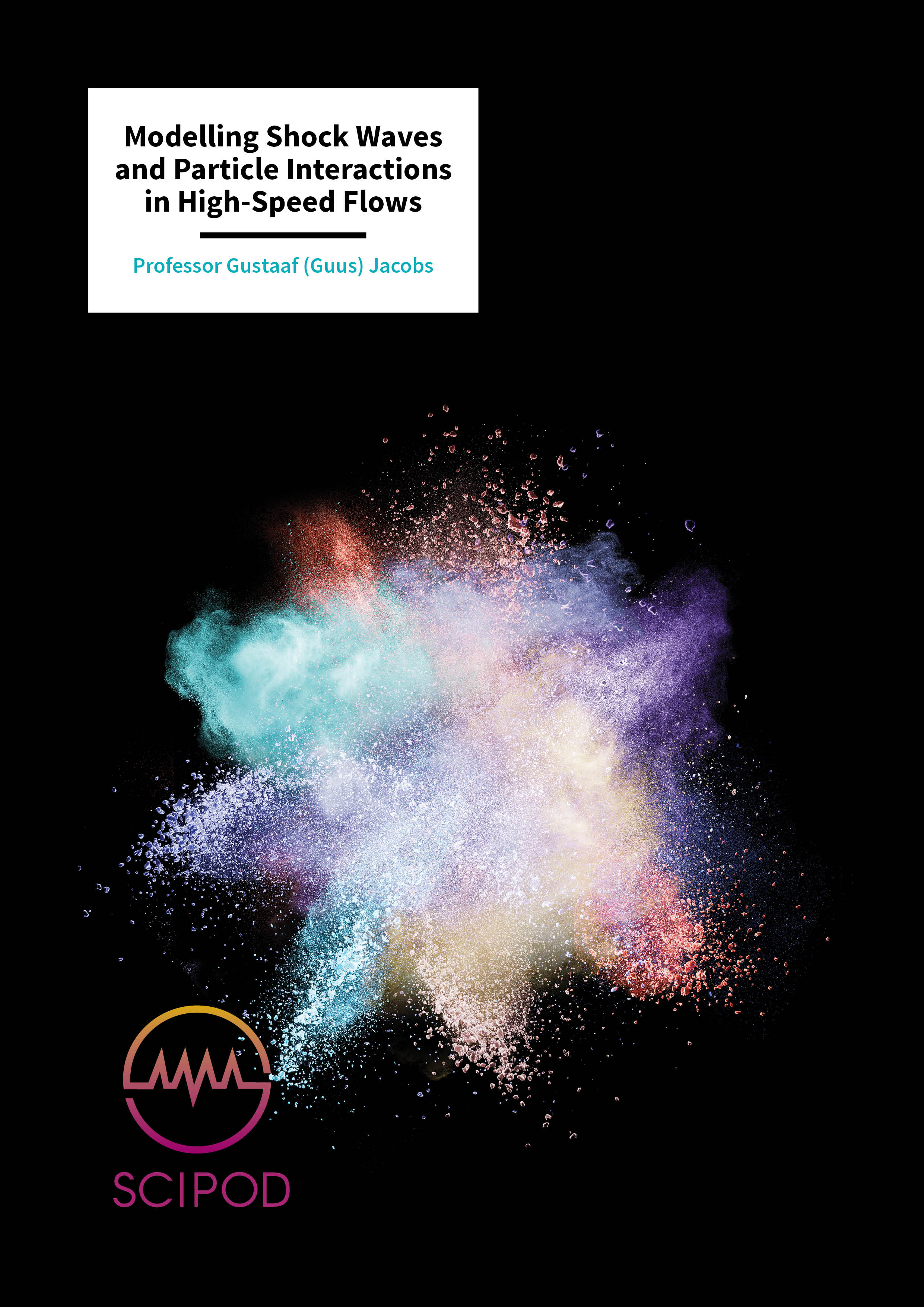 Such experimental methods provide a general overview but don’t provide the high level of detail required to generate accurate models. Similarly, the earliest model simulations relied on poor computing power, meaning that they were largely restricted to very simplified 2-D models with coarse resolution, limited flow dynamics and a small number of particles. The main focus of Professor Jacobs has been to improve these models, taking the detailed information from the small scale experimental and theoretical studies and finding accurate and feasible ways to model full-scale, high-speed complex particle-laden flows at high resolution.

There are two frames of reference when modelling flow: the Eulerian frame, which is focussed on a specific cross-section of flow passing a certain point over time, and the Lagrangian frame, which maps the flow path of each individual particle along its path through space and time. You can think of these in terms of where you as the observer are located: in the Eulerian frame, imagine yourself on the bank of a river watching the water flow by, while in the Lagrangian frame, think of yourself as a leaf floating along with the river and the individual path of that leaf.

These Eulerian-Lagrangian models are now widely used in fluid dynamics studies. The carrier fluid is modelled on a Eulerian grid, while the individual particles are points that are traced along their path using Lagrangian-based formulae, and the two are then coupled using a method called interpolation. Interpolation is used to move between different resolutions or scales in a model – it uses advanced statistical methods to generate accurate intermediate data points so that a model can smoothly transition between them.

While increased resolution is the key to making models more accurate, improving the resolution also means increasing the computational intensity – and that can get expensive. Therefore, modellers have to find ways to make their models computationally efficient. Professor Jacobs and his team have played a key role in advancing the methods needed for this.

Their approach involves grouping particles on the Lagrangian frame into clouds, which they then model as individual points (‘cloud-in-cell’). They then use generalised models and different statistical methods for processes that cannot be resolved (so-called ‘closure’ terms) and to interpolate between different scales and grids used in the same model.

Ever increasing computer power means that scientists can improve physical models and algorithms to run models within models: they can use high-resolution models to resolve the smaller scale processes and these can then be used to fine-tune a larger-scale, coarser model simulation, while still keeping computing costs down. 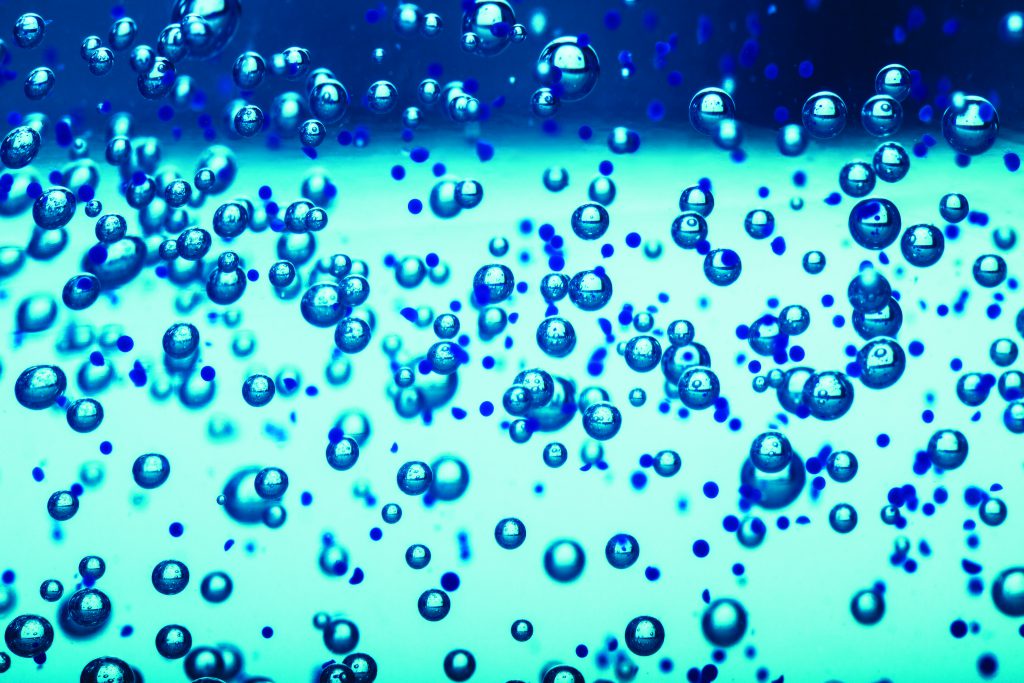 Professor Jacobs and his team have applied this work to ever more complex flows and are focussed on working out how turbulence occurs on the very small scale, and how turbulence and shock waves interact with particles within the fluid. They are generating new and more accurate models and algorithms to describe and predict this behaviour.

‘My research program has coalesced around the development of models and algorithms for the high-fidelity analysis of (mostly) high-speed turbulent flows laden with particles in environments ranging from high-speed combustors, to explosions to stratified flow near the ocean floor,’ says Professor Jacobs. ‘Through innovative modelling I aim to understand complex physics problems from a fresh point of view and make new discoveries.’

Applications of this research are wide ranging, including contaminant spread due to explosions, supersonic combustion, protective shields in hypersonic aircraft and the high-speed coating of electronic and aerospace components. Many applications are of relevance to aviation and as such, Professor Jacobs has worked closely with the United States Air Force. The range of applications also highlights the range of scales that need to be considered, from millimetres to kilometres and from milliseconds to days.

Together with Dr Vorobieff from the University of New Mexico, Professor Jacobs uses a shock tube, where shocks are generated in a controlled manner by rupturing a membrane that separates a high-pressure and a low-pressure gas. These experiments generate new data to assess Professor Jacobs’s models of shock waves through particle-laden fluids. This helps to improve the model’s small-scale physics and the overall prediction of flow.

In collaboration with Dr Udaykumar from the University of Iowa, Professor Jacobs and his team work to further improve the multi-scale algorithms and create self-learning ones based on first principle models, which can be learned at a small scale and then applied at a larger scale. This work continues to push the boundaries in terms of creating the highest resolution models, but also with the most efficient scale up, allowing the models to remain practical in terms of the computational power required.

These algorithms and models build on the group’s original work on the Eulerian-Lagrangian flow models but at higher resolution and in two-fluid flow regimes. The new macroscale models are able to capture the shock wave well without losing essential information about the interactions between the shock, the particles and turbulence within the flow.

The team’s models have provided insights into the importance of understanding the shape and density of the initial cloud in predicting the dispersal of the particles. Particles in the dense core of the cloud, for example, will experience less acceleration than those on the lower density outer limits. Numerical algorithms are used to describe these mesoscale flow dynamics and allow the model to deal with more particles, which is a better representation of a cloud containing particles that may all behave independently depending on their positions within the cloud.

To couple between these mesoscale processes and the macroscale, the team uses meta-models (models of models). Their coupling algorithm looks at the movement of the particles and the fluid and assesses the statistical uncertainty. The macroscale model checks in with the coupling algorithm to calculate the statistics needed to best represent the mesoscale physics, including the complex interactions between the shocks, turbulence and the particles themselves.

The team is also using these methods to look at the combustion and droplet physics in liquid-fuel combustors with chemically reactive fluids. Such flow adds another level of complexity, since the droplets can merge and separate, changing size and structure over time and thus, interacting with the other phases differently. 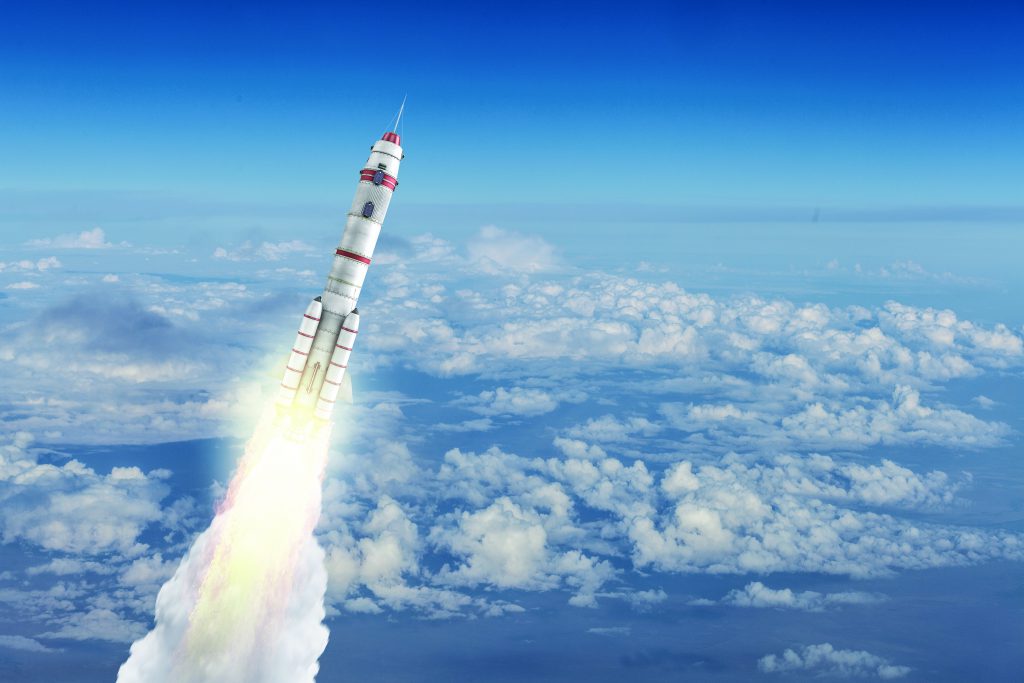 Professor Jacobs is also a passionate advocate for the mentoring and training of engineering students from high-school and above, and is the founder and director of the Center for Industrial Training and Engineering Research (CITER) within SDSU.

‘I have a deep appreciation of the contributions that quality education and mentoring have had in my professional development,’ he says. ‘I look forward to work with STEM students from underrepresented groups who are eager to make a difference and help them advance their careers.’

The aim of CITER is to equip students with the skills to thrive in industry jobs upon graduation. The centre provides them with first-hand experience of industry-driven projects and fundamental academic research. To this end, the centre has developed strong connections with many local engineering companies with whom they support internships, seminar series and online learning. 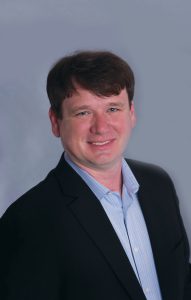 Professor Gustaaf Jacobs completed his MS in aerospace engineering at Delft University of Technology in 1998. He then went on to obtain his PhD in mechanical engineering from the University of Illinois at Chicago in 2003. After a Postdoctoral Fellowship and a Visiting Assistant Professor position at Massachusetts Institute of Technology (Mechanical Engineering) and Brown University (Applied Mathematics), Dr Jacobs moved to San Diego State University (Aerospace Engineering) in 2006. He received an Air Force Office of Scientific Research Young Investigator Award in 2009 and became an Associate Fellow of the American Institute of Aeronautics and Astronautics in 2013. In 2014, he became a professor in the Department of Aerospace Engineering at San Diego State University. His research is centred on the development of models and algorithms for the study of high resolution, high-speed, particle-laden fluids. He is also the founder and director of the Center for Industrial Training and Engineering Research (CITER), which aims to prepare students for jobs in industry upon graduation.