Over the past few decades, global climate change has emerged as the preeminent issue facing modern society. In many countries around the world, climate change is shifting weather patterns for the worse, with impacts predicted to grow increasingly more erratic and severe. Despite this, the public’s understanding of climate change is often limited and rife with misinformation. Dr Edward Maibach’s innovative program, Climate Matters, empowers local weathercasters to become beacons of public education for climate change.

To tackle global climate change, one of the primary hurdles to overcome is changing the public’s misperceptions of the risks and immediacy of the problem. Research indicates that the majority of Americans believe that climate change is happening and see it as a concern. However, when Dr Edward Maibach of the George Mason University Center for Climate Change Communication and his colleagues at Yale and Mason completed a survey in 2008, the US public ranked climate change as the tenth most important issue out of eleven. While most Americans agreed that climate change is an important issue, they typically viewed it as something that does not affect them directly, perceiving the effects of climate change as occurring far in the future or far from their homes. Unfortunately, this is not the case – climate change is currently impacting every region of the United States, mostly altering weather patterns for the worse. Without decisive intervention, the progression of climate change is poised to disrupt global agriculture, increase disease transmission, and decrease water availability in many areas, among other harms.

Dr Maibach’s 2008 survey revealed misperceptions about climate change in the American public. Beyond the belief that climate change will not affect them personally, many people were unaware of the human cause behind climate change and some of the devastating effects associated with it. Many people also, however, indicated a desire to learn more about the causes, impacts, and possible solutions for climate change.

Fortunately for everyone involved, the results of Dr Maibach’s survey came across the desk of senior TV meteorologist Joe Witte. A graph describing public trust in different information sources caught Joe’s eye – he noticed that television weathercasters were among the top trusted sources of climate change news. As Dr Maibach describes: ‘He contacted me with great enthusiasm, suggesting that if he and his colleagues were trusted as a source of information about global warming, perhaps we should develop resources to help them report on climate change – because they have great access to the public, and strong science communication skills.’

‘We currently have over 430 weathercasters participating in the project, who broadcast from 262 stations in 136 of America’s 210 media markets… Moreover, on air reporting about climate change by weathercasters increased over 1,200% in the four-year span from 2013 to 2016.’ 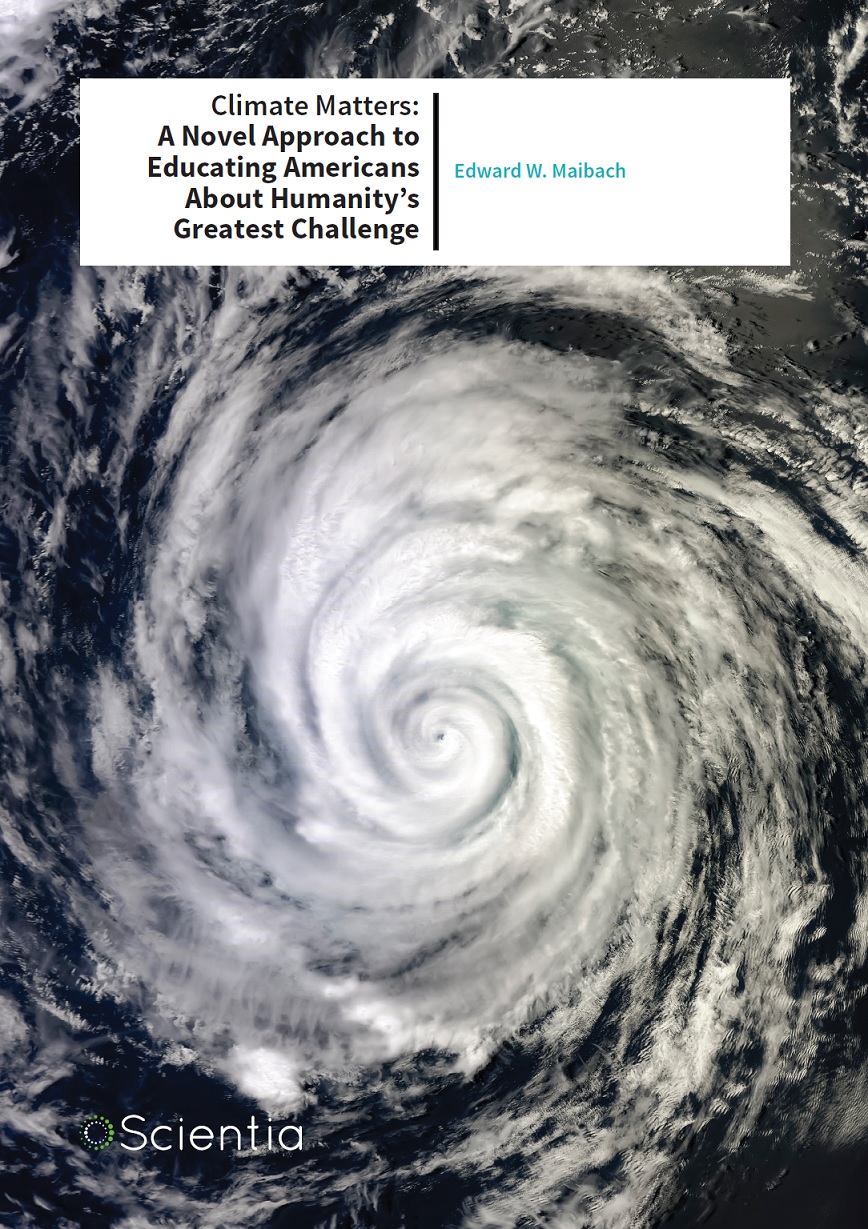 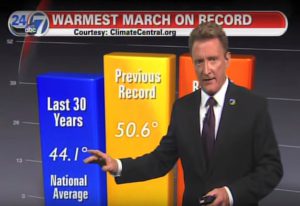 In 2009, Dr Maibach and his colleagues from Mason and Climate Central, a non-profit science communication organisation, received funding from the National Science Foundation (NSF) to investigate how to make use of a potential ally in public climate education: your local TV weathercaster. The TV weathercast is uniquely poised to provide effective climate change educational segments for a number of reasons. It is among the most reliably watched segments of most local news programs, with many people reporting that they watch the local news primarily for the weather report. This advantage holds even as increasing numbers of people obtain their information from digital media, as local weathercasters increasingly provide weather information to viewers across a range of digital platforms. Further, the large audiences reached by local weather forecasts are diverse in age, income, education, and racial demographics. Across their broad audiences, meteorologists and weathercasters are viewed as trusted sources of non-political climate change information.

While climate scientists are typically ranked as the most trusted source of climate change information in the US, scientists have limited access to the public and in certain demographics, particularly conservatives, trust in scientists has declined. Weathercasters on the other hand are not only trusted, they have strong access to the public, strong communication skills, and the information they convey is not viewed as political, since the weather itself is not political. The weather forecast is the most common voluntarily sought form of science education, and previous research suggests that it is an effective venue for related topics, such as geography, public health, and hurricane risk. 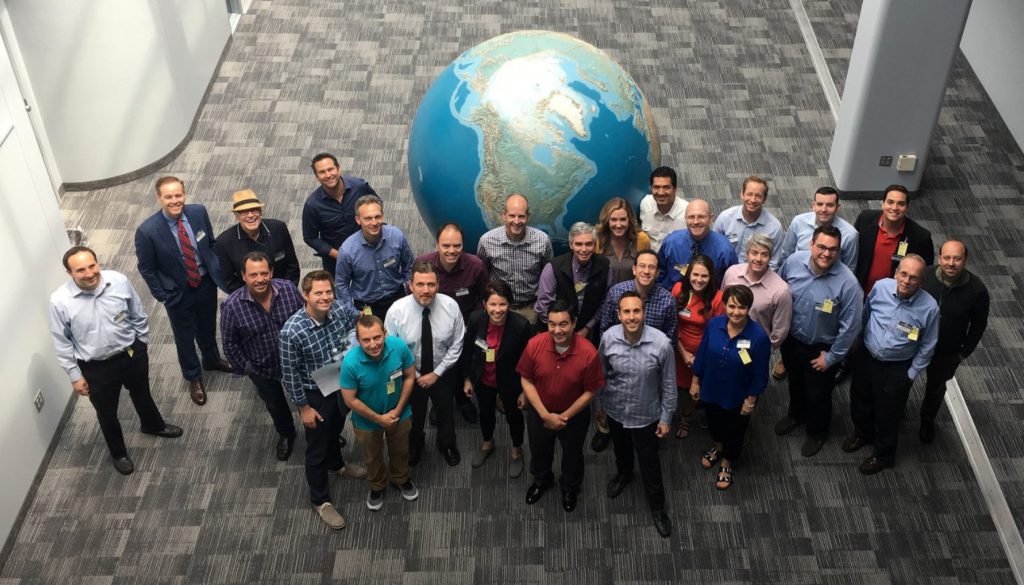 In 2010, Dr Maibach and colleagues completed a survey of over 500 weathercasters to better understand their potential interest in offering science and climate change information as part of their regular weather forecast. He found that 94% of responding weathercasters said that weathercasters were the only person in their newsroom trained in science or the environment. Many meteorologists and weathercasters have scientific backgrounds, and all have extensive experience as science communicators. For example, following earthquakes in Haiti and Chile that gained international headlines, many local weather people became the station expert in plate tectonics, offering complex scientific concepts about why earthquakes occur in accessible terms and examples.

Perhaps the greatest benefit of offering climate change education in conjunction with the local weather forecast is the potential to help viewers link climate issues with their personal lives. People learn complex information most quickly when it is offered in the form of concrete examples and narratives that are easily applied to their experience. The more times they encounter information presented this way, the stronger the lesson will be. When weathercasters are able to present information about climate change in conjunction with related local weather events, it helps people understand that they are personally experiencing the effects of climate change. Therefore, they are more likely to view it as a serious issue that requires their attention. Severe weather events offer particularly strong climate change learning opportunities, as many of these events are becoming more common and more severe as a result of global warming.

While many of the weathercasters who participated in Dr Maibach’s 2010 survey indicated their interest in reporting on climate change, 90% said that they would need additional resources to do so. At the local level, most weathercasters lack access to climate scientists for interviews or commentary, and do not have the time to sift through the latest peer-reviewed articles. They would also need additional high quality graphics and visual materials, and most simply do not have the time or resources to produce additional segments about climate change in a strategic manner.

As part of their NSF-funded initiative inspired by Joe Witte, Dr Maibach, Climate Central’s climate scientist Heidi Cullen, and their colleagues partnered with a local TV station in South Carolina in 2010 to find ways to overcome these barriers and produce effective educational segments about climate change at the local level.

Each minute-and-a-half segment was designed to be a self-contained short lesson on climate change, focusing on one or two major points selected to be as connected as possible to the experiences of the viewer. For example, a segment on poison ivy explained how certain plant pests thrive under increasing carbon dioxide levels and are likely to become more prevalent without intervention. The team’s goal was to show viewers that climate change is an issue that already impacts their everyday lives, thus helping to change their misperception of climate change as a distant problem.

To assess the effectiveness of the program, Dr Maibach and his colleagues needed to measure climate change beliefs in local viewers both before and after the segments aired. To do so, they randomly dialled numbers to conduct phone surveys in the station’s local area, collecting the initial climate beliefs of over 1,000 viewers. A year later, after the Climate Matters segments had aired, they were able to repeat the survey with 500 of the original participants, and survey over 900 new participants.

The results showed that Climate Matters was a success. After airing the segments, station viewers were more likely to report that they were certain that climate change was happening, and that they felt it was a harmful force, regardless of whether or not they specifically remembered seeing the segments. Those who were able to recall specific Climate Matters segments were also more likely to attribute climate change to human causes. The program had reached its target audience and influenced their perceptions about climate change.

Six years after the initial Climate Matters pilot, the program has blossomed into a resource for informal climate education nationwide. Every week, a team of meteorologists, research scientists, data analysts, journalists, and creative designers at Climate Central put together a comprehensive package of content about various current climate change topics. Each package includes TV-ready visuals, detailed descriptions of the latest science behind the week’s topic, current climate change information from NASA and the National Oceanic and Atmospheric Association (NOAA), and a round-up of new climate research findings. The packages are designed to be current and relevant, and to dramatically reduce the production burden for weathercasters interested in including climate change education as part of their segments.

Climate Matters has also expanded beyond the short TV weather segment to support weathercasters in climate change education across a variety of mediums. To engage with growing digital content consumption, Climate Matters offers interactive media and tweetable facts that can be easily embedded in station websites or social media. They provide a range of resources that are suitable for the local community outreach presentations that many weathercasters give. Climate Matters also provides video and production support to meteorologists who are interested in developing and producing their own original climate change stories and specials.

From a one-year pilot-test with one weathercaster in South Carolina, the program has grown into an incredible force for education. ‘We currently have over 430 weathercasters participating in the project (including 31 who broadcast in Spanish), who broadcast from 262 stations in 136 of America’s 210 media markets, including 24 of the top 25 media markets,’ says Dr Maibach. ‘Moreover, on air reporting about climate change by weathercasters increased over 1,200% in the four-year span from 2013 to 2016.’

On September 1st 2017, Climate Matters will begin to offer resources to non-weather journalists in hopes of extending the reach of local climate reporting and education. As humanity continues to face the ever-increasing threat of global climate change, a challenge that requires participation from people in all walks of life, programs such as Climate Matters offer an innovative approach to science education and involvement. 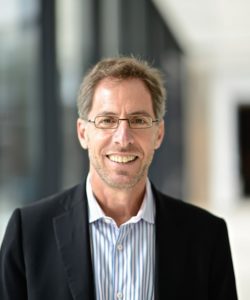 Dr Edward Maibach began his educational career at the University of California, San Diego with a Bachelor’s degree in Social Psychology in 1980, and continued on to receive a Master’s in Public Health from San Deigo State University in 1983. He was then awarded his PhD in Communication Science from Stanford University in 1990, completing research on social marketing and campaigns to encourage healthy behavioural changes. During his career, he has served as an Assistant Professor at Emory University (1990–1995), Adjunct Associate Professor at Georgetown University (2002–2003), and Professor at George Washington University (2005–2007), teaching graduate level courses in health communication and social marketing. He has also served as Worldwide Director of Social Marketing for Porter Novelli International, Associate Director of the National Cancer Institute, and Board Co-Chair for Kidsave International, developing innovative marketing and communication strategies. He joined George Mason University in 2007 as Professor and Founding Director of the Center for Climate Change Communication, the nation’s first research centre devoted to the challenges of communication and behavioural change associated with climate change.