Who are we? Why are we here? And where did we, as humans, come from? Each of these questions is fundamental to understanding our presence here on Earth, and have over time led to a split in opinion amongst scientists. One such example of this comes from theorising answers to another all-important question: what was Earth’s first animal? Professor Bernd Schierwater at The University of Veterinary Medicine Hannover has spent the past twenty years searching for the answer, which he now believes could rest on tiny sticky and hairy creatures called Placozoa.

When asked to think of the term ‘evolution’, many people will automatically think of two things: firstly, monkeys – due to the widespread belief that humans evolved from apes (we actually evolved simultaneously from a common ancestor); and secondly, Rudolph Zallinger’s March of Progress image. However, you have to go back a lot further in time to find the true ancestor that humans actually evolved from.

According to Professor Bernd Schierwater, a renowned zoologist at The University of Veterinary Medicine Hannover, and a leading expert in early-Earth animals, the first animals on Earth were tiny organisms with only six different cell types and the simplest animal body, called Placozoa. What are these, you ask? Well, as Professor Schierwater himself puts it: ‘Placozoa are the most unique animals one can think of. They have no discrete organs, no clear nerve or muscle cells.’ In fact, only six different cell types perform all of the animal’s functions – from eating, smelling and seeing, to moving, growing and reproducing.

Placozoa crawl as flat, tiny plates over hard surfaces in most oceans. They were originally thought to only live in warm waters, but Professor Schierwater now predicts that they can be found in cooler waters as well. They also live relatively close to the surface, as their food (algae) relies on the sun’s energy, so Professor Schierwater and his team rarely have to ‘take their trousers off to collect them’. 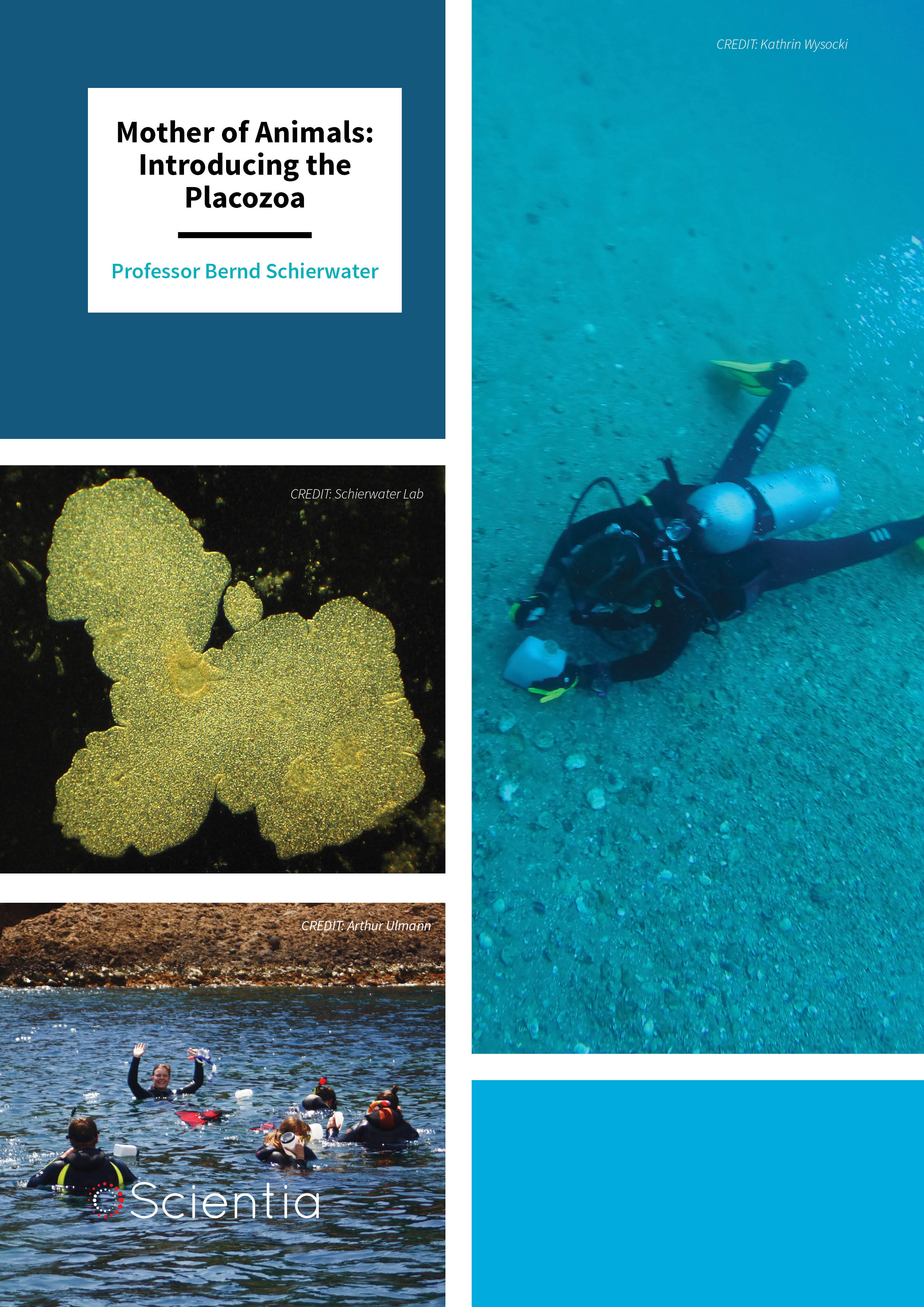 ‘If we want to learn about animal evolution, why not start with the smallest, simplest and potentially most ancestral animal? If you can’t understand the simple, good luck with the complex!’ 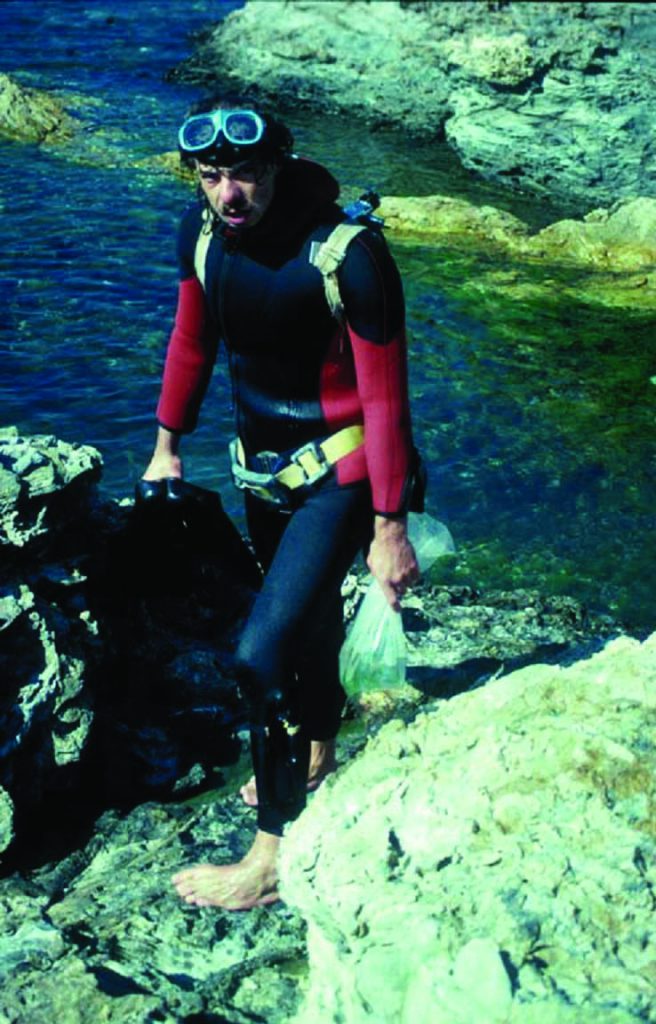 Bernd Schierwater as a graduate student collecting at Banyuls-sur-Mer, France. Collecting placozoans from different depths can be exhausting, but fortunately placozoans can also be sampled in shallow waters with your trousers on. CREDIT: Professor Martin Wahl

Placozoans were first identified back in 1883 by the German zoologist Franz Eilhard Schulze, in an aquarium based in Graz, Austria. The Placozoa species that he discovered he labelled Trichoplax adhaerens, derived from the Greek ‘thrix’ (meaning ‘hair’) and ‘plax’ (meaning ‘plate’). The term ‘adhaerens’ came from the animal’s tendency to ‘stick’ to glass, meaning that their name literally translates to ‘sticky hairy plate’ – which more or less tells you what they look like. In the field, the ‘sticky hairy plate’ creatures have been ‘frequently overlooked’ for more than a century, with no reported sightings even at highly active marine research stations where placozoans occur in high abundance.

But why are they so important to scientific research? And why has Professor Schierwater dedicated most of his academic career to understanding them? Mainly because they are incredible organisms that we can learn a lot from.

Everyone knows that you cannot run before you walk, yet that principle is sometimes overlooked within science – especially within this area of research. Genetics is a fascinating area of science, providing us with medicines for an array of different health conditions, yet it is also highly complex, and requires incredible precision in order to utilise effectively. With this in mind, understanding how the genetics of a complex organism, such as a human, works is no easy task – after all, you cannot build a house without laying the foundation first.

The average human contains over 30 trillion cells, each of which are encoded for by specific gene interactions. Given that there are more than 20,000 active genes in humans and an almost unlimited number of possible gene interactions, understanding how to put together a jigsaw puzzle this size is incredibly difficult. Yet this is, in essence, what many scientists are currently doing. So where are we going with this?

The placozoan Trichoplax adhaerens provides researchers with an organism that is much easier to study, understand and utilise in future drug design. As Professor Schierwater said in a recent Current Biology Magazine article: ‘If we want to learn about the evolution and structural organisation of genomes, why not start with the smallest, simplest and potentially most ancestral animal? As a rule of thumb, it is often helpful to first learn the basics before you analyse more complex entities. A lot can be learned from these tiny masters of morphological simplicity, especially in terms of cancer research, neurology and the evolution of organs.’

However, despite Professor Schierwater’s ongoing dedication and passion for Placozoa research, many other researchers in the field remain unconvinced. This has been mainly because of the biological controversy surrounding how the animal tree initially developed. To understand this requires a little biology lesson. 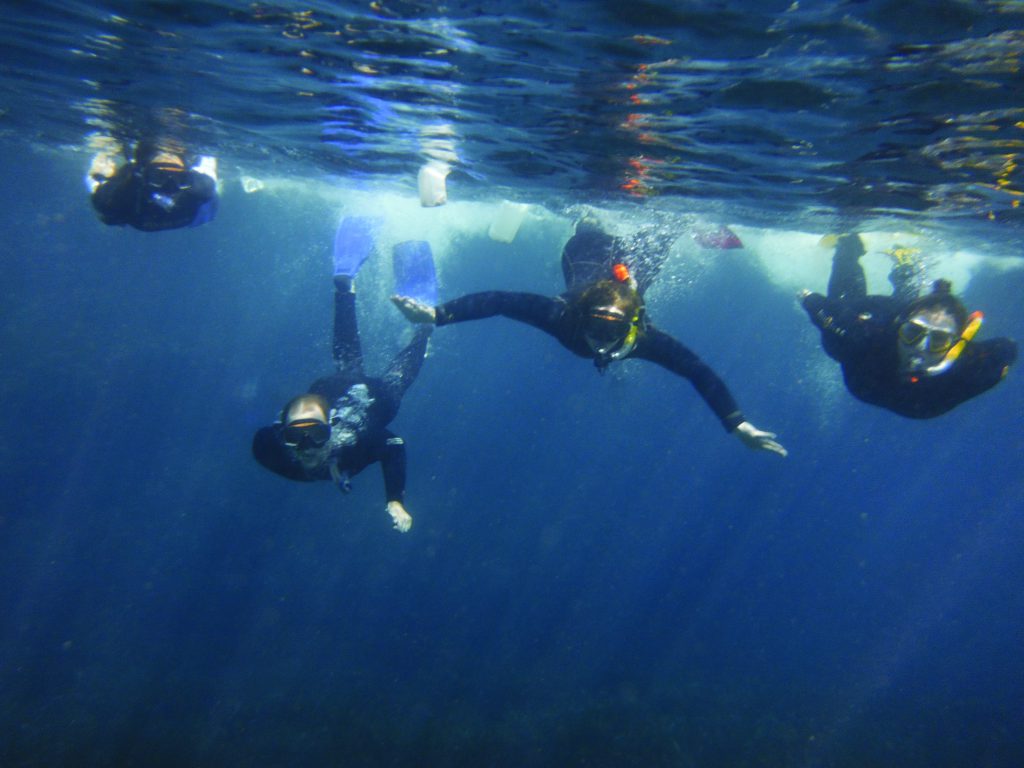 Welcome to Biology 101. There are five distinct groups that make up the metazoan animal tree of life. The most derived group is that of the ‘Bilaterians’, which includes most animals – humans, fish, insects, worms, etc. This group also differs to the other four groups, in that Bilaterians develop from three germ-cell layers (the layers of cells that form during reproduction), rather than two.

The other four groups are known as Diploblasts, due to forming from two germ-cell layers rather than three. These groups include Poriferan (sponges), Ctenophores (comb jellyfish), Cnidarians (corals and jellyfish) and Placozoa. We, as humans, evolved as a result of the relationship between these groups, yet it is not clear what the exact nature of that group relationship was.

As Professor Schierwater sums it up: ‘There are 105 ways that five taxa (groups) can be arranged in the animal tree, and nearly half of these have been offered as hypotheses for the relationships of these five taxa.’ This, in turn, gives rise to one of zoology’s longest-running and hotly-debated topics: which metazoan animal came first – Cnidarians, Ctenophores, Poriferans or Placozoa?

According to Professor Schierwater and his colleagues, the answer is ‘Placozoa’. Following research at the American Museum of Natural History in New York and Yale University, Professor Schierwater’s team examined genes and all other available data from several animal species representing the five critical animal groups. 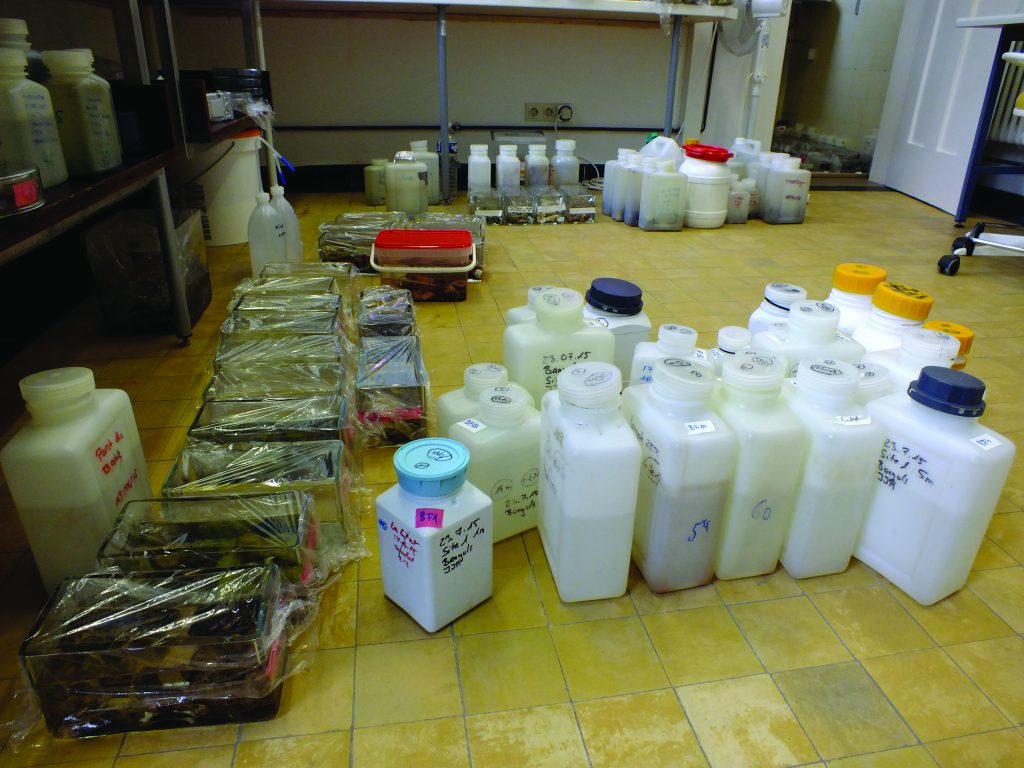 Samples collected from the field are transferred to the laboratory in Hannover for microscopic inspection. Often several hundred samples from different oceans worldwide are cultured in the laboratory at the same time. CREDIT: Kathrin Wysocki

The team developed a model capable of determining how and when each animal group evolved, i.e., they built an evidence-based animal tree that could then be used to test the different hypotheses. From this work, Professor Schierwater found that Placozoa were not only the first ‘base’ animal on the tree, but he also found evidence that Bilaterians (which include humans) actually evolved independently from Diploblasts (jellyfish, sponges, etc.) – going against a long-standing theory.

In other words, an ancestral sponge had long been believed to be the base animal, from which each of the five groups evolved in a certain order. Professor Schierwater’s research has challenged that view, finding that animals such as jellyfish and sponges actually evolved in one route from a Placozoan base animal, while other animals such as insects and humans evolved at the same time in an entirely separate pathway.

Certain zoologists remain sceptical about this theory though, due to contradictory evidence surfacing from recent advances in DNA sequencing. However, such advances have regularly been shown to produce the most short-lived hypotheses that the natural sciences have ever seen. Thus Professor Schierwater remains unshaken and says, ‘Placozoa are a “natural” fit at the base of the metazoan tree, especially when considering ‘comparative organismal evidence and genuine biological knowledge’.

A lot more research remains to be done, but one thing is for certain – these tiny sticky hairy plate creatures require a lot more attention moving forward. Not only could they answer one of life’s great questions, but they could also support research into the design and development of several drugs for a variety of diseases. It is no surprise that Professor Schierwater has such a passion for them. 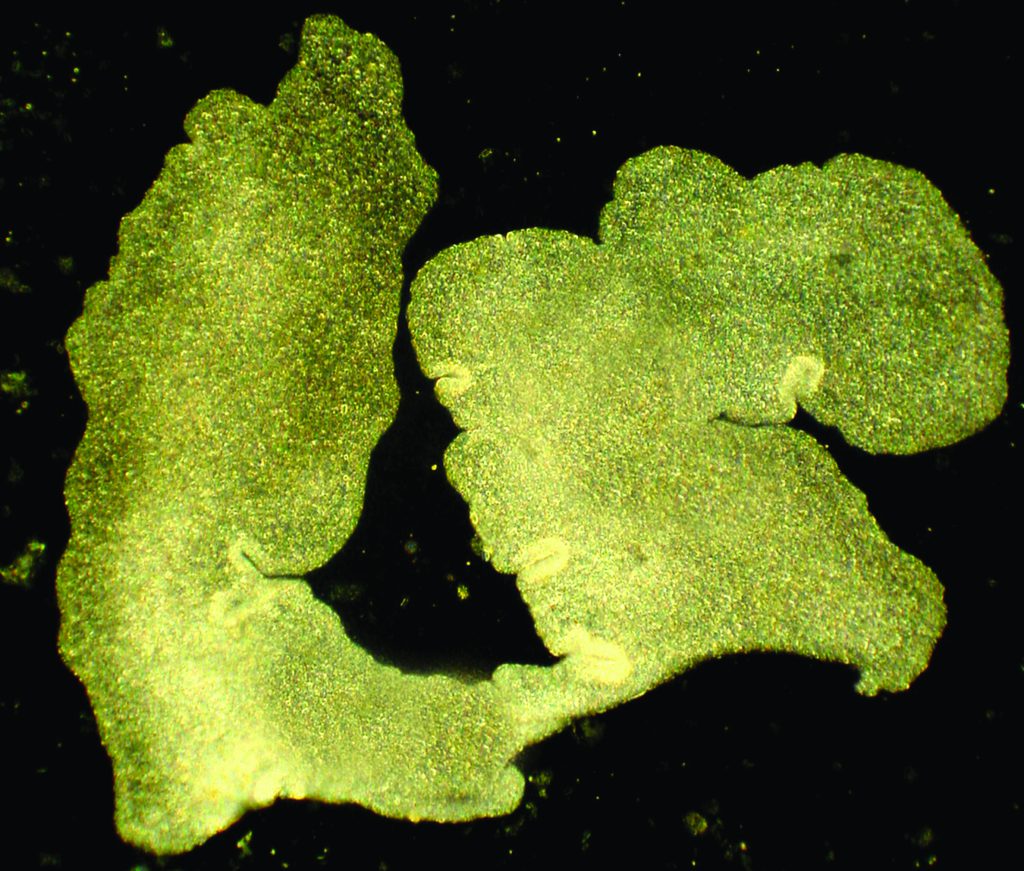 A vegetatively reproducing placozoan specimen, which soon will divide into two daughter individuals of about the same size. CREDIT: Schierwater Lab

He even remembers the first day he encountered Placozoa in incredible detail, citing an undergraduate presentation from his then-teacher, Professor Carl Hauenschild. Little did he know at the time, but that presentation would later go on to shape the rest of his academic career.

‘It was on a Tuesday night, around 6 pm on 11 December 1979, when my most respected teacher, Carl Hauenschild, listed several reasons for Placozoa possibly being a basal metazoan phylum, i.e., the ‘base’ animal of the Metazoan animal tree,’ he says. ‘The black and white pictures thrown from the solid 30-year-old Leitz slide projector were not very impressive, yet they somehow fascinated me. Already I knew, I want to study Placozoa when I become a researcher.’

And that he did. Almost forty years on, and Professor Schierwater’s dedication to the research of Placozoa is unparalleled. He is a highly renowned and respected zoologist and the leading expert for placozoans. Through his work at The Institute of Animal Ecology and Cell Biology at the University of Veterinary Science Hannover, he and his team have found that Earth’s first animal could be none other than a ‘sticky hairy plate’. 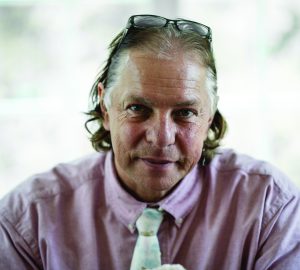 Professor Bernd Schierwater is a German zoologist who has dedicated his academic career to the study of the Placozoa. Following his BSc in Biology at the Technical University Braunschweig in Germany, Prof Schierwater went on to study a BA in Psychology and an MSc in Biology, before conducting his PhD under the guidance of Carl Hauenschild and Fritz Wagner. He later went on to work as a Postdoctoral Research Fellow at Yale University before becoming an Assistant Professor at the University of Frankfurt, Germany, and Associate Professor at Freiberg University, Germany. He currently works as Professor of Zoology at the University of Veterinary Medicine Hannover and also as a Research Associate at both Yale University and the American Museum of Natural History New York.