May 16, 2019Biology, Health and Medicine, Psychology and Neuroscience

More than a century of research in neuroscience has demonstrated that neurons and specific areas of the cerebral cortex are specialised in their function. For example, separate aspects of a visual stimulus (such as its colour, shape, and motion) are processed by specialised neurons distributed across several cortical areas. A critical question is how information from these separate neurons is combined in the brain to create a coherent visual perception. Professor Wolf Singer, at the Max Planck Institute for Brain Research in Frankfurt, has devoted decades of research to understanding the neurophysiological basis of our mental lives, including how it is that we create our perception of a unified world.

Neural Communication in the Brain

The central nervous system in humans is comprised of billions of neurons that communicate with one another to share information. This results in a hugely complex system of trillions of connections between neurons. Neurons communicate using electrical events (known as action potentials) and chemical neurotransmitters, creating unfathomable complex patterns of activity.

Higher cognitive processes, such as perception, attention, memory, and language, all arise from the activities of neurons and the communication between them. These activities are often rhythmic and sometimes even synchronous – they are then referred to as neural oscillations. These oscillations can be characterised by their frequency, amplitude, and phase just as the oscillations of a pendulum. Oscillations can become synchronised within specific groups of neurons and this is known as ‘local synchronisation’. However, the oscillatory activity of neurons or groups of neurons that are physically spaced further apart can also synchronise, and this is known as ‘global synchronisation’.

The activities of neurons can be observed using a variety of neurophysiological techniques, and these are utilised depending upon the requirements of the research question. The gold standard is to study the activity of individual neurons – that is, single cell recordings – with micro-electrodes and optical methods. These techniques are invasive and therefore cannot be used for research in human studies. It is also possible to assess the collective activity of large populations of neurons distributed across the brain with electroencephalography, magneto-encephalography or magnetic resonance tomography. These technologies have a number of severe shortcomings related to their poor spatial or temporal resolution, but they are non-invasive and can be applied in obtaining measurements from human research participants. 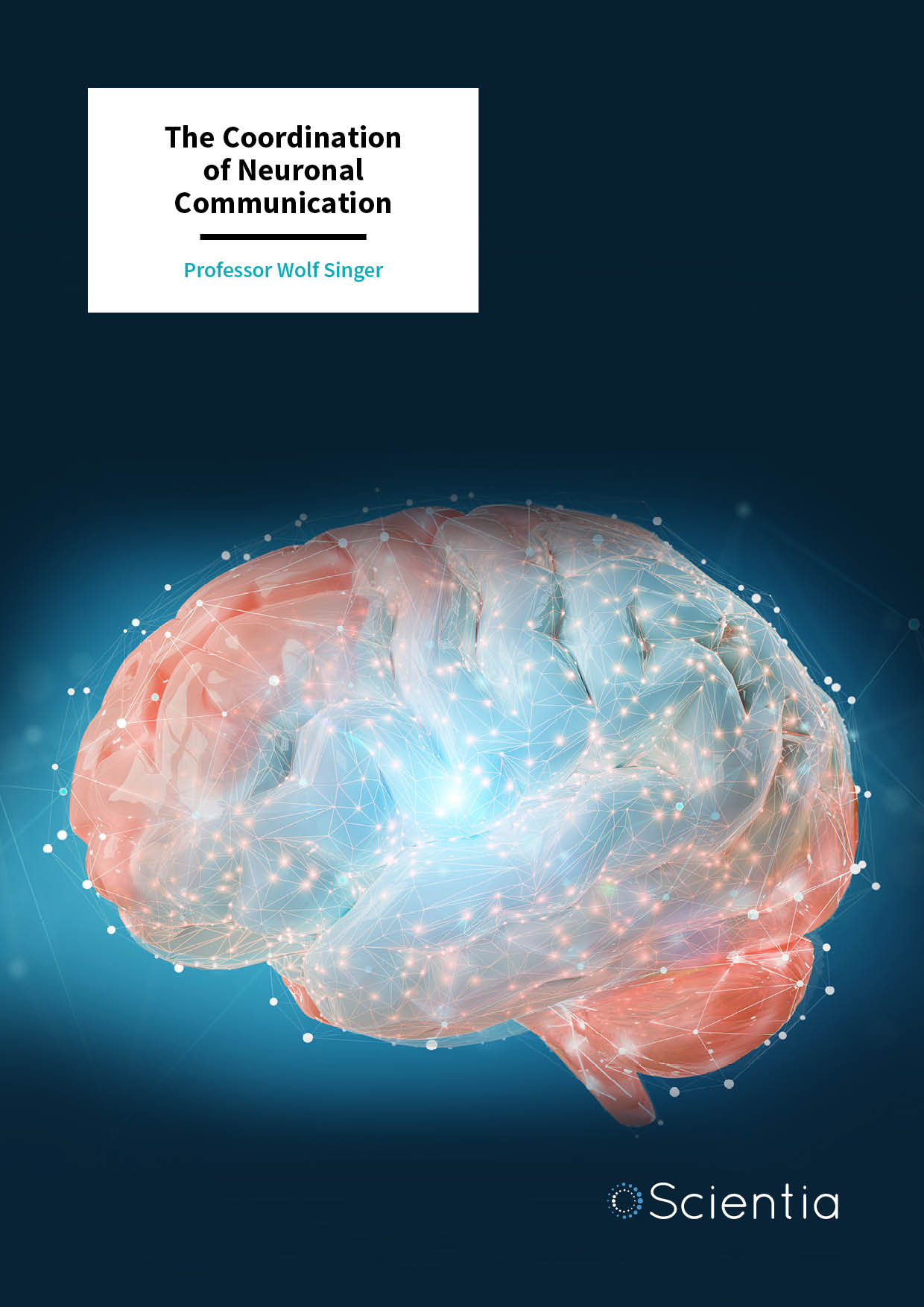 To date, neural oscillations and synchronisation have been linked to many different types of cognitive function, including visual perception. But critical questions still remain – including that of the specific functions of observable patterns of oscillation. The question how the responses of neurons that are distributed both within and across different areas of the brain are bound together to give rise to coherent perceptions has been a particular interest for Professor Wolf Singer, of the Max Planck Institute for Brain Research in Frankfurt, for many years. 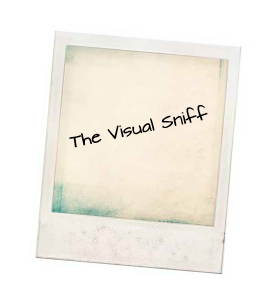 Professor Singer’s early research, conducted in the 1980s, focused on neuronal plasticity and the specific question of how experience shapes the development of the visual system. These experiments were conducted primarily in young and adult cats. By plasticity, we mean the extent to which neurons can change and adapt as a result of experience and learning.

It was already known from the seminal studies of Hubel and Wiesel that during the so-called critical period for visual development, neurons in the visual system remain malleable and adapt in response to visual exposure. This experience-dependent plasticity is an essential prerequisite for the maturation of normal visual functions.

Using convergent neurophysiological, neuropharmacological, and behavioural approaches, Professor Singer provided evidence that the mechanisms mediating developmental plasticity closely resemble those underlying learning in the adult and, like the latter, are supervised by modulatory systems that control arousal and attention.

The most notable finding from this work, however, was Professor Singer’s replicable observation that specific visual stimuli result in synchronous oscillatory activity in groups of spatially segregated neurons. To put it more simply, he saw that groups of neurons, which could even be located in separate areas of the brain, were firing at the same time within intervals of a few milliseconds when participating in the processing of features belonging to the same object.

Professor Singer was aware that similar oscillations had been observed almost a decade before in the olfactory bulb – a neural centre in the brain associated with the sense of smell – of rabbits while they were sniffing. In an autobiographical work, Professor Singer recounted his sense of the importance of this observation which led to a new and exciting research trajectory: ‘I took a Polaroid screen shot, wrote on it “the visual sniff,” and taped it on the rack, where it remained for several months.’

From a methodological perspective, the techniques utilised in Professor Singer’s laboratory reflected a significant step forward, allowing simultaneous long-term assessment of the activity of larger groups of spatially segregated neurons in awake animals. These techniques were later adopted widely in the research field. In collaboration with other scientists, Professor Singer proceeded to explore further the observations of synchronous oscillatory activity – with intriguing theoretical implications. 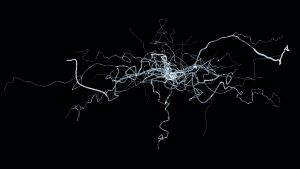 Clear and distinct patterns were observed. Both conscious perception and unconscious processing were found to result in local synchronisation of responses in areas involved in the analysis of the visual stimuli, suggesting that both unconscious and conscious processing engage similar local circuits. However, global oscillations reflecting synchronisation of neurons distributed across the brain were observed only when stimuli were consciously perceived. Critically, Professor Singer and colleagues proposed that this global synchronisation is one of the mechanisms through which stimuli become available to conscious awareness. 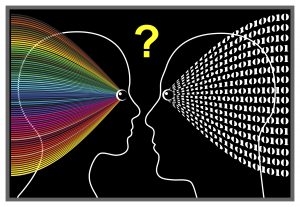 By the turn of the millennium, research into synchronised oscillatory activity began to look at how specific disturbances may account for the features of psychiatric disorders. Disturbances in the oscillatory activity of neural responses of schizophrenic patients had been proposed by this time, but little evidence was available to show how such disturbances might reflect, or be associated with, cognitive performance, of which certain elements are known to be impaired in schizophrenia.

Work by Professor Singer and colleagues extended previous work to investigate how such disturbances in neural synchrony in schizophrenia would be manifested in a behavioural task. More specifically, the researchers assessed the responses of patients on a Gestalt visual perception task.

In Gestalt perception tasks, separate parts of the image have to be bound together. For example, if you look at a cat, the signals from the fluffy fur, long tail, bright eyes, pointed ears, and so on have to be integrated in order to generate what you are consciously aware of, the overall image of a cat. It is known that schizophrenic patients, and to some extent also patients suffering from autism spectrum disorders, are impaired in perception tasks requiring integration of details into a coherent whole. As this integrative function is thought to depend on the large-scale synchronisation of local oscillatory processes it was hypothesised that patients might have deficits in the temporal coordination of neuronal activity.

Using an advanced analysis of electroencephalography data, Professor Singer and colleagues did indeed observe impaired large-scale synchrony of neurons distributed across the brain of schizophrenic and autistic patients. Most importantly, the impairment of temporal coordination was correlated with the severity of the clinical symptoms. The researchers proposed that this disturbance of synchronisation is a likely cause for at least some of the cognitive impairments commonly observed in schizophrenia and autism.

Current work in Professor Singer’s laboratory is exploring further the functional significance of the complex dynamics emerging from the dense and reciprocal interactions between large numbers of neurons taking advantage of a new and enhanced technique for recording neural activity. In consideration of findings to date, Professor Singer has proposed that the brain adopts a computational strategy that capitalises on the complex dynamics generated by networks of reciprocally coupled neurons.

To test this theory, Professor Singer is in the process of conducting a series of studies designed to further investigate the links between neuronal dynamics and perception. Critically, in addition to obtaining correlational evidence – the dominant approach in the field to date – Professor Singer aims to obtain causal evidence. In other words, he aims to manipulate the system using learning paradigms in order to investigate the consequences on network dynamics and perception. However, in view of the mind-boggling complexity of the system, Professor Singer feels that he and his colleagues are still far away from understanding the neuronal algorithms underlying even simple cognitive and executive functions. However, with the advent of techniques that allow simultaneous recording of activity from up to a thousand neurons and the availability of nearly unlimited computer power for the analysis of these data, there is now some hope to at least test some of the advanced theories.

Given the increasing recognition of disturbances in neural dynamics and the relevance to understanding psychiatric disorders such as schizophrenia and autism, Professor Singer further elaborates that ‘the results are likely to be relevant for clinical investigations and diagnostics by providing interpretable markers of dynamic processes.’ This would be a revolutionary achievement in terms of clinical psychiatry, where diagnosis (and thus treatment) is vulnerable to criticism due to being inherently subjective.

Thus, over more than three decades, work conducted by Professor Singer has made a unique and substantial contribution to our understanding of the neurophysiological underpinnings of complex cognitive function. Findings already have significant implications for our understanding of how we create coherent visual scenes, and how information becomes available in our conscious awareness. Ongoing work promises to shed even more light on how it is that the neural substrates in the brain support our perception and understanding of the world around us.

Professor Wolf Singer studied Medicine in Munich and Paris, obtaining his MD from the Ludwig Maximilian University in Munich in 1968. He then completed his PhD at the Technical University in Munich in 1975. He is the Director emeritus at the Max Planck Institute for Brain Research in Frankfurt, Founding Director both of the Frankfurt Institute for Advanced Studies and of the Ernst Strüngmann Institute for Neuroscience, and Scientific Director of the Ernst Strüngmann Forum. His research is focused on the neuronal substrate of higher cognitive functions. Professor Singer is the recipient of an outstanding number of honours and awards, commiserate with his lifelong contribution to neuroscience and society.

A Artola, S Bröcher, W Singer, Different voltage-dependent thresholds for the induction of long-term depression and long-term potentiation in slices of the rat visual cortex, Nature, 1990, 347, 69-72.

JP Rauschecker, W Singer, The effects of early visual experience on the cat’s visual cortex and their possible explanation by Hebb synapses, The Journal of Physiology, 1981, 310, 215–239.