Professor Stephen Goff of Columbia University studies transmissible cancer in shellfish. His interest in viruses and their role in cancer led him to initially research a potential viral cause for leukaemia that is present in shellfish. The cancer did not have a viral origin, but to his surprise, it emerged that the disease was directly transmissible from shellfish to shellfish through contagious cancer cells.

Cancer is a disease of uncontrolled cell proliferation, migration and resilience that is typically restricted to the organism in which it originated. Tumours arise in various tissues as a consequence of genetic mutations. Such mutations sometimes occur spontaneously and sometimes are induced by carcinogenic toxins or viral infections. When these mutations confer the ability to proliferate in an uncontrolled fashion, evade detection by the immune system, invade other tissues, and prevent cell suicide programs that would otherwise kill malfunctioning cells, the result is a malignant, metastatic cancer. While cancer cells often invade other tissues within the same individual, typically they do not spread from individual to individual. As bad as cancer is, it doesn’t quite induce the same unease as contagious diseases such as those caused by Ebola or HIV. It is perceived as a personal disease. People speak about beating their cancer as a personal struggle, whereas contagious diseases are ‘fought’ on a societal level – just look at the huge mobilisation to contain the latest Ebola outbreak, or the hysteria and stigma that surrounded the HIV/AIDS epidemic of the 1980s. Consequently, for some, the concept of contagious cancer may add an unwelcome dimension to this already feared disease. Such transmissible cancer is the subject of some of the most recent research of Professor Stephen Goff of Columbia University. No contagious cancers are known to affect humans, but examples have been observed in a handful of other species: Tasmanian Devils, dogs and certain shellfish, including clams, mussels and cockles. In Tasmanian Devils, transmissible cancer presents as facial tumours, which are spread when the animals fight each other and inflict and receive facial bites. In dogs, the tumours are spread by mating, making for a particularly nasty venereal disease. Goff has been instrumental in characterising the basis for transmissible cancer in shellfish. However, his research was not originally focused on transmissible cancers, but rather towards tumour viruses and the mechanisms by which they cause cancer. 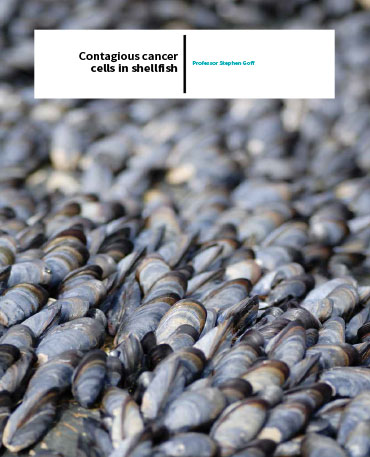 ‘The tumours did not arise in the usual way, by mutations in somatic cells of the host, but had spread between animals as a contagious disease’ 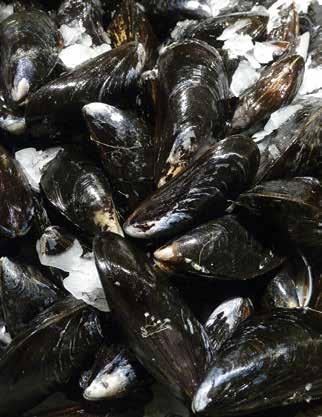 Goff began his research career developing methods for construction of recombinant DNAs. His graduate work centred on genetic studies of the Simian Virus 40 (SV40), a DNA tumour virus, and its use as a vector for gene transfer into mammalian cells. In his postdoctoral work in the laboratory of Dr David Baltimore, he became fascinated with retroviruses, of which HIV-1 is an example, and what they can tell us about basic cellular biology. Viruses operate by ‘hijacking’ cellular machinery in an infected cell to force the cell to produce more viral particles. These new viral particles are released and spread to infect more cells. However, retroviruses do not just commandeer cellular machinery – they actually insert and integrate their genetic material into the DNA of the infected cells. Sometimes this insertion can disrupt the DNA in ways that cause cancer. This is called insertional mutagenesis. These viruses can also recombine with cellular genes and incorporate them into their own genomes, generating transducing viruses that transfer the genes into infected cells. Goff tells Scientia about his early motivations for viral research and its applicability to our understanding of molecular biology and cancer: ‘I’ve been interested in viruses (phage, DNA viruses, and retroviruses) throughout my career. I consider them wonderfully efficient at exploiting cell machinery for their needs, and therefore handy in revealing the most interesting pieces of that machinery. I was motivated to focus on retroviruses by their amazing life cycle – their ability to make DNA copies of an RNA genome and insert that DNA permanently into the host genome. The study of these viruses has revealed many aspects of cellular molecular biology, and has had a huge role in developing our current understanding of cancer.’

Goff was asked by a marine biologist to help investigate if a cancer found in the circulatory system of molluscs, called disseminated neoplasia, had its basis in a viral infection. The cancer is predominantly lethal to bivalves, which include clams, cockles and mussels. Goff told us about how he became involved in studying shellfish cancer: ‘I was recently led into studies of a leukaemia-like disease in molluscs, disseminated neoplasia, by Carol Reinisch, a marine biologist at Woods Hole Oceanographic Institute. She solicited our help in exploring whether a retrovirus might be involved in this disease.’ The team began examining cancer samples from shellfish to determine if the cancer had a viral origin. What they discovered surprised them: ‘Our examination of the tumour cells found no viruses, but instead revealed high levels of expression of an endogenous retroelement (which we named Steamer). The element had undergone a dramatic copy number expansion in the tumour cells, and examining the sites of integration of the new copies gave us a big surprise: many integration sites in tumour DNA isolates from disparate locations were identical, suggesting that the tumours were related. Genotyping the tumour DNAs confirmed that all the tumours were derived from a single clone – and that this tumour genotype did not match that of the host animals.’ Given that the tumours did not match the genetic makeup of the molluscs, and tumours from different molluscs were genetically similar, the team were left with only one conclusion: ‘The tumours did not arise in the usual way, by mutations in somatic cells of the host, but had spread between animals as a contagious disease. Since then we have found similar tumours spreading in other molluscs.’

The team have also discovered an even stranger case of a transmissible cancer – one that can cross the species barrier. The team analysed the cancer found in a type of clam called the golden carpet shell. In analysing the genetic makeup of the tumours they found that the tumours did not arise from a different individual the host species – but rather they derived from an individual of a distinct species called the pullet shell clam. To make things even stranger, this cancer is not commonly found in the present pullet shell clam population. The team think that the cancer originated in the pullet shell and spread into the golden carpet clam, and that the original species may have then developed resistance to the tumours over time and so is not afflicted by the disease today.

Recorded instances of cancer transmission are relatively rare – the shellfish and mammalian examples discussed in this article comprise the extent of known species for which cancer transmission has been recorded. However, Goff believes that it may be more common than we think and that new examples are just waiting to be discovered. 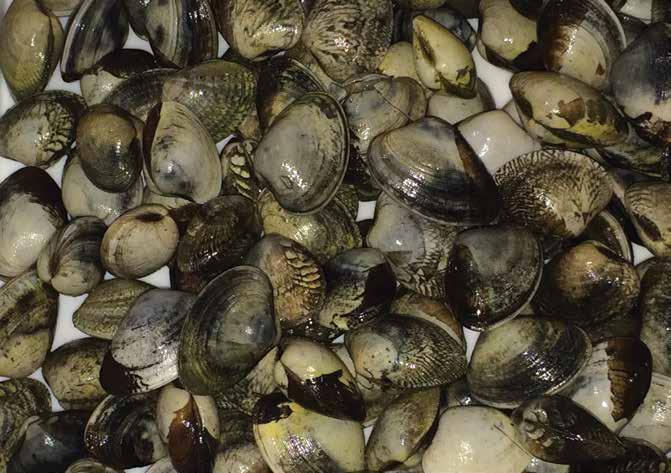 Transmission of cancers – how do they spread?

So given that there is clear evidence of transmissible tumours between certain shellfish, how do the tumours get from one individual to another? This is a question that the team want to answer. In the mammalian examples of transmissible tumours, transmission can be clearly linked to physical contact, either through fighting or mating (which, if we’re honest, are two of the all-time favourite activities of most mammals). However, in the marine environment, where there is limited physical contact between shellfish it appears that the water itself may act as a conduit for contagious cancer cells to spread and infect new hosts. Infected molluscs might release infectious cells in their faeces, which could easily be picked up by other molluscs, thereby ‘seeding’ them with new tumours. Molluscs feed by filtering food from seawater and so might be particularly susceptible to ingesting infectious cells in the water. Molluscs are not thought to have a very sophisticated immune system, and may be incapable of rejecting introduced tumour cells with a genetically different makeup. Humans possess a much more sophisticated immune system, which can identify and reject a variety of foreign tissues and pathogens, so it is perhaps unlikely that human cancers could become transmissible. However, cancer transmission has been possible in some mammals, such as the dogs and Tasmanian Devils mentioned previously, in special settings. They may be the victims of an unfortunate and highly unlikely set of circumstances, whereby a tumour with just the right biological characteristics to avoid inter-individual immune rejection developed and had the opportunity to spread through inter-individual physical contact. In human patients who are severely immunocompromised, or between patients who are genetically very similar, such as identical twins, there is perhaps more scope for cancer transmission, although the risk is likely to still be very low, since a superficial tumour, physical contact and perhaps broken skin on the recipient tissue would likely all be required for successful transmission.

Goff talked to Scientia about his hopes for future research on viruses and their impact on cancer: ‘I think work on retroviruses will continue to reveal new aspects of biology and genome evolution. In my lab we are looking to identify and characterise new host gene products that impact on retrovirus replication: factors that either inhibit their spread, or are exploited by the viruses to promote their spread. These are telling us about the host responses to virus infection, and the way we hosts are adapting to (and incorporating) virus genomes in our species. They are also specifically telling us much about cancer, because of their ability to directly induce cancers, and because of their highlighting the conserved pathways that lead to non-viral cancers.’

He also spoke about his plans for further research into transmissible cancer: ‘Broadly, my lab will continue to study the replication of retroviruses, and search for new aspects of the virus-host interaction. With respect to the contagious cancers in molluscs, we are interested in identifying the mutations that led to the initial oncogenic clone; and those that are involved in its ability to spread and colonise a new host individual. We are also interested in the basis of restriction of most of the tumours to spread within the species of origin, and the explanation for the rare cases of interspecies transmission that we have detected. We hope these efforts may tell us about the primitive immune system of these animals that we suppose may be actively limiting spread of the contagious clones.’ 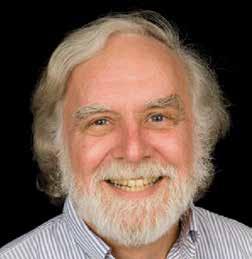 Professor Stephen Goff obtained his PhD from Stanford University in 1978, following which he pursued postdoctoral research at the Massachusetts Institute of Technology. He is currently Higgins Professor in the College of Physicians and Surgeons, Columbia University and an Investigator of the Howard Hughes Medical Institute. He has authored or co-authored in excess of 300 publications, is a member of the National Academy of Science, the National Academy of Medicine, and the American Academy of Arts and Sciences, and a fellow of the American Association for the Advancement of Science. He studies the life cycle of retroviruses, and the mechanisms by which they cause cancer. His most recent work has involved the study of transmissible cancers in shellfish.

Goff is presently working on intracellular virus trafficking together with Gregg Gundersen and Richard Vallee, colleagues at Columbia University, and Mojgan Naghavi and Derek Walsh at Northwestern University in Chicago. Goff maintains active collaborations with three of his former postdoctoral fellows now heading active laboratories of their own in Çhina: Guangxia Gao at the Institute of Biophysics at the Chinese Academy of Sciences in Beijing, Baojie Li at the Bio-X Institutes and Shanghai Jiao Tong University in Shanghai, and Yong Cang at Zhejiang University in Hangzhou. His recent work on transmissible cancers in molluscs has been a collaboration with Carol Reinisch, formerly at the Marine Biological Laboratory at Woods Hole, Massachusetts and James Sherry at Environment Canada, Water Science & Technology Directorate in Burlington, Ontario.