Some of the best ideas in science are ones that seem completely obvious – but only after someone else has thought them up. In the world of pipeline leak detection, Dr Bill Challener and his team at GE Global Research have dramatically extended the range of one of the most widely used methods, by bringing together technologies from across science and engineering, in a beautifully simple way.

Whether we like it or not, our world is still extremely dependent on fossil fuels. Our use of coal for energy dates back to 1000 B.C., but, when the industrial revolution began around 1740, the whole world began to shift away from small-scale biomass energy production in favour of the fossilised remains of million-year-old plants. Coal – in all its slate-grey splendour – burned bright around the world.

The following century brought with it a growing realisation that oil could also be exploited to produce useful energy. Our new-found infatuation with one of the blackest naturally occurring substances powered economies across the globe, signifying the beginning of an energy insurrection. 2016 saw the estimated global volume of oil reserves at 1,707 billion barrels. At £35 per barrel, that’s approximately £60 trillion worth of revenue in waiting: oil is big business.

Natural gas, a substance that the researchers at GE Global Research are very familiar with, was routinely used throughout the 19th century – predominantly as a light source in Britain and the USA. However, in 1885, the chemist Robert William Bunsen invented a device that would simultaneously change the subject of chemistry and the way we used natural gas forever.

The Usefulness of Natural Gas

If you have ever taken a high school chemistry class then you will probably be familiar with Robert William Bunsen. If not by name then, at least, by legacy: he was the inventor of the Bunsen burner. The Bunsen burner is a fundamental part of any chemistry teacher’s apparatus that produces a gas flame and is commonly used to heat chemical solutions and elements. Although Bunsen was focusing on a specific use for his burner – chemistry – it was soon realised that, by using similar technologies, we could extend the use of natural gas to a whole host of activities: from heating our homes and cooking our food, to new manufacturing processes and electricity generation.

Combined with the global increase in oil consumption, the increased range of uses for natural gas led to the creation of a vast network of pipelines capable of delivering oil and gas across countries, continents and seas. Today, natural gas generates just over 21% of the world’s electricity (second only to coal and oil) and, in the US alone, relies on over two million miles of underground pipework for transportation.

With such huge quantities of gas and oil flowing through the vast network of pipes that stretch throughout our world, the impact of a leak could be potentially devastating: for the environment, for the communities that the pipelines run through and for the companies that own them (see, for example, https://en.wikipedia.org/wiki/List_of_pipeline_accidents). It’s unsurprising, then, that a substantial amount of research has been dedicated to detecting when and where leaks occur. Available techniques range from acoustic pressure waves to the use of sniffer dogs – but a select few methods are used much more than others.

The pressure monitoring method is commonly used to detect leaks by continually checking the internal pressure of a pipe: if a sudden leak occurs then the pressure will drop suddenly, indicating that there is a problem. The mass balance approach uses the principle of the conservation of mass to detect leaks: if the mass of the gas exiting a pipe is less than the mass of the gas entering it, then gas must be being lost somewhere along the line. These two techniques are useful for relatively large leaks, of >1% of the volume of flowing gas. 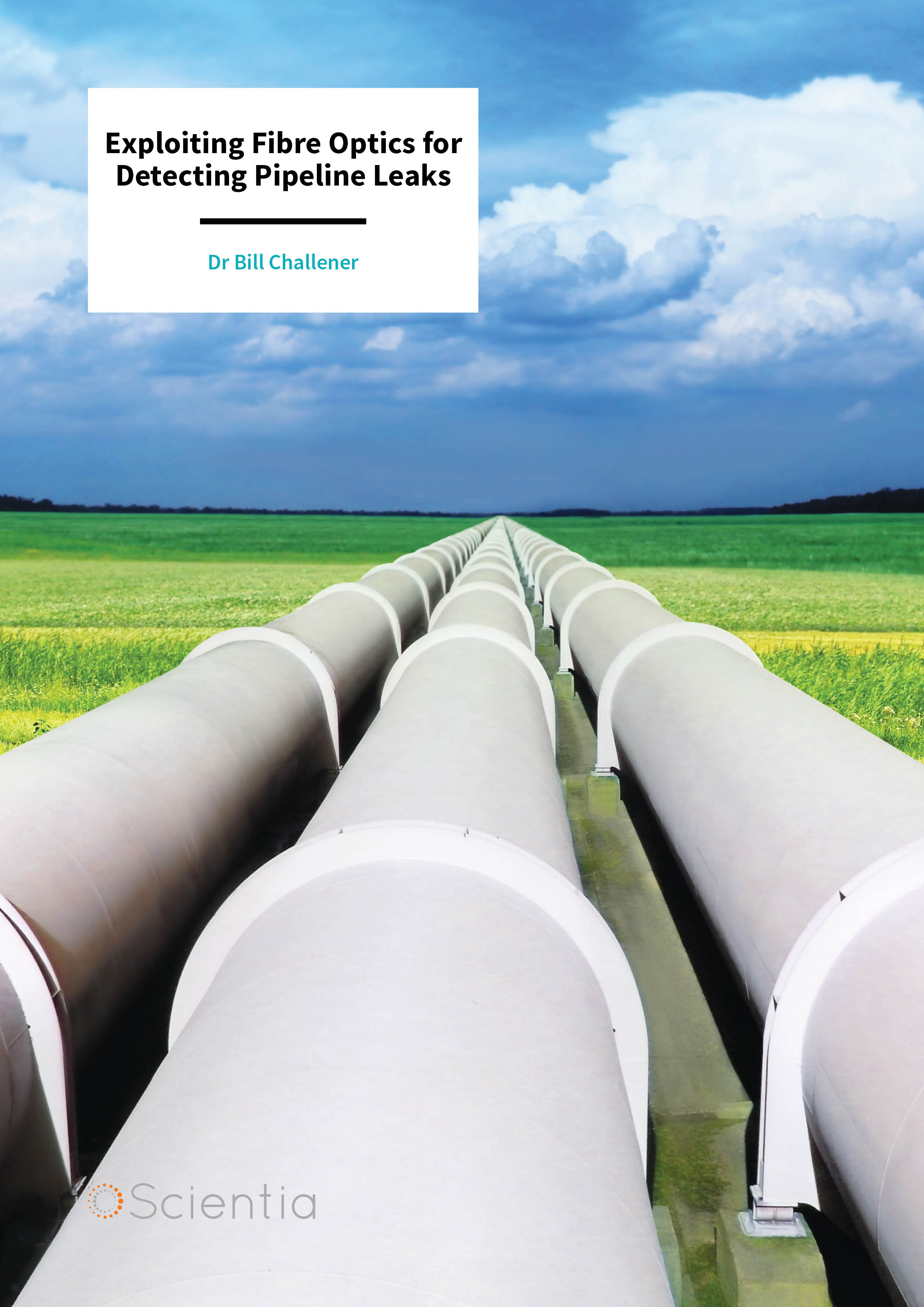 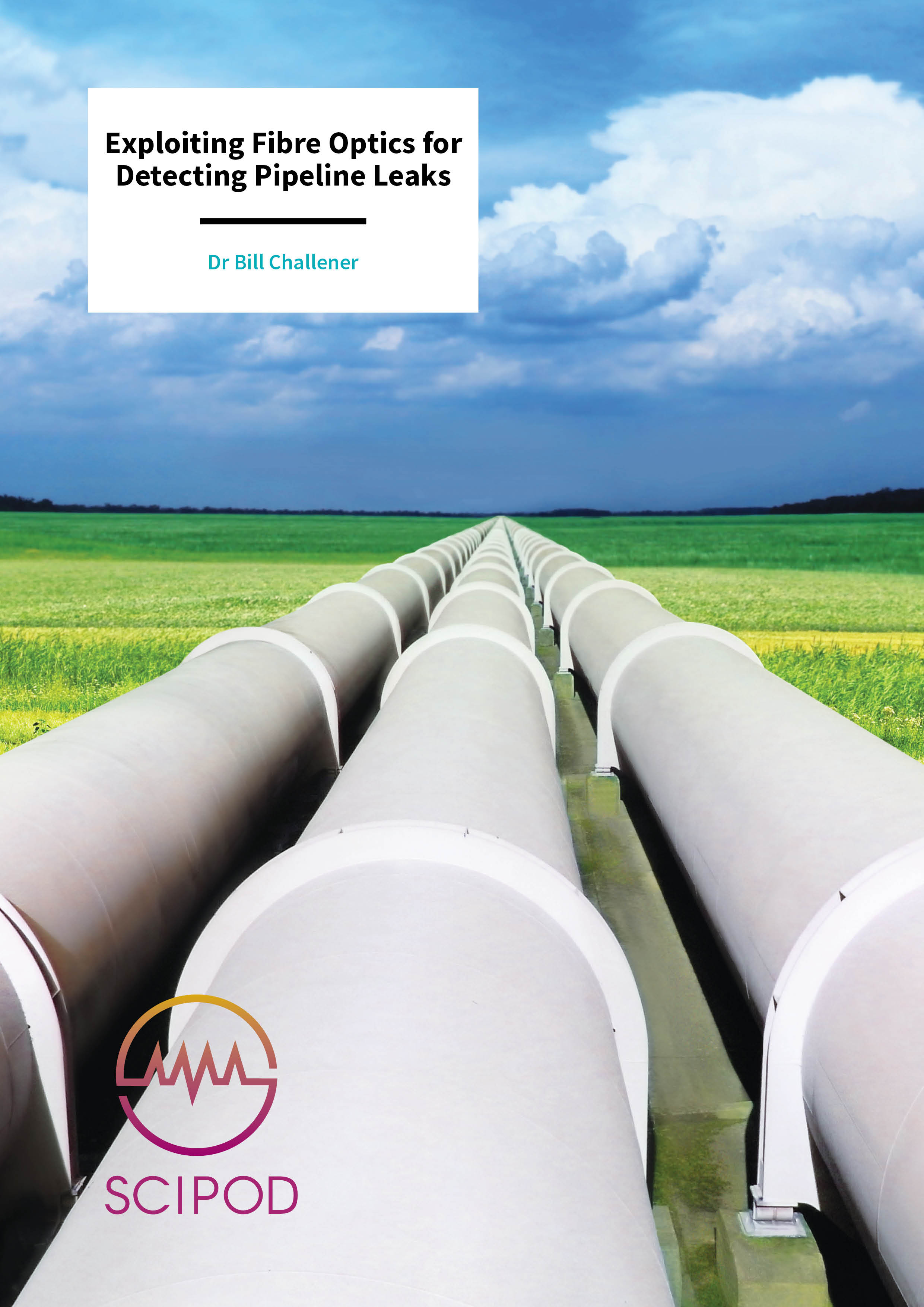 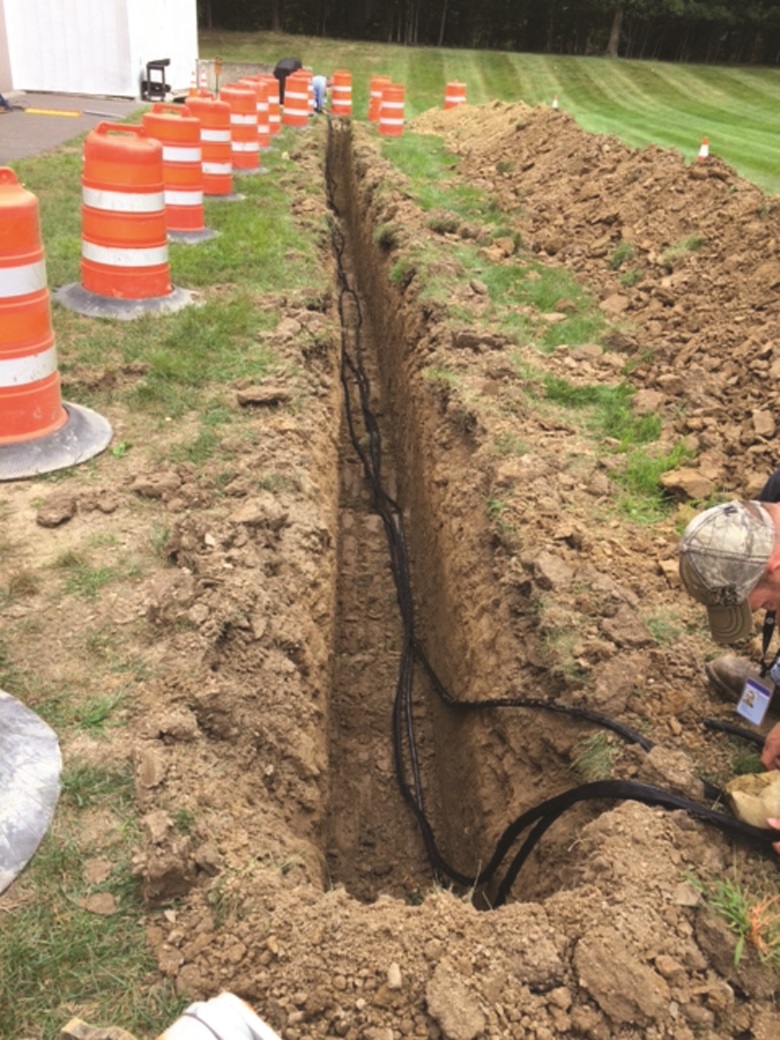 Vapour sensing tubes, on the other hand, are employed for detecting extremely small leaks, weeks before they can become hazardous. These are gas permeable tubes that are buried alongside the pipeline. They are kept full of air, and any leaking substance will diffuse through the gas permeable layer into the tube, which can be detected when the contents of the tube are pushed out to a sensor.

Developments in science often come with a caveat: a trade-off between requirements and capabilities. And, for the common techniques mentioned above, that trade-off is with time, sensitivity, range and localisation (the ability to tell where the leak occurs along the pipeline). Both the pressure monitoring and mass balance approaches can detect leaks very quickly, over a relatively large range, but are insensitive to small leaks. The vapour sensing method, on the other hand, can detect much smaller leaks, but is limited in range and takes a long time to provide useful information. Dr Bill Challener and his team at GE Global Research have found an ingenious way of extending the range and improving the speed of vapour-sensing tubes by using a simple optical technique that brings us back to Robert Bunsen.

Back to Bunsen: The Invention of Spectroscopy

If you were really lucky in high school, you got to see Bunsen’s invention in action by burning different elements – such as sodium (Na) or phosphorous (P) – and watching the flame of the Bunsen burner change colours. This simple experiment is one that Bunsen carried out himself in the late 1800s, to characterise the ‘emission spectrum’ of different elements.

In science, a spectrum is simply a continuous range of wavelengths of light – think about how white light is made up of all the colours of the rainbow, which vary continuously from red to violet. When Bunsen burned sodium, he observed that the light given off was a bright yellow colour: rather than being a continuous range, the spectrum of sodium manifests as two sharp yellow lines. Bunsen also observed that, when viewing sunlight through a sodium-flame, the opposite happened: the spectrum of the Sun appeared with two dark lines in place of the bright ones. Through his experiments, Bunsen had invented a technique for characterising materials based on their spectra – now known as spectroscopy.

Spectroscopy is still one of the most fundamental tools scientists have, although nowadays, they are more likely to use a laser than an open flame. The spectra of lasers are extremely narrow, and in certain cases tuneable, which makes them ideal for using in spectroscopy – if we know the wavelengths at which the dark absorption bands in a material’s spectrum occur. 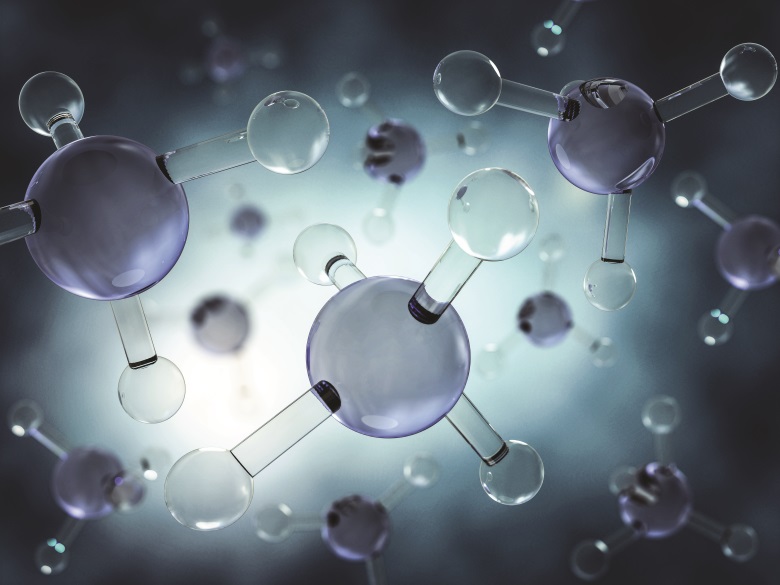 Advancing the State of the Art

The vapour sensing method is successfully used around the globe for detecting gas and oil leaks in pipelines up to 15 kilometres in length. In this method, the sensing tube is filled with clean air and left for a period of time (known as the soak period) where any leaking gas or vapour can diffuse into the pipe through the gas permeable cladding. As the sensing tube is closed to the environment, when a leak occurs and seeps into the tube, it will remain localised at the area where the leak is situated. The gas sensors are placed at the end of the tube and, when the air is pushed out (or purged), they will pick up any indication of a leak and, using simple mathematics, the location that it occurs at with an accuracy of around 50 metres for a 10-kilometre pipeline.

The team at GE Global Research realised that they could extend the range of the vapour sensing method by 10 times. In scientific circles, a technology that can improve the current methods by an order of magnitude like this is known as disruptive – it is expected to change the entire field in which it is deployed. The team’s approach works in a similar way to the standard vapour sensing method, except that they use laser spectroscopy combined with optical fibres to perform the gas sensing. Natural gas, for instance, has a well-defined absorption spectrum, with dark bands that are found at similar wavelengths as those used for telecommunications. This means that commercially available equipment can be used instead of developing everything from scratch.

Laser spectroscopy gives the GE technique a specificity that cuts down on cost, processing time and susceptibility to errors by honing in on the specific absorption bands of interest. In fact, by changing the laser source at one end of the pipeline, or employing a tuneable laser, the system could be used to detect many different gases or vapours. This makes the technology especially appealing for commercial use as the function of the sensing tube can be changed with minimal extra cost. 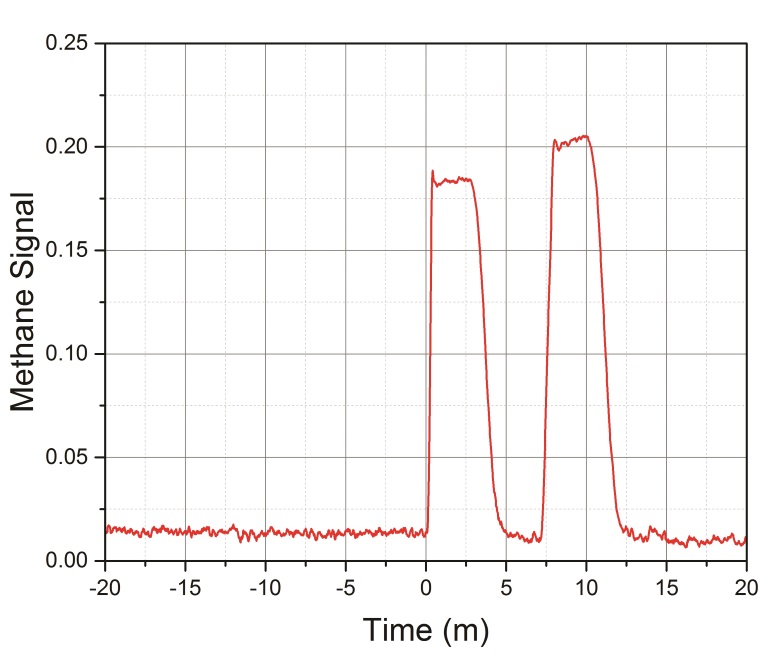 Using optical fibres in conjunction with laser spectroscopy is what allows the GE team to extend the range so dramatically – laying the fibre alongside the sensing tube means that the laser source can be placed at the beginning of the pipe instead of at the location where the sensing takes place. This simplifies the entire system by confining the power source to the pipeline pumping station and using the optical fibres to carry the laser light (which they do very well) to ‘sensing nodes’ sections along the sensor tube. The tube is soaked and purged in the same way as the standard method and the optical information describing whether a leak has occurred is carried back along a separate optical fibre for processing. The range of the technology is now limited by how far the fibres can carry optical information before it starts to degrade.

The system uses optical fibre technology in a second manner as well. The optical ‘cell’, through which the laser light passes in order to detect a potential gas leak, is composed of novel ‘hollow core’ fibre developed for different wavelengths by teams at OFS Fitel and the University of Bath. The conventional telecom solid core fibre carries the laser light to and from the sensor node, where the light is focused into a short segment of hollow core fibre. During the purge cycle, the small overpressure in the sensing tube is sufficient to push a small fraction of the gas in the tube into the hollow core fibre, thereby enabling spectroscopic detection of any leaking methane.

The beauty of the GE approach lies in its simplicity and effectiveness, allowing much larger stretches of pipeline to be monitored at multiple points using a single remote interrogation station, thereby minimising investment and the need for electrical power and communications at each sensing node. Once rolled out, this technology may extend the power of the sensor tube approach to much longer pipelines, enabling earlier leak detection and helping to mitigate their devastating impacts on the environment and communities across the globe. 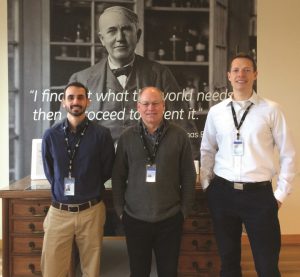 Dr William (Bill) Challener is a project leader at GE Global Research – the research and development division of General Electric. He completed his undergraduate degree in physics at the Massachusetts Institute of Technology before going on to obtain his PhD at the University of California, Berkeley. He has been working in the field of physics since 1983. His extensive experience encompasses industrial research and project management in the field of optics and has led to numerous awards and honours: he was presented with the Seagate Outstanding Technical Innovation Award in 2003; given the Information Storage Industry Consortium Technical Achievement Award in 2007 and became a fellow of the American Physical Society in 2013 (to name just a few). He has acted as principal investigator for a number of federally funded projects and has invented numerous methods and techniques.

The information, data, or work presented herein was funded in part by the Advanced Research Projects Agency-Energy (ARPA-E) MONITOR Program, US Department of Energy, under Award Number DE-AR0000543. The views and opinions of the authors expressed herein do not necessarily state or reflect those of the United States Government or any agency thereof. This work was also partially funded through the GE Oil and Gas Technology Center, part of Baker Hughes, a GE Company.