Many plants contain phytochemicals – unique chemicals that can prevent diseases such as heart disease, cancer and obesity. Dr C. B. Rajashekar and his colleagues at Kansas State University are investigating ways to increase the concentration of these constituents in common vegetables, without adversely affecting normal growth and yield. The key lies in subjecting them to mild environmental stresses.

Increasing the Concentration of Phytochemicals in Common Vegetables

Phytochemicals are a large group of biologically active agents found in plants. Often, they have a therapeutic capacity, working as anticarcinogenics, antimutagenics, anti-inflammatory agents, and antioxidants. Therefore, they are associated with numerous health benefits. Phytochemicals play an important role in prevention of many chronic diseases such as heart disease, cancer and obesity. Common fruits and vegetables are often quite rich in phytochemicals. As such, many health organisations and doctors recommend that fruits and vegetables should be a major component of people’s daily diet.

Because of the inherent health benefits of fruits and vegetables, many scientists have been attempting to improve their nutritional quality further. One approach is to stimulate enhanced production of health-promoting phytochemicals within the plant. Dr C. B. Rajashekar, Professor of Food Crops and Phytochemicals at Kansas State University’s Department of Horticulture is investigating the use of certain environmental and crop management techniques to do exactly that – without damaging the overall quality, yield and growth characteristics. Specifically, his team investigates the ability of mild environmental stresses to encourage phytochemical production.

His approach exploits the natural response of many living organisms to stress. ‘In response to stresses, and more importantly, as an adaptive mechanism, plants tend to shift toward secondary metabolism resulting in the accumulation of protective antioxidants,’ explained Dr Rajashekar and his colleagues in a paper of 2009. Their research essentially involves the manipulation of this effect, as applied to commonly consumed vegetables such as lettuce, spinach, pac-choi and tomato and sprouts. Dr Rajashekar aims to use this information to improve the quality of produce and farming practices which will, in turn, lead to better health outcomes for global citizens.

‘For a long time, people in crop science, both in agronomy and in horticulture, have focused on increasing the crop yields, but quality has always been the secondary objective. What we are trying to do is actually use mild stress on the plants to make them produce more of these antioxidants and phytochemicals, and thereby improve their nutritional quality.’

Lettuce is a very popular and widely consumed vegetable. It ranks high both in production and economic value in many countries, especially the United States. As is the case with many plants, lettuce produces phytochemicals in response to environmental stress, as a defence mechanism. Specifically, lettuce is high in antioxidants, which play an important role in combating the adverse cell responses that lead to many diseases. Lettuce is also high in a chemical known as ‘L-chicoric acid’ – a potent inhibitor of human immunodeficiency virus (HIV) integrase, which is needed for the replication of the virus. 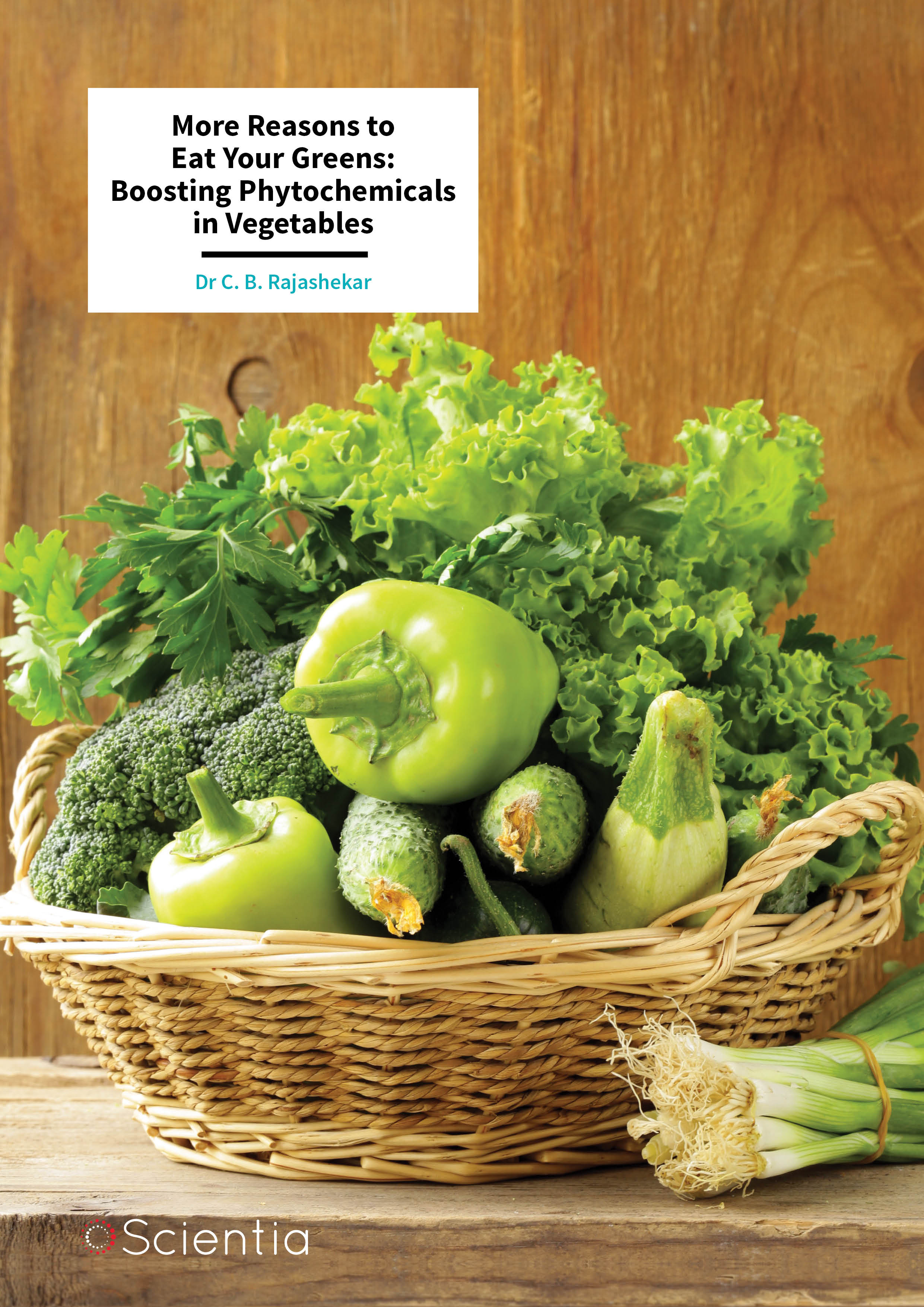 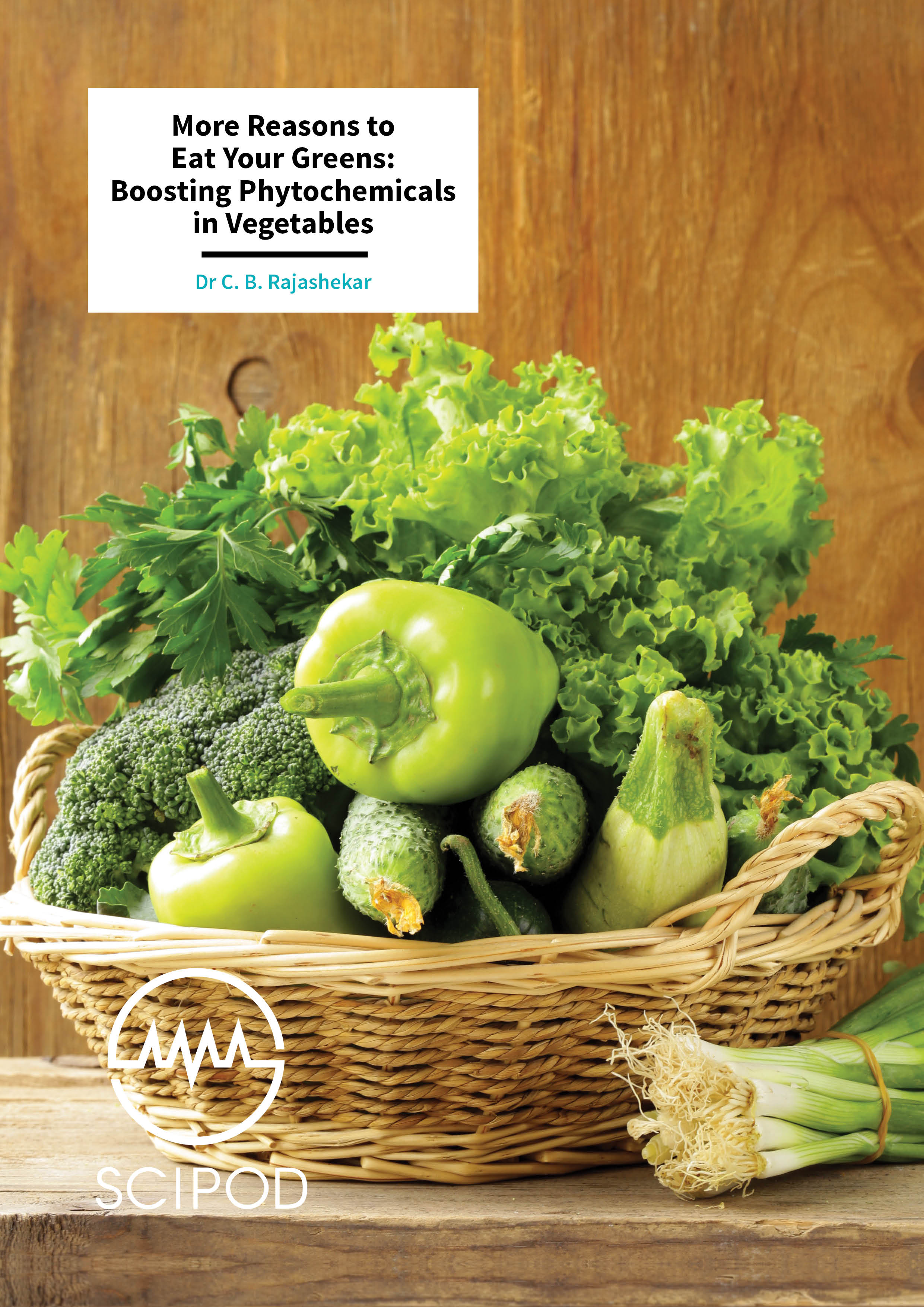 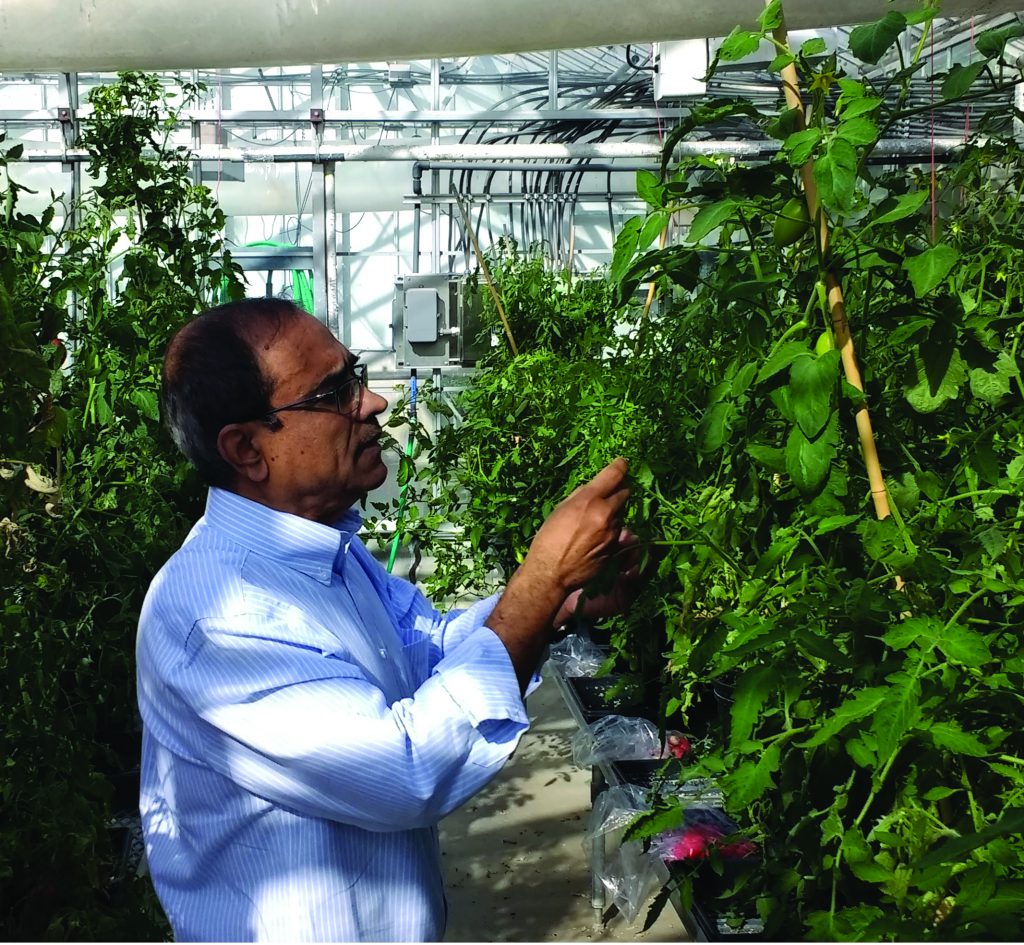 Dr Rajashekar and his colleagues wanted to enhance the production of phytochemicals in lettuce by subjecting it to certain mild environmental stresses. The stresses applied included mild heat shock, chilling, and high light intensities. After applying these stresses, the team found that there was a significant increase in the concentrations of many phytochemicals. Because of these higher concentrations, the team also measured a large increase in the lettuce’s antioxidant capacity – the ability to deactivate disease causing chemicals such as free radicals in humans. The team achieved this effect without causing damage to the plant or negatively affecting yield. In particular, they found that periods of exposure to intense light were quite effective.

Dr Rajashekar and his team are further investigating the impact of the quality of light (including UV) on the accumulation of health-promoting phytochemicals in lettuce and tomato. Using LEDs, they found that specific colours of visible light and UV-A are essential for the production of many phytochemicals in leafy vegetables. As a next step to boost the nutritional quality of these crops in the field, the team is involved in studies to evaluate and select polycovers (polyethylene films) that would allow the appropriate quality of sunlight through in high tunnel productions of these crops.

In 2010, Dr Rajashekar and his team again visited the idea of inducing enhanced phytochemical production in lettuce using mild environmental stresses. This time, however, they would investigate the effect of specific growth conditions and crop management practices.

First, they applied stress in the form of scheduled water deficits. In another experiment, they applied stress by altering the location, or growing conditions, of the lettuce plants. For example, the team moved the lettuce plants to an open field and monitored the effects of that change. These two experiments showed that, by withholding water and causing water stress on lettuce plants, and by changing the plants’ growing conditions, the concentration of antioxidants in lettuce could indeed be increased. And again, these stresses did not adversely affect physical plant growth and yield.

In addition, the team studied the effect of crop fertilisation, especially involving nitrogen on the quality of leafy vegetables. They found that excessive nitrogen can actually impede the accumulation of many phytochemicals in lettuce and other leafy vegetables.

In recent years, increasing numbers of fruit and vegetable crops are being grown in protected environments such as high tunnels covered with polyethylene sheets, which can alter the sunlight received by these crops. High tunnels are quite popular because growers can expect higher crop yield and extended growing season using these structures. However, Dr Rajashekar and his colleagues have found that high tunnels, despite their popularity, may actually lower the nutritional quality of crops because they alter the light quality that the crops receive.

In 2012, Dr Rajashekar then turned his attention to the use of organic farming practices, and their ability to increase the concentration of health-promoting constituents in lettuce. His team’s focus was on a compound known as ‘L-chicoric acid’ – a chemical used in the fight against AIDS, as it can reduce the replication of the HIV virus. They found that the concentration of L-chicoric acid in lettuce grown using organic farming strategies increased nearly 2-fold compared with lettuce grown using more conventional farming practices.

Clearly, growing conditions play a huge role in improving the health benefits associated with many vegetables and their capacity to fight disease. The insights that Dr Rajashekar’s team has gathered are bound to improve current crop management practices.

Just like lettuce, sprouts of alfalfa, broccoli and radish are high in phytochemicals and have a significant antioxidant capacity. Due to this characteristic, according to Dr Rajashekar’s research, they can help to decrease the incidence of chronic and degenerative diseases and cancer. However, the phytochemical concentration of these types of sprouts decreases sharply with age. Therefore, their health benefits may significantly decrease by the time they reach consumers. On the other hand, young sprouts, which have a higher nutritional content, are often not robust enough to cope with early harvesting.

For these reasons, sprouts were deemed to be the perfect candidate for applying the method that had been developed. Perhaps the research team could again use mild environmental stresses to increase the phytochemical concentrations of sprouts and ensure that they are maintained for longer periods of time.

The team’s study proved that environmental stresses can be successfully used to enhance the health-promoting qualities of sprouts. Furthermore, given the ease with which the effect can be induced, it would be relatively simple to adopt by sprout growers.

Effect of Increasing Carbon Dioxide on Lettuce and Spinach

Recently, Dr Rajashekar and his team have been focusing on the potential effects of rising atmospheric carbon dioxide levels on plant growth, productivity and nutritional quality. Specifically, in research from 2016, the team examined the impact of elevated carbon dioxide levels on lettuce and spinach. They found that elevated carbon dioxide decreases the concentration of a number of key nutrients. ‘It decreases the concentration of nitrogen (protein), phosphorus and potassium along with many important micronutrients including copper, zinc, magnesium and sulphur in either lettuce, spinach or both,’ the team stated in their study.

This is rather dire considering that global carbon dioxide levels are on the rise due to fossil fuel combustion and widespread deforestation. Incidentally, however, subjecting lettuce to elevated carbon dioxide levels increased the concentration of some phytochemicals. It appeared that, in this case, ensuring the health-promoting qualities of certain vegetables would be a balancing act between retaining protein and essential mineral nutrient content and producing important phytochemicals. 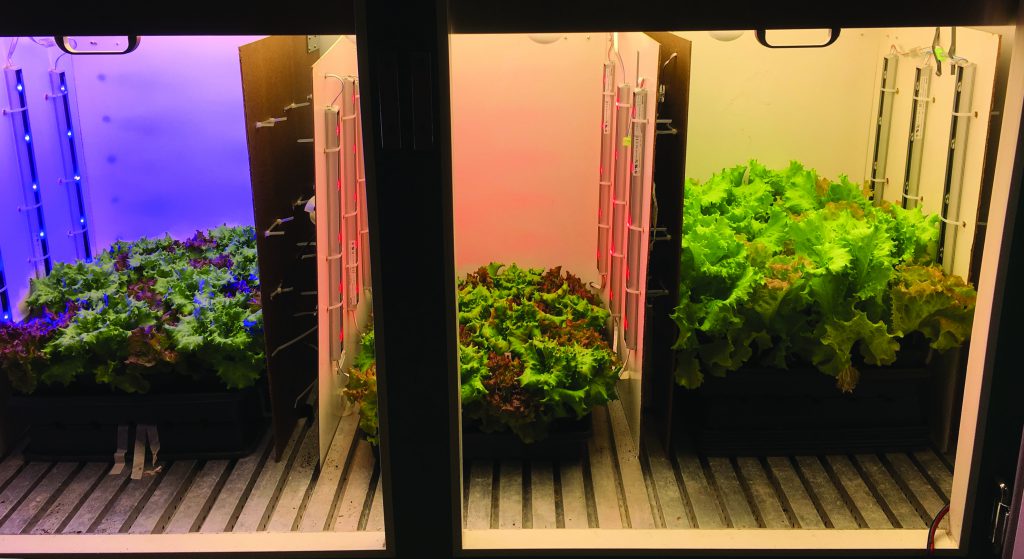 In a paper of 2018, Dr Rajashekar further investigated this conundrum. His team highlighted that increased carbon dioxide does indeed have a positive effect on plant growth and yield. It can improve drought resistance and water efficiency. Furthermore, it can increase carbohydrate accumulation, which again, stimulates the production of certain phytochemicals. Not only are these chemicals beneficial to humans, they can also fortify a plant’s defence strategy against pathogens and herbivory – leading to better crop yields. On the other hand, the team found that elevated carbon dioxide levels lead to the suppression of other nutrients, which could, in turn, result in widespread malnutrition. This presents a real challenge for future fruit and vegetable production, especially given recent developments in terms of climate.

In summary, Dr Rajashekar’s work has demonstrated the positive effect of mild environmental stresses on the production of health-promoting constituents in certain vegetables. Specifically, exposure to high and low temperatures, water stress and high light intensities, and adopting appropriate crop management practices (such as planting in open fields and using organic farming strategies), may lead to positive results in this regard. Therefore, as the environment and economy undergo significant change, the work of Dr Rajashekar will no doubt result in better crop management practices to ensure that global citizens have access to more nutritious food in the future. 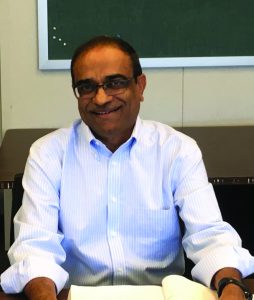 Dr C. B. Rajashekar received his PhD from Colorado State University, where his research focused on plant responses to environmental stresses and tolerance mechanisms. After completing his PhD, he took a postgraduate position at the University of Minnesota, where he again studied the effect of environmental stresses on plants and their adaptive capabilities. In 1989, he joined the Department of Horticulture at Kansas State University, firstly as an Assistant Professor, later working his way up to full Professor of Food Crops and Phytochemicals. His recent research has focused on how mild environmental stresses and altered farming practices can be used to increase plant phytochemical production and enhance the health-promoting qualities of common fruits and vegetables. He is also investigating the effects of carbon dioxide on plant nutritional content.

Many aspects of this research were supported by grants from United States Department of Agriculture (USDA), NIFA, USDA Integrated Organic Program and Kansas State Research and Extension.

MM Oh and CB Rajashekar, Antioxidant Content of Edible Sprouts: Effects of Environmental Shocks, Journal of the Science of Food and Agriculture, 2009, 89, 13.