The Moon’s poles are enriched in hydrogen, a key component of water-ice, but there’s still much to learn. Dr Craig Hardgrove and his colleagues at Arizona State University are leading the Lunar Polar Hydrogen Mapper (LunaH-Map) mission, which aims to discover how much water-ice is hidden in the permanently shadowed regions of the Moon.

Although the presence of water-ice on the Moon was known to be theoretically possible, the impact of its actual discovery in 2009 still shocked many scientists. This revelation suggested that the origins and evolution of hydrogen in our solar system – an essential ingredient in water – were not understood, and existing spacecraft did not have the technology to resolve the conundrum.

In earlier space probes, devices that detect neutrons – uncharged subatomic particles found in most atoms – were used to reveal the existence of water-ice on the Moon. Galactic cosmic rays (high-energy protons) constantly bombard the Moon, and this process generates high-energy neutrons. As they pass through the upper metre of the Moon’s surface, some of these neutrons interact with hydrogen atoms, and emerge from the Moon’s surface with a characteristic energy that can be measured. Therefore, a higher concentration of neutrons with this specific energy (termed ‘epithermal’) tells scientists that hydrogen is present.

Several neutron detectors have shown that hydrogen atoms, bound to either hydroxyl ions (OH−) or water molecules (H2O), are more concentrated at the poles. However, up until now, existing space probes have not had the spatial resolution to resolve the small-scale areas of the south pole, where higher levels of hydrogen-bearing materials have previously been found. Previous missions were not able to unambiguously point to regions of the lunar south pole where ice was enriched, where we might want to direct future landers or missions towards exploring.

To solve this problem, a spacecraft would be needed that could fly low over the lunar south pole and detect neutrons over a region with a footprint of about fifteen square kilometres. Dr Craig Hardgrove was chosen to be the head of a team who would design such a spacecraft. The lunar south pole, inside the Shackleton Crater, was selected as the target.

‘The people who work on this believe in it. They believe it’s something that should happen. They believe there will be more of these tiny spacecraft in the future and that this is a new model of exploration for NASA.’

Dr Hardgrove and his team of colleagues and students at Arizona State University are leading the Lunar Polar Hydrogen Mapper (LunaH-Map) mission, which aims to probe these elusive polar regions. For this mission, the team decided to use a new type of neutron detector material, called an ‘elpasolite scintillator’, that is equally as efficient as previous neutron spectrometers and fits more readily in the team’s new type of (tiny) spacecraft. The detector has been designed to be sensitive to neutrons with energies that best indicate an abundance of hydrogen. 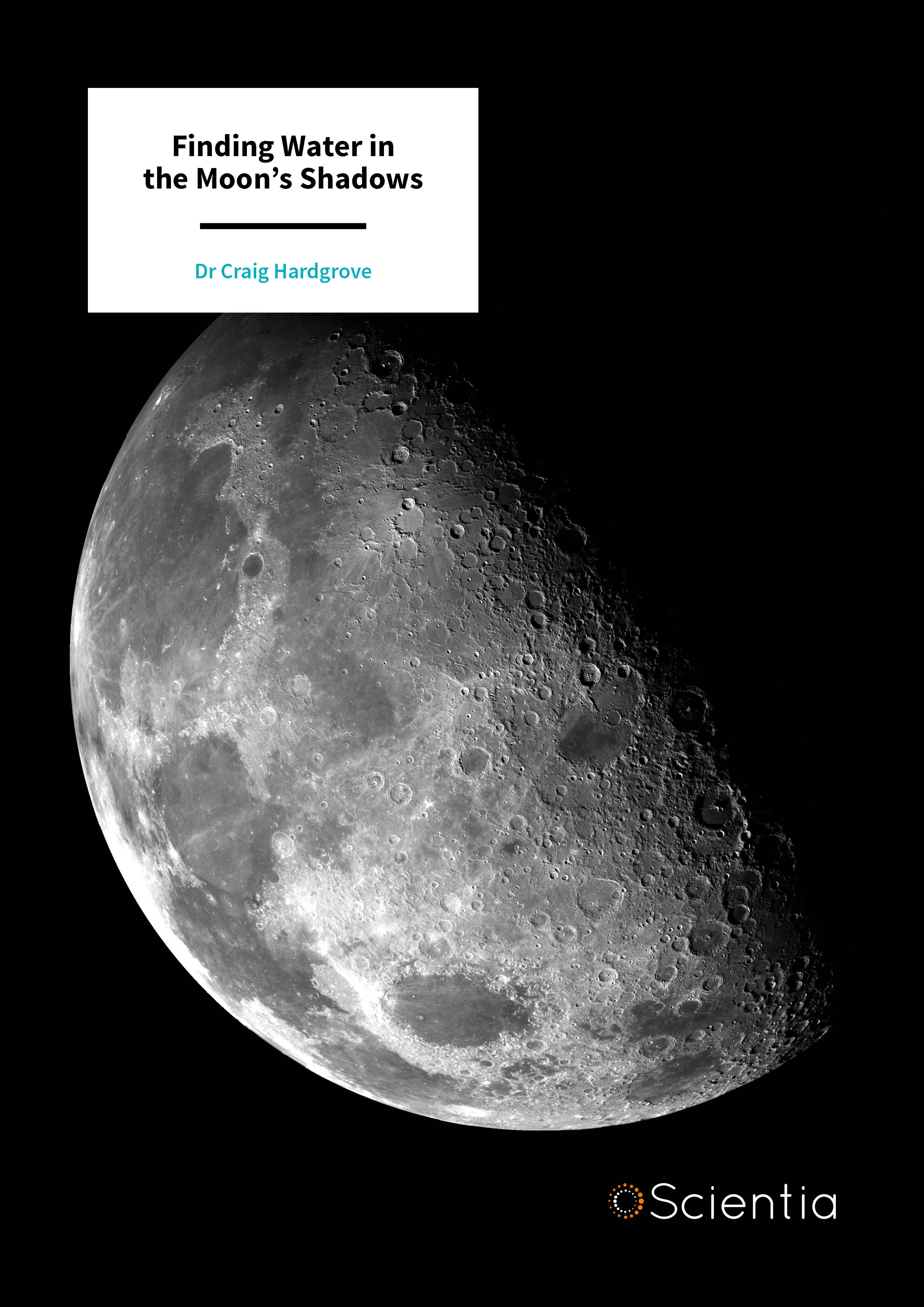 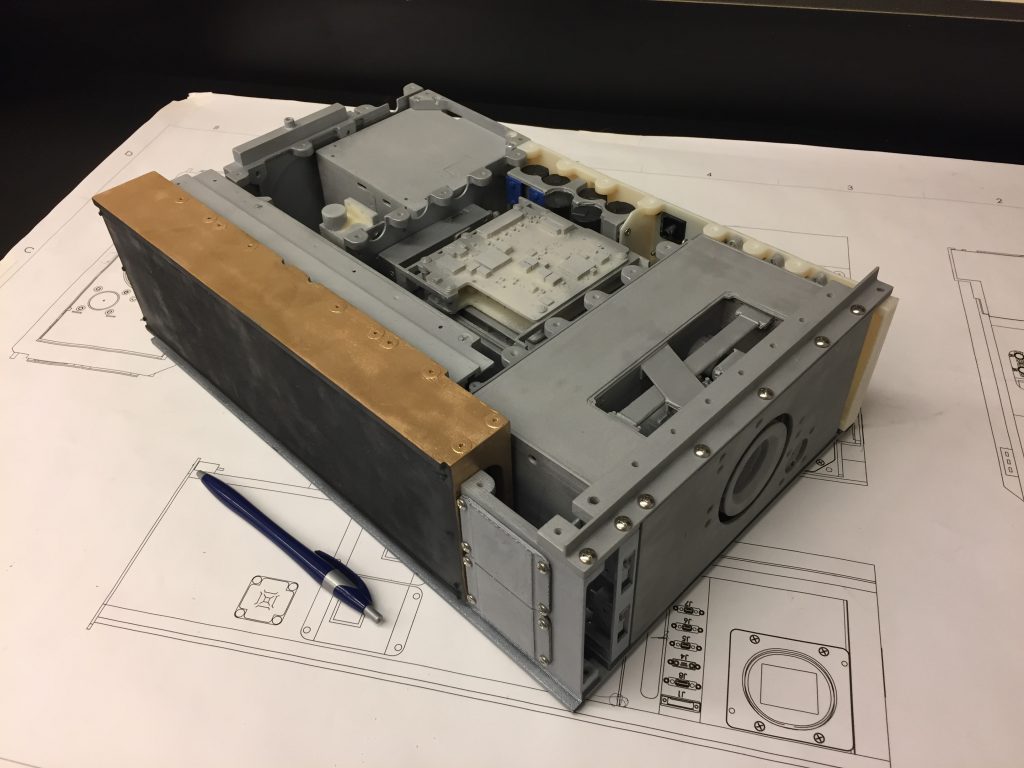 How Did Water Arrive?

Why water should exist on the lunar surface is not well understood, although experts have offered explanations on how it was produced and distributed to the poles. If scientists could understand how and why water is enriched at the Moon’s poles they might discover it in similar regions elsewhere in the Solar System.

One way that hydrogen might have arrived is through the solar wind – the constant stream of charged particles emanating from the Sun. Earth’s magnetic field thankfully deflects these high-energy particles, but the Moon’s negligible magnetic field can’t offer much protection. In this way, charged hydrogen atoms in the solar wind could react with oxygen in Moon rocks to form hydroxyl ions and possibly water, which could then migrate to the poles due to impacts, becoming trapped and eventually forming ice.

Furthermore, impacts from objects such as comets and wet asteroids might have delivered water to the Moon. Outgassing from within the moon, evidenced by its fresh, unusual surfaces, could also be a source of water. Curiously, more recent missions have revealed that the poles of Mercury are enriched in water-ice but at much higher levels than the Moon. This is yet another mystery that a better understanding of the distribution and abundance of hydrogen within the lunar poles will help scientists address.

By measuring the concentrations of hydrogen at and around the lunar south pole, Dr Hardgrove and his team will help us to understand where this water might have come from. If they find that hydrogen exists in sufficient concentrations, this could have implications for how water was delivered to the inner solar system, and could point to regions for future human exploration missions to the Moon for life support and producing hydrogen fuel. In this way, the Moon could be used as a refuelling station for astronauts on their way to Mars or the moons of Jupiter. 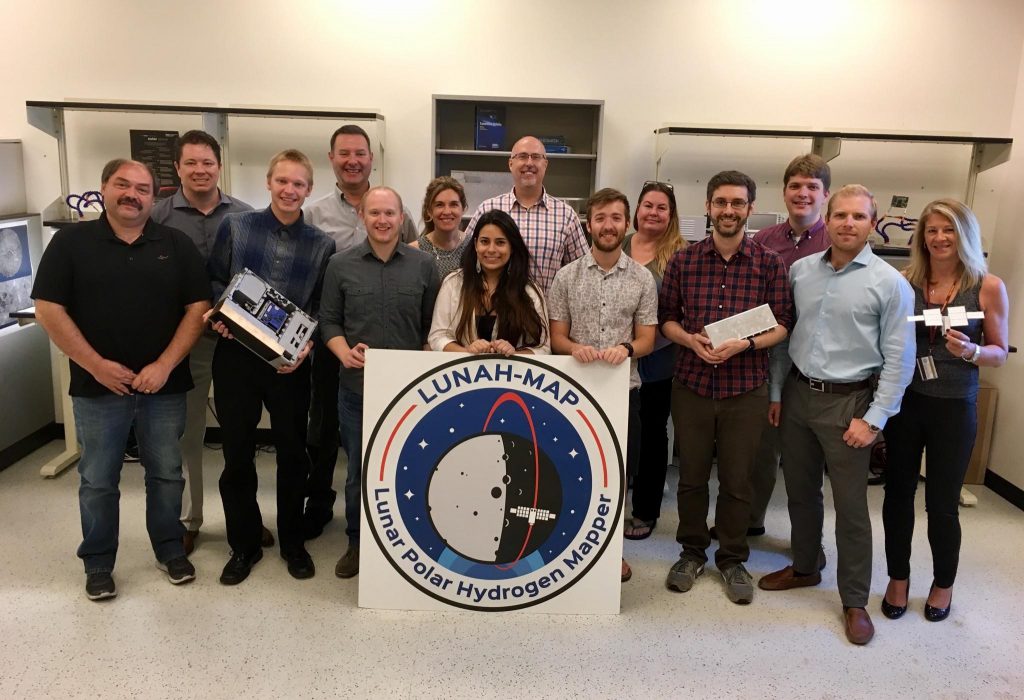 Dr Hardgrove was appointed Principle Investigator in late 2015 for the innovative LunaH-Map mission, scheduled for the maiden launch of NASA’s new Space Launch System (SLS) Exploration Mission 1 (EM-1). This is the first planetary science mission designed, built and operated by Arizona State University, and LunaH-Map is billed as a high-risk but high-reward mission. The spacecraft itself is constructed from six ‘cube-satellites’ (6U, denoting six units) joined together, each having sides of just ten centimetres in length. On top of this, the entire 6U spacecraft has a maximum allowable mass of 14 kg – another challenging constraint for the designers.

Into this tiny space – roughly the volume of a shoebox – the team will cram two neutron detectors, directional ion thrusters to allow the spacecraft to be steered, iodine fuel, communication devices, electronics, power supplies and batteries, along with large external solar panels to capture energy from the Sun.

The neutron detectors will be shielded with a rare-earth metal called gadolinium. This will filter out low-energy neutrons, making the device more sensitive to the presence of hydrogen (and avoid complicating factors from other elements that absorb neutrons), especially hydrogen present in the top metre of the Moon’s surface. Indeed, the team’s neutron detectors are large relative to the spacecraft size, taking up about 200 square-centimetres of surface area, making them more sensitive than those used in any previous planetary science mission. 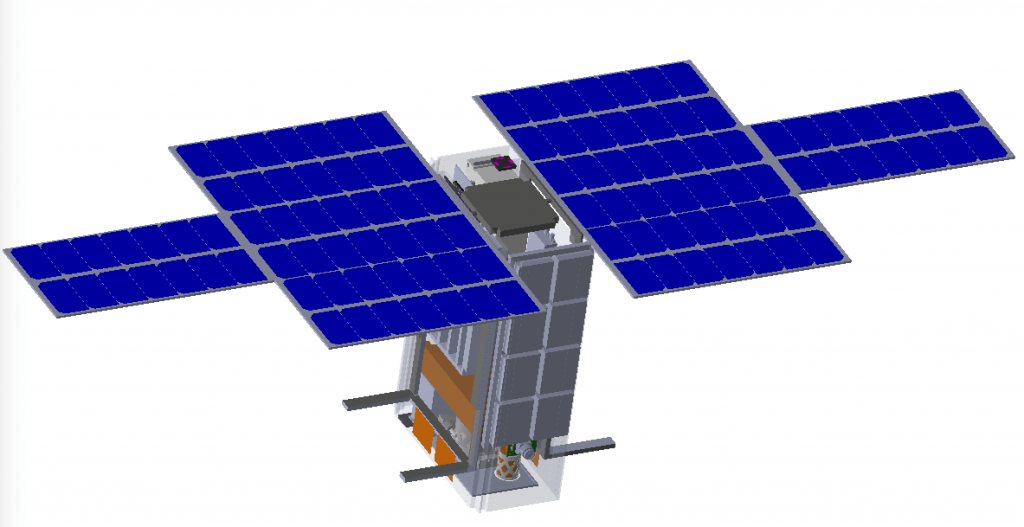 The team’s mission will complete several pieces of a jigsaw, answering questions about the distribution and quantities of lunar water. If successful, it will significantly add to our knowledge of how water formed and evolved at the poles, and will help future missions that wish to exploit lunar water.

Upon deployment from SLS, LunaH-Map will use its iodine-ion-thrusters to position itself, to achieve a highly elliptical orbit with the closest point to the moon over the south pole at a height of 15 kilometres.

Achieving this semi-frozen elliptical orbit, so that the science can begin, will take some time, given the limitations of the ion thrusters. It will take up to 70 days for the spacecraft to be weakly captured by the moon’s gravity. Then, in around 470 days, LunaH-Map will achieve an elliptical orbit. At its farthest point in this orbit, the spacecraft will be 3,150 kilometres from the lunar surface (above the north pole), while its nearest point will be 15 kilometres (above the south pole).

Once this has been achieved, there will be a two-month science phase when neutron measurements will be made as the spacecraft flies by the south pole during each orbit. During this time, the spacecraft will map the distribution and quantity of hydrogen, as a proxy for water, within the permanently shadowed craters of the lunar south pole. It will also measure the availability of hydrogen within the top meter of the lunar surface, and assess whether this coverage is evenly distributed. During its scientific orbits, the spacecraft will cover the whole south pole region, including permanently shadowed areas around the target Shackleton crater.

Data will be stored in time ‘bins’, with a higher collection frequency as it flies over the south pole, which will be analysed on-board and prioritised for transmission back to Dr Hardgrove and the science team.

Finally, after the science data have been transmitted back to Earth and most of the fuel reserves consumed, LunaH-Map will crash into the lunar South Pole, perhaps within one of the permanently shadowed regions. 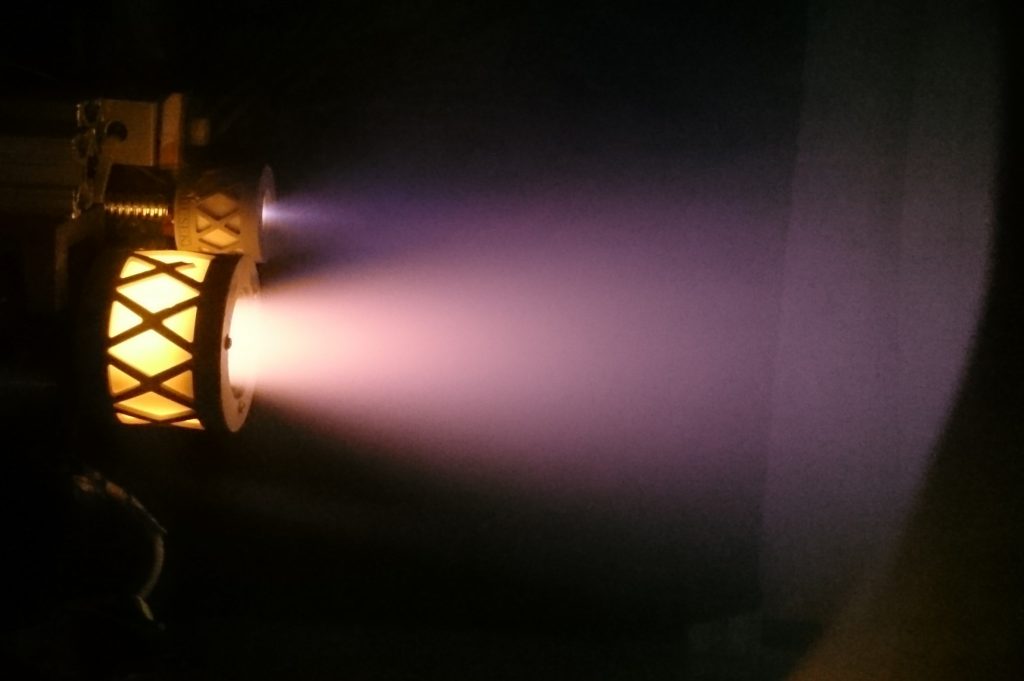 LunaH-Map’s neutron detectors will map the distribution of hydrogen within the south pole region of the Moon. When neutrons of the correct energy are detected, Dr Hardgrove and his team will know that hydrogen is present, and that means the presence of water.

Within the chosen flight path, the south pole being the closest point, the entire polar region will be examined. The spacecraft will gather data for several craters, including Shackleton, de Gerlache, Haworth, Sverdup, Faustini, Shoemaker, Nobile, Cabeus, Amundsen and Mean. Shackleton will be passed over in nearly all orbits, whilst Haworth and other craters will achieve only several passes due to the precession of LunaH-Map’s orbit. 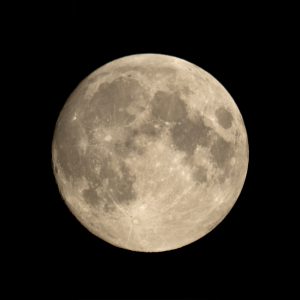 LunaH-Map will only measure neutrons that have interacted with hydrogen atoms, those with energies that fall within a certain range, as it passes over the lunar south pole. These measurements will be stored every few seconds, with each individual reading covering a square kilometre area of less than 10 kilometres. To calibrate these polar readings, the spacecraft will take measurements at the equator at a lower collection rate of about one hour per measurement. Using all of these data, the team will produce hydrogen abundance maps for an area of the south pole, 90 to −85 degrees south, with each data point representing 15 square kilometres or less.

The next objective is to understand the concentration of hydrogen within a depth of 1 metre at the south pole. Dr Hardgrove’s design allows the measurements taken by LunaH-Map as it passes over the poles to achieve this objective, because LunaH-Map’s neutron detectors are extremely sensitive. Using the data collected, the team will create hydrogen maps at a scale of around the width of an average crater, or just like their abundance maps, around 15 square kilometres per data point.

No Pain, No Gain

Dr Hardgrove and his team have impressive goals and are combining the experience of the commercial small-satellite industry with the expertise and resources available at Arizona State University’s School of Earth and Space Exploration. LunaH-Map’s high-risk, high-reward mission stands to make significant and meaningful contributions to lunar science, and future space exploration. 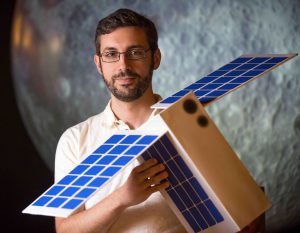 Dr Craig Hardgrove received his PhD in Geology from the University of Tennessee in 2011 and is currently an Assistant Professor in the School of Earth and Space Exploration at Arizona State University. He is the Principal Investigator of the LunaH-Map mission, the first planetary science mission designed, built and operated by Arizona State University. He is also a Participating Scientist on the Mars Science Laboratory Curiosity Rover Dynamic Albedo of Neutrons (DAN) team and Principal Investigator of SINGR (Single Scintillator Neutron and Gamma-Ray Spectrometer) instrument development project. In addition, Dr Hardgrove has worked on many Mars rover and orbiter missions, including MER Spirit and Opportunity, MSL Curiosity, Mars Reconnaissance Orbiter-CTX, Mars-2020 Mastcam-Z. His research interests include planetary geochemistry, and the use of infrared remote sensing on planetary surfaces to understand sedimentary processes.