Dr Darren Higgins and his team at Harvard Medical School use a multidisciplinary approach to investigate the mechanisms involved in the growth and spread of disease-causing bacteria that invade human cells. The team is developing new therapies to combat these life-threatening diseases.

The human body is a very restrictive host – with help from its immune system and protective barriers, it fends off attacks from an array of pathogenic or disease-causing bacteria. However, in some circumstances, certain bacteria are able to evade these defences and enter host tissues to cause serious illnesses such as meningitis, encephalitis, respiratory and diarrheal diseases. With millions of people affected worldwide, there is a clear necessity to further understand the interactions between these bacteria and their human hosts.

Since completing his graduate studies into the disease processes of the bacterium that causes cholera, Vibrio cholerae, Dr Higgins has spent over two decades pursuing research in intracellular bacterial pathogenesis, specifically how disease-causing bacteria invade cells, replicate and spread. He describes that, ‘understanding the mechanisms that these bacteria use to get inside of cells, replicate and spread is leading directly to the development of new therapeutic treatments and the development of new preventative measures such as vaccines.’

With this in mind, Dr Higgins and his colleagues are not only attempting to characterise the host-specific factors involved in the development of infections within cells but are also searching for proteins within bacteria that determine their virulence – how well the pathogen infects its host. They also hope to identify how bacteria control the process of infection and how the immune system recognises bacteria to stimulate an immune response.

Dr Higgins is a Professor of Microbiology and Immunobiology at Harvard Medical School, where his research team has focused on understanding the mechanisms these disease-causing bacteria use to survive, grow and spread inside the human cell. ‘Building upon extensive expertise in the areas of microbial pathogenesis, immunology, and the cell biology of infection, our group has pioneered multiple approaches and made significant contributions to understanding the mechanisms of intracellular bacterial pathogenesis and the host immune response to infection,’ he explains.

The team decided to focus some of their studies on the well-characterised bacterium Listeria monocytogenes, hoping that the information gleaned could be translated to other species. Listeria monocytogenes is a food-borne, intracellular bacterial pathogen capable of invading numerous host cell types and causing severe diseases in people, particularly affecting those whose immune systems are compromised, such as the elderly and pregnant women. Of greatest concern is its ability to invade the brain and cause life-threatening meningitis and encephalitis. Dr Higgins’ laboratory is currently focused on attempting to ascertain how these bacteria enter the brain with potentially fatal consequences.

Internalisation of the Bacteria

When a bacterial pathogen enters the body, phagocytic cells, a type of cell that forms part of the immune system, engulfs the foreign pathogen and traps it in a vacuole – a specialised compartment within the cell. The phagocytic cell then destroys it ensuring the bacteria do not have access to the host’s internal tissues. 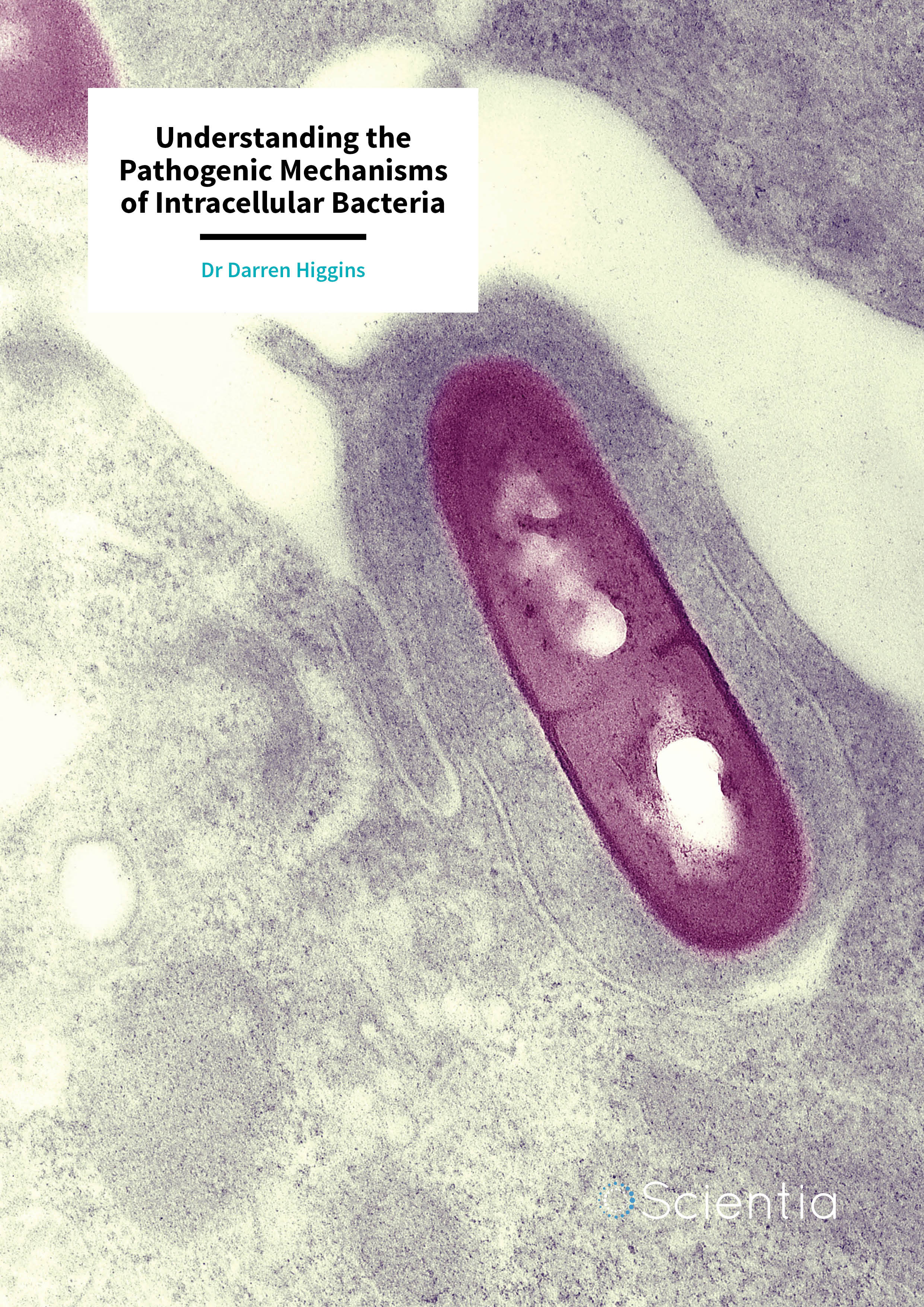 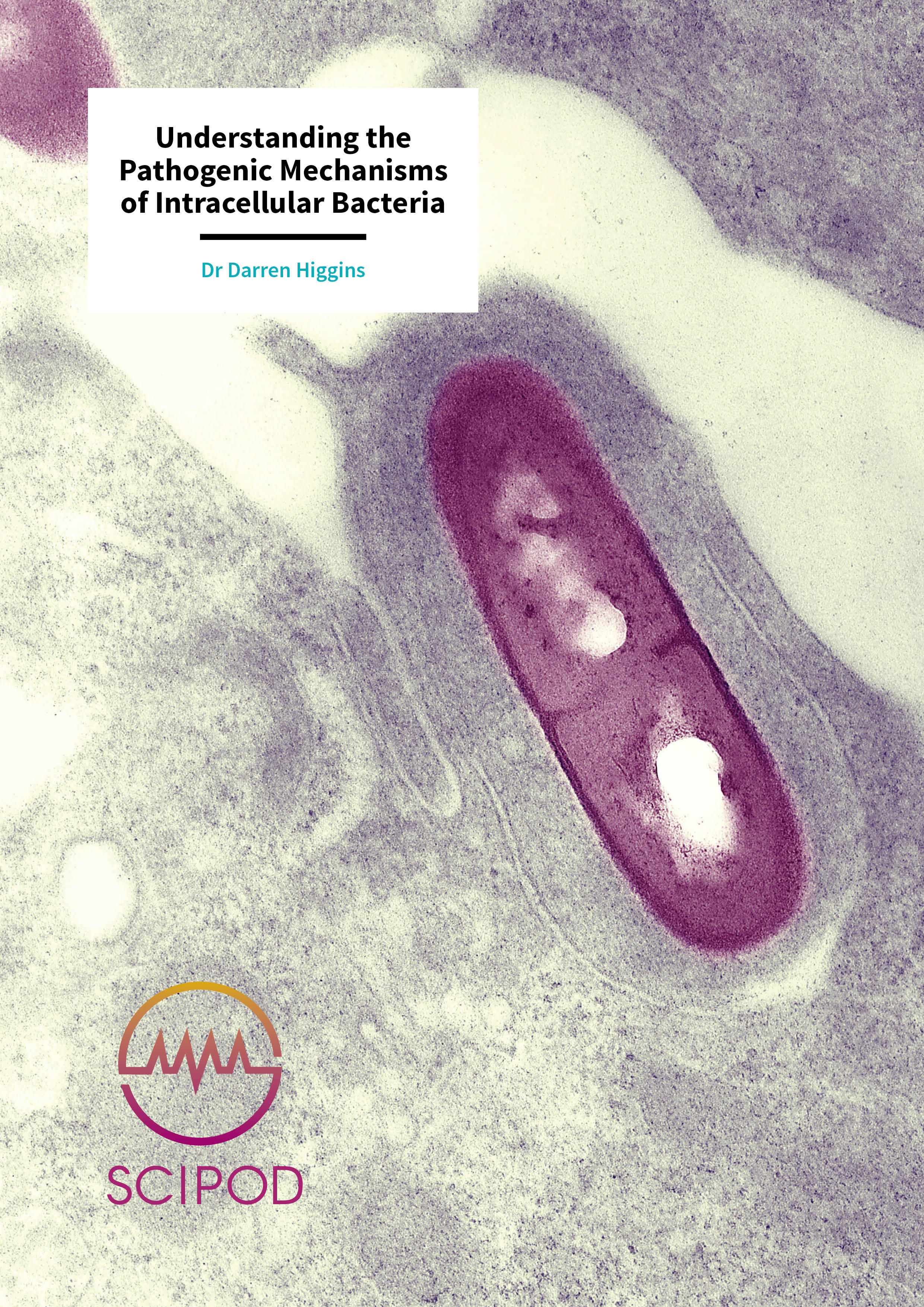 However, pathogenic bacteria such as Listeria monocytogenes have found clever ways to escape the vacuole to access the interior of the host cell, where the environment is optimal for its replication and the infection of neighbouring cells. This escape from the vacuole of the phagocytic cell is paramount to ensure survival and spread of the bacteria. 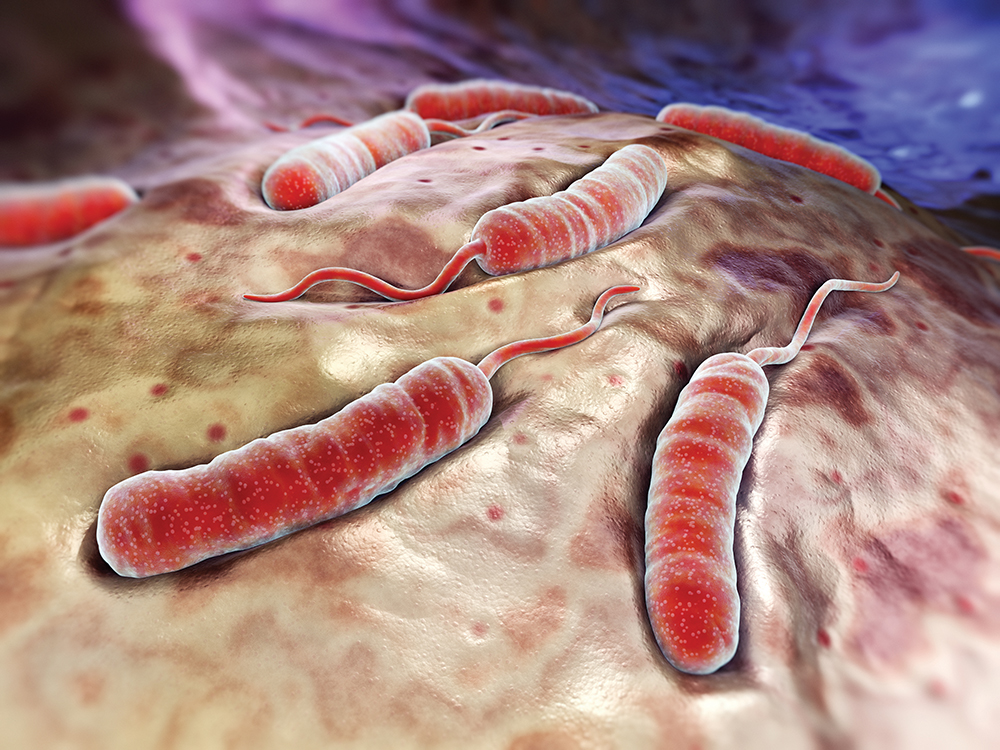 This vacuolar escape has been accredited to the secretion, by the bacteria, of the protein listeriolysin O (LLO) and also two others called phospholipases C, a broad-range phospholipase C (PC-PLC) and a phosphatidylinositol-speciﬁc phospholipase C (PI-PLC). LLO is a pore-forming toxin, which creates holes in the phagocytic vacuole to promote bacterial escape. It is suggested that PC-PLC and PI-PLC assist in this by either promoting LLO activity and/or inhibiting the repair of the holes created by LLO.

Dr Higgins and his team have pioneered the use of genetic manipulation techniques such as RNA interference (RNAi) – a technique that inhibits expression of a specific gene – to determine what in the host is required for intracellular infections. Knowing that LLO is responsible for slowing down vacuole maturation, they used this RNAi technique to show a correlation between reduced phagocytic vacuole development with the escape of Listeria monocytogenes from this compartment in the cell.

With their findings on LLO activities, Dr Higgins and his colleagues have identified the pathogen-specific proteins that induce a protective immune response. These proteins and the method by which they were determined are being further developed for the generation of novel vaccines by Genocea Biosciences, a vaccine development company co-founded by Dr Higgins in late 2006. 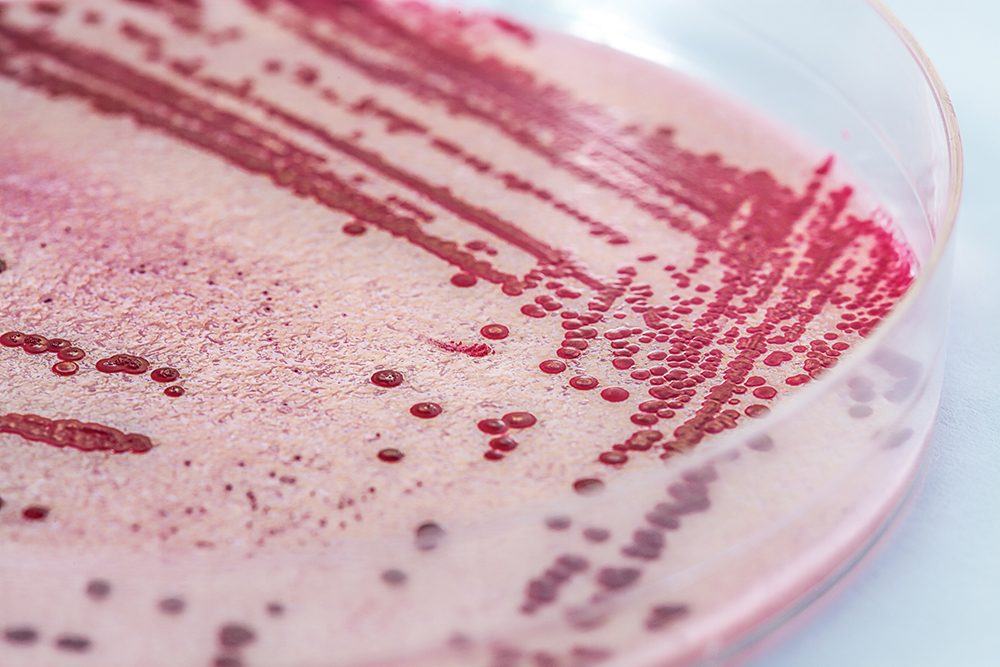 Once the pathogenic bacteria enter the interior of the host cell and replicate, the next goal is to infect neighbouring cells. Each bacterium recruits to its cell surface host cytoskeletal proteins – protein structures that help cells maintain their shape and mechanical support – to assemble a tail. This continuous lengthening of the tail pushes the bacteria out against the host cell membrane, forming an asymmetrical protrusion.

As well as engulfing and destroying pathogenic bacteria, phagocytic cells also engulf damaged or dead cells within host tissue. They do this by binding to a phospholipid called exofacial phosphatidylserine (PS), which is found on cells or cellular debris after their external membranes have been compromised.

In collaboration with Dr John Brumell, Dr Higgins’ team have shown that Listeria monocytogenes takes advantage of this clearance system to promote cell-to-cell spread during infection. It does this by presenting the asymmetrical bacteria-containing protrusion from the primary infected cell to a second phagocytic cell, tricking it, so it too is engulfed.

This process also ensures that the bacteria avoid the space outside of the cell and any immune molecules, such as antibodies, within it. Using this finding, the team believes that, ‘PS-targeted therapeutics may be useful in the fight against infections by Listeria monocytogenes and other bacteria that use similar strategies of cell-to-cell spread during infection.’

Once the second cell engulfs the protrusion filled with the microbe, a second vacuole is formed around it. The pore-forming toxin LLO again plays a key role by damaging this second vacuole to allow the bacteria to escape.

The Genetics of Replication

To ascertain the bacterial and host factors necessary for efficient replication within the host cell, Dr Higgins and his colleague Dr Perry adapted a screening method called fluorescence-activated cell sorting (FACS) that uses mutagenized fluorescently labelled bacteria to identify the genes involved in the replication of Listeria monocytogenes within the cell.

Their work revealed that deletion of the genes menD or pepP from Listeria monocytogenes stopped the bacteria from efficiently growing within host cells cultured in the laboratory. They also showed that when menD or pepP were deleted Listeria monocytogenes had a reduced ability to infect mice. This validated the team’s screening method to identify genes that control the intracellular growth rates of bacteria. 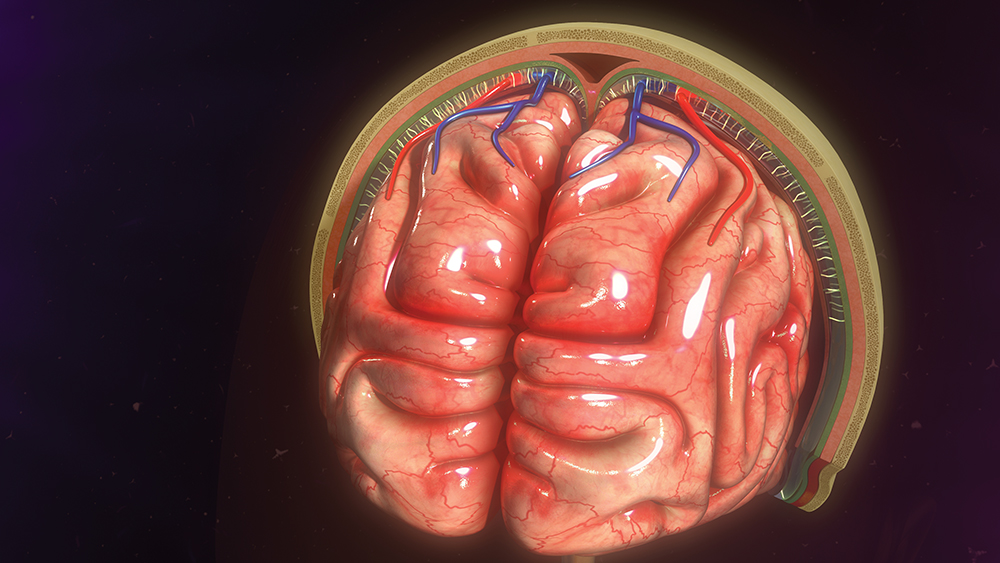 Infection of the Brain

The blood-brain barrier, as the name suggests, is a highly restrictive barrier protecting the brain from foreign objects in the blood. Listeria monocytogenes is amongst a select group of bacterial pathogens, which after effectively invading the host body, is able to cross the blood-brain barrier to infect the brain, causing life-threatening meningitis and encephalitis. ‘The long-term goal of our current work is to provide further insights into how intracellular pathogens invade the brain and to identify novel approaches to prevent bacterial infections of the brain,’ says Dr Higgins.

It is well known that Listeria monocytogenes is capable of invading other non-phagocytic host cells, through interactions between the proteins found on the bacterial cell surface and the host cell. Two proteins called InIA and InIB interact with the host cell surface proteins E-cadherin and the Met receptor, respectively.

This interaction ensures that Listeria monocytogenes is internalised into the host cell, although studies have shown InIA and InIB do not play a role in the bacterial internalisation within the brain, suggesting E-cadherin and the Met receptor may not be responsible for allowing these bacteria to cross the blood-brain barrier. With that in mind and with funding from the National Institutes of Health, Dr Higgins and his colleague’s Dr Halvorsen and Dr Ghosh went on to investigate the protein interactions involved in blood-brain barrier penetration.

They discovered the interaction between vimentin, a protein found on the host cell surface and InIF, another protein found on the cell surface of Listeria monocytogenes, is required to facilitate efficient bacterial infection of the brain. This finding may indicate that vimentin is a central factor used by many other bacteria to cross the blood-brain barrier to colonise the brain and cause meningitis. The team hopes that a greater understanding of this vimentin-InIF interaction could provide possible targets for the development of novel therapeutics for meningitis infections.

The research team recognises the lack of knowledge about the exact mechanism of the bacterial invasion and the progression of brain infections. Their future goal is to determine if Listeria monocytogenes infects specific brain cell types and to assess cell-to-cell spread between different host cell types.

This is important, as it will provide valuable knowledge of the mechanisms by which Listeria monocytogenes invades the brain and causes potentially fatal meningitis. They also hope to find additional factors that facilitate Listeria monocytogenes invasion of the brain and identify novel therapeutic targets to prevent brain infections by this and other pathogenic bacteria. 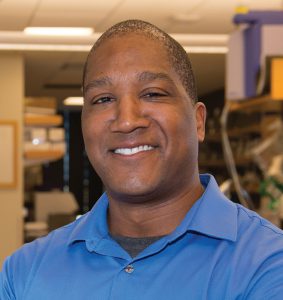 Dr Higgins is a professor at Harvard Medical School in Boston, within the department of Microbiology and Immunobiology. Dr Higgins received his undergraduate degree in Microbiology from Texas A&M University, then went on to complete his PhD in Microbiology and Immunology at the University of Michigan Medical School in 1995, followed by postdoctoral training at the University of Pennsylvania School of Medicine and the University of California, Berkeley. Initially joining Harvard Medical School as an Assistant Professor in 1999, Dr Higgins was promoted to Associate Professor in 2005 and to Professor in 2009. His laboratory at Harvard is currently focused on understanding fundamental host-pathogen interactions that lead to virulence and the development of protective immunity to intracellular bacterial pathogens. He has served as an editorial board member on several prominent journals in the field. Dr Higgins also co-founded and serves on the scientific advisory board of Genocea Biosciences Inc., a company created to commercialise key breakthroughs in vaccine discovery for intracellular pathogens.