Chicken meat is one of the world’s most relied upon animal food sources, and a major factor in economics and food security for many people. Dr David Peebles at Mississippi State University has dedicated his career to the unique physiological and nutritional needs of meat chickens, and has developed an innovative approach to improving their health and wellbeing, starting in the egg.

Chicken is one of the most popular types of meat in the United States, and the production of meat chickens, known as broiler chickens, is a major agricultural industry. The U.S. alone produces about 8.6 billion broiler chickens every year for approximately $45 billion in sales. Supporting the health and wellness of these animals is of paramount concern, both from animal welfare and economic perspectives. Processes and procedures that help to improve the health of chickens before they even hatch can have dramatic effects for chicken wellbeing and farmer profits. Dr David Peebles studies chicken physiology from his laboratory at Mississippi State University, focusing on interventions such as vaccines and supplements that can be supplied to young broiler chicks before they even hatch, preventing disease and supporting healthy growth and development. His work helps broiler chicken farmers raise happier, healthier flocks and reduce losses due to disease and development abnormalities.

Many avian diseases can be devastating to a flock of susceptible birds, and due to their genetic similarities, broiler chickens are often hit particularly hard by outbreaks. Disease outbreaks cause suffering for the chickens, and can be devastating to farmers when diseases are deadly. Many diseases can affect newly hatched chicks, so early vaccination is often critical to disease prevention. Broiler chicken eggs typically take 21 days to hatch, and the immune system of an 18-day old embryo growing inside an egg is developed enough for a vaccine to be effective.

Vaccinating embryos a few days prior to hatching gives young chicks the opportunity to develop immunity to diseases while they are still safe inside their shells, and has been transformative for helping broiler chicken farmers prevent disease. The practice of pre-hatch or ‘in-ovo’ vaccinations has grown widespread in the poultry industry; however, new vaccinations must be carefully tested to ensure that they do not negatively impact growing embryos nor affect the health and body size of adult birds. Dr Peebles and his team set out to test the effectiveness and long-term health effects of pre-hatch vaccinations for common broiler chicken diseases. 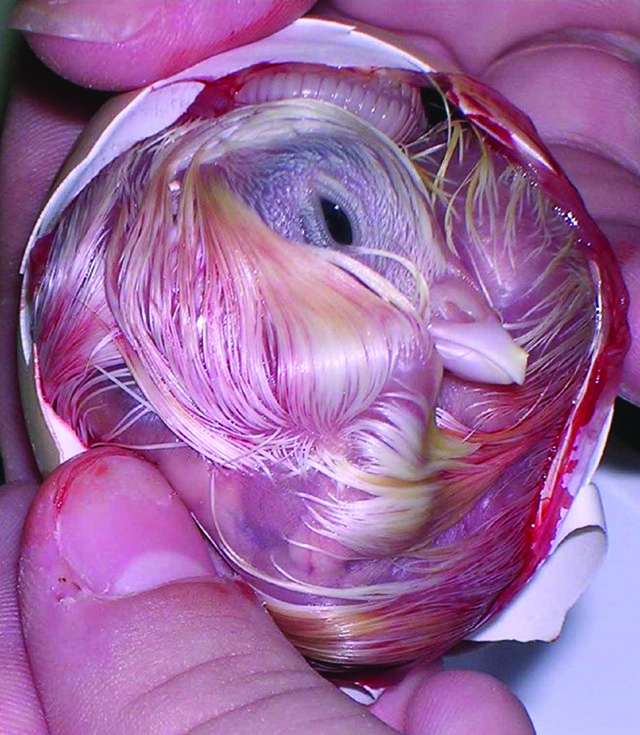 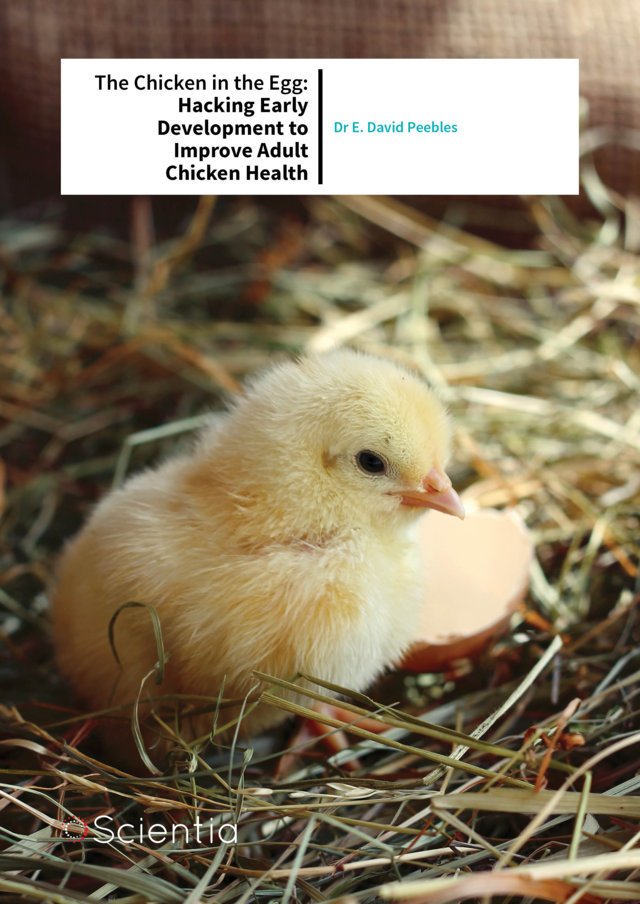 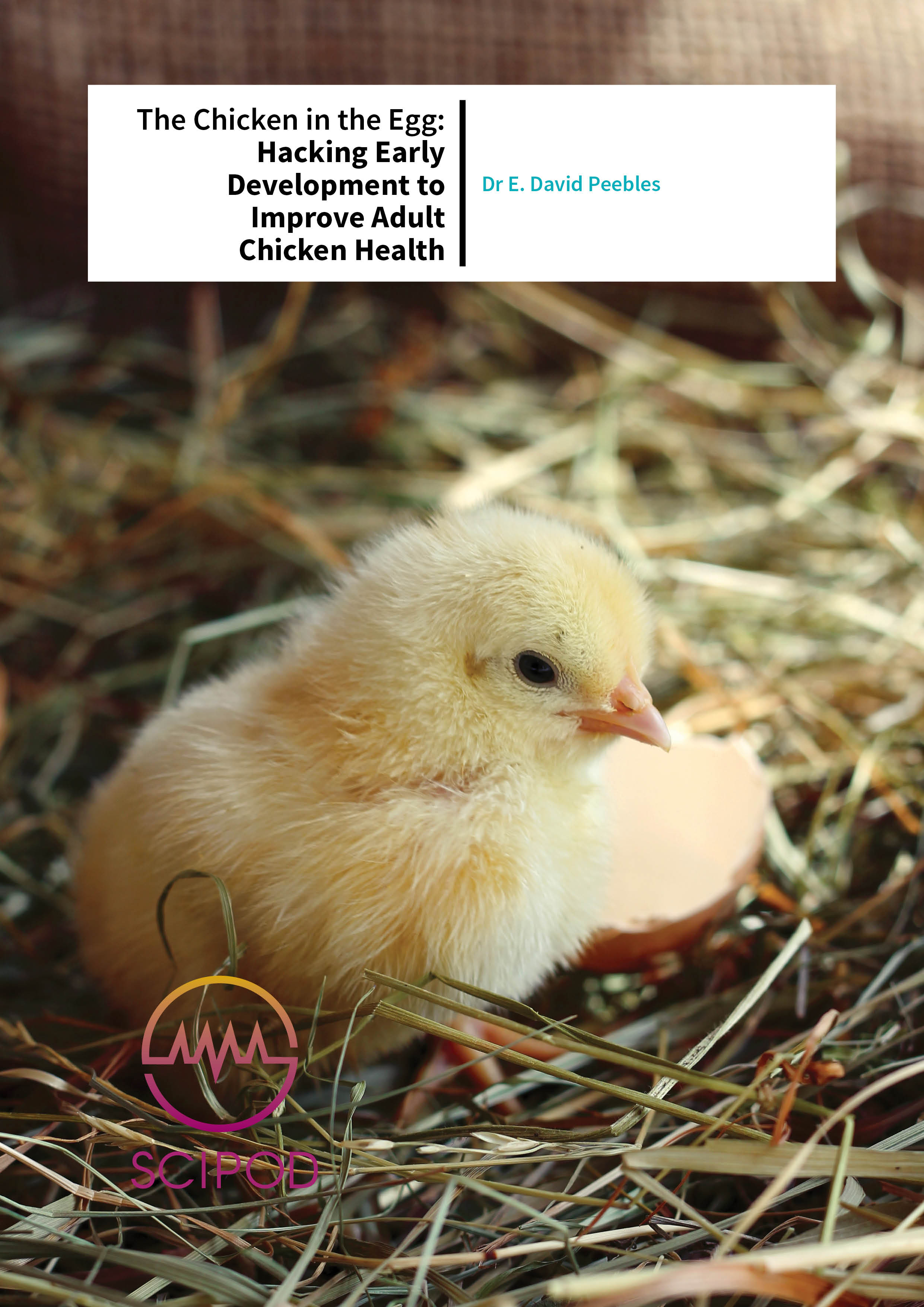 Marek’s disease is a serious avian viral disease that often leads to paralysis and death in chickens. An outbreak of Marek’s disease can lead to massive losses of life, with death rates of up to 80%, so vaccinating against this virus is critical to protect broiler flocks. Traditionally the Marek’s disease vaccine has been administered subcutaneously to newly hatched chicks, but recently in-ovo injections have become more common.

Dr Peebles and his team wished to test the long-term effects of in-ovo vaccinations on chicken growth, and see if the stress of either mode of injection might interact with other stressors, such as staying in the incubator for a long period after hatching before being moved to a pen. They vaccinated one group of broiler chicken embryos in-ovo, and another group of newly hatched chicks subcutaneously. From each vaccination group, half of the chicks were left in their hatching incubator for a standard 4 hours, while the other half stayed for 18. They then monitored the chicks regularly until they reached adult weight (about 7 weeks of age). When comparing adult birds, they found no effect of vaccination protocol, but birds from the 18-hour incubation groups showed slower growth. These results demonstrate that the in-ovo vaccinations were not detrimental to adult health.

The parasite coccidiosis is another critical avian disease that many farmers opt to vaccinate their chickens against. Mild coccidiosis causes weight loss and poor digestion, while more severe cases can lead to death, particularly in chicks. The vaccine for this parasite is a live non-attenuated dose of coccidiosis eggs, and concerns existed that the vaccine might reduce weight gain in growing broiler chicks. Dr Peebles and his team compared in-ovo vaccinated chicks to unvaccinated and saline injected peers, and found no detrimental effect, indicating that the vaccine is safe and beneficial for use in broiler chickens. 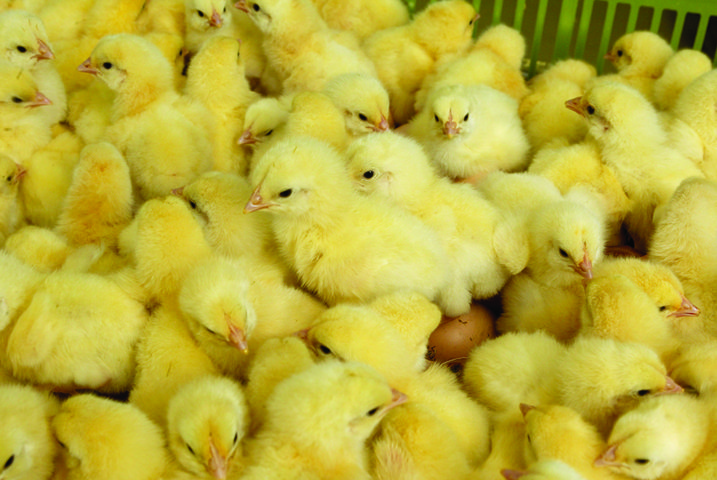 Broiler Health Begins in the Egg

Broiler chickens have been specifically bred over many generations to grow much faster than other types of chicken, and have larger muscle mass in areas of the body that are used for meat cuts. Beyond infectious avian diseases, broiler chickens are susceptible to a number of health issues related to this rapid growth. Many of these conditions begin early in life, and some are reversible or can be moderated by nutrition.

Dr Peebles’ early career research focused largely on hen and chick nutrition, infectious avian diseases, and egg incubation conditions, which many of his graduate research students still engage in. However, his focus has shifted slightly over the past five years. He recognised that over 95% of commercial broiler chicken producers were already engaged in injecting in-ovo vaccinations, and thought that perhaps the same procedure could be used to introduce nutrients, electrolytes, and other compounds that could contribute to the health of chickens and support their fast growth. Many of these compounds can be administered at the same time as vaccinations, reducing the need for multiple injections into the egg, and potentially providing young chicks with a head start on a healthy life.

Unlike mammalian mothers, who are able to provide their growing embryos with nutrients almost continuously, a hen must deposit all the nutrients a growing chick needs at the time she lays the egg. Healthy mothers are more likely to lay healthy eggs, but even in the best of situations, a mother hen laying multiple eggs may not deposit nutrients equally between eggs, putting some of her offspring at a potential disadvantage. These small changes are minor in most chickens, but in rapid growing broilers they can quickly lead to health problems, such as low hatch rates, bone abnormalities, and poor post-hatch growth. In-ovo injections could grant farmers the ability to level the playing field and hatch healthier, more robust chicks. However, this use of the technology is still in its infancy and the effects of many potential nutrients and compounds are not yet well known. Dr Peebles and his team have engaged in numerous in-ovo nutrient studies, illuminating potentially helpful compounds that can supplement maternal nutrients for stronger chicks. 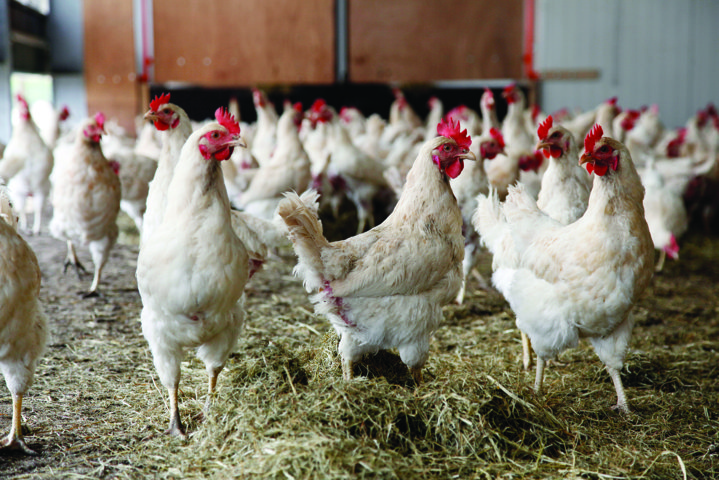 Supplementing embryos before they hatch requires a delicate understanding of the physiology of a developing chick, as many compounds that an adult bird could happily eat might not have the same effects inside the egg. It is critical to identify what compounds have the potential to be used to the chick’s benefit, versus those that are likely to cause damage. One of the first nutrients that Dr Peebles studied as a supplement to include alongside in-ovo vaccinations was L-carnitine. L-carnitine has been shown to increase muscle mass and decrease fat when added to chicken diets. Although adult chickens can produce this compound naturally, embryos have limited ability to produce it in the egg, despite some evidence that it might help embryos extract nutrients more easily from their yolk.

Dr Peebles’ team added different levels of L-carnitine to 18-day old eggs and observed subsequent hatch rates and adult body condition. Although the compound did not change adult body composition, it led to minor health improvements in newly hatched chicks, and at high levels increased successful hatching rates, making it an excellent target for supplementation programs. Similarly, the team tested a range of common electrolytes at different concentrations. They found that potassium chloride and tripotassium citrate both hold promise as electrolytes that can improve hydration in the egg, allowing chicks to hatch in better health. 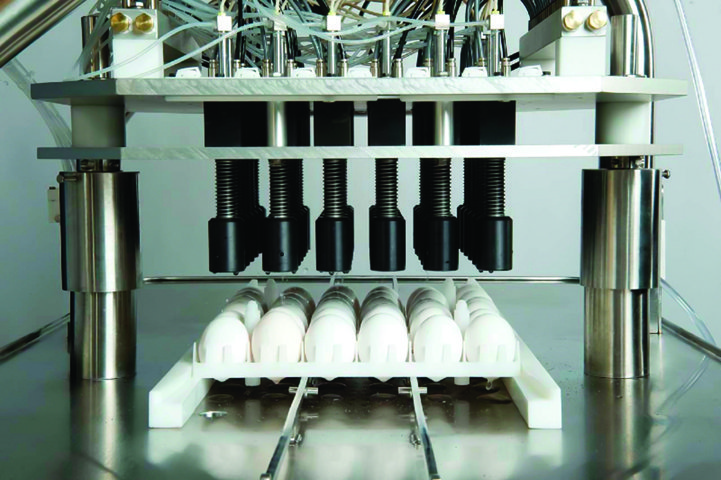 While some nutrient supplements showed promise, others required more caution. Dr Peebles tested injections of various carbohydrate solutions, in the hope of providing an additional energy source for the developing chick. One of the most common measures to assess the quality of newly hatched chicks is body weight, and the gold standard is yolk-free body weight, when the leftover yolk is removed prior to weighing. Though more labour-intensive, this provides a clearer picture of how developed the chick is – the yolk is the only food source in the egg, so a chick with low yolk-free body weight and lots of leftover yolk is likely less developed upon hatching, compared to a chick that has consumed its yolk. When total hatchling body weight is taken without cleaning off leftover yolk, this difference is often concealed.

Dr Peebles’ team found that chicks that had been supplemented with any type of carbohydrate had a higher total body weight at hatching. However, chicks that had received maltose, sucrose, or fructose had lower yolk-free body weights than their peers who had received glucose or dextrin, suggesting that some carbohydrates interfere with yolk absorption during development. Farmers should use care if utilising these carbohydrates with their in-ovo supplementation regiments.

One of the team’s most promising findings has been the effects of vitamin D3 when provided to developing chicks pre-hatch. Due to their accelerated growth and development, broiler chickens often have weak, flexible bones and are prone to bone abnormalities and injury. Adding a moderate dose of vitamin D3 with the vaccine injection dilution improved bone development, and a larger dose significantly improved bone mineralisation and health. Further, the vitamin alleviated one of the primary detrimental effects of in-ovo vaccination – slightly lower hatch rates – and improved the calcium balance in the yolk. The benefits of in-ovo supplementation with vitamin D3 are very high, improving both hatch rates and the overall health and robustness of adult birds. 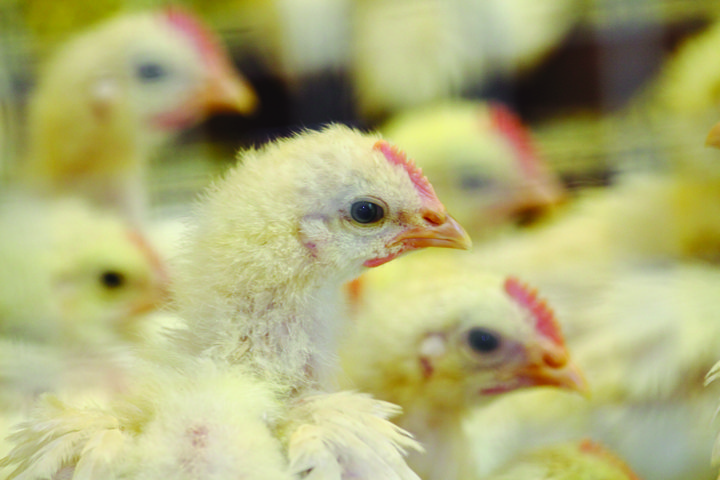 As technology advances, even age-old traditions like raising chickens benefit from the incredible improvements that science offers. The practice of vaccinating chicken embryos while they are still developing in the egg has dramatically reduced incidence of avian infectious diseases and helped to protect flocks from potentially devastating outbreaks. As this practice becomes increasingly widespread, savvy physiologists like Dr Peebles and his colleagues have been able to use their expert understanding of the needs of developing embryos, to co-opt the vaccination procedure and provide additional nutritional support to growing chicks, before they even hatch. The result is healthier chickens that require less medical intervention as adults and experience more comfortable lives, all while increasing yields for chicken farmers. Dr Peebles and his team will continue their work identifying beneficial pre-hatch compounds and using innovation to improve chicken health worldwide. 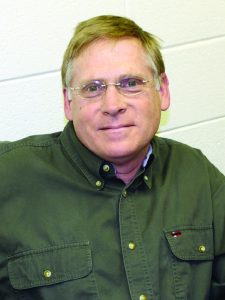 Dr David Peebles began his research career at the University of South Carolina with a Bachelor’s degree in Marine Biology in 1979, and continued his education with a Master’s in Biology from the College of William and Mary in 1981. He went on to obtain his PhD in Physiology from North Carolina State University in 1986, with a dissertation on broiler chicken egg production, before founding his current laboratory in the Department of Poultry Science at Mississippi State University. He currently serves as a professor of Poultry Science, splitting his time between teaching undergraduate genetics and performing innovative research. He has trained over 30 Master’s and PhD students, and mentored many undergraduate researchers. He has devoted his academic career to understanding and improving the health and physiology of broiler chickens through nutrition and management practices. His work is widely influential in the poultry farming community, and his methods continue to improve poultry health and yields in the United States.