For almost two decades, Dr Gary Williams and his graduate students at Texas A&M AgriLife Research/Texas A&M University have worked to unveil the mysteries of puberty in young female cattle. With this research, Dr Williams and his former graduate student and current faculty colleague, Dr Rodolfo Cardoso, have come to the realisation that puberty is not only affected by events that take place a few months beforehand, but it is also affected by events during pregnancy and early development.

Timing of Puberty in Heifers

The age at which young female cattle (heifers) become reproductively active has major implications for beef cattle production. Despite this importance, a significant percentage of heifers systematically fail to reach this milestone in a timely manner and do not deliver a calf at the required age of two years. For this reason, researchers are striving for a better understanding of the mechanisms that control sexual maturation of the reproductive axis – a system involving several organs that control the production of sex hormones, eggs and sperm cells.

Puberty in female mammals – including humans – is a highly complex and intricate process involving the maturation of hormonal signalling pathways in a part of the lower brain called the hypothalamus. For heifers, productivity depends upon their ability to become pregnant during their first breeding season and to calve by about two years of age.

It is well established that puberty is regulated by many different factors, among which nutrition is a major one. However, the exact ways in which nutrition and metabolism affect puberty remain unresolved. For the past 20 years, this has been the focus of research conducted by Dr Gary Williams, based at the Texas A&M AgriLife Research Station in Beeville. For the last 10 years, his work has been in collaboration with former graduate student and current colleague, Dr Rodolfo Cardoso, of Texas A&M University-College Station. The team’s research has been supported continuously since 2000 by competitive grants from the Agriculture and Food Research Initiative of the USDA National Institute of Food and Agriculture.

In earlier research, the Texas A&M team and their collaborators showed that feeding early-weaned heifers a high-calorie diet during the juvenile period can significantly advance the onset of puberty. In fact, the scientists found that between 60 and 80% of heifers fed this diet between 4 and 8 months of age reach puberty far too early (precocious puberty), achieving sexual maturity by 300 days of age. This is significantly earlier than heifers fed a typical forage-based diet and occurs as a result of effects on hypothalamic signalling pathways that control the secretion of essential hormones.

‘Much of the work we do has implications not only for livestock production but also in the human biomedical field. If we can understand the nutritional and developmental mechanisms that underlie the development of precocious puberty, methods can be developed to achieve puberty in heifers that is neither too early nor too late and avoid or minimise the occurrence of precocious puberty in girls.’

The research team also detected changes in expression of nearly 700 genes in the hypothalamus between heifers on a low-calorie diet versus those fed a high-calorie diet. These include genes associated with appetite and metabolism. In several genes, they also found evidence of epigenetic changes – alterations in gene expression without any changes to the DNA itself. ‘We believe that these changes are long-lasting because they are associated with consistent physiological events that occur only later in life and appear to be imprinted in the genome,’ explains Dr Williams. 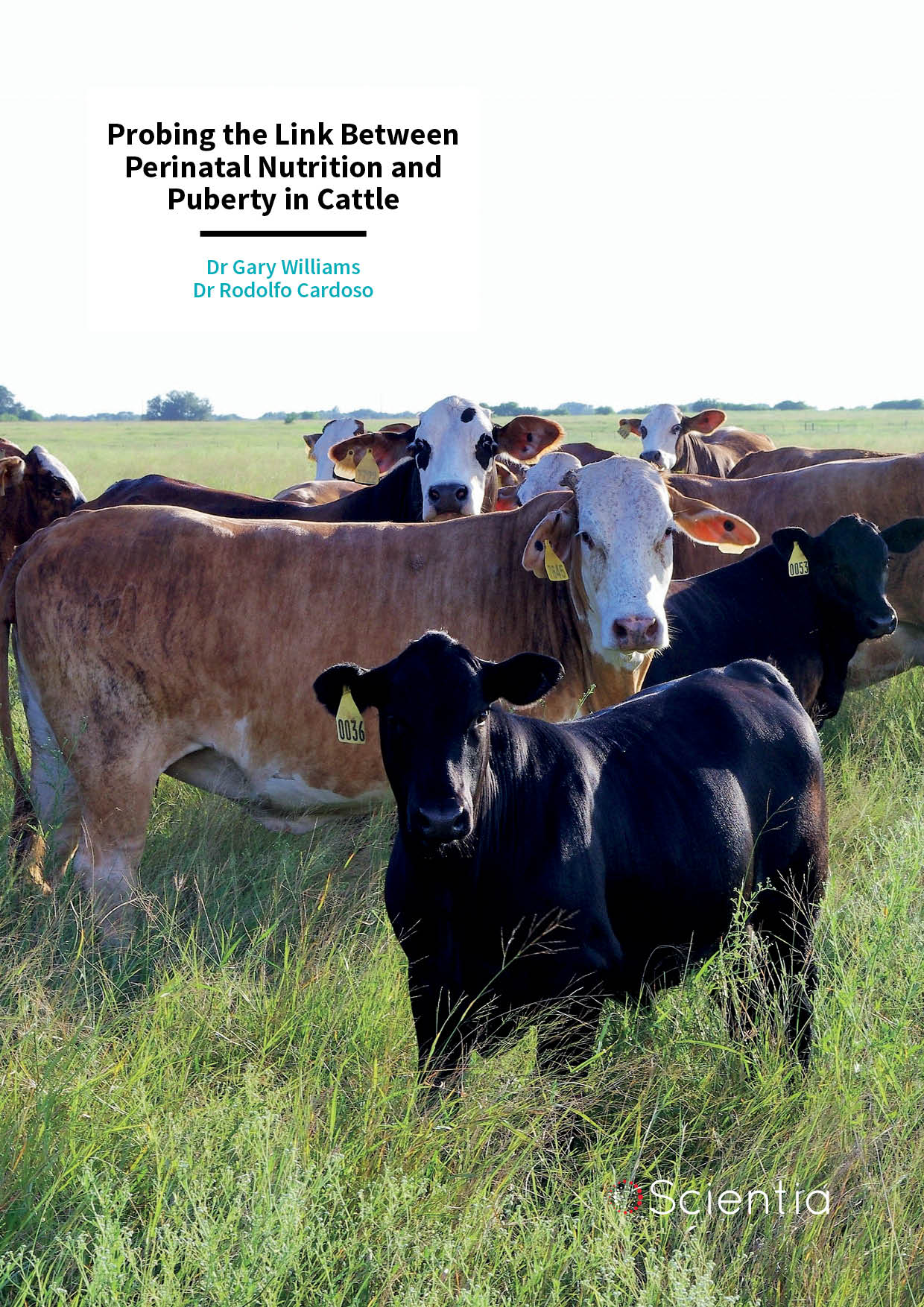 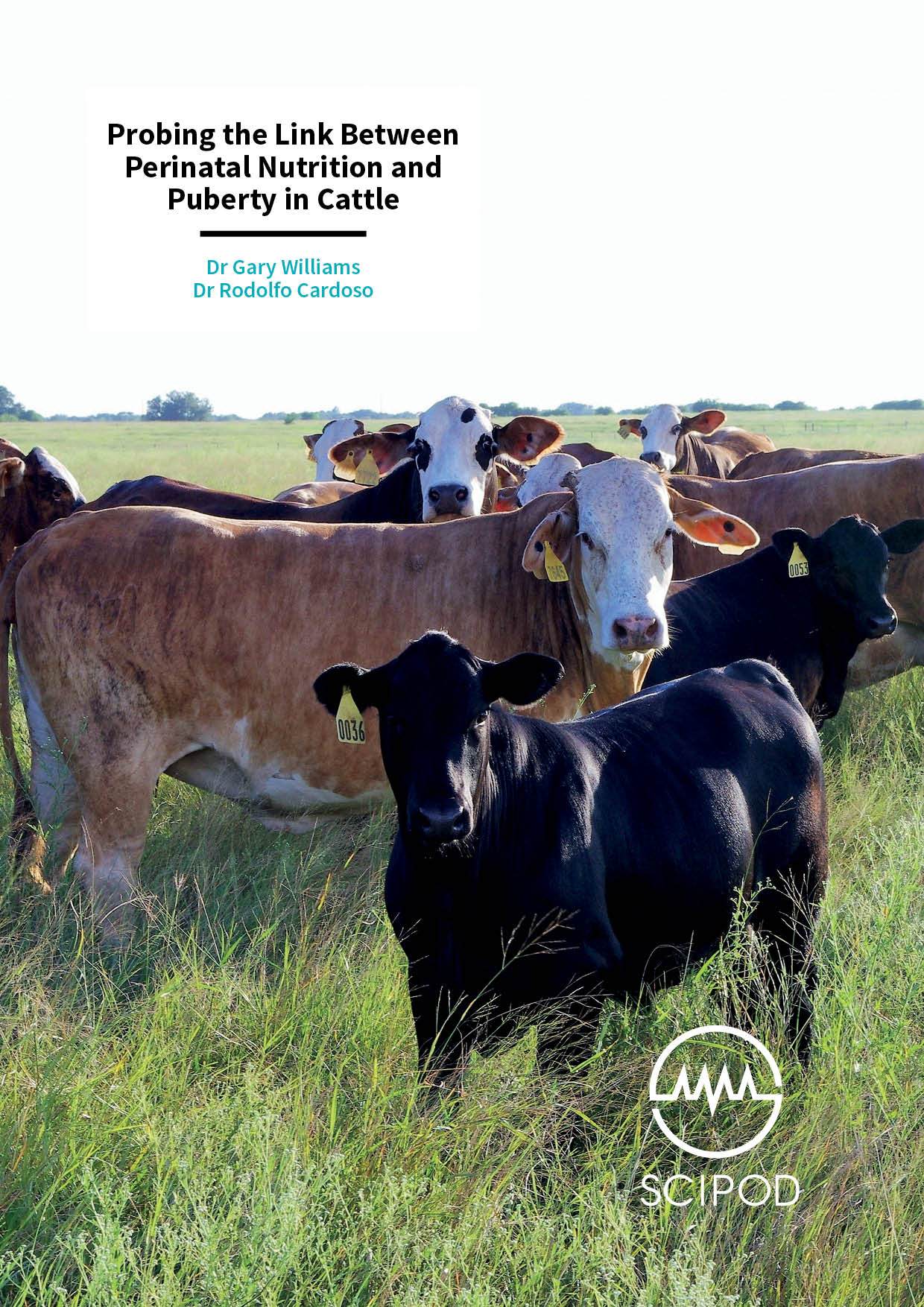 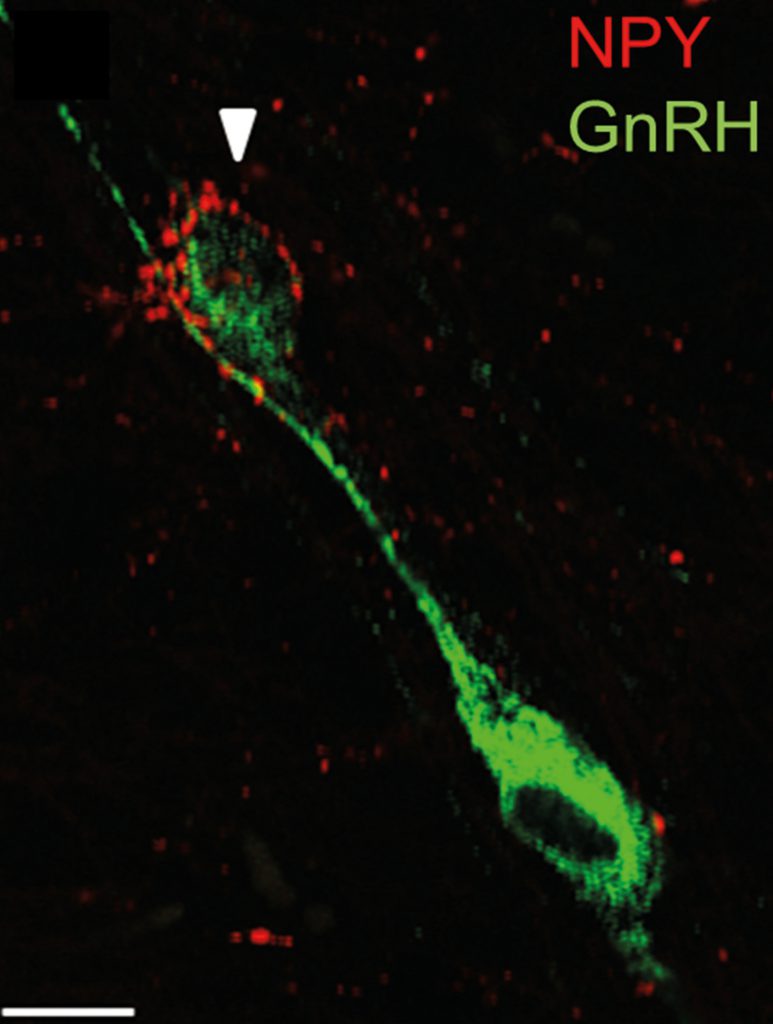 Elevated body weight gain during the juvenile period inhibits NPY projections to GnRH neurons in the hypothalamusFeeding heifers a high-calorie diet continuously following typical weaning at 8 to 9 months of age has been the traditional approach used to speed up the onset of puberty in heifers. However, based on recent research from the Texas A&M University duo, there may be a better way to do it. To identify the window in which such diets can most effectively accelerate puberty onset, the researchers compared nutritional regimens involving alternating periods of high- and low-calorie diets over four 10-week periods beginning at 4 months of age. They called this regimen the ‘Stair-Step’ nutritional model.

According to Dr Cardoso, this means that ‘functional alterations in the hypothalamus during the early juvenile period can program the timing of puberty that occurs months later.’ There’s no reason to believe that a similar feeding pattern wouldn’t work in large-scale operations, giving cattle producers a more cost-effective and targeted approach.

Unsurprisingly, heifers with greater adipose tissue reserves reach puberty earlier than those with less. It turns out that the link between chunkier heifers and earlier puberty onset is also not surprising, as a critical amount of fat is necessary for adequate fertility. This idea had been around since 1950s, but when the leptin gene was discovered in 1994, researchers started getting a better understanding about how puberty onset is regulated.

Leptin, a hormone produced in adipose tissue, seems to be the link between nutrition and reproduction, as it plays a major role in regulating energy metabolism and reproduction. In women, for example, a drastic reduction in fat reserves can result in adverse effects on reproduction that last until normal levels are restored.

With respect to heifers, Drs Cardoso and Williams observed a reciprocal relationship between leptin concentrations and levels of a peptide hormone called neuropeptide Y (NPY for short) in the brains of heifers. They also noticed a significant increase in blood levels of leptin about 6 to 8 weeks after heifers start consuming high-calorie diets, and this is accompanied by a decrease of NPY in the brain. Since the effects of leptin on the central nervous system are mediated largely by NPY, greater levels of leptin and lower levels of NPY in the brain can accelerate the onset of puberty.

‘Our findings in the bovine female support the notion that nutritional regimens that promote accelerated rates of body weight gain during juvenile development reduce overall NPY levels in the hypothalamus by decreasing the number of NPY neurons interacting with gonadotropin-releasing hormone neurons in the hypothalamus, thus facilitating pubertal maturation,’ explains Dr Williams. 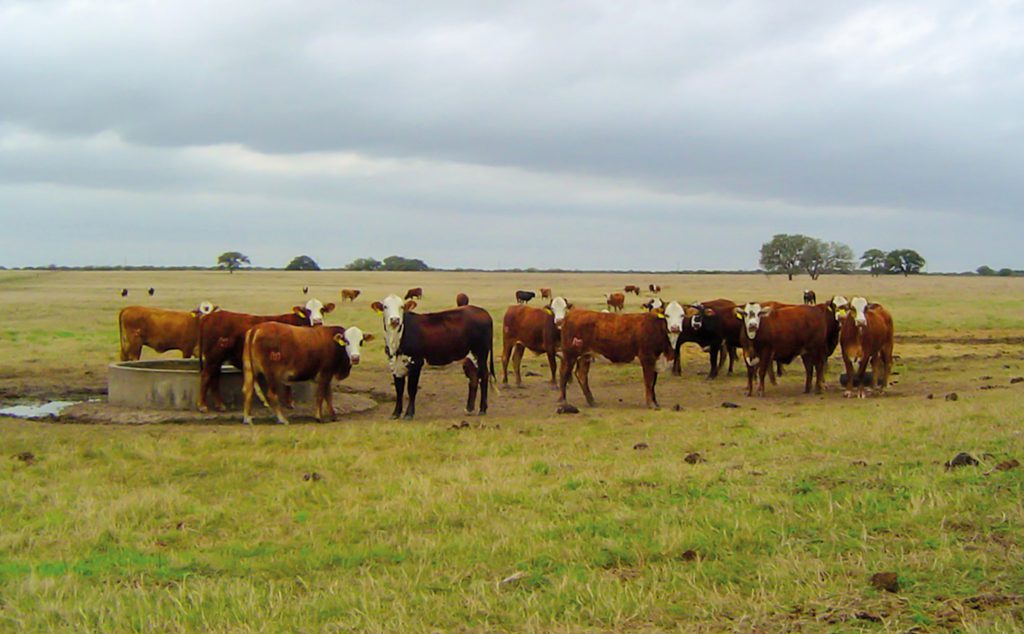 Although Dr Williams and Dr Cardoso had identified a ‘sweet spot’ during the juvenile period for advancing the age of puberty, they noticed that the actual onset of puberty was still sometimes inconsistent, meaning that other factors were at play. One of the factors that had not been examined is the nutritional and metabolic status of the mother during gestation.

This idea of a later event being affected by something that happened during gestation is not new. For example, there is mounting evidence in humans that a mother who experiences starvation during pregnancy can lead to the child experiencing cardiovascular problems later in life. These results show that the perinatal period – late gestation and immediately after birth – is susceptible to changes that are observed during adulthood.

To study this effect, the team developed a model to investigate prenatal and early postnatal nutritional levels. They fed pregnant cows bearing female foetuses various diets to achieve thin, moderate or obese body conditions from 6 months of gestation until calving. Heifer offspring were then assigned randomly into two groups, to achieve either a low or high rate of weight gain until they were 8 months old.

The team found that the most relevant effects involve calorie restriction during gestation and the postnatal period. In both of these scenarios, the researchers noticed significantly lowered expression of genes for leptin receptors and transporter molecules that transfer leptin across the blood-brain barrier in heifers aged 8 months. ‘Our studies indicate that nutritional imbalances during perinatal development lead to structural and functional changes in the leptin-sensing neurons of heifers,’ says Dr Cardoso. 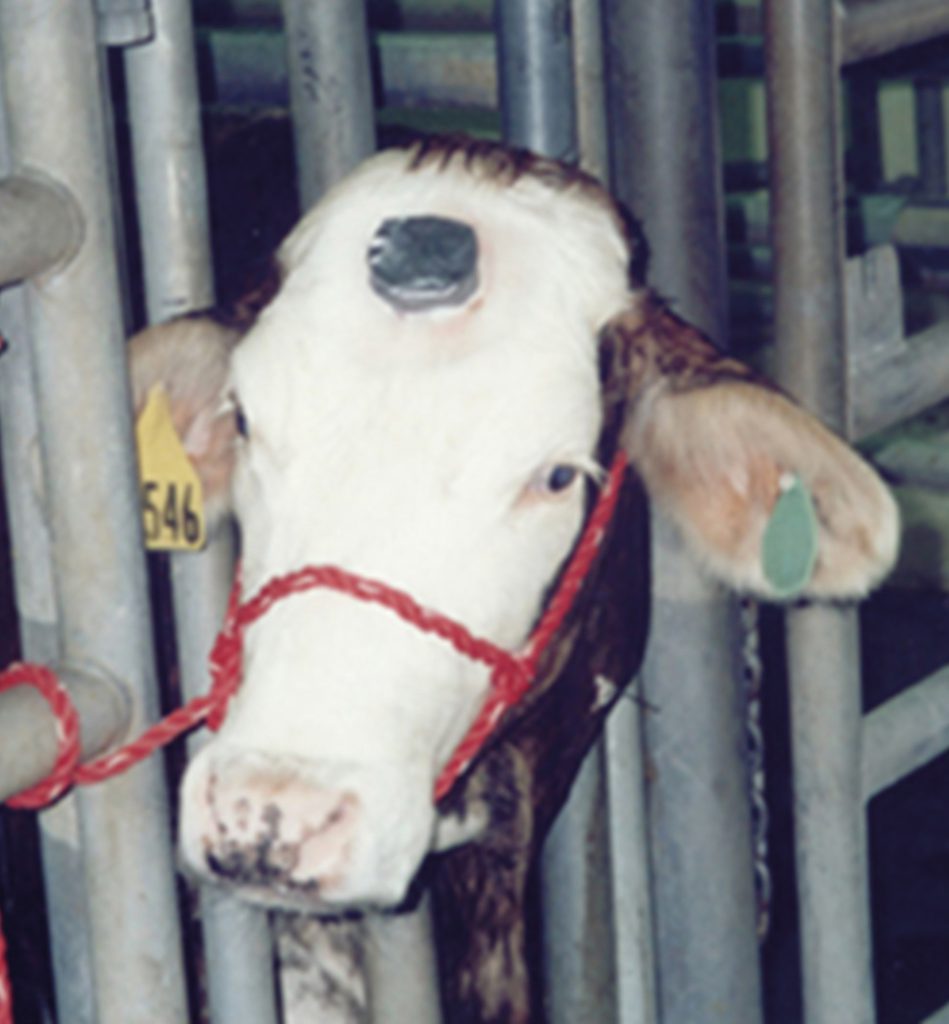 The Same Applies to Humans

All of the team’s work involves cattle and has a strong agricultural focus, but the researchers are also aware that the same principles apply to other species, including humans. For young girls, the timing of puberty can be accelerated or delayed by excessive or restricted food intake either while the mother is pregnant or during early childhood.

When it comes to future challenges, Dr Williams and Dr Cardoso want to continue exploring the impact of prenatal and post-natal nutrition in developing heifers. One of their team’s aims is to detect changes in the expression of certain genes and understand how those changes affect metabolism, both in the short and long term.

The researchers are also keen to determine whether these nutritional effects can still be seen in future generations. This may seem a little farfetched, but studies in numerous species have shown that the impact of nutritional changes can be spotted in subsequent generations. Some of these studies will be challenging to replicate in cattle, but the results could potentially have massive repercussions for animal health and productivity. 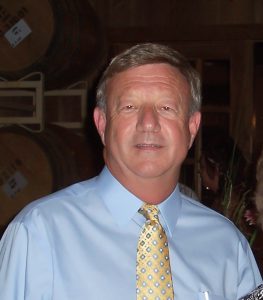 Dr Gary Williams is Regents Fellow, AgriLife Research Faculty Fellow and Professor with Texas A&M AgriLife Research-Beeville and the Department of Animal Science, Texas A&M University-College Station. He received his doctorate at the University of Arizona. Dr Williams is nationally and internationally recognised for his research on the neuroendocrinology and reproductive physiology of beef cattle and horses, and is currently focused on neuroendocrine signalling pathways that control the nutritional programming of puberty in the beef heifer. He has received multiple awards, including the American Society of Animal Science Animal Physiology and Endocrinology Award in 2004 and Research Fellow Award in 2017. He has successfully mentored 44 MSc, PhD and postdoctoral trainees. 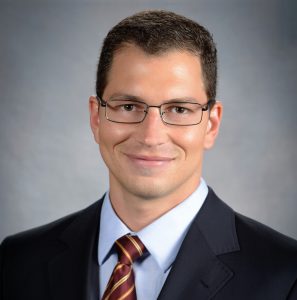 Dr Rodolfo Cardoso is an Assistant Professor in the Department of Animal Science at Texas A&M University. He received his DVM and MS degrees at Sao Paulo State University (Brazil), and completed his PhD at Texas A&M University in 2014. Dr Cardoso went on to complete a postdoctoral fellowship in Reproductive Endocrinology at the University of Michigan before joining the Texas A&M University faculty in 2016. Dr Cardoso is nationally and internationally recognised for his research in reproductive neuroendocrinology in female ruminants. Using beef heifers and sheep as animal models, his laboratory integrates whole animal physiology with cellular and molecular biology to benefit both the livestock industry as well as human reproductive health.