Since it was theorised over 150 years ago, physicists have viewed the concept of ‘Maxwell’s demon’ as a highly desirable yet ultimately unattainable source of energy. For over a century, the device seemed to work theoretically, but a fundamental barrier prevented it from being realised: the second law of thermodynamics. Unperturbed, a team of physicists including Dr Gernot Schaller at the Technical University of Berlin have shown that Maxwell’s demon can be practically implemented when the second law is extended. Their findings may help to improve the performance of quantum heat engines.

In 1867, Scottish physicist James Clerk Maxwell, regarded by many as the founding father of electromagnetism, proposed a puzzling thought experiment. In a letter, he described an intelligent device in a box that could sort particles of gas into two separate cavities: one for cold, slow-moving particles, and the other for hot, fast-moving particles.

‘Maxwell’s demon’, as the device came to be known, operated by intuitively opening up a hole between the cavities, which allowed fast-moving particles in the cold cavity to move into the hot cavity, and vice versa – increasing the temperature difference between the cavities over time. Perplexingly, Maxwell showed that the demon wouldn’t require any work to open and close the hole under ideal conditions. However, beyond this reasoning, the demon faced an immediate problem.

The second law of thermodynamics states that when a system of particles undergoes a process, the overall order of the system cannot increase. In other words, the level of disorder, or ‘entropy’, can only become greater. Interacting with a gas should, therefore, make the behaviour of its particles more chaotic, yet Maxwell’s demon appeared to do the exact opposite. A gas separated into its hot and cold constituent particles would clearly be more ordered than before it interacted with the demon. Importantly, a heat engine could extract useful work from this thermal gradient.

The apparent violation of the second law was a subject of debate for decades until 1961, when German-American physicist Rolf Landauer proposed how Maxwell’s demon could operate without decreasing the entropy. He suggested that a periodically operating demon must – after processing each particle – delete information from its memory. This would ultimately increase the net entropy of the overall system and resolve the contradiction with the second law.

From this theoretical basis, a team of researchers including Dr Gernot Schaller and his colleagues at the Technical University of Berlin have proposed to implement Maxwell’s demon in real life, and aim to use the device to improve practical energy generators. 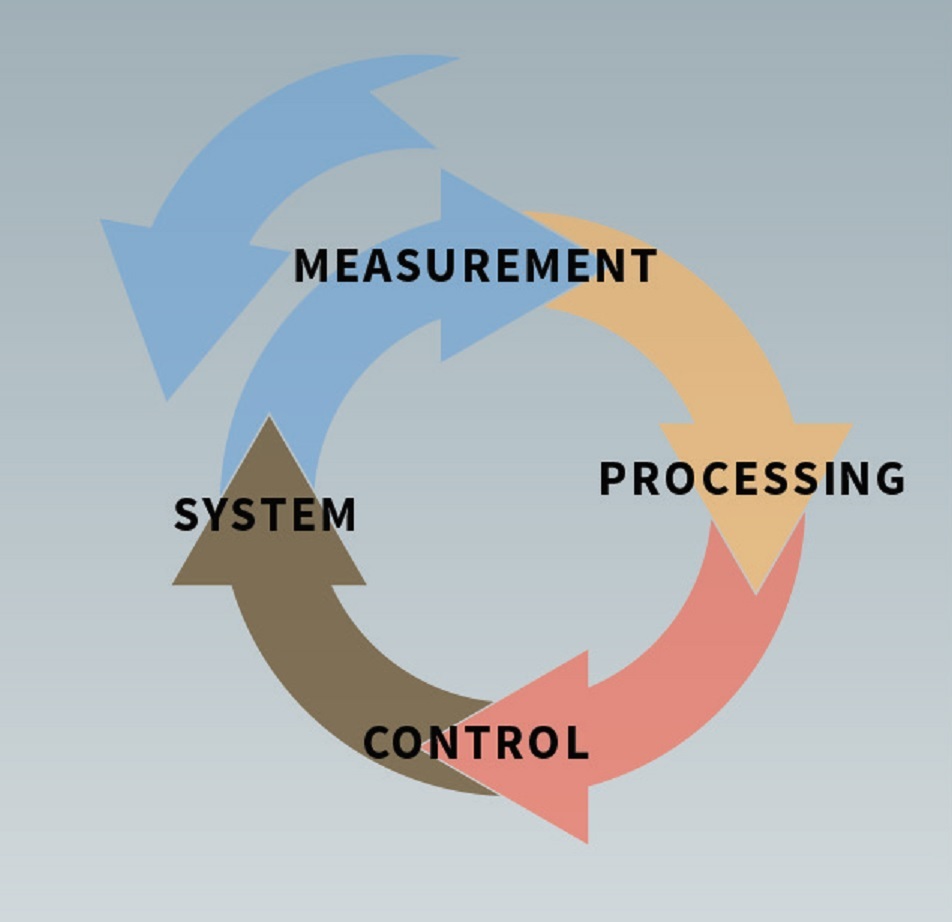 Ways to Build a Demon

In 2011, the Berlin researchers – at that time led by Professor Tobias Brandes – suggested how Maxwell’s demon could take the form of a device called a ‘quantum dot’ coupled to two electronic leads. Consisting of a semiconductor made from just a few hundred atoms, the dot could effectively act as a ‘feedback-controlled single-electron transistor’, deciding on which particles are allowed through to the other lead. In this setup, the leads are at the same finite temperature, which leads to slow fluctuations of the charge of the dot. However, the potential of the leads is different, such that the demon directly generates electric power by driving electrons against a bias.

At the start of the process, the demon makes a measurement of the dot with a charge detector, deciding whether it is empty or filled. Depending on the outcome of the measurement, the demon opens a hole either in the left or the right wall to perform the sorting operation. When the information gained by the measurements is taken into account properly, the second law is not violated. However, to perform this operation automatically, the research team noted that they needed a further degree of complexity in their theoretical setup.

To make use of the state of the second quantum dot, the team, backed up by Dr Philipp Strasberg and Dr Massimiliano Esposito, proposed a devious trick. The second quantum dot would be connected to a third thermal lead – itself entirely separate from the leads connected to the first quantum dot. In line with Landauer’s principle, the memory of the demon, which allowed it to perform the feedback loop, is thereby the single bit of information stored in the second dot, and its deletion is directly connected to the dissipation of heat into the third thermal lead.

Although entropy increased in the system as a whole, nonequilibrium quantum effects could be smartly exploited to ‘delete’ the demon’s memory after every decision. Using an autonomously operating microscopic model, the researchers demonstrated that the second law was globally valid without the need to invoke Landauer’s principle. 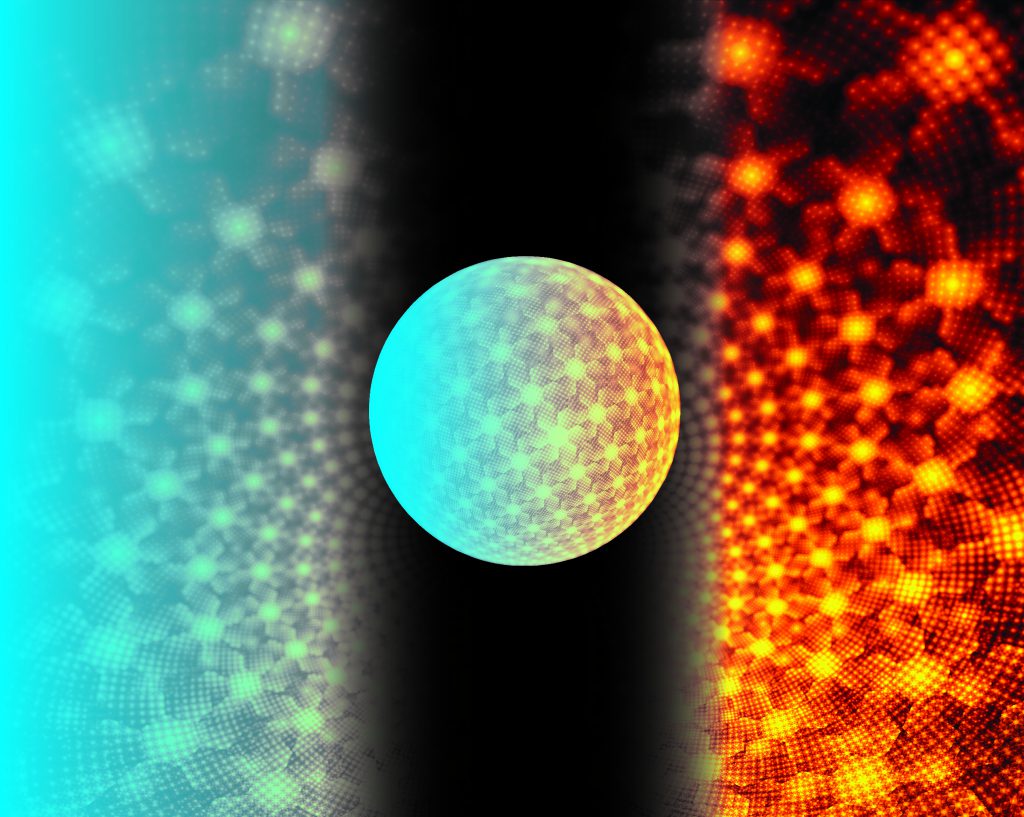 In reality, the situation where the demon ‘opens up a hole between the two cavities’ is more complex than this initial description. For the system to work, the central dot and the lead would be entirely separate from each other in a classical sense. In fact, the ‘hole’ represents how the electron continuously ‘tunnels’ between the dot and lead – travelling through a barrier instead of jumping over it.

In presence of a thermal gradient between the third lead and the two original leads, this quantum tunnelling induces a spontaneous electric current across the single-electron transistor. Since the two quantum dots are interacting with each other, the occupation of the demon dot will equilibrate depending on the occupation of the first dot. For appropriate parameters, this in turn will back-act on the current induced in the device, creating a closed feedback loop between the two contacts.

The Berlin team derived the equations needed to describe this feedback loop, giving them an idea of how tunnelling rates could be modified to optimise the power generated by the demon. In 2015, a corresponding autonomous demon was experimentally implemented by researchers from Aalto university in Finland.

Such autonomous devices have the disadvantage that they always follow the same feedback protocol and thereby achieve the same function. In contrast, Maxwell’s original demon could in principle also change its mind and sort the particles the other way. Therefore, it was still an open question whether the 2011 proposal could be implemented with an external feedback loop.

Inspired by these advances, a team led by Dr Akira Fujiwara at the NTT Basic Research Laboratories in Japan aimed to create Maxwell’s demon, and use it to convert the free energy it generates into work that acts on its surroundings.

In their 2017 experiment, Dr Fujiwara’s team followed an approach similar to the 2011 theoretical study proposed by the Berlin researchers. They demonstrated that information can be used to control the electric current through an artificial quantum dot. Moreover, the device was capable of generating electric current and power from information. Through numerical calculations, the Japanese researchers showed that power generation could be increased by miniaturising the cavity space within which electrons are confined.

These concepts work well when the opening or closing of a shutter does not cost relative amounts of energy and if the feedback loop is slower than the electronic equilibration time in the leads. To go beyond these limitations, Dr Schaller and Dr Georg Engelhardt at the Technical University of Berlin investigated what would happen when charge measurements were performed at an infinite rate.

The duo used a ‘dynamical coarse-graining’ method, which allowed them to reach the non-Markovian regime – where the evolution of the system at a given point in time not only depends on a snapshot at that time, but requires knowledge of all previous times. They discovered an optimal feedback protocol, where as much energy was extracted from the feedback loop as possible. In addition, they found that the Quantum Zeno effect (a feature whereby a quantum particle’s movement is arrested by frequently taking measurements of it) would ultimately limit the output power by freezing the system.

Through years of research, the team and their collaborators have gained an in-depth understanding of how Maxwell’s demon can be used to extract energy from a variety of quantum systems. Yet until now, many issues have remained – for example, whether these insights can be used to improve the design of quantum heat engines. In thermodynamics, heat engines on macroscopic scales are incredibly important. On a quantum scale, however, their performance so is far too poor to be of practical relevance.

Unlike other quantum devices, such as quantum computers, which require complete isolation from their surrounding environments, Maxwell’s demon actually needs to interact with its surroundings.

In the future, the team hopes that further fine-tuning of the quantum characteristics of the demon will allow for hugely efficient devices that extract useful energy from the heat of individual particles. For a concept that seemed to defy a fundamental physical law just a few decades ago, the practical uses of Maxwell’s demon seem to have an incredibly promising future. 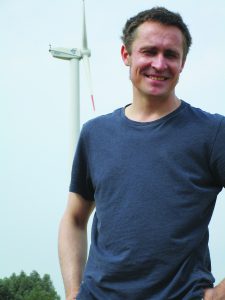 Gernot completed his PhD in Physics at Frankfurt University in 2006, after which he worked as a postdoctoral researcher in the field of Theoretical Physics at Technical University Dresden and Technical University Berlin. He is now a visiting professor in Computer-aided Material Physics at this university. His major research focus includes the dynamics of quantum systems far from equilibrium, in particular quantum transport. He is specifically interested in advancing concepts and methods.