As we move towards a sustainable future, there is a growing interest in marine renewable energy technologies such as marine hydrokinetic devices and offshore wind turbines. However, the viability of these technologies and the potential environmental effects associated with their implementation needs to be established. Scientists Dr Craig Jones and Dr Grace Chang, from Integral Consulting Incorporated, USA, are working towards this goal. 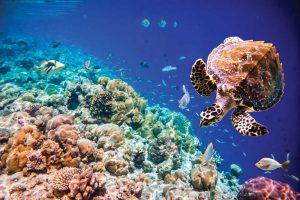 The Earth is currently undergoing significant environmental and climatic change, and the negative impacts of our collective behaviour and lifestyle choices are becoming more apparent. Indeed, recent developments and unfolding ecological crises have highlighted the need to reassess the way we source and use energy. Therefore, sustainable and environmentally friendly energy resources and technologies are of primary concern to scientists and engineers around the globe.

One such area of technology development is in marine hydrokinetic energy, which harnesses the energy of moving water. Wave energy converters (WECs) and current energy converters, for example, are types of marine hydrokinetic energy devices that capture the kinetic energy of waves and tides and currents, respectively. Another marine renewable energy technology is offshore wind generation systems. Energy from these technologies is cleanly converted into electricity, which can be fed into the grid for the benefit of citizens.

However, each technology brings with it a whole new set of challenges. For example, the potential environmental effects associated with installation, maintenance and operation of WECs need to be established, as do the economic impacts. Gathering this information is crucial in ascertaining whether this technology is truly viable.

In fact, one of the first pilot-scale WEC deployment programs in the US was deemed unviable due to the costs and delays associated with acquiring permission to put the devices in the water. Subsequently, it was identified that the processes surrounding WEC implementation, and the management of environmental concerns, needed to be streamlined so that regulators would be more confident that the technology is indeed a suitable, low-impact solution.

Physical and biogeochemical oceanographer Dr Grace Chang, and ocean and environmental engineer Dr Craig Jones, of Integral Consulting Incorporated have teamed up to tackle this challenge – bringing together their knowledge, insight and expertise. The team, comprising Integral Consulting Incorporated and Sandia National Laboratories, is supported by the US Department of Energy Office of Energy Efficiency and Renewable Energy (US DOE EERE) to research the potential effects of marine renewable energy technologies on the environment; specifically, on the ocean floor and coastal landscapes. This research can then inform and expedite the environmentally responsible implementation of these technologies. 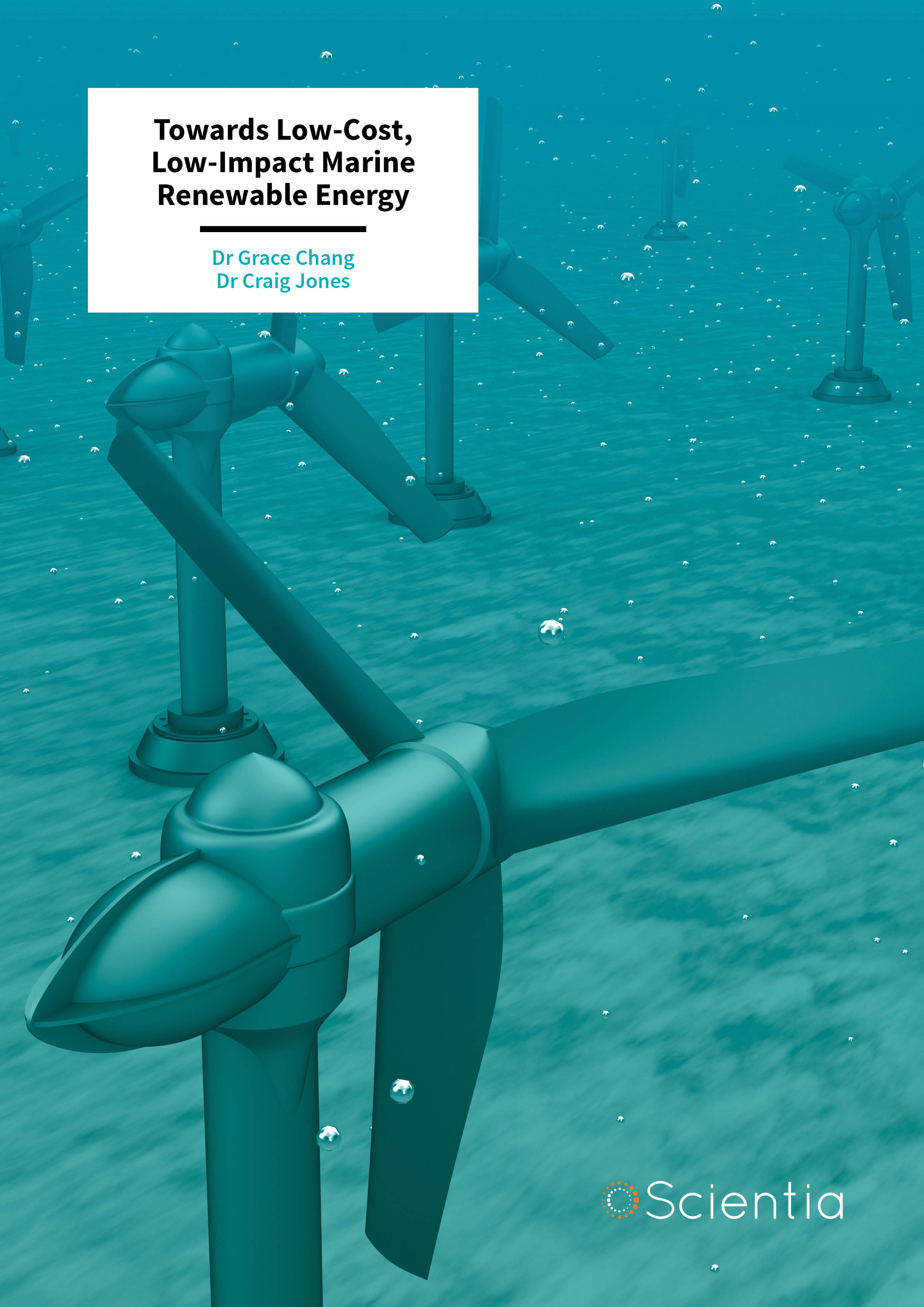 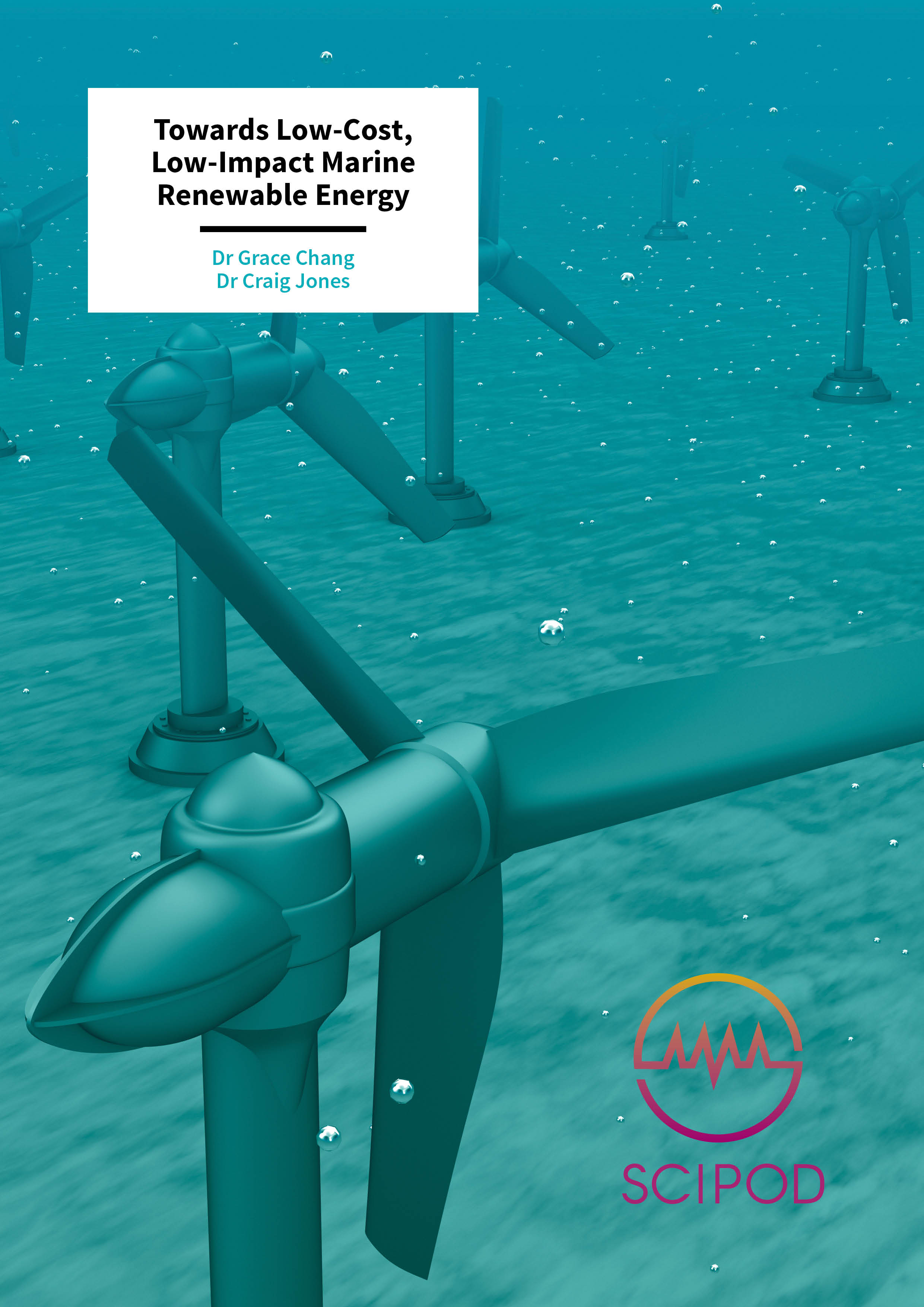 The Effect of WECs on Wave Propagation

In a research project started in 2009, Dr Chang and Dr Jones aimed to understand the effects of WECs on nearshore wave propagation. In other words, their goal was to determine whether WEC devices would have a significant impact on the size of waves travelling towards the shoreline. This understanding is vital, as large arrays of WEC devices have the potential to adversely affect the local environment by altering normal circulation patterns, sediment mobility, and other ecosystem processes.

For this project, the team used a modified version of a standard wave model to simulate wave propagation through a hypothetical WEC array deployment of ten devices on the Californian coast. They simulated a number of realistic experimental conditions derived from real-world wave measurements in the model domain and made detailed comparisons between model results for ‘average’ (north-westerly waves) and ‘south-swell’ conditions. WEC effects were quantified by looking at wave parameters with and without devices deployed in the wave simulation zone. 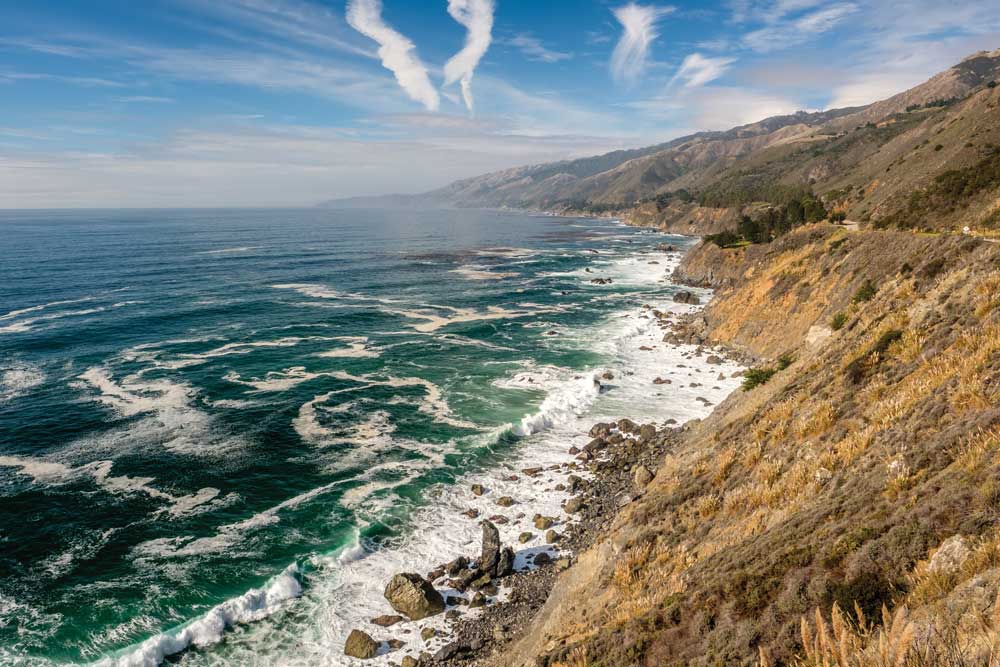 The team found that the presence of the ten WECs had little to no effect on the height of waves under average conditions. While they found that wave height decreased by approximately 30% in south-swell conditions, the effects decreased substantially towards the shoreline to approximately 5%. The results indicated that WEC deployment does have the potential to affect natural processes, but potential impacts to the local ecology needed to be evaluated.

Dr Chang and Dr Jones then re-visited this experimental design in 2015. This time, they investigated the near- and far-field effects of device size and deployment layout patterns on wave propagation. The team found that, depending on the type of WEC, large arrays WECs did indeed influence wave propagation to varying degrees. However, the question still remained as to what effect these changes in wave propagation could have on coastal structures, processes and ecosystems, and whether it is a cause for concern. 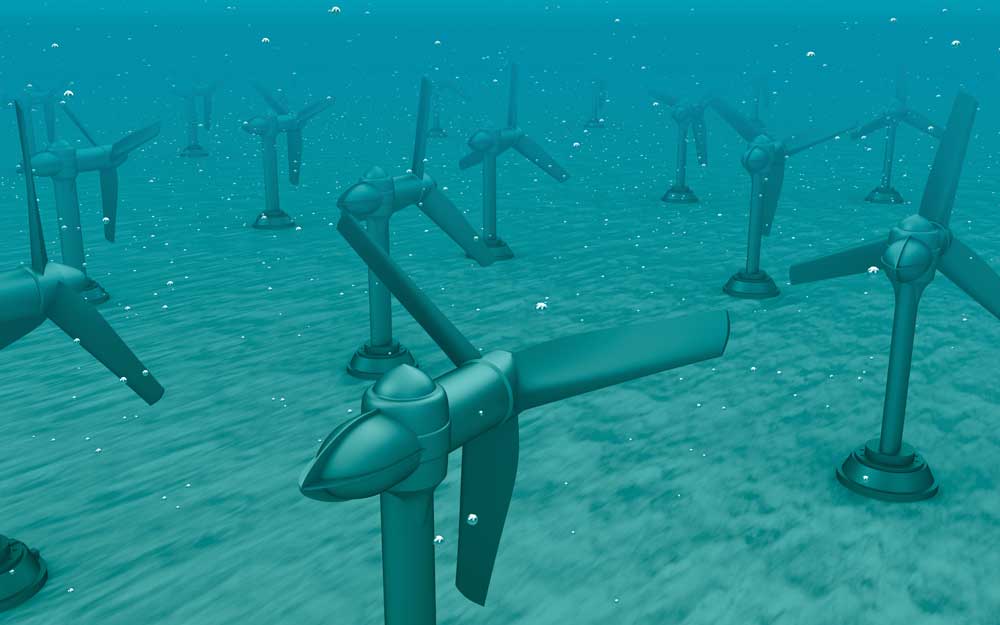 Ecological systems are sensitive to change in the physical environment. Therefore, changes in wave propagation could have a significant effect on local environments near the WEC deployment zone. For example, changes in the way waves move and distribute sediments may alter seafloor habitats. Changes in currents and circulation patterns have the potential to affect water quality and thus the behaviour of marine species.

Dr Jones and his team set up another case study in Newport, Oregon – a site that has supported and will continue to support WEC deployments. In this case study, the 18 WECs were laid out in a 50 m x 50 m grid, and the team’s focus was on the effect on wave propagation during a moderate southerly swell and a moderate western wave event. The research team obtained the best available seafloor and ocean depth data at the test site from Oregon State University for comparative purposes.

Dr Jones and his team found that, as explained in their research paper, ‘the alterations of wave heights, orbital velocities at the bed, and radiation shear stress in the lee of a WEC deployment do exhibit changes that could result in an environmental stressor.’ However, to establish the true environmental impact of these changes, the data would need to be compared with datasets collected by other scientists assessing other physical and biotic parameters. For example, data on mid-water trawl fishing near the Newport site are readily available. A comparison of data sets could be used to ascertain whether the changes in wave propagation, circulation, sediment transport, and water quality affect the population densities of certain fish. However, initial results of these and similar studies show negligible environmental impacts for the small pilot scale WEC deployments.

According to research by Dr Jones and his team, ‘the offshore wind energy market has made large strides globally and is presently proving its viability. As the technology improves and the ability to deploy offshore wind turbines in deeper waters becomes increasingly feasible, developers and the government are continuing to find ways to expand the offshore wind market.’

However, there are challenges associated with offshore wind systems, which ultimately influence implementation cost and viability. One of these is in regard to the installation process, as it requires seafloor foundations, cabling, floating structures with gravity anchors, or a combination of several of these systems. The installation and presence of these structures may affect the integrity of the sediment bed or the way in which sediments are transported and deposited in near-shore coastal regions. This could have a significant impact on the local environment and ecosystems. So, in addition to the costs associated with construction, there is significant expenditure associated with acquiring permission from governmental authorities to build the systems.

In work funded by Sandia National Laboratories and the US DOE EERE, Dr Jones and colleagues from Integral Consulting carried out a study that examined the effects of offshore wind sub-sea foundations and cables on sediment transport. Their study also evaluated the potential risks associated with these alterations. Specifically, Dr Jones and his team developed modelling tools and techniques for developing maps indicating potential changes in seabed stability after the installation of offshore wind infrastructure.

In summary, Dr Jones found that the presence of offshore wind structures reduces the sediment transport in the sheltered area of the deployment zone by altering current and wave fields. In a sense, this was no surprise to Dr Jones – he had observed a similar effect in his study of the impact of WECs on wave propagation. However, the methods for developing maps that the team produced, which outline the potential seafloor erosion, or scouring zones, provide developers with valuable planning, design, and evaluation tools for the siting and development of offshore wind power systems.

Informing and Training Regulators and Developers

Dr Chang and Dr Jones want to use their research to inform regulators and train developers who are involved with the design and implementation of marine renewable energy systems. When asked about their future work, Dr Chang commented: ‘we will engage with regulators and developers to participate in hands-on tutorials to learn the tools and techniques developed to understand the potential environmental effects of marine energy generation.’

Of course, the work of Dr Chang and Dr Jones aims to preserve and protect the environment as best as possible, whilst utilising the abundant potential of marine renewable energy systems. And they also seek to improve the efficiency of the installation and construction process. As humankind pushes towards a more sustainable future, their work is certainly of great assistance in improving sustainable energy technology and reaching our renewable energy targets. 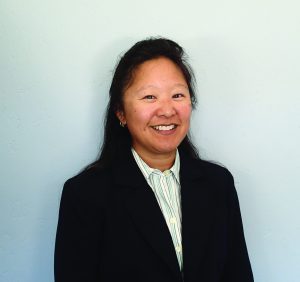 Dr Grace Chang received her PhD in Marine Science from the University of California, Santa Barbara, in 1999. Her research pursuits have been in the fields of hydrodynamics, sediment transport, particle dynamics, and marine and hydrokinetic energy. She has managed programs involving field operations, data processing and analysis, numerical modelling for environmental characterisation, observational monitoring, scientific research, and the development of various technologies. She now serves as a Senior Consultant at Integral Consulting Incorporated and has more than 20 years of experience in long-term ocean monitoring and site assessments. 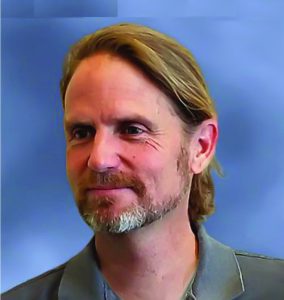 Dr Craig Jones received his PhD in Mechanical and Environmental Engineering from the University of California, Santa Barbara, in 2000. He has since been involved in several research projects in the fields of riverine, lacustrine, estuarine and coastal hydrodynamics, wave propagation and sediment transport. He is skilled in the predictive modelling of physical processes involving extreme events, change analysis, and environmental risk assessment. He currently serves as principal ocean and environmental engineer at Integral Consulting Incorporated and has 20 years of experience in developing study programs for government agencies and the private sector for the characterisation of marine sites.

US Department of Energy Office of Energy Efficiency and Renewable Energy