May 1, 2017Astronomy and Planetary Science, Earth and Environment, Physical Science

Atmospheric physicist Dr Jian Du-Caines at the University of Louisville and her colleagues explore the interactions between Earth’s atmosphere and near Earth space to better predict space weather that can adversely affect life on Earth.

Everyone Talks About the Weather

Our weather – our Earth’s weather – is always a topic of conversation. Of course, parents are worried about the weather when dressing their children for school. And polite conversation often devolves to ‘how about this weather?’ when awkward silence occurs. But what about space weather – does anyone talk about that? Who even knows what space weather is? As it turns out, space weather is vitally important to our way of life, particularly in technologically advanced societies. Our communication systems, travel and even national security can be affected by it.

The solar wind – massive amounts of ionised particles emitted from the sun and other solar eruptions – bombards the Earth’s atmosphere daily. These particles interact with the Earth’s magnetic field and produce numerous phenomena, such as the aurora borealis and aurora australis. They can also cause significant interruptions in the electric power industry, commercial aviation, GPS applications, satellites, and space flight. The solar wind’s interaction with the Earth’s thermosphere and ionosphere leads to the variable conditions in near-Earth space that we call ‘space weather’.
Unfortunately, our capability to predict space weather is on the same level as surface weather forecasting was around 50 years ago. We can predict severe space weather events, but only with minimal lead-time. Scientists – space weather forecasters – lack real-time data and only have limited weather model capabilities. This is where Dr Jian Du-Caines at the Louisville Atmospheric Science Program and her colleagues are concentrating their efforts. According to Dr Du-Caines, ‘the big picture of our research is to study how the dynamics in the lower atmosphere impacts space weather variability and prediction.’

In other words, they are studying how the Earth’s atmosphere interacts with near-Earth space dynamics in an effort to better predict space weather, allowing us to protect our technology and health from the effects of space weather. This branch of meteorological science and atmospheric physics is called Aeronomy. 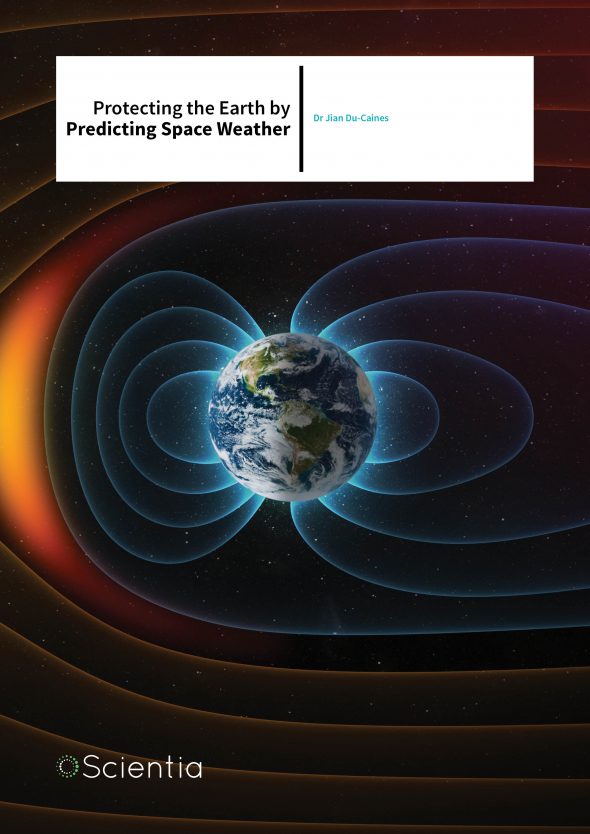 ‘My main goal in the next five years in research is to better understand the temporal variability of atmospheric tides, especially their short-term variability, to better our space weather forecast capabilities, to publish high impact research results, and to train the next generation of researchers in Aeronomy.’ 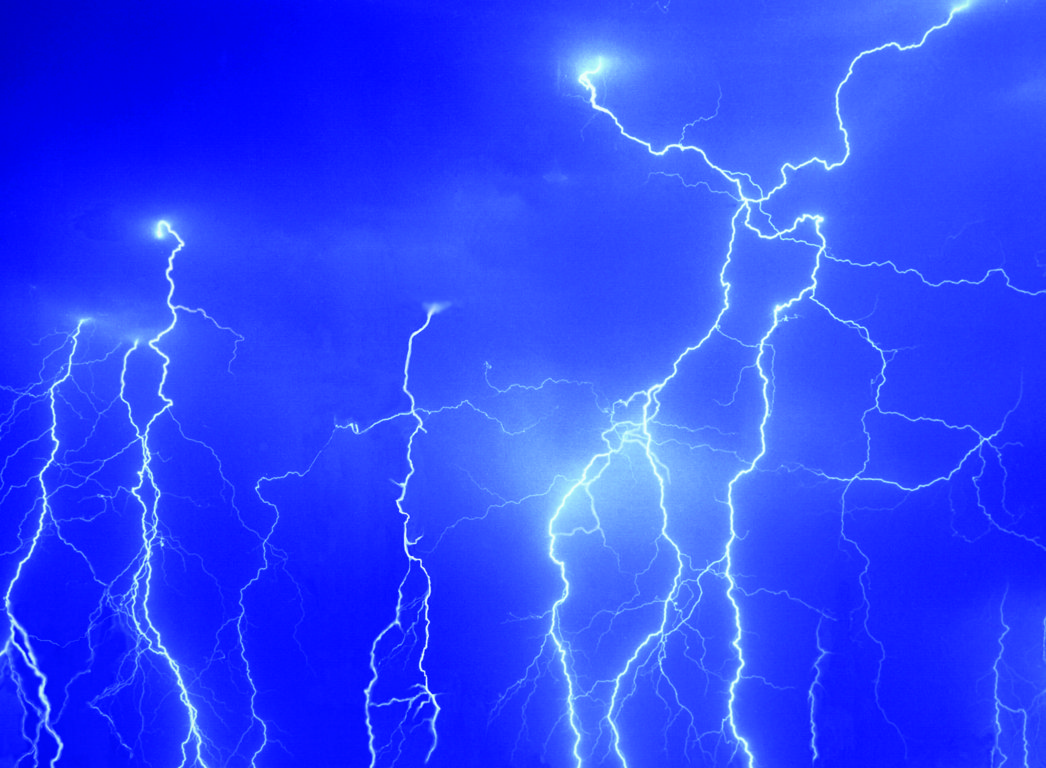 Understanding Weather on Earth to Predict Weather in Space

Usually, episodes of severe space weather occur when Earth is bombarded by the coronal mass ejections or solar flares. However, what most people don’t realise is that the daily variability of space weather during quiet times can be markedly affected by the dynamics of the lower atmosphere. Specifically, such energy generators as atmospheric tides, planetary waves, and gravity waves that primarily arise in the lower atmosphere can transfer energy and momentum to the middle and upper atmosphere.

Currently, scientists estimate that these waves emerging from the lower atmosphere transfer about the same amount of energy to the upper atmosphere as that which comes from space during quiet geomagnetic conditions and medium solar conditions. ‘Accurate day-to-day forecasting of space weather requires a better understanding of the temporal and spatial variability of these waves,’ explains Dr Du-Caines. We need to know what the effects from these waves are in the ionosphere and thermosphere to be able to predict space weather, since about half of the driving force behind space weather comes from the lower atmosphere. For nearly a decade, Dr Du-Caines and her colleagues have made some important contributions to our understanding of the dynamics of the middle and upper atmosphere, particularly as it relates to atmospheric tides.

The Changing of the Tides

Atmospheric tides are global-scale periodic oscillations in temperature, density and wind, somewhat analogous to ocean tides. Atmospheric tides are driven by multiple forces, such as the daily solar heating of the atmosphere, the gravitational pull of the moon, interactions with planetary waves and convection heating in the tropics. Atmospheric tidal periods are integral fractions of a solar or lunar day, and can vary at different time scales, from short periods of a few days to longer periods of several months or years. In addition, atmospheric tides can have both migrating and nonmigrating tidal components.

Migrating tides propagate westwards around the Earth at the same speed as the apparent motion of the Sun. These tides are generated when energy from the sun causes excitation in the troposphere and stratosphere, and therefore follow the Sun as it moves, from Earth’s standpoint, across the sky. The migrating tidal component should have the same amplitude along longitudes if measured at the same local time and latitude.

In contrast, non-migrating tides propagate either faster or slower than the apparent motion of the Sun and may travel westward, eastward or even remain stationary. Dr DuCaines says that ‘the scientific community had held the misconception that migrating tides have much stronger amplitudes than non-migrating tides, and believed that nonmigrating tides have a negligible contribution to the overall tidal field.’ This misconception led ground-based observers to believe that their tidal fields should be the same as long as they are observed at the same latitude. Dr Du-Caines and her colleagues proved this not to be the case in a series of studies they published over a period of seven years. 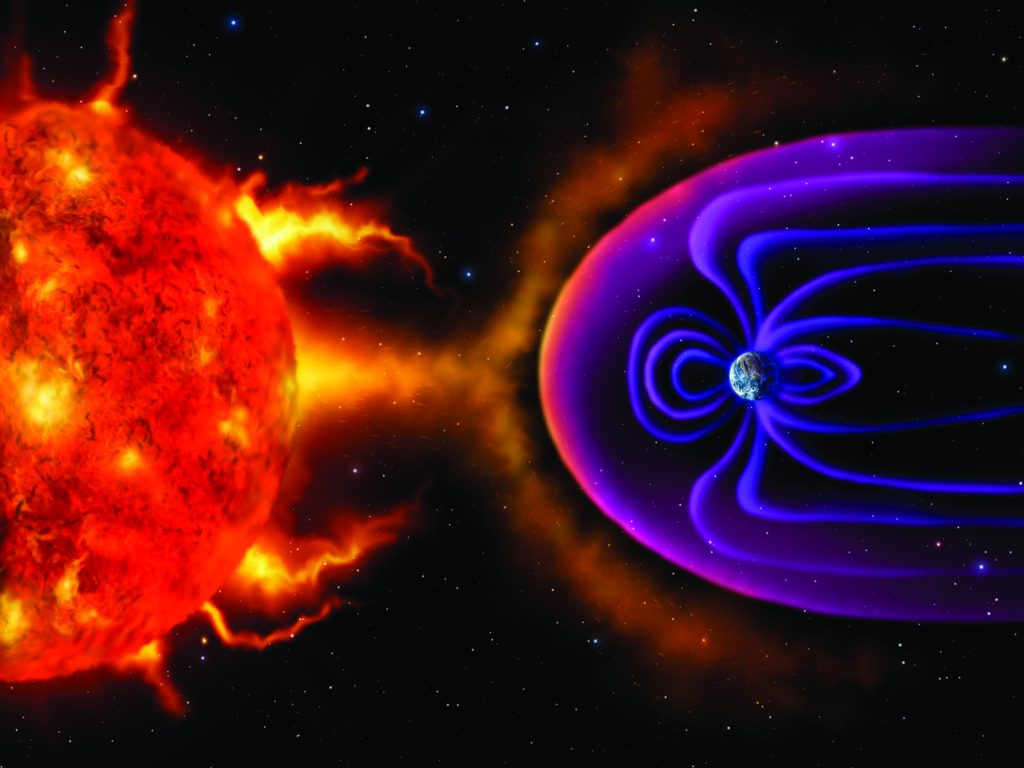 Writing on the Atmospheric Tides – Spatial and Temporal Variability

In 2007, the team published a paper in the Journal of Atmospheric and Solar-Terrestrial Physics that investigated the capability of an atmospheric model called the extended Canadian Middle Atmospheric Model (eCMAM). Using this model, the team studied migrating and non-migrating semidiurnal tides – tides that have a period of 12 hours. They simulated the atmosphere from the Earth’s surface to a height of 210 km, while accounting for radiative heating, convective adjustment and latent heat release, as well as gravity-wave effects. They then compared their calculated results with real data from NASA satellites and ground radar stations in Jakarta and Kototabang, Indonesia. This was the first time that anyone had compared results from eCMAM with real ground and satellite measurements on atmospheric tides.

The team realised that the model could be tuned to obtain a closer agreement with real measurements. They found that the migrating semidiurnal tide is dominant at certain latitudes, but at other latitudes, non-migrating tides are stronger. Each tidal component has its own unique latitude-height structure and maximises at different latitudes, heights and times. Ground-based instruments observe a superposition of all the migrating and non-migrating tidal components of the same period. The total tidal fields can be very complicated and have strong geographic and temporal variability. So, the old belief that migrating tides – tides that are regular at the same latitude – were the ‘normal’ state of affairs was incorrect. Measurements would obviously have to be taken at different longitudes to adequately describe the tidal system.

In a paper published in 2010 in the Journal of Geophysical Research: Atmospheres, Dr Du-Caines and her colleague Dr William Ward, of the University of New Brunswick, applied the extended CMAM to a problem not many researchers had addressed before, the terdiurnal tides – tides that cycled every 8 hours, rather than every 12 or 24 hours. They showed the migrating and 10 non-migrating tidal components that varied with the seasons and both types, migrating and nonmigrating, were significant. Once again, the old assumption that only non-migrating tides were significant was contradicted. It was also clear that these shorter period tides, cycling over 8 hours, were every bit as important as 12 and 24 hour tides. In fact, as Dr Du-Caines tells us, ‘with the recent realisation that terdiurnal tides could vary significantly during some extreme atmosphere events, such as the sudden stratospheric warming, and cause space weather perturbations, this fundamental contribution to the study of terdiurnal tide will receive more attention in the years to come.’ Her group – including students – continues to work on this fascinating subset of atmospheric tides. But it doesn’t stop there. 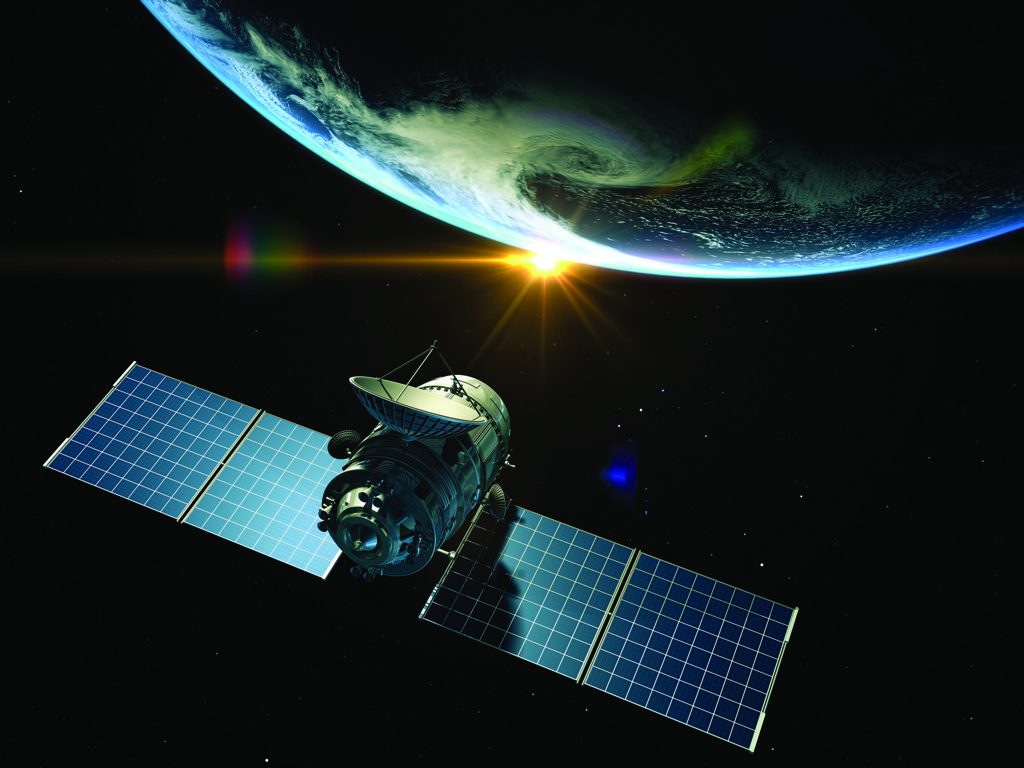 This first look gave some fascinating information that still needs to be correlated with real data from satellites. But the point remains – Dr Du-Caines and her group have done some ground-breaking work towards understanding atmospheric tides, and have dispelled some of the misinformation or misunderstanding that existed before they entered the game. This ground-breaking work also led to the award of a three-year National Science Foundation grant to look at how these atmospheric waves interact in the middle and upper atmosphere and a five-year NSF CAREER award to look at the physical mechanisms behind the inter-annual and seasonal change of the atmospheric tides. She and Dr Jens Oberheide from Clemson University have also been given a grant from NASA to study the short-term tidal variability on the order of a few days and correlate model calculations with NASA satellite data. The tides keep breaking in Dr Du-Caines’ favour, for sure. But she doesn’t restrict herself to simply studying atmospheric tides these days.

Looking Beyond the Tides of Progress and Spreading the Word

However, Dr Du-Caines feels that the transition from the study of seasonal/climatological atmospheric tides to a more big-picture understanding of tidal weather is a must, in order reach a point where we can actually predict space weather. She tells us that her ‘main goal in the next five years in research is to better understand the temporal variability of atmospheric tides, especially their short-term variability, to better our space weather forecast capabilities, to publish high impact research results, and to train the next generation of researchers in Aeronomy.’ 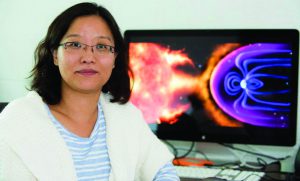 Dr Jian Du-Caines did her undergraduate studies in China, receiving her Bachelor’s degree from the Chengdu Institute of Meteorology in 1999 and her Master’s degree in 2002 from the Lanzhou Institute of Atmospheric Physics. She then pursued graduate work at the University of New Brunswick in Canada, where her dissertation was entitled ‘A mesosphere and lower thermosphere dynamics study using the Extended Canadian Middle Atmospheric Model (CMAM).’ She received her PhD in 2007, followed by three years of postdoctoral work at the University of Cambridge in the UK. In 2011, Dr Du-Caines joined the Atmosphere Science Program in the Department of Physics and Astronomy of the University of Louisville, where she is now a tenuretrack Assistant Professor.
Dr Du-Caines’ research interests broadly cover how weather in the lower atmosphere impacts space weather variability and prediction. Her specific interests include middle-atmosphere energetics, dynamics and tides, the vertical coupling of atmospheric regions, and prediction of space weather. In addition to her research, Dr Du-Caines supervises PhD student research and teaches a number of undergraduate and graduate courses in meteorology, weather analysis and independent study.