Pollination by flying insects is often the forgotten key to high agricultural productivity. Dr Johanne Brunet, research ecologist at the USDA-Agricultural Service, is investigating insect-flower interactions, and their implications for crop production.

Many crop plants are propagated by sexual reproduction, which is often slow and cumbersome as it involves the orchestrated processes of flowering, pollination, fertilisation, seed production and sowing. But sexual reproduction can also promote genetic diversity, leading to crop populations that are more resilient to harsh or changing environmental conditions – such as frost, diseases and pests.

Pollination is a critical step in crop propagation – especially in fruit farming, where the fruits themselves are the product of flower fertilisation. This process involves the transfer of pollen grains from the male part (stamen) to the female part (stigma) of flowers. Upon reaching the stigma, the pollen grain travels down a tube to the ovaries, where fertilisation occurs – the fusion of eggs and pollen – which leads to the production of seeds.

Although many flowering plants rely on the wind to transfer pollen grains, a large proportion of our crops are entirely dependent on insect pollination. The vast majority of fruits and vegetables, especially when one considers seed production, are pollinated by insects. But how do plants get flying insects to act as pollen delivery agents? Flowers produce pollen and nectar, which act as food for flying insects. When insects fly from flower to flower, collecting nectar or pollen, pollen attaches to their bodies, and is then transferred between flowers.

Bees are the most common managed agricultural pollinators, especially honeybees, although the use of solitary bee species is on the rise. Bumblebees and several other wild bee species can also play an important role in the pollination of certain crops. Unfortunately, populations of wild and managed bees are steadily declining – with worrying implications for global agriculture. 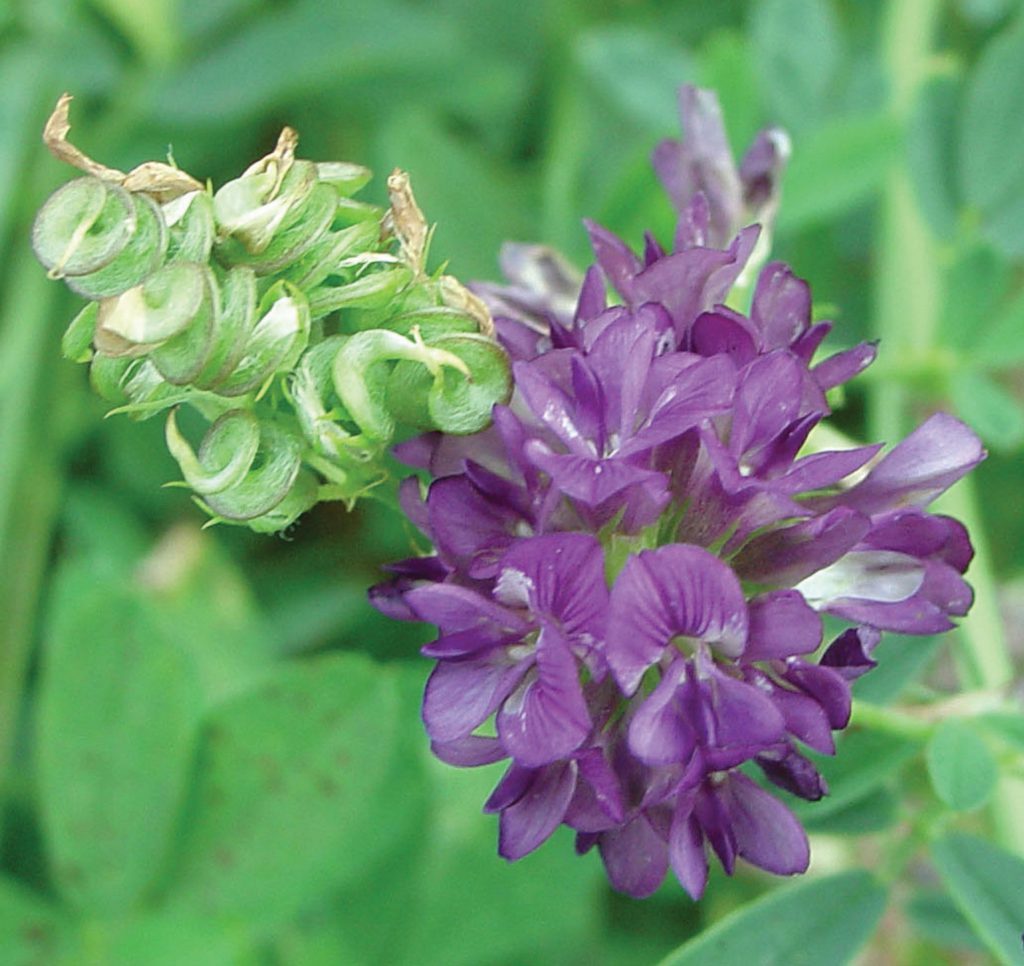 Destruction of wild habitats has had devastating impacts on wild bee populations. Honeybees, the most commonly used managed pollinator in agriculture, are suffering from ‘colony collapse disorder’ – whereby worker bees do not return to the hive. The lack of workers results in the death of the colony as the young are no longer cared for. Many factors, including stress and disease, appear to be responsible for this collapse. Moreover, the application of broad-spectrum insecticides to crops, such as neonicotinoids, can also negatively impact both wild and managed bee populations. It is clear that bee conservation must be prioritised, as the loss of bees would be devastating to our global food supply.

The pollinator-flower mutualistic interaction that plays out in crop pollination has massive ramifications for human food supply. This interaction is more complex than we might think, and scientists have made great strides in understanding it. Yet, much of this still remains shrouded in mystery. Elucidating some of these mysterious details is part of Professor Johanne Brunet’s research goals. Flowering plants – known as angiosperms – are thought to have emerged 120 million years ago. Since then, the evolution of angiosperms and insects has been inextricably linked, and this ancient mutualism has driven profound changes in both. Professor Brunet and her group are investigating this complex mutualism between plants and their pollinators.

Flowers are effectively giant advertising displays to entice passing flyers. Among flowering plants there is extraordinary diversity in floral display, shape and colour – features that are important in attracting pollinators. Even within a population, there can be great variation in flower colour and the size of floral displays.

Although honeybees and bumblebees exist as part of highly organised colonies, they exhibit individualistic and complex learned behaviours. They can learn to associate a flower colour with nectar or pollen payoffs. When nectar or pollen payoffs are similar between different flower colours in a population, bees often modify their innate colour preferences. Bees’ preferences for flower colour and morphology have been a lively research theme for Professor Brunet’s group.

A Bee’s-Eye View of the Alfalfa Agroecosystem

Professor Brunet and her team currently investigate these bee-flower interactions in alfalfa. Alfalfa is a perennial forage crop used to feed livestock for grazing, hay and silage. As it is a legume, the crop is able to convert nitrogen in the air into soluble nitrates or ammonia, helping to maintain soil fertility. For Professor Brunet, alfalfa is an ideal model species for investigating pollinator-flower interactions, as it is highly dependent on insect pollination for seed production. Also, the plants exhibit varying numbers of flowering stems, racemes (clusters of flowers) per stem and flowers per raceme – creating a large variation in floral display size, and thus great variation in food rewards for the bees. There is also great variation in flower colour – ranging from shades of purple to white to yellow. 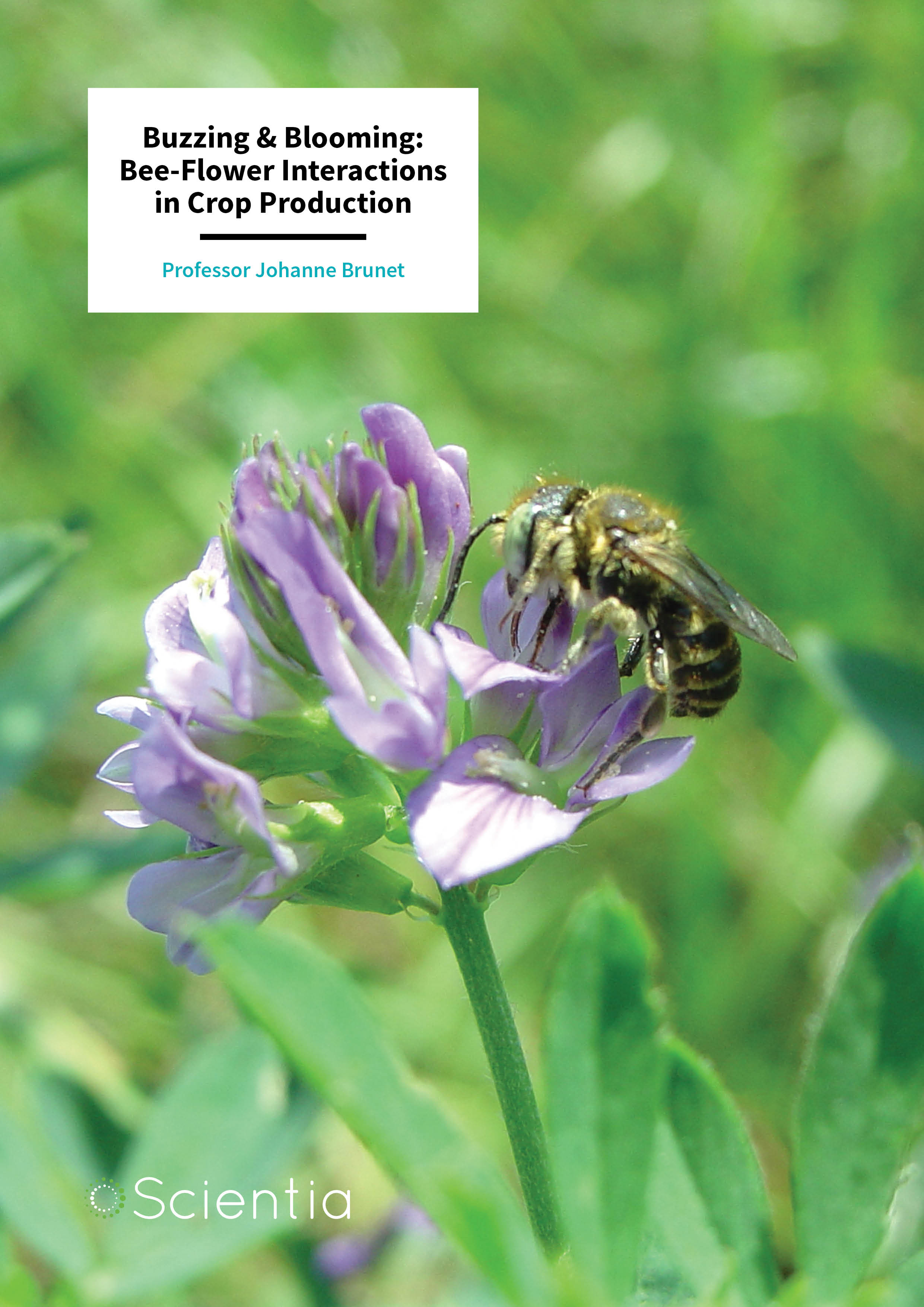 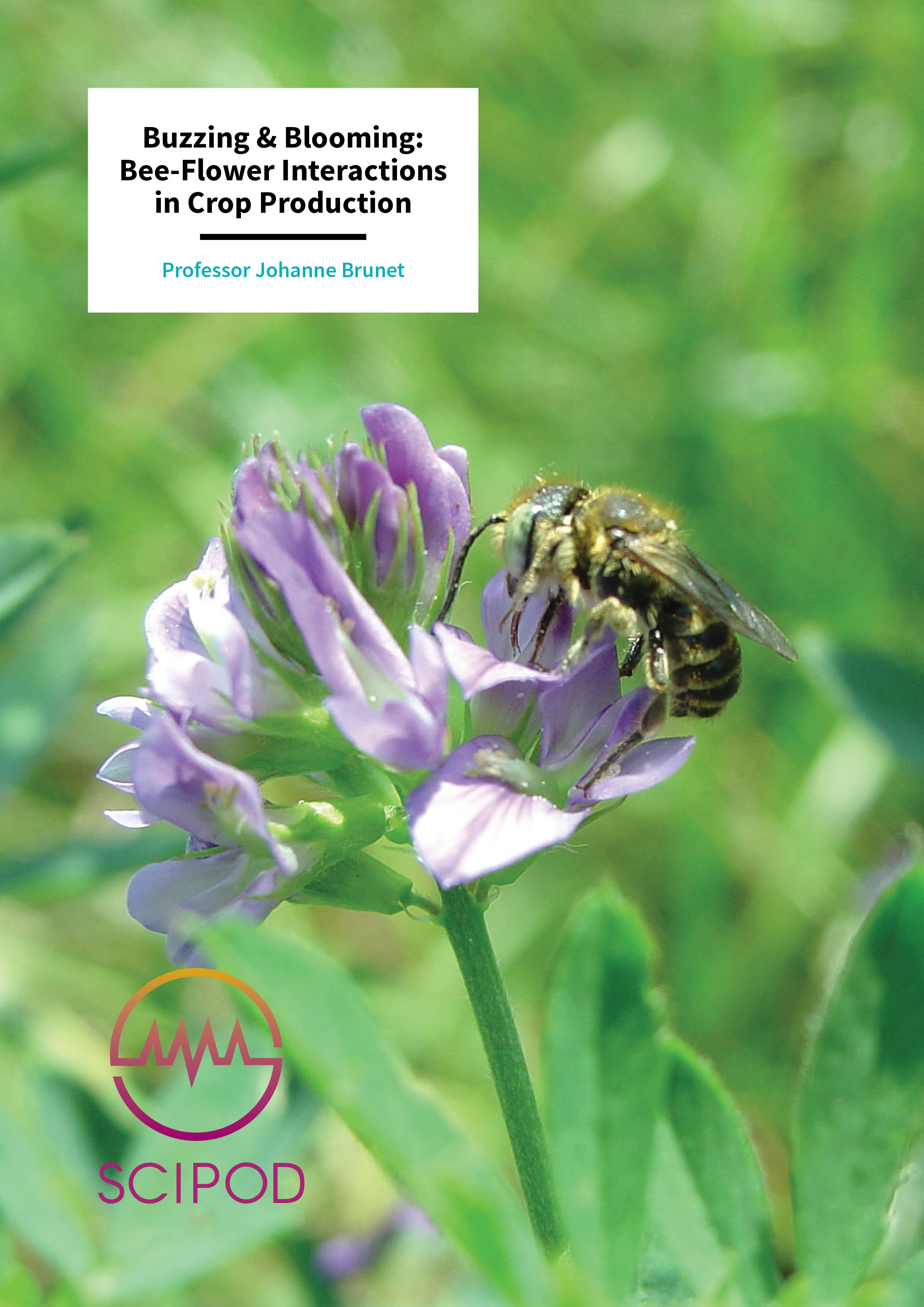 The research team carries out many of their field studies at the West Madison Agricultural Research Station in the heart of Wisconsin’s alfalfa territory. For their field studies, the team germinates alfalfa seeds in the greenhouse before transplanting the seedlings in the field. The group seeks to obtain a ‘bee’s eye view’ of the alfalfa agroecosystem. A large component of their research involves stalking bees in the field and observing their foraging behaviour – from a distance to avoid confounding the bees’ natural behaviour. They study visitations from three different bee species – the European honeybee, alfalfa leaf-cutting bee and common eastern bumblebee. 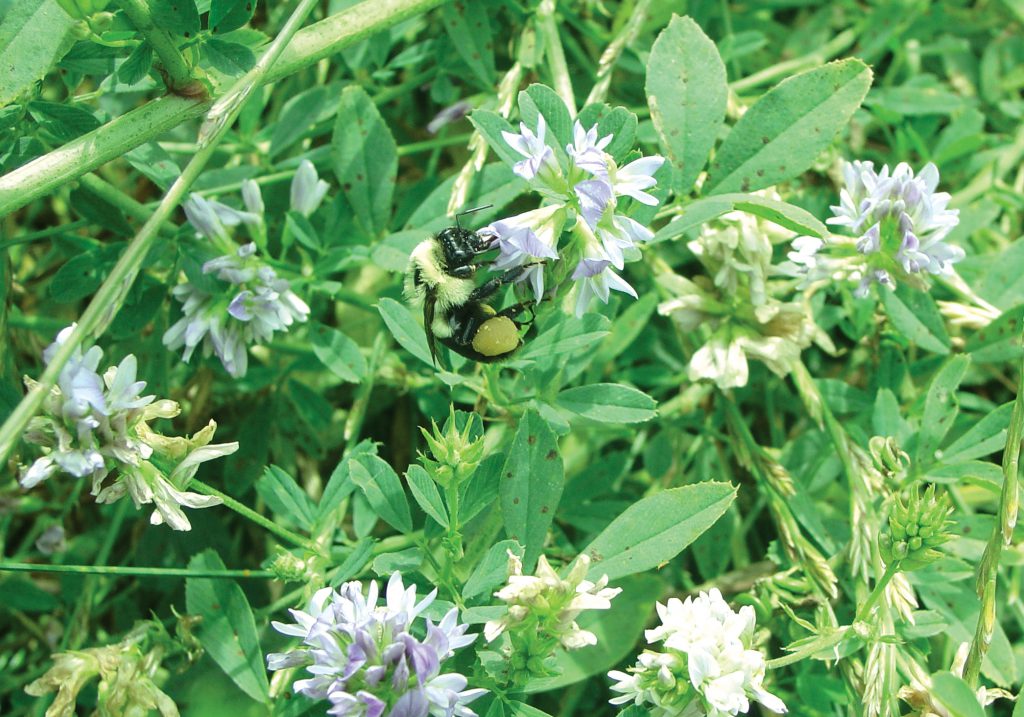 The group meticulously records the floral characteristics of each alfalfa plant – no easy feat – and over a fortnight at peak-bloom, they wait for foraging bees. When a bee is spotted in a field, the plants it lands on are recorded, as well as the number of racemes per plant, and the number of flowers per raceme visited by the bee. Six weeks later, they collect seeds on the plants. The team then runs the data from these field observations through powerful statistical models, allowing them to gain deep insights into the relationship between the flowers’ attractiveness to bees and the alfalfa crops’ reproductive success.

The findings of their field studies have been insightful. They found that plants with larger floral displays received more bee visits, and this was true for all three bee species. Flower colour affected the number of visits from bumblebees and honeybees, but not leaf-cutting bees. Interestingly, honeybees changed their preference of flower colour from one year to the next. The team speculates that honeybees’ high levels of bee-to-bee communication and strong learning abilities could help explain such switch in colour preference. The team also revealed a correlation between bee visits and alfalfa seed production – attesting to the importance of bees as crop pollinators – with leaf-cutting bees being the most effective pollinators, followed by bumblebees, and lastly honeybees.

‘An important research area in the laboratory examines the link between pollinator foraging behaviour and gene flow,’ states Professor Brunet. ‘We are interested in the patterns of bee movement from flower to flower, from plant to plant and from field to field and the accompanying pattern of pollen movement as the pollen is moved by the bees,’ she says. When the pollen and egg fuse together in fertilisation, the offspring plant will inherit genes from both parents. Therefore, the transfer of pollen grains, clinging to the hairs of a flying bee’s body, from flower to flower, moves genes over the landscape. When a seed is produced following pollen transfer between flowers, a ‘gene flow’ event has occurred. 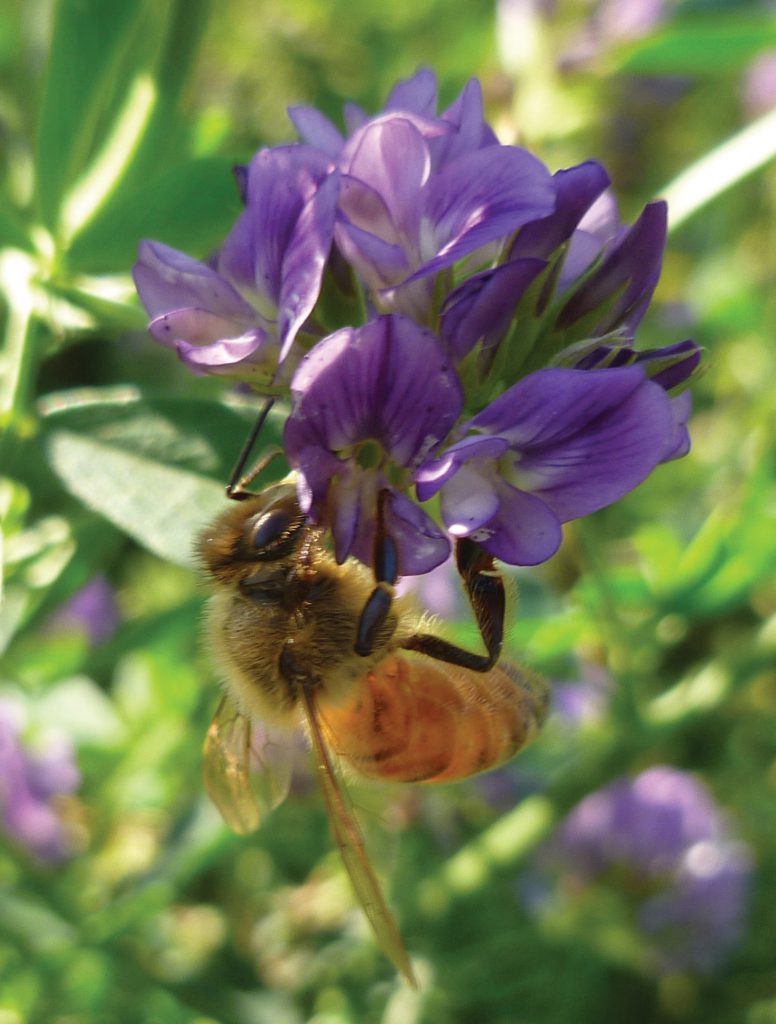 Professor Brunet and her team found that leaf-cutting bees, while foraging within a field, tend to move randomly between flowers, racemes and plants. They also discovered that honeybees and bumblebees typically tend to move in the same direction during foraging – which is known as ‘directionality’ of movement. Bees that exhibit directionality of movement obviously move greater net distances than those that randomly change directions – thus moving pollen and genes further.

Aside from directionality of movement, Dr Brunet and her team have identified or confirmed other foraging behaviours that affect gene flow. One such behaviour is the number of flowers visited by a bee in a field. Visiting more flowers within the same field actually tends to limit gene flow, as pollen grains from one flower tend to all be deposited on the flowers in that field.

The ‘tripping rate’ also influences gene flow. Tripping occurs when a pollinator depresses the keel of a flower in order to expose the stigmas for pollen to be released. Bee species vary in their tripping rate (the proportion of flowers visited that are tripped) and those with the highest tripping rate are predicted to have lower gene flow. This occurs because pollen is not deposited or collected from untripped flowers and the distance travelled by the individual pollen grains therefore increases.

Thus, gene flow depends very much on bees’ foraging behaviour, and Professor Brunet’s group is investigating. In collaboration with Dr Murray Clayton, also at the University of Wisconsin–Madison, they are modelling bee foraging to predict gene flow. The model has first been developed for continuous landscapes (one large field) and after the bee decision-making process has been elucidated, the team will expand their model to discontinuous landscapes (many fields).

Some types of alfalfa have been genetically engineered (GE) to confer practical traits, such as herbicide resistance, or low lignin to increase digestibility to cattle. GE alfalfa is common in the US, though there are concerns about gene flow between GE and non-GE varieties through pollination, leading to gene contamination of non-GE alfalfa crops destined for the conventional, organic and export markets. Therefore, the group has been measuring bee-mediated gene flow using GE alfalfa in order to test their model. They hope, on one hand, to apply the model of bee foraging to predict gene flow and, on the other, to use knowledge of bee foraging behaviour to develop management practices that limit GE gene flow.

Therefore, Professor Brunet’s work will improve the coexistence of GE and non-GE crops that rely on insect pollination. In addition to this, the team’s new insights into how different bees forage in agricultural fields and how this influences bee nutrition will help to promote bee survival and conservation. 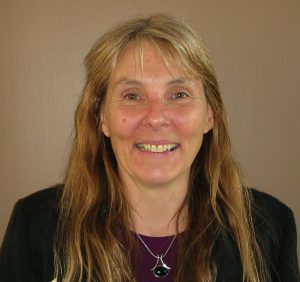 Professor Johanne Brunet gained an MS degree at McGill University in 1987 and a PhD at the State University of New York (SUNY) at Stony Brook in 1990. Upon graduating, she took up various research and teaching positions at the University of Chicago, University of Washington, Oregon State and Willamette University, focusing mainly on plant mating system evolution and plant-pathogen interactions. In 2003, she joined the USDA Agricultural Research Service and became Assistant Professor in the Department of Horticulture at the University of Wisconsin–Madison. Here, she rose to the ranks of Associate Professor and then full Professor in the Department of Entomology. Her research interests include the evolution, biology and ecology of pollination, plant-pollinator interactions, pollinator-mediated gene flow, and the implications for agricultural productivity and GM crop containment. Some of her group’s recent projects have focused on investigating pollinator movement and patterns of pollen deposition, the visual and olfactory cues of flowers that influence bee visitation, and identifying relationships between pollinator behaviour, plant traits, self-pollination and crop yields. Aside from her research, she has also been active in journal editorial duties, scientific outreach, consultancy and advisory panels.

M Thairu and J Brunet, The role of pollinators in maintaining variation in flower colour in the Rocky Mountain columbine, Aquilegia coerulea, Annals of Botany, 2015, 115, 971–979.

J Brunet and C Stewart, Effect of plant density and pollinator type on flower tripping and potential for gene flow in alfalfa, Psyche: A Journal of Entomology, 2010,