Good things come in small packages. Dr Larysa Baraban, Professor Gianaurelio Cuniberti and their colleagues at TU Dresden, Germany, are leading the charge in the application of nanotechnology in fields as diverse as biotechnology, environmental protection and point-of-care diagnostics.

Small can be powerful. This is the thinking behind the field of nanotechnology, which involves using things that we cannot observe with the naked eye. The field has grown by leaps and bounds in the last few decades due to technological advancements in both manufacturing processes and in the development of instruments to observe the nanoscale in more detail.

One of the most exciting aspects of nanotechnology includes nanosensors, which use nanotechnology to detect and quantify different chemicals and biochemicals with very high sensitivity. These devices are often very small and portable, meaning they can be used out in the field, where traditional lab equipment can’t go – such as detecting environmental pollutants, or measuring glucose levels in patients with diabetes.

Recently, Professor Cuniberti, Dr Baraban and their colleagues at TU Dresden have been investigating silica-based nanowires (tiny wires that are just a few nanometres in diameter) for several applications. In addition to studying their physical properties and explaining their behaviour and conductance, the team is also leveraging their understanding of these materials towards medical applications.

Nanowire-based field effect transistors are transistors in which most of the current is carried along a channel whose resistance can be controlled using electric fields. These transistors can function as nano-sized sensors. In fact, they are the most widely applicable electronic nanosensors, because of their extensive detection capabilities and their ability to be miniaturised at low cost without compromising on quality. 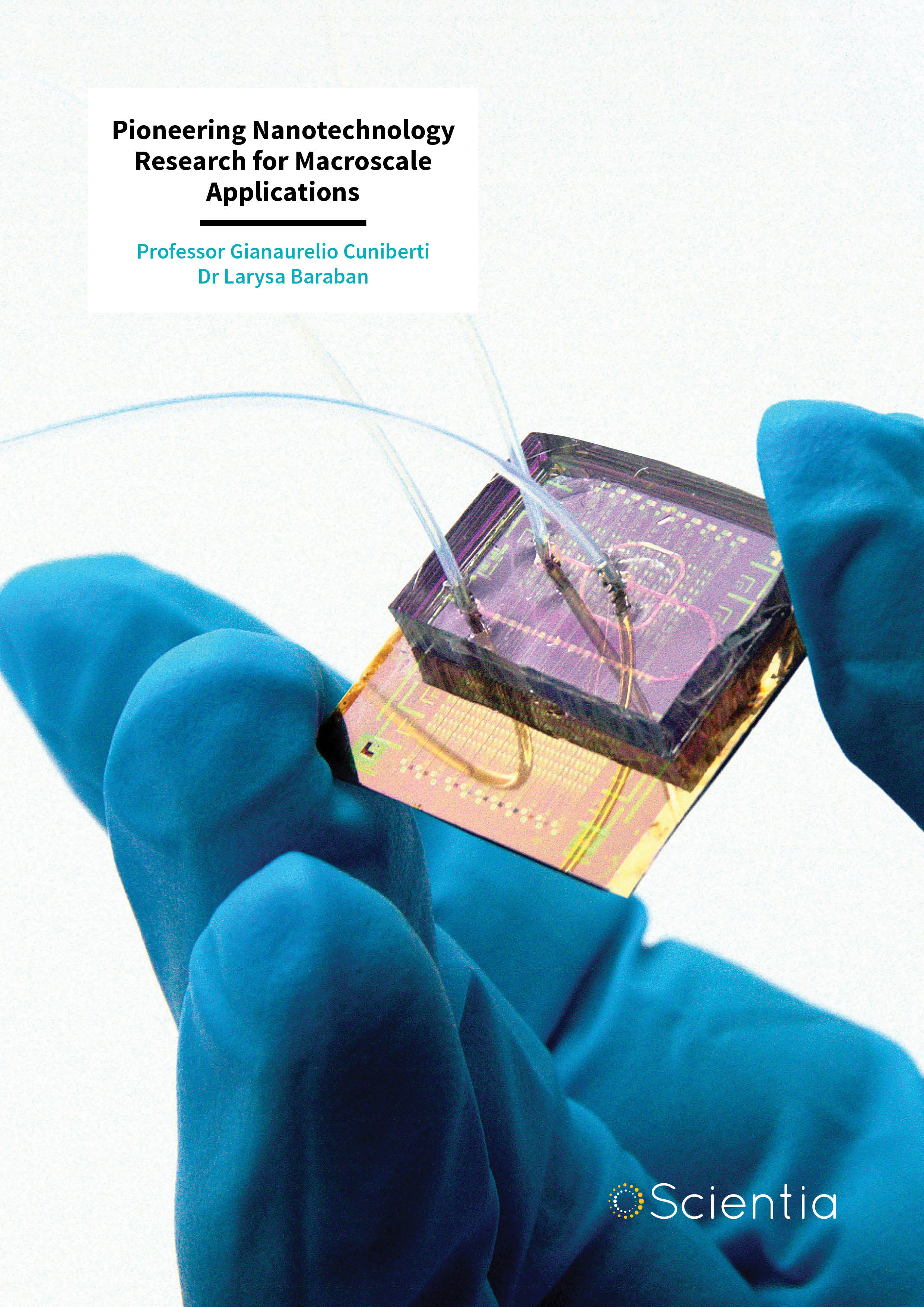 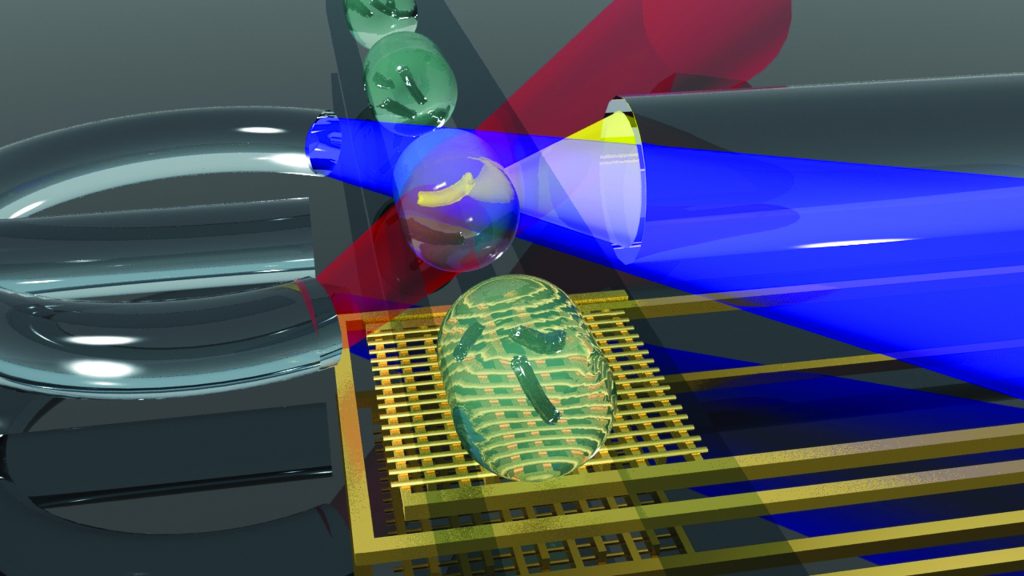 Both Dr Baraban and Professor Cuniberti believe that such nanosensors show great potential for clinical applications in the near future. These sensors are widely applicable, as they operate by measuring the electrical and chemical changes in solutions.

Together, the team has pioneered the understanding of the basic mechanisms behind how these nanosensors work, and have managed to apply this knowledge to real-world scenarios. They also constantly innovate and design their devices to be cheaper, faster and more reliable, making them ideal for deployment in developing countries for the rapid diagnosis of fast-spreading diseases.

The avian influenza virus (H1N1), which was declared as a pandemic in 2009, poses a severe health hazard to humans. To detect this deadly virus, the team assembled a lightweight, flexible electronic device containing an array of silica nanowire sensors. Their device has the potential to be easily fabricated in large-scale. When a sample containing the influenza virus is dropped onto the flexible device, the virus’s specific DNA sequence binds to the probe attached to the device, allowing the user to confirm that the virus is present. The molecular events that occur when the target sequence binds to the probe lead to changes in the surface charge that can be reliably measured as changes in electrical signals.

One of the many advantages of this system is its short detection time – the whole procedure takes only 30 minutes including handling and incubation time to detect the presence of the virus. This represents a significant improvement over current techniques, such as ‘viral culture’, which takes at least five days. In addition, the team’s detection platform minimises the risk of false positives that often occur in other fast and highly sensitive methods, such as ‘polymerase chain reaction’, which amplifies all DNA in the sample. 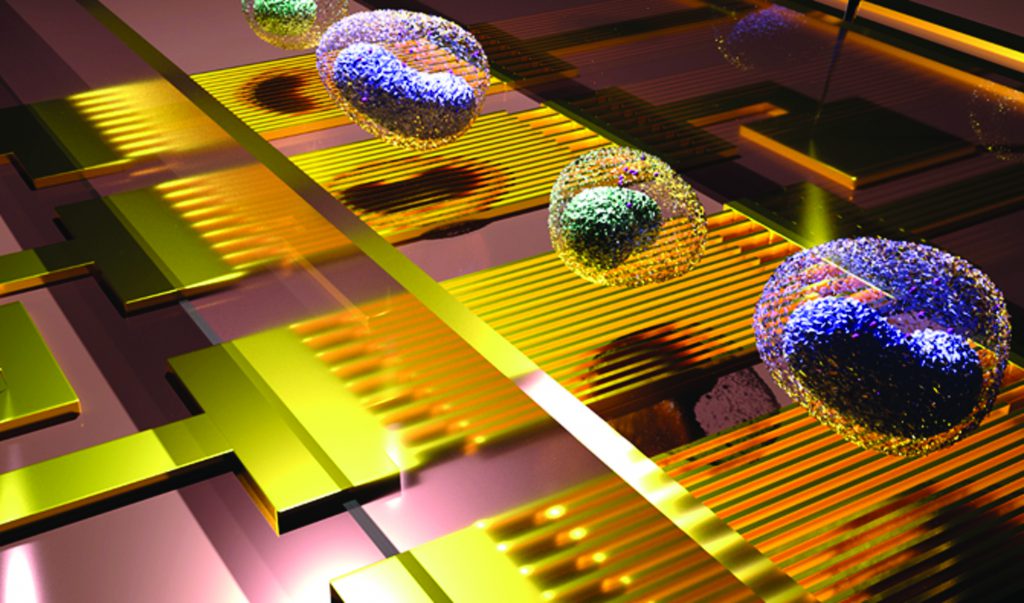 To measure the presence of the Ebola virus, the team adopted a different approach – using nanowire devices in a so-called memristor mode. A memristor is an electrical component that regulates the flow of electrical current in a circuit, and ‘remembers’ the amount of charge that has previously flowed through it. This characteristic has made them very popular for use as biosensors; however, they have only been used with dry samples, which is not always applicable in point-of-care diagnostics, where samples are usually wet.

Professor Cuniberti, Dr Baraban and their team figured out a way to create the first biological memristor that is compatible with liquids and is composed of a large array of silicon-nanowire-based electrical devices. The team chemically modified this device to specifically bind to a matrix protein named VP40, which is predominantly found on the Ebola virus.

When a sample containing the Ebola virus is dropped onto the device, this protein binds to a probe on the device’s surface, which leads to a change in the electric current that is measured. This change in electric current can be used to reveal the concentration of virus present. Interestingly, the team’s device outperformed both the traditional protein quantification assays (which are the current gold standard) and other biosensors that are currently available. This represents an important contribution to the field of biosensors and point-of-care diagnostics.

The team’s ultimate goal is to create nanodevices to measure the properties of microdroplets, with a view to measuring the chemical properties of a particular sample, or measuring the concentration of a certain chemical in a sample. Since microdroplets are so small, a major advantage of this technique is that very little sample is required, which is useful for analysing precious or scarce samples.

By monitoring real-time changes in pH, the researchers were able to detect the presence of glucose in the microdroplets. This application could conceivably be useful to detect glucose levels in blood samples from patients with diabetes, for example. 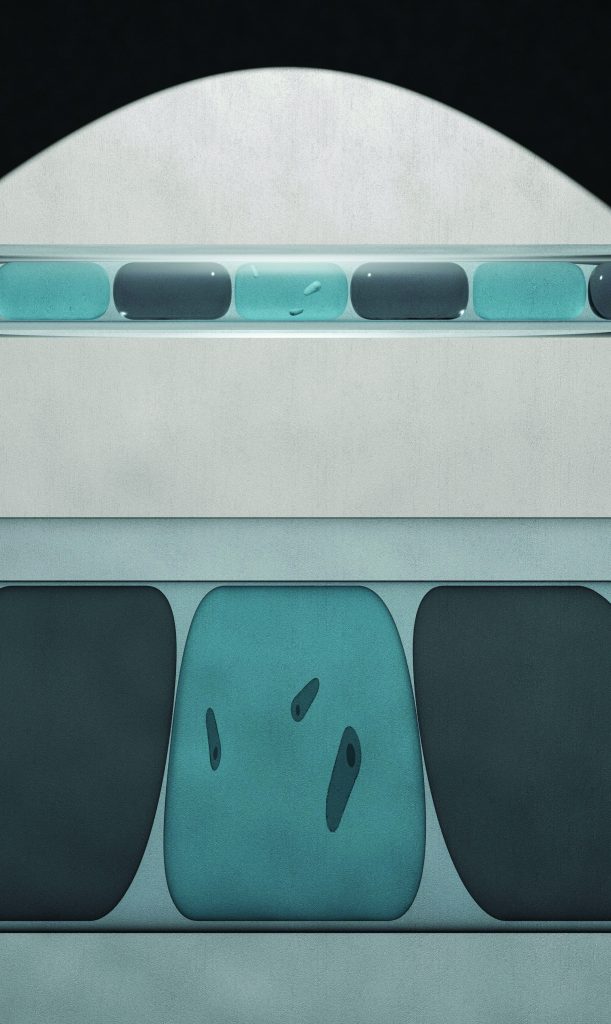 The glucose detection was performed using an enzyme called glucose oxidase, which accelerates the conversion of any glucose present in the solution to an intermediate chemical that is then converted into gluconic acid. The presence of gluconic acid leads to a change in the pH of the solution in time, which can be measured by the nanowires.

One of the major advantages of this system is that it does not rely on optical microscopy in order to perform the measurements; rather, it is based on the chemical properties of the solution alone. Such an ‘optic-less’ system would be very useful in miniaturised point-of-care diagnostics, as optical microscopy has several limitations, including a lack of a wide range of sensitivity and the fact that the sample is often destroyed during analysis.

The research team then ran their measurements using the optic-less system and compared it with traditional optic-based sensors. Interestingly, the performance of both systems was similar. These results are highly encouraging for the team, who plan to assess their droplet microfluidic sensor for other applications, such as the early detection of pathogenic bacteria, and in drug screening.

In another application for their microdroplet technology, the team also recently tested the suitability of their system for the detection of environmental pollution. One area where pollution can be particularly disastrous is in aquatic ecosystems.

Aquatic microorganisms play an important role in global ecosystems, as they participate in the food chain at multiple levels. Paramecia, single-celled microorganisms that feed on bacteria, algae and yeasts, are particularly susceptible to environmental pollutants such as silver nitrate. This chemical, which is commonly found in disinfectants, interferes with their metabolism and induces toxicity, hindering their ability to clean their surrounding environment. 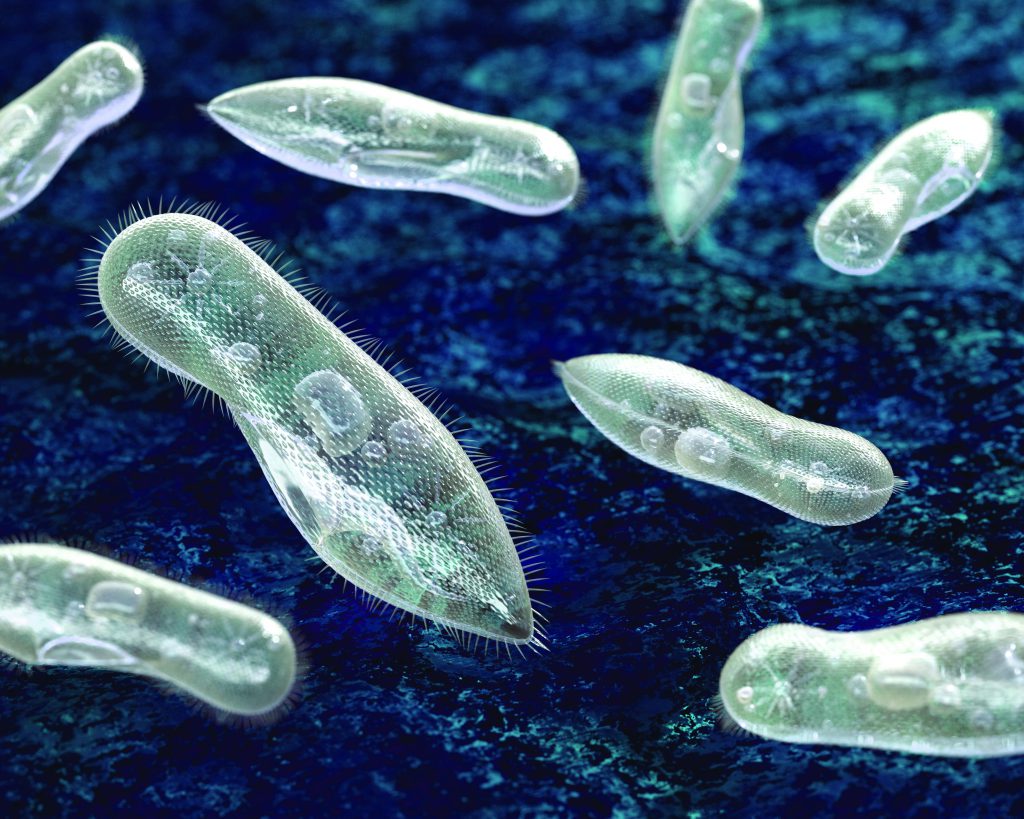 To evaluate the levels of pollution in an ecosystem, Dr Baraban, Professor Cuniberti and their colleagues developed a millifluidic device (slightly larger than a microfluidic device) to isolate and monitor the health of single paramecium cells from large volumes of samples. Each droplet contains a single paramecium, which is monitored using a spectrometer (an optical measurement device) that detects changes in the cell’s fluorescence. This fluorescence signal gives a direct measure of the health of the paramecium – the signal changes if the cell has died due to contact with a pollutant such as silver nitrate. This technique has several advantages over currently available microfluidics techniques, which can only process small volumes at once.

Upon further refinement of the team’s technology, this system could be used to assess the real-time environmental damage of several pollutants including silver nitrate, copper oxide and zinc oxide. 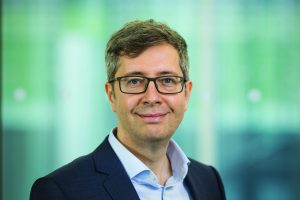 Professor Gianaurelio Cuniberti obtained his PhD in 1997 in Physics in a joint collaboration between the University of Genoa, Italy and the University of Hamburg, Germany. He headed the Volkswagen Foundation Research Group at the University of Regensburg, Germany from 2003 until 2007. Currently, Professor Cuniberti serves as the Chair of Materials Science and Nanotechnology at the Technical University Dresden (TU Dresden) and the Max Bergmann Center of Biomaterials in Dresden, Germany. His research focuses on nanostructured materials for molecular sensor technology, as well as quantum transport phenomena. He has also made important contributions to the theory and modelling of the electronic and structural properties of bottom-up nanoscale materials. 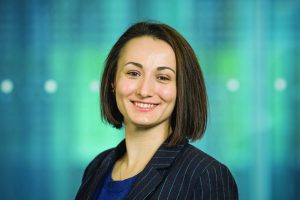 Dr Larysa Baraban completed her PhD in the University of Konstanz, Germany in 2008 in the Department of Physics. After a stint as a postdoctoral researcher in the University of Pierre and Marie Curie, France, she moved to TU Dresden, Germany, where she worked as a postdoctoral research fellow from 2011 until 2013. She is currently a group leader of Bionanosensorics in the same university. Dr Baraban’s research revolves around the use of nanomaterial-based biosensors and systems, flexible sensors for point-of-care diagnostics, microfluidics for high throughput biochemical analysis, artificial nano- and micromachines and magnetic soft matter.

The German Ministry of Research (BMBF)