The human body is a bewildering set of interacting systems, a complex web of signals and pathways which are constantly adjusting to the conditions which we find ourselves in. Ground-breaking research by Dr Lei Cao, of Ohio State University, USA, is providing new insights into the impact of our environments on our health. Read on to learning about how an interesting environment leads to fat loss and even protects against cancer.

The Outside World and Our Inner Physiology

Whether it be the outside temperature, our blood sugar levels, or even the time of day, our bodies measure, assess, and interpret these factors in order to provide the optimum response. Yet this complexity goes even further. Recent research has shown that even seemingly unconnected factors such as living conditions and social contact can lead to measurable changes in the activity of our brains and the biochemistry of our bodies – with remarkable impacts on our health.

One researcher working in this field is Dr Lei Cao of Ohio State University, USA. As Dr Cao notes, her work has covered a broad range of topics and discoveries that is showing how ‘lifestyle can efficiently influence brain activity, and how these changes in the brain interact with other systems both at the molecular level and at the systemic level, influencing metabolism and various diseases including obesity, diabetes, and cancer.’ Alongside her network of collaborators, Dr Cao has identified a number of interlocking systems which connect the outside world to our inner physiology.

Many of these systems involve a protein known as BDNF, a conveniently short acronym for the significantly-lengthier term ‘brain-derived neurotrophic factor.’ BDNF is a protein which is manufactured widely in the brain including the hypothalamus, a small part of the brain which is responsible for secreting a number of hormones and thus (via various intermediary steps) controlling things such as temperature, hunger, and sleep. BDNF itself is involved in several of these pathways, though it is most commonly associated with the control of metabolism.

A number of scientific studies have linked BDNF to the control of our metabolism and energy balance. A lack of BDNF leads the body to begin storing energy as sugars and fats, leading to obesity and hyperglycaemia. By contrast, an increase in BDNF levels leads to a reduction in hunger, increased energy use, and thus, weight loss. Interestingly, this occurs even when the protein is injected, making it an interesting target for clinical researchers.

‘Given the increased cancer risk associated with obesity and insulin resistance, this patented technology might have therapeutic potential beyond genetic forms of obesity.’

Dr Cao and her research group wanted to test the effectiveness of BDNF in combating obesity. To do this, they used mouse models of the disease, that is, ones that had been genetically modified to lack a receptor protein, and which as a result gained vast amounts of weight. The gene encoding BDNF was then transferred into the mice, where it then caused the protein to be produced. This was, however, slightly more complicated than it first seemed. Continuously producing the BDNF protein would lead to weight loss but would lead to continuous weight loss – eventually overshooting the healthy ideal and leading to muscle wasting and weakness. 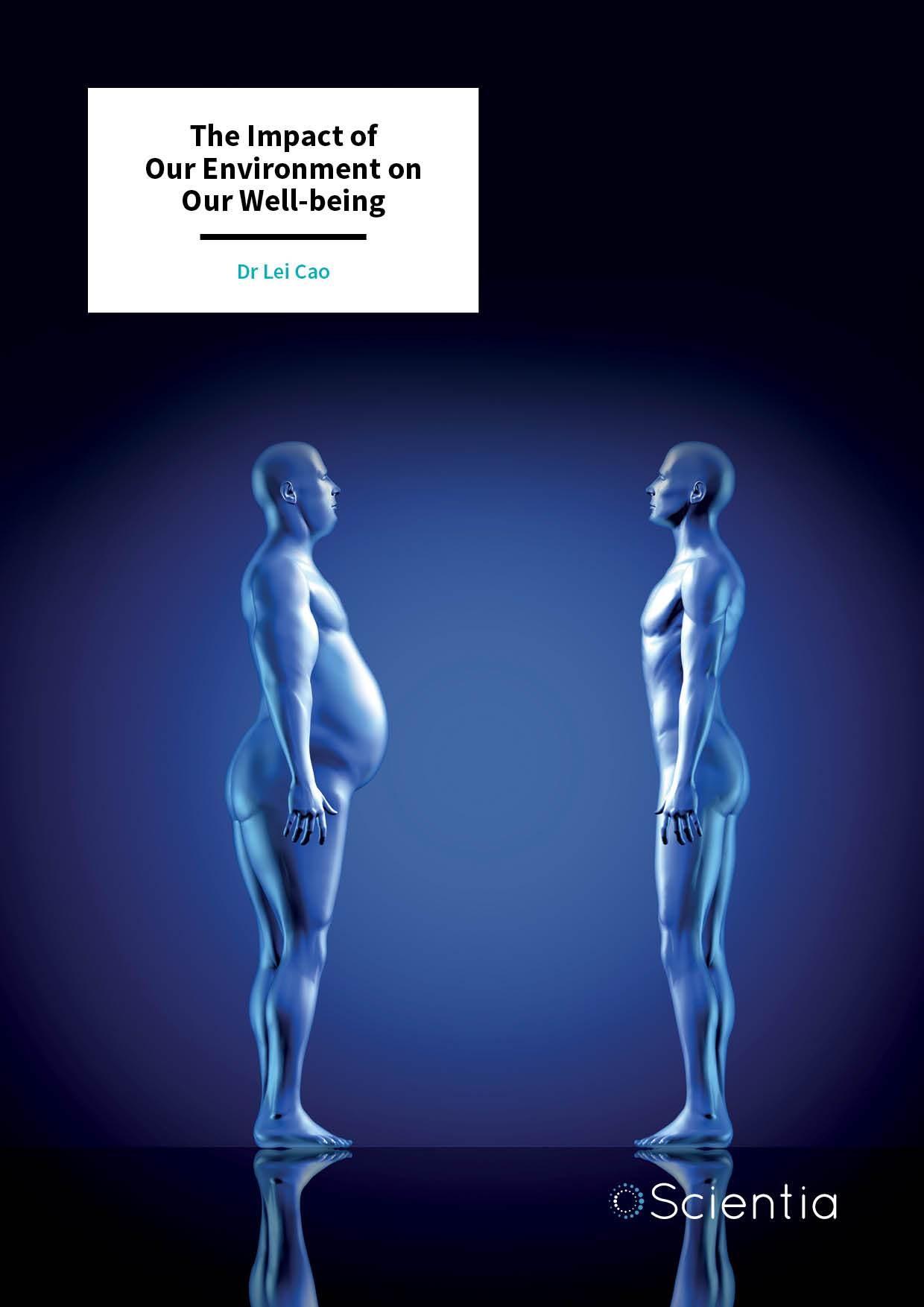 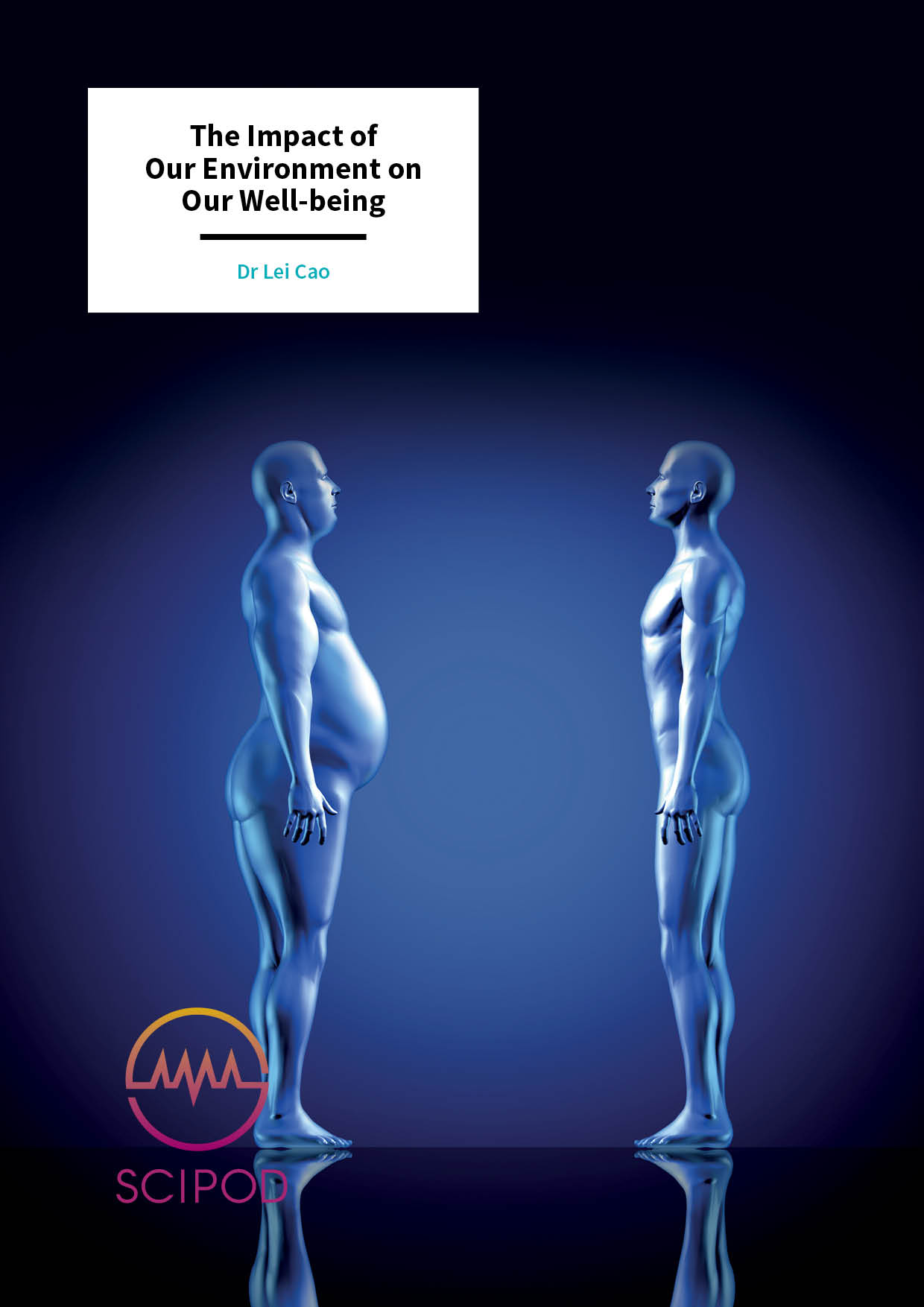 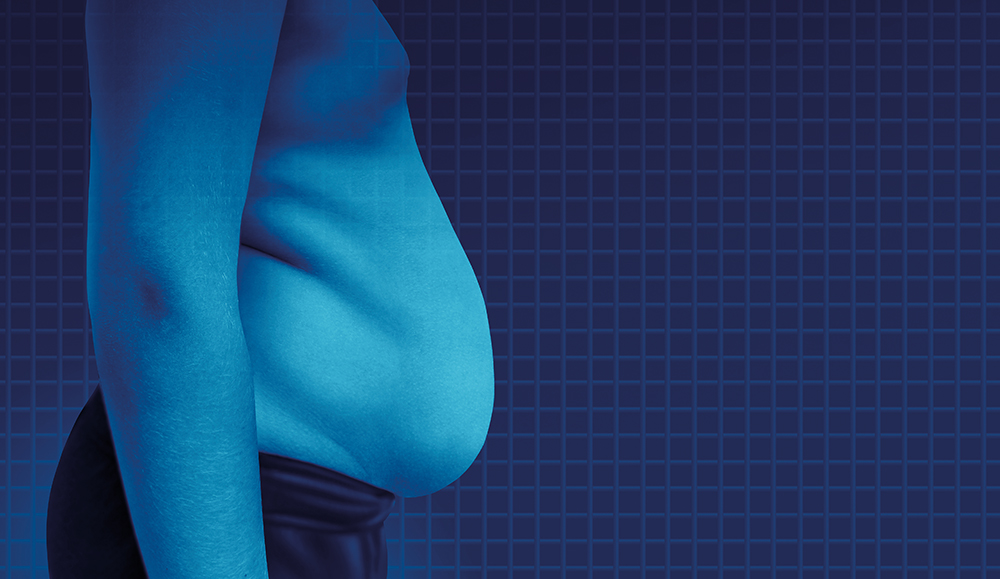 To avoid this problem, the researchers created a dual-effect genetic vector. In Dr Cao’s words, ‘We have developed a built-in auto-regulatory system to control therapeutic gene expression mimicking the body’s natural feedback systems.’ How was this achieved? One part of the vector brought the BDNF gene into the body, raising levels of the protein, and thus driving weight loss. The other part produced a microRNA, a small fragment of nucleic acid matching part of the BDNF gene. These fragments trigger the viral-protection mechanisms within the cells of higher animals. These mechanisms track down and destroy all RNA sharing the same sequence as that fragment. Although complex, this gene silencing process is a reliable way to allow researchers such as Dr Cao to turn a gene ‘off,’ preventing the production of proteins such as BDNF.

It may appear somewhat foolish to continuously express a gene only to destroy it directly afterwards. However, the activity of the microRNA portion can be tuned separately, for example, by placing it under the control of a system which is activated when losing weight. As the researchers showed, this causes BDNF to be produced in high levels by obese mice, but in steadily-decreasing levels as they lost weight. This led to a quick initial drop in body-weight but then a gentle glide down to a sustainable and healthy plateau. In other words, the self-regulatory vector was able to create a change in obese mice which mimicked the normal, healthy weight-loss process.

Importantly, this is not the only use for such a vector. As Dr Cao comments, ‘given the increased cancer risk associated with obesity and insulin resistance, this patented technology might have therapeutic potential beyond genetic forms of obesity.’ 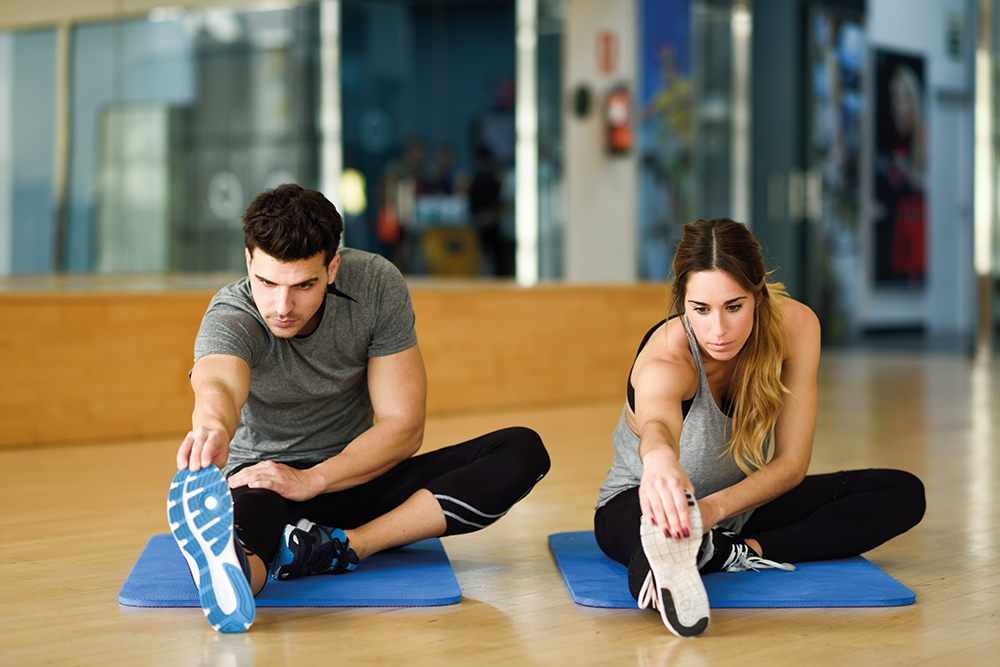 ‘We have expanded this work to several solid tumour models including colon cancer, breast cancer, pancreatic cancer, lung cancer, melanoma, and glioma. In addition, we have observed a robust anti-leukaemia effect of environmental enrichment.’

Another area in which BDNF plays a role is that of environmentally-triggered changes to obesity. It has long been known that an environment full of interesting things to see and interact with (referred to simply as an enriched environment) leads to an increase in mental ability and a corresponding improvement in overall health. This requirement for enrichment is commonly found from mice to humans, and research by Dr Cao and her collaborators had previously shown that mice living in an enriched environment tended to be leaner than those in standard cages, despite being fed identically.

The relationship between weight loss and metabolism is complex and highly-interconnected, with much centring on the actions of two types of fat-containing tissues. Known as white adipose and brown adipose tissue, they have significant differences in their physiological roles. Brown adipose tissue is capable of ‘uncoupling’ the usual cycle involved in producing cellular energy from stored fats. This leads to the production of heat, and acts as an important mechanism in maintaining temperatures in cold conditions – particularly for babies and young children. Uncoupled energy use is particularly interesting for scientists as it burns a lot of energy very quickly – making it a potential target for weight-loss drugs.

The researchers were able to show that mice in enriched environments had higher levels of brown adipose tissue. As well as having pockets of cells within the white tissue which were ‘browning,’ they were starting to exhibit typical features associated with brown fat. This was occurring in response to a complex set of molecular signals, themselves triggered by metabolic-mediating signals from the hypothalamus. One of these signals was BDNF, and the research group was able to show that increased expression of the protein was able to reproduce the effects seen in enriched mice – a general shift towards brown adipose tissue and a subsequent loss of weight. Inhibiting this BDNF signalling reversed the effect, showing just how vital the protein was for the process.

In other words, Dr Cao’s research group had successfully demonstrated the existence of a new connection in the metabolic web. Interesting, enriched environments triggered the production of BDNF within the hypothalamus, which in turn led to ‘browning’ of the fat-containing tissue and subsequent weight loss. 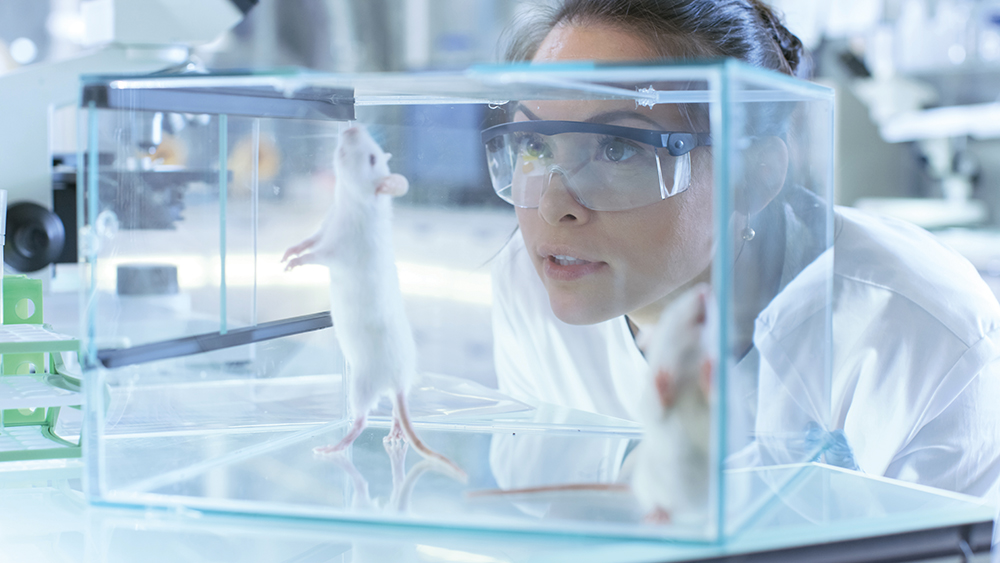 Cancer is a disease in which the microscopic environment of the tumour cell has incredibly varying effects on the overall progression of the disease. Although many researchers have focused on the cellular factors which drive cancer progression, few have examined the role of the overall environment – the social and living space in which the patient lives.

Further experiments using cultured cells grown in bottles showed that blood serum from enriched mice was also able to inhibit cancer cell growth outside the body. At the same time, the serum showed a significantly decreased level of the signalling molecule leptin. This hormone has a number of different roles but one of the major ones is to control metabolism, acting via signalling in the hypothalamus.

You may recall that BDNF is produced in the hypothalamus, and indeed, the researchers were able to show again that BDNF was more abundant in those mice living under enriched conditions. Further genetic experiments were able to show that increasing expression of BDNF protected against tumour growth, with high-BDNF mice having slower tumour growth even when living in standard conditions. Even more convincingly, removing BDNF removed the tumour-reducing effect seen when living under enriched conditions.

Based on this information, the researchers were able to conclude that BDNF plays a crucial role in allowing the outside environment to improve disease outcomes and reduce the progression of cancer. 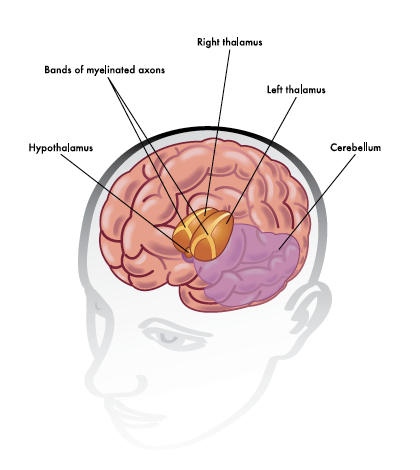 Ilustration of the Hypothalamus in the Human Brain

Research by groups such as Dr Cao’s has only begun to scratch the surface of the interactions between the environment and our internal biochemistry. The researchers intend to expand on these initial discoveries, notably within the field of tumour prevention. Dr Cao notes, ‘We have expanded this work to several solid tumour models including colon cancer, breast cancer, pancreatic cancer, lung cancer, melanoma, and glioma. In addition, we have observed a robust anti-leukaemia effect of environmental enrichment.’

The outcome of this work remains to be seen. However, if previous efforts are anything to go by, we will soon see a number of novel discoveries flowing from the enriched laboratories of Dr Cao and collaborators. 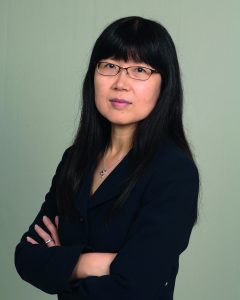 Dr Cao is currently employed at the Comprehensive Cancer Center, Ohio State University. Her research career began at the Chinese Academy of Sciences, followed by research fellowships at the University of Freiburg and Thomas Jefferson University. After this period of travelling and adventure, she settled in her current location at Ohio State University in 2006. Her research focus is the effect of environmental stimuli on the central nervous system and the subsequent effect on biological processes and disease pathology. A highly successful career has led to publications appearing in a range of prestigious journals, including Cell, Nature Medicine, Nature Genetics, and Cell Metabolism.