Dr Leonard Bryan Coop – Cloudy, With A Chance Of Insects

The Integrated Plant Protection Center at Oregon State University is both a hub for research into agricultural pest management and the host of widelyused pest forecasting tools. Dr Leonard Coop and his co-workers plan to improve those tools even further.

Should I plant my crops tomorrow or next week? Answering this apparently simple question is a matter of both vital importance and exceptional difficulty – it underlies the success of our crops (and thus our ability to eat) and yet is almost impossible to answer with any certainty. Indeed, trying to answer this with confidence is a problem which has frustrated humans for millennia.

Early answers were based on simple observations of the natural environment and their correlation with the weather. This was often passed on in the form of sayings – think of ‘red sky at morning, sailors take warning’, ‘clear moon, frost soon’, or based on the actions of local animals – low-flying swallows predict rain, cows stand up when it gets warm. These types of predictions tend to be useful in a short term and unreliable way – they help you to plan your farming tomorrow but rarely help you for the next week.

Weather forecasts became more systematised in the 1800s, when the telegraph allowed knowledge of the weather to travel faster than the weather itself. Widespread collection of weather data ensued and allowed rough charts of
local conditions to be constructed. This lead quickly to the first published weather prediction in 1861, suggesting fine weather with a fresh westerly wind the next day (the actual weather was cloudy with a southerly wind, beautifully illustrating the difficult relationship that weather forecasters have with their subject matter).

Various advances then led to the notion of numerical forecasting, in which a mathematical model of the atmosphere could be created and used to predict future conditions from the current status. Essentially dividing the atmosphere into a 3D-grid and then modelling the interaction of each section with its neighbours, this method was (to put it lightly) fiendishly complicated. Because of this complexity, useful numerical forecasting only took hold in the 1950s, when computers allowed forecasts to be calculated before the weather had come to pass. Steadily advancing computing power and mathematical models have allowed for steadily more accurate models, to the point where 8 day forecasts are usually quite reliable. Getting past this point, however, is where the difficulty starts. 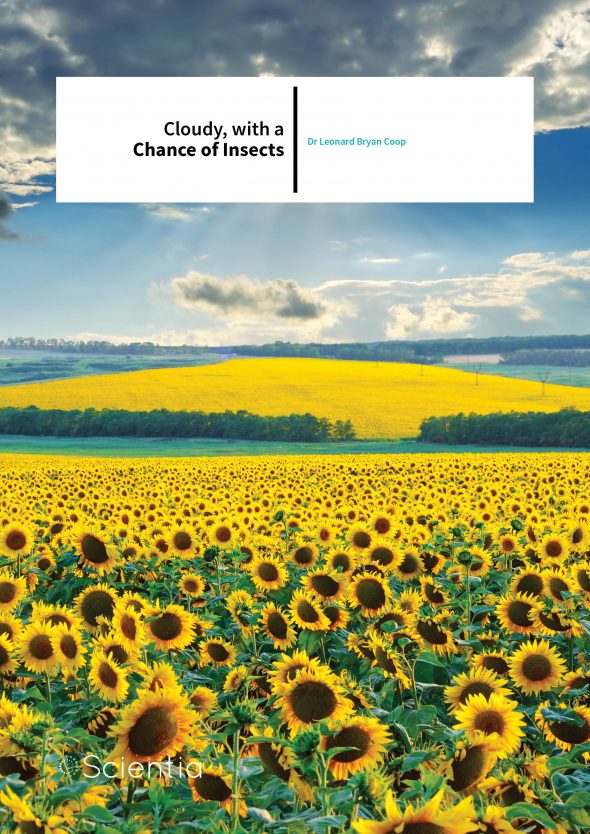 Whether the Weather be Windy

This difficulty arises from the chaotic nature of the weather and atmospheric conditions. Chaotic systems are best described as those in which small differences in initial starting conditions lead to widely differing conditions at later stages. Similar problems apply to weather forecasting – small errors or uncertainties in the initial forecast will rapidly multiply to provide something which is utterly different to the actual conditions. Because of this, longer-range forecasts tend to rely on things such as 30-year normal data – if you know what the temperature has been on June 22nd for the last 30 years, you can be fairly certain that this year’s temperature will be around the average of those previous values. This type of prediction is simple to make, often correct, and will completely miss every atypical change in conditions. It is, in the jargon of meteorologists, lacking in ‘skill’.

Skill is not, it should be noted, the skill of the meteorologist – it instead refers to how well a forecast actually predicts the future. Simply taking a number of previous measurements as your prediction is defined as the skillless forecast, this is considered to be the baseline prediction. Forecasts which predict the weather with better accuracy than this baseline have a higher degree of skill, those with less accuracy can be thought of as having negative skill. The goal of forecast experts is to increase the skill of their models over time.

To improve the overall predictive skill, weather forecasters use a number of evermore complex mathematical models each utilising increasingly powerful computers. One of the current leaders for longer-term forecasts is known as the North American Multi-Model Ensemble (NMME) – a system that combines models from seven different organisations (including NASA and NOAA) to produce a relatively reliable but lowresolution forecast of conditions out beyond
3 months from today. It does this in part through extensive incorporation of oceanic conditions (including long-term effects such as the El Nino/La Nina oscillation).

You may be reading this article and wondering why you should care – tomorrow’s temperature is important, but in two weeks? Or three months? For most of us this is not hugely important information. But it is very important indeed for agriculture, because the environment heavily affects both the growth of crops and the growth of the pests that would like to feed on them. Thus, a vast amount of forecasting research is linked to improvements in the current state of Integrated Pest Management.

Integrated pest management, or IPM, can be thought of as the scientific approach to controlling harmful pests. It centres on the idea that you cannot wipe out an entire pest population (at least, not in an economically efficient way) and thus it is better to take action to keep your inevitable pest population below a certain threshold value. This involves a lot of population monitoring and the use of mathematical models to determine when and how much intervention (such as spraying of insecticides) should be performed. Weather forecasting provides a vital part of this approach, in that many serious pest infestations are related to environmental conditions. Let’s take two of these in particular – potato late blight and spotted wing Drosophila. 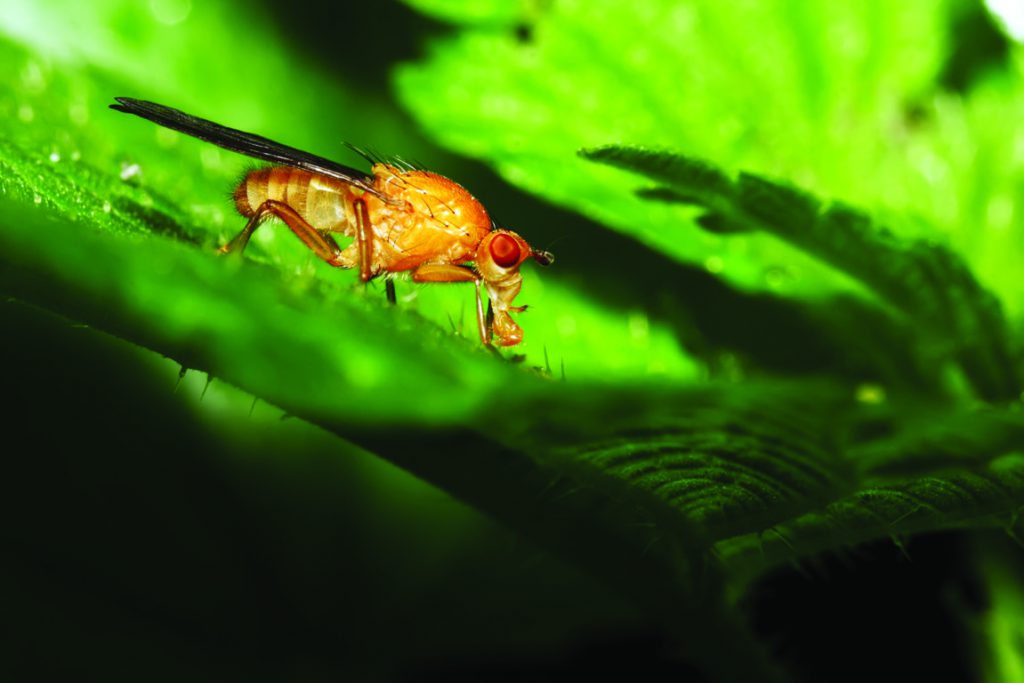 Late potato blight is caused by infection from the rather complicatedly named oomycete P. infestans. Infected potatoes will rapidly decay, even in storage, and fields can remain infected for years if some infected tubers are accidentally left in the ground. Blight was one of the major causes of the Irish Great Famine (a natural disaster which led to the death by starvation of about one million people), and to this day the disease causes crop losses worth around $6 billion each year.

The late blight infestation is strongly correlated with environmental conditions, with humidity and temperature playing a vital role in P. infestans reproduction and spread. Farmers look for periods of 1–2 days in which the temperature is over 10°C and humidity is over 90% – conditions which are particularly conducive to blight spread – and perform fungicide spraying at these times. Weather forecasting models are able to predict these conditions and so indicate ideal times for treatment – this lies behind a number of current warning systems for farmers such as BLITECAST.

Spotted wing Drosophila, by contrast, are small, fast-breeding insects. They are problematic pests for fruit farmers, laying eggs inside ripening fruit and so causing serious damage to soft fruits such as apricots or berries. Since their first detection in 2008, the flies have been steadily spreading throughout the continental United States. Only a few millimetres long and unable to fly long distances, their rapid spread is mostly assisted by human transport of infected crops. Spotted wing Drosophila tend to emerge from hibernation once temperatures hit 10°C and will quickly search out susceptible fruit to lay their eggs. As such the ability to predict temperatures at the local orchard level is very important in allowing farmers to plan their insecticide applications.

This brings us to the work of researcher Dr Leonard Coop of Oregon State University and his collaborators at Washington State University and Fox Weather LLC. Oregon State University currently hosts USPEST.org, an online portal that allows the general public to connect weather data and forecasts from tens of thousands of weather stations with over 120 models that predict the occurrence of pest arrivals, emergences, peak flights, and disease infection risks for multiple cropping systems. By combining this data, it is possible for farmers to easily view, say, the most likely emergence dates for spotted wing Drosophila, and they can then use this information to plan their insecticide treatment. In particular, recent improvements to the site (including incorporation of Google Maps information) now makes it relatively easy for the public to choose an area of interest, run several types of computer models, and then plot predicted risks on a map of the local area or in interactive graphs over time. This online portal is heavily used, yet suffers from the same difficulties as all weather forecasting – predicting temperatures beyond about 10 days out rapidly becomes very unreliable and so everyone needs to fall back on 30-year-normal data. 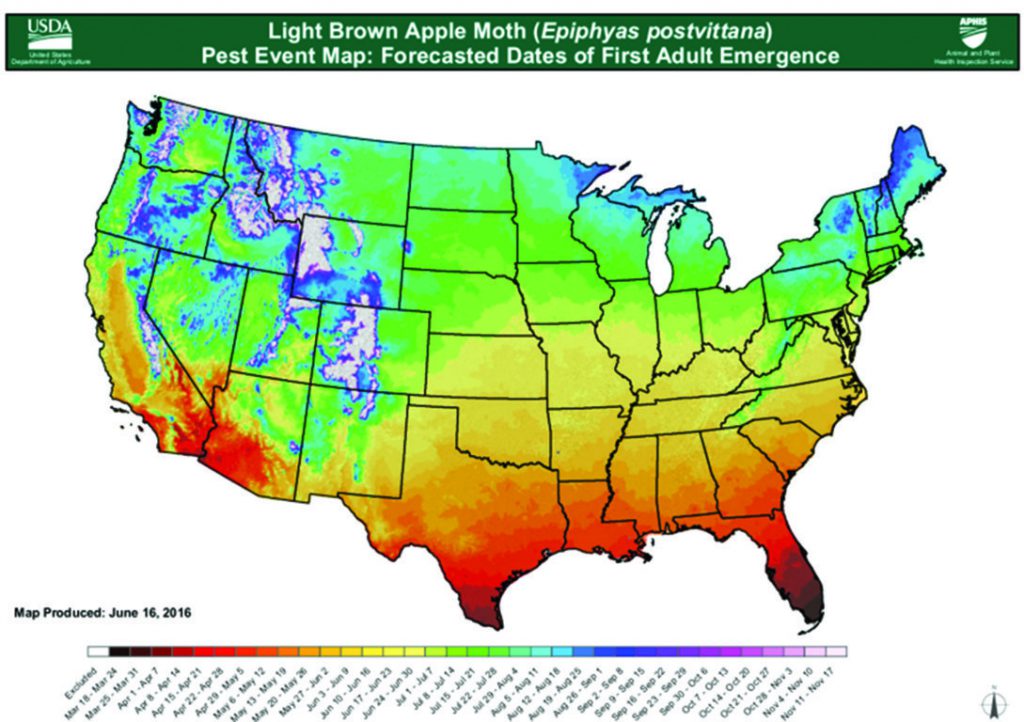 To move beyond this difficulty, Dr Coop and his collaborators are adding data developed by other meteorological departments, in particular the long-range NOAA NMME models. NMME models are able to give state-of-the-science estimates for dates relatively far into the future, but these models (and the departments that host them) have a stronger focus on both large-scale weather systems and wideranging oceanic conditions. As such, the data they produce has yet to be applied to more specialised and ‘small-scale’ work such as the forecasting of insect or blight outbreaks.

To fill this gap, the group has blended high-resolution historical data (the 30-year-normal data collected over the decades), lower-resolution but longer-term forecasts (such as those provided by NOAA or in NMME models), and the high-resolution but short-term data available at weather stations around the continental United States. This smoothing process allows each model to fill the gaps left by the other – longrange forecasting can be blended with high-resolution data to provide a service greater than the sum of its parts. By doing this, the group intends to create best-available forecasts down to the level of a single field – thus allowing farmers to decide that they should be spraying these fields today, but those fields can be left until tomorrow. 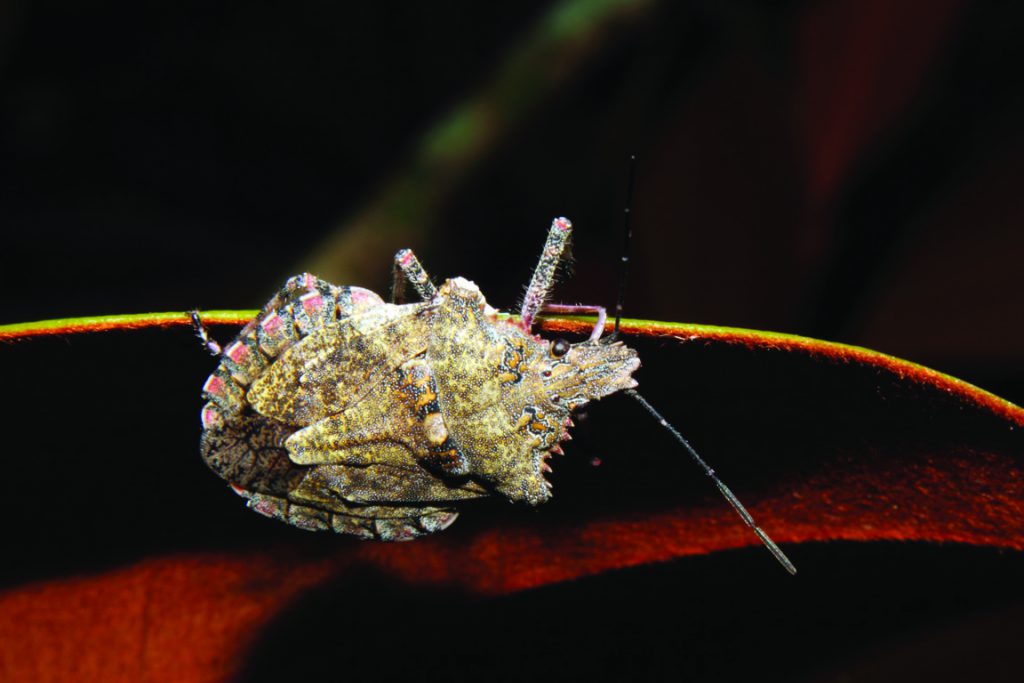 In keeping with their importance and sensitivity to environmental conditions, Dr Coop and his team will initially focus on late potato blight and spotted wing Drosophila. The predictions associated with this newly blended data will be provided to farmers across the United States, with the group holding training sessions for farmers around the Pacific Northwest area. Initial integration of the NMME models to the online portal are already popular. ‘Anecdotally, they seem to make more accurate predictions than historical average temperatures, especially in the unusually warm weather we’ve had in recent growing seasons,’ comments Nick Andrews, a researcher at Oregon State University who has been implementing the use of NMME models with fruit and vegetable growers. ‘Dr Coop made access to the NMME format seamless on the IPPC websites – in usability studies people have found it easy to use and understand the new NMME forecasts.’

The work being performed by Dr Coop and his fellow researchers is essential in bringing meteorological knowledge and forecasting to those who need it most – local farmers and growers. By providing detailed information on just when and where spraying should be performed, it allows for tighter control of pests with less use of insecticides and fungicides – which in turn helps both farmers and the environment. And this, in the end, helps us as we stand in the supermarket, looking at the vegetables, wondering what to eat, and checking to see whether the weather will be sunny for tomorrows’ picnic. 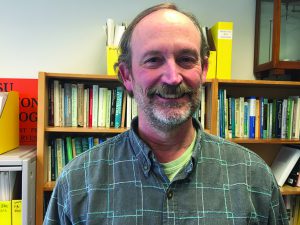 Dr Leonard Coop began his research career in the Entomology Department of Oregon State University, where he began to focus on pest management in commercially relevant crops. He soon moved into the field of decision support systems for Integrated Pest Management field, leading to his current dual-role as an Associate Director of the Integrated Plant Protection Center and Assistant Professor in the Department of Horticulture. With 28 peer-reviewed papers published, almost $5 million in awarded grants to date, and national leadership as director of the USPEST.ORG website, Dr Coop is a highly successful specialist within the vital field of pest management.