The malignancy of brain tumours such as glioblastomas are controlled by complex networks of interlocking genetic factors. Dr Maria Stella Carro’s ultimate aim is to unravel these complex puzzles and find new opportunities for novel glioblastoma therapeutics. 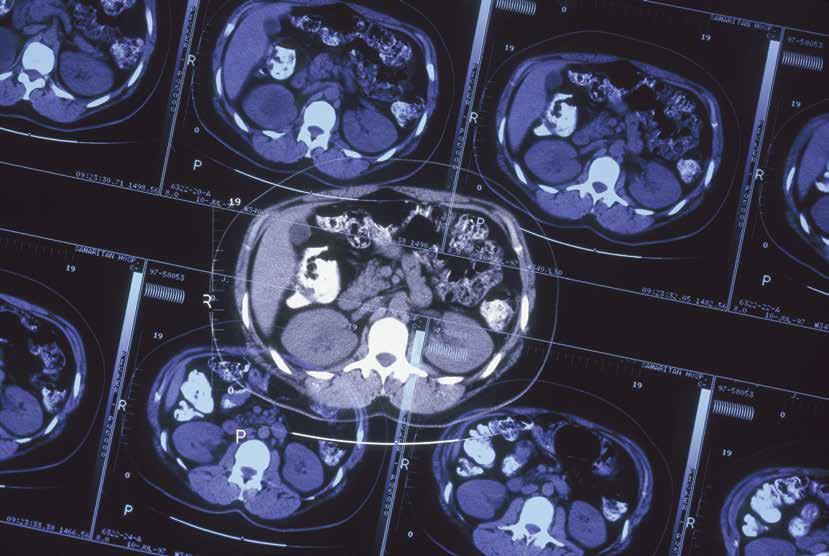 There are few things in this world worse than watching a loved one die of cancer. The sudden shock of diagnosis, the wearing months or years of treatment and hospital visits, the moment of realisation when all other options are gone. Brain cancers such as glioblastoma are more terrible still, when patients and their families need to decide between almost certain death and the horrific potential side-effects which come when surgeons slice both tumour and healthy brain tissue away in a last-ditch attempt to save lives. Is it any wonder that we want to understand these diseases, to find out what makes them tick and, in the end, how they can be destroyed?

Our story starts in the world of DNA, the blueprint of life and the code for every single one of the proteins which keep our millions of cells alive. Vast amounts of energy are expended by each cell to ensure that DNA is copied exactly, repaired when broken, and kept in a pristine state. Yet despite all of this effort, mistakes slip through. Mutations occur, sections can be deleted and swapped. Normally this is not an issue, as a group of tumour suppressor proteins are able to detect when the damage is too severe and instruct the cell to kill itself, removing the threat to the body as a whole. Yet mutations can occur in these genes themselves, deactivating them or preventing their proper function – this acts as one of the several stages by which a standard, healthy cell can turn into a malignant tumour.

Yet though we say ‘cancer’ and ‘tumour’, there are vast differences within these words. The genes which are currently active in any set of cells can be the difference between an easily treatable worry and a highly aggressive disease with no hope of survival. The process by which genes are read and translated into proteins is controlled by transcription factors, protein switches which turn genes on and off according to their individual input signals. Transcriptional networks are made up of many different transcription factors, each of which can affect the overall expression of many targets, including other transcription factors within the network. Networks can be incredibly complex, with different factors altering expression patterns both up- and down-stream, perhaps better thought of less as a series of traffic lights and more like a downtown traffic grid. Identifying which parts of this transcriptional network are active in any one tumour cell can help doctors to target their therapies more precisely, vastly helping patient survival.

This complex field has attracted many bright scientists, and one of the wellknown researchers active in the area is Dr Maria Stella Carro, Head of the Genetics of Brain Tumours group at the University of Freiburg, Germany. Dr Carro tells us why she decided to pursue a career in this field: ‘What attracted me the most was the possibility explore the connection between this pathology and the nervous system,’ she explains. ‘Of course, I was also motivated by the urgent need to make progress in the understanding and treatment of this terrible disease.’ Her work focuses on the transcriptional networks which lie behind the malignancy of glioblastoma, with the goal of understanding both how these networks interact with each other and, eventually, how to treat them.

As we said before, ‘tumour’ covers a wide range of possibilities, and similarly glioblastomas are not just ‘glioblastomas’. Following on from the realisation that transcriptional networks can affect tumour growth and malignancy, many people have tried to identify subclasses of glioblastoma based on their transcriptional fingerprints. One of these subclasses, known as mesenchymal glioblastoma, is often observed as having the most malignant features – this is associated with high numbers of mutations in tumour suppressor genes such as NF1, PTEN and TP53.

‘Given the association of the mesenchymal subgroup with the most aggressive features of these tumours,’ comments Dr Carro, ‘I became interested in identifying and studying molecular mechanisms driving this gene expression signature.’ This interest led to her postdoctoral work at Columbia University in the Institute of Cancer Genetics, where she identified and explored a transcriptional network which affected glioblastoma growth and survival. As you can imagine, this was difficult research into highly complex, tangled network.

Difficult, yes, but successfully navigating this complexity led to one of Dr Carro’s first high-profile publications. ‘I identified a group of transcription factors potentially involved in the regulation of a gene signature (mesenchymal signature) associated with glioblastoma,’ she recalls, ‘it revealed the crucial role of the transcription factors Stat3 and C/EBPβ and represented the first comprehensive mapping of transcription factors controlling the mesenchymal signature.’ By creating a scientific map, of sorts, the researchers laid the groundwork for further drug discovery and proved to the world that it was possible to find ‘master regulators’ for other types of cancer and disease. These master regulators can be thought of as the central node of the complex network, having a strong effect on all of the following functions – target these central nodes and you can have wide-reaching effects with comparatively little effort.

Ground-breaking work indeed, published in Nature in 2010 with Dr Carro as the first author (the place traditionally reserved for the scientist who performed the lion’s share of the work). Nature, of course, is a goal for almost every scientist in the biology or health fields, accepting only ground-breaking scientific discoveries. This is easily seen in the reception given to Dr Carro’s paper, having been cited in almost 300 other scientific works and having been selected as one of the top 50 cancer biology studies.

During this work, the collaborative study also indicated a possible role for a transcriptional repressor protein known by the incredibly catchy name of ZBTB18. Transcriptional repressors act to prevent the expression of genes, effectively acting as an off-switch in the network. ZBTB18 was found to be very common in healthy brain tissue, completely absent in glioblastomas, and so could potentially be acting as a tumour suppressor – blocking the development of pre-tumour cells. ‘Given this function and the connection to the mesenchymal signature,’ commented Dr Carro, ‘I was interested in studying the role of ZBTB18 and its mechanism of regulation in glioblastoma in greater detail.’

Through a lot of further work Dr Carro and her group were able to identify several factors which could support the idea of ZBTB18 as a tumour suppressor. The existence of the protein was shown to block the expression of mesenchymal genes, cells lacking the tumour suppressor quickly switched into the highly invasive mesenchymal phenotype. Similarly, when the gene for the protein was put back into tumour-forming cells they were much less capable of forming new tumours. This work (currently in preparation for publication by Dr Carro’s group) thus points the way for new inhibitors of cancer development.

One protein does not make a cure, however, and Dr Carro is not one to rest on her laurels. Having already identified one potential candidate, her next goal is to, in her words, ‘identify and characterise ZBTB18 interacting proteins to get more insight into its repressive mechanism. ZBTB18 occupies a nodal position in the overall transcription network, which means that there are many potential interacting proteins to be studied. As she commented, ‘Given its putative role of tumour suppressor, I believe that understanding the mechanism and regulation of ZBTB18 could allow for the identification of new molecular targets. These could potentially re-activate the ZBTB18 tumour suppressor function in glioblastoma cells and hinder their malignant properties.’ In other words, ZBTB18 is a promising target for the development of therapeutics which would turn it back ‘on’ in glioblastoma cells, thus slowing down the spread of the tumour. 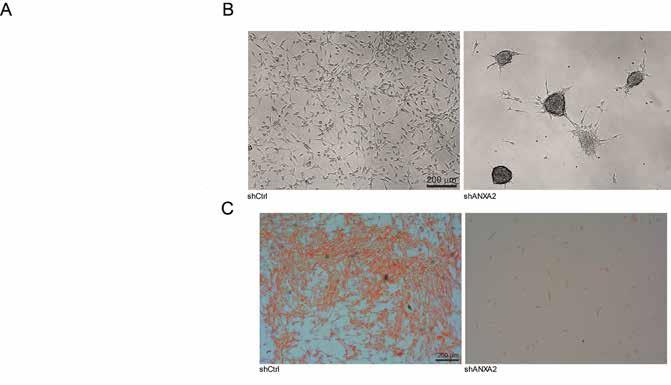 ANXA2 is connected to the mesenchymal subtype of glioblastoma and plays a role in patient survival (A). ANXA2 silencing affects tumour cells morphology (B) and mesenchymal differentiation (C).

Dr Carro’s team have also investigated the involvement of other genes (not transcription factors) in the pathogenesis of glioblastoma. A recent finding is that the Annexin 2 (ANXA2, a calcium dependent phospholipid binding protein which is aberrantly expressed in various human cancers) is involved in the invasive mesenchymal subtype of glioblastoma. In collaboration with Dr Nelander’s group at Uppsala University, the team used a network analysis to determine separate transcriptional, epigenetic and genomic regulators of various subtypes of glioblastoma. Epigenetic modulation of ANXA2 was found to drive the mesenchymal subtype of the cancer. Excitingly, this discovery could provide a promising new drug target for the treatment of glioblastoma. Since ANXA2 is mainly located at the cell membrane compartment, it would be a very convenient target because, differently from transcription factors, it would be more easily accessible and provide a new and effective way to reduce the mortality and morbidity of glioblastoma patients. In fact, there are quite a few chemical compounds able to halt ANXA2 function, some of them already under investigation for a potential use in cancer therapy; most of these compounds derive from chlorotoxin, a peptide originally isolated from scorpion venom.

With so many projects on the go at once, it is difficult to see how Dr Carro manages to find any free time at all. Her secret lies in her willingness to form joint ventures between otherwise disparate fields of research. ‘I believe that a requisite to the success of my research has been the ability to collaborate with system biology researchers, efficiently complementing their expertise in order to provide a deeper insight to the biological questions we raised.’ she explains. The greatest advantage of such cross-cultural collaboration is the ability to learn skills which are outside the normal career path. By working with a number of experts in different fields, Dr Carro was able ‘to expand my expertise and collaborations according to the project needs’ – in effect pushing her to broaden her horizons.

Horizons can be a very long way away, so we asked where she will eventually end up, what her ultimate goals would be. Her research, she said, has ‘the ultimate goal of unravelling new opportunities to develop novel therapeutic avenues for glioblastoma.’ Will her work lead to a treatment for glioblastoma? Many patients and their loved ones are hoping that the answer to this question, one day, will be yes. 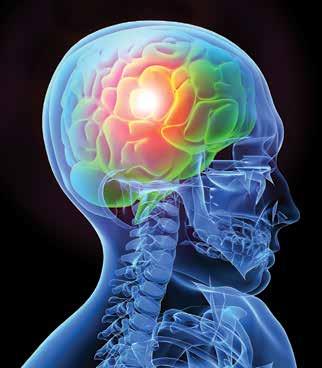 ‘Since my first work as a postdoc, the idea has been to make sense of the recent molecular characterisation of glioblastoma and to identify master regulators of specific subclasses that can be targeted to efficiently downregulate a group of genes associated with the disease in order to offer alternative therapies and ultimately, improve patients’ survival.’ 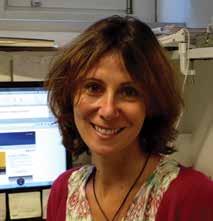 Born in Italy, fluent in four languages, Dr Maria Stella Carro has worked her way around the world – having been a PhD in Milan, a postdoc in New York, and finally reaching her current position as a group leader at the renowned Universitätsklinikum Freiburg, Germany. With her name on many publications, (including two published in Nature), a group of talented researchers under her investigating the genetics of brain tumours and a gift for collaborations, Dr Carro is as motivated as ever about the future of her research. 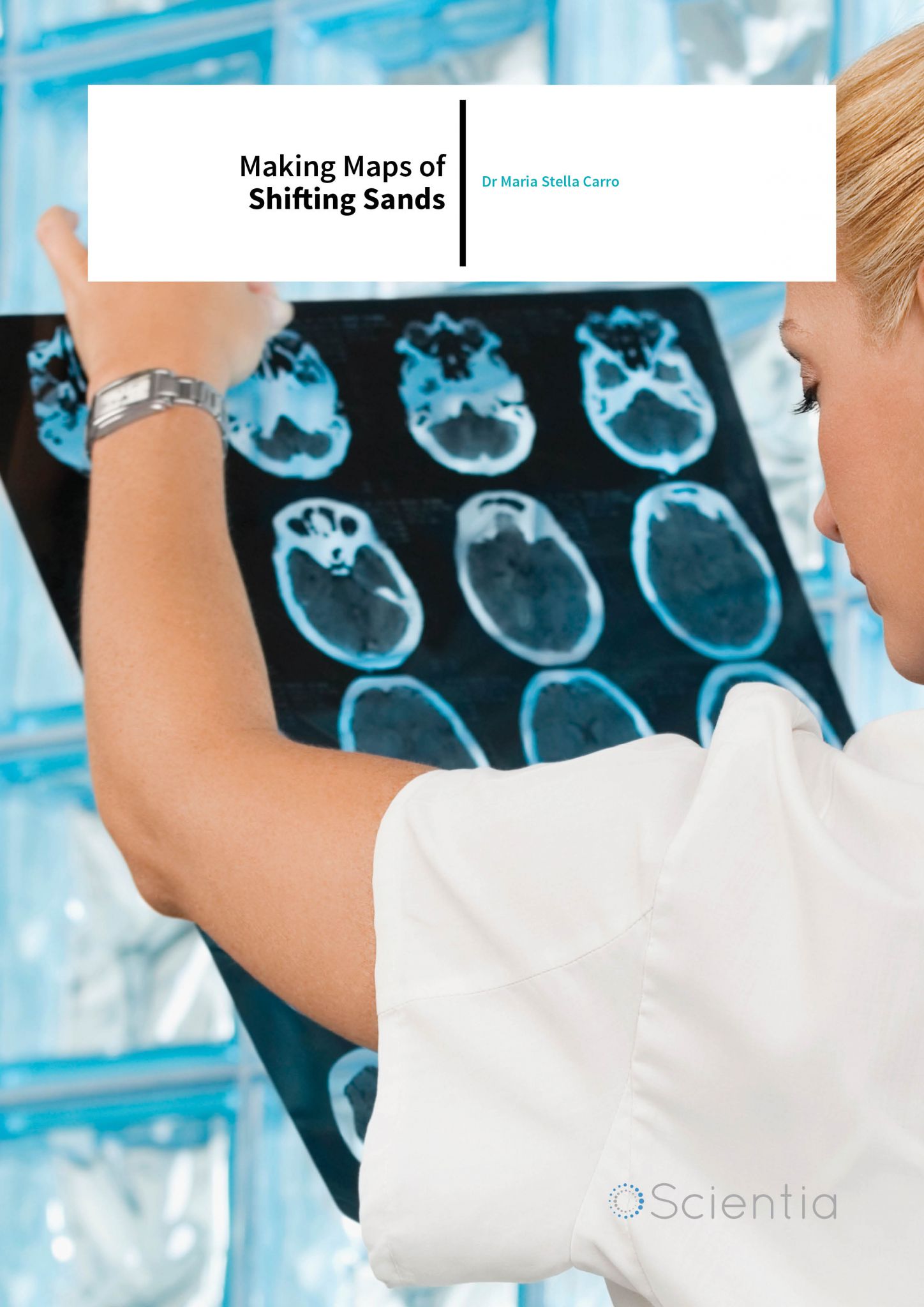