Lionfish are predators that typically inhabit Pacific and Indian Ocean coral reefs. In areas where they have been introduced, they have become troublesome invaders. Populations have spread and grown in some regions to the extent that they are wreaking havoc on local marine ecosystems. Dr Mark Hixon and his team are working hard to combat the lionfish invasion.

One incredibly problematic invader is the lionfish. Lionfish were first reported in the coastal waters of Florida in the 1980s, likely the result of aquarium releases. They then rapidly spread to the south-eastern seaboard of the United States, the Gulf of Mexico, and the greater Caribbean region. Lionfish are predators that target small fish and some invertebrates on coral reefs and other coastal habitats. Given that the invaded ecosystems are not equipped to deal with lionfish, their presence is causing significant damage. To compound the issue, larger predators which could keep lionfish populations under control tend to steer clear because lionfish have venomous spines. As a result, lionfish are proliferating and the damage is continuing.

Dr Mark Hixon is a marine biologist from the University of Hawai‘i at Mānoa. Funded by the US National Science Foundation at Oregon State University, he, his team of graduate students, and postdoctoral researcher Dr Stephanie Green, have worked to understand the ecology and behaviour of lionfish so that the lionfish invasion can be managed. The team focuses their attention on Atlantic areas with substantial populations of invasive lionfish, such as the Bahamas and the Cayman Islands, and on Pacific regions with native lionfish populations, such as the Philippines and the Marianas Islands.

‘The lionfish invasion has been recognised as one of the major ocean conservation threats worldwide. Our work has already benefited reef managers and the public by documenting the negative effects of lionfish and conveying the importance of control efforts.’

Specifically, the research of Dr Hixon and his team seeks to find answers to two key questions: What are the main ecological effects of lionfish on invaded coral reefs? And, do any native coral-reef species provide biotic resistance, that is, the ability to naturally control invasive lionfish populations? With the answers to these questions in hand, they aim to help develop an effective strategy to manage the lionfish threat.

Dr Hixon and his colleagues have conducted multiple field experiments to investigate the effects of invasive lionfish on native species. Specifically, they have been manipulating the number of lionfish on coral reefs, and then examining the impact of these fluctuations on local ecosystems. These experiments have clearly shown that lionfish cause decreases in the populations of many native fishes. In extreme cases, some species are even driven to local extinction. Dr Hixon and PhD student Mark Albins first studied relocated coral and artificial reefs that had been populated with lionfish in order to examine the subsequent recruitment of native reef fishes. They found that lionfish caused, on average, a 79% reduction in the appearance of newly settled larvae over a five-week period. Critically, the study suggested that invasive lionfish could negatively impact Atlantic coral reefs both strongly and quickly – which later investigations confirmed to be correct. PhD student Kurt Ingeman found that populations of fairy basslet – a native coral reef species and popular aquarium fish – are especially impacted by lionfish. Specifically, he observed local extinction of fairy basslet populations on reefs with lionfish but not on reefs with native predators only. Additional studies by PhD student Tye Kindinger showed that lionfish preferentially attack fairy basslet over blackcap basslet, which alters the level of competition between these species, leading to broader impacts within the ecosystem.

Importantly, native fishes do not recognise invasive lionfish as a threat. PhD student Casey Benkwitt found that, although larvae of some native reef fishes avoid settling where native predators are present, they do not avoid settling near lionfish. This behaviour further jeopardises these small prey.

In addition to direct predation effects and loss of biodiversity, lionfish can have flow-on indirect effects. For example, PhD students Tye Kindinger and Mark Albins found that lionfish reduce both the populations and the individual feeding rates of herbivorous fishes, which are species that remove seaweed and algae. Grazers are vital to reef ecosystems because excess seaweed and algal growth can smother and kill corals. As lionfish are responsible for reducing grazing, they are indirectly hastening the demise of already stressed coral reefs in invaded regions. Clearly, large, invasive lionfish populations pose a significant threat to marine ecosystems and they need to be controlled. Albins and Hixon commented in 2008, ‘while complete eradication of lionfish in the Atlantic is likely impossible, it would be prudent to initiate focused lionfish control efforts in strategic locations.’ To understand how best to control lionfish populations, the team has been assessing the factors that contribute to their proliferation. Primarily, the success of lionfish is associated with a lack of biotic resistance.

The term ‘biotic resistance’ refers to the ability of local species to keep populations of invasive species in check, or to eradicate them completely from an affected area. PhD students Mark Albins, Alex Davis, and Tye Kindinger found that native species, including potential competitors such as territorial damselfishes and ecologically similar groupers, do not inhibit invasive lionfish in any substantial way. This lack of biotic resistance has provided lionfish a free reign to multiply and cause further damage. But could parasites offer a solution?

The team specifically examined the role of parasites in controlling lionfish abundance. In a study led by PhD student Lillian Tuttle, in collaboration with former PhD student Dr Paul Sikkel and colleagues, they found that fewer lionfish were parasitised in their Atlantic habitats, where they are invaders, compared with Pacific habitats where they are native. Unfortunately, the relatively low infection rates of lionfish in the Atlantic indicate that parasites are not likely sources of biotic resistance to lionfish invasion. Indeed, finding an effective biological solution for lionfish population control has proven impossible thus far, so other options are being considered. 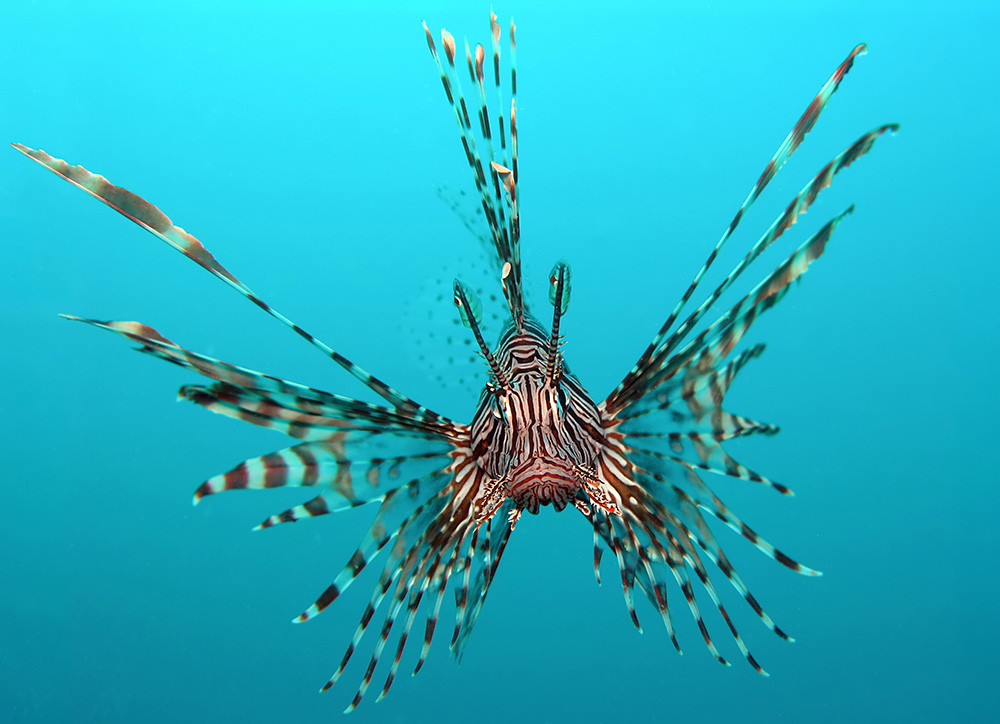 Surprisingly, towards the end of the team’s decade-long study, lionfish abundances in the central Bahamas were declining despite there being no lionfish control efforts in the region. Joined by former PhD students Tim Pusack and Chris Stallings, the team investigated the possible reasons behind this trend. They suggested that some combination of poor larval supply and survival rates, hurricanes, and new interactions with native species may be accountable. While the team acknowledges that further studies are required to determine whether the declines will persist, as well as the exact cause, getting to the bottom of this observation will likely assist future conservation efforts.

In the meantime, human consumption has been suggested as the best method of lionfish population control, and lionfish derbies and fisheries are appearing throughout the invaded range. However, some have expressed concern that lionfish may be poisonous to humans. The specific toxin of concern is ciguatoxin, which some marine species acquire by ingesting certain marine microorganisms, which are concentrated up the food chain. Some tests have indicated that lionfish may be ciguatoxic. However, research by Dr Christie Wilcox and Dr Hixon suggests that ciguatera tests on raw lionfish flesh are likely to be inaccurate, so human consumption as a means of dealing with lionfish should not be ruled out. The solution is to test lionfish flesh for ciguatoxin after cooking, which will provide an accurate test. In any case, there have been no cases reported to date of lionfish causing ciguatera. 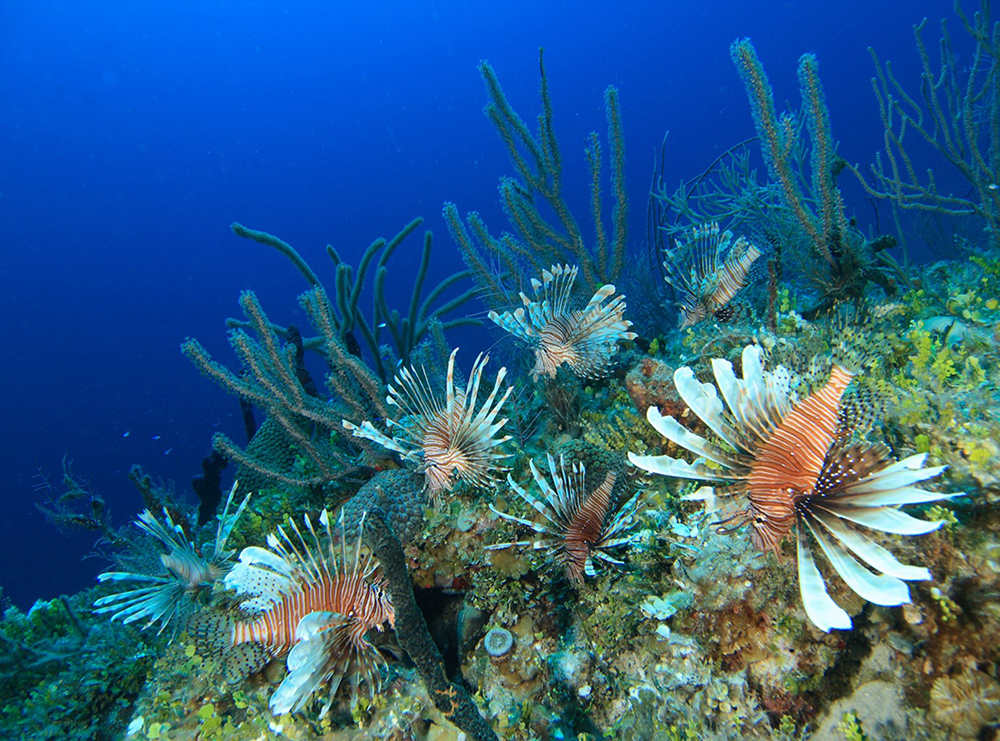 Communicating Their Findings to the Public

Considering the environmental and economic impacts of increasing lionfish populations, the issue should be of global concern. As Dr Hixon relates, ‘the lionfish invasion has been recognised as one of the major ocean conservation threats worldwide.’ As such, communicating their findings to the public is one of the team’s primary goals. To that end, they have utilised several methods of public communication.

To date, dissemination of their lionfish research has included numerous public presentations, a television episode (Saving the Ocean), a TEDx talk and over 30 peer-reviewed publications in scientific journals (available at http://hixon.science.oregonstate.edu/content/highlight-lionfish-invasion). The results of these efforts are promising. ‘Our work has already benefited reef managers and the public by documenting the negative effects of lionfish and conveying the importance of control efforts,’ Dr Hixon explains.

In conclusion, given that invasive lionfish pose a significant threat to the environment and the economy, understanding their ecological effects is critical to conservation strategies. Furthermore, supporting the collaboration between scientists and the public to combat the problem is vital. Thankfully, the work of Dr Hixon and his team reflects significant progress in meeting these challenges. 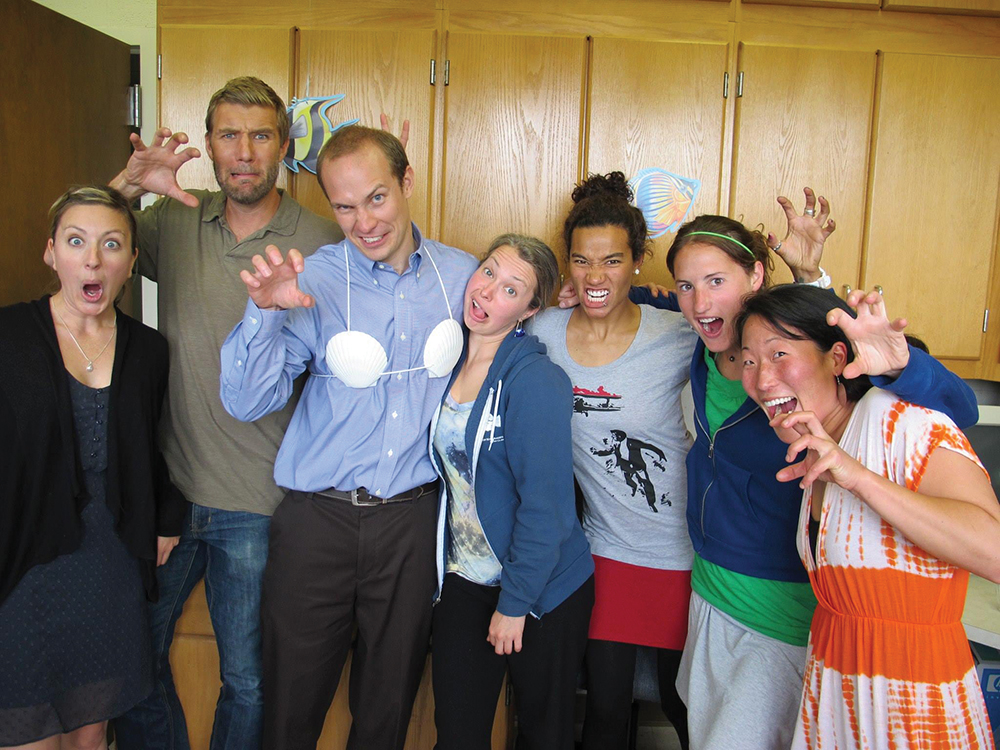 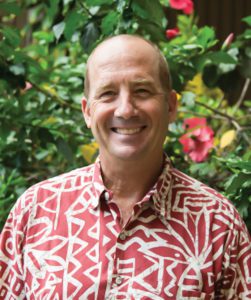 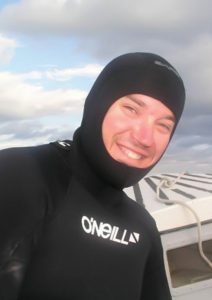