Essentially un-researched until now, corm rot disease has had detrimental effects on the Puerto Rican agricultural industry. Here, Dr Martha Giraldo and her research team at the University of Puerto Rico collaborate with local farmers to investigate the source of this persistent pest.

Arracacha, or Arracacia xanthorrhiza Bancroft, is one of the most ancient, tuberous crop plants of South America. Resembling a slightly plump parsnip, it presents celery-like shoots, growing up to two meters in height. This similarity landed the plant with its nickname ‘apio’ in Puerto Rico – that’s Spanish for celery by the way. Its pleasant flavour, low maintenance, easy digestibility, superior starch and high levels of P-carotene, ascorbic acid, Vitamin A, phosphorous and calcium, put this perennial plant in high demand.

The main body of apio comprises a large ‘corm’, accompanied by a multitude of much smaller, immature cormels. These are broken up for use as new vegetative seeds or propagation material during crop practices in the agricultural industry. The corm sits at the earth-air interface, with its collection of edible roots plunging downwards, and the celery-esque shoot rising sky-high.

The local people in the mountains of Puerto Rico have been cultivating apio since 1903, giving it traditional status throughout the region. Up until 2004, the farming community prospered, with a building demand for apio both internally and externally. This generated relative wealth and affluence, especially in the central region where humidity and highland terrain make suitable crop plants difficult to come by.

Since 2004, however, apio farmers have witnessed mammoth revenue decline, perpetrated by a ‘corm rot’ disease. This under-explored ailment causes rotting to both the corm and roots, alongside wilting of the shoots. With most farmers in the central region experiencing resultant 50–100% yield losses, corm rot has caused the largest negative impact on apio farming over the past decade. Each year, post-harvest decisions become more difficult to make: how much to sell? how much to retain for propagation? One small mistake results in a financially formidable year ahead.

Farmers who continue to cultivate apio run the risk of corm rot-override. Even with its price and import continuing to rise, year on year, apio has become a challenge for Puerto Rican farmers. With a germination rate of less than 45% in the region, the area of farmland in central Puerto Rico decreased from 196.5 to 82.5 hectares between the years of 2002 and 2012.

To say that research into the cause of corm rot disease is lacking is an understatement. With only four published papers on the topic, dating all the way back to 1999, Dr Martha Giraldo, of the University of Puerto Rico, was determined to implement strict research into potential corm rot-causing pathogens, as an attempt to bring structure to this agricultural immediacy.

Multiple conflicting conclusions as to the disease-causing agent have so far been put forward: some claim a combination of the oomycete, with fungus-like Phytophthora palmivora, Rhizoctonia and Fusarium causes the disease, while others are confident that Erwinia bacteria are acting alone. More progressive studies show that two types of nematode, Meloidogyne and Pratylenchus, are potential instigators. Optimal preventative measures differ significantly for each proposed conclusion, so how can we take action with so much uncertainty?

Here, we detail how Dr Giraldo’s research team strive to provide corm rot-free tissue culture and identify a nematode species that is prolific in affected apio fields. As well as providing farmers with propagation material, tissue culture allows the genetic diversity in apio plants to be conserved. Pathogenicity studies performed by the team allow them to offer better advice concerning agricultural practices, potentially re-revolutionising the use of apio as a sustainable crop plant in central Puerto Rico. 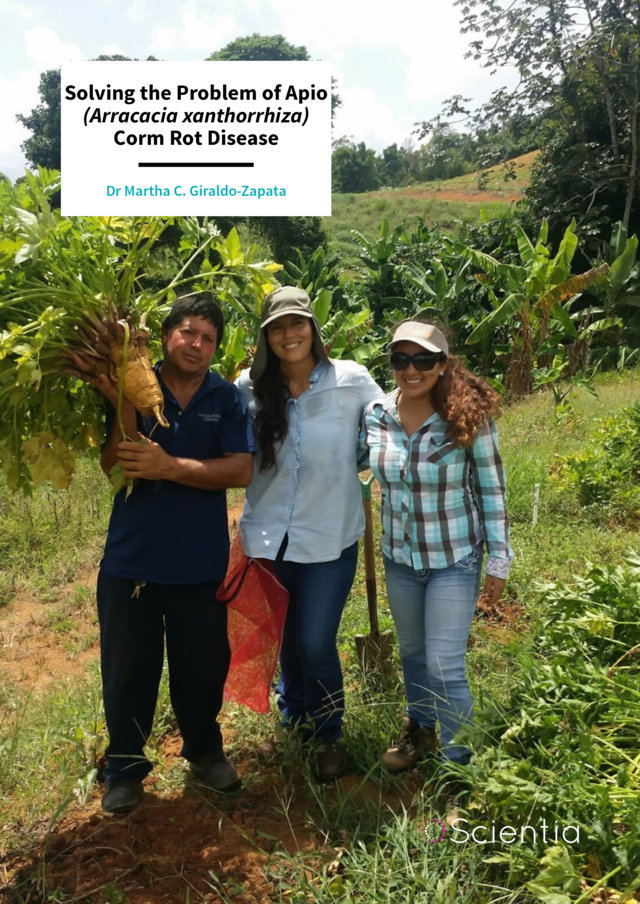 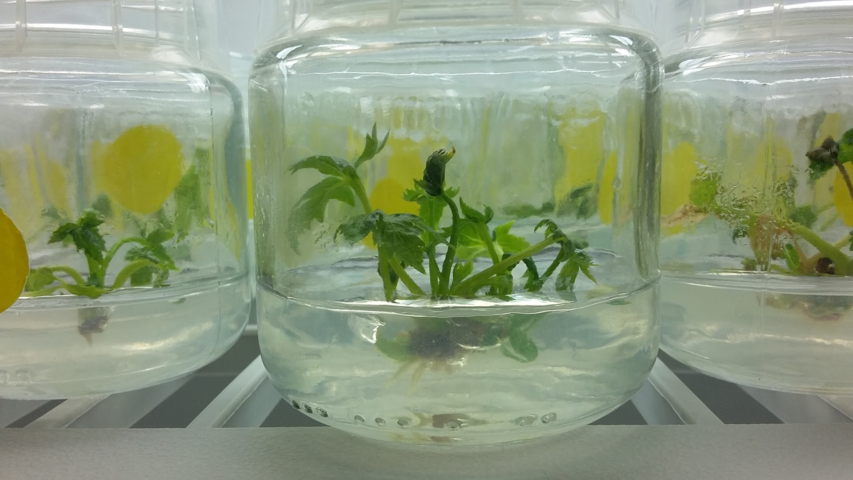 Individual nematode populations were extracted from samples using Baermann’s funnel – a scientist’s fancy version of a filter. The team then extracted living nematodes from the soil, and examined and identified them under a microscope. By measuring discreet portions of soil at a time, and considering the degree of corm rot-presence where each sample was taken from, Dr Giraldo’s team were able to get an idea of how pathogenic each species was.

On one of the farms, the team collected a more extensive selection of soil samples. Not only did the researchers test these for nematodes, but also for plant pathogens, bacteria, oomycetes and fungi. These microbial masses were grown up to form colonies in the laboratory, and Dr Giraldo’s team of scientists determined the density of each and its relation to corm rot. 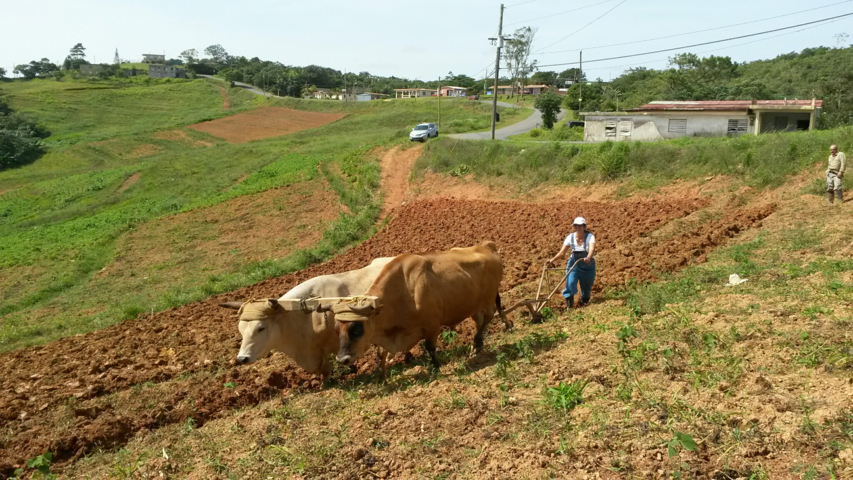 A Tally of Treatments

Upon identifying R. reniformis as a potential corm rot-causing agent, Dr Giraldo and her colleagues implemented an integrated management experiment throughout Luis Rivera Berrios’ Barranquitas fields. They did so by applying eight different treatments in specific spaces where corm rot had prevailed in the past.

The first involved solarisation prior to apio-introduction: mulching the target soil, before topping it with a transparent heat trap layer in the form of polyethylene. This provided a cost-effective method of ‘bleaching’ the treated soil, exclusively utilising energy from the sun. The second apio-enhancing strategy involved the use of biological and chemical products as agricultural microbicides, applied directly to the topsoil used for planting. Third, the team took the solarisation protocol to the next level, transferring this compost into the growing region, before any growth had started.

Treatment number four was applied to the propagation material itself. Vydate-L, which kills insects and nematodes, was applied 24 hours before planting. This allowed time for the chemical to establish itself, for more successful sprouting. Tagetes, a pest and pathogen antagonist, and green manure, made up the fifth treatment. Upon application, the team allowed a two-month period before starting the apio propagation process. In the sixth treatment group, the team used sweet corn as a nematode tolerant and a short cycle crop to harvest between each apio yield. This technique is similar to crop rotation – with corm rot-specific pathogens being put off by periodic sweet corn presence.

The seventh treatment involved an integrated control management system, comprising a combination of the second, third, fourth and fifth treatments mentioned above. The team’s eighth group provided a control for comparison – farming in the traditional style, which simply comprised of crop fertilisation and regular weeding. This control group was vital for the researchers to determine the effectiveness of each implemented action.

The team worked out the effectiveness of each of their seven treatments in comparison to that observed in the eighth control group. They used statistical tools to analyse all relevant factors: pathogen populations present, disease frequency, average corm weight, and total mass of harvestable material. The team tested each group before each treatment was applied, on the day of planting, mid-crop cycle, and during harvest. Dr Giraldo could then paint a picture of the fluctuations in pathogenic presence for each investigated method, gaining an idea of which treatments to enforce. 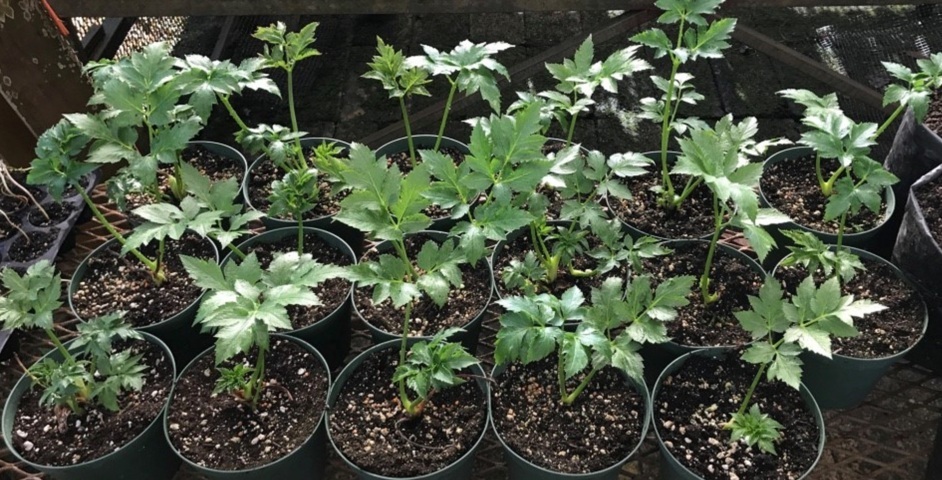 Tissue culture involves growth of new plant matter from tissue samples taken directly from the field. For success, four distinct steps are required: establishment (specific tissues are isolated from a disease-free mature plant); multiplication (growth on nutrient-rich media); pre-transplant (stimulation of root growth in immature plantlets); and hardening (preparation of the plant for true growth conditions). Up until this point, the plant will never have experienced soil, sunlight or weather, and the final hardening phase often provides the most complex of all the challenges.

The main challenge presented itself to Dr Giraldo and her colleagues in the form of behavioural variation between local apio varieties. Further factors that inhibited their progress included the successful development of plantlets, and simulating root development before transplanting the plantlets.

Using pathogenicity tests for validation, the researchers were able to establish a useable protocol for producing, multiplying and successfully growing an adequate volume of apio. They did so using ethanol, Clorox (a household bleach) and Tween (an emulsifier) to sterilise the tissue, followed by multiplication in a general culture medium called ‘Murashige and Skoog’.

Once established, this method allowed the team to consistently isolate non-contaminated tissue, allow it to multiply at a rate of 3.5–4 new shoots over each three-week period, and produce 95% rooting plantlets, in the lab. Dr Giraldo’s ultimate goal is to provide disease-free arracacha propagation material eventually derived from these plantlets to be used for consistent successful growth on Puerto Rican farms. 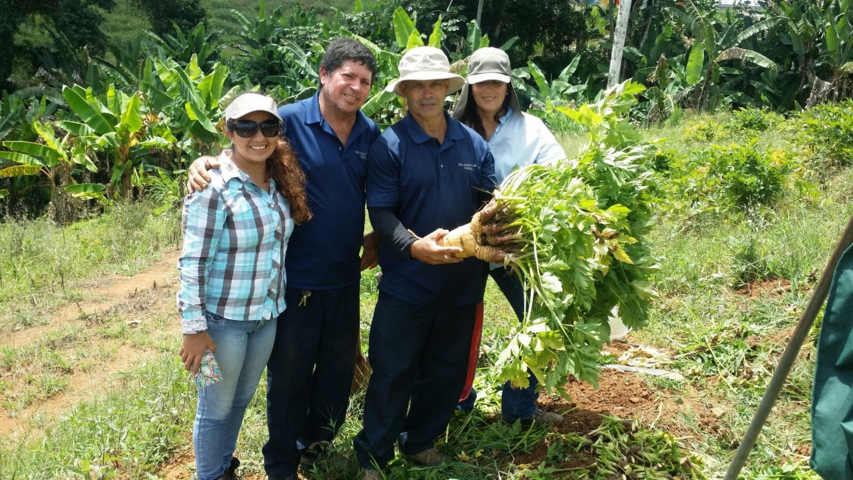 Upon extensive research, experimentation and investigation, Dr Giraldo and her team have landed upon a series of solutions to their primary concerns. They are developing workshops for agricultural extension agents and local farmers as a means of communicating the integrated crop management systems required for effective disease control. These workshops will also provide detailed information regarding corm rot disease as a whole, allowing farmers to make more informed apio-based decisions when cultivating their land. Training meetings and agricultural field days have been organised for local farmers, targeted at promoting continued use of apio as a crop.

Alongside these positive developments, several unanswered questions remain yet to be answered. Dr Giraldo refuses to cease her studies until every hurdle has been hopped and all barriers broken.

Existing shortfalls lie in the realms of devising consistent successful tissue culture procedures. Two of the team’s main focuses include developing specific tailored methodologies to account for the variation in local apio varieties, and stimulating root growth before transplanting plantlets. The team is also working to provide a method for reliable hardening.

Questions uncovered throughout the project have led Dr Giraldo to embark on additional enquiries alongside her ongoing studies. A new aim involves the construction of a decontamination protocol for farmers whose propagation material is already infected. This could provide a means of role reversal as the Puerto Ricans put a stop to corm rot. 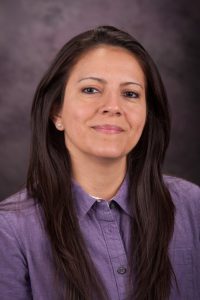 Since graduating with a degree in Biology from the Universidad del Valle, in 1996, Dr Martha Giraldo has displayed a consistent passion for developing solutions relating to agricultural plant pathology. Her career since then has included a Research Assistant role at the International Center for Tropical Agriculture, a PhD in Plant Pathology, and her current position of Assistant Professor in the Department of Agro-Environmental Sciences at the University of Puerto Rico. In receipt of multiple internationally recognised certifications, such as the American Society of Microbiology’s ‘Outstanding Young Investigator Award’, Dr Giraldo has certainly brought value to the scientific community. Having acted as reviewer for five relevant scientific journals, been invited to speak at numerous conferences and seminars, and produced an extensive list of published papers, Dr Giraldo’s contribution to agricultural science is second to none.