May 30, 2019Biology, Health and Medicine, Psychology and Neuroscience

Our nervous system has such an important function in our body that neurons have their own bodyguards. Known as glial cells, they protect brain cells against injury and prevent damage. Dr Mary Logan and Dr Sean Speese, both based at the Jungers Center for Neuroscience Research, School of Medicine, Oregon Health and Science University, USA, want to understand how these glial cells sense and respond to neuronal stress and damage in the adult brain. The Jungers Center was established because of a generous gift from Frank and Julie Jungers, and has the goal of uniting basic science and the clinic in developing treatments for debilitating neurodegenerative diseases.

The Mystery of Glial Cells

When we think of brain cells, we probably think of neurons. But there is another type of cell in the brain that outnumbers neurons by about 10 to 1. These are called glial cells, and despite their abundance, researchers understand very little about what these cells can do.

For many years they were ignored and considered simply as something to keep neurons in place – hence the name glia, from the Greek word meaning glue. However, some surprising functions are starting to come to light. It turns out these cells work as guardians for neuronal cells and can detect cellular damage. Glia cells respond quickly to trauma, caused by accident or neurodegenerative disorders, by finding affected areas and cleaning up damaged or dying neurons.

Researchers are aware of only a few players in this mechanism, with the Draper receptor being an exciting new receptor implicated in glial immune responses. In 2012, Dr Mary Logan described the key activating and inhibitory features of Draper required for glial cells to clear degenerating neurons in the adult brain, although precisely how Draper contributes to glial recognition and destruction of damaged cells is still unclear.

With a collaboration going back to 2010, Dr Logan and Dr Sean Speese at the Jungers Center for Neuroscience Research, School of Medicine, Oregon Health and Science University, USA, want to solve this mystery and have a long list of exciting questions. How do glial cells know which cells are dying and which ones are healthy? What are the cellular pathways that control the activity of glial cells? What regulates changes in glial cells in response to damage?

It’s Not Easy Getting Old

Getting old is not easy. In addition to stiff joints and deep wrinkles, old age is the greatest risk for neurodegenerative disorders. Drs Logan and Speese believe this high risk is partly caused by a decrease in the ability of glial cells to protect neurons in the aged brain.

Using fruit flies as a model to study the brain, the team demonstrated that glial clean-up of damaged neurons is slower in old animals, due to a drop in the critical component Draper. In older cells, this receptor often fell below the minimum threshold needed to activate the response, significantly delaying any scrubbing operation. The researchers also showed that increasing the levels of Draper after neuron damage was enough to revert this effect in older animals, leading to speculations about new therapeutic targets for conditions associated with dysfunctional glial responses.

‘Although many proteins are undoubtedly affected by age-dependent decline in translation/stability, we propose that loss of the Draper receptor speciﬁcally impairs the activity of aged glia,’ explained Drs Logan and Speese. 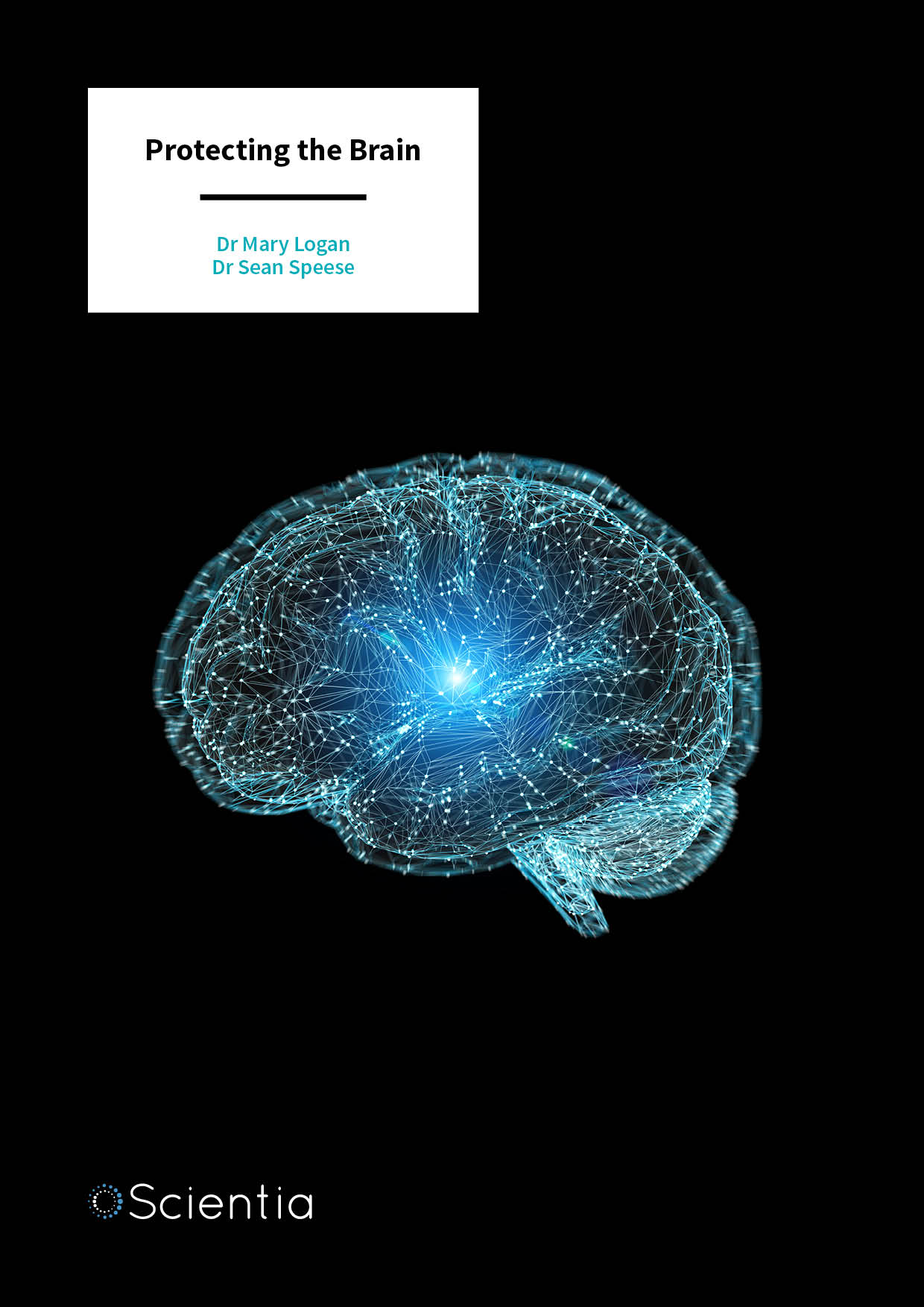 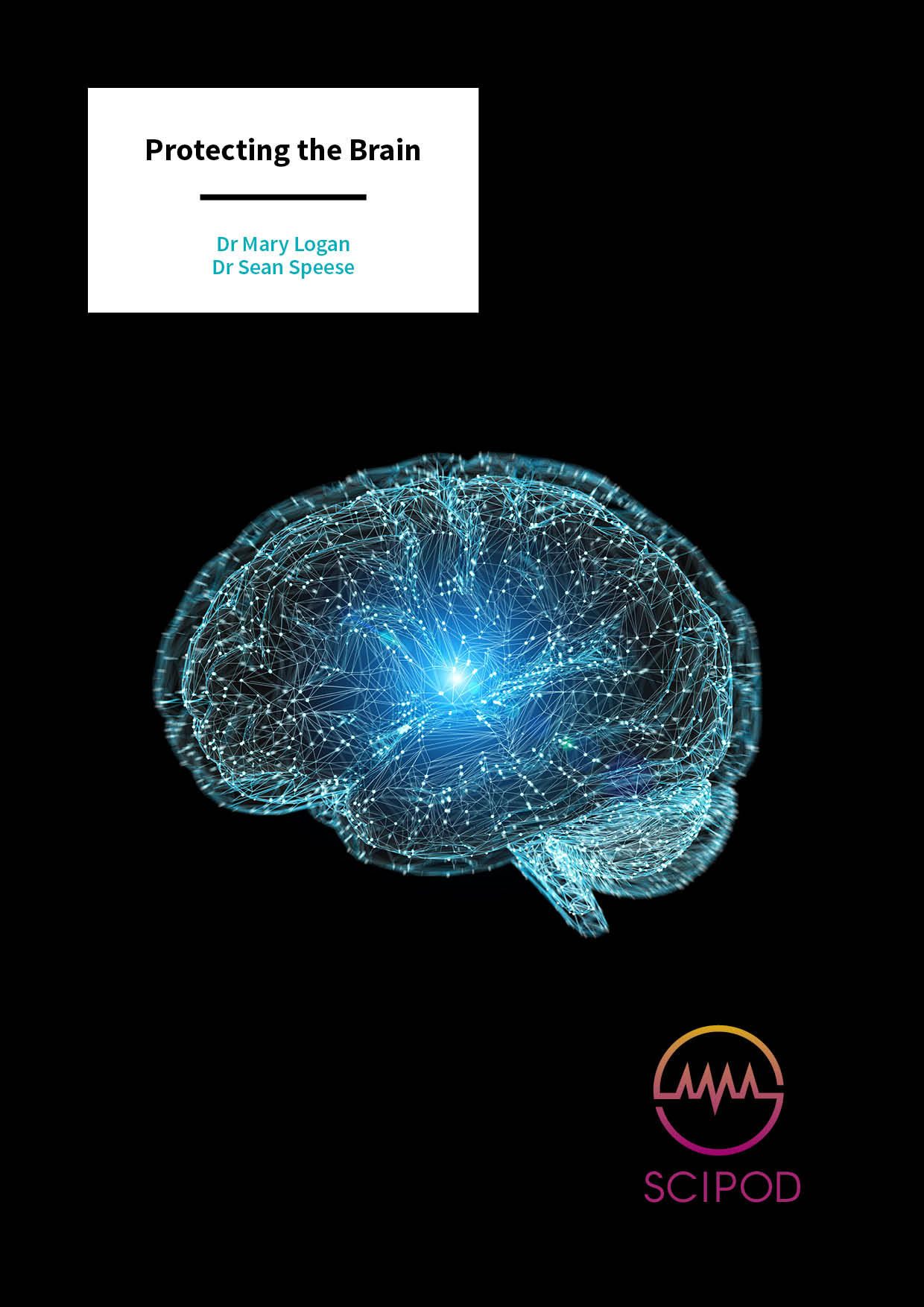 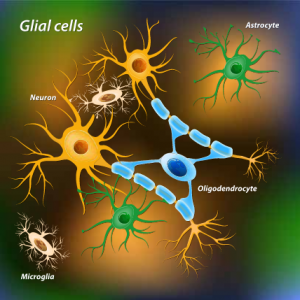 Draper seems to be a crucial player in neuronal protection. However, there is still a great deal to learn about how this receptor can help glial cells detect damage in nerve cells, and Drs Logan and Speese are keen to fill in these blanks.

As a way to impose damage in neurons, the team used a well-established method to cut the olfactory nerves in fruit flies. With this approach, they discovered a second type of receptor that is also involved in this process. This new receptor is called the insulin-like receptor and its activation within just a few hours of the injury is essential to stimulate the production of Draper and clear away debris. Not surprisingly, inhibition of this receptor prevents upregulation of Draper and proper glial immune responses after brain injury.

‘Our work now points to insulin-like signalling as a novel local communication relay between neurons and glia that initiates critical glial immune cascades,’ said Drs Logan and Speese. This receptor is known for its involvement in cell growth and energy metabolism among others, but this is the first-time insulin-signalling has been implicated in glial responses to neuronal damage.

There are still many questions to answer, but the good news is that these results will encourage research groups to re-think the role of insulin-like receptors in the brain. Findings to date may even open the door for future therapies to control this signalling mechanism in a variety of conditions. 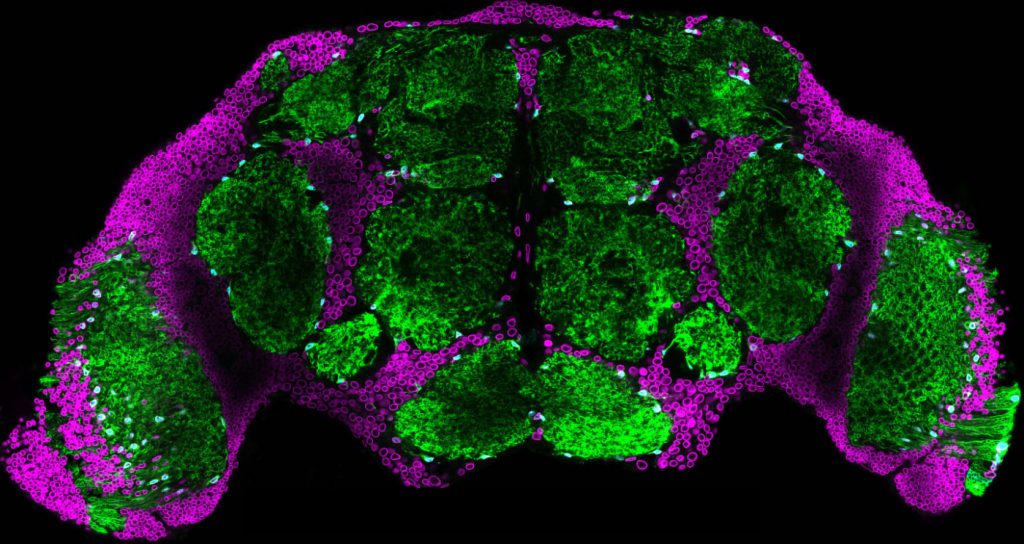 To Get to All Nooks and Crannies

In order to complete their mission to remove cell debris from the brain, glial cells have the ability to change cell shape and size. This striking ability ensures that these cells can reach even the hard to get places to remove dead cells. However, our understanding of how these dynamic responses operate and exactly what components are involved in this process is very limited.

To answer these questions, the researchers decided to conduct an in-depth analysis of all the genes involved in this process. In this case, they cut nerves in the legs and wings of adult flies and then performed a genomics screen on the ventral nerve cord tissue, aka the ‘spinal cord’ of the fly. ‘We have developed a novel in vivo injury model in the adult Drosophila and defined a comprehensive dataset of conserved genes that are acutely up- and downregulated in response to nerve injury,’ said Drs Logan and Speese. ‘This strategy is revealing exciting new factors that are required for glia to sense and/or respond to degenerating neurons […] and provides a foundation for experiments that will rapidly advance our understanding of innate glial immunity mechanisms.’

In addition to the expected increase in the receptor Draper which the team already knew was involved, they found many other changes. One of the most relevant increases involved a protein called matrix metalloproteinase-1 (MMP-1). Crucially, they showed that this protein relies on Draper to function and, when both are present, glial cells will properly clear degenerating cellular debris. Loss of MMP-1 inhibits glial activity and delays clearance of degenerating neurons.

Going back to glia’s morphological changes, the researchers suggest a model in which MMP-1 improves the ability of glial cells to infiltrate into all the ‘nooks and crannies’ where dead or damaged neurons may hide. ‘In addition to providing a wealth of new data for future research,’ commented Dr Logan, ‘this project has identified MMP-1 as the first target transcriptional downstream of the Draper receptor and also revealed an interesting new role for MMP-1 in remodelling required for glia to infiltrate dense regions.’

‘This body of work highlights the Draper pathway as an exciting new therapeutic candidate to boost innate glial immune activity, including phagocytosis, to enhance neuroprotection with advanced age.’ 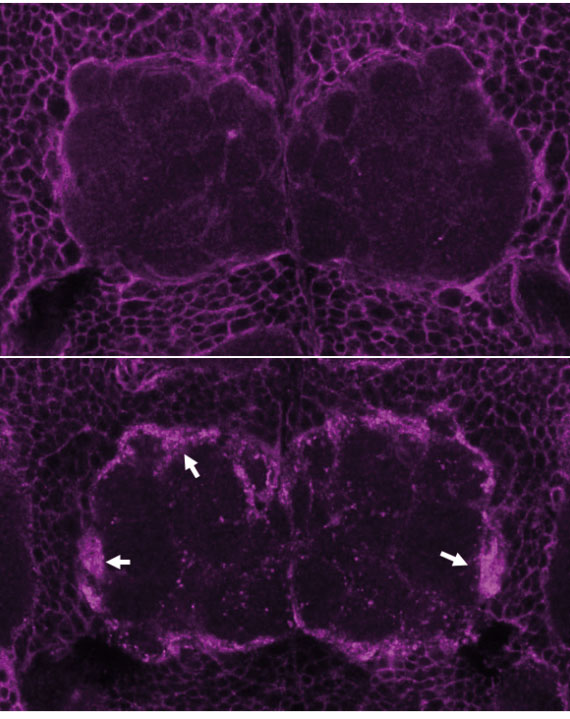 Continuing their quest to unveil the mechanisms behind glia’s protective function, Drs Logan and Speese decided to turn their attention to when things start to go wrong in the brain. As the primary immune responders in the brain, it’s easy to see how glial cells can be implicated in the onset and progression of neurodegenerative disorders. Alzheimer’s disease is just one example.

One important feature of Alzheimer’s disease is the formation of protein deposits outside the cells. This is known as plaque accumulation, composed of short peptides called amyloid beta. The researchers showed that increasing these damaging peptides induces Draper activity in glial cells, which in turn, is known to trigger expression of the metalloproteinase MMP1 and stimulate glial activity in the presence of neural injury. ‘Understanding precisely how glia recognise and degrade amyloid-like peptides will provide additional molecular and genetic targets to pursue for disease treatment,’ noted Drs Logan and Speese.

To confirm Draper’s involvement, blocking this receptor in an Alzheimer’s disease fly model exacerbates the problem, resulting in increased plaque formation, further locomotor dysfunction and reduced longevity in flies; whereas its increase rescued most cases, at least partially. Based on these findings, Drs Logan and Speese suggest a mechanism by which glial cells use Draper to activate a signalling cascade involving MMP1 and other components to possibly find and destroy plaques developing in the brain. ‘We have discovered the Draper pathway provides neuroprotection in a model of Alzheimer’s disease. Our work suggests that glial cells use the Draper receptor to find [amyloid beta] peptides and destroy them,’ said Dr Logan. 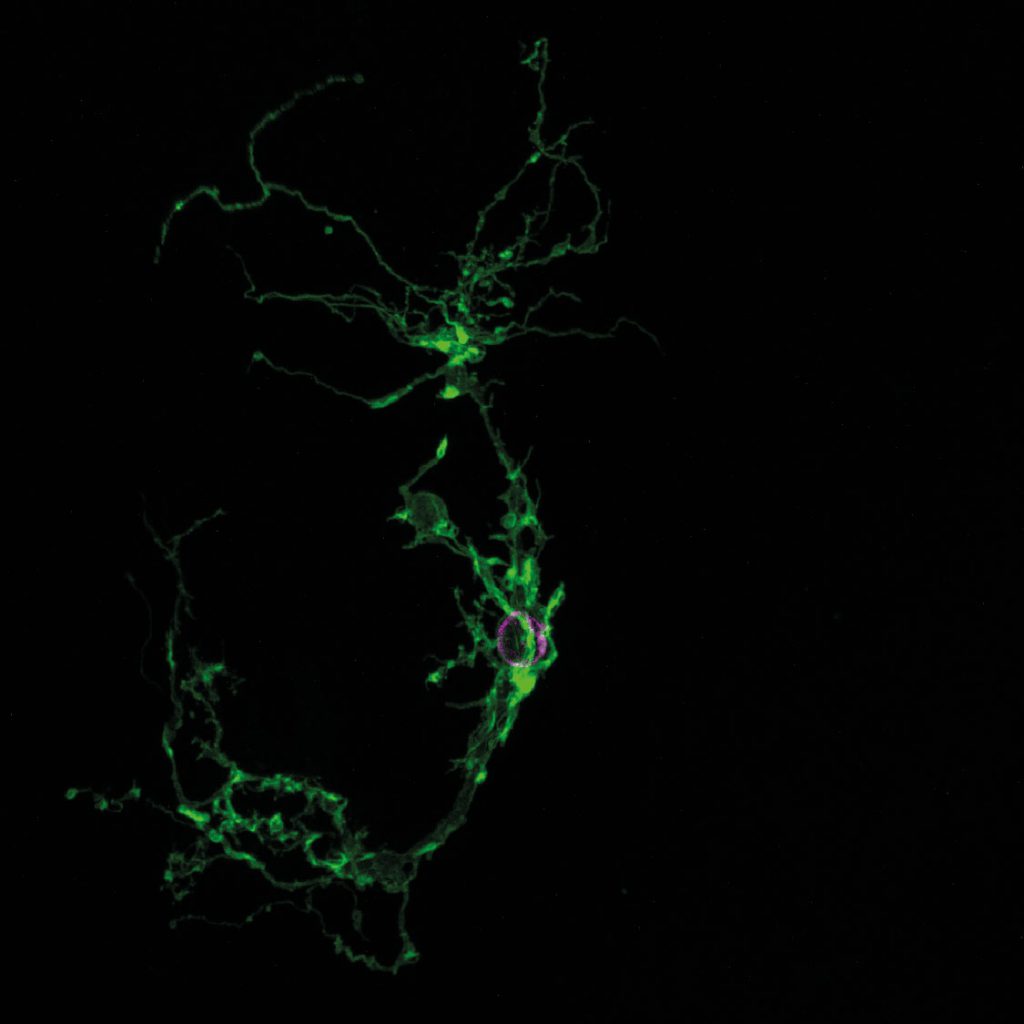 Glial cell in the adult brain in which the membrane is shown in green and the cell nucleus is shown in magenta. Credit Maria Purice.

From Flies to Humans

Drs Logan and Speese use fruit flies in all their experiments because they offer a powerful in vivo model to rapidly explore glial activity, but ultimately, the goal is to understand what happens in humans. The researchers believe there is no reason to assume that these results cannot be translated to mammals, and humans in particular. Just as in flies, Draper is also required for the glial activity elicited in response to degenerating or dying neurons in mammals.

The researchers propose that it is possible to use this knowledge to develop potential new therapeutic approaches to treat neurodegenerative disorders, such as Alzheimer’s disease and others. ‘This body of work highlights the Draper pathway as an exciting new therapeutic candidate to boost innate glial immune activity, including phagocytosis, to enhance neuroprotection with advanced age,’ concluded Drs Logan and Speese. 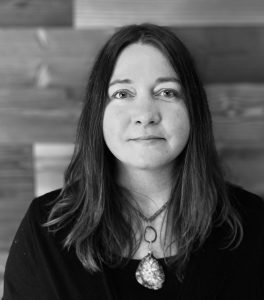 After four years at NPS Pharmaceuticals as a research associate followed by a PhD in neuroscience from the University of Utah and a postdoctoral fellowship at UMASS Medical School, Dr Mary Logan joined Oregon Health and Science University in 2010. During her career, Dr Logan has won multiple awards, including the Ken and Ginger Harrison Scholar Award in Neuroscience Research in 2016 and the Ken and Ginger Harrison Term Professor Award in Neuroscience Research in 2017. In addition, Dr Logan is a regular reviewer for many journals, including Cell and Nature, as well providing research supervision for a number of students and postdoctoral fellows. For the past few years, Dr Logan’s team has been investigating how glial cells inform brain function and health. Currently, their focus is to understand how glial cells detect and respond to neuronal stress and damage in the brain. 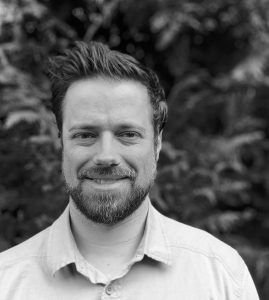 Dr Sean Speese earned a doctorate from the University of Utah in 2005 then completed a post-doctoral position at the University of Massachusetts Medical School. He then joined Oregon Health and Science University in 2010 to work with Professor Logan in the Department of Neurology. Honours and awards include the Oregon Scientist Development Award from the Oregon Health and Science University Medical Research Foundation in 2013, the National Institutes of Health Ruth L. Kirschstein NRSA post-doctoral fellowship in 2008, and the Jungers Center for Neuroscience Research – Fred Fields Scholar in 2015. Currently, the main aim of his research group is to understand the molecular underpinnings and function of a novel nuclear RNA export pathway termed Nuclear Envelope Budding.