Native grasses have great environmental benefits, not least as a food source for a wide variety of butterfly and moth species. However, native grassland habitats are some of the most endangered in North America, with less than 1% of original tallgrass prairie remaining. Dr Mary Meyer and her colleagues at the University of Minnesota have been working to evaluate the use of native grasses by butterfly and moth species. They are also working with garden centres to increase the volume of native grasses sold and grown in Minnesota.

Benefits for Butterflies and Beyond

The widespread conversion of land for agricultural and urban use has led to drastic declines in native grassland habitat in North America. This has put native butterflies and moths under great pressure, causing their populations to decline. In Minnesota, of the 19 butterfly and moth species listed as endangered, threatened or of special concern, nine are dependent on native prairie grassland and two are suspected of being prairie dependent.

However, the benefits of choosing native grass species over more exotic grasses (not native to North America) go well beyond providing a food source for butterfly and moth species. Native grasses need little maintenance or input in the way of fertiliser or pesticides, and if they are planted at suitable sites, they rarely need to be watered once established. They do well in tough sites where other plants may not be able to survive, and have deep, fibrous root systems that stabilise the soil, reducing erosion.

These properties make native grasses an ideal landscaping plant. The challenge for Dr Mary Meyer and her colleagues at the University of Minnesota has been to make consumers aware of these benefits, and to work with retailers to ensure that the grass varieties they sell are best suited to the local area, and for the native moth and butterfly species that depend on them. 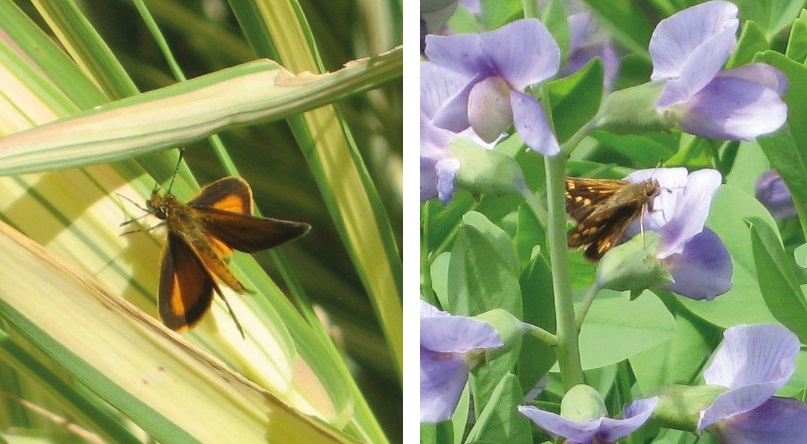 Butterflies and moths make up the order of insects called Lepidoptera. Lepidoptera go through a complete metamorphosis from larva to adult during their life cycle. Larvae or caterpillars feed on plants, sometimes specialising on a certain plant species or group of plants, which they also use for shelter. Native grasses provide larval food while native forbs or wildflowers provide nectar for the adult butterflies.

In their research into prairie Lepidoptera, Dr Meyer and Diane Narem found 36 species that used 17 prairie grasses as host plants, with most species using just three native grasses: big and little bluestem, and switch grass. Their findings illustrate just how specialised these butterflies and moths are. Dr Meyer suspects that there are likely to be even more moth species that use these grasses as host plants than she had identified, as moths tend to be much less well documented than butterflies.

This specificity of Lepidoptera is often true of herbivorous insects, and it means that native plant species that co-evolved with native butterfly and moth species are dependent on each other. Often, this relationship does not apply to exotic plant species. Studies in agricultural and urban landscapes have shown that patches with greater richness of native species have higher richness and abundance of butterflies and butterfly and moth larvae.

As well as the many benefits that native grasses provide for butterfly and moth species, Lepidoptera supported by native grasses are a key part of the ecosystem in themselves. They are an important food source for other insects, rodents, bats, birds (particularly young birds) and spiders, and they also act as pollinators.

To help identify the best performing native grasses across states and regions, Dr Meyer and her team led multi-state field trials between 2012 and 2015, in which they evaluated a total of 22 native grass varieties.

They found wide variation in plant size and form among locations for the 22 varieties in their trial, and only a few varieties performed consistently across multiple locations. This demonstrates the importance of regional trials to determine which plants will perform best locally, based on the local environment and conditions.

The results from these trials enabled Dr Meyer and her team to progress the next stage of their project: to inform growers, retailers and consumers in Minnesota and in other regions in the US of the best native grass varieties to buy, stock and grow. 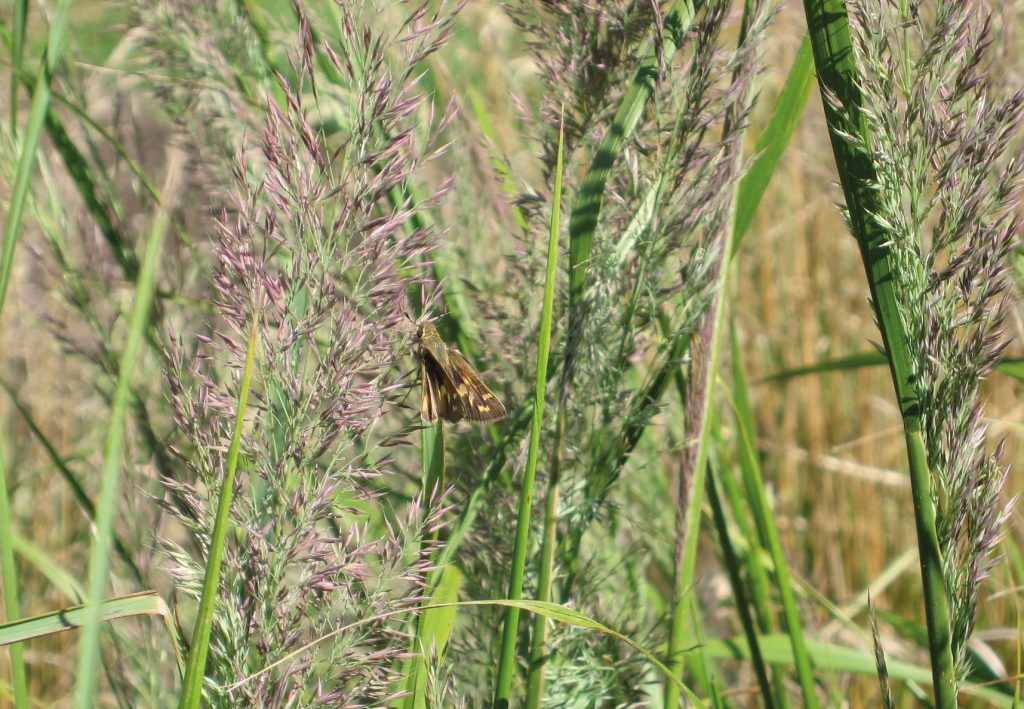 The team then produced a range of marketing materials to display in the garden centres participating in the project, including posters, brochures, and plant tags or labels. A comprehensive e-book guide to native grasses, a shorter quick guide and website were also developed. These resources showcase the different native grasses, and demonstrate how best to pair native grasses and herbaceous flowering plants together to benefit native butterflies and moths. In June 2019, Dr Meyer and her research colleague Diane Narem received the Silver Medal of Achievement from Garden Communicators International for the free e-book Gardening with Native Grasses in Cold Climates that they produced.

The team has also enhanced the Grass Collection at the Minnesota Landscape Arboretum, where Dr Meyer is based, providing information on the hardiness and landscape use of grasses for all landscapes. The display also compares over 200 grass varieties and trials new ones – providing a resource for public and industry education, and encouraging the use of native grasses in urban landscapes. In 2012, the Grass Collection became part of the Plant Collections Network, a benchmark for excellence in plant collections managed by the American Public Garden Association.

As part of the outreach and education for the Collection, a range of presentations are given to growers, Master Gardeners and the general public at state and regional gatherings, and open house events at the Landscape Arboretum. Research results are presented at national and regional conferences, as well as a series of webinars, all of which are available on the Promoting Native Grasses website. 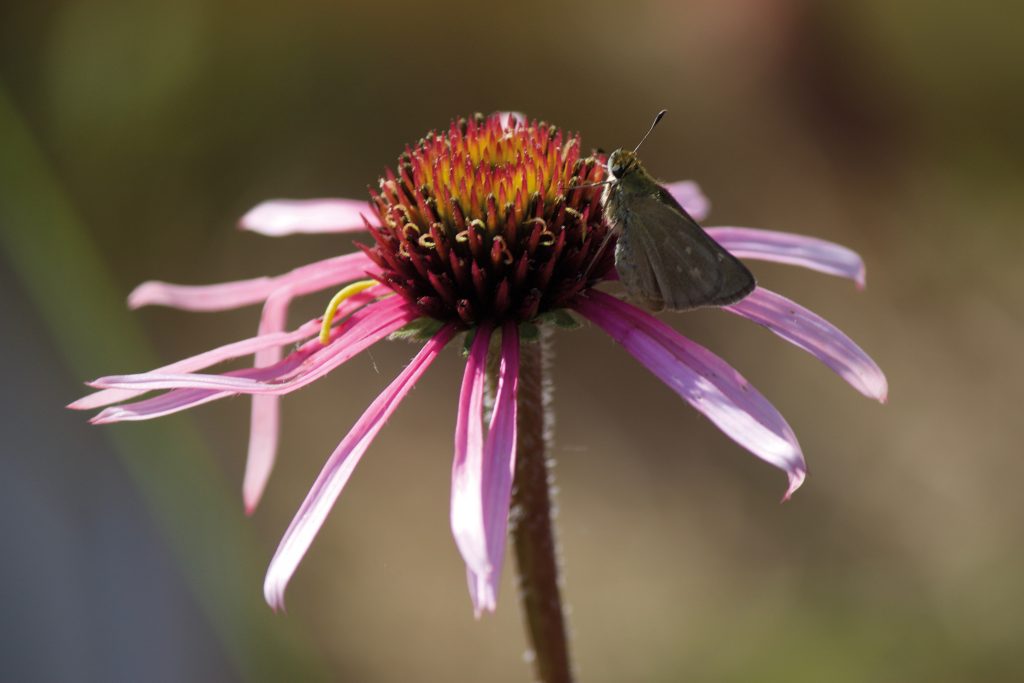 One of the main aims of the team’s collaboration with local garden centres was to increase commercial production and sales of grasses, and the project certainly seems to have achieved this goal. In fact, participating garden centres have reported increased sales of native grasses of up to 57%. Dr Meyer and her colleagues also surveyed more than 200 customers to determine the effectiveness of their displays. They found that grasses being low maintenance and beneficial to butterflies and moths were the most important factors to gardeners when making their buying decisions. This team is now using this insight to inform the subsequent phases of the project.

The research carried out by Dr Meyer and her team has increased awareness of the larval stage of butterflies and moths – enabling horticulturalists, ecologists, landscape planners, land managers and home owners to make informed choices in their decisions to buy and plant native grass species. These choices should provide them with grass varieties that perform better and are more resilient to local conditions, as well as providing an important habitat for declining prairie-dependent Lepidoptera species.

Dr Meyer and her team continue to evaluate the performance of diverse populations of native grasses as well as new varieties. As a result of their ongoing work, two Indian grass varieties have shown superior performance at four locations across Minnesota and are scheduled to be introduced into the nursery trade in the near future.

The practical applications of the team’s efforts potentially go well beyond the benefits already demonstrated through their work with garden centres and home owners. The soil stabilisation properties of native grasses, with their deep root systems, also mean that they can act as absorption and filtration systems for water run-off, slowing down water flow and catching impurities and pollutants before they enter groundwater. For this reason, native grasses are useful plants for buffer strips located along the edge of crop fields, or paved parking areas. Native grasses also provide habitat for other beneficial insects, such as ground beetles, which prey on many agricultural pests. Native grasses have long been used in ‘beetle banks’ in agricultural schemes in the UK as a form of biological pest control, but these have not yet been used to any great degree in the US.

The future conservation of native grasses and the species that depend on them relies not just on re-establishing lost natural prairie habitat, but also on ensuring that the ecological benefits of landscapes that replace their native habitats are fully realised. Dr Meyer’s team has been key in ensuring that the benefits that native grasses can bring to human-made environments are fully recognised by decision makers. The researchers hope to continue building on these encouraging outcomes with further work and research projects on native grasses. 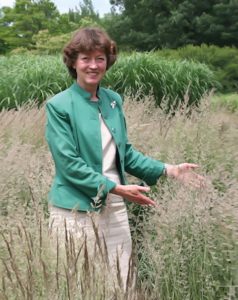 Dr Mary Meyer achieved her PhD in Plant Breeding and Genetics from the University of Minnesota in 1993. Here, she is now Professor of Horticultural Science and Director of Graduate Studies for the Masters of Professional Studies in Horticulture. In addition to her extensive research into native grasses, including leading the National Grass Trials Program in 2012, she also established the public landscape and research collection of ornamental and native grasses and sedges in 1987 at the University of Minnesota’s Landscape Arboretum. In addition to her research interests, Dr Meyer is responsible for the development and coordination of state-wide multimedia educational programs in environmental and consumer horticulture, and is a leading member of the Seed Your Future initiative, to promote horticultural careers and reduce plant blindness.