Yams provide a staple food source in Puerto Rico, supplying an essential source of nutrients and fibre. However, pests and disease have been severely diminishing local yields. To tackle this problem, Dr Merari Feliciano-Rivera and her team at the University of Puerto Rico are working to characterise the causal agents, provide management techniques and improve seed production practices towards sustainable yam production.

In the 80s, yam was considered the most important root crop in Puerto Rico and was highly profitable for farmers. Since then, the industry has been declining due to several factors, including foliar and tuber diseases, cheap imports, natural disasters and high production costs. Yam production decreased by two and a half times over just a thirty-year period.

Yams are considered a staple food in tropical and subtropical regions, following only potatoes and cassava as the most important starchy root crop worldwide. They provide a rich source of vitamin C, potassium, manganese and fibre and are low in cholesterol. In Puerto Rico, the most cultivated yams species include Dioscorea alata and Dioscorea rotundata.

Yam seeds are scarce and expensive, especially when sourcing a good quality crop. The plant is also affected by many pests and diseases, including soil pests such as white worm and nematodes – the main drivers of yam decimation in Puerto Rico. No nematicides are registered for use on tubers; dry rot takes over, severely diminishing harvests. Nematodes belonging to the Pratylenchus and Scutellonema families are the main causal agents in Puerto Rico.

Dioscorea rotundata is particularly susceptible to internal dry rot, which causes its tubers to harden, dry out and decay during storage, allowing subsequent invasion by a plethora of fungal species. Internal dry rot differs from dry rot in that it is caused by fungi rather than nematodes, and affects yams during storage, rather than both in the field and through storage. This disease has direct impacts on seed quality and causes yield losses of up to 98%. Across the globe, internal dry rot has been reported to be caused by infestations of Penicillium, Fusarium and Rhizoctonia fungi.

To determine preventative measures, identifying the most dominant local effector is vital. The application of fungicides before storage and planting has previously been proven to improve yam quality. ‘Oxamyl L’ used to be the go-to dry rot diminisher, however, this product is no longer registered for use on tubers in Puerto Rico, and is currently only registered for foliar application. 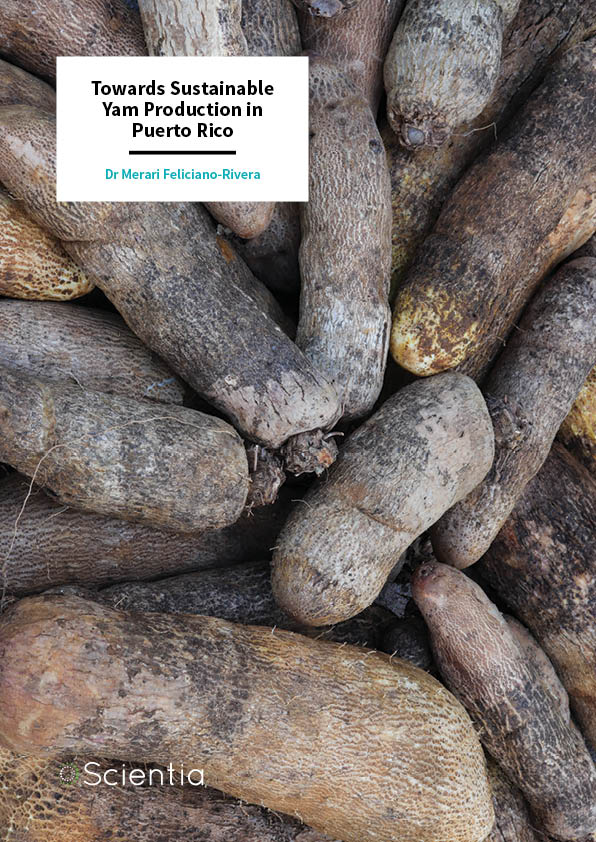 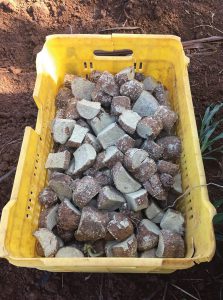 Both popular yam species are also prone to a disease called yam anthracnose, and yield losses of up to 90% have been observed as a result of this fungal infection in Dioscorea alata yams. Anthracnose causes black lesions on yam foliage, resulting in the premature loss of leafy material. As the plant depends on its chlorophyll-containing foliage to provide energy for growth, leaf loss has a serious impact on the size of the resultant tubers. Globally, anthracnose is caused by the Colletotrichum gloesporioides fungus; however, the species occurring in Puerto Rico was, until recently, unknown.

As anthracnose spreads, traditional agricultural techniques, including intercropping and field rotation, have had minimal impacts. As anthracnose spores are often blown from distant fields, it is near impossible to quarantine the crop from the cause. In the case of dry rot, although these agricultural techniques have been advised and are appropriate in theory, certain factors again make mitigation a challenge. The small scale of many Puerto Rican plots, which leads to diseased and healthy fields being in close proximity, means that such disease control precautions are often inadequate.

While Puerto Rican farmers despair at their diminishing produce, Dr Merari Feliciano-Rivera and her colleagues at the University of Puerto Rico are working to reverse the trend. ‘Our research focus is to reduce postharvest losses and improve product quality,’ Dr Feliciano-Rivera states. ‘We also aim to develop effective management tools and accurate strategies for diseases, identify and describe the causal agents using molecular tools, and evaluate propagation techniques to increase seed production.’ Although this may seem ambitious, Dr Feliciano-Rivera and her colleagues have undergone serious endeavours to provide farmers with new techniques of yielding yam. 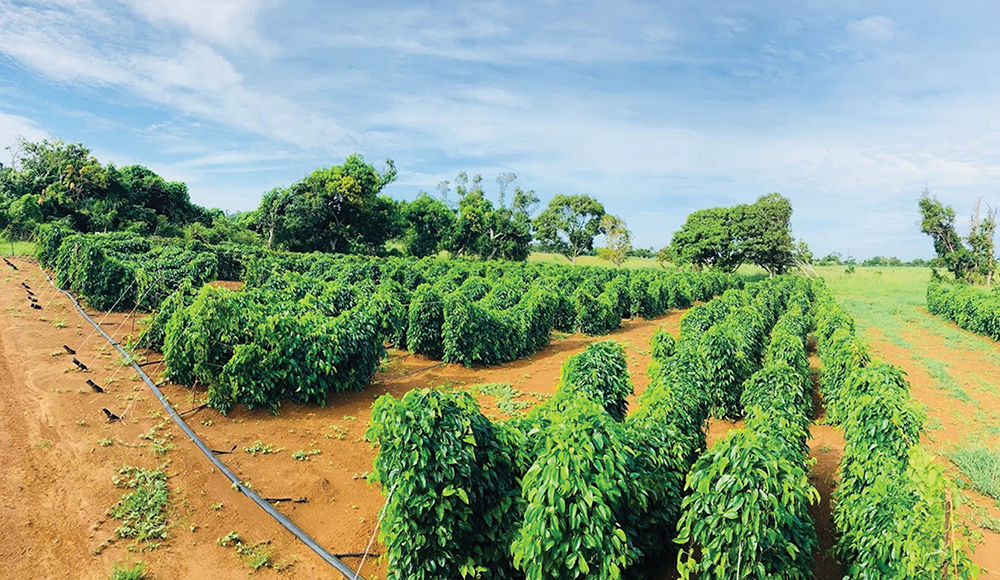 Once identified, Dr Feliciano-Rivera and her colleagues aimed to test the effectiveness of different pesticides to control internal dry rot disease. The team first dipped cut diseased tubers into one of a variety of pesticides. They applied each individual treatment four times to 25 tubers, assessing each yam at 15-day intervals throughout storage. After cutting tubers into seed-pieces and re-applying the same set of treatments, the team planted the treated yam seeds in the field, and conducted monthly assessments for signs of disease. They also analysed the soils in which each tuber grew and measured tuber weight to determine yield.

Further work by Dr Feliciano-Rivera and her colleagues has involved assessing yam spacing in agricultural fields and applying a method known as the ‘minisett technique’ to improve seed production.

Before planting, the team treats these minisetts with pesticides to prevent diseases. They then plant the pieces in small nursery beds for one month, before transplanting them into the field for further evaluations. In their current fields trials, Dr Feliciano-Rivera and her team are evaluating the combination of three sizes and three planting distances. This method provides more rapid in-field crop establishment. It also means that fewer tubers are required for seeding, allowing more to be sold or consumed, and reducing overall costs.

The researchers also aimed to identify whether nematicide treatments could reduce dry rot. They used untreated tubers as a control, and treated others with different combinations of pesticides: Vydate L®, Sesamin EC® and Nemakill®. The application methods were varied: through irrigation, and direct foliar application.

Dr Feliciano-Rivera’s team assessed nematode populations in the soil and tubers three times throughout the crop cycle and determined that none of their proposed treatments were effective in controlling the Pratylenchus coffeae nematode, highlighting the urgency for further research into an effective dry rot treatment.

Dr Feliciano-Rivera and her team did not stop at dry rot – they extended their efforts to understand and reduce yam anthracnose. To determine just how detrimental the disease had been throughout Puerto Rico, and to characterise the causal species of Colletotrichum fungus locally, the team collected 224 fungal samples from infected yam crops located around the island.

They examined the different fungal species and their disease-causing potential and found that Colletotrichum gloesporioides comprises one of nine species that appear on Dioscorea alata yams, with a further five presenting otherwise unreported local pathogenic strains. The researchers confirmed that Colletotrichum fungus found on both Dioscorea alata and Dioscorea rotundata yams is pathogenic and causes anthracnose in both cases. Of the entire island, they found that the town of Barranquitas experienced the most significant impacts, reporting 60% disease severity here.

Dr Feliciano-Rivera’s team then went on to assess a range of organic and conventional fungicides, to determine whether any could effectively control anthracnose. Dr Feliciano-Rivera and her graduate student Yara Rosada performed in vitro and in vivo tests, to find promising fungicides for managing foliar diseases of yam including anthracnose. They assessed the state of foliage for the absence of anthracnose-induced lesions and scars. Their findings suggest that plant-based extracts have no positive effect reducing yam anthracnose. A fungicide composed of Cyprodinil and Fludioxonil was the most effective fungicide for managing anthracnose in the field and producing the highest yields. This agreed with the team’s in vitro analysis, where this fungicide was one of three treatments identified to inhibit Calletotrichum growth. 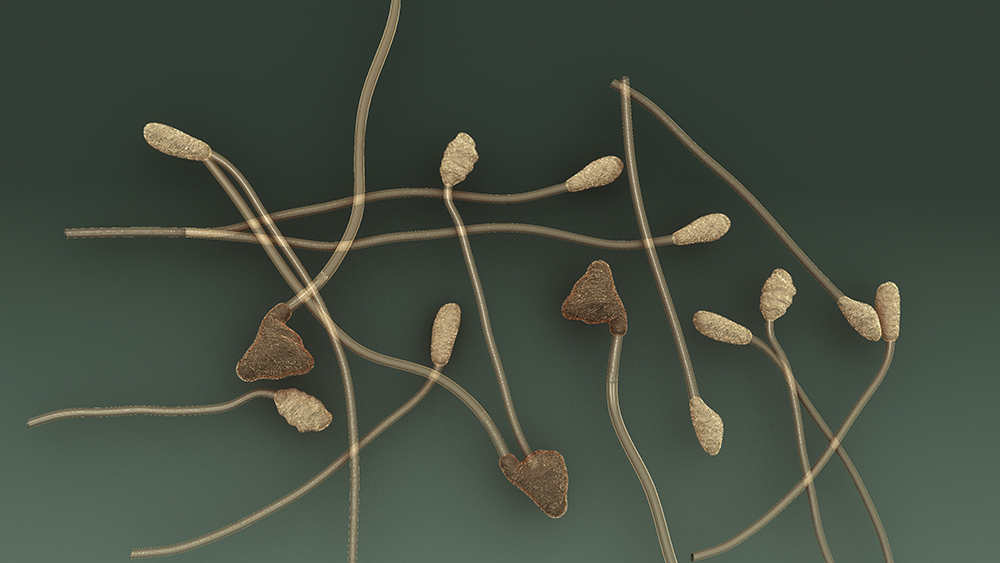 Dr Feliciano-Rivera’s research has come a long way to better yield the yam, but more is in the pipeline. The researchers aim to improve yam propagation rates, ‘to maximise the production of disease-free propagation material for the farmers’, using Temporary Immersion Bioreactor technologies.

Tissue culture is a common method used to produce multiple discrete plantlets from a single parent plant, through growth of parent tissue on nutrient media. Conventional methods are limited due to high labour requirements, low multiplication rates and long multiplication periods. Through the use of liquid media flowing between separate tissue-containing vessels, in which the gaseous exchange, nutrient uptake and illumination are controlled by an automated system, the ‘Temporary Immersion Bioreactor’ method avoids these drawbacks. This system therefore provides an affordable, speedy means of achieving higher quality plantlet production.

The team’s next steps also involve developing an integrated pest management program and production guide to provide users with an easily understandable overview of the results of their research. The guide is anticipated to be split into two sections of recommendations: general production, followed by disease control. The information itself will be targeted at Puerto Rican farmers, with specific recommendations for the area.

The researchers also plan to, ‘complete the third year of field evaluation of the minisett techniques to increase the production of yam seed’. Progress has so far been positive, providing a more certain future for yam farmers in Puerto Rico. 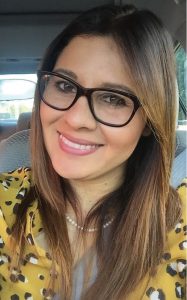 After completing her BSc in Agricultural Education at the University of Puerto Rico, Dr Merari Feliciano-Rivera extended her term here, completing her MSc in Crop Protection in 2007, followed by a PhD in Plant Pathology in 2011. Upon completing her PhD, Dr Feliciano-Rivera was then appointed the role of Assistant Professor at the University of Puerto Rico, Mayagüez Campus. Here, she was promoted to her current role as Associate Professor in 2015. For her outstanding research in plant pathology, Dr Feliciano-Rivera has received a number of honours, awards, achievements and several USDA funded grants. She has acted as a reviewer of scientific journals, been invited to speak at numerous conferences and seminars, and produced an extensive list of published papers. As well as undertaking research, she advises a number of graduate and undergraduate students, and teaches several graduate courses, including Advanced Plant Pathology, Research Methods in Plant Pathology and Disease Epidemiology.