Pasture-raised chicken is viewed as a more ethical option compared to that reared in overcrowded barns. However, pasture-raised birds are more likely to come in contact with bacterial pathogens that can be dangerous to consumers. Dr Michael Rothrock and his colleagues, at the Egg Safety and Quality Research Unit of the United States Department of Agriculture – Agricultural Research Service, investigate how environmental factors can lead to the contamination of pasture-raised chicken with harmful bacteria. Through their research, the team hopes to find ways of ensuring the safety of this popular food.

Pasture-raised chicken meat is becoming increasingly popular, primarily due to a greater concern for animal welfare. Rather than being confined to overcrowded barns, pasture-raised chickens are allowed to roam on pastureland, where they are free to express their natural behaviours, such as scratching, foraging and dustbathing.

However, due to the fewer management controls of pasture-raised chickens – including exposure to wild birds and weather – there is a higher risk of birds contracting bacterial pathogens when compared to conventional farming systems. Pathogens such as Salmonella, Campylobacter, Listeria and E. coli are of great concern in the poultry farming industry, as they can remain in the meat and cause consumers to become extremely ill with food poisoning.

Symptoms of food poisoning vary widely, depending on the bacteria present, but can range from mild stomach problems, such as vomiting and cramps, to serious infections that lead to permanent neurological issues. The World Health Organisation estimates that 600 million people – about 1 in 10 people – suffer from food poisoning every year, with around 420,000 fatalities. Foodborne illnesses are particularly dangerous for children and elderly people.

Despite the enormity of this public heath issue, Dr Michael Rothrock of the United States Department of Agriculture noticed that studies investigating the impact of environmental factors on infection rates in pasture-raised poultry were scarce. Therefore, over a series of studies, his team explored how several factors, including weather, diet and management practices, can influence the susceptibility of pasture-raised chickens to become infected with a foodborne pathogen, such as Salmonella, Campylobacter, Listeria or E. coli.

Dr Rothrock explains that a thorough understanding of the factors leading to poultry meat contamination is essential to ensure the safety of these products when sold on the market. ‘Therefore, we have been focusing on the pastured poultry model of chicken farming, with a specific focus on changes throughout the farm to fork continuum and how it impacts food safety,’ he says. 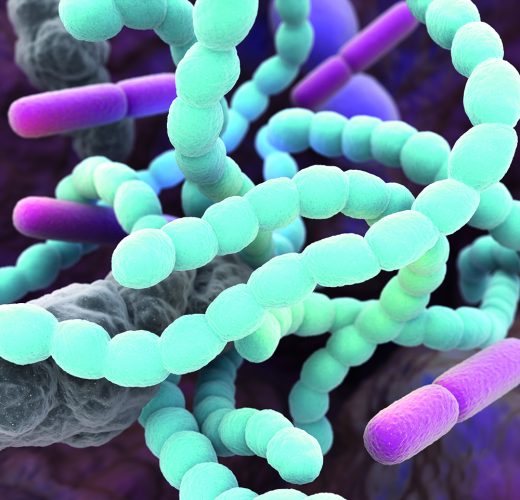 Dr Rothrock and his colleagues began by analysing antibiotic resistance in foodborne pathogens. To do this, they isolated Salmonella, Campylobacter, Listeria and E. coli from live animals and carcasses, from 15 flocks in six antibiotic-free, pasture-raised chicken farms.

Although no antibiotics were used on the farms, the researchers found that numerous animals carried bacteria that were resistant to three or more antibiotics, meeting the definition of multidrug resistant bacteria. The team found an extremely complex and dynamic antibiotic resistance pattern. Even within the same animal, bacterial profiles from different locations were very different.

Dr Rothrock explains that the main lesson from this study is the need to take this bacterial variation into account in future studies. ‘Although this is a limited study related to a specific alternative animal production system, the results demonstrate the necessity of including background resistance assessments in future studies,’ he states. 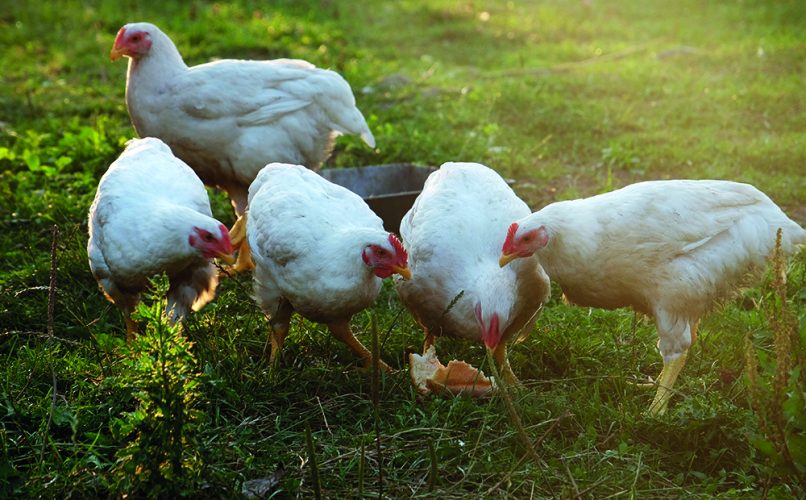 A second factor affecting foodborne pathogen prevalence on farms is the birds’ gut microbiomes – the communities of bacteria living within the intestines of the chickens. Just like in humans, the gut microbiome is known to affect many different functions in chickens, including nutrient utilisation, as well as resistance to infection.

To test the importance of this factor, Dr Rothrock and his team analysed fecal and soil samples collected from two farms raising the same breed of chicken with the same diet. Unsurprisingly, the same main groups of bacteria were found in all animals from both farms: Firmicutes, Proteobacteria, Actinobacteria and Bacteroidetes, which are all known to dominate the microbiomes of chickens.

Within these groups, however, the team found significant differences in certain bacteria between the farms, suggesting that even small differences in the birds’ environment were enough to create different microbiomes. ‘Although both farms in this study raised the same chicken breed fed the same diet, each pastured poultry farm possessed their own ecology that shapes the structure and composition of the poultry-related microbiomes,’ says Dr Rothrock.

When it came to foodborne pathogens, his team isolated Listeria in only a few animals, and Salmonella from a single sample. However, they discovered Campylobacter and E. coli in all samples, demonstrating the resilience of these bacterial pathogens in different environments.

Curiously, while there were signiﬁcant diﬀerences in the microbiomes between the farms from live birds and those that were recently slaughtered, the ﬁnal microbiomes (measured after storage) were more uniform between farms. This was rather unexpected, not only because the birds’ microbiomes had been different up to this point, but also because each farm used a different method of storing the carcasses: one of the farms stored carcasses at 4°C for one day; while the other stored them at −20°C for two weeks. Dr Rothrock expected that the difference in storage temperature (refrigeration versus freezing) would affect the bacteria that were present, but it did not.

This resilience to change at this stage led the research team to speculate about a core microbiome that cannot be changed regardless of the procedures used. However, further research is needed to explore this idea.

‘We have been focusing on the pastured poultry model of chicken farming, with a specific focus on changes throughout the farm to fork continuum and how it impacts food safety.’ 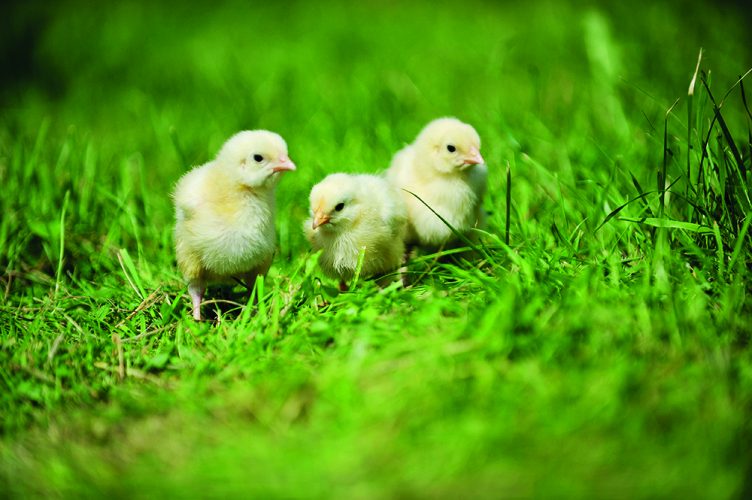 The Impact of Diet

A third factor that the team investigated is diet. In both conventional and pasture-raised farming systems, most poultry feeds use soybean as a main source of protein. There are certain compounds in soy that are believed to be beneficial for human health, but in recent years, soy-based products have become slightly controversial with many consumers. One of the reasons is an increase in allergy cases, while another is the unsustainable farming practices that are often used to grow soybean crops.

Therefore, many consumers are now demanding soy-free products, and this extends to chickens fed a soy-free diet. To test the merits of this approach, Dr Rothrock and his team designed an experiment to compare two different formulations: a traditional soy-based diet and a pea-based diet. Again, the researchers collected samples at several stages of the production chain, starting with the live birds all the way through to the processing and storage stages.

The team found that diet appeared to have a great influence on the microbiomes of the birds. Compared to chickens fed a soy-based diet, the researchers noticed reduced levels of the pathogen Campylobacter in birds fed the pea-based diet. Given that the use of antibiotics in human food production is increasingly frowned upon, controlling this dangerous pathogen through simple diet modification could represent an excellent strategy for ensuring food safety.

A possible explanation for this effect relates to the production of mucin in the intestinal tract of the birds. It turns out that pea-based diets do not promote the secretion of mucin as much as a soy-based diet, which is essential for the survival of this pathogen in the poultry gut.

‘Our data suggest that replacing soy with peas in the production of pasture-raised chickens is a viable strategy for producers,’ says Dr Rothrock. ‘Not only does such a dietary switch appeal to a niche of potential consumers, but it also can reduce the presence of important foodborne pathogens in the ﬁnal product presented to consumers.’ 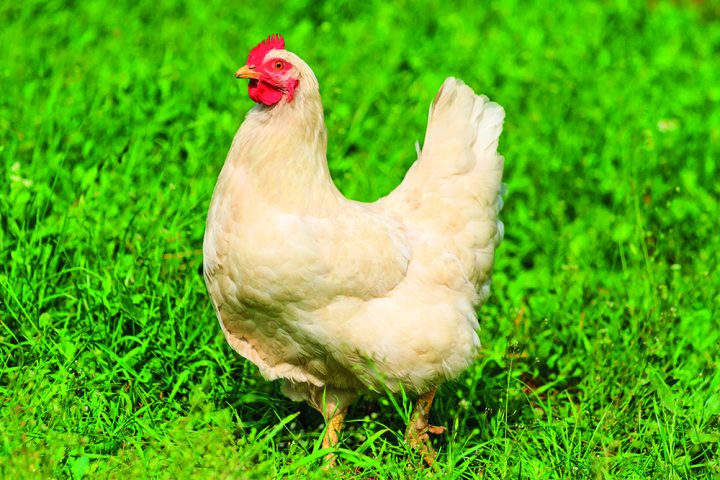 Finally, the team investigated the influence of weather on the prevalence of dangerous foodborne pathogens. Although pasture-raised chickens are exposed to the elements on a daily basis, there have been very few studies exploring how variables such as temperature and wind affect levels of pathogens in these birds.

To address this shortfall, Dr Rothrock and his team decided to compare how certain meteorological conditions related to levels of Listeria in soil and fecal samples in pasture-raised chicken farms. Out of a long list of variables, the team found that humidity, temperature and wind were most strongly related to levels of Listeria. The team found that even at temperatures as low as 1–2°C, it was still possible to find this pathogen.

As pasture-raised chicken meat continues to increase in popularity, there is a need to develop new management approaches to reduce serious illness and mortality associated with foodborne pathogens. Understanding the factors that affect levels of these pathogens – such as diet and weather – is the first step on this journey. 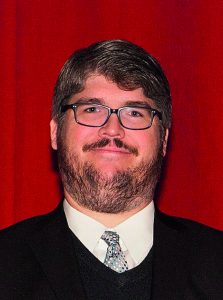 Dr Michael Rothrock completed his PhD at Arizona State University in 2005, followed by two positions as a research associate at the United States Department of Agriculture (USDA). Since 2014, he has been working as a microbiologist at the Egg Safety and Quality Research Unit, located at the US National Poultry Research Center (USNPRC) in Athens, Georgia. Dr Rothrock’s main objective relates to food safety in pasture-raised poultry systems. In his varied research projects, Dr Rothrock works collaboratively to tackle complex research questions, working closely with engineers, poultry scientists, infectious disease microbiologists, chemists, and various specialists within the biological sciences. He believes that using both traditional and new molecular tools is the best approach to understand the ecological role of bacterial pathogens within poultry production systems.

JM Lourenco, MJ Rothrock, YM Sanad, TR Callaway, The effects of feeding a soybean-based or soy-free diet on the gut microbiome of pasture-raised chickens throughout their lifecycle, 2019, Frontiers in Sustainable Food Systems, 3, 36.