People don’t often think about mud, but this valuable sediment can record history, especially when deposited in lakes. The study of such lake sediment is known as palaeolimnology – analysing the physical, chemical and biological information preserved in sediments to reconstruct the history of lakes and their surroundings. Dr Nathalie Dubois and her team at the Swiss Federal Institute of Technology (ETHZ) and the Swiss Federal Institute of Aquatic Science and Technology (Eawag), are pioneering approaches that use fossil molecules (biomarkers) found in lake sediment to understand historical events and search for traces of early human impacts.

Humans Modify Their Environments Through Time

Humans are the only animal species that modify their surroundings on a large scale, leaving markers in the sedimentary record that can be analysed by scientists today. Changes to the landscape are closely related to human history, and Dr Nathalie Dubois and her multidisciplinary team of geologists, chemists, sedimentologists and ecologists seek novel methods to extract these clues.

As humans cut down trees and cultivate the land, nutrients, such as phosphorus or nitrogen, and biochemical markers, such as plant lipids, are released into watersheds (rivers and lakes), modifying the aquatic environment. Understanding how humans change their environments and how these effects have varied over time is of particular relevance in the present day, especially if we are to understand the long-term impacts of human-induced climate change on our surroundings.

Dr Dubois and her PhD student Mischa Haas explored one local example in a recent study. More than 2,000 years ago, when the Romans built the city of Aventicum, the largest city in Switzerland at the time, they began to extensively deforest the region to establish farmland. By analysing a 10-metre sediment core from Lake Murten downstream of the ancient city, the research team was able to show that human activity drastically impacted the lake until the Romans abandoned this city at the end of the 3rd Century AD. 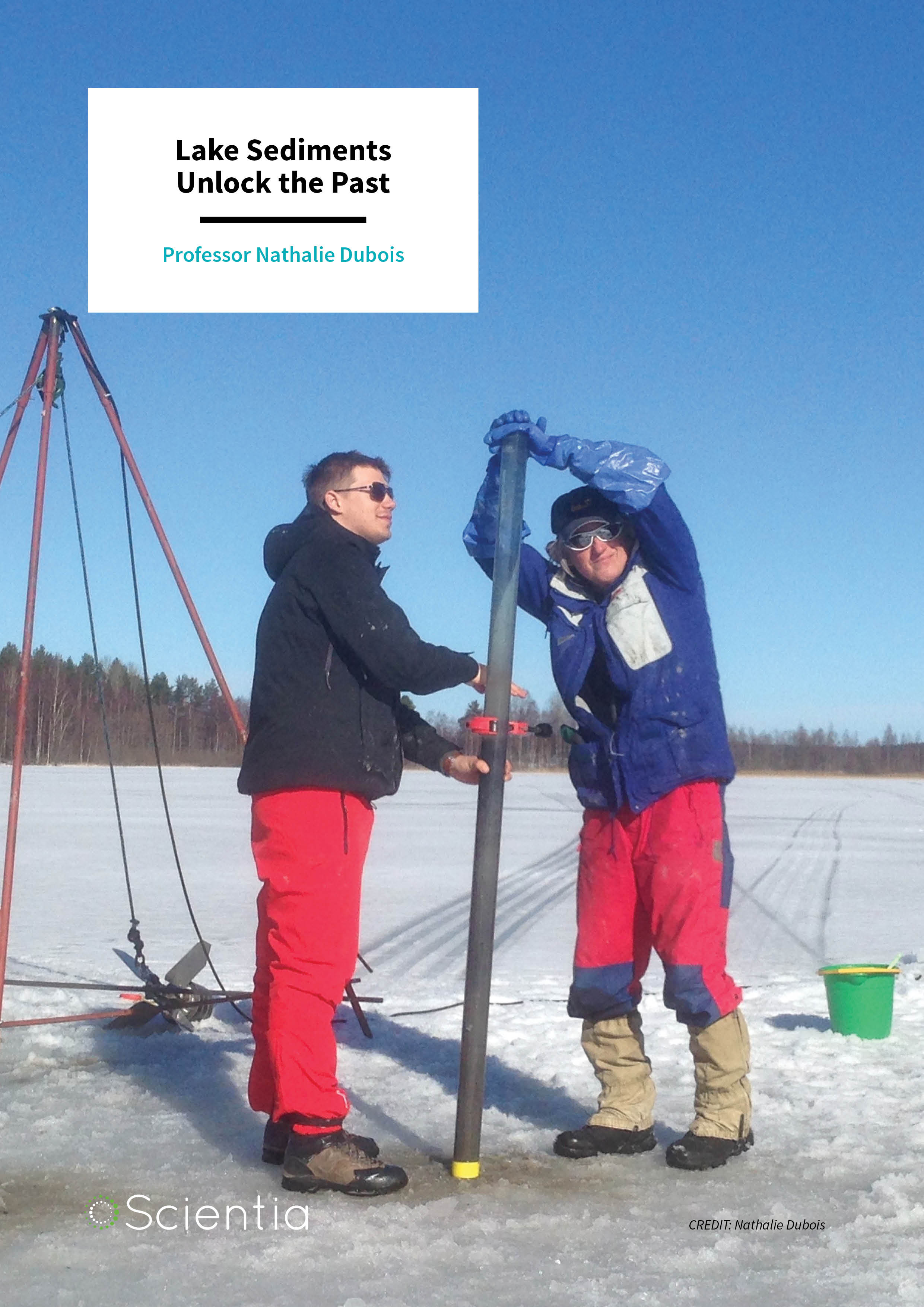 This information was revealed by the amount of soil material suddenly deposited in the sediment, among other things. The team showed that the Romans caused extensive changes to the sedimentary record over a period of more than 300 years. During this time, the bottom of the lake became anoxic – meaning that it was almost entirely devoid of oxygen – leading to the death of many bottom-dwelling creatures. Subsequently, the environment took another 300 years to recover – a result that resonates today. How long will it take our planet to recover, if ever given the chance, from the dramatic changes induced by humans over the past few hundred years? 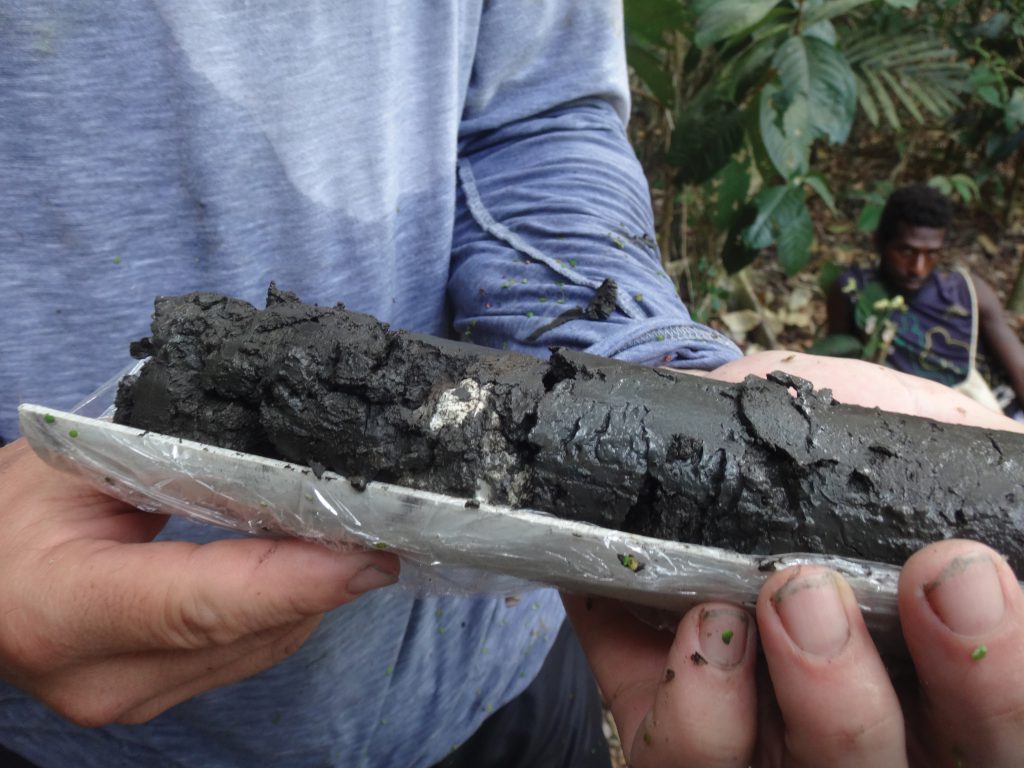 Reconstructing the History of Farming

One key research area for Dr Dubois and her team involves reconstructing the history of farming. In particular, they are interested in finding out how farming destabilised soils over time as farming techniques evolved. This sedentary mode of life evolved relatively late in human history, and impacts have tended to vary depending on the region and type of farming. Soil erosion due to humans is of particular concern, especially today, as evidenced by recent action plans put in place by many national governments.

In Europe, initial human activities within an area tend to be marked by the appearance of cereal crops alongside reductions in pollen from local trees. The use of fire to clear the landscape is often indicated by increased charcoal abundance in sediment cores. Animal grazing, on the other hand, is associated with certain kinds of fungi that grow on animal dung. 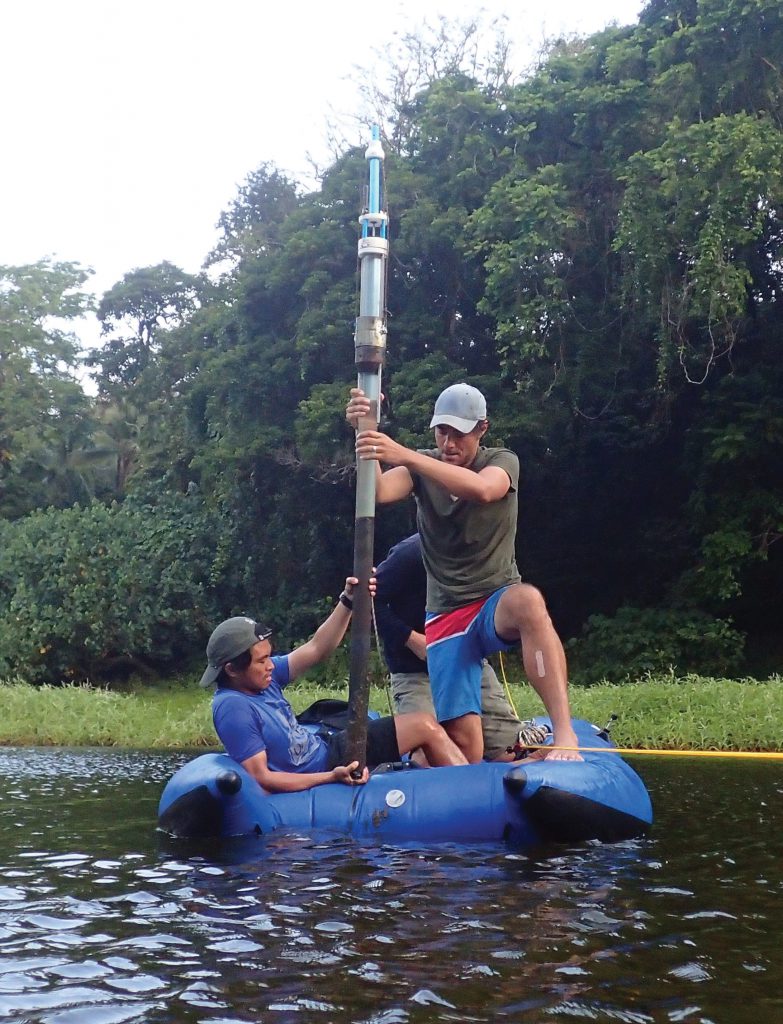 In one recent project, Dr Dubois and Haas explored the unconventional transition from ploughing to grazing in Russian Karelia. This return to pastures and low-intensity land use occurred when Karelia was politically transferred from Finland to the Soviet Union in the 1940s. The researchers investigated how this key regional political change is reflected in soil erosion over time. They used radiocarbon dating approaches to date different organic fractions within the sedimentary sequences of three lakes and tracked changes in erosion over time.

By radiocarbon dating different sediment fractions, the research team was also able to show that the soil was stable in this region prior to industrialisation. Soil erosion increased dramatically when intensive agricultural practices started as Karelia was part of Finland. Once ceded to the Soviet Union, biomarker distributions and soil erosion indicators show a short period of forest regrowth and soil stabilisation. Since the 1960s, as pastures came to dominate the region, soil erosion decreased to pre-Industrial values, but nutrient inputs started to rise.

This research shows that both soil erosion and stabilisation processes, linked to changes in agricultural practices, can be efficiently tracked using geochemical and sedimentological techniques. The innovative approaches used by Dr Dubois and her team opens the door to quantitatively evaluating human impacts on land use and ecosystems over time. 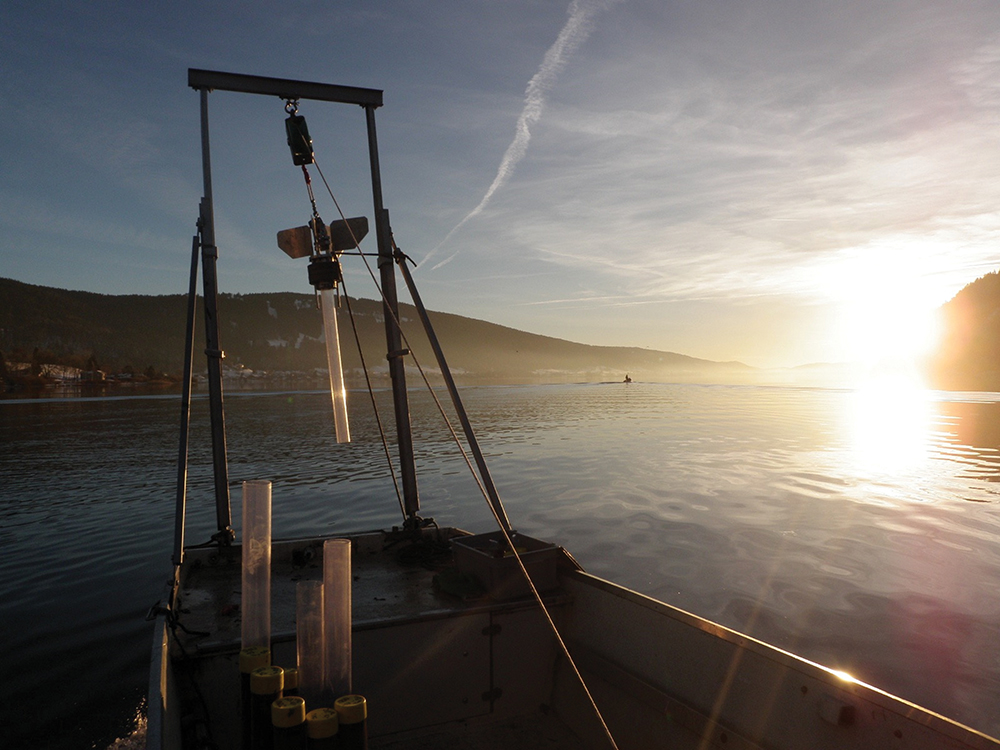 Migrations and Settlements: The Tropical Pacific

On a more global scale, Dr Dubois and her team also use their skills to address early human migration questions, including those surrounding the settlement of remote Pacific islands. These questions are important in terms of reconstructing human migrations around the world over time, but also because the arrival of people into pristine environments led to dramatic changes. The team uses traces left in lake and swamp sediments to reconstruct such changes. Perhaps more importantly, this knowledge can be applied to predict the likely future effects of human-induced environmental changes.

By pioneering new approaches based on sediment cores from a range of Pacific islands, the team has been able to utilise preserved lipid biomarkers to provide insights to a number of debated questions, including when food production first appeared in the Pacific archipelago of Vanuatu. In this project, the team extracted lipids from plants and used them to develop species-specific plant biomarkers to reconstruct vegetation and land-use changes. This approach has proved especially useful in cases where more traditional pollen analyses cannot be performed. In particular, the team was able to use their approach to assess the occurrence of culturally important crop plants, such as Taro (Colocasia esculenta), a tropical crop grown mainly for its edible corms.

Dr Dubois’s master’s student Christiane Krentscher and postdoctoral researcher Dr S. Nemiah Ladd analysed the lipid content of various plants from Vanuatu using chemical techniques including gas chromatography-mass spectrometry (GC-MS). This technique allowed them to identify a lipid that was unique to the Taro samples they had collected. This is important, because although this particular lipid has been found in other plants, none in this region of the Pacific are known to produce it in such quantities as Taro.

The identification of Taro in sediment archives from Vanuatu opens the door to determining the history of settlement and subsistence activities on this island with a much higher degree of accuracy than before. It will also help Dr Dubois and her PhD student Giorgia Camperio to clarify the complex interactions between humans and remote tropical environments across Oceania.

In another recent example of their innovative approach, Dr Dubois and her PhD student Ronald Lloren are addressing the greatly debated question of when the Maori people arrived in New Zealand. They are doing so by investigating faecal biomarkers (such as coprostanol), which are related to cholesterol and are found in human waste. This tactic, combined with the analysis of leaf wax data, allows the researchers to evaluate changes in vegetation cover and human presence. 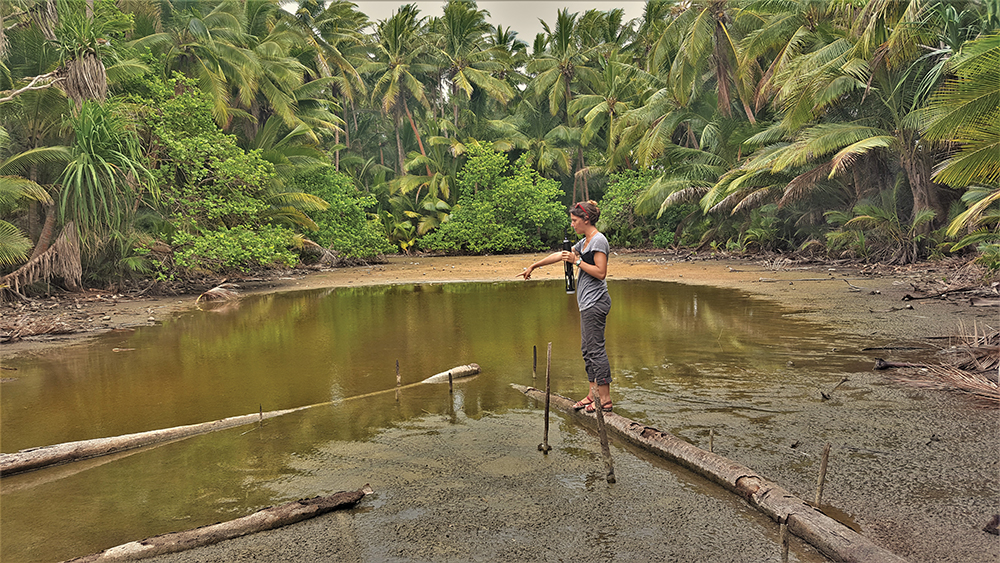 The usefulness and potential applications of the team’s research go way beyond reconstructing historical changes and human impacts. This field of palaeolimnology is key because it is becoming increasingly important to care about the impacts that humans have on their environment. This research can tell us more about how we are harming our planet, and for how long – so that we can start to minimise the damage we cause.

In future work, Dr Dubois and her PhD student Remo Roethlin plan to analyse the heavy metals present in lake sediments to trace and interpret the impacts of mining and industrial developments, including water contamination. This is important because the impacts of past heavy metal contamination on aquatic ecosystems remain poorly understood, especially whether this legacy is still influencing modern ecosystems. 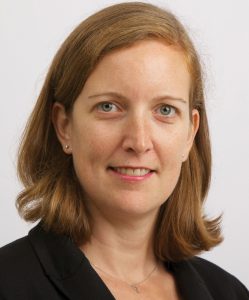 Dr Nathalie Dubois completed her PhD in Oceanography at Dalhousie University (Canada) in 2010. She then worked as a postdoctoral research associate at the University of Manchester (UK) before moving to Woods Hole Oceanographic Institution (United States). Dr Dubois then started her current position of Sedimentology Group Leader at the Swiss Federal Institute of Aquatic Science and Technology in 2013, before becoming an SNF Professor of Palaeolimnology at ETHZ in 2016. She is a member of the Swiss Geological Society, the Swiss Society for Quaternary Research, the American Geophysical Union, the International Paleolimnology Association and the International Association of Sedimentologists.