The CucCAP Project – Harnessing Genomics for Disease Resistance in Cucumbers, Melons and Squashes

Watermelons, cucumbers and squashes represent a vital source of food worldwide, and their industries are worth billions. However, these important crops are being held back by a number of serious diseases. Through genomic studies, Dr Rebecca Grumet of Michigan State University and her collaborators in the CucCAP project aim to bring disease-resistance to farmers, towards ensuring greater food sustainability into the future.

Watermelons for summer afternoons, cucumbers for salads, squash for autumn dinners and loofahs for your winter showers – all of these come from the widespread and rather important family of plants known as Cucurbitaceae, or ‘cucurbits’. The many different varieties of cucurbits have been part of our meals for millennia and have established themselves across most of the globe.

They remain extremely important as a source of food. In fact, cucurbits rank as one of the highest plant families for the number and proportion of species that are used as human food. The recent development of newer varieties (usually known as ‘cultivars’) such as white pumpkins and black watermelons has also brought cucurbits from their traditional role as a staple food into the lofty heights of trendiness.

Our long history of cucurbit cultivation comes with its own disadvantages, one being that cucurbit diseases have also had many thousands of years to develop. Many different diseases exist – caused by fungal infestations (Fusarium wilt, gummy stem blight, powdery mildew), microbes known as oomycetes (downy mildew, phytophthora rot) and even viruses. Those involved in the industry consistently identify these diseases as the biggest problem in bringing cucurbits to market. The problems are many – they cause severe reductions in yield and quality, require additional effort and expense to control the disease, affect the environment due to the increased need for pesticides, and may even lead to loss of an entire crop.

This is where the CucCAP project enters the picture. With many years of experience in the agricultural sciences, the CucCAP scientists are part of an ambitious program to prevent diseases of cucurbits by creating disease-resistant plants. ‘Disease-resistant cultivars are the most cost-effective and environmentally desirable solution to these problems,’ explains Dr Grumet, ‘but the success of new cultivars depends on a combination of yield and ease of production for the producer, and price and desirability for the consumer. Thus, breeding programs need to combine multiple disease resistances without sacrificing yield or quality.’

Dr Rebecca Grumet of Michigan State University serves as the lead for a collaboration known as the CucCAP program – an endeavour that combines scientists from a number of top research universities and the US Department of Agriculture (USDA), Agriculture Research Service. The CucCAP program, funded by the USDA’s National Institute of Food and Agriculture aims to help solve these problems by bringing applied genomics into the field of cucurbit disease resistance. This emerging field of applied genomics involves analysing and interpreting an organism’s complete set of genes (its genome).

The research team has three major ways to achieve this. First of all, the team aims to develop genomic tools for to allow accelerated selection of promising strains. They then hope to use these tools to develop new, disease-resistant cultivars. Thirdly, they aim to provide useful information to growers and processors to help prevent the spread of disease. 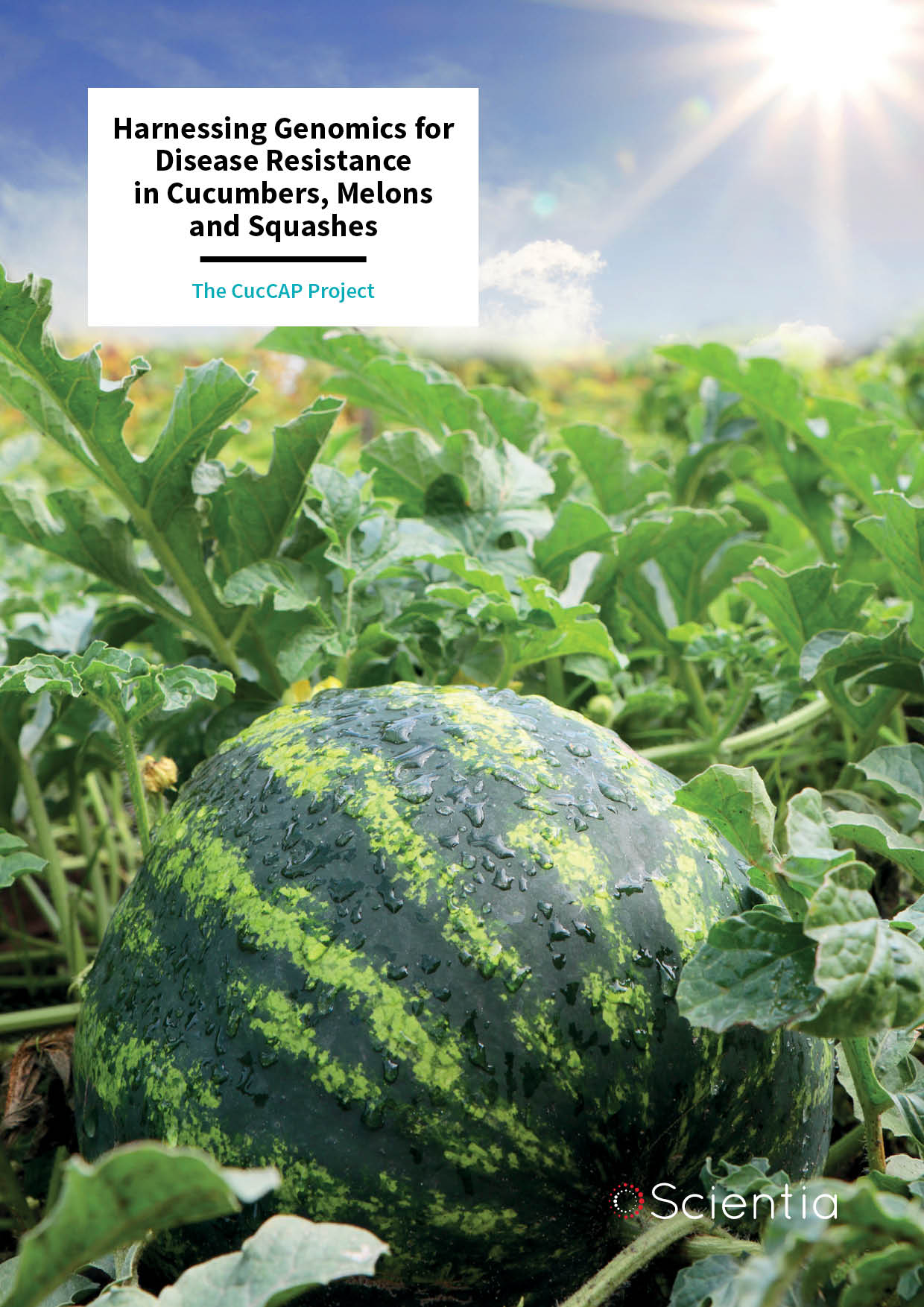 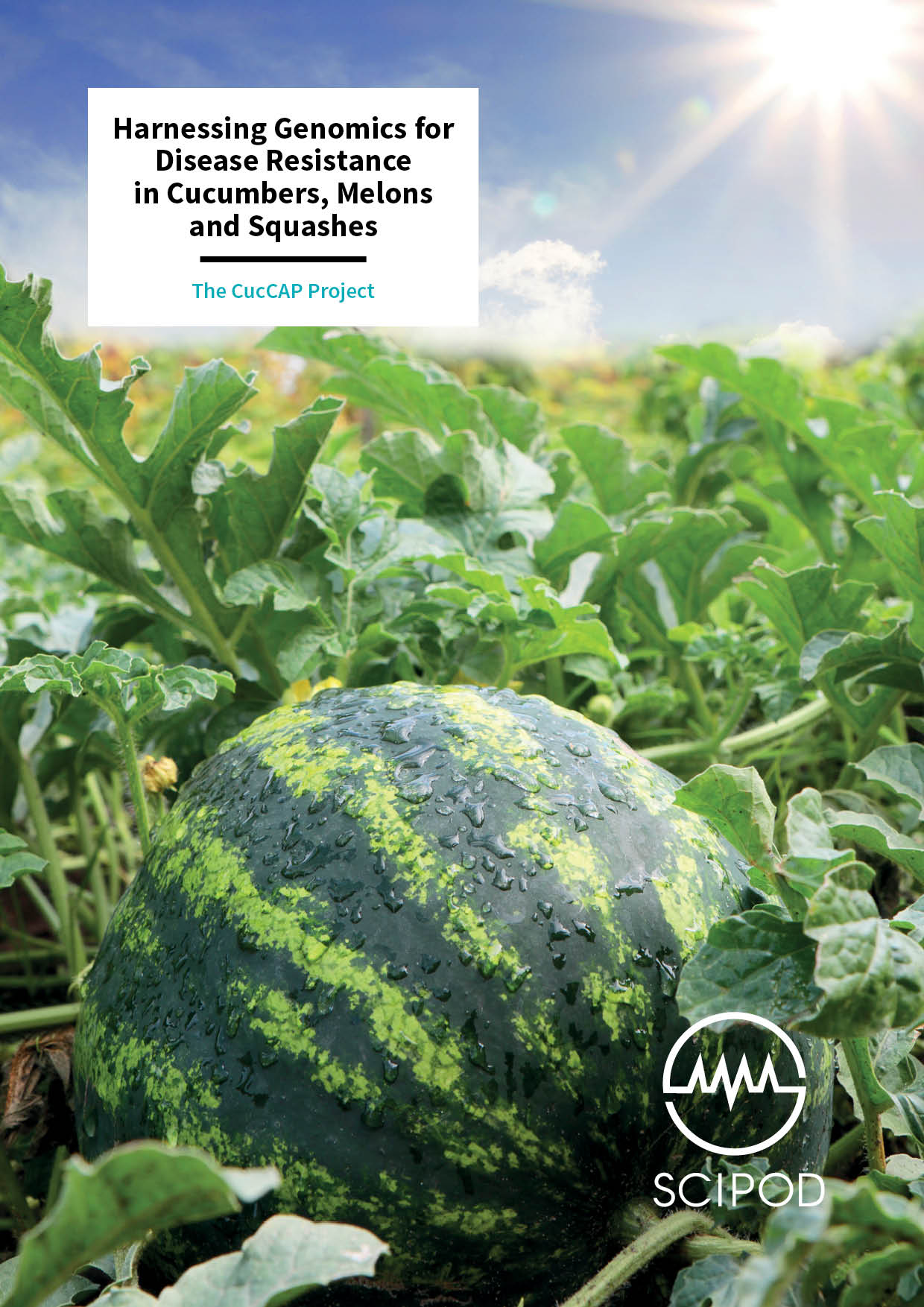 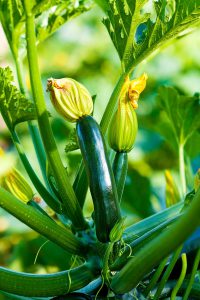 The program has a number of interested parties, Dr Grumet notes, including ‘growers, shippers and processors, who depend on high quality, disease resistant cultivars; the breeding community (seed companies and public breeders) who develop these cultivars; and the scientific community who develop knowledge and train the next generation of plant scientists and breeders.’

All of this work is based on the rapidly-decreasing costs of genomic sequencing and genetic analysis. Draft genomes have been put together for the four main cucurbit species – watermelon, cantaloupe, cucumber and squash. The CucCAP project has allowed for the development of a fully revamped and freely-accessible cucurbit genomics website (http://cucurbitgenomics.org/), so that scientists from around the world can utilise the data for their own purposes. In this case, the most valuable use for this data is to determine the locations of disease resistance traits in the genomes of different species.

Variety is the spice of life, and this holds true even in distinctly non-spicy plants such as watermelons. Access to a large number of different varieties allows plant breeders to bring new and exciting traits to their current crops, cross-breeding one with the other to find the ideal mix – for example, blending a disease-resistant trait with one that ensures large fruit.

These different varieties can be found in many places, but the most useful sources are collections of seeds and plant tissues that are curated by researchers or national organisations. Such collections are vital for plant breeders, as they provide an extensive resource containing many different plant traits, which can be used to develop improved yields or disease resistance.

An excellent example of this is the US National Plant Germplasm System, a collection of around 16000 different plant species spread across thousands of different genera. The collection includes more than 6000 different strains of cucumber, watermelon, melons and squash alone, all of which were available for genetic analysis by the CucCAP team. 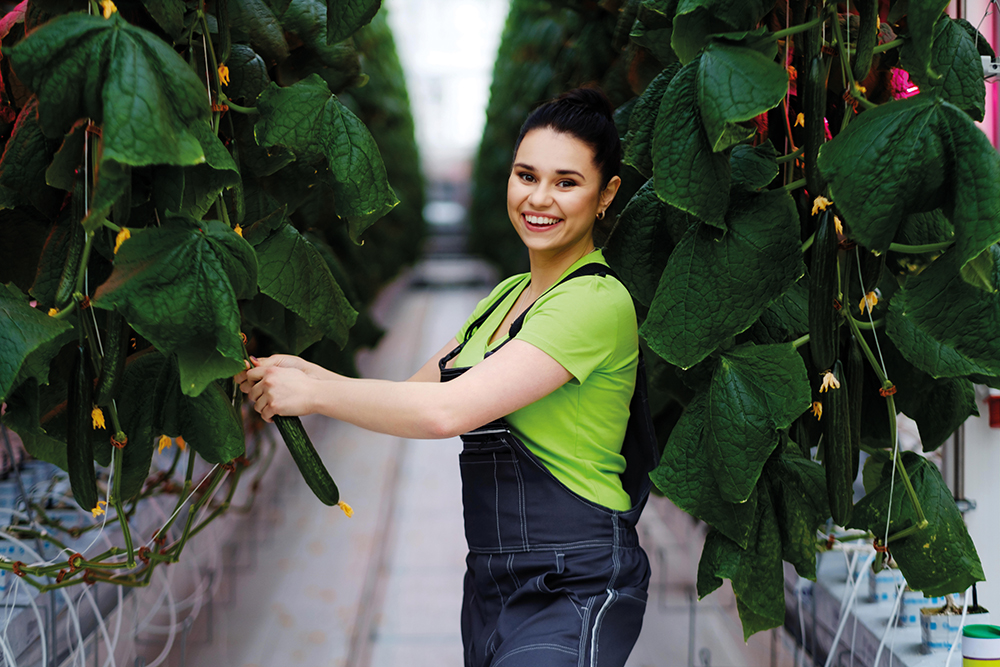 Genetic analysis provides detailed information on the type and degree of variation present in the many different plants of the collection. As plants are bred, adapted and modified, their genomes slowly drift in different directions, often with widely differing results. This natural drift can be traced by comparing how similar different genomes are to one another, essentially creating a very complex ‘family tree’ of the species. A good example of this comes from initial work by the CucCAP group on cucumbers. The US repository had an impressive 1234 different genetic sequences in the collection, sourced from sites across the globe.

Cucumbers were initially domesticated in India and Southeast Asia. From there, they spread both east and west through trade and migration, and distinctly regional traits were developed. The CucCAP team was able to see this when examining the genetic relationship of the various samples – a highly diverse family of strains were present in India and Southeast Asia, consistent with their role as the origin-point of the species. Two other major groupings, or ‘clades’, could be identified, one from East Asia, and one comprising West Asia, Europe, Africa and North America. This clearly demonstrated that the ‘ancestral cucumber’ had diverged into distinct strains based on geography, with limited opportunity to mix with the other groups.

Interestingly, the CucCAP researchers noticed that this geographical divergence was even more apparent when looking within the larger groups. The Indian clade was divided into subgroups which reflected geography, while Japanese and South Korean cucumbers were genetically distinct from their Chinese counterparts. Geography was not the only factor behind these differences, naturally, as human selection also had a role to play. The researchers were able to show that breeding of North American varieties resulted in two major subgroups – one intended for pickling and the other intended to be eaten fresh.

How can this information be used to improve the plants themselves? As with cucumbers, the cucurbit family is affected by a number of different diseases – from fungus to bacteria to viruses. Many of these have been identified by the industry as high priority problems – ones that affect incomes and livelihoods. Traditional plant breeding has long attempted to find disease-resistant strains, but this is quite challenging, as the desired trait needs to be introduced without bringing in any unwanted attributes, and the breeder then needs to check a large number of plants to determine which of those have successfully taken up the new ability. This makes genomics a valuable tool, one that helps farmers and breeders to identify promising strains in a quicker, more efficient manner.

Researchers of the CucCAP group take the genomic knowledge that has been developed and use this to identify markers of disease resistance. These markers take the form of particular genetic sequences found in association with traits of value. By identifying these markers within disease-resistant plants, it is possible to track the inheritance of a disease-resistant trait throughout the breeding program. This allows researchers to quickly identify their ‘ideal’ plants and discard the unwanted ones, accelerating the development of new, hardier strains. 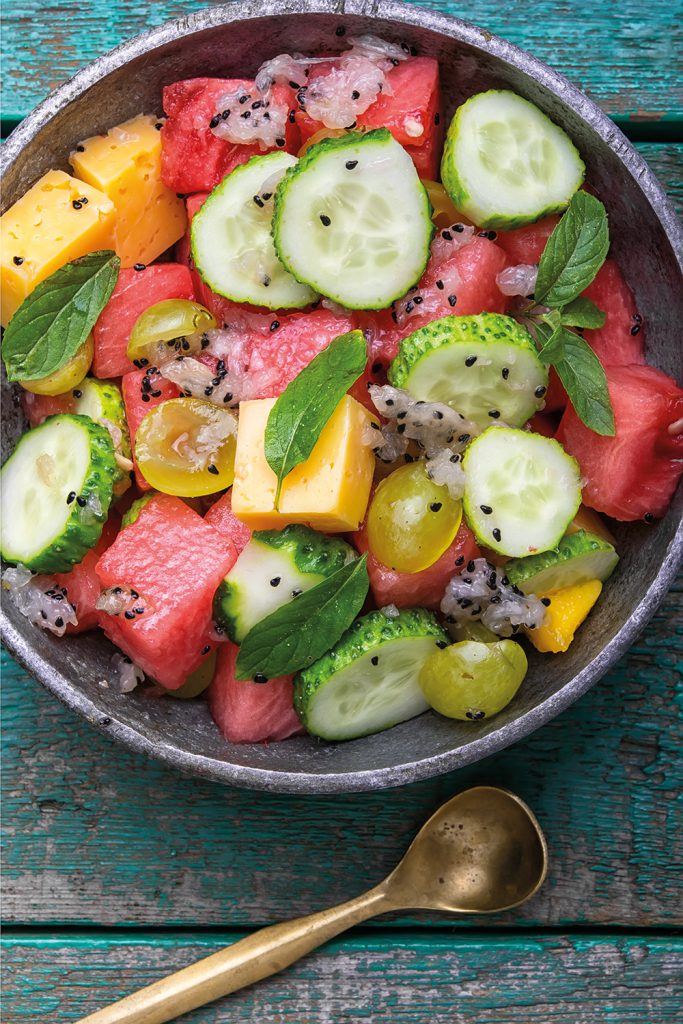 The team also regularly posts news and events on the website, including announcements of recent scientific discoveries, upcoming presentations by CucCAP researchers, and news of disease outbreaks during the growing season. To further help keep the cucurbit community informed, the team also disseminates a monthly newsletter called the CucCAP Chronicle, which features news and events that are posted on the CucCAP website.

So, where will the CucCAP team’s work lead? In the near future, the team hopes to develop a number of disease-resistant breeding lines for the cucurbit industry, which will lead to corresponding improvements in yields, sales and economy. If the team’s successes so far are anything to go by, then the future for farmers is looking bright indeed. 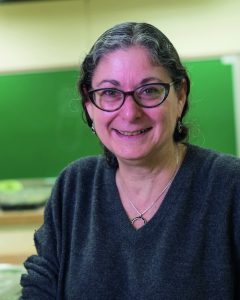 Dr Rebecca Grumet began her scientific career with a BS from Cornell University and PhD from Michigan State University, which was followed by a postdoctoral fellowship in plant molecular biology at Duke University. A long and successful career has led her to her current role as a Professor and W.J. Beal Outstanding Faculty in the Department of Horticulture at Michigan State University. Her research involves investigating the genetics of vegetables, with a current focus on the development and disease resistance of cucurbits. Dr Grumet has published over 100 scientific papers and several books. She is currently the lead investigator of the CucCAP project.