For thousands of years, humans have been fascinated by what lies beyond our own planet. One of the ways to study the most distant objects in our universe is using radio telescopes. By studying radiation emitted in the radio band of the electromagnetic spectrum, scientists can determine the magnetic field strength, gas density and energy content of planets, stars and galaxies. Astronomer Dr Robert Mutel has been using these techniques for decades, and has recently discovered ways to map a star’s magnetic field using radio emission.

Professor Robert Mutel, Professor of Astronomy at the University of Iowa, has been interested in astronomy for a long time. ‘As with most children, I was fascinated by the stars and especially the idea of extra-terrestrials,’ he says. ‘This sounds strange, but at the age of 11 or 12, I met a barber in NYC where I lived that called himself the Mystic Barber.

‘He claimed to communicate with aliens using a tin-foil helmet device on his head. I was doubtful, but I decided to try to find UFO spacecraft by staying up all night lying in a lawn chair and recording every strange light I saw. That was the start of my career as an astronomer!’

Although he is yet to discover aliens, Professor Mutel has been studying planets, stars and galaxies using radio emission for decades. As an undergraduate majoring in Physics at Cornell, he witnessed the excitement and fierce debates surrounding pulsars, which had just been discovered in England. At the same time, the rapidly rotating stars were being observed with much better precision at Arecibo Observatory, the world’s largest radio telescope, which Cornell operated.

‘The astrophysics seminars were like attending a World Cup game,’ Professor Mutel says, ‘with intense intellectual fervour and a sense that history was being made. I was hooked, and decided to attend graduate school and become an astronomer.’ 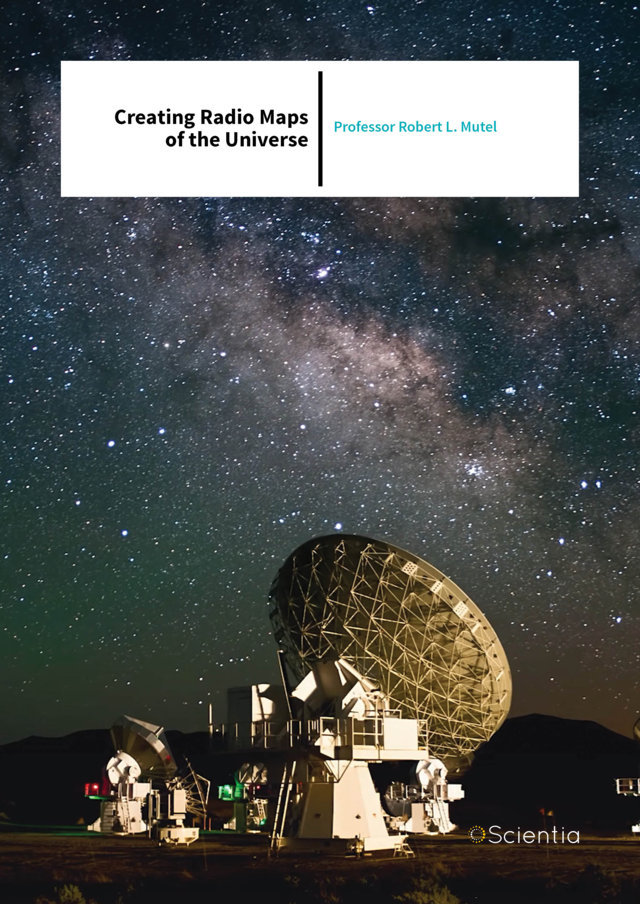 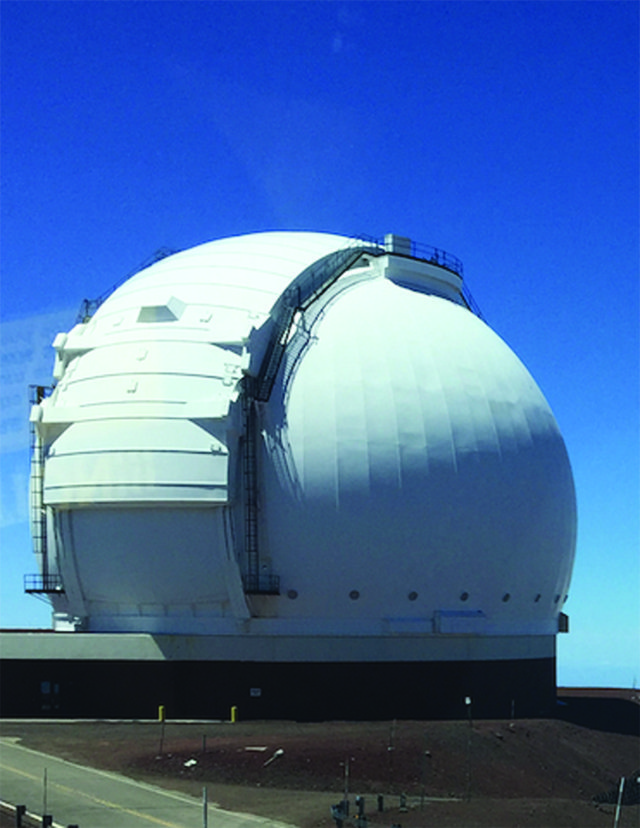 ‘We use the VLBA, a global array of radio telescopes, to map locations of stellar radio emission with a precision of less than one milliarcsecond, the equivalent of being able to read a newspaper in London from New York’

‘Most of my research has focussed on understanding astrophysical plasmas in a variety of environments,’ Professor Mutel says. ‘I study mostly radio emission from these plasmas, usually with radio interferometers that provide highly detailed “radio maps” of the emission.’

A basic astronomical interferometer uses two telescopes, but they can be made up of arrays of multiple telescopes. They work together to provide a higher resolution image, through the superposition of signals gathered by each telescope. The advantage of this technique is it can theoretically produce images similar to those of a much bigger telescope. For a single telescope to produce an image of the same quality as that of an array, it would have to have an aperture equal to the separation between the component telescopes. Professor Mutel and his team use a type of interferometry called very long baseline interferometry (VLBI), where the baselines, or distance between component telescopes, exceed 10,000 km.

By studying spectral characteristics, time variations, and spatial extent of emissions, researchers can determine physical properties, such as gas density, magnetic field strength, and energy content of both the gas and magnetic field. These in turn provide clues to the possible ways the parent object was formed – which could be a galaxy, planet or star – and what its probable life cycle will be.

Professor Mutel started off his career looking at ‘active galaxies’. This refers to galaxies whose centres contain a massive black hole, which produces intense beams of radio emission.

Later Professor Mutel moved onto studying planets, including the magnetic fields of planets in our solar system. He found that the magnetospheres of Earth, Jupiter, Saturn, Uranus, and Neptune produce intense radio waves through a process called the electron cyclotron maser instability (ECMI).

‘We built the first radio interferometer in space that precisely determined the location of these emissions, which turned out to be above the auroral regions of the Earth,’ Professor Mutel explains. ‘In fact, the Earth’s aurorae and ECMI radio emission are two manifestations of the same phenomenon.’

Recently, Professor Mutel and his research team have been studying the radio emission from stars. In particular, they have been learning how to gather information about the magnetosphere of stars from its radio emission. ‘We use the VLBA, a global array of radio telescopes, to map the radio emission location with a precision of less than one millisecond, the equivalent of being able to read a newspaper in London from New York,’ Professor Mutel tells us. In recent studies, his team have done so with two particular classes of stars called active binaries and ultra-cool dwarfs. 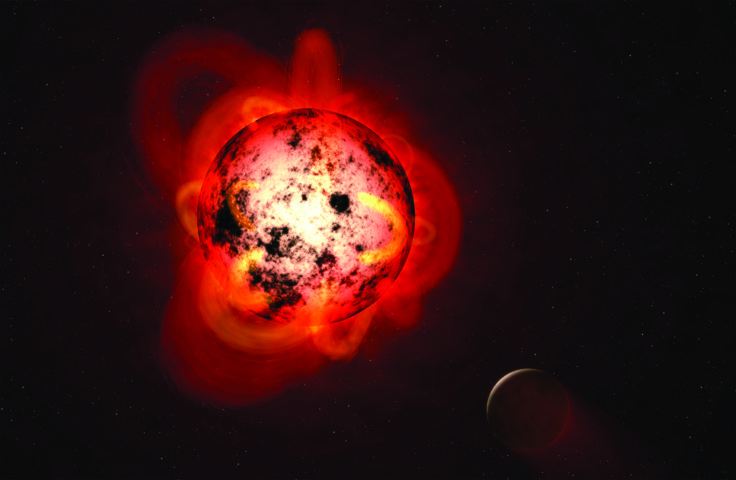 Active binaries are pairs of stars that orbit each other, meaning that their brightness varies from our viewpoint on Earth. These stars are interesting because stars in short-period binary systems often show signs of enhanced magnetic activity. These can include persistent photospheric spots, ultraviolet chromospheric emission, X-ray emission from hot coronae, and non-thermal radio emission.

In a 2010 study, Professor Mutel and his group looked at the first of these active binaries ever to be discovered. The system called ‘Algol’, also known as the ‘Demon star’, is a system of three stars thought to have first been documented by the ancient Egyptians 3,200 years ago. The Demon star has been a source of intrigue for astronomers ever since, and is one of the best-documented binary stars as a result.

Two of the three stars in this system are in a very close binary orbit, with one of the stars eclipsing the other every 2.86 days. This blocks the companion’s light for a total of six hours each eclipse, causing a noticeable dip in its light that can be observed even without a telescope. Professor Mutel and his team studied the Alogl binary system to understand more about its magnetic activity. They found that the cooler component had a large coronal loop extending out of its surface oriented toward its companion star. This hints that a persistent magnetic field structure, with an asymmetric shape, is aligned between the stars.

A year later, Professor Mutel and his team published another paper, this time looking once again at Algol, and also another triple star system called UX Arietis, located in the northern zodiacal constellation of Aries. Both star systems are made up of two larger stars orbiting each other, with another, less-massive star orbiting the close binary pair. In this paper, the scientists pinned down the exact orbits of both systems of orbiting stars, using an array of eleven telescopes located across the globe from Hawaii to Germany. They also found an interesting feature on UX Arietis based on the radio signals they gathered. After noticing a single, partially resolved emission region, they deduced that the signal was likely to be associated with a persistent polar spot observed optically using Doppler imaging.

Two years ago, Professor Mutel and a team published a paper looking at another active binary star system, this one called HR 5110. They used a global radio interferometer to study the binary system over six observing periods spanning 26 days. The team was trying to determine the exact location of radio emission within the binary system. They wanted to see if it came from a single active star, or from a region of magnetic interaction between the stars. The results pointed towards there being a single active component on one of the stars, instead of interactions between stars. 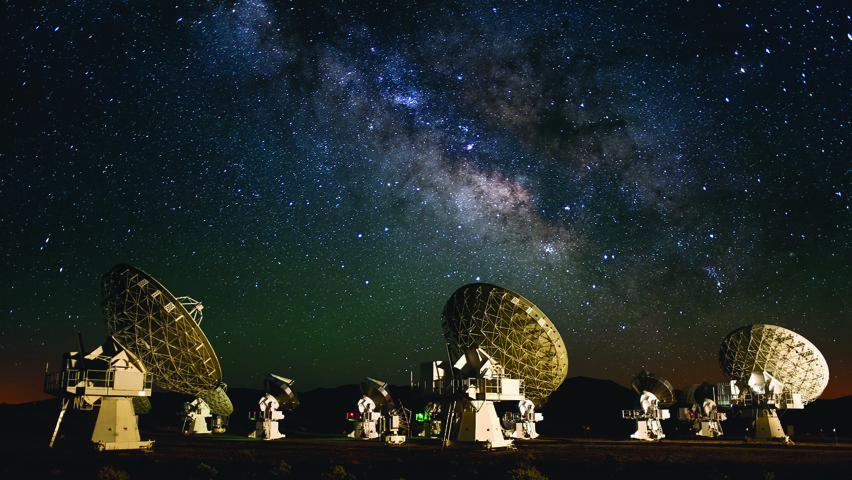 More recently, Professor Mutel has moved on to investigating another, completely different type of star known as an ultra-cool dwarf. Ultra-cool dwarf stars are very small, about one tenth the radius of the Sun, and have effective surface temperatures of less than half of the Sun’s surface temperature. This means that they are barely hot enough for nuclear fusion to occur. Surprisingly, many ultra-cool dwarf stars emit intense, highly polarised pulsed radio emission, making them extremely interesting to Professor Mutel and his team.

‘These stars have ECMI emission, just like the Earth, and it is also highly beamed, like a pulsar or a rotating lighthouse,’ Professor Mutel says. ‘This causes the star, which is spinning about once every few hours, to emit short pulses of radio emission as seen from Earth.’

By modelling the frequency-time structure of the pulses, the scientists can infer where the emission is located on the star’s surface and the strength of the magnetic field. ‘In other words, we can make an image of the star’s active regions, this is analogous to taking a conventional optical image of the Sun’s sunspots on its surface,’ he says. The technique, which he referred to as ‘spectral tomography’ is analogous to creating a three-dimensional image of the brain using time-sliced images from a medical CT scanner.

Professor Mutel has recently been awarded a three-year grant from the National Science Foundation (NSF) to continue this work. He hopes to study the dynamical spectra of more of these low-mass ultra-cool dwarf stars that exhibit pulsed radio emission. Then, he and his team hope to use these studies to come up with detailed models of the stars’ magnetospheres. 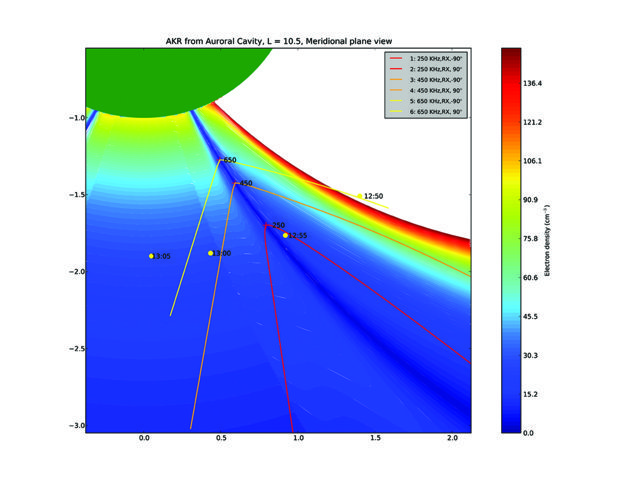 Moving from Radio to Optical

After forging a career from investigating radio signals, Professor Mutel is hoping to take a slightly different direction with his research in the future. ‘After a long career studying mostly astrophysical radio emission, I am now pursuing some research using optical telescopes,’ he explains.

Professor Mutel built the Iowa Robotic Observatory (IRO) in Arizona, a small but powerful robotic optical telescope, almost 20 years ago, and now he is hoping to use this experience towards building a new optical instrument. ‘A graduate student and I recently applied for a patent for an innovative new miniaturised optical spectrometer,’ he says.

The optical observations are not going to completely take over his time, however. ‘Of course, I am not abandoning my radio studies, but new intellectual challenges are what started my career – I suppose that’s what I have always enjoyed.’ 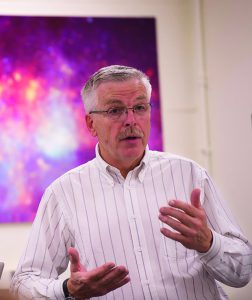 Since 1986, Professor Robert L. Mutel has been a Professor of Astronomy at the University of Iowa. He obtained his BA in Physics at Cornell University in 1968 and a PhD in Astrophysics at University of Colorado in 1975. In 2015, he received the University of Iowa Hancher-Finkbine Faculty Award and Medallion for teaching and research excellence. Mutel Peak in Antarctica is named in honour of his Antarctic magnetospheric research and service. He is also the director of the Iowa Robotic Observatory.