Agriculture in the semi-arid US Southern Great Plains depends on irrigation water from the Ogallala Aquifer, the largest in the country. With the aquifer in decline, new ideas will be needed to ensure the future of irrigated agriculture in the region. Dr Sangamesh Angadi and his colleagues at New Mexico State University have come up with a simple, cost-effective system of interspersing crops in circular pivot fields with rings of native grasses, to buffer against the effects of damaging winds, improve water cycle, reduce soil erosion, and improve ecosystem services.

Improving agricultural productivity is essential to feed the world’s growing population. One of the limiting factors to achieving this is the availability of fresh water, itself under increasing pressure from human demands. Climate change exacerbates the problem, leading to more frequent droughts and erratic rainfall patterns. Simultaneously, intensive agriculture leads to environmental degradation and the loss of valuable ecosystem services. In the semiarid agricultural region of the United States Southern Great Plains, one agronomist believes his idea could be part of the solution to these complex challenges.

From Prairie to Dust, and Dust to Fields

The Southern Great Plains was once a prairie, grazed by roaming herds of bison. When settlers arrived, they ploughed the native grassland to grow crops. Intensive cultivation approaches, together with drought, led to the loss of the grass cover and damage to soil structure. In the absence of the moisture trapping properties of grass and deep root systems, the region’s strong winds and sporadic, intense rains severely eroded the soil. The 1930s saw devastating dust storms in the region, known as the Dust Bowl. Salvation came in the form of new irrigation techniques, which allowed farmers to draw on the Ogallala Aquifer – an ancient underground lake – transforming the region into one of the most productive parts of the US, where agriculture is a vital part of the local economy.

The aquifer currently supports over 5.8 million hectares of agricultural land, covering the Midwestern landscape with green circles of crop growth produced by centre pivot systems, which irrigate the circular field. For the local population, it is also an important source of household water. However, the aquifer is only replenished slowly, by rainfall and snow melts that are becoming increasingly scarce due to climate change. It is now overexploited, and within a few decades, 35% of the irrigated land in the area could be dryland.

‘There is a need to assess linkages between the Food-Energy-Water components of CBS and develop quantitative relationships to advance this technology to large scale adoption in the Southern Great Plains’cess.’

Soil erosion, typically held in check by irrigation, is now on the rise. Dust storms have returned to the region, and local farmers fear a repeat of the Dust Bowl could be on the way. Because of the water shortage, they are increasingly forced to restrict the area of land they can irrigate, resulting in ‘partial pivots’, with a sector of their circular crop fields remaining unirrigated. High rates of evaporation from the irrigated topsoil, especially early in the growing season, mean that more than 50% of the water applied is lost to the atmosphere. Crop plants at the edge of the pivot are particularly vulnerable to the harsh conditions, and are often shorter than the rest of the crop, or may even be killed. 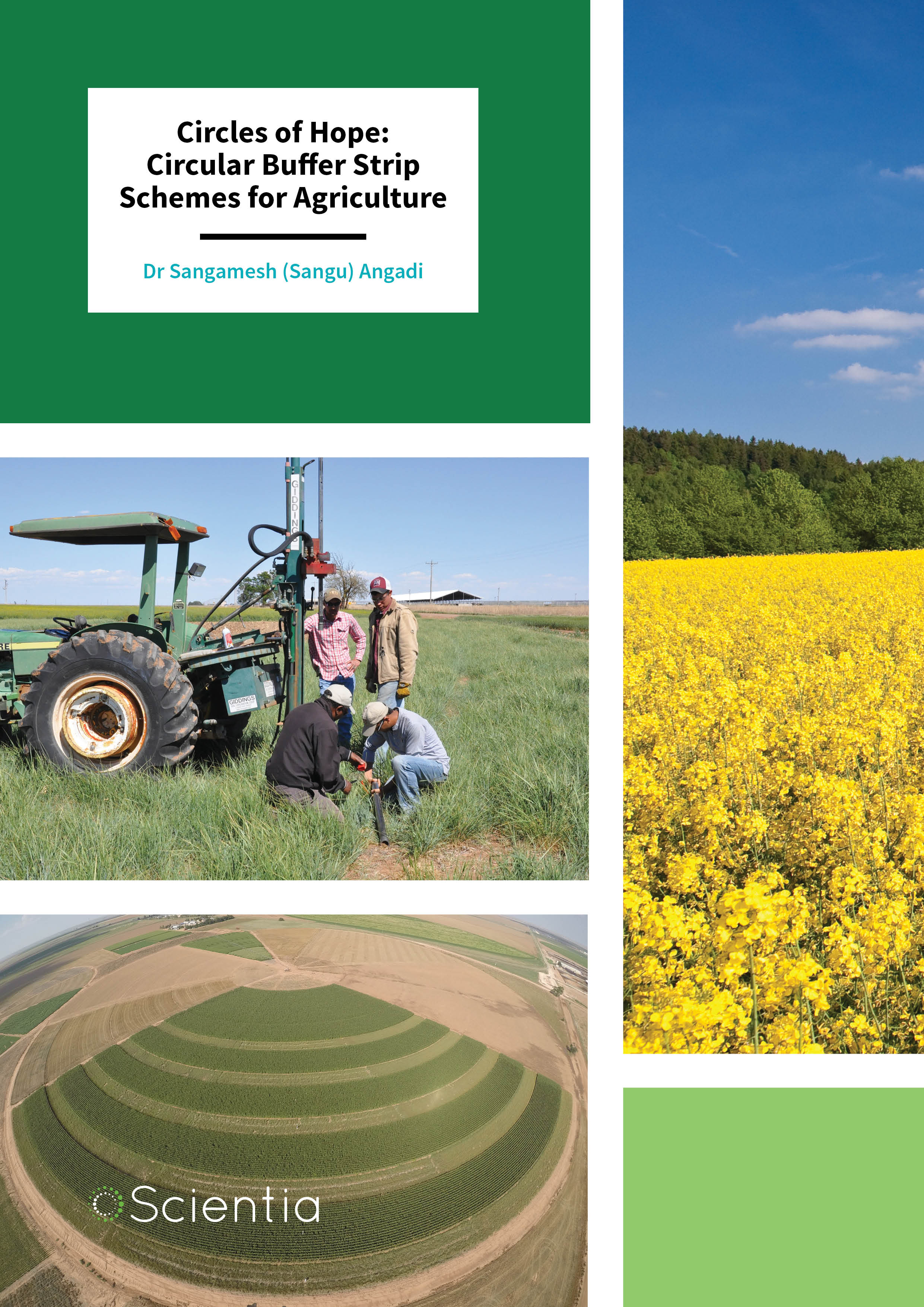 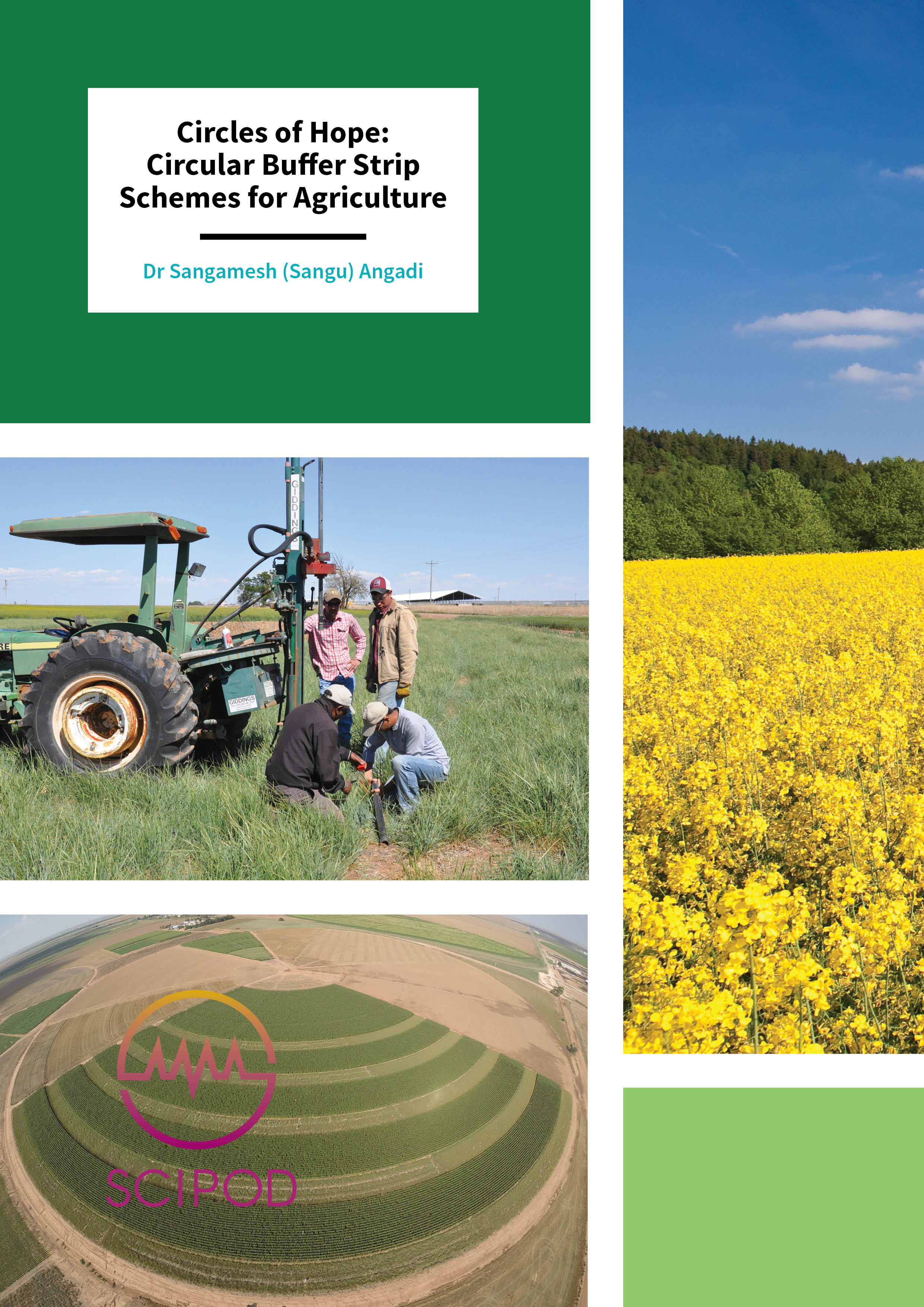 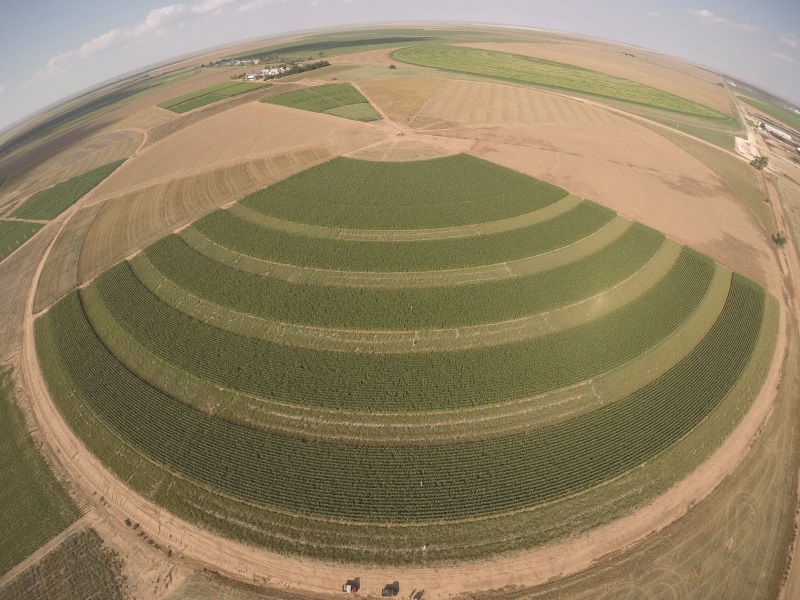 Dr Sangamesh Angadi is an agronomist at New Mexico State University in Clovis, based in the Department of Plant and Environmental Sciences and Agricultural Science Center. He and his colleagues believe that the natural prairie ecosystems that dominated the Southern Great Plains in the past could hold the key to the future of agriculture in the region.

The grasses protect the land from soil erosion in several ways: their deep root systems anchor the soil in place. They also have the ability to trap water from rain and snow, gradually transferring it to the soil, and buffering topsoil from the effects of heavy rain. By acting as wind barriers, they reduce the evaporation of soil water, and create more humid microclimates. 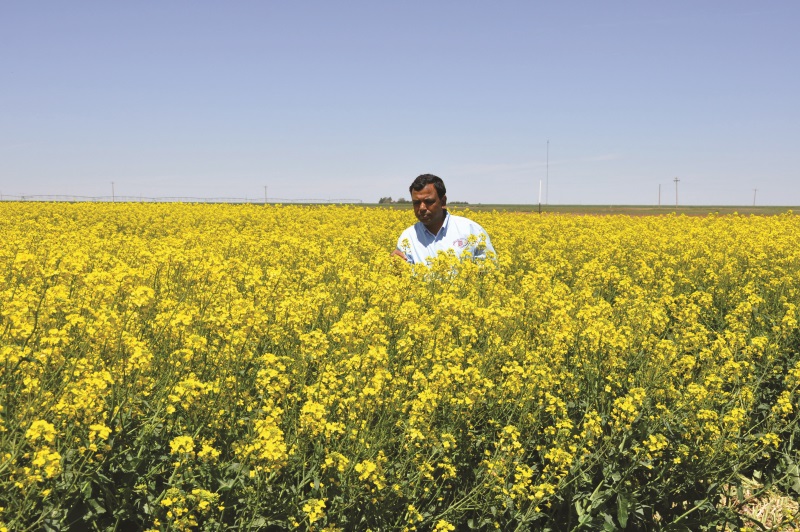 Strips of vegetation planted alongside crops are called buffer or wind barrier strips, with wind protection most pronounced when the strip is at a right angle to the direction of the wind. These strips show great benefits for agriculture in windy climates, reducing crop water consumption and improving yields, through effects such as reducing evaporation and damage to seedlings by windborne soil particles. Although research into this effect in irrigated crops has been limited to date, a New Zealand study found that wind breaks reduced water use by up to 20%.

Dr Angadi and his research team came up with the idea of reintroducing elements of the original prairie grassland into centre pivots, regaining their protective functions and improving productivity. This involves redesigning the partial pivot plot, turning the unirrigated portion into circular buffer strips of native perennial grasses and forbs – CBS for short – interspersed with circles of the crop.

This is a simple, elegant solution with several advantages. Planting the buffer strips in circles ensures that part of the strip will always be at a right angle to the direction of the wind, protecting the crop strips from wind and sand abrasion regardless of any changes in direction and reducing water evaporation from soil surface wetted frequently by centre pivot irrigation systems. It also fits in with the widely used circular pivot field design. Using multiple buffer strip circles is expected to increase their protective effect, and this approach is easier to deploy and manage than the alternative of planting tall trees as a windbreak around the pivots’ outer edges.

In addition to reducing water consumption, the team expects that there will be further, indirect benefits to agricultural productivity, and to the surrounding environment. The buffer strips will help to prevent the runoff of water, decreasing soil erosion and retaining nutrients within the system. The system will work efficiently even if wind direction and slope of water runoff are different. These nutrients will remain available for the crops at a later stage and reduce the need for fertilisers. The team also predict that the organic matter content of the soil will also improve. 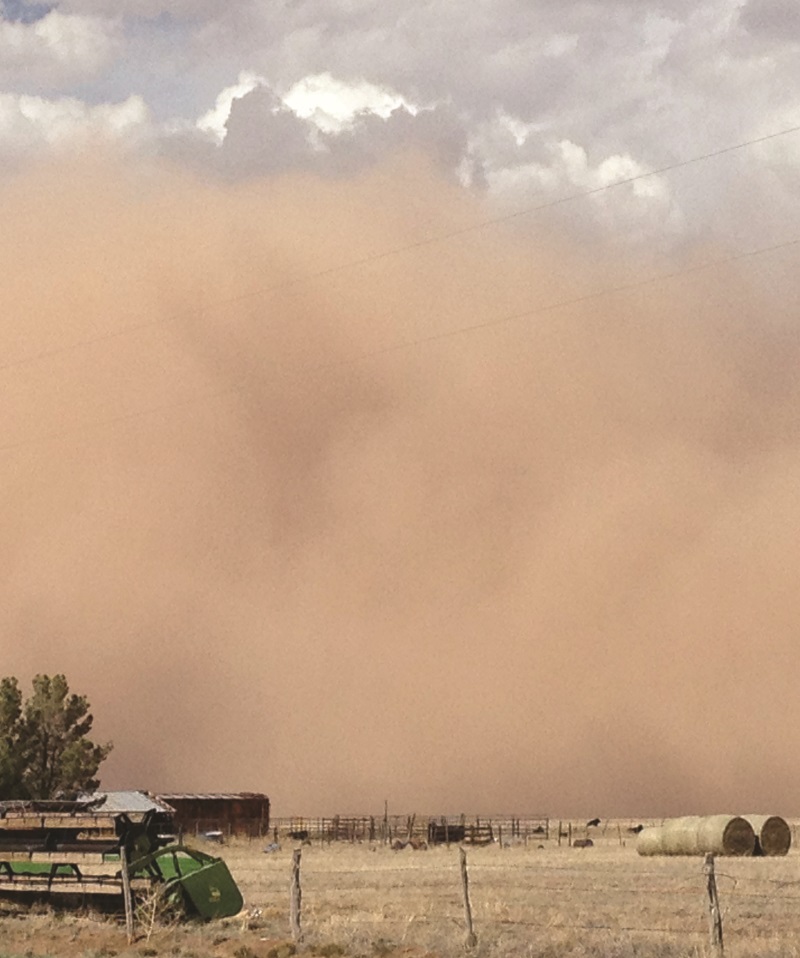 Similar to natural ecosystems, the presence of native grasses and forbs is likely to support insect predators, which will reduce pest numbers, decreasing the levels of pesticides needed. In turn, reduced pesticide together with increased habitat and forage, will boost pollinator numbers and increase the local biodiversity. Due to addition of perennials into annual system soil microbial, bird and animal diversity is also expected to increase. The buffer strips will also benefit the environment through preventing the pollution of surrounding water bodies with fertilisers and pesticides that would otherwise be carried in runoff.

The environmental advantages of planting with perennial grasses in concentric circles extend beyond the local scale: as well as absorbing atmospheric carbon dioxide – the key driver behind climate change – they can absorb nitrogen compounds that are also harmful to the environment. The system is also expected to be more energy-efficient, as it reduces the need to pump irrigation water, perform tillage and provide inputs.

Dr Angadi’s team’s CBS approach compares favourably to other mechanisms of reducing wind effects and evaporation losses, such as the relatively expensive drip-irrigation system. Tillage to increase soil surface roughness, or planting with herbicide-terminated wheat for the protection effects of its stubble, require higher inputs of water and energy. In comparison to corn, buffer strips of perennial grasses require little maintenance and relatively low amounts of fertiliser, pesticides and irrigation water. The grasses have a longer growing season, which maximises their ability to modulate the field’s microclimate and absorb carbon dioxide. Finally, grass buffer strips could also be used for livestock forage, as part of an integrated farming system.

Dr Angadi and his colleagues are carrying out a series of preliminary experiments to optimise their design, supported by a USDA-NIFA seed grant. ‘There is a need to assess linkages between the Food-Energy-Water components of CBS and develop quantitative relationships to advance this technology to large scale adoption in the Southern Great Plains,’ they explain in their proposal. To make this happen, the team will assess the performance of the CBS system from multiple perspectives, measuring its effects on productivity, profitability and the environment. They are hoping to identify the most suitable width, species composition, and number of buffer strips. The grass strips must be wide enough to offer the potential benefits, but not so wide as to greatly restrict the area available to the main crop, which is often corn.

Another important factor is the size of the equipment that will be needed to maintain the plot. Farm operations on the circular strips, including planting, have become possible in recent decades thanks to the development of RTK-GPS guiding systems, which are increasingly common in the Southern Great Plains. Pivots attached to lower-yielding irrigation wells would be suited to wider buffer strips.

The team plans to use tall native grasses and a few native forbs, with the outermost buffer ring composed of tall perennials to modulate the harsher conditions. The grasses must be selected carefully so as not to compete for resources with the main crop. One of the challenges that Dr Angadi and his team anticipate is that the design may complicate the process of aerial spraying. However, other processes may be easier – for example, farm maintenance vehicles can drive on the buffer strips to access the centre pivot. 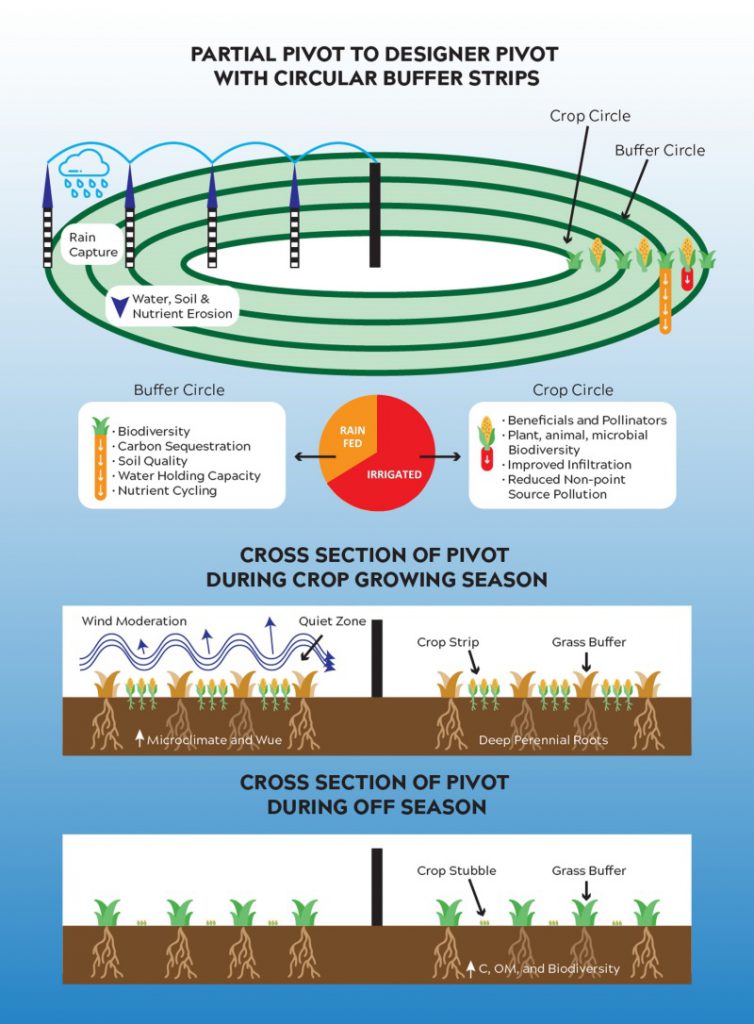 The team is currently conducting the trial at NMSU Agricultural Science Centre at Clovis (which can be seen in the satellite image at 34.598, −103.217) using corn as the main crop, and comparing pivots with and without buffer strips. They are monitoring a suite of environmental parameters, using temperature and humidity sensors, anemometers to measure wind speed, and lysimeters to measure soil evaporation. These measurements will allow the team to quantify the modulatory effect on wind and microclimate of using different numbers of strips, and varying their positions, as well as the time taken for the effects to become apparent. They will also assess differences in the biomass of corn harvested, the yield of grass forage, the changes in soil quality, and the energy inputs to the system, as well as surveying the insects on the plots to understand biological pest control services.

Once the team has fine-tuned the system’s design, it can be tailored to suit a range of conditions, depending on the needs of individual farmers, and the particular climate. The idea has already gained the support of local stakeholders, including the major regional centre pivot irrigation company and a grass seed company. Farmers are also willing to try it out, as one remarked: ‘Show us the benefits, and we will make it work with our equipment’.

The team’s CBS approach has the potential to help ensure the long-term sustainability of agriculture in the Southern Great Plains, in line with the four principles of the National Academies of Sciences’ future farming strategy: improving the productivity of crops, the condition of the natural environment, agricultural profitability, and the quality of life for agricultural communities. Dr Angadi and his team are excited about its prospects, and believe that its effects on productivity and ecosystem services will only increase over the longer-term. 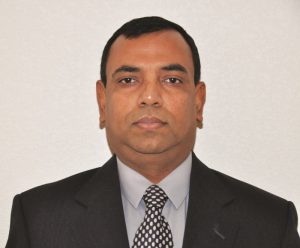