Dr Simon Humphrey and Sam Dunning at the University of Texas at Austin have created a new lanthanide-based chemical sensor that can identify trace levels of water in many different solvents, and can even distinguish between normal water and ‘heavy water’. The team’s new material could potentially be applied to medical imaging and for cleaning up chemical spills.

From your schooldays, you may remember using universal indicator or litmus paper to measure pH. While these simple tests are well known and widely available, more sophisticated chemical sensors are needed to help tackle issues such as cleaning up chemical spills, remediating old industrial sites, and detecting radioactive contamination in water supplies. Although many techniques are available for these applications, very few allow for rapid on-site detection, with samples often needing to be sent away to a lab for analysis.

Now, Dr Simon Humphrey, Sam Dunning and their colleagues at the University of Texas at Austin have developed a new class of lanthanide-based materials, which could form the basis of a new generation of rapid chemical sensors that could be used for these applications.

Due to their light-emitting – or ‘photoluminescent’ – properties, molecules containing lanthanide (Ln) ions (charged atoms) have been increasingly explored as chemical sensors. The term ‘lanthanide’ refers to the group of elements with atomic numbers 57 to 71, from lanthanum (La) to lutetium (Lu). When grouped together with the chemically similar elements yttrium and scandium, you may have heard them described as ‘rare earth elements’, and they have applications in electronics, high-strength magnets and catalysis. 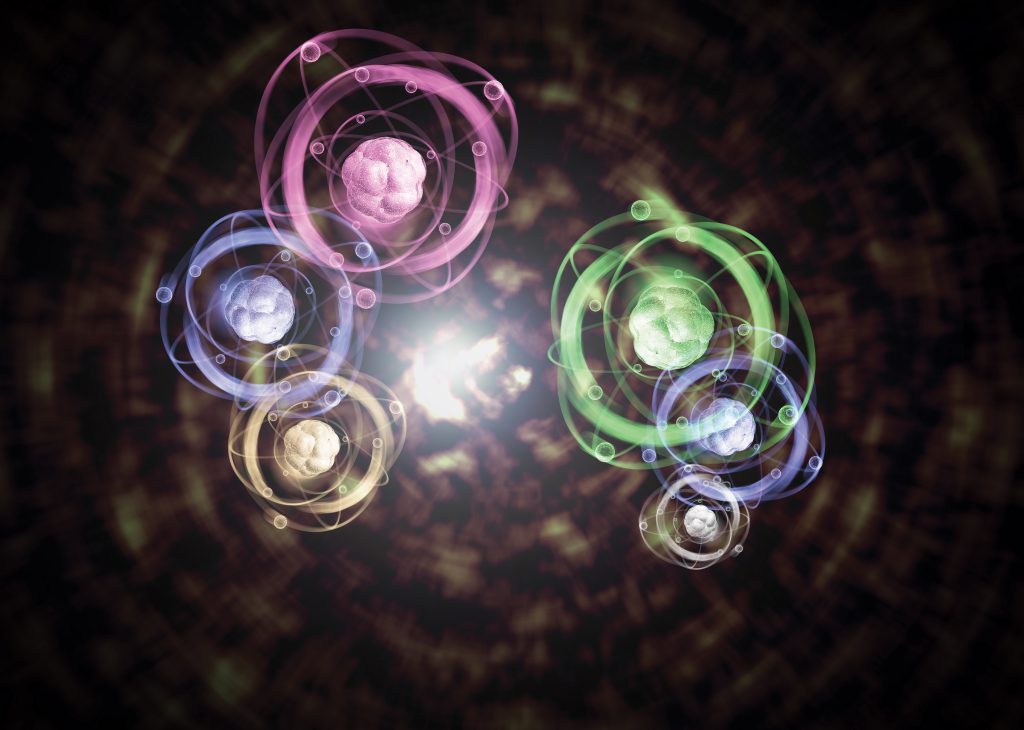 After absorbing light, lanthanide ions emit visible and infrared light at specific frequencies. This means that a solid-state sensor (for example, a dipstick) could be easily read either using the naked eye or a UV-reader to detect chemical impurities in a sample. Each type of lanthanide ion (for example europium or terbium) emits a very distinct frequency of light that is characteristic of that particular element. This means that lanthanide-based chemical sensors can be tuned to detect a specific impurity.

For an element to exhibit photoluminescence, it must first become ‘excited’ by absorbing light energy. However, lanthanide ions are difficult to excite by directly absorbing light. In a molecule, excitation of lanthanide ions is commonly achieved by surrounding them with light-absorbing organic molecules known as ‘chromophores’. A chromophore is part of a molecule that readily absorbs light, being present in dyes and in chlorophyll, giving leaves their striking green colour.

Light energy absorbed by the chromophore is transferred to the lanthanide ions in the molecule, which then re-emit light with high efficiency. This is quantified by the photoluminescence ‘quantum yield’, which describes the efficiency with which absorbed light is re-emitted from a material – so a high quantum yield is desirable in making chemical sensors. 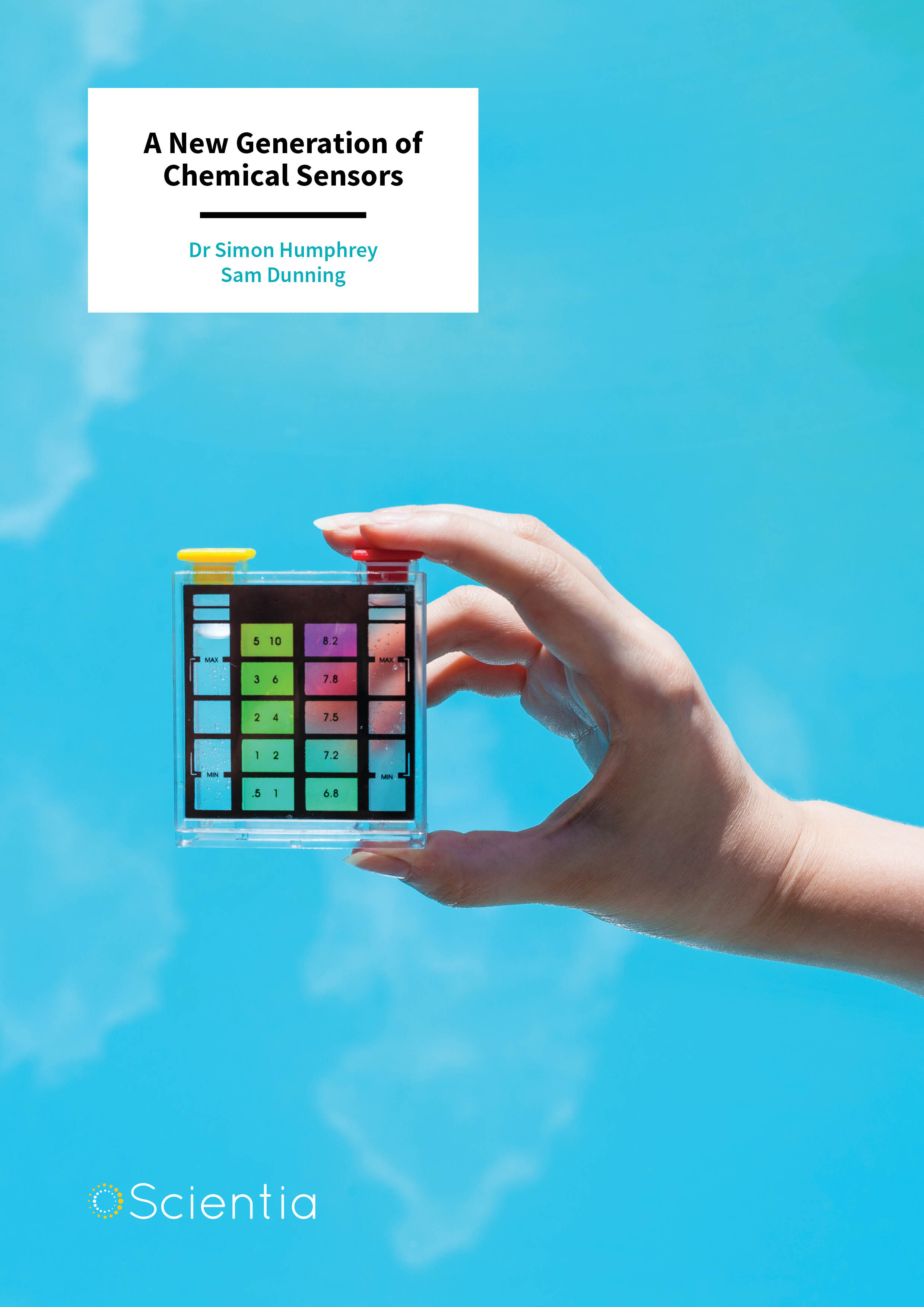 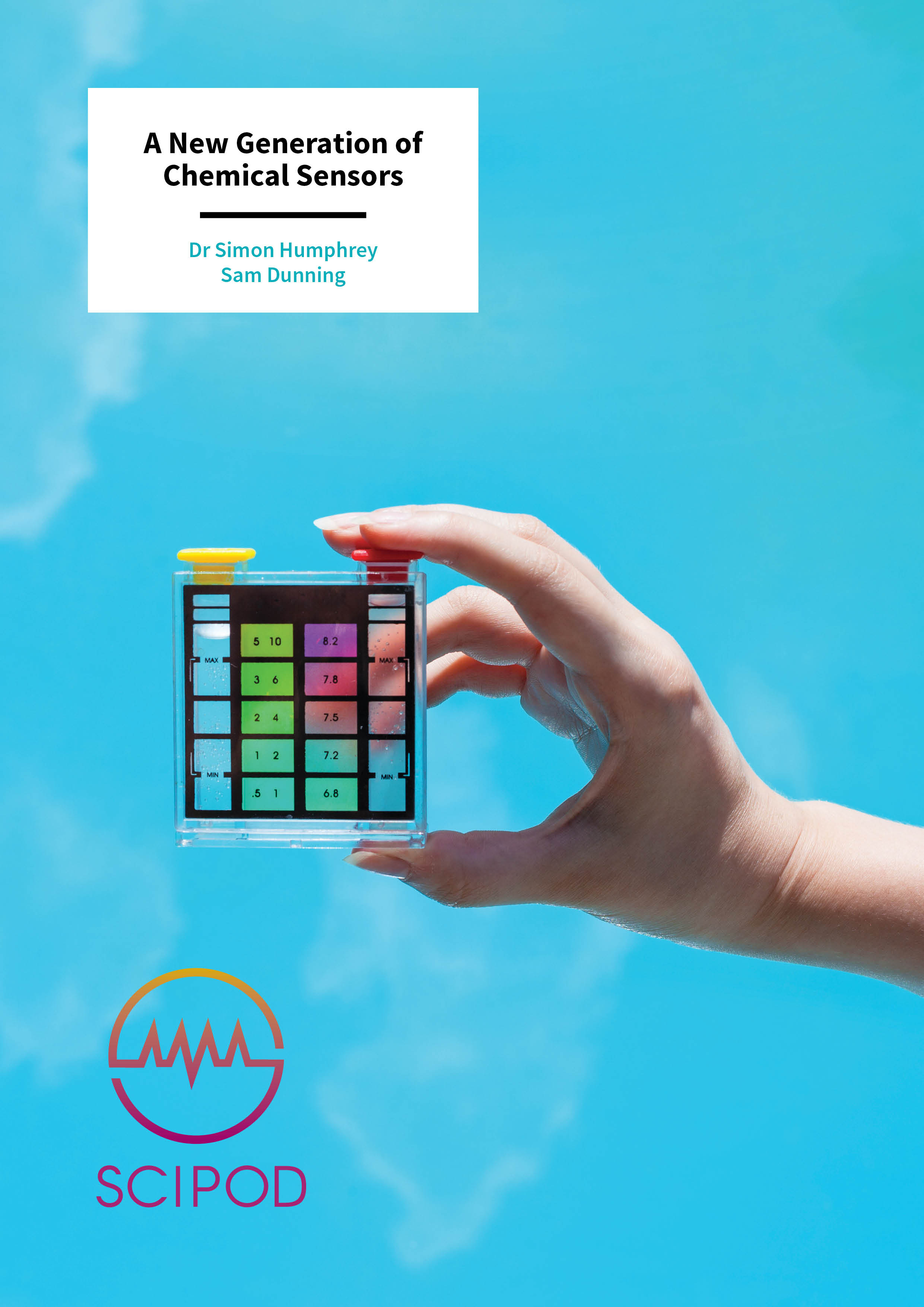 Dr Simon Humphrey, Sam Dunning and their colleagues at the University of Texas at Austin focused on developing a stable and tuneable material that would exploit the light-emitting properties of lanthanides for creating chemical sensors. While previous research in the Humphrey lab has investigated the potential of metal-organic frameworks (MOFs) for storing gas and catalysing reactions, the team recently developed a new MOF with potential uses in medical imaging, chemical clean-up and detecting chemicals produced due to radiation exposure, and published their work in the journal Chem (Chem 2017, DOI: j.chempr.2017.02.010).

Composed of a network of metal ions with co-ordinated organic ligands, MOFs are 3-dimensional porous materials made up of organic molecules and metal ions (such as lanthanide ions). MOFs containing lanthanide ions benefit from the high quantum yields of lanthanides to produce a material that can give a large photoluminescence response from a small amount of sample.

Maximising the efficiency of light emission is crucial in creating a chemical sensor that is portable and practical for use in the field, without needing large laboratory equipment off-site. The wider body of research into MOF chemistry has established a number of design principles that enable researchers to have control over the distance between the lanthanide ions in the solid material. This ‘tuneability’ allows the luminescence properties of the MOF to be optimised for sensing applications. 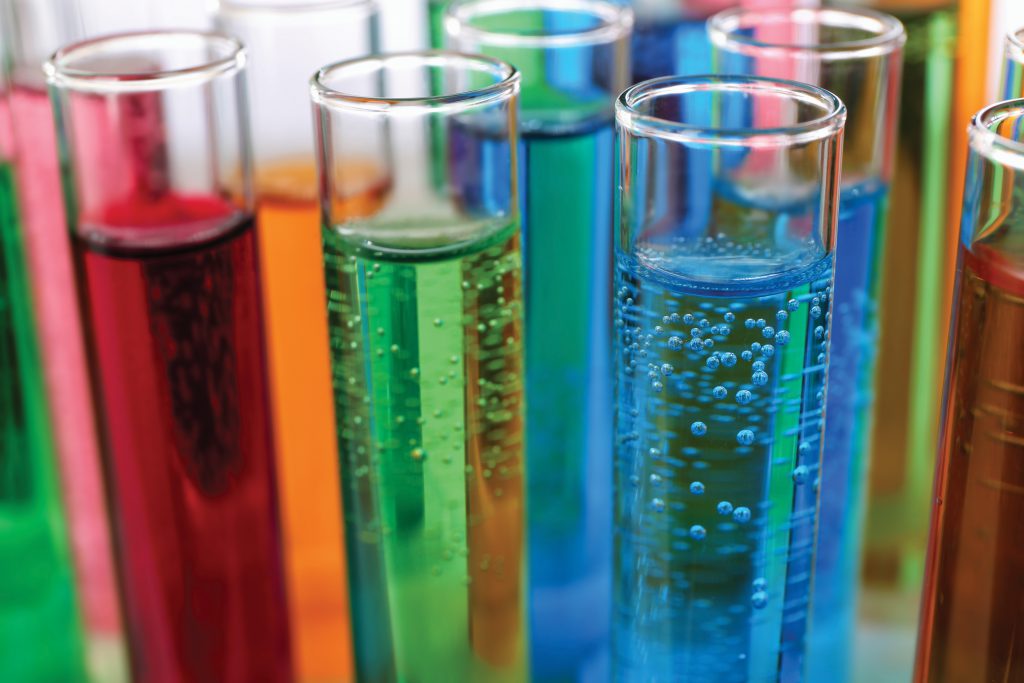 While lanthanide-based MOFs have been reported as good chemical sensors for pH, explosives and temperature, many of these sensors are incompatible with a broad range of solvents, or are only stable over a small pH range. In their recent Chem paper, Dunning and Dr Humphrey report the synthesis of an MOF material called PCM-22, which is made up of lanthanide ions and a chromophore.

The team discovered that PCM-22, which contains controlled amounts of lanthanide ions, is able to detect trace levels of water in a variety of solvents including ethanol and acetone. These solvents had previously been incompatible with conventional chemical methods of detecting low concentrations of water. So how does their detector work?

When PCM-22 is placed in a solvent, solvent molecules (such as water) move through its pores and bind to it. Then, when UV light is shone on PCM-22, its chromophores absorb energy, which is transferred to the lanthanide ions and the material emits specific colours of visible light. The exact frequency of emitted light depends on the type of solvent molecules that are interacting with PCM-22, as its chemical environment affects its excitation and photoemission energy. In other words, the vibrations of the solvent molecules disturb the lanthanide emissions in a unique way, depending on the solvent-lanthanide combination.

Technology that employs visible light is advantageous as it can be read by the human eye, or using a standard digital camera (even on a mobile phone) in conjunction with appropriate software. The unique signatures of colour and brightness emitted by the team’s new material can thus be used to identify and quantify many different chemicals. Once the material has been calibrated against known samples, a catalogue of fingerprints for different solvents can be created, and easy-to-use ‘dipstick-style’ sensors could be made.

Most significantly, not only can PCM-22 detect low concentrations of normal water (H2O) in a range of different solvents, but it can also distinguish between normal water and so-called ‘heavy water’ (D2O), at levels as low as 10 parts per million.

Heavy water, or deuterium oxide (D2O), is so-called because of its composition. A typical hydrogen atom (H) has one proton in its atomic nucleus with one electron orbiting around it. A deuterium atom (D) is very similar, containing one proton with one electron, but it also has one neutron in its nucleus. Because protons and neutrons are almost of the same mass (electrons have virtually no mass), deuterium can be thought of as a ‘heavy’ hydrogen atom, being roughly twice the mass of hydrogen, but with the same chemical properties due to its single proton and single electron.

D2O is simply a molecule of water (H2O), which contains deuterium atoms in the place of hydrogen atoms. Once mixed together, heavy water is almost indistinguishable from normal water, because of their close chemical and physical properties.

These properties have been used by scientists to our advantage. For example, deuterium-containing solvents are used in nuclear magnetic resonance spectroscopy (NMR), which works in a similar way to hospital MRI scanners. But the similarities can also pose problems: when water comes into contact with sources of radiation, such as radioactive uranium, neutrons can be incorporated into H2O water molecules, creating D2O. Because of this, the presence of D2O can be a sign that water has become contaminated by radioactive waste. But, since D2O is so chemically similar to normal water, how can we distinguish between them? 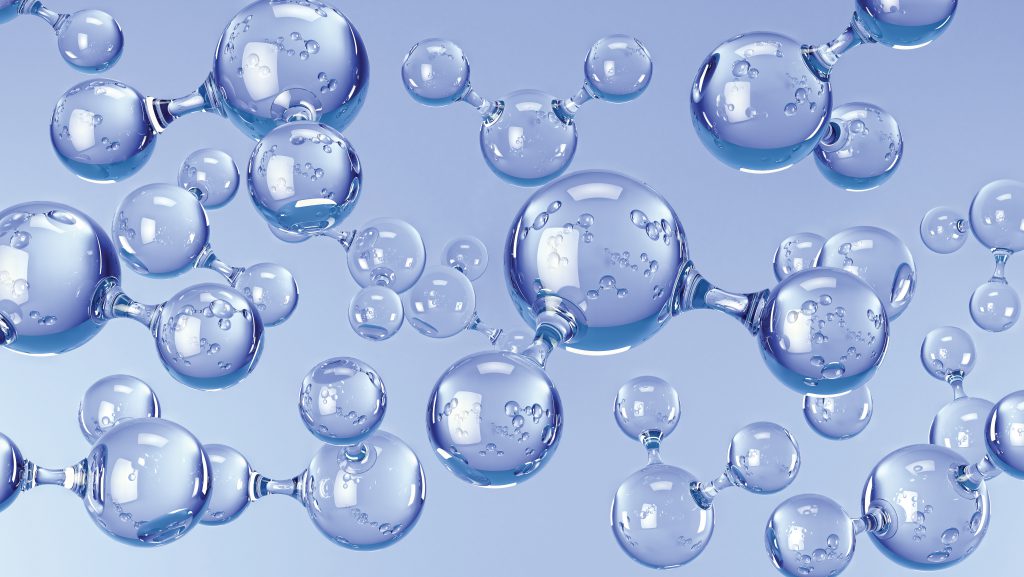 The Many Applications of PCM-22

Distinguishing between normal and heavy water normally requires a costly test using a laboratory-based machine. However, because the frequency of light emitted by PCM-22 is dependent on the nature of the interacting solvent molecules, and since the vibrations of H2O and D2O molecules are different (due to their different masses), PCM-22 can distinguish between these two types of water.

‘We make the material with europium and terbium ions,’ says Dunning. ‘The europium emission is more readily quenched or “turned off” in the presence of H2O compared to terbium. Since the vibrations in D2O are different due to its mass, it isn’t as good at turning off the europium emission, which gives us the yellow emission colour in the presence of D2O, versus just green for H2O.’

Dr Humphrey and Dunning’s new class of material could change the way authorities respond to chemical spills or leaks of radioactive waste. In addition, PCM-22 has the potential to streamline some of the processes involved in medical and research imaging that rely on nuclear magnetic resonance (NMR) technology. NMR machines require heavy water to function and to work properly, and this heavy water needs to be very pure. However, heavy water can easily be contaminated with normal water from moisture in the air.

‘When you buy heavy water from a manufacturer it starts out ultrapure,’ says Dr Humphrey. ‘But as soon as you unscrew the bottle, hydrogen atoms from the air start swapping with deuterium atoms. A week later, all of the Hs have become scrambled with the Ds and it effectively ruins the heavy water. It’s an exchange that you can’t stop.’

Dipsticks coated with PCM-22 could provide a cheaper and far quicker way of assessing the purity of heavy water, with the material being sensitive enough to detect H2O concentrations as low 10 parts per million in a D2O solution.

With UT Austin’s Office of Technology Commercialization already beginning work to license the team’s technology to companies, it is hoped that PCM-22 sensors will be available in the near future to revolutionise the way we go about identifying different solvents including heavy water, whether it’s to clean up a chemical spill or to optimise MRI scanners. 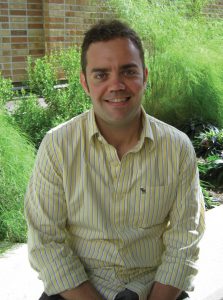 Dr Simon Humphrey is an Associate Professor at the University of Texas at Austin. He obtained his PhD at the University of Cambridge in 2005 under the supervision of Paul T. Wood, in the field of magnetic and porous coordination polymer synthesis. Dr Humphrey later worked as a US Department of Energy Postdoctoral Research Associate at the Lawrence Berkeley National Laboratory (2005−2007) in the field of nanoparticle catalysis. After undertaking a Fellowship at St John’s College, Cambridge in 2006, he later joined the Faculty at the University of Texas at Austin in 2009. The Humphrey group is engaged in research into porous phosphine-based frameworks as well as the reproducible preparation of noble metal nanoparticles for applications in heterogeneous catalysis. 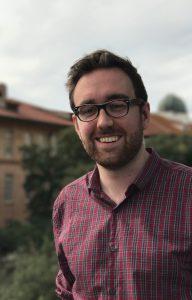 Sam Dunning graduated with a Master’s degree from the University of Sheffield in 2014, where he worked with Dr Michael Morris studying nickel bis(dithiolene) complexes. Upon graduating from the University of Sheffield he joined The University of Texas at Austin to undertake his PhD studies. His research in the Humphrey group centres on the synthesis of luminescent phosphine coordination materials (PCMs) for solvent identification and trace water detection. Recently his research has shifted to focus on single-crystal-to-single-crystal metal incorporation in new, pillared PCMs.