It is not completely clear why some smokers go on to develop cancer and others avoid it despite having smoked all their lives. Cigarette smoking is extremely addictive and the leading cause of fatal cancer globally. There are currently 38 million adult smokers in the US and one billion in the world. ‘While cigarette smoking causes up to 90% of all lung cancer, the largest cause of cancer death in the world, only 10–20% of lifetime smokers will get lung cancer,’ says Dr Stephen Hecht, a researcher at the University of Minnesota. Dr Hecht studies the chemical contributors to lung cancer in smokers in collaboration with a team of colleagues including Dr Sharon E. Murphy from the University of Minnesota and Dr Loic Le Marchand of the University of Hawaii Cancer Center.

Currently, lung cancer risk is gauged largely by cigarettes smoked per day and the number of years the individual has smoked. This leads to older rather than younger smokers being more likely to be screened. It would be useful for doctors to be able to determine how likely a younger smoker is to develop lung cancer, so that the disease may be prevented or treated at an early stage.

Nicotine is the main addictive substance in cigarettes. Although nicotine does not itself cause cancer, the cigarette is a terrible nicotine delivery device because it generates multiple carcinogens – substances capable of causing cancer in the body – that are inhaled along with the nicotine

During metabolism, the body uses specialised proteins – enzymes – to breakdown cigarette smoke constituents into more readily excreted molecules called metabolites. In the eyes of researchers such as Dr Hecht, these metabolites would be a better way to gauge who is at risk, as they could be measured in the blood or urine and used to predict the outcome of disease.

‘While cigarette smoking causes up to 90% of all lung cancer, the largest cause of cancer death in the world, only 10–20% of lifetime smokers will get lung cancer.’

Potential biomarkers, or metabolite predictors for lung cancer, might include carcinogens, or their cancer-causing breakdown products, as well as carcinogen DNA adducts – cancer-causing chemicals bound to segments of DNA. In their most recent research, the team of collaborators used biomarkers of carcinogen exposure and metabolism of nicotine to investigate the mechanisms underlying the racial differences in lung cancer risk.

Racial Groups Differ in their Risk for Lung Cancer

It is well established that the lung cancer risk of smokers varies by ethnic or racial group. In the mid-1900s it was noticed that Native Hawaiians experienced a greater rise in lung cancer deaths than other ethnic groups after the introduction of manufactured cigarettes. 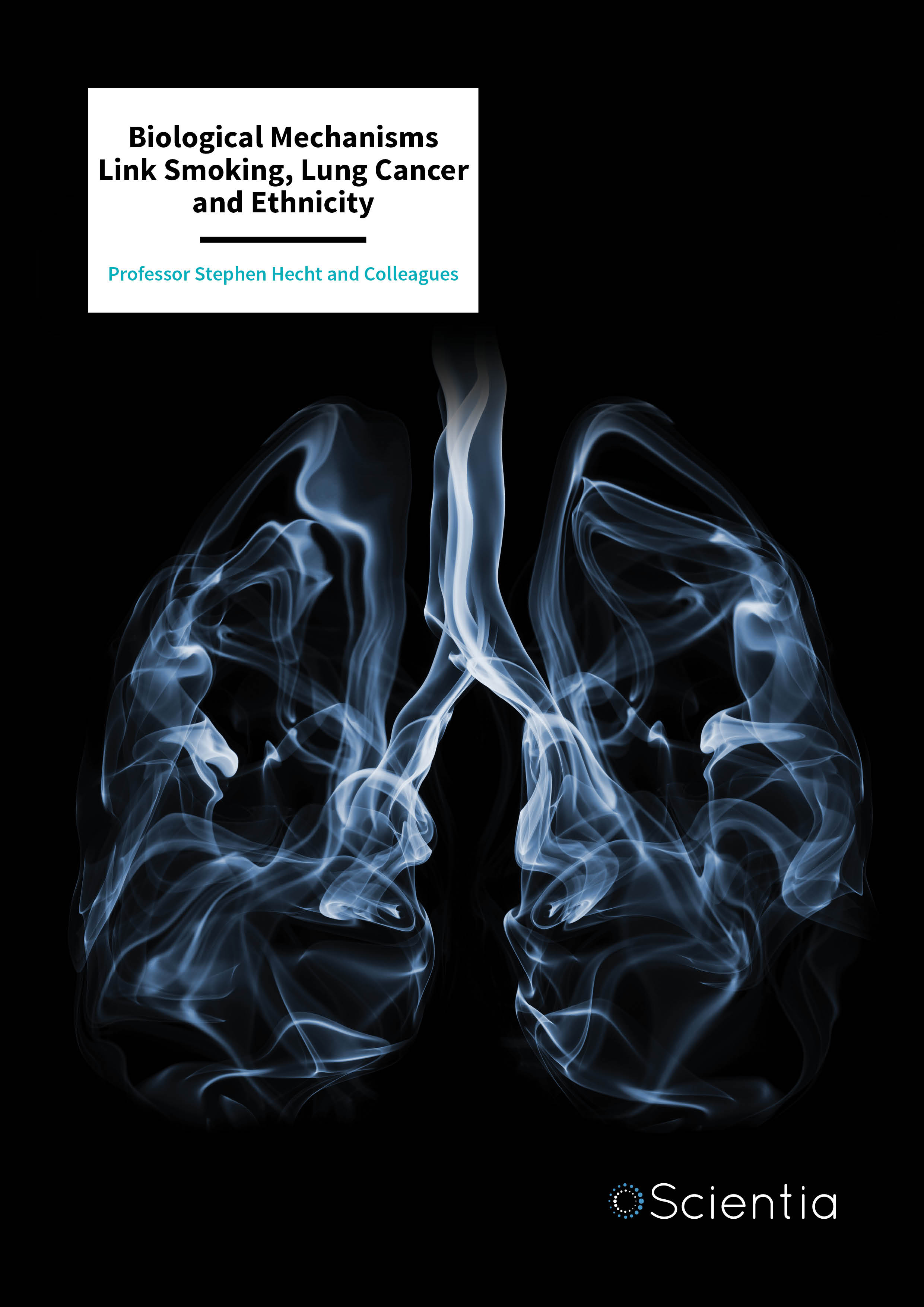 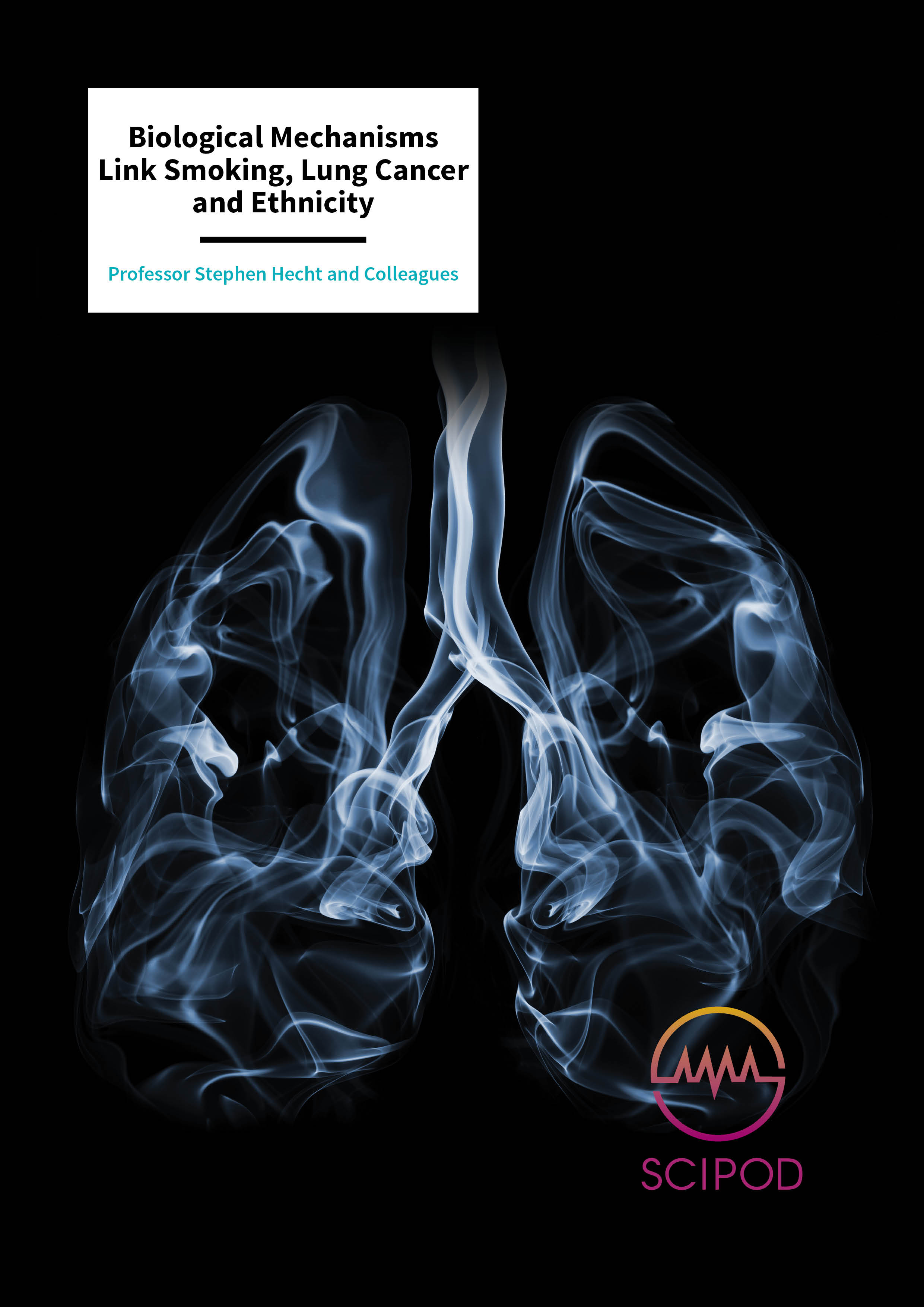 A study started in 1993 at the University of Hawaii Cancer Center called the Multiethnic Cohort Study followed hundreds of thousands of individuals over many years. This study found that the highest rates of lung cancer occurred in Native Hawaiians and African Americans, followed by Whites and Latinos, and even lower rates in Japanese Americans and Asians. These risk patterns could not be explained by the type of cigarettes smoked, levels of inhalation or diet. After additional studies, it was found that exposure to chemicals in cigarettes occurs to different extents in different ethnic groups. 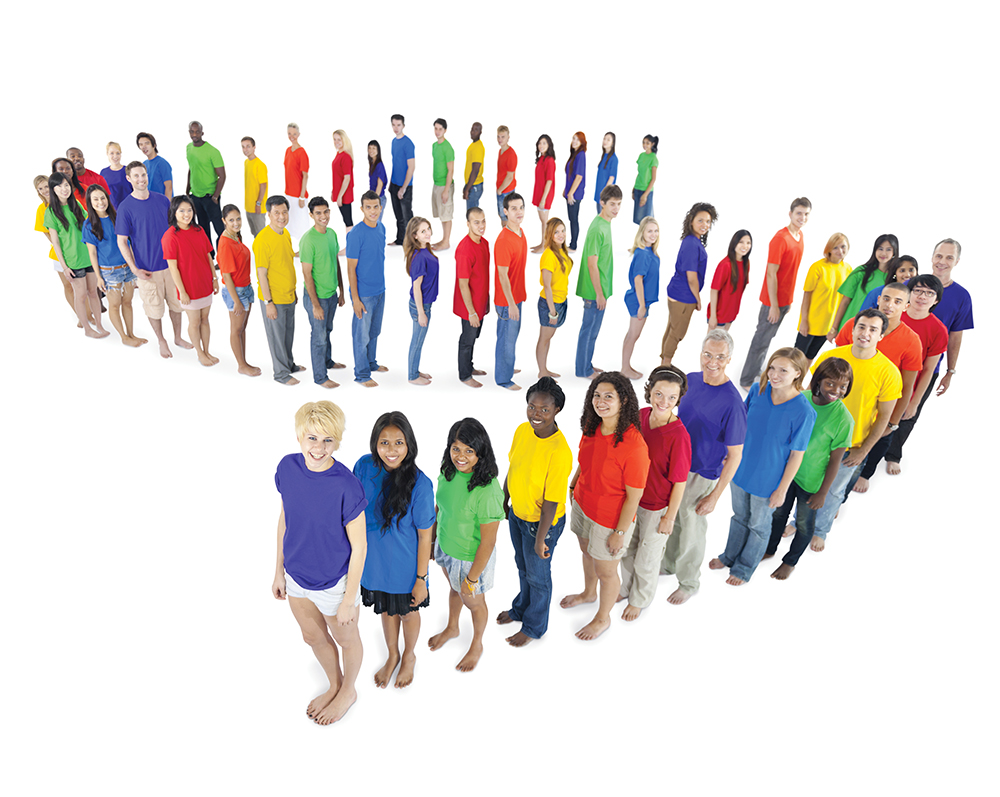 Nicotine is metabolised by three main pathways in the body. The primary pathway for the breakdown of nicotine is called the C-oxidation pathway, whereby nicotine is broken down into the chemical cotinine by the enzyme CYP2A6. Cotinine is further metabolised to the molecule trans 3′-hydroxycotinine (3-HCOT), a reaction that is also mediated by CYP2A6.

The other two pathways produce the metabolites nicotine N-oxide and molecules called glucuronides. Nicotine, cotinine, 3-HCOT and their glucuronides plus nicotine N-oxide are collectively referred to as Total Nicotine Equivalents, or TNEs, and can all be identified and measured in urine. Other chemicals present in tobacco smoke include carcinogens such as nitrosamines, polycyclic aromatic hydrocarbons (PAH), 1,3-butadiene and compounds such as formaldehyde, acetaldehyde and acrolein. 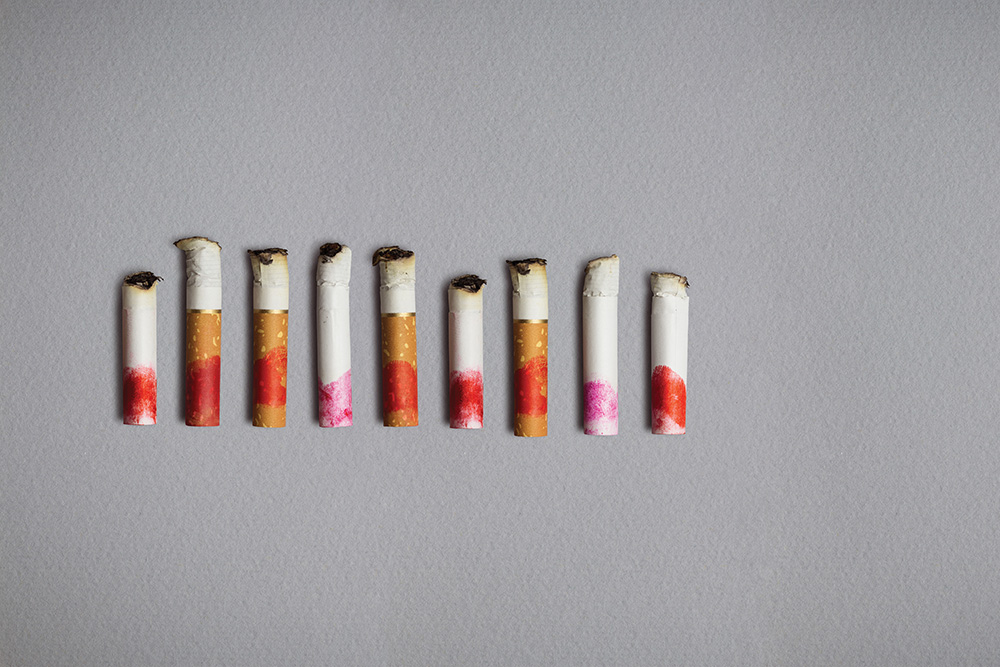 More than 50 variants of CYP2A6 have been identified in humans. Certain forms of this enzyme in Japanese Americans have been demonstrated to break down nicotine at much slower rates, leading to more unchanged nicotine in the body, and a decreased necessity to draw more nicotine from each cigarette. This in turn leads to lower carcinogen exposure and lower rates of heart and lung disease.

When reviewing the evidence, Dr Hecht’s team found that the higher risk for Native Hawaiians and the lower risk of Latino smokers for lung cancer could not be explained by differing extents of exposure to nicotine and carcinogens. They hypothesise that genetic differences might play a role in the varying rates of lung cancer in these groups.

Numerous compounds in tobacco smoke are known to be carcinogens and their metabolites have been found at different levels across ethnic groups. Dr Hecht’s team determined that Total Nicotine Equivalents (TNEs) in the Multiethnic Cohort Study were significantly higher in African Americans than in Whites, and significantly lower in Japanese Americans than in Whites. However Native Hawaiians had lower urinary TNE levels than Whites and Latinos.

NNAL is a potent lung carcinogen in rats and mice and is a urinary metabolite of a chemical called NNK – itself a tobacco-specific lung carcinogen. By investigating the smokers in the Multiethnic Cohort Study, Dr Hecht and his team found that the total NNAL in urine was consistent with the levels of TNE.

Two other compounds found in the urine, SPMA and MHBMA, which are the breakdown products of benzene and 1,3-butadiene, respectively, had levels that were highest in African Americans, intermediate in Whites, and lowest in Japanese Americans. The team noticed that both of these compounds are strongly influenced by differences in levels of an enzyme called GSTT1, with lower levels of the protein in those with zero or one copy of the gene compared to two copies. Japanese Americans tend to have fewer copies of the gene than other ethnic groups, and this was taken into account in the comparisons of SPMA and MHBMA in the ethnic groups.

The biological markers for the carcinogens NNK, PAH, 1,3-butadiene (MHBMA), and benzene (SPMA) were highest in African Americans, at intermediate levels in Whites, and at their lowest levels in Japanese Americans, similar to the TNE data and their relative risks for lung cancer. Native Hawaiians and Latinos followed the pattern of the TNE and NNAL data.

The team noticed that the metabolites of exposure to acrolein and crotonaldehyde (3-HPMA and HMPMA) did not follow this pattern, as the highest levels were found in Whites and Native Hawaiians, with lower levels in African Americans, Japanese Americans and Latinos. Acrolein and crotonaldehyde are not carcinogens, but both are toxic compounds which produce inflammation and other effects important in carcinogenesis. 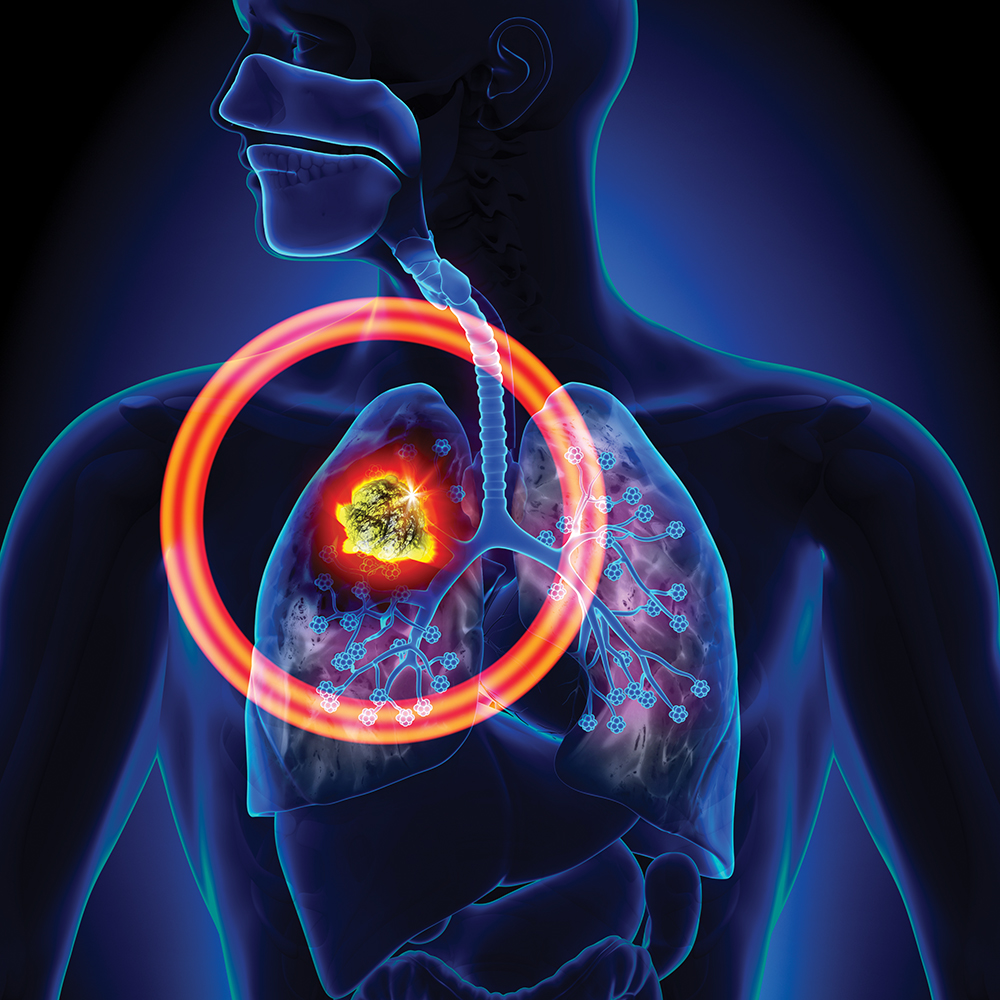 The field of epigenetics concerns itself with the addition or deletion of key molecular groups on specific areas of genes, a phenomenon that can alter the activity of a gene. One common epigenetic modification of DNA is called methylation. Methylation of specific sites on DNA called CpG sites is one of the most commonly studied epigenetic modifications and occurs when a methyl group – a carbon atom attached to three hydrogen atoms – is attached to a site on the DNA chain.

Smoking has been shown to cause high rates of DNA methylation, and the team hypothesises that these regions of DNA may serve as long term markers of lung cancer risk and help identify the genes involved in lung cancer development. Methylation of CpG sites in smoking-related genes has been shown to be associated with cancer risk in some studies. More research is needed, however, as studies of methylation across ethnicity remain sparse.

The study team is collaborating with other researchers who have collected blood or urine samples from large numbers of smokers over decades. The group is planning further studies to determine if smoking-related DNA methylation sites can be used to predict the risk of lung cancer.

Further investigations into the impact of smoking dose, intensity and duration on the epigenetic makeup of smokers (the epigenome) are needed. With the development of new techniques in the field of epigenetics the team expects new methylated CpG sites to be identified. This could provide additional knowledge on the impacts of smoking on the epigenome and identify genetic regions suitable for prediction of smoking-related lung cancer. 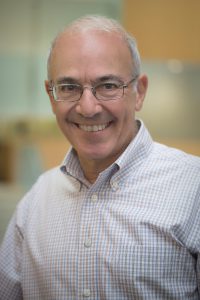 Dr Stephen Hecht is a Professor in the Department of Laboratory Medicine and Pathology and a member of the Medicinal Chemistry and Pharmacology graduate programs at the University of Minnesota in Minneapolis. From 1997 until 2014 he was head of the Carcinogenesis and Chemoprevention Program at the Masonic Cancer Center. Dr Hecht received his PhD in organic chemistry from the Massachusetts Institute of Technology in 1968, where he also did his postdoctoral work. From 2013 until 2017, he was the editor-in-chief of the journal Chemical Research in Toxicology. He is an expert on cancer-causing agents in tobacco products and his current research focuses on understanding the ways compounds in tobacco smoke cause cancer by studying how they enter the body, are metabolised, and cause mutations in human DNA. 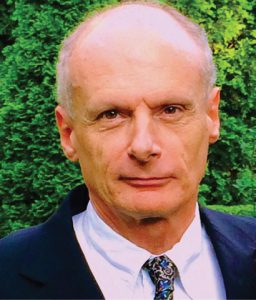 Dr Loic Le Marchand is Professor of Population Sciences in the Pacific Program and a researcher at the University of Hawaii Cancer Center. His research interests include the interaction between genetic and lifestyle factors that underlie the differences in cancer risk among different ethnic and racial groups in Hawaii. He is carrying out research aimed at understanding the causes of cancer and the development of new prevention measures. He has played a key role in the Multiethnic Cohort study, which has collected detailed information on thousands of people to investigate the differences in lung cancer associated with smoking in different ethnic groups and the potential risk factors or mechanisms behind this. 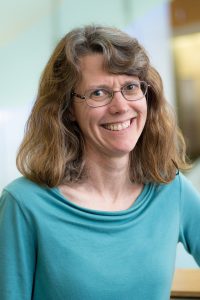 Dr Sharon E. Murphy is Professor of Biochemistry, Molecular Biology and Biophysics in the University of Minnesota Medical School. She received her PhD in Chemistry from the University of Colorado, Boulder in 1982. Her research interest in tobacco related carcinogenesis began at the American Health Foundation and she joined the faculty at the University of Minnesota in 1996. Her research is focused on characterisation of the activation and detoxification pathways of nicotine and tobacco carcinogens and the role this plays in the development of smoking related cancer.