Drs Stephen Laubach, Jon Olson and Rob Lander and their team at The University of Texas at Austin are investigating the relationship between growth of fractures in rock, and chemical processes that occur within and around fracture openings. They are working to construct reliable models that predict how fracture patterns develop deep in the Earth. This builds an understanding of the paths that fluids travel deep underground, which is valuable to industries that extract resources contained within rocks, and to those that store waste materials underground.

The Problem with Cracks

Under the Earth’s surface lies thousands of metres of rock layers. Many deeply buried rocks contain fluids that are mobile primarily through fractures. As petroleum resources become scarce and more waste must be stored underground, fractures have been drawing increasing attention from researchers. Scientists ask, ‘how do fractures form?’ and ‘how can we better predict their spatial patterns?’

Structural geology is a broad field encompassing how rocks deform, including how they fracture. It’s widely understood that fractures form in response to loads arising from burial and tectonic plate movements. Fracture is a mechanical process, and for decades increasingly sophisticated models based on fracture mechanics guided predictions of fracture patterns. However, Dr Stephen Laubach and his team at The University of Texas have demonstrated that chemical processes may be equally important. Combining mechanics and chemistry, the discipline of structural diagenesis brings these two viewpoints to bear on the problem.

The Subsurface – the Hidden Plumbing

Of course, to study fractures, it helps to have actual examples. As it turns out, this is easier said than done. Geoscientists sample the subsurface with wellbores that can extract lengths of rock core that are about as wide as the fist of a large person’s hand. Fractures are narrow, perhaps only a few millimetres wide, but may be hundreds of metres long and just as far apart. The wide distances between fractures, compared to the narrow dimension of rock that can be sampled, leads to a profound sampling challenge.

Engineers know that fracture plumbing is present because deep wells – many kilometres down – occasionally encounter the fracture ‘pipes’. These interactions are often marked by the sudden appearance or disappearance of fluid. But just as it would be hard to understand the plumbing of your house by boring a single ten-centimetre diameter tube through the roof into the basement, the plumbing of deeply buried rocks is concealed by the inherent sampling problem. The sampling problem for fractures is so acute that in most cases observations are inadequate for practical purposes. 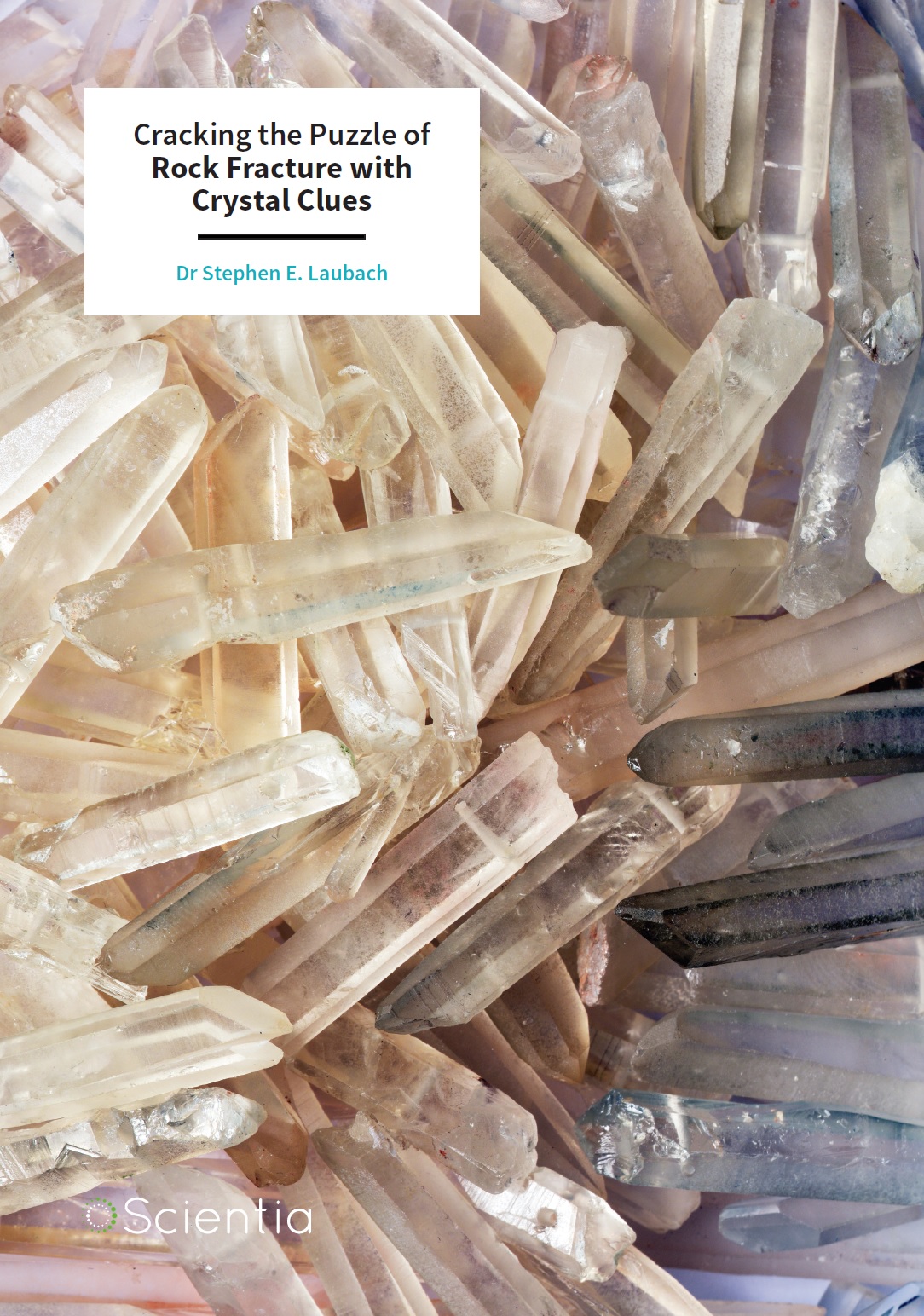 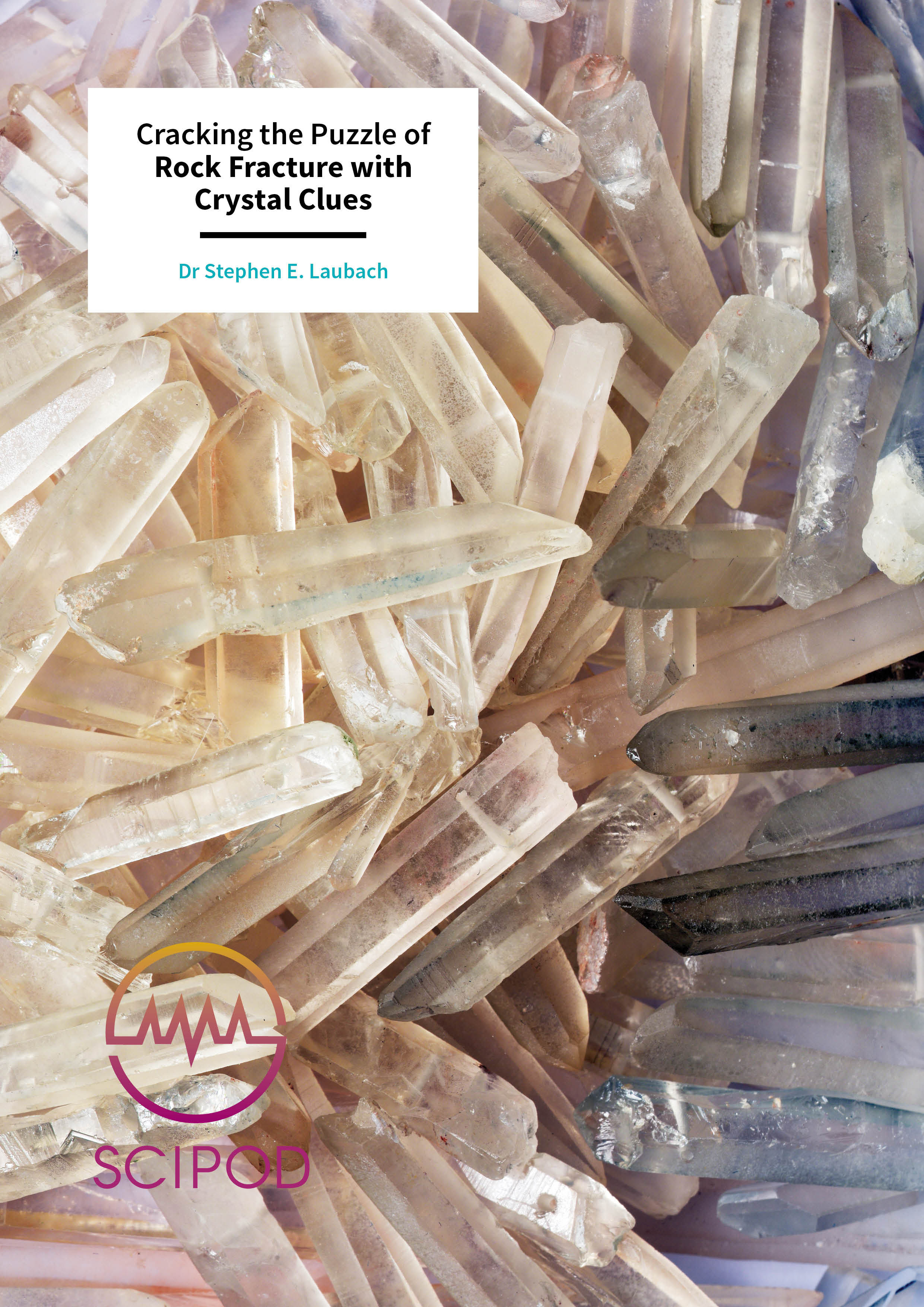 Why the Solution is to Make the Problem More Complicated

The challenges of thoroughly sampling fracture systems has limited scientists’ observations and understanding. Any insights obtained from samples therefore need to be extended with predictive models. Ideally, such models would produce predictions that can be verified with the limited samples of fractures that are typically available to scientists.

Over millions of years, gradual shifts in the Earth produce fractures. Typical ‘loads’ that can cause fractures to form are well known. These include gradual strains accumulating from plate tectonics, local loads associated with folding and faulting, and ‘loads’ associated with elevated pore-fluid pressure, which can arise from the same temperature-driven process that convert organic-rich sediments into petroleum. Recently, however, researchers have become increasingly aware that the path to better models is obstructed by a fundamental conceptual problem. Fractures, individually, are too simple.

The problem of individual fractures being too simple is an example of the principle of equifinality, where a given end state – a fracture, for example – can be reached by many potential means, such as a wide range of loading paths. From a mechanics point of view, fractures grow by their walls moving apart and their tips extending into the rock. Based on their shape there is little difference between the fracture in rock caused by pressures associated with gas generation, and the crack in the windshield of your car, yet they form due to different loading paths and the pattern of the ensemble of fractures is likely quite different. Simple shapes record little information about why the fractures formed in the first place. Common types of fractures can form from multiple causes and exhibit no diagnostic relationship with the layers that contain them, or to the faults, folds, mountain building or hydrocarbon generation events that may have created them.

Whereas the shape of a single fracture gives few clues about its origin, different loads may create vastly different fracture patterns. For example, patterns caused by the pressures from natural gas generation could extend over wide regions while those caused by the strains associated with bending in a fold are likely to be localised in contorted parts of layers. These pattern differences would be useful to know.

Because the timing of processes like gas generation and folding can be independently determined using standard methods, choosing the appropriate model for predicting a fracture network would be considerably easier if fractures contained evidence showing when they formed. With timing information, a few samples might be sufficient to compare with the timing of gas generation or folding and to identify the right model.

Aside from being younger than the rocks in which they occur, none of the attributes of fractures that arise from purely mechanical processes record timing information. Thus, fractures would be easier to understand if they were more complicated! As Dr Laubach remarks: ‘Fractures are one of those problems that are so simple that they are really difficult… the more bizarre the crime, the easier it is to solve.’ 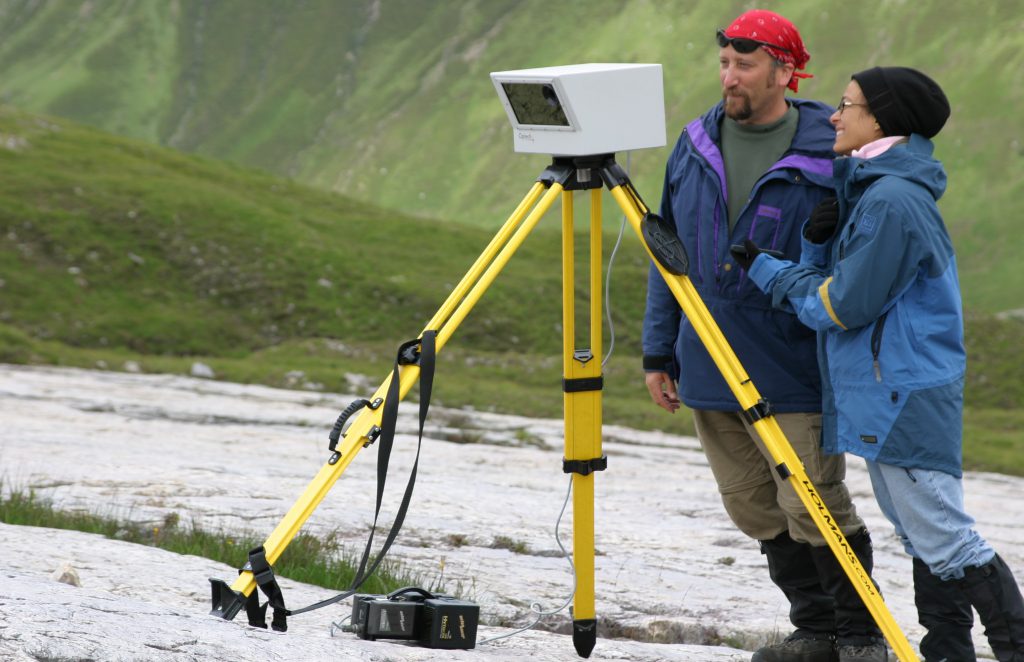 Dr Laubach and his colleagues have been addressing these difficulties by investigating fracture development in relation to the minerals found in fractures. Hitherto little appreciated, mineral cements that line or fill fractures are widespread. Although such mineral deposits are unsurprising, given that newly formed fractures are reactive surfaces in contact with hot, mineral-laden waters, the internal structures and shapes of these deposits are quite strange and are uniquely informative. These deposits are a key for unlocking accurate predictions of fracture patterns – they are the solution to eqifinality.

The group discovered that cements can form both during and after fracture opening. They observed minute, pillar-like ‘bridge’ deposits that appeared to form while fractures were opening. Within these bridges, complex textures record repeated cracking and resealing of the accumulating cement deposits. Deposits trap miniscule quantities of fluid with each sealing increment, of which there may be hundreds. From these fluid inclusion assemblages, the team could measure temperature, salinity and other chemical attributes of the water, and the presence and type of hydrocarbons. Overlapping and crosscutting textures allowed them to identify the sequence. Thus, using these deposits, the team could elucidate the timing, temperature and chemical history of the fractures.

To understand how the deposits formed, Dr Laubach’s group devised a model of cement accumulation in fractures, compared its predictions to the actual history. They found that their model was able to make accurate predictions, giving them confidence that cement accumulation patterns can be used to unravel the timing and rate of fracture.

The bridges within the fractures are like a genetic sequence, allowing the team to differentiate each fracture from all others. Using evidence from the deposits, the team could show when the fractures started to open, how fast they opened, and when they ceased opening. This type of evidence was then compared with geologic records of loading history and with the output of mechanical models, enabling the team to identify the causes of fracture patterns and validate pattern predictions.

Although mineral deposits may cause blockages, surprisingly, even over millions of years, some mineral deposits accumulate only minute veneers on fracture walls. The team’s model, along with natural examples, shows that because cement deposits initially accumulate very rapidly on only some parts of fracture surfaces, whereas on other surfaces cement accumulates slowly, bridges are surrounded by open fracture pore space. In other words, even though the fractures locally contain rich records of their opening histories in deposits that are continuous from one wall of the fracture to the other, for the most part, the fractures are open and are viable conduits for fluid flow. 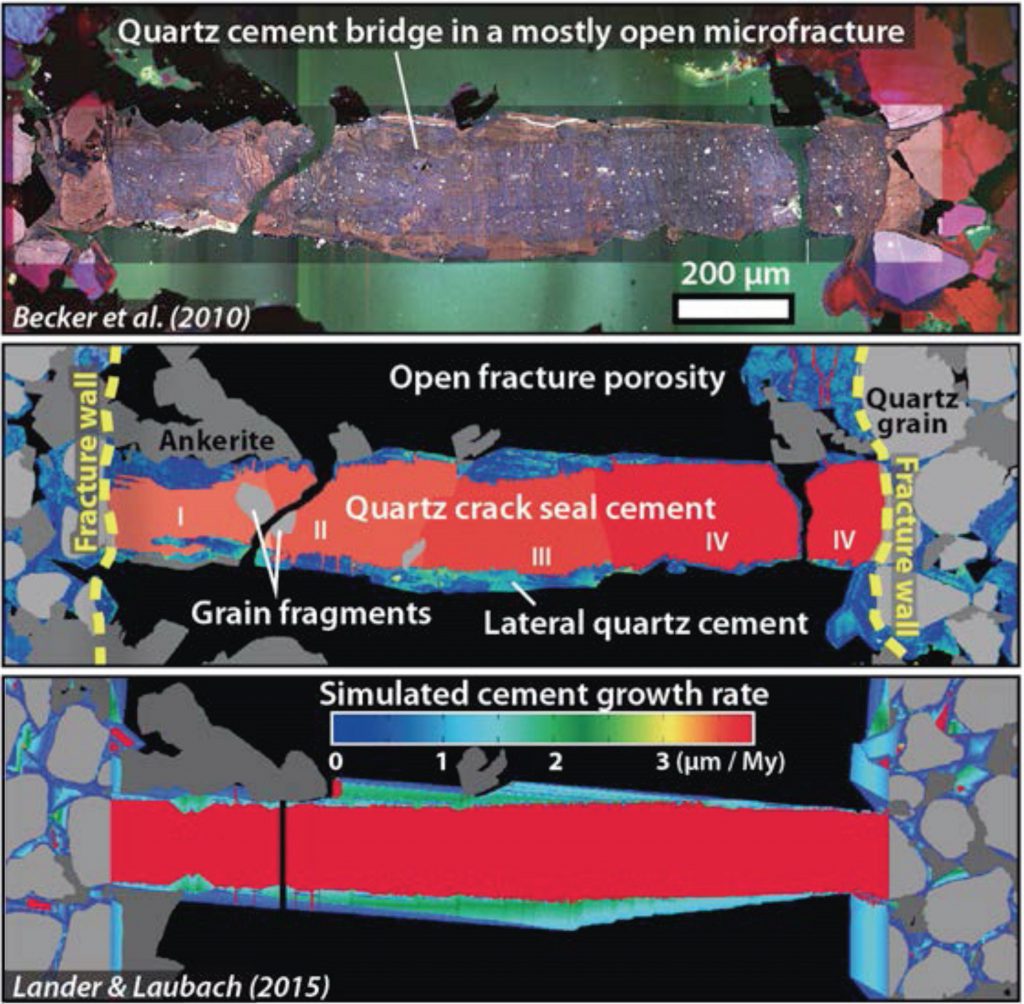 Everyday experience and engineering experiments show that the fracture process may occur over the very short time periods of human experience, but the team’s new research on the accumulation of cement deposits shows that many fracture patterns in the Earth grow in length and develop patterns over millions of years. These results have obvious implications for modelling and predicting fractures in the subsurface.

For example, the team found that in East Texas fractures began opening about 48 million years ago, and that some of these cavities continued to open slowly until recently and remain open to this day. This shows that fractures can, in fact, remain active and open for long periods of time.

While the size and abundance of fractures can tell us about the deformation rock has experienced, fractures can also interact with one another to initiate further activity and growth. They may grow in various directions, become inactive, or branch out and extend. The patterns of fracture size and clustering have marked effects on how rocks conduct fluid flow. Both mechanics and cement deposits affect these patterns.

Within their Basic Energy Science Project (from the US Department of Energy), the team is recreating how natural fracture patterns develop and comparing their results to patterns from models that account for both the mechanics and the mechanical effects of cement deposits. In addition to observing the size and spatial arrangement of fractures, across a variety of geologic formations and settings, they have had to develop new ways to quantify fracture spatial arrangement. Using these new methods, the team found that the growth of some sets of fractures is a self-organised process, in which small, initially isolated fractures grow and progressively interact, with preferential growth of a subset of fractures developing at the expense of growth of the rest. 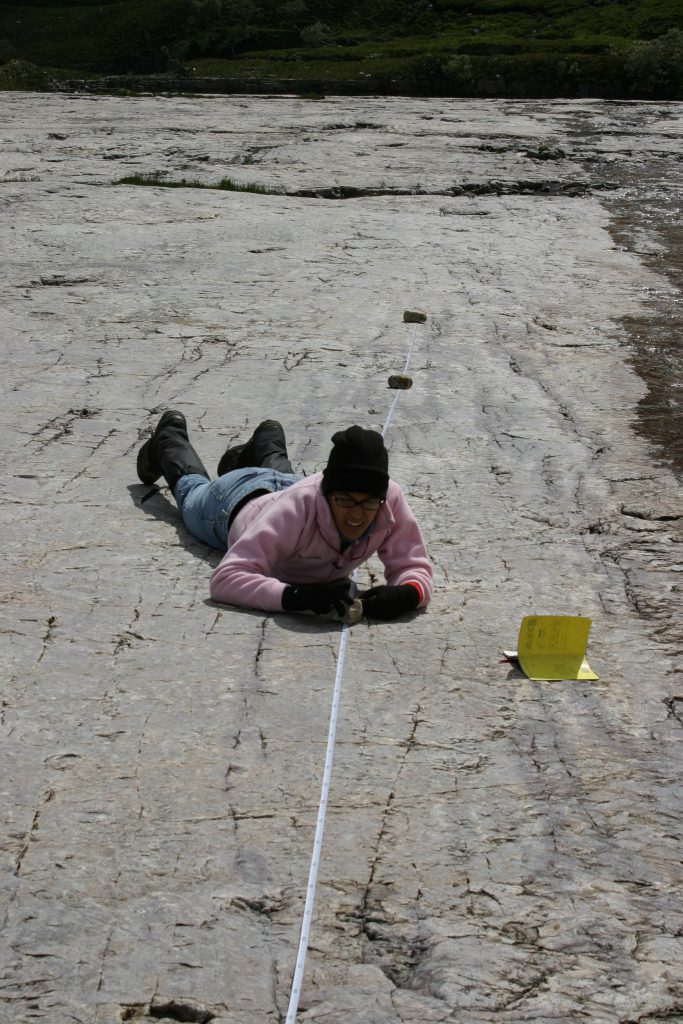 Dr Laubach and his team have shown that if we want to find out about the attributes of fractures deep in the Earth, it is worth considering the chemical processes that occur within fractures. They are working towards a unified model of mechanics and chemical change (diagenesis), to better understand how fractures develop under the Earth’s surface.

One benefit is that samples can be used to validate predictions of mechanical models that predict fracture patterns. Another surprising finding is that even under high-temperature subsurface conditions, fractures can remain open and act as conduits for fluid flow for millions of years. The incredibly slow growth rate of some fracture arrays is something that predictive models need to take into account. Furthermore, the increasing evidence that the cement deposits themselves can alter the type of pattern that develops points to the need for experimental and numerical modelling work to take this coupled process into account. The team’s work in this regard will help industries that need to extract substances from the ground, while also deepening our understanding of geological history. 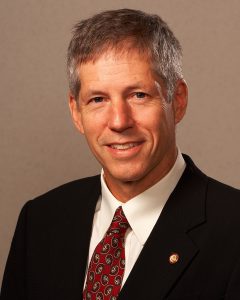 Dr Stephen E. Laubach gained his MSc and PhD in Geology at the University of Illinois-Urbana, after obtaining a BSc from Tufts University in 1978. Dr Laubach is now a Senior Research Scientist in the Jackson School of Geosciences at The University of Texas at Austin. Here, he investigates methods for fracture and stress characterisation, and researches structural diagenesis. This involves supervising graduate student research, and leading the Fracture Research and Application Consortium and the Structural Diagenesis Initiative. He is an active member of various societies – including the American Association of Petroleum Geologists (AAPG), where he served as Elected Editor, Distinguished Lecturer, and on the Executive Committee.