Net primary productivity, or NPP, refers to the amount of carbon dioxide that plants take in during photosynthesis, minus the amount released during respiration, resulting in final observable biomass. As carbon dioxide is the primary driver of climate change, having a full understanding of this process is now critical. However, until recently, global NPP and how it is affected by climate change were poorly understood. To obtain a complete picture of NPP and the factors that drive global changes, Dr Steven Running and his team at the University of Montana have been investigating satellite data from the past few decades.

Photosynthesis, which occurs inside all plants and certain microbes, is arguably the most important chemical reaction on Earth. In this process, a plant uses carbon dioxide, water and energy from the Sun, to create new plant material, producing oxygen as a biproduct. The carbon is stored by the plant as carbohydrate (sugars and starches), while oxygen is released into the atmosphere. In fact, photosynthesis creates most of the atmospheric oxygen and all of the food on Earth, making it responsible for the emergence of life as we know it.

Scientists can use this valuable NPP measurement to calculate how much carbon is being sequestered by plants. Accurate NPP values are vital for scientists who are trying to understand and predict the severity and effects of future climate change on the biosphere. As Dr Steven Running of the University of Montana says, ‘if NPP is degraded, atmospheric carbon dioxide would increase faster, and global warming would accelerate. Conversely, if humanity can enhance NPP it slows global warming down.’

Until recently, measuring NPP continuously on a global scale was not possible. Most previous estimates have been made by taking measurements of plant biomass from a small plot and extrapolating them to calculate global NPP. To obtain a more accurate picture, Dr Running started to work closely with NASA in the early 1980s, where he aided in the development of NASA’s Earth Observing System. This fleet of satellites has been monitoring the Earth’s land, oceans and atmosphere for 20 years. The Earth Observing System is at the forefront of Earth system science, helping scientists to understand the atmosphere, oceans and land surface as an integrated system. 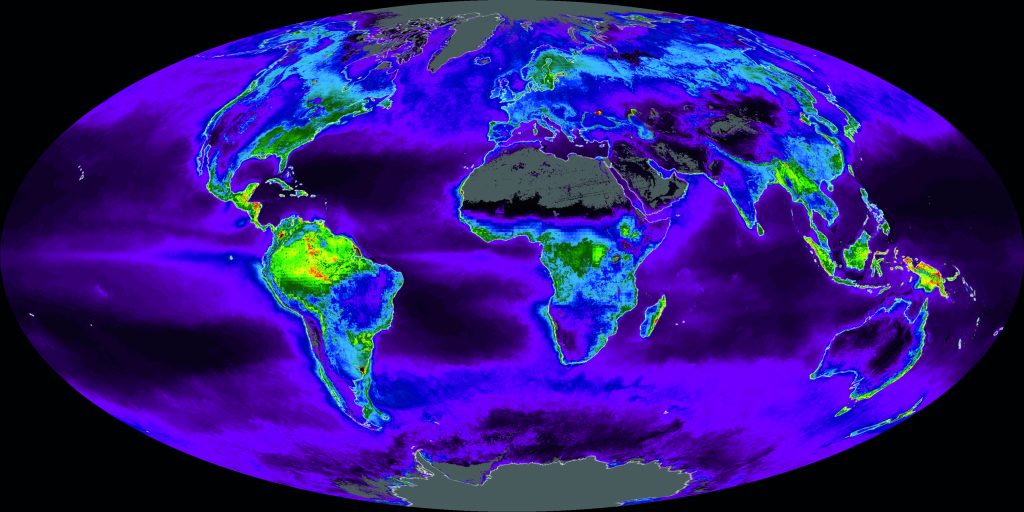 Monitoring on a Global Scale

The Terra and Aqua satellites are part of the Earth Observing System and are equipped with a Moderate Resolution Imaging Spectroradiometer (MODIS). MODIS measures the proportion of Earth’s land surface that is covered in vegetation and the reflected sunlight in special wavelengths. Dr Running and his team have developed an algorithm to calculate NPP from these measurements, along with daily climate data, creating a large dataset of continuous global NPP measurements.

The model assesses the amount of sunlight that can be absorbed by vegetation, along with the local weather conditions, to calculate the rate of photosynthesis, and therefore the amount of carbon dioxide that is being absorbed. During their early research, Dr Running and his colleagues identified various climate factors that limit the rate of photosynthesis and plant growth. The team found that water availability is the most important factor, followed by temperature and solar radiation.

Daily climate data is collected from the US National Centre for Environmental Prediction and combined with the vegetation measurements taken by MODIS. The team releases new NPP data every eight days, where it is used by various groups, including NASA, government organisations, many other countries and private landowners to aid in land management. Dr Running and his team have also combined earlier satellite records to monitor global NPP and how it has changed with climate since 1982. Their work has provided valuable insights into how NPP has changed over time, especially how it is affected by extreme climate events.

Climate records between 1982 and 2009 show that atmospheric carbon dioxide and global temperatures have steadily increased. Using earlier satellites to consistently monitor NPP and its response to changes in climate during this period, Dr Running and his colleagues discovered some interesting trends.

However, the long-term trends between 2000 and 2009 were not quite as reassuring. Despite continuously rising temperatures, global NPP appeared to decrease slightly, due to longer periods of drought. Dr Running wondered if this was simply a normal variation, or if it indicated a point after which NPP starts to decline due to more pronounced climate change. Only continued, long-term global monitoring can wholly answer that question. 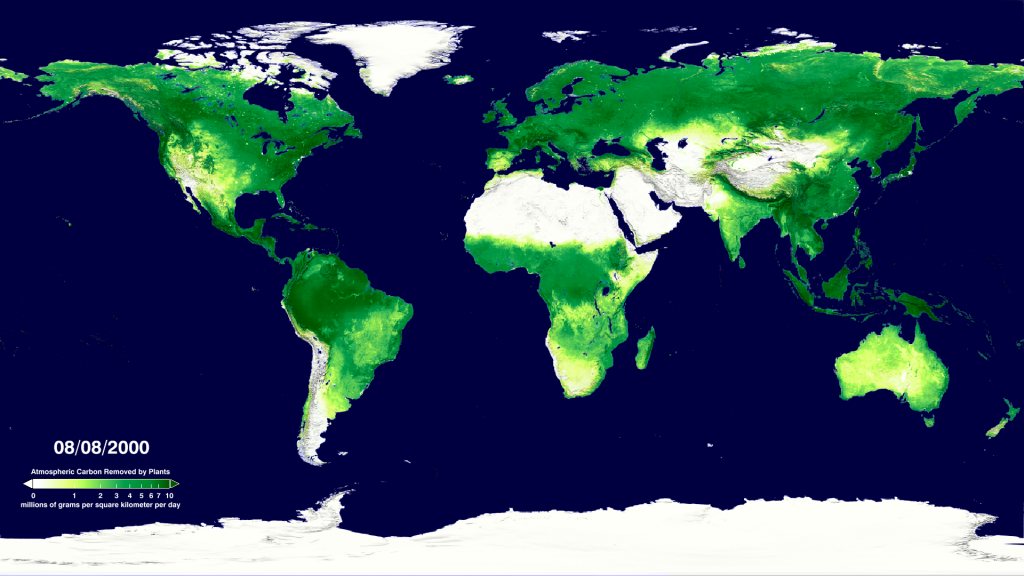 Relationship Between Climate and NPP

Next, Dr Running and his colleagues went on to measure the impacts of specific climatic events on NPP. They found that the 1991 eruption of Mount Pinotubo in the Philippines caused the NPP of high-latitude vegetation in the Northern Hemisphere to temporarily decrease from cooler temperatures. Three El Niño events between 1982 and 1998 also appeared to cause global NPP to temporarily decrease from drought effects, but not significantly enough to deviate from the overall rising trend during this time. Conversely a strong La Nina in 2011 increased rainfall so much that ocean sea level temporarily declined, and this rainfall caused NPP on land to increase.

The team’s long-term monitoring of NPP has helped them to understand how changes in climate can affect global NPP. For instance, rising temperatures increase growing season length, but decrease water availability, and many of the NPP trends that the team identified can be directly attributed to these effects. They showed how significant droughts between 2000 and 2009 caused the reduction in NPP in the Southern Hemisphere. Decreases in cloud cover increased sunlight over tropical areas causing the largest increases in NPP, particularly in the Amazon rainforest.

It initially appeared that rising global temperatures were having a positive effect on the growth of plants, potentially increasing their ability to act as a sink for excess carbon dioxide produced by human activity. However, the reduction in NPP from 2000 to 2009 from drought effects raises serious issues. If rising global temperatures reduce plant growth, the ability of vegetation to act as a carbon sink will be reduced, accelerating climate change.

Importance of NPP in Modelling

Our climate is changing rapidly, and the effects of these changes require incredibly complex Earth systems models to predict. These models require detailed information of vegetation cover and   trends in carbon sequestration. Dr Running and his colleagues can provide extensive NPP data that can be used to increase the accuracy of these climate models. Without accurate climate models, preparation of effective climate policies and meeting global food and energy requirements would be extremely challenging.

Monitoring NPP is not only essential for understanding the effects of climate change. The global population, currently at 7.5 billion people, is projected to rise beyond 10 billion by 2100. Feeding all these people is a moral imperative, yet this global NPP data does not show sufficient increases in crop production to meet these future needs.

Plant material is also a source of bioenergy – a renewable energy source such as wood, agricultural waste and specifically-grown energy crops, which is burnt for heating, cooking or electricity production. In the future, bioenergy could meet a proportion of our energy needs, as the carbon footprint is far lower than that of fossil fuels. However, our current estimates vary greatly due to unknown factors, such as the future availability and productive potential of land, which needs to be balanced with food production to feed the growing human population.

Using their extensive measurements of NPP, Dr Running and his colleagues investigated the maximum global primary bioenergy potential. The team calculated a potential bioenergy capacity that is four times lower than previous estimates and would require 55.6 million square kilometres of natural vegetation to be converted to bioenergy cropland – an area greater than Asia and Europe combined! The conversion of natural ecosystems to cropland is not only destructive to the environment, but would also significantly reduce the amount of carbon that can be sequestered. By 2050, the demand for global energy is predicted to double, but the team suggest that bioenergy can only meet less than 15% of our energy needs in a sustainable manner.

The Future of NPP Monitoring

Understanding and monitoring NPP is essential for maintaining land-based vegetation as a carbon sink and for food and bioenergy production. Modelling the movement of carbon and long-term changes to global ecosystems is complex and cannot be accurately completed without a clear understanding of NPP and how it evolves as the climate changes.

The NPP data that Dr Running and his colleagues provide is also vital for landscape management and planning. For instance, the team’s results could be used for determining the most sustainable use of grazing and rangeland. As wildfires and droughts become increasingly intense and widespread, MODIS also provides a way of monitoring both at-risk areas and how the vegetation recovers after a disturbance event. As the Earth’s climate continues to change, the team’s consistent monitoring of NPP will become an even more essential tool for understanding and mitigating damage caused to the biosphere. 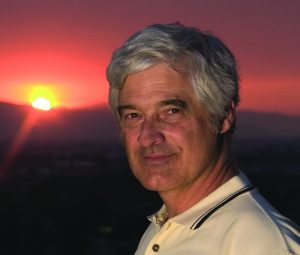 Dr Steven Running was awarded his PhD from Colorado State University in 1979, and has worked with the NASA Earth Observing System since 1982. He currently holds the post of Regents Professor Emeritus of Ecosystem and Conservation Sciences at the University of Montana and is Director Emeritus of the Numerical Terradynamic Simulation Group. Dr Running has been a Lead Author for the Intergovernmental Panel on Climate Change (IPCC) and the US National Climate Assessment, as well as chairing the NASA Earth Science Subcommittee between 2013 and 2017. He currently co-chairs the Committee on Earth Sciences and Applications from Space for the US National Academy of Science. His long and successful career has led to over 300 publications within his research field of ecosystem carbon cycles and global climate change.