Dr Wei-Chau Xie – Shaking Up the Physics of Vibration

Nuclear power plants may be some of the most secure structures in our society, but when subjected to earthquakes, they have the potential to cause major disasters. Dr Wei-Chau Xie of the University of Waterloo in Ontario, Canada, is now developing algorithms for testing computer models of these structures – analysing their properties as they are subjected to virtual seismic activity. His research has provided new insights into how nuclear power plants may be designed to withstand stresses resulting from earthquakes, protecting nearby populations.

When considering the issue of seismic activity, designers of nuclear power plants have needed to develop robust safety standards to prevent disasters from happening. Nuclear facilities around the world are designed to withstand earthquakes, and to shut down automatically during major events, in order to protect nearby populations and the environment. 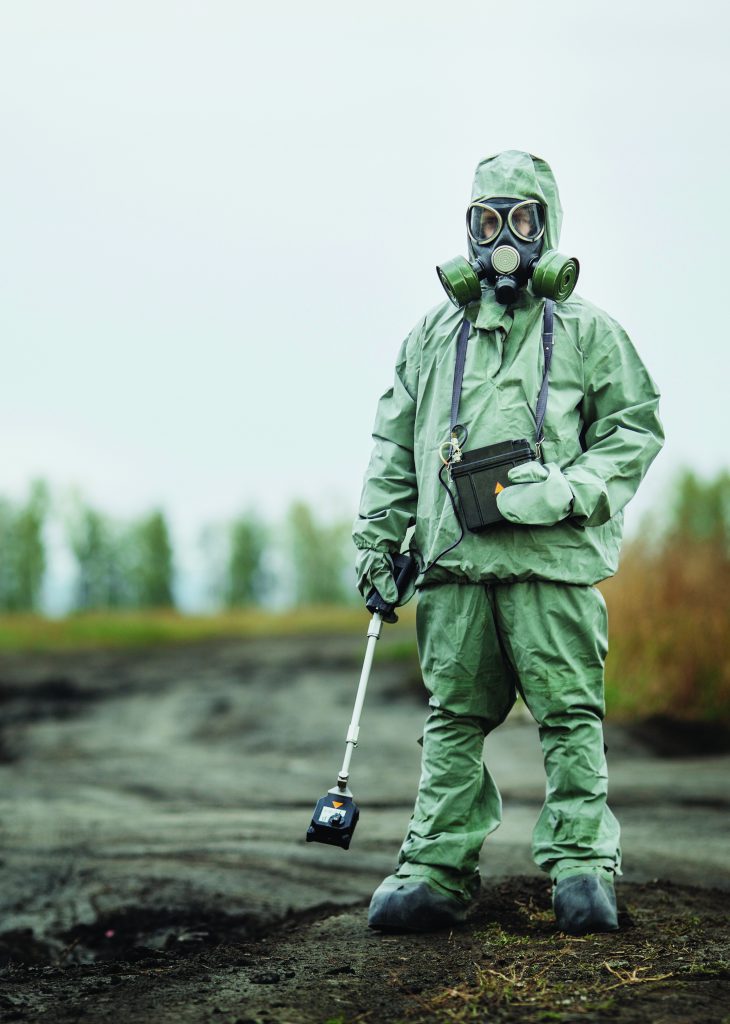 Different countries have various safety standards associated with the analysis, design and construction of nuclear power plants. In France, where 75% of the country’s electricity is generated from nuclear power, reactors are designed to withstand twice the force of the strongest earthquake expected to occur over 1,000 years for a given location.

Despite these precautions, disasters can still happen. For instance, on March 11th, 2011, the Great East Japan Earthquake, Tohoku, struck the island nation with a force measured at 9.0 on the moment magnitude scale. 11 nuclear power plants were shut down automatically following the earthquake. Unfortunately, 15-metre-high tsunami wave flooded the Fukushima nuclear power plants, resulting in severe damage in three units, meltdowns, and the release of radioactive materials into the environment.

These events have prompted governments, nuclear regulatory groups, and researcher teams across the globe to take a new look at how nuclear power plants are protected from forces of the natural world.

Dr Wei-Chau Xie and his colleagues at the University of Waterloo in Ontario, Canada, are one such team of researchers. They are currently studying how nuclear power plants and other critical infrastructures and facilities can be protected from earthquakes and other natural disasters. Dr Xie’s team employs a wide range of scientific disciplines in order to develop accurate estimates of different seismic hazards.

‘The objective of our research is to have a better understanding of the dynamic and stability behaviour of structures, and to provide methods for the reliability and safety analysis and design of structures, machinery, and engineering systems in general.’

‘The objective of our research is to have a better understanding of the dynamic and stability behaviour of structures and to provide methods for the reliability and safety analysis and design of structures, machinery, and engineering systems in general,’ Dr Xie explains.

Dr Xie and his colleagues are particularly interested in maintaining the safety of nuclear power plants. They conduct seismic risk analyses for various reactors, determining how earthquakes and other forces could affect nuclear power plants around the world. In each location, there is a unique set of conditions and engineering challenges that require customised solutions. 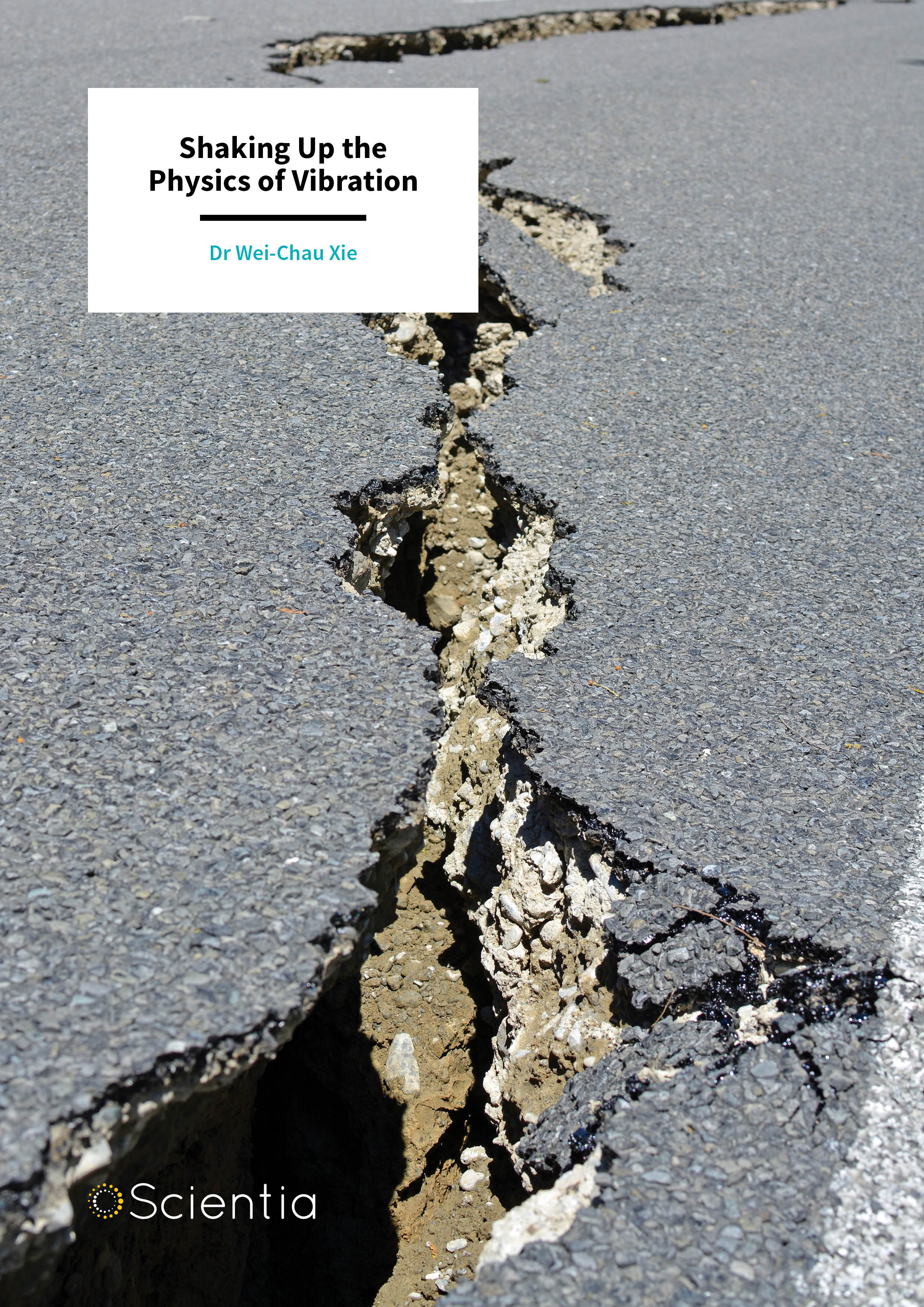 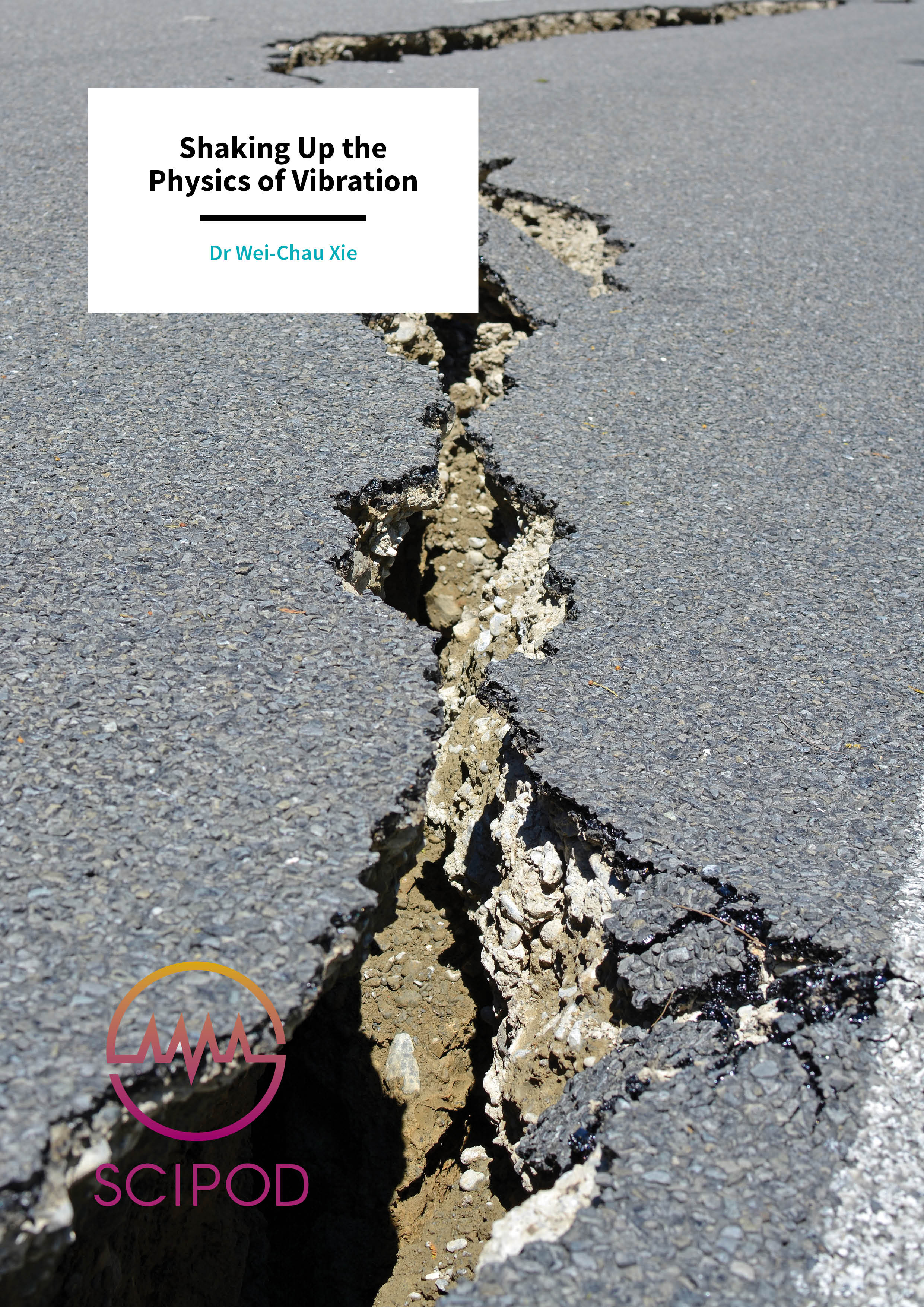 Modelling Disasters Before They Happen

Nuclear power plants have only been generating power since the summer of 1954, so the number of nuclear facilities to have experienced significant disasters is limited. This presents a challenge for Dr Xie’s team, as they have limited real-world data to use when creating their models. To develop methods to protect nuclear reactors and other facilities from natural disasters, the team uses various analytical and numerical methods in their analyses.

Dr Xie and his colleagues develop and refine analysis models and methodologies that are applied to predict exactly how vibrations will affect nuclear reactors in order to mitigate the damage caused by earthquakes and other events. Earlier computer models were either too simple for accurate predictions or too cumbersome for effective modelling. Since the 1970s, computer modelling has been used to predict how shaking of the ground could affect human-made structures.

One factor that Dr Xie’s team considers is the nature of the ground on which a reactor sits. Different types of material are present at each location and the depth of bedrock and soil layers can vary greatly. When earthquakes occur, the composition of the ground will display widely varying properties under the added strain, which will vary the motions the reactor makes as its foundations move. 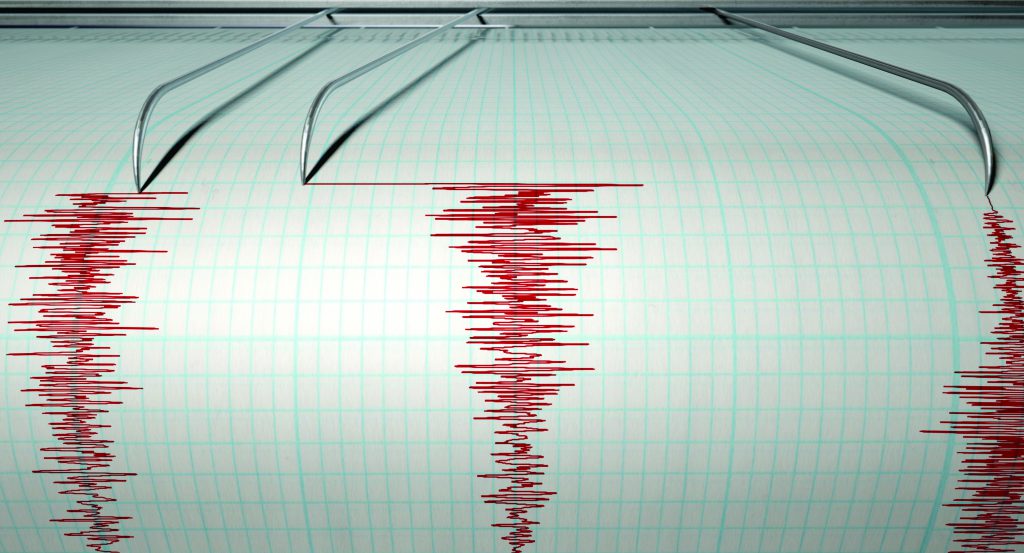 Another factor to consider is that motion must be considered in three dimensions. When the earth moves beneath a structure, motion occurs in three different directions: ‘forward and backward’, ‘left and right’, and ‘up and down’. This can produce rotational motions in addition to translational motions, an effect that Dr Xie and his team need to account for in their analyses.

Dr Xie and his colleagues spend a great deal of effort creating models and analysis methodologies that come closer to reflecting actual conditions during an earthquake.

The objective of Dr Xie’s research is to establish and improve a modern analysis framework for seismic risk analysis of nuclear power plants. To do this, his team studies four aspects of seismic risk.

For the first aspect, named ‘seismic hazard analysis’, the likelihood of a site to experience an earthquake of various magnitudes is determined. The second aspect is ‘seismic demand analysis’, where the dynamic responses of a structure experiencing earthquakes are examined.

The third aspect that the team examines is known as ‘fragility analysis’. This quantifies the probability that a structure or an equipment will fail or malfunction for a certain earthquake. Through ‘system analysis’, the fragility of the entire nuclear power plant, which is defined as the probability that a nuclear power plant will fail to safely shutdown during an earthquake, is determined.

Based on the results of these four analyses, Dr Xie and his colleagues are able to determine the seismic risk of a nuclear power plant in terms of core meltdown or large radioactive release. 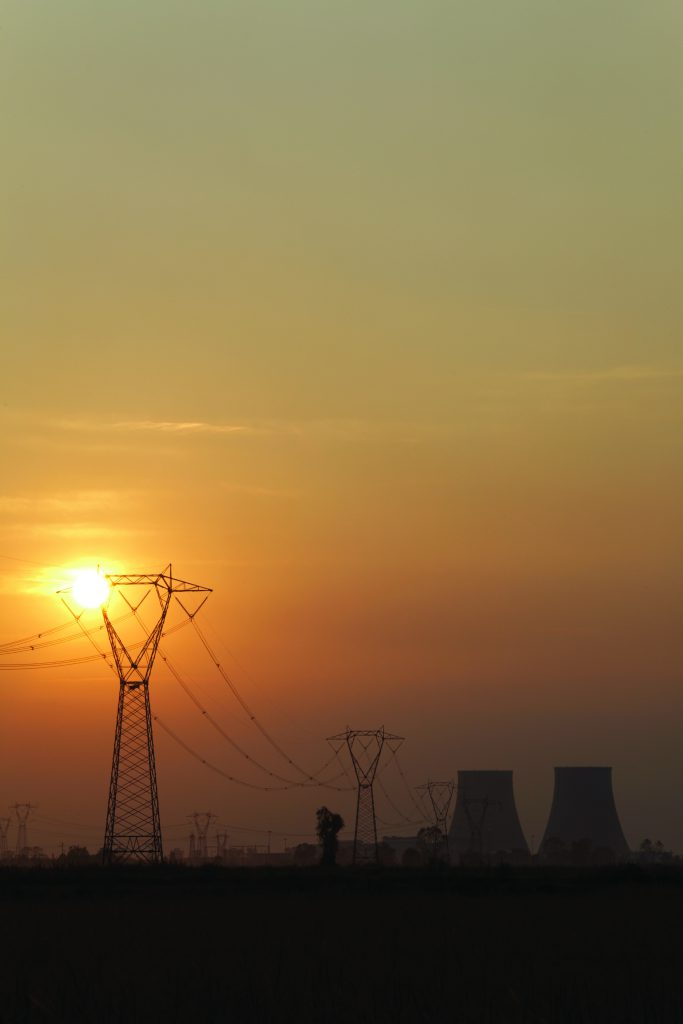 New Models for a New World

Dr Xie and other researchers who develop methods to protect nuclear power plants from earthquakes and other catastrophes face new challenges from global climate change.

‘Pavement infrastructure is experiencing unanticipated climate conditions due to global warming,’ says Dr Xie. ‘Extreme weather events, such as excessive precipitation, are increasing in intensity and frequency, leading to heightened concerns for pavement network vulnerability analysis, and maintenance and rehabilitation management. This is because previous designs based on historic climate may not be adequate for future conditions.’

In an effort to develop infrastructure capable of withstanding increasing environmental stresses associated with global climate change, Dr Xie is collaborating with Dr Susan Tighe of the University of Waterloo. Together, the pair is developing methods to mitigate water damage to pavement infrastructure during flooding caused by extreme weather events.

Dr Xie and his team are also working closely with other organisations, including Candu Energy, a Canadian corporation that operates nuclear reactors in five countries on four continents.

Currently, there are 447 nuclear reactors generating electricity around the world, with an additional 61 currently under construction. As nuclear power plants continue to evolve and proliferate, Dr Xie and his team will continue to refine their models, creating new and improved methods to ensure safety during earthquakes, floods, and other disasters. 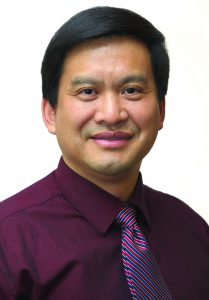 Dr Wei-Chau Xie is a Professor in the Department of Civil & Environmental Engineering at the University of Waterloo in Ontario, Canada. After earning a Bachelor of Applied Science from Shanghai Jiao-Tong University in China in 1984, he received his Master’s degree in Civil Engineering from the University of Waterloo in 1987, and completed his PhD in Civil Engineering there three years later. Dr Xie strives to make the world a safer place through his study on how vibrations damage structures, including nuclear power plants. He was the recipient of the Distinguished Teacher Award from the University of Waterloo in 2007 and was also awarded the Distinguished Performance Award six times, between the years of 1999 and 2013. In addition, Dr Xie was the recipient for the Doctoral Prize for Outstanding Doctoral Research from the Natural Sciences and Engineering Research Council of Canada (NSERC) in 1992. Today, Dr Xie teaches both undergraduate and graduate engineering courses, where he is beloved by his students.