CERN’s Large Hadron Collider (LHC) is the largest and most powerful particle accelerator ever constructed. Featuring a 27-kilometre ring containing superconducting magnets, the LHC can accelerate protons to almost the speed of light, forcing proton beams travelling in opposite directions to collide. The enormous energy released in these high-speed collisions recreates, for a very short time, the inconceivably hot conditions of the early universe. Under these conditions, heavy quarks can pop into existence, giving rise to unusual particles that can be picked up by the LHC’s detectors as they rapidly decay into normal matter. As one of the LHC’s seven detector experiments, the LHCb experiment explores what happened directly after the Big Bang that allowed matter to survive and build the Universe. On the 16th of March this year, the LHCb team announced the discovery of five previously unknown particles, all found in a single analysis. Each particle is a different type of omega_c baryon, composed of one ‘charm’ and two ‘strange’ quarks – heavy analogues of the ‘up’ and ‘down’ quarks that make up the protons and neutrons of normal matter. In this exclusive interview, we have had the pleasure of speaking with Professor Tara Shears, one of the scientists behind this unusually fruitful discovery.

Dr Nelly Berg, Scientia: Please start by telling us a bit about these five new particles and their characteristics.

Professor Tara Shears, LHCb Collaboration: These new particles are exotic types of particles called baryons, which is an object made of three quarks. Quarks are the building blocks of matter and come in six different varieties. Collections of the most ubiquitous ‘up’ and ‘down’ type quarks form neutrons and protons, the baryons contained in atomic nuclei. But the other, rarer quarks can form baryons too. Our discovery concerns baryons made of one ‘charm’ and two ‘strange’ quarks, known as ‘omega_c’ baryons. The first omega_c baryon was discovered a few years ago, but that left many more excited (more massive) partners to find. LHCb has discovered five distinct excited state partners, dramatically extending our knowledge of this particular type of particle. 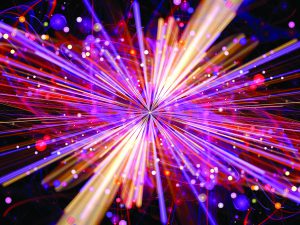 ‘You need a lot of energy to create an omega_c baryon, and they decay very quickly’

The new omega_c baryons are all formed of one charm and two strange quarks. What makes the particles different to each other is the configuration the quarks adopt inside them, giving different, characteristic values of quantities like angular momentum and spin to each new baryon. Each of the new baryon states also has a distinct value of mass, so unimaginatively we’ve included this in the name of each of them: the omega_c(3000), omega_c(3050), omega_c(3066), omega_c(3090) and omega_c(3119), where the number in the bracket is the baryon mass in particle physics units of MeV/c2 (a proton has a mass of 938 MeV/c2, for comparison).

Omega_c baryons exist for only a fraction of a second before decaying to other particles, so are quite hard to find. However, if you know the particles that omega_c baryons decay to and you can find them in your data, the task isn’t impossible.

Do these specific particles exist in nature, or only under the extreme-energy conditions of the LHC? Had they been previously predicted by theory?

We expected these extra omega_c baryons to be out there. They are predicted to exist by our Standard Model particle physics theory, but that doesn’t mean that predicting exactly where they exist is easy! So finding them is going to help us understand more about the forces that binds quarks together in baryons, and that is really valuable.

Having said that, you need a lot of energy to create an omega_c baryon, and they decay very quickly. So they only exist momentarily in high energy environments – whether those are LHC collisions, the high temperatures of the very early universe, or in high energy collisions of a cosmic ray with the Earth’s atmosphere or surface.

All five particles were discovered in a single analysis – how rare is it to find so many unknown particles all at once? Were you and the rest of the LHCb team surprised at this?

I hesitate to say that waiting to find a new particle is a little like waiting for a bus without a timetable, and not knowing when it will turn up, but in this case the temptation is too great to resist. It’s very rare to see so many new particles at the same time. Usually you concentrate on looking for one. It’s just that here the new particles had such similar properties, but were distinguishable, that they could all be found within the same data analysis and it was a case of find one, get four free.

Tell us a bit about the specialised capabilities of the LHCb detector, and how it detects particles of this kind.

LHCb is a superb piece of equipment and ideally suited to teasing out the traces of these new particles. For a start, it operates at the Large Hadron Collider and has access to the enormous datasets necessary to skim through to find traces of rare particles like these. Its particle detectors are designed to identify the experimental signature of shortlived particles, such as the omega_c baryon, in real time, allowing promising candidates to be selected and recorded. Other particle detectors identify the types of particles that the omega_c baryon decays to, allowing the full decay to be reconstructed and the omega_c itself to be identified. What’s unique about LHCb is that it has a unique, lower luminosity data taking mode at the LHC, and that allows us to study omega_c baryons with low backgrounds and high efficiency.

Explain what this new finding means for particle physics and quantum theory. Do you have any plans to probe these particles further?

We know that the strong force binds quarks together in baryons, and a description of how this works is contained in our Standard Model theory. However, the theory that describes the strong force is complicated and predicting exactly how quarks bind together is hard. These new measurements will help to refine that understanding. They will allow us not just to understand how quarks are bound in baryons, but potentially in more exotic types of particles containing four or five quarks too, particles that we are just starting to uncover in our data now.

Having seen these particles, now we want to know what they do, so I’m sure that a programme of omega_c baryon investigations will start. And our quest to understand the workings of the strong force will continue too, by probing the behaviour of quarks and the objects they form the constituents of, as precisely as we can.