On the 14th of September 2015 scientists at the Laser Interferometer Gravitational-Wave Observatory observed ripples in the fabric of spacetime for the very first time. These ripples, known as gravitational waves, arrived at Earth from a cataclysmic event in the distant universe. First predicted by Albert Einstein a century ago, this discovery marks the last remaining test for his theory of general relativity, and opens up a new window into our understanding of the cosmos.

The gravitational waves were picked up by the two LIGO detectors operating in unison – one located in Livingston, Louisiana, and the other in Hanford, Washington. Here, we have had the pleasure of speaking with Dr Kiwamu Izumi, a researcher working at the LIGO Hanford site, who tells us all about gravitational waves, the first day they were detected, and what the future holds for this new field of gravitational wave astronomy. 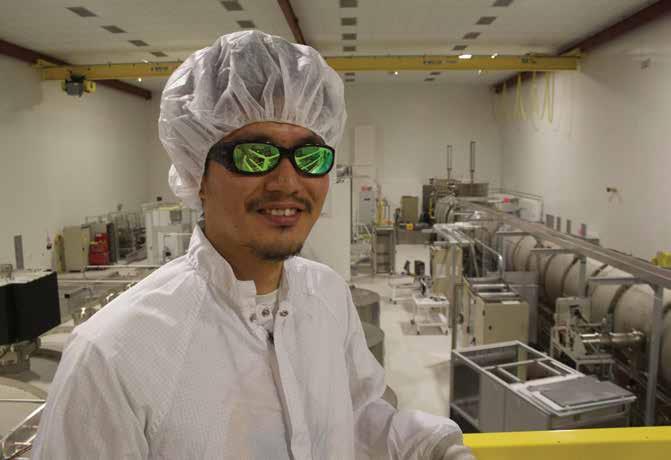 Please tell us about the day that gravitational waves were first detected. Did you immediately know that the signal was real?

The first gravitational wave signal, named GW150914, reached the earth at 2:50 AM on September 14th, pacific time. Several hours later, I woke up and drove in to the Hanford observatory as usual but did not know about the event. Then we had a site-wide meeting at 8:30 to discuss various things. However, interestingly, nobody talked aloud about the event that was detected in the early morning during the meeting although some of us already knew it by the alert and emails. So for me, it was one of those usual days until the mid-morning. After the meeting, one of my bosses came to my office and told my office mate, Sheila Dwyer, and me that there was an interesting candidate event in the early morning so we should immediately check the instrument status at the time of the event. I was not fully convinced whether the detection was real at the beginning. The official observation run had not even started although the instrument had been fully functional with high sensitivity. My initial thought was that it could be noise or a synthesised signal injected by someone for testing purposes. A number of people then spent hours in the afternoon to check the instrument status and confirmed that the instrument had been in a good shape.

What exactly are gravitational waves, and how they are generated?

So how do the LIGO detectors work? And how can they detect space-time deformations that are so infinitesimally tiny?

LIGO uses a laser interferometer to sense the distortion of space-time. It is essentially the same as the Michelson-Morley experiment in which light is split by a beam splitter and each beam is reflected back by a mirror to the beam splitter, resulting in an interference pattern in the light detected at the other side of the beam splitter. With such a setup, one can measure difference between the distances of two arms caused by the passage of gravitational waves. A key point is that gravitational waves induce strain in the arm lengths. This means that the longer the arm lengths are the greater the displacement in the arm lengths is. This is the reason why the LIGO interferometer has such a long arm length of 4 km. Ultimately the sensitivity should be limited only by fundamental physics such as quantum and statistical mechanics.

I was not fully convinced whether the detection was real at the beginning. My initial thought was that it could be noise or a synthesised signal injected by someone for testing purposes. 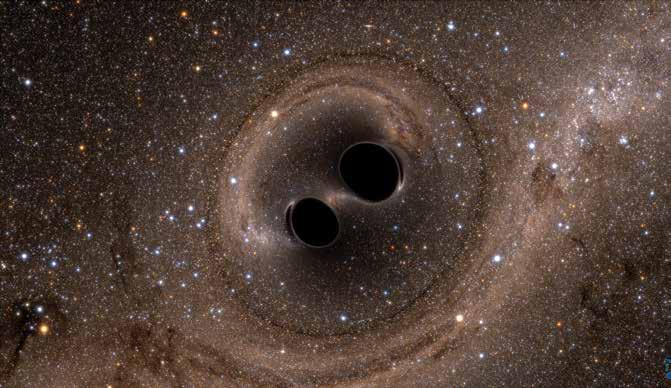 So far, two gravitational wave signals have been obtained. From analysing the data, how did the staff at LIGO know that black-hole mergers were responsible?

All that information is encoded in the observed waveforms. A system with two massive astronomical objects orbiting each other generates gravitational waves. The radiated waves exhibit almost a sinusoidal wave form, but with its frequency and amplitude increasing as the two objects keep approaching each other due to the system losing angular momentum and radiating it in the form of gravitational waves. If one looks at how fast the frequency evolves, the characteristic mass of the system (called chirp mass) can be determined – the more massive the system is the faster the frequency evolves. In the case of the first event, because the chirp mass was estimated to be 30 solar masses corresponding to a total mass of more than 70 solar masses, a system with a pair of neutron stars (each of which is typically 1.4 solar masses) is too light to explain the system. Another possibility, the system with a neutron star and a black hole, would not be able to reach such a small separation of 250 km without contact due to the fact that the size of the black hole would need to be approximately 1000 km in this case. Therefore, the only logical option is a pair of black holes whose masses are approximately 30 solar masses each.

Can the specific black-hole merger events that caused the signals be directly observed using other means, such as telescopes?

From astrophysical point of view, the merger of a pair of black holes is thought not to radiate electro-magnetic waves. In fact, a number of telescopes, for variety of wavelengths from radio wave to gamma ray, conducted follow-up observations but none of them found any obvious emission in the region where the gravitational wave sources might be located. Later, Fermi, a gamma ray satellite, reported a potential event coincided with the first event but the validity of this event is still under debate.

Why do gravitational waves propagate at the speed of light? What is so special about this value, and why can nothing travel faster than it? 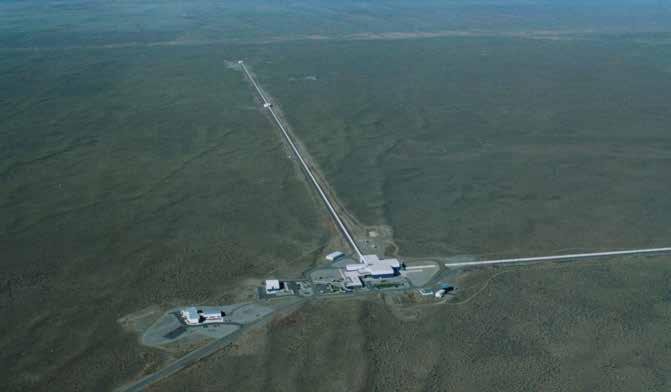 If gravitational waves can cause matter to squeeze and stretch as they pass through, how come they remain unaffected by matter? Surely this squeezing and stretching will lead to the wave losing energy?

Technically speaking, yes, gravitational waves lose the energy as they pass through matter. However, the interaction of gravitational waves with matters is extremely small and therefore the energy loss is negligible. This is actually the reason why their direct detection was so difficult. On the other hand, this makes gravitational waves special as an astrophysical observation tool because they are not affected by the matter that the waves encounter during propagation.

What does the finding mean for physics? Was this the final piece in the puzzle for the theory of general relativity, and is this finding compatible with the theory of quantum mechanics? 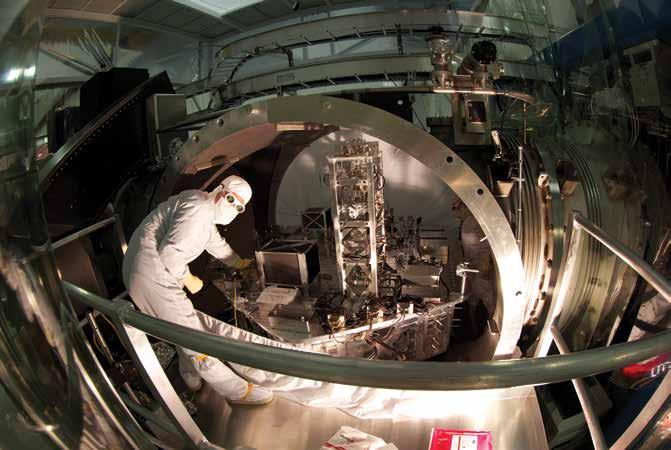 Now that we know that gravitational waves are a real and measurable phenomenon, what does the future hold for research at LIGO?

The first thing LIGO will do is bring the sensitivity as close as possible to the design sensitivity. This will increase the detection rate of gravitational wave events and improve the signal-to-noise ratio of individual events. As the sensitivity gradually improves in the coming years, LIGO will conduct two other observation runs. As more events are detected, we will be able to estimate the population of binary black holes more accurately and therefore shed light on the theory of the black hole formation in the universe. In addition, we will be able to detect systems involving neutron stars, for example, binary neutron stars. These systems will not only give us some insight to the interior structure of neutron stars, but also offer the opportunity for telescopes to look for associated electro-magnetic emissions which should convey a variety of astrophysical information. Other gravitational wave detectors around the world (such as VIRGO, KAGRA and LIGOIndia) will also come online in the coming years. These detectors together with LIGO will form a worldwide detector network to improve the sky localisation ability which is crucial to perform gravitational wave astronomy, a new branch of astronomy that has only just begun. 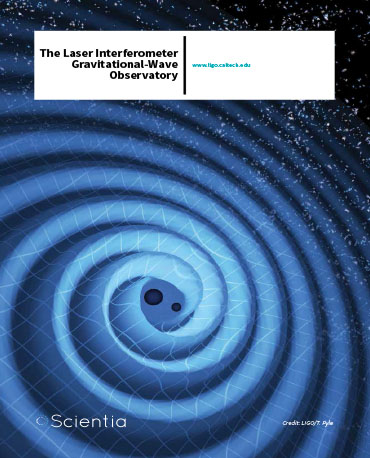